I'm sure you have a long list of Hive-Engine tokens which are too small to be worth the effort to do anything with them manually. Something like in the image below, with different tokens and amounts, of course: 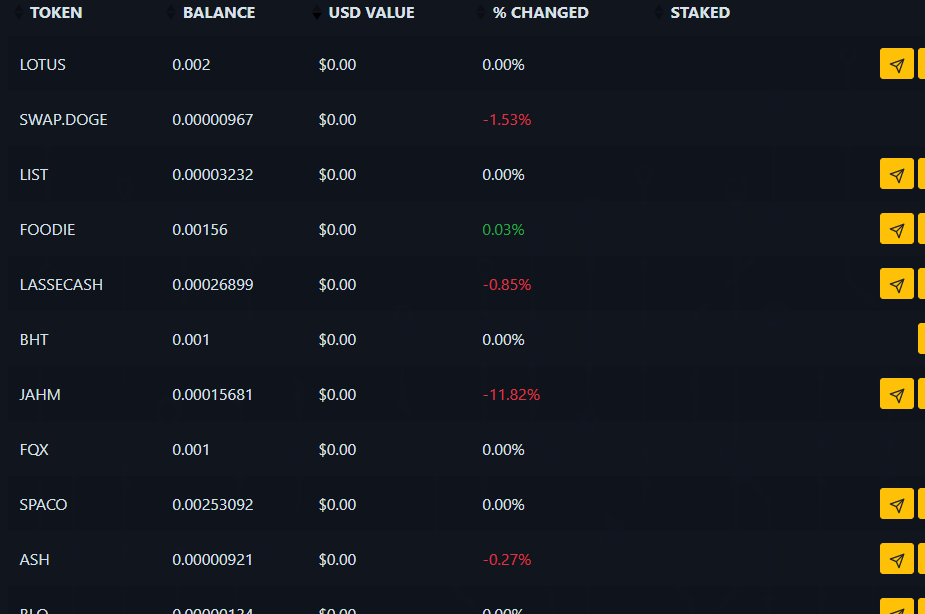 I don't know about you, but I'd rather have things I don't focus on set on zero, instead of a bit here and a bit there. But many of them are or were dropped daily by income / dividend projects, and even if one takes the time to sell the small balance assets (which isn't really worth it considering the time spent to do it), they'll promptly show up the next day.

There is a feature on the Binance website that I really like, to get rid the small amounts you have in your wallet, by converting them to BNB.

On Binance, by clicking that option you go to a separate window where you can check the small balances you want to convert to BNB (and uncheck those you want to keep).

It works only once per 24 hours, to avoid abuse, I presume.

Something like this could be built for @LeoFinance (LEO), @TribalDex (BEE), @CTPTalk (CTP), and so on.

Even general interfaces like PeakD can implement such a feature and for example sell to SWAP.HIVE since it doesn't have a token of its own.

In case of converting to a front-end token, the process has two steps:

Selling will be done at market price, if there is any. While this can be perceived as a selling pressure on less popular tokens, we must keep in mind we are talking about small values AND that adds to the liquidity of the token.

Buying will also be done at market price. While this will not produce a significant buying pressure for top tribes, if there are enough people using this feature daily on a front-end, there can be quite a few small BUY orders.

So, in my opinion, these would be the main benefits:

What do you think, is this worth implementing it? For Binance it's obviously easier since they operate a centralized database, they don't have to broadcast operations over a side-chain.

There is a feature on the Binance website that I really like, to get rid the small amounts you have in your wallet, by converting them to BNB.

I'm sure soon we will have this feature available with Hive-Engine!

It's actually took long time even for Binance to introduce this feature.

Hopefully, it would be useful.

The only issue I see is there is a different way to handle this matter on Hive-Engine and on Binance, which is fully centralized and can do this much easier.

That would be nice. If Binance can do it, why not us?

Because probably Binance doesn't broadcast any transaction to do that, not even on their BEP2 chain. While all transactions we do on Hive-Engine are individually allowed/disallowed by the account owner via Hive Keychain.

Even if something like this is built on Hive-Engine, without an API built in specifically for that at the Hive-Engine level, there would be many sequential steps (directly proportional with the number of account balances you have to convert), and each time the permission from the user to execute the operation is required.

P.S.: If someone rented out multiple Splinterlands cards at the same time a while ago via PeakMonsters, one should know how this process was: you got a Hive Keychain confirmation page for each card you rented out, even if multiple were selected.

It would be the same for each small balance conversion.

Still much better than selling them one by one manually, but not as smooth as on Binance, where you click Convert and that's it.

But what do you prefer? Smooth but not your tokens? Or owning your tokens and confirming every transaction?