felander in LeoFinance • 7 months ago

After close review of recent Tweets from the @realDonaldTrump account and the context around them — specifically how they are being received and interpreted on and off Twitter — we have permanently suspended the account due to the risk of further incitement of violence. read more 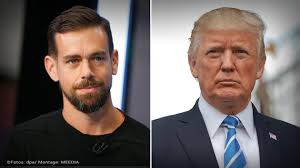 We believe the risks of allowing the President to continue to use our service during this period are simply too great. Therefore, we are extending the block we have placed on his Facebook and Instagram accounts indefinitely and for at least the next two weeks until the peaceful transition of power is complete. read more The opinion a company or a person has of one public person should not matter if you are reporting on him.

It is not up to a social media company to decide this matter.

So, mr. Trump, I might not be your biggest fan but I would not ban you from saying what you have to say to anyone that is willing to listen.

Just remember. Anything posted here cannot be deleted and will be there forever...

@felander, At the end of the day Life is Slave of Political System, it's a bitter truth. Stay blessed.

He would love playing dCity :)

yea, but he would need a Trump Tower card
maybe in the 3rd gen

@gerber could make one as a gag

Censorship. Not acceptable...Still, people embrace Facebook, Twitter and Instagram rather than silencing them and removing their power by not using them, or other centralised social medias.

Because its free and you dont have to understand crypto, you post you get and everyone is on there i still use Instagram like most people, crypto social based apps are still young and not where i find a public for my photography on instagram i do, thats one argument and there are many more.

you are right but I would say that most people have no clue that something like hive exists. Maybe in a few years.

I used to be on Facebook though rarely posted anything. I used it to keep up with things tat interested me but as they started to inundate my feed with what they thought I wanted to see I lost interest...The idiotic things people were posting didn't help too much either. I know people who love it and will stick up for it and Instagram etc. That's their prerogatives of course, but for me...I'm not interested. Hopefully hive gets some more traction.

Do downvotes still censor a post in the way that the nsfw-tag does?

nothing censors a post fully, it just makes it less visible but the data is visible on chain if you want to look

I know but it used to activate a hide-function where you would have to confirm you wanna see the post. That and denying payouts is soft censorship, even though its much better than having your account banned.

Unfortunately for him, @realdonaldtrump, @donaldtrup, and @donaldjtrump were all taken in 2016.

Well, if he did come here, he’d likely crush the network, as he did with Parler. Would be great advertising for us though. 😎

are they being used? maybe someone is sitting on the account and will sell it :-)

But he will crash the chain for sure

He's unhinged but he's welcome to come on here and help me retire even earlier!

now that is the spirit... we all like that early retirement

Would be interesting to have him on Hive, also if he powers up.

He has 88M followers.
It would fry our nodes and crush the chain.

If 88M buy into Hive, I think some witnesses would upgrade the nodes. :)

But this is true, the chain would not be able to hold such traffic.

Wait, Mr. 88 had 88 million followers? For real? I cannot double check that since his account is suspended and doesn't show anything anymore. But a quick search shows plenty of news outlets using this number now. 88 is also his name in English ordinal gematria (A=1, B=2, Z=26) and he has been playing with that a lot in the past.

yep, but here we could actually see if he was a billionaire :-)

If I would be a billionaire I would probably buy little Hive, not much to prove something. :)

That’s a real problem for him.... he loves to write crap and then delete it! Hive wouldn’t work well for the blitherings of Donald Trump!