felander in LeoFinance • 7 months ago (edited)

This surprised me as I know him mostly from Decentraland (hence the DCL) and the Ethereum community.

This is great news for the Hive and Splinterlands community.

3.18 k Followers on Youtube which is not massive but he is very niche, just like the NFT space
https://www.youtube.com/channel/UCn_tz_81xsEIPjIXVzKahgQ
10.7 k followers on Twitter which is a lot better and growing.
https://twitter.com/DCLBlogger 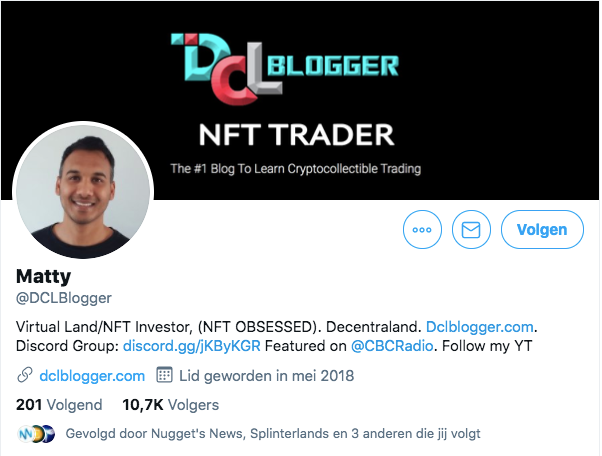 The main thing here is that he has a monthly NFT show on Nuggets News with Alex Saunders which now has over 100k subs on youtube.
https://www.youtube.com/c/NuggetsNews/videos

The reason I am excited about this is due to the fact that during the video (which was a bit chaotic) you could see them becoming fans or at least believers.

They usually do interviews/reviews on ETH based games and have mostly come away disappointed about the gameplay that is possible on the ETH chain right now. The initial launch and the financial aspect of most of the ETH based games are cool but the fees make it hard to run a game efficiently. Eth2 might change all that but that still remains to be seen.

They are very knowledgable about how the ETH games work but like most ETH fans seemed to just discard most other things as non-relevant.

They did some research and you could tell they were impressed a bit but still did not see half of what this game does. When @aggroed came on he just blew them away with all the features and possibilities that HIVE offers and that Splinterlands users just take for granted.

The questions were on point and in-depth but the answers were always more then they expected and you could see them becoming more and more intrigued by the minute.

So if they do start playing and experimenting a bit I would say that this is going to be at least mentioned on the Nugget podcast and put the game in front of a massive 100000 people audience.

The biggest thing for me though is opening their eyes to the possibilities that other blockchains have to offer and the quality that Splinterlands brings to both players and investors.

Nice. The more the better! Bring them in for Splinterlands and hook them on Hive.

that was my thinking as well.

One thing Splinterlands has been doing aggressively besides development his been marketing and using every tactic to get in front of peoples eyes, just look at the partnership with Brave browser who has access to over 2 million daily active users, over 10 blockchain integrations where several foreign based tokens can be used to participate in the in game markets, then look at making the Splinterlands app available on google play which has millions of users around the world, it is wild!!!!

Hive needs to take a cue. Only that there's no central authority controlling things

There's an absolutely priceless moment around 46 minutes in where they just go silent when aggy tells them about the 50K transactions a day for free bit.

yea, it just blew them away