edicted in LeoFinance • 8 days ago (edited) 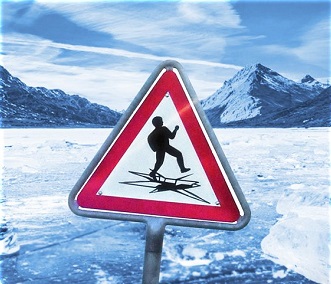 So here we are again retesting support at $30k.

How strong is $30k support? I don't know. Nobody knows for sure. Testing support is like walking out onto the ice and hoping you don't fall in. Is that a fishing rod I see?

I have a few reasons to believe that the ice is pretty thick, but the more we test it, the thinner it gets (usually). Once support is thin enough it will shatter and we'd likely crash down to the real support near $20k over the coming months.

It all depends on if we are still in a mega-bubble cycle or not, which I believe we are. We simply had a pre-run before the real run. If this was any other year but a mega-bubble year (every 4 years) I'd say that we were guaranteed to return to the doubling curve soon. The chance of getting back to back runs in a non mega-bubble year is basically zero. We usually require a long cooldown period before things can start to move up again. History shows we would normally get a nice bull run every 18 months. But there are a lot of good signs out there. Multiple countries talking about embracing Bitcoin and turning it into a full fledged legal currency (and in turn: a foreign currency elsewhere). Outflows away from exchanges are at record highs. The longs are starting to reforge their positions. All we need is a nice short-squeeze from here.

Bitcoin dominance is also very low (40%) and many alts are outperforming the big dawg. 2021 is a great year for alts, and they are popping up like wildfire trying to scoop up that liquidity.

In fact, everything is looking pretty damn good except for the chart and the short-term price. If we're being honest with ourselves, perhaps we just need to zoom out and look and what actually just happened. 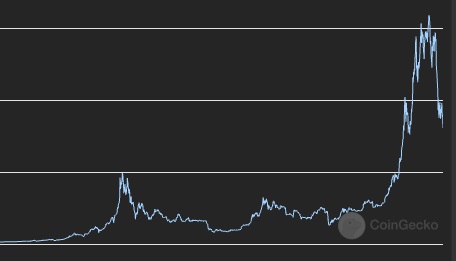 If this is a head-and-shoulders pattern, we are pretty much guaranteed to return to $20k this summer... which is fine. Once that happens I'll be quite comfortable going extremely long. That's right where the doubling curve is, after all.

The range of Bitcoin this summer could go anywhere from $20k to $100k (more likely $70k max). Crazy stuff. Not that it matters. My target has always been Q4. If Q2 needs to be a dud so we can get that mega-bubble at the end of the year, so be it... but I would be pretty surprised if that happened considering the action we've seen during 2013 and 2017. By all accounts 2021 should be even crazier considering everything that's going on in the world and with Bitcoin. In fact, it already has been. 6 straight months of upward action. That's nuts. That's already record breaking.

It's hard to imagine that this summer would be poor performing when it comes to the economy and the markets. By all accounts, stir-crazy citizens should be running around spending money like crazy after a year of lockdowns. That increases the velocity of money, and with all this bullish adoption surely a good chunk of that money should make its way to crypto. Obviously, the sharks are still buying in droves, as we can see when the price tanks but all the Bitcoin seems to be flowing to self-hosted wallets.

But, as we all know, the market does the opposite of what I say out of spite, so anything could happen. I was able to call this crash pretty easily. We sat for 3 days on a support line with garbage volume. It was almost guaranteed that we would crash again, so it's nice that I'm starting to learn a little bit better when to turn bearish.

For now volume is good now that the price is lower and the bulls are starting to wake up again to a newfound dip. Again, if volume gets slashed in half at this level and we haven't moved up, I'm worried that the ice will break and we'll see fresh local lows below this mythical support line.

Again, when it really comes down to it, if you could go back in time 9 months and tell yourself the price was $30k you'd be pretty happy about that. It's usually best to take a long term approach to these things. We can't see the forest from the trees.

I think with bitcoin dominance now under 40% there is a good chance it might further sink. When/If that happens it could get interesting as the whole crypto market might not be so much dependent on bitcoin anymore. The 4 year cycle could vanish so to speak. Instead, the market might normalize in the sense that cryptos could have their own cycles. On the other side, the stock market also has its bull and bear phases, so the macro phases of an entire market might always be there

If the four-year cycle vanishes, the crypto market will become very dangerous to invest in. Because the prices are normally based on absolutely nothing but speculation, the only way to make any money is to buy some shitcoin at a rock bottom price and hope shills are successful at getting dumb money to pump it.

If the four-year cycles disappears from BTC, there is no way of knowing whether it is cheap or not.

Well I think the 4 year cycle will continue for bitcoin. But other coins might decouple from that cycle. I don't know if it will become necessarily dangerous; perhaps people would finally just have to use their minds and think which cryptos actually have true potential. I would rather welcome that.

If we're being honest with ourselves, perhaps we just need to zoom out and look and what actually just happened.

Yeah we really need to count our blessings as the fundamentals are getting stronger - booming alts, widespread adoption, acceptance. What remains is a test of patience and our ability to play the long game if we truly believe we are on solid footing

Yeah, hopefully no one on Hive is panicking... and just slowly accumulating regardless of what the current price is doing. Definitely agree on the zooming out practice, and your posts really help with that. Just for clarification... your Q1 is Jan-Mar, Q2 is Apr-Jun, etc? My work puts Q1 as Jun-Aug so I'm just constantly checking myself.

Q1 is June?
Is that some south-hemisphere thing?
Is June winter? :D

Yeah, Australia's financial year is from July to June because we essentially take the entire month of January off as our summer holidays. June is winter so there's no better time than to warm yourself with financial year end spreadsheets.

That said... I work a lot with international companies who base their quarters off their biggest sales seasons... so sports apparel often start Q1 on the 1st of June which makes no sense to me at all.

Thin Ice, we all know when walking on thin ice spread out your foot prints.

I've got a nice basket of tokens right now, from stable to BTC to small projects like Hive. While I'm sad to see the market drop, I love my bags right now.

This market drop has been unique for me in that I still feel like I have a ton leftover.

I can now focus on what I have instead of what I don't.

When I first saw people talking about the 18k and 20k bottom numbers I was pretty dismayed. I have started to accept it more now and that is what I am planning on. Then when it happens I shouldn't be so shocked. I still think we are going to go up before the end of the year, but I think we will go down a bit more before then.

Considering how much we've lost, $30k might be a pretty stable base at this point.
The ice might be a foot thick... it might be a quarter of an inch. We don't know.

I do believe we're going back up, but not for another couple of weeks, is my opinion. And if we get rejected here, it's more likely that the support at 30K level will break. There's not much volume now to break the resistance from the previous support at 35K.

I'm not sure if I interpret this correct, so I would be more than happy if you could shine your light on this.

That's a good sign. I'm actually waiting for the dip down to. $20k so I can buy some( tho I don't have that enough cash to buy a bitcoin but a small fraction or maybe a half). I'm a newbie to crypto and thinking to invest in hive as well. I see a lot potential here. But I'm waiting if price falls by the end of Q3. I'm just hoping coz it's unpredictable.

I put on a btc future short last night as a small hedge just in case we crack 30K. I didn't do it up in the 50Ks like I wanted to, not messing them up again. Hopefully the hedge loses money.

I believe at every point, we have to be satisfied with the volatility of cryptocurrencies. A lot of things happening are predictable but unpredictable so those who watch the charts have to stay informed.

I only got in the crypto game recently so I'm trying to use this moment to DCA my way into a good position as I'm sure it will pay off in the future.

Have you changed your end-of-year prediction for BTC or is it still the same?

been the same for 3 years

Everything is interconnected for sure. Right now, for me, is a great time for tech and knowledge accumulation and to just cost average in and hope for the best. The only signals I've ever really felt were bullish ones from the beginning of this year til May, so I really need to hone in and start understanding what signals feel bearish. Thanks for this article.

I see it more like a wealth transfer, once again from the hands of the poor to the new crypto oligarchs...
By the way, do you leverage trade?

I haven't leveraged traded in a while.
I've only used MakerDAO to leverage trade (minting DAI and buying ETH).

If BTC breaks under $30k, it'll drop fast to $20-23k i think. This time 5-6 weeks back, the thought of talking about BTC going to $30k would have sounded silly but here we are. Been trading under the 200 week avg for maybe a week already which is bearish, not good.

honestly I hope it happens because I'm ready to go long

Wow this is good, I think this is not the period of sell but rather period to buy from the market and hold for long.

return to $20k this summer

So do you think it will make a move back up before running back to test 20k? I think its more likely to drop to 20k but I don't know if it will because so many people are eyeing that zone.

We're now having a retest of the resistance from the previous support level. There's not too much volume for what I can see. So I doubt BTC is going to break to the upside.