edicted in LeoFinance • 19 days ago

Looking at June 5th - June 10th we may be headed toward a currently unbreakable resistance line. There is so much more fear left in the market to be capitalized on. Even if we are rolling into a full summer bull run, there is enough fear at this line to crumple the price temporarily till we get back to resistance again.

All the sharks have to do is short the market there.

It seriously would be dumb for the market to not short at that point. They are controlling this through the extreme emotions of fear that rampaged through social media like Twitter and TikTok.

Did you think they wouldn't notice immediately how much power they have and keep testing the limits of that power? This is an unregulated playground. It is what it is. Can't throw the baby out with the bathwater. That's not how this works.

The two weeks measured above are from peak to trough. Not necessarily in terms of price, but in terms of fear and greed. On May 9th the cryptosphere was extremely greedy and confident. On May 17th, users were annoyed with a 30% retracement but fuck it they all bought the dip. Many "bought the dip" on leverage and became overextended.

The real fear didn't hit until the next day when the market took a full 50%+ retrace. The bull market was called off by many permabulls and calls for 4 more years of darkness got into everyone's head somehow. On May 22nd when we crashed to $31k after stabilizing at $37k, this was the peak stage of grief in the market (by a longshot). I saw this first hand on #CryptoTwitter. Oh the wallowing and suffering. Why me god why? I thought I was special!

In any case these things take time. Still expecting a big bounce over the next 2 weeks. The chance that we break that resistance line in the short-term is very unlikely imo. If we do summer is going to rampage for months. Might as well hedge either way. I'm not going to be in trouble if the market rampages up, that's for damn sure. 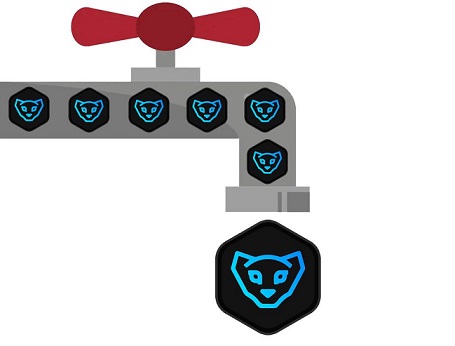 That's why CUB is awesome.

My best hedge out of any hedge is the BUSD/CUB LP pair. Bad boy still has a 260%+ APR and the LP pool auto dollar-costs-averages in and out of stable coin BUSD. This gives square-root volatility protection in both directions. Users in defi wrongfully call this kind of algorithmic dollar-cost-averaging: "Impermanent Loss". Such greed, much wow.

At 0.73% ROI a DAY... I realized quickly that even throwing $1000 into this pool generates $219 a month. Pretty crazy stuff. In any case, in two weeks I'll be thinking about allocating a bigger bag here to hedge against the potential downside. When the market crashes this is the best place to be without fear of missing out on the upside if it comes. Volatility is hedged in both directions in this farm. The yield is insane.

I thought about selling my liquid Hive into this pool but I still think Hive is gonna moon as well. We had rock-bottom support at the 35 cent level recently, and I think a spike will take us around x10 that. Plan on DCA selling Hive when we get to around $1.90 expecting up to $3.5. I don't have a timeline for these numbers: many random summers have been good to this network.

I started a powerdown to this affect. A very small one. 1000 Hive a week (13k total). Considering I have access to 214k Hive it's a very small amount relatively and I'll probably cancel it well before it actually completes.

This community has a history of going x10 many times during its short career. But it can never go higher than that in a short timespan. Always be ready for the x10 on Hive. They happen fast (3 days or less) and the community always complains about the lack of liquidity. That's why we need CPD loans so we can short the market... but whatever. Also need Hive/HBD to be an AMM yield farm. Need devs. So much work to do and no people to do it. There is a lot of hope in the market, and there is a lot of fear. This upcoming resistance line is the perfect opportunity to crush hope and short the market. They've already been blatantly manipulating it. I expect a continuation.

If Bitcoin happens to be $53k near June 10th I'm going to be forced the throw out some hedges. I'll be looking at CUB/BUSD to accomplish that. With yields that high it's too good. Then when I feel like the market has bottomed out again I can exit and actually have some BUSD to BTFD.

We'll come back to this later if I'm right and completely forget about it if I'm wrong. Cold Reading. Sorted.

It’s difficult to predict the market, so hedged bets are the way to go. I miss my carry trades so much.

Stick to 1:1 leveraging, learned that lesson from forex.

:D is not cool if you only have coins that can moon, makes it even more difficult to buy other coins :P

Your getting me really interested in the CUB/BUSD pool. Currently I am only in the BLEO/BNB pool and honestly I don't really have enough in Cub Finance to harvest everyday or two yet.

Plan on DCA selling Hive when we get to around $1.90 expecting up to $3.5. I don't have a timeline for these numbers

I give it two years tops, might be sooner. Let's just keep on stacking. How do i get started with CUB DEFI BTW, I'd do the research myself but too lazy. Care to share some useful links?

Absolutely amazing new future ahead of us and I can't wait to watch everything grow even more thank you very much for your post and we hope you have an amazing day.

Good call, I am in that farm, I think the stable coin protects my from impairment loss and against market crashes.

I started throwing some funds in that pool too. Looks promising

CUB/BUSD was the first pool I invested in when I got here. Now I'm regularly adding to it bit by bit. I might have to increase the amount of my regular 'bit' additions though after reading this,

Thanks for the insight.

I still don't understand how pools work. Regarding CUB Finanace I am studying platform. As for HIVE I have to say it bounced very well, Hive (HIVE) did + 39% in 7 days

I'd agree to the point that in short term a big upside move is highly unlikely. I'm in ALts too much as my first bull run and a small portfolio. I have my shares in cub as well so pretty good. Overall I'm looking over market to get stable for a while so we can gather energy for a big pump.