edicted in LeoFinance • 20 days ago (edited) 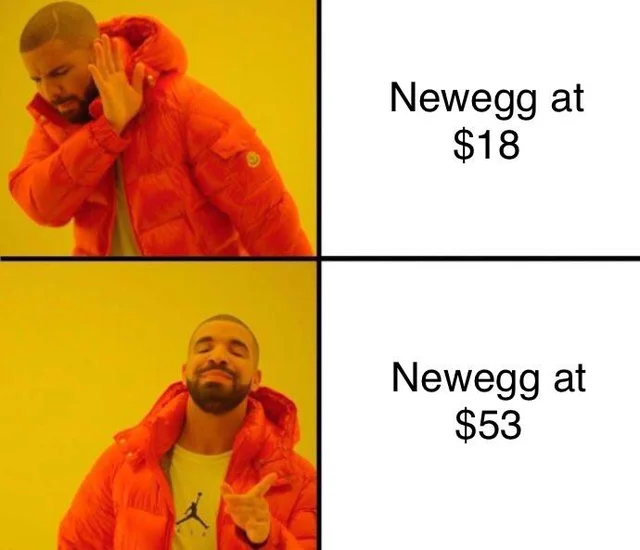 So my brother just made a bet on Newegg stock. They are a mass-supplier of computer parts online. I've used them to build every computer I've owned. In any case, he said he thought WallSteetBets was going to pump them...

In five days they've gone from $12 to $75... hm... my brother just tripled his money in one day. The stock market is making those crypto moves. Could it be too late to get in?

Course it could, but my brother monitors a bunch of financial news channels, and none of them are even talking about this... yet. Think about what happens when they finally capitulate and talk about it? Hm... yeah.

Newegg was the standard for anyone building a computer before Amazon started competing. It's a good pick for anyone looking to knock Amazon down a peg, which I assume there are many on WallSteetBets, who recently went dark on Reddit and turned it to private.

When are we going to give those guys encrypted chat and their own token, I wonder? Time will tell.

I would personally never invest in stocks, but if Newegg.com is the new memestock... that's the best one they've picked yet. It could just keep going up till the end of summer. Not not financial advice.

That's wild. I really like newegg as a business, bought my laptop off there last October and have been buying computer related products from there since 2005

And robinhood repeats itself again hahahaha

Dang, that is pretty impressive. I wouldn't have pegged Newegg to be a target. Especially since they are still relevant and not really floundering like Gamestop or some of the other ones were. Congrats to your brother!

I'm not interested in investing in stocks either but that kind of stuff is tempting, especially after what we saw with Gamestop

Lol I didn't expect NewEgg to jump so much but yea I saw it in the news and I was like, the largest part of the move is done. The risk versus reward doesn't match right now but its possible to wait for a retracement to looking for a bounce.