edicted in LeoFinance • 19 days ago This is definitely the weirdest chart I've ever seen... consolidating around a decline with very little volatility... A $30k support line that's seemingly unbreakable. Something is primed to happen very soon, which way it goes is anyone's guess. My guess is always up, so no surprises there. 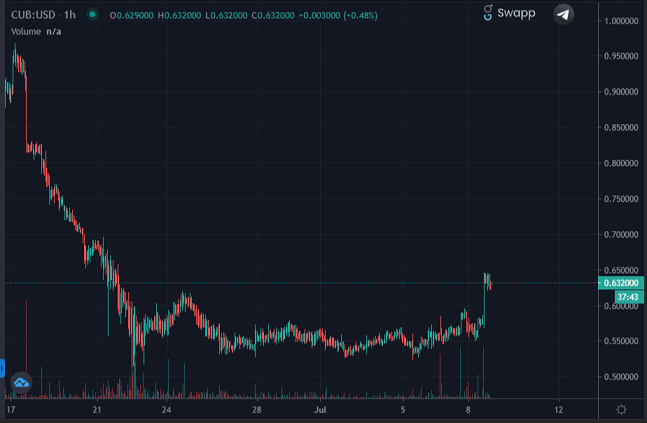 Cub seems to be springing to life.

We got a big update in the roadmap yesterday. There's much more to this launch than just adding 3 Kingdoms. In addition to these 3 Kingdoms being added, the 3 farms/dens that they replace will have their multipliers deprecated and the CUB Kingdom (Den) will have it's multiplier doubled.

This is a pretty big deal in terms of token price for CUB. I've talked about this in several musings. Modifying DEN yield gives an injection of liquidity to the CUB market and heavily incentivizes a higher token price.

This change in the Den yield structure could basically double the price of CUB in a very short time period, and because it's happening tomorrow there is really no time to "buy the rumor". It's happening right now. There's no time to inflate the market before it's employed tomorrow.

Essentially this change transfers a big drain on the network and allocates it to the diehard moonbag hodlers. Couldn't come a moment too soon. I think it's pretty obvious that CUB whales are going to hold down this level and perhaps even push the price higher as this new floor is implemented.

If you're in the den, your long on CUB. This is because the CUB den has a very low yield. And due to this lower yield the only way to make money in the DEN is for the price to go up. If the DEN had a higher yield than LPs, the price would likely automatically spike pretty hard, but this spike could potentially lower the liquidity in the LPs due to cannibalization (users exiting the LP and shoving all liquidity into the den kingdom.

It should be interesting to see what happens with the price due to this doubling, but we may discover that doubling it wasn't far enough. At the end of the day doesn't it make sense to reward the more diehard members of the community? We'll just have to see what kind of effect it has when it comes into play. I'm personally guessing x2 den yield will x2 the floor price back up to around $1 resistance, at least in the short term.

It should be noted that if we get this kind of snowball effect, the price of CUB will rise, and yields on all the remaining farms will skyrocket. Such an increase in yield could even push the price of LEO up if the bLEO/BNB pool starts paying out x2 or more what it is now already. CUB/BNB has already increased from like 170% APR to near 200%, making it higher yield than CUB/BUSD. Whales are making big moves.

There are a lot of developments with CUB happening over the next week. It's nice to see that the pace of development here is still racing at lightning speeds. Soon CUB will break away from the competition and show that we are actually trying to build something here rather than pump/dump a token. Leo community stronk.

Yield farms can control inflation with much more finesse than other kinds of crypto. We can basically modify the numbers on the fly as we choose. This is the Wild West and no one really knows what they are doing yet. This upcoming modification should be a huge boon to the price even with zero extra inflows from outside the network. Give it time.

I thought that dens don't make sense anymore now that there are kingdoms which autocompile?

When I say den I really mean Cub Kingdom.
Den is a bit outdated now.

I have been going HARD into CUB in the last few weeks. I saw this coming a mile away (I am amazed more people didn't). I am very excited to see what the week brings in terms of CUB price.

I read this and drop 50 buck more into Cub as fast as I could! :D

Do you know which farms or dens will be replaced and put into kingdoms?

basically all of them except the main three.

and if we could get another platform to list the main ones we'd move those as well.

Fantastic write up concerning CUB.
Thanks for sharing

I've been buying at staking, definitely on the move now and again I never have enough! Lol

Could you just tell me what I need to c change? 😃

Specifically I have Cub in the Kingdom and Cub-BNB in a Farm... what should I do?

sounds like youre in the right place.
im just going to stop selling farm for a while