edicted in LeoFinance • 15 days ago 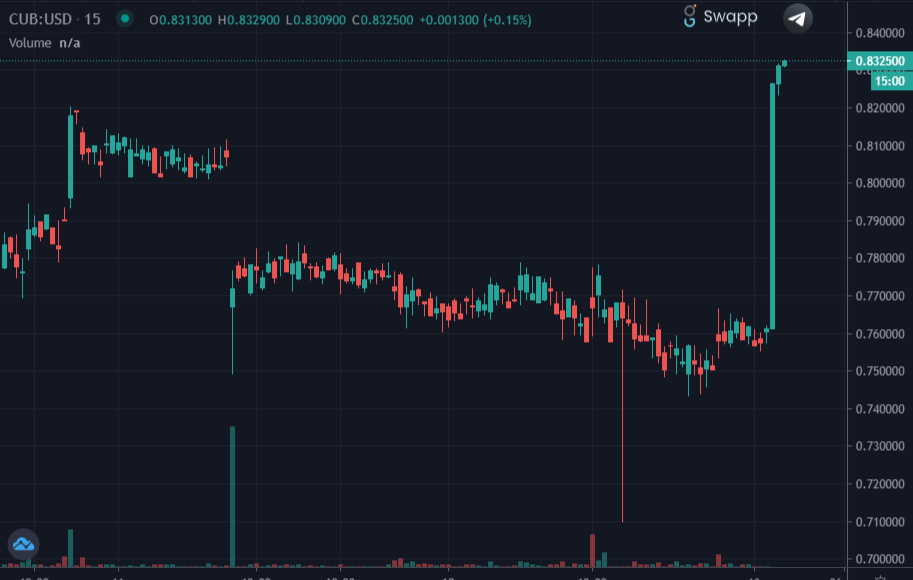 Lots of speculation going on with the CUB market right now based on events that have yet to roll out. Soon™, The APR of the den will be multiplied x2 from x15 to x30. What does this mean for the market?

Exponential math is crazy at these levels.

First of all, many will look to APY.

So how much does the APY shift when the APR goes x2?
You might be surprised.

Obviously 131% vs 52% is a pretty damn big difference, and we can expect that some percentage of the network will compete to earn a piece of that new, much higher, share.

The problem is that many users on the network are already speculating to this affect, pushing the price up 50%+ before the event has even triggered. If too many whales over-speculated the event in advance that would turn it into a sell-the-news-scenario. It's hard to say if the speculation matches the fundamental increase in yield.

I think the math of it can push the token price even higher as soon as yield doubles. There's bound to be users out there that trade based on yield doubling and APY going x2.5 to 131%. After all, if users hopped in at 52%, wouldn't a lot more obviously want to join at 131%? These things can snowball out of control if the sequence of events ends up being lucky.

The main thing to consider here is the change in APY from 52% to 131%. As more users compete to enter the new-yield pool (say pushing 131% APY down to 100%) the price of CUB is sure to skyrocket even more because all that liquidity comes directly from the LPs.

Counterbalance this with the speculation that's already been done, and there should be some resistance as these two forces collide. Will this geyser shoot up to the moon or will it get smothered by the speculators? Personally I know LEO to be a pretty diehard holder community so I'm thinking we got what it takes to make moves.

I'm not making many bets during all this madness, but I am saving my farm up in the Cub Kingdom like so many others. No more compound farming for me until the dust settles.

I believe books will be written about how to manipulate these yields in order to stabilize the economy in various ways. It's crazy that we have front row seats to this new tech and all that it can do. What will these rockets do next?

Yeah saw that move, all my hive has sold, (bummer ) looks like I will have to wait for the price to drop so I can buy it all back.

The yields are good, but there is more if you are currently wrapped with a stable coin in the farms the payouts are amazing there as well.

It's easy to move the daily harvests over and put them in the cub kingdom, hoping to see the price continue to rise.

I've had a hard time moving out of the Farms, not only because of the yeild, but because it allows me to hold the wrapped cub and if I move directly into the others, I am going to have to sell a lot of cub

Wait are you telling me I should have kept some CUB in the old den? Now you tell me.

nah the old den and the kingdom are the same thing, but the kingdom auto-compounds the rewards for you. might as well just stick to the cub kingdom So how do you think things will play out? I have been using my FARM earnings to put into the DEN to compound and I haven't really bothered putting my earnings into compounding my LP (don't think I earn enough each month to make it worthwhile yet).

I have been thinking I need to start holding some of my CUB liquid in case the price goes up or if I end up needing it for the MATIC side of things when that is available. Until now I have just been pushing everything in to the Kingdom.

CUB in the kingdom becomes liquid after unlocking it.
There's no timelock so I would say everything on CUB is liquid.

We are in good water going forward.
While other tokens are petrified
we are sort of thriving from within.
Good place to be.

The fear-based market is strong.

I think both market exist
with a reason to think and pick
a spot.
It is scary sometimes when
your feet are not planted where it should be.

Interesting times for cub and hive. Glad to hold both. What must have caused the pump? It's all good as long as it stays that way

Having Khal in the driver seat I believe that CUB will have a great destiny! And us, as early adopters, can strike it big if we stay the course...

I'm glad I got some more right before the pump

Good day to hold both tokens :)

Fantastic upward movement of price. This is one of the best time to sell but i feel it can still go up better than this.

Thanks for the update

Yes, sell sell, please. I want to get more CUB for cheap.

CUB is on the verge of an explosion. It's going to be beautiful. There will be a spike once polygon branch launches and BNB payments. Maybe a market correction but it will be hard to get CUB under a $1 soon.

Nice deduction. Cubdefi is here to stay and it will shock the world. And every one will be glad they took the opportunity when they did