edicted in LeoFinance • 12 days ago (edited)

After a painstaking delay, yield on the Cub Kingdom has doubled, and all of the outdated ancillary farms have been laid to rest.

One of the big whales speculating on these events has already sold the news, resulting in an immediate 12% crash in price. This liquidity was moved back the LPs where they came from originally. "Whoever" it was made a pretty penny... I'm guessing like $20,000 over the course of a couple days.

However, the show's not over.

Soon™, the fees charged to other kingdoms will be allocated to the CUB Kingdom in two different ways. 3% added to the yield, and another 7% that just buys and burns the token. Anything that incentivizes being in the Cub Kingdom is going to boost up the price something fierce... speaking of which... ... the upcoming CUB IDO feature which will likely burn $1m+ worth of CUB off the bat - details later this week).

What does IDO stand for?

Whatever it is... if it actually burns over $1M CUB right off the bat that is going to be quite a sight to behold. I'm still afraid to sell my farmed rewards even though I should be playing it safe and hedging my positions. Hell, that's no fun. Gamble gamble!

There's a lot to unpack with CUB and a lot more information to be released soon™. You can be sure I'll cover it in real time. Goddess Moon is not disappointing, we have another 8 days until the full moon, which has been marking support points pretty well over the last several months. It looks like a retest of $30k is firmly on the table, which is fine because the alt market has been doing so well Bitcoin dominance has plenty of buffer left to support that critical juncture. Not so great for the alts though.

Looking at the market at large, Bitcoin still shows extreme weakness. Many are still quite worried that we will break below $30k in the very near future (days/weeks). I'm not worried about that scenario at all, but September is looking brutal as always.

One reason for the market weakness is due to Bitcoin's artificially decreased hash rate. Hash rate and price are intrinsically linked, and because China banned mining so hard Bitcoin miners have never been happier. Why? Because BTC difficulty has decreased a record amount (and might decrease again), meaning that all the miners still left mining are just getting free Bitcoin.

On chain metrics are extremely bullish and all these miners and other whales are accumulating. Corporate sharks, regulators, and other powerhouses are still trying to breed fear and crash the price. It also doesn't help that things like unemployment and rent forgiveness will end soon™. The entire economy may experience severe lockup across the board over the next year or two. If so, it won't be pretty.

The main thing to look at is the scary teal resistance line that currently towers over the local low price of Bitcoin. Once again, in September no less, this line will be near the $30k mark. If we don't definitively break that resistance and test it as support within the next two months, I'd say we are due for a crash down to the doubling curve.

So the lowest Bitcoin can crash to is around $22k in September, but a lot of analysts are looking to the slightly higher support line at $24k, which is also relevant, as we consolidated there for a while on the way up to $40k in January.

However, after just now going back and looking at the price action from that time period myself, I see that only the top of this range was $24k. The bottom... is once again $22k. $22k is clearly the ultimate floor for Bitcoin should shit really hit the fan in September, which is why I'll be DCA selling a tiny bit no matter what in late August. I remind everyone that September has NEVER been a bullish month for Bitcoin in any kind of significant way. 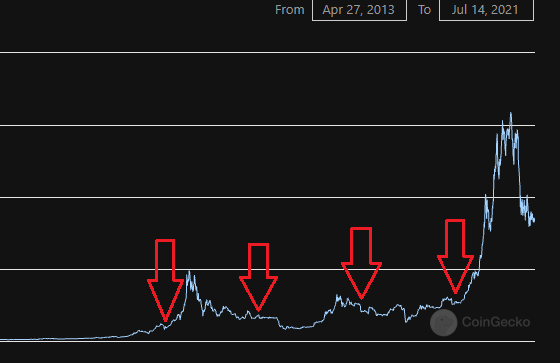 It doesn't really matter if August is a good month or if we simply trade flat. September as never been a bullish time for the market, and I have no reason to assume this time around will be any different. It is, however, always a great month to buy, so that's what I'll be doing. Wish me luck!

For the most part these days I like to speculate on gambling more than I actual like to gamble. The CUB ecosystem allows me to make extremely measured & safe bets, especially with access to the CUB/BUSD pool that has extremely low volatility and high yield.

To give a recent concrete example on that front, take the CUB crash from $3 to 50 cents (x6 loss). During this time BTC crashed from $60k to $30k. However, even though the price of CUB crashed 83% and BTC only crashed 50%, the CUB/BUSD pool was still the place to be, as the yield in combination with the stable coin paring mitigated almost all of the losses. That's quite a powerful utility if you ask me.

How does this work? Well for starters the stable coin pairing offers square root volatility protection. This reduces the x6 (83%) loss to an x2.45 loss (59%). Then, when we take into account that this pool was paying out like 17% ROI a month we see that much of those losses were completely mitigated, especially if the user in question had been compounding those rewards the entire time back into safe pool. For example, compounding that 17% yield for 3 months is a 67% gain, meaning you actually made money after the brutal crash that pretty much wiped everyone else out. Powerful stuff.

Now that CUB is following in LEOs footsteps and pumping out development at a blinding speed, it's hard to even pay attention to the market at large. CUB is making big moves, and BSC is largely unaware about what's going on here. It's going to be very interesting to see how this progresses, especially after tapping into the Polygon market. CUB and the entire LEO ecosystem are becoming a liquidity trap that will almost certainly benefit Hive in the long term. I'm stacking them all.

Polygon coming soon! That should be promoted heavily! Huge opp there since Ethereum is the primary DeFi platform and Binance has been getting slapped as of late

I want CUB to turn into such a great platform that anyone in crypto feels safe to transfer their currencies from one blockchain to another by using LEO bridge on several blockchains. ETH,BSC,Poly v2, KSC ... does not matter. Everyone will be sure that CUB Finance will be one of the provide services anywhere.

I'm super into CUB because of the engagement aspects of LEO. How do you attract investors? Educate and engage with them. All this yield stuff would have been wicked hard to figure out, but the community behind it engages within its ecosystem in a thoughtful manner.

There are downsides to that model, sure, more adoption, wider community, more...internal dissonance/grifting within it possibly. But in the early stages, the community seems more tightly focused on the finer points/aspects of the tech behind CUB and decentralized finance.

And Pokémon does, indeed, rule.

CUB and the entire LEO ecosystem are becoming a liquidity trap that will almost certainly benefit Hive in the long term.

In the crypto space, a 10x move is almost trivial. Hive’s distribution means that a 10x from here would generate massive wealth for a lot of people. And that would in turn generate FOMO. Imagine how much hype and hopium would be swirling around in that environment.

Any idea by when the BNBs are paid out as rewards of the Kingdoms? Monthly?

We are waiting on a lot of info so I'm just giving it a week.

CUb Defi certainly feels like it should have a lot of potential upside just because it seems like there's a constant and persistent stream of of announcements followed by actually delivering the goods. One of the things that has always made me a bit nervous about Defi is the way these gigs seem to launch with a lot of fanfare, the resident token skyrockets... and then all you hear is crickets chirping after that.

I'm sure hoping to see continued price action as well as more investors. It has been such a nice haven during the recent market drops.

Definitely the most exciting thigs are coming along. I have a small portion in CUB as well and some indirect things like @cublife and @lbi-tokens that has invested in CUB. So overall I'm happy with my position. Now Just trying to grab Some HBD's for compounding in Savings....

Interesting seeing all that's going on Cub. Great to have grabbed a few Cub (and still doing so). The unrelenting cub team really inspiring lot of believe into this project.

Great one seeing the increased Apr. With polygon set to be integrated and the IDO, I also believe will be seeing great prices. By the way, great analysis.

Do you think the price of CUB will drop back down after the IDO? I know its bullish for CUB and it will burn a lot of CUB but I don't know what will happen afterwards.

If people over-speculate it will crash.
Hard to guess how much these things are worth.
Guess we'll just have to play it by ear.

A lot of predictions I've come across are pretty resilient on btc maintaining that 30k resistance. No matter where the price goes though, I'll just keep stacking the alts I can too

fine analysis on CUB since there market is bearish now it is advisable to buy more right now since August shows that the price might go higher.

and as for this "Bitcoin's artificially decreased hash rate" this has been a major challenge for all bitcoin holder especially those that bought it when the price is high. everyone is skeptical about buying or selling due to the fact that no one knows what might happen next to bitcoin

Thanks for upvoting my writing! It means a lot.

Btw, your Red Mage icon has such style! I've always loved that one.
But maybe the Black Mage has just a touch more mystery. ;)

Ah yeah you know I saw your name and I was like "damn, been a while".
I burn a lot of my upvotes on LEO content.

I definitely played a black mage in one of those FF MMOs back in the day.
Played a warlock in wow; switched to mage.
Mage/Wizard is definitely my class.

It was great to see this after constant loss of APR. !PIZZA

@edicted! I sent you a slice of $PIZZA on behalf of @vimukthi.