Archon Tribe on the Launching Pad - Low Supply, Community Led - Here's everything we know so far!

ecoinstats in LeoFinance • 11 months ago

Archon is a new tribe on HIVE, born out of UpFundMe. While UpFundMe continues on its original platform, ARCHON has taken all the lessons learned from the previous generation of tribes and implemented them into the design of a new tribe.

And, breaking news, Archon has now loaded enough BEE for Nitrous and SCOT fees! As soon as the set-up is complete, this tribe will be ready to roll. Let's take a look at all the details we know so far.

First, we must talk about the math. The low supply numbers, and low inflation numbers, plus the plans to use ARCHON in its own version of the already existing @ufmlotto show us that this is a tribe that has spent a lot of time thinking about the numbers. Here are the initial stats as reported:

At the end of the first year, there should be about 270k Archon in existance, minus what has been burned. And the plans are to burn a lot of it:

As we reported, the ARCHON airdrop for UFM holders has completed. There is one airdrop left, ARCHONM miner tokens to UFMM miner token holders. This is reported to take place on tribe launch:

The ARCHONM miner token is another very unique and interesting aspect of this tribe. It is reported that these 1000 tokens will be entrusted with a large part of the governance of the tribe, though any concrete plans would naturally roll out later. In that vein, the community member who writes the best announcement post will become a miner in the community, as reported in the first image of the post.

Here are the initial numbers reported: 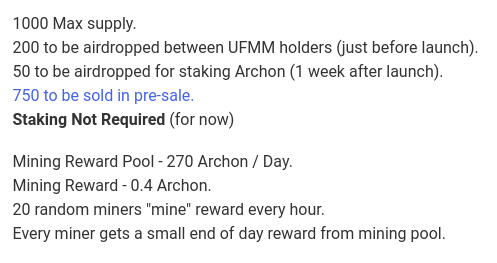 The combination of lottery mining and fixed mining systems was elaborated on in a further announcement post Archon Mining = Hybrid Mining: We can confirm that the ARCHONM miner tokens are currently paying both ARCHON and HIVE, as detailed by the @archon-mining account. Behind the scenes we have been working with @archon-mining on a roadmap to turn the automated mining reports into a hybrid curation report.

We are very satisfied with the set up of this tribe. Originally one of the things we loved about UpFundMe so much is that it is a 'General Posting Tribe'. Our synergy Fund took this to claim that 'everyone is funding something', and used our stake in UFM to reward 'project builders' and developers and interesting and thoughtful bloggers on the platform.

What will ARCHON tribe's focus be?

While the official tags to be used by the tribe haven't been announced, already discussions have begun within the currently small community about what tags and types of content we would want to support. With that said, tribe founder @taskmanager has confirmed that the general purpose vibe should continue.

Our synergy Fund, as a current miner, supports a general purpose tribe, because we recognize that everyone's contribution is unique (and Everyone is Funding something). We also hope to make a home for 'OPEN' content, including open source software and hardware, open science, open ecology and open government (transparency in governance) initiatives, and potentially more 'open' movements as they come about.

For those interested, ARCHONM is still available for sale, plus the two upcoming airdrops.

The Synergy Fund will be participating in this tribe, and already holds staked ARCHON from the UFM airdrop. We have picked up a few miners as well, and will do our best to contribute to and guide this promising project and community into synergistic relationships with people, projects and platforms.

As usual, we must state that none of this is advice, it is all just history with our own interpretations sprinkled in. Any decision you make should be first accompanied with your own investigation, ie 'Homework'.

Was thinking of doing a write up but after reading this nothing left to say. You killed it well done and excited for the launch

Excellent! You have explained it so well! ❤️

Got me to buy in, even if it is only 1 for now. Looking at the last report looks like I might need 7 to get any hive, but life will go on, I just don't have that much Hive.

Very excited about the future of ARCHON!

They sound like a great addition to the Hive-Engine ecosystem 💪🏽

All sounds great, thanks for your hard work! Looking forward for even more good stuff!

Great write up, and a wonderful group of people! Always thinking of tomorrow...

@ecoinstats how can I buy ARCHON?