People are exchanging their dollars for DOG MONEY

I saw this excellent video by Remy Munasifi, and I couldn't help watch it a few times, and it got me to realize that there are a few very valid observations going on here, besides the great humor value. Take a watch of the full video if you like, before we use it to break down the state of the world.

The video starts off with a reasonable premise; high inflation and low interest rates are causing savers lots of grief, being reported on a newscast.

Coming Up
Bad news for savers as even those with high interest savings accounts are seeing their money disappear thanks to inflation. 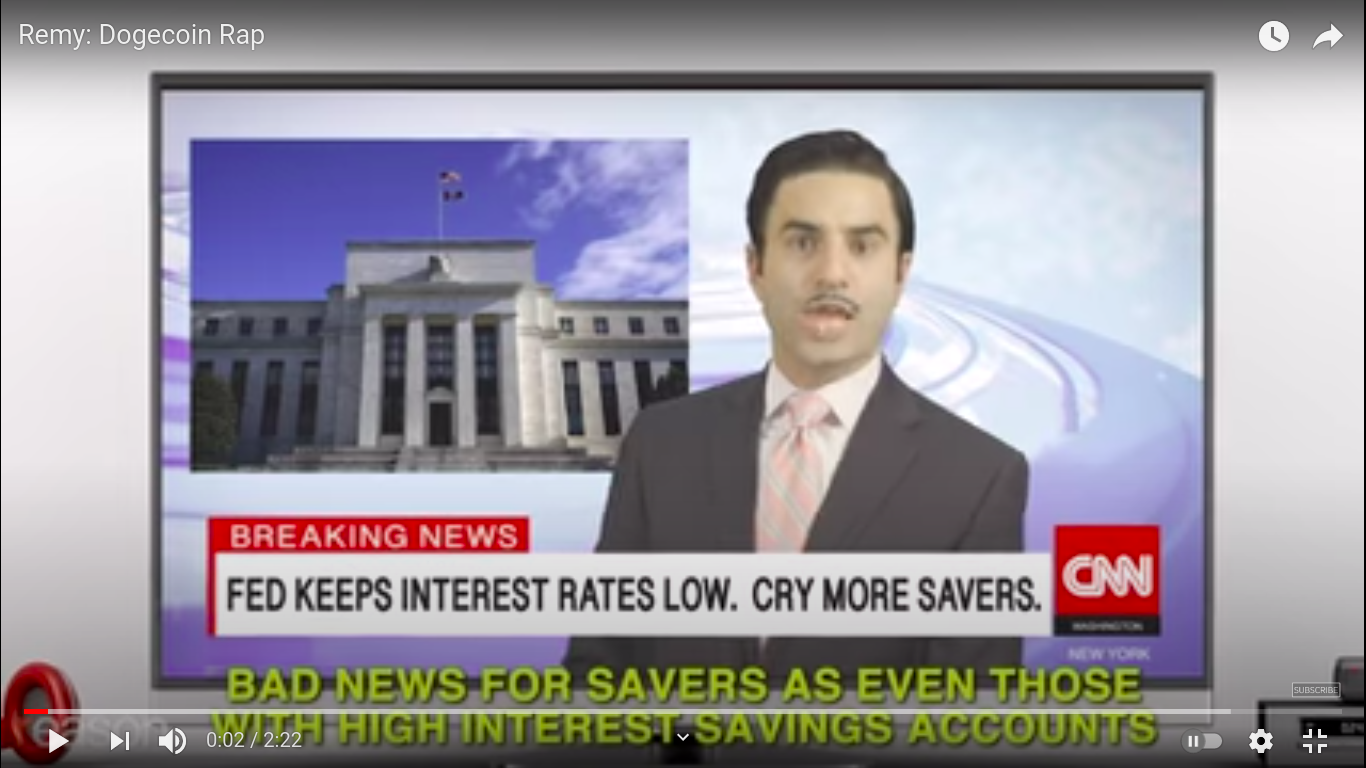 But of course since its the news, they want to scare you a bit more first:

But first
We'll detail every possible thing you could die from 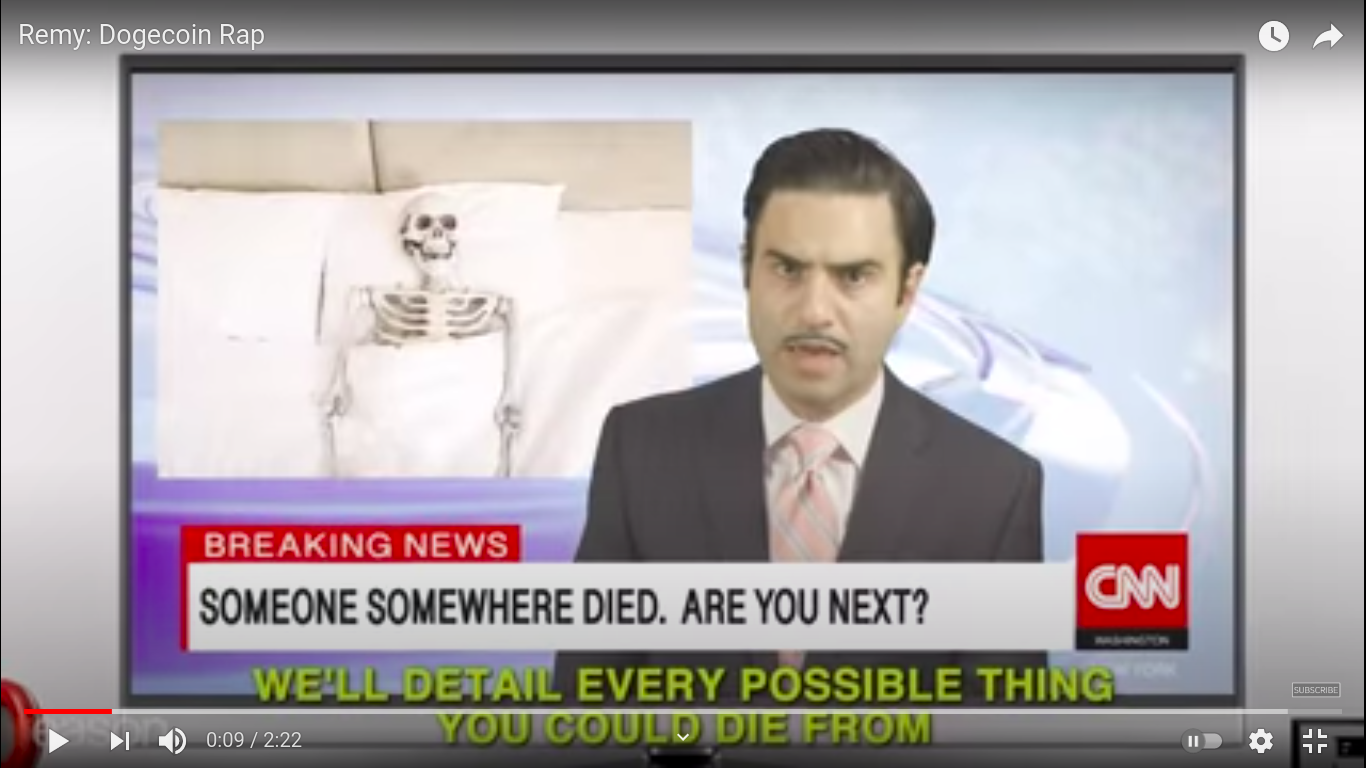 Regular news watcher has a worried look on his face. He was doing everything right - he is a 'saver' after all! First we break down some of his characteristics:

Look at the pride on his face! Even though he has been victimized by federal policy, tricked into holding the 'dollar bag', saving in a currency destined for hyperinflation, he can't help but feel pride for his conservative financial management. It reminds me somehow of the recent suicide by contrarian value investor Charles de Vaulx, who was surely proud of his discipline before things became clear that the Fed doesn't want markets to 'work'. 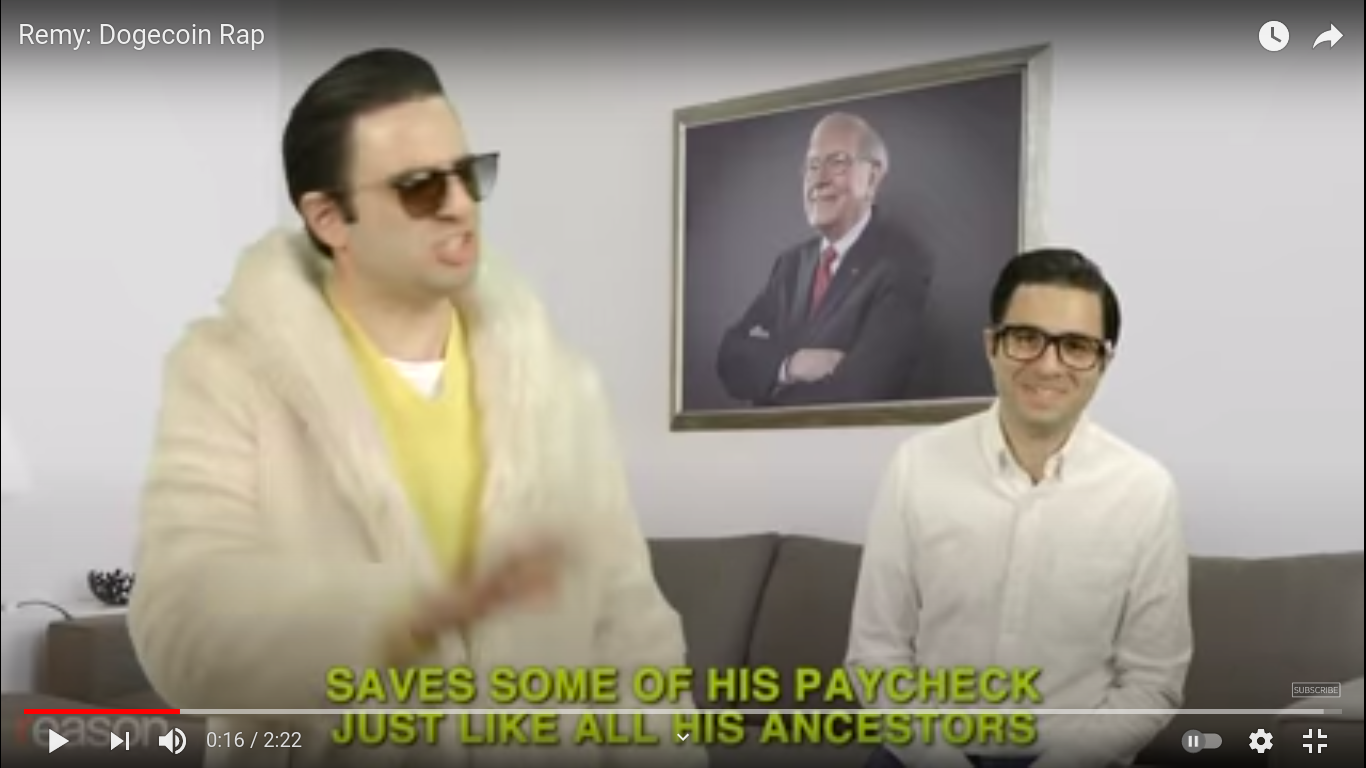 Him looking for high yields?
That's never the case
He's seeking 6% returns
'Slow and steady wins the race'
But when he checks his accounts just to see what their fielding
Its like driving in Maryland
Ain't nobody yielding 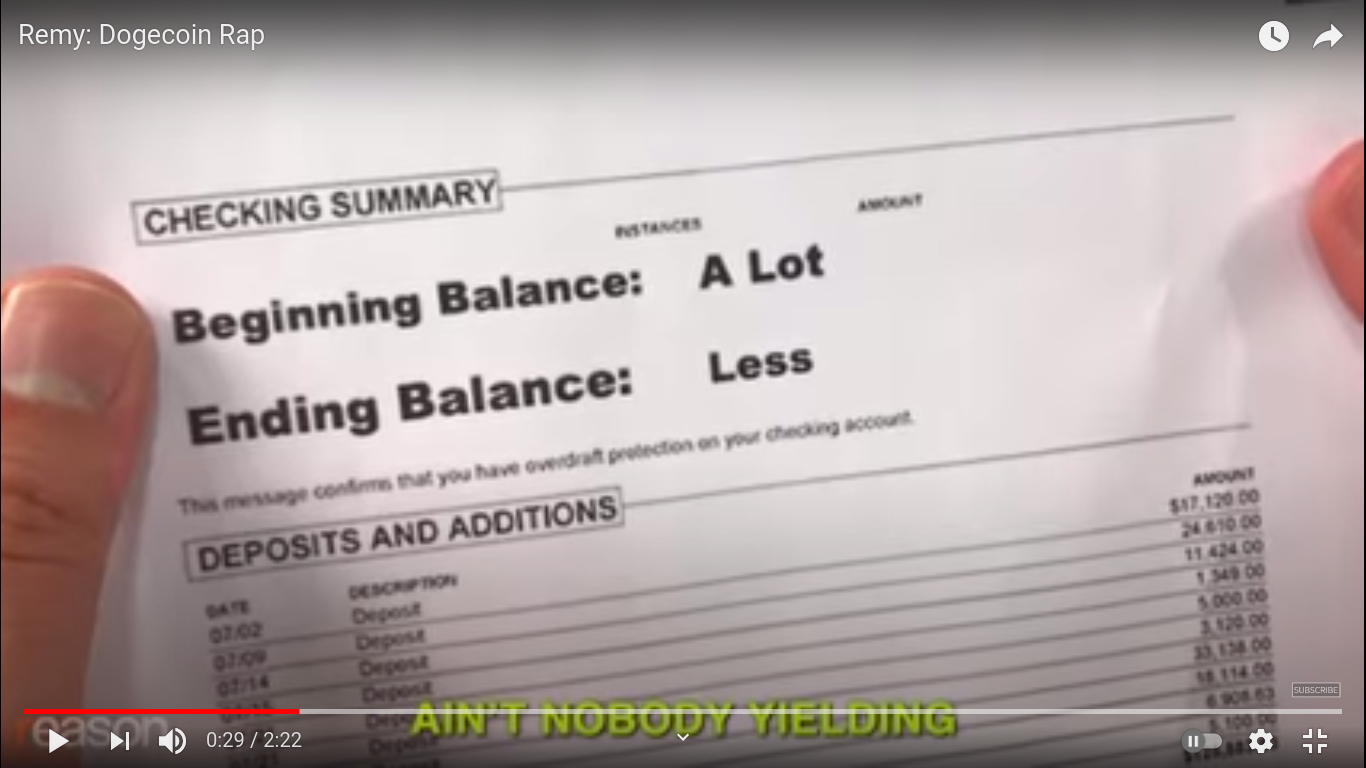 Again, we are shown just like with the newscast, here is a 'real type' of person who is being affected by the current financial situation.

What is he to do?
He shouldn't be in a drought
So he visits his advisor just to sort it all out 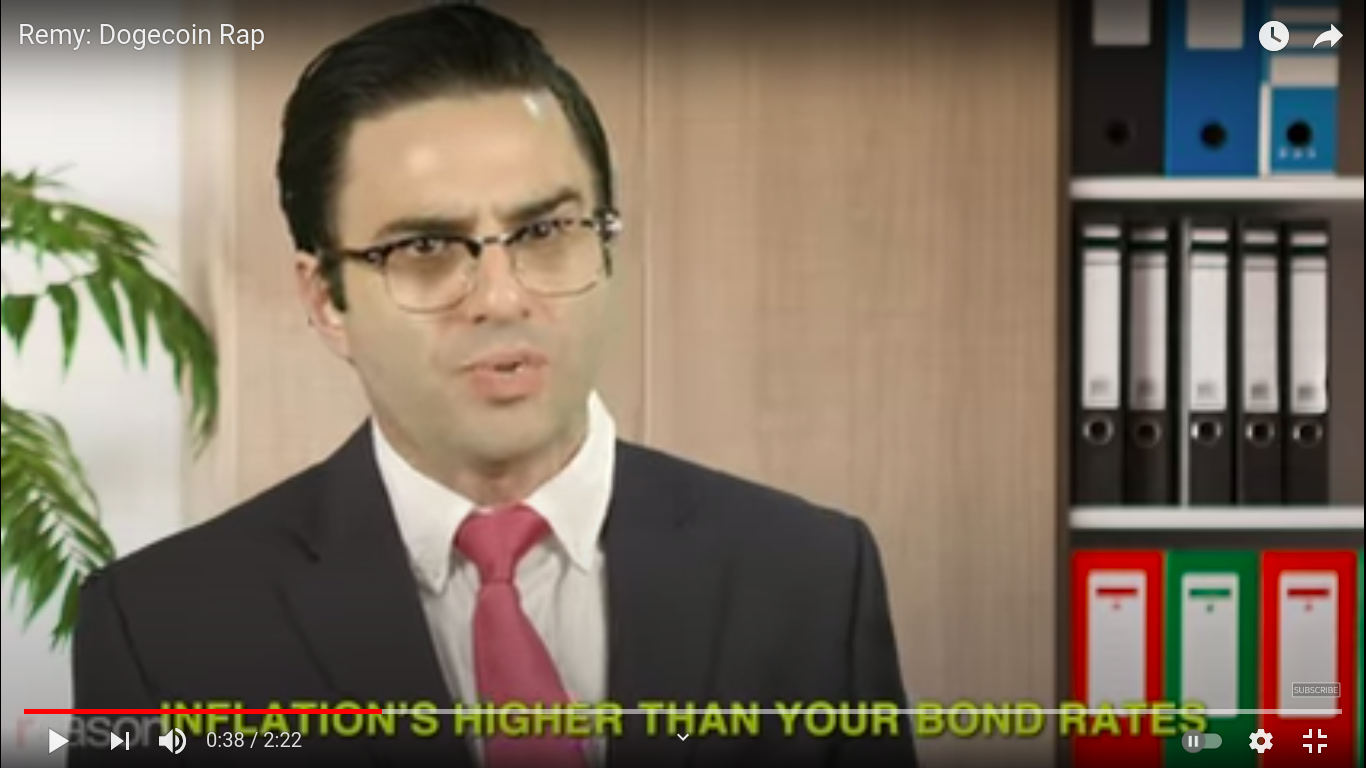 This is real, and must be what a savers and fixed income pensioners must feel like at a time like this. The financial advisor, who makes money generally on product fees, not performance, couldn't really give more than a single hoot. 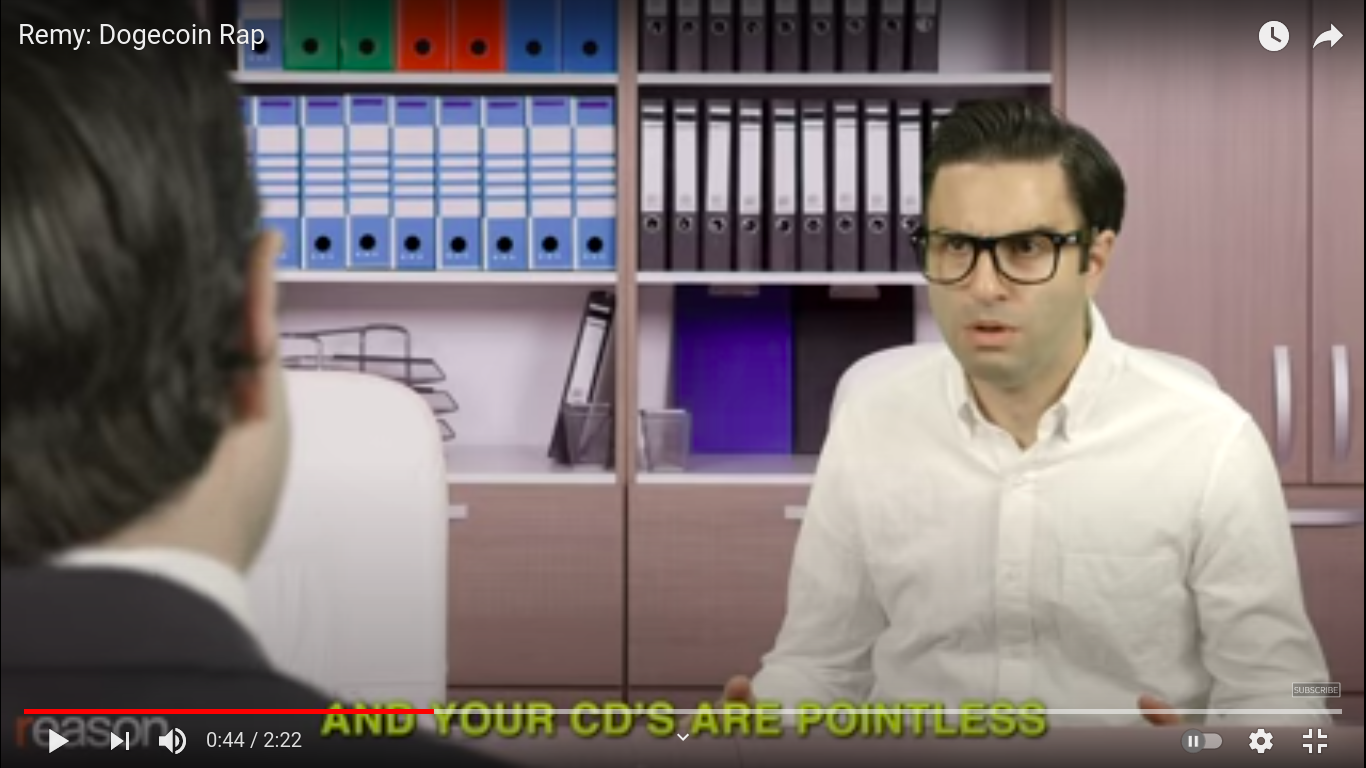 and your CD's are pointless
'That's not very funny'
What would you like me to do?
'Put it all in DOG MONEY' 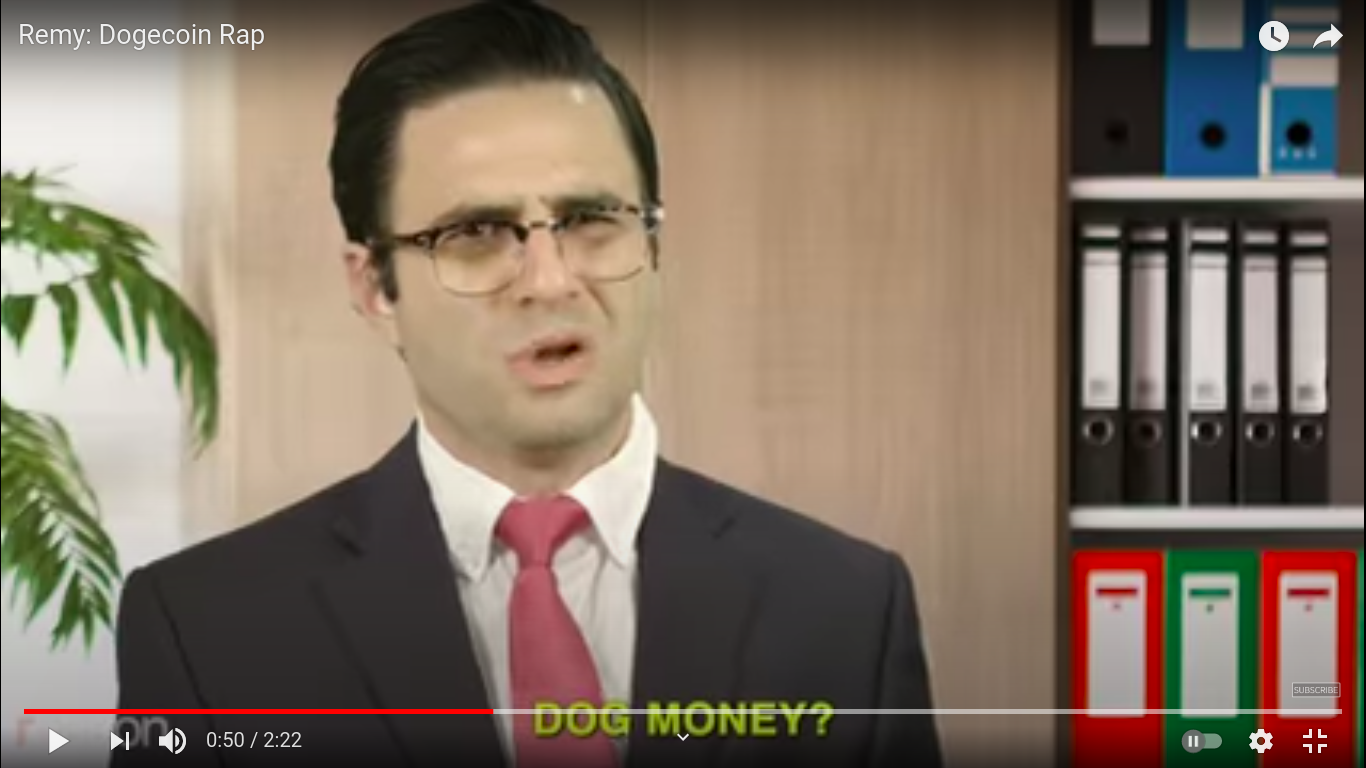 So here is where it gets weird. What does DOG MONEY aka DOGE have to do with the non-market state of the US dollar? The whole economy is linked, and when real returns are negative, high risk investments start to look really smart! This video is not about DOGE or its technical sophistication, based in the Litecoin network as it is, its about what happens to money when banks go out of control. What happens to value and its meaning? 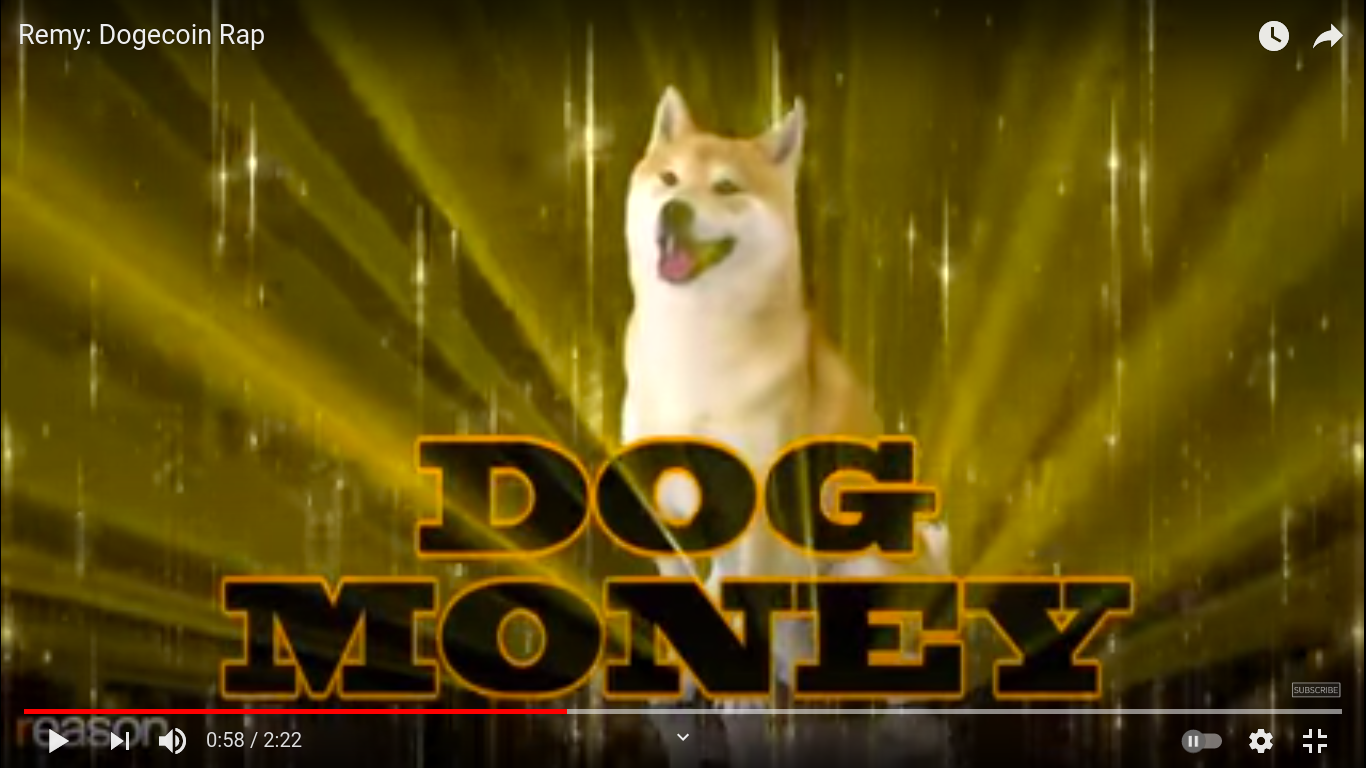 I will skip the middle part of the video, which is still a bit funny, it includes some non financial jokes and is mostly irrelevant to the discussion at hand. But we return to a Congressional Buget hearing, with the third verse:

One more Airbase
Two more museums
Three more walls
Four more Supremes
Five more stadiums
We're all out of Fiat
Can you take trillions of these and go make a Xerox? 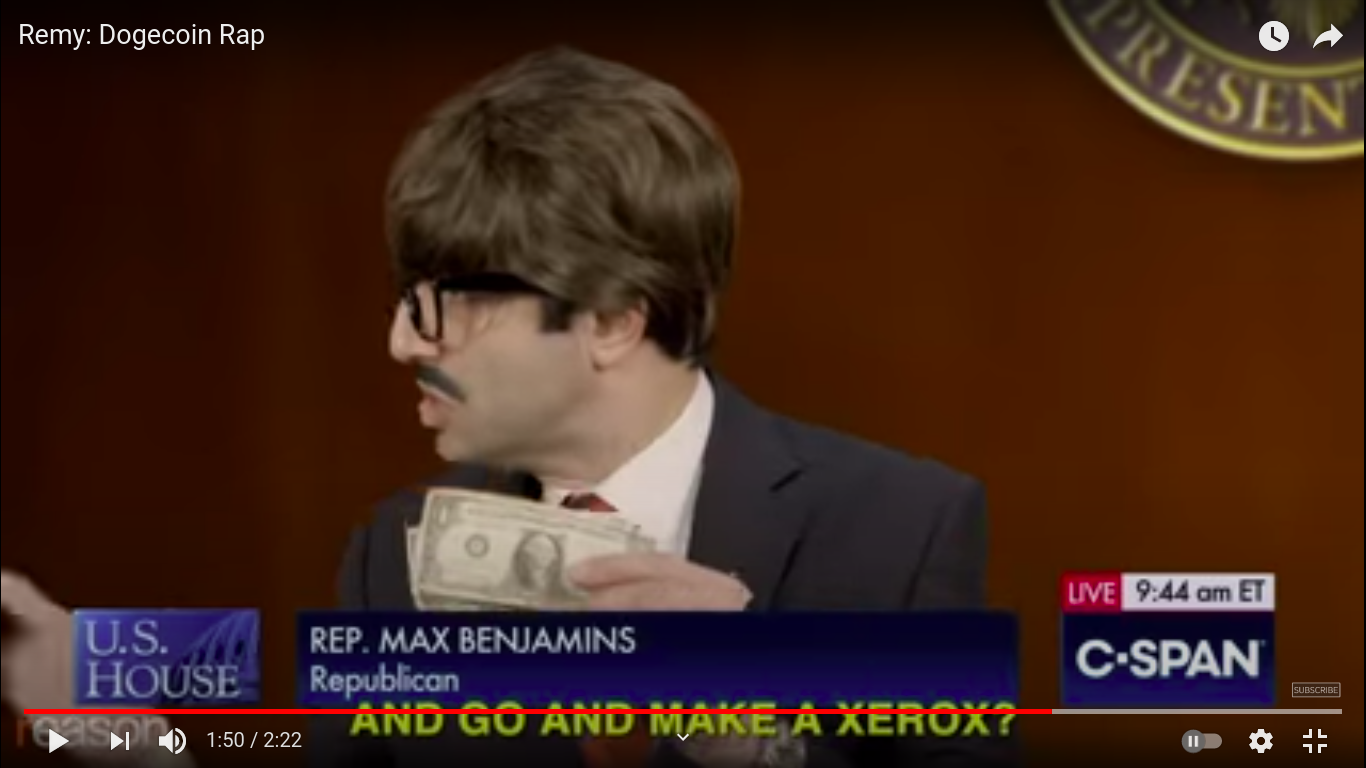 Undisciplined printing into the pockets of Cantillon Insiders. This is the heart of the matter, and it really impressed me how complete the argument finishes, with a QED:

We pay our debts in our currency
That might be unfurled
If its no longer the reserve currency of the world
'Confidence in the Dollar is Permanent, just ask any scholar!'
People are exchanging their dollars 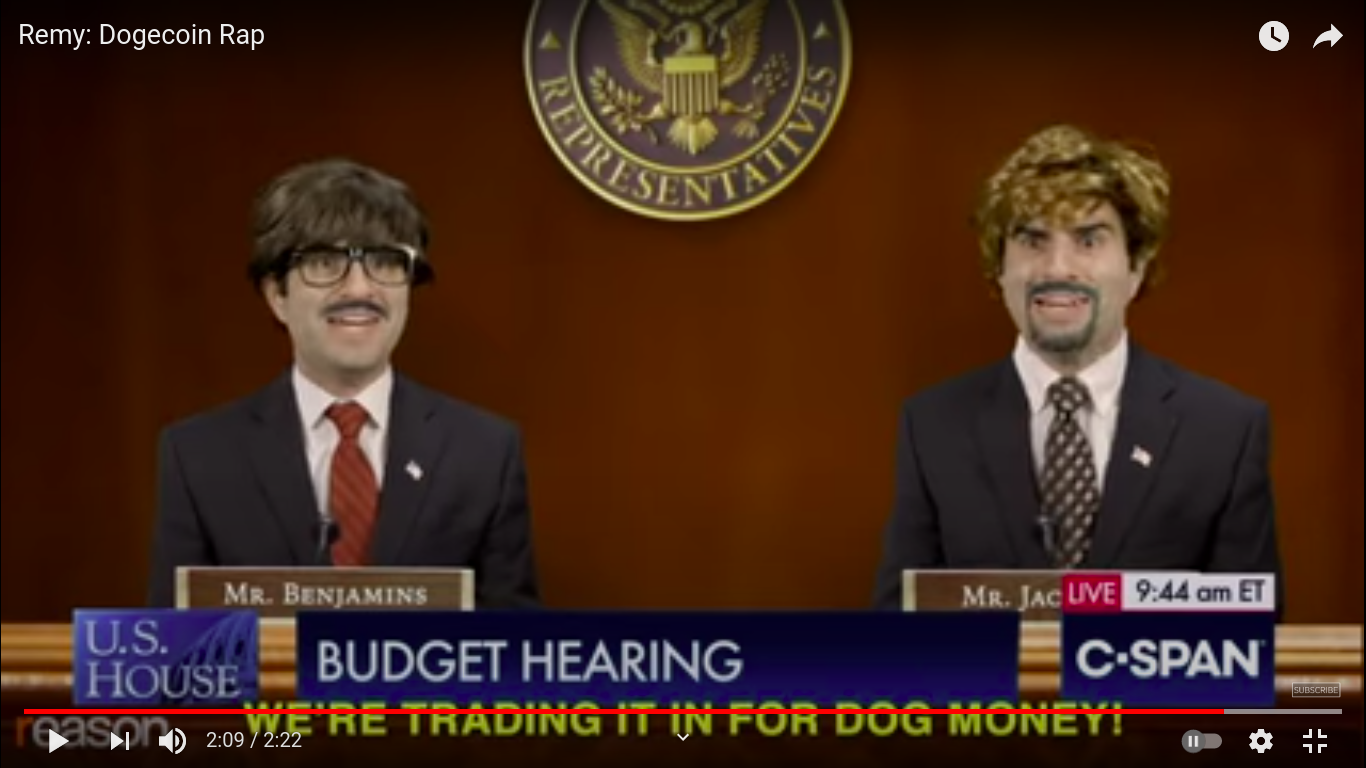 Yes Dog Money. People are exchanging their dollars for DOG MONEY and this is evidence that people no longer have confidence in the dollar. The entire video is worth a watch, as the congressmen get some sneaky looks as if they have found the secret of the universe.

And upon careful study of this video, there are indeed some economic lessons hidden here, and I am not the only one who thinks so according to the top comment on youtube:

Dog money or not, exchange your dollars for something of value before the music stops!

I have not bought any 'Dog Money' since 2017, but I am having difficulty selling it. It has been a full-time job for the last few weeks.

I deposited to hive-engine.com and sold for swap.hive! Good luck :)

Woohoo, that is funny, thanks for sharing. Sad but true, so many people are getting burned by inflation and don't even know it.
I'm putting it into "Cat Money" (CUB / LEO) ;)
!ENGAGE 20

@misterengagement 57
5 months ago
There has already been too much ENGAGE today.
0
0
0.000
Reply

Thanks for the share. He does make some good points about fiat and that there it doesn't make much difference putting it into "dog money". Bond interest rates are crap ever since QE took place so obviously saving accounts don't yield enough to keep its value.

Doge will knock Bitcoin off its perch. Its kinda logical because the internet runs on cats and dogs. That reminds me I should develop a cat meme coin. Anyway yeah that day will be a shock wave, a joke coin can be nigger than Bitcoin, anything can be bigger than Bitcoin. The start of Bitcoins demise.

Congratulations @ecoinstant! You have completed the following achievement on the Hive blockchain and have been rewarded with new badge(s) :