Wrapping HIVE | Data on HIVE wrapped by date and accounts

dalz in LeoFinance • 11 months ago

The latest development in the Hive ecosystem is wrapped HIVE or wHIVE.
Basically, its HIVE on Ethereum. This allows the HIVE token to touch the ETH ecosystem and exploit all the possibilities that an ETH token can have. The latest hot trend, DeFi and DEXes like Uniswap.

One might think why would I like to go to ETH from HIVE, from a fast a feeless network to a network with huge fees? Well most of the crypto action at the moment is on ETH, so this is basically a door into a billion’s dollar market. It can’t hurt to have the option. The announcement post for wHIVE came from the developer @fbslo Introducing Wrapped Hive - Hive on Ethereum!.

You can read more details there. Also the web interface for wHIVE is https://www.whive.network/

Few others community members @khaleelkazi, @cardboard, @jk6276, made nice posts and tutorials on wHIVE. You can check them out.

The possibilities for use cases on ETH can be huge. The obvious one at the moment is DeFi, or using HIVE as collateral or loan. For example, one can have some BTC or ETH, put it in collateral and loan HIVE. Then use that HIVE on the Hive blockchain for curation etc.

Amount of wrapped/unwrapped HIVE per day 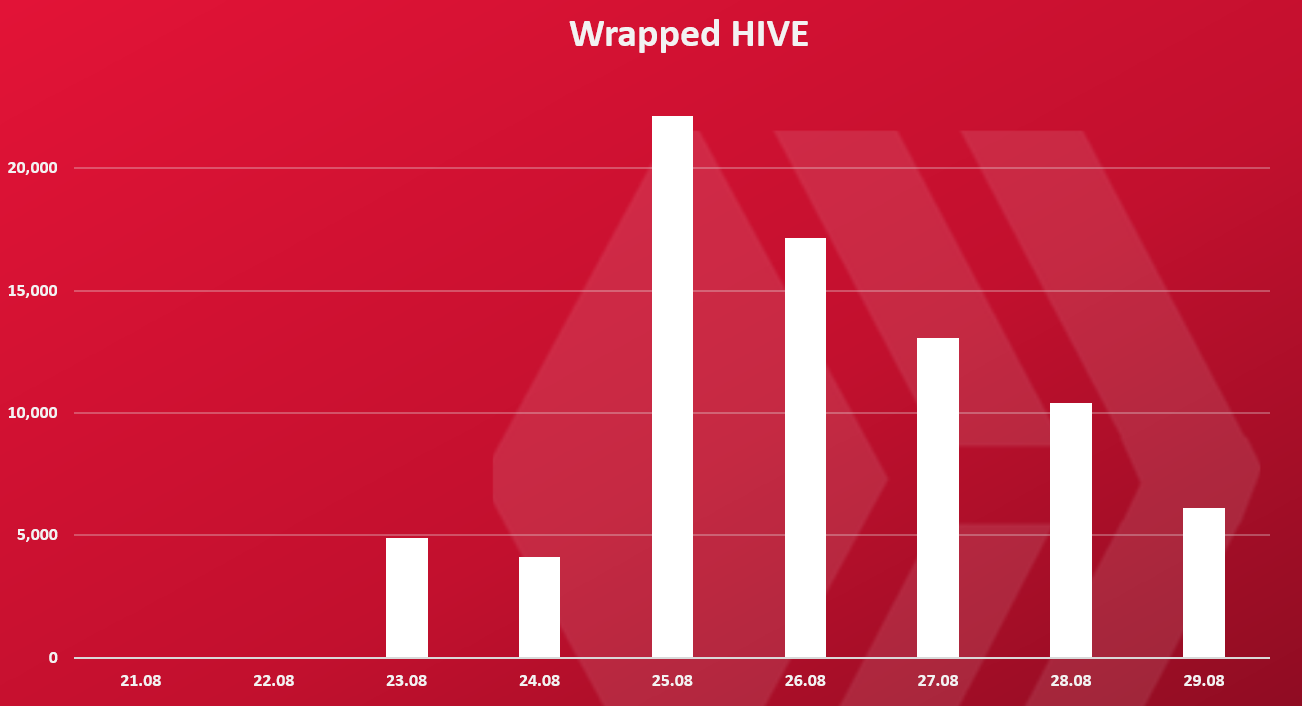 There is some small amount of HIVE wrapped on Aughust 21st, but some larger amounts came afterwards on August 23rd. Around 5k on that date. The record high was on August 25th with around 22k HIVE wrapped. The amounts here are overall smaller with the record high of almost 5k on August 21st and 25th. As of today, August 30, when I’m writing this there is also a big amount of unwrapping HIVE, larger than 5k, but because the day is not over yet, can’t close the numbers.

A total of 14k was unwrapped in the period from August 21st to August 29. Taking into account the ammount of wrapped and unwrapped HIVE there is now around 60k HIVE on the ETH network as wHIVE.

Who is doing most of the wrapping/unwrapping?

Here is the chart for the top accounts that wrapped HIVE. 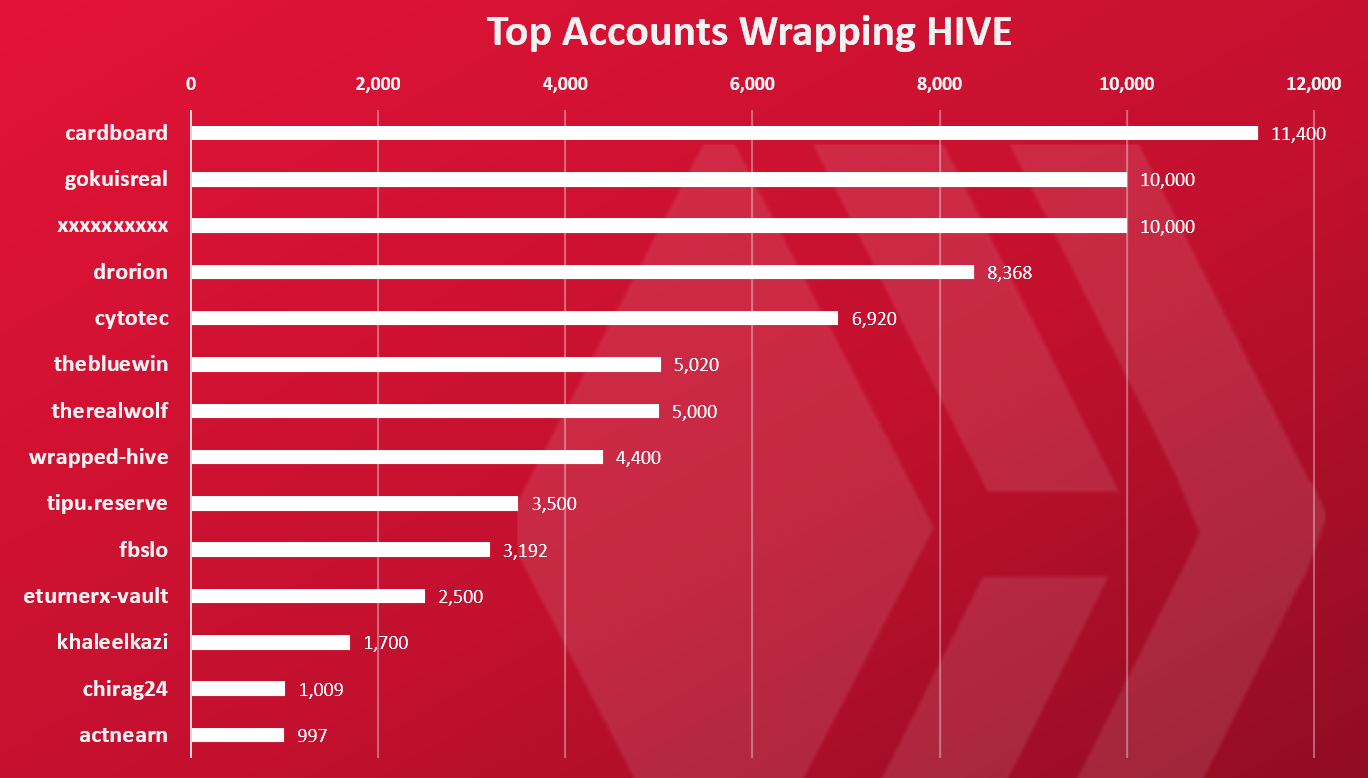 @cardboard is obviously playing around the most 😊., with more than 11k wrapped HIVE. Next @gokuisreal and @xxxxxxxxxx with 10k each. @thebluewin on top here with more than 5k, followed by @cytotec. The @wrapped-hive account is mostly for testing purposes. Cardboard has done some unwrapping as well.

Overall, these are very early days for wHIVE. In my personal opinion the potential is huge. There is already a listing on one DEX, Uniswap, where most of the speculation in the crypto world has been happening in the last months. More DEXes will probably follow. DEXes are on the rise this year and HIVE will do great if listed on more of them.

Will see how this plays out, but having HIVE this early in the DEX and DeFi game is a great thing.

looking foward to the exchanges like Binance being drained of Hive and it all being wrapped on Ethereum, and then used for curation. This could blow up if it takes off.

Yea its funy, how just one thing can move things so much.

I'm blown away with by all of this. I am so optimistic for Ethereum 2.0 and HIVE having access to DEXs like Uniswap is such a big deal. Thank you @dalz for such informative posts, you help me grow my [very limited] knowledge in this crypto space.

This move opens so many possibilities and reading your post I understood now the benefits. Thanks for sharing.

Thanks!
More options the better.

There's still platform risk since WHIVE is still centralised. So, I'm not risking too much right now. But yes, providing liquidity might help more people onto the HIVE. It's still a punt on ETH fees coming down though.

Yes that true. They have mentioned decentralizing it going forward.

The potential here is huge.

As you stated, it opens up Hive to a multi-billion dollar market. It is where the action is at the moment...at least in this regard.

Why don't Ethereum folks come over to the HIVE Blockchain and build something like Uniswap without those terrible fees.
It would make more sense to build it the other way around to profit from the free transactions on HIVE.
This is just my two cents on that!

@dalz Finally I found this post!
https://www.whive.network is currently under maintenance . How one can get data on who holds the most wHive? Did you parse the data yourself from wallet ledger?

Would also love to hear your opinion on the https://hive.blog/hive-167922/@jocieprosza/bootstrapping-whive-liquidity-via-provisory-solution

Hey... not sure why the web was down ... works now... I parse the data from the arcange sql hive database, basicly checking all the transactions to the account wrapped-hive

Do you provide some liquidity for wHive pools? If yes, please provide the address for the purposes stated in my post above

No I havent played around with it yet.
I might do it for LEO though :)

Let's hive on, then!
Cheers!

Oh goodness. So interesting! Looking forward to updates. I want to know more about it. Mind-blowing to me...
Have a great day, and take care 🥰🌺🤙

One more :)
Although I think we should have native ledger integration soooon :)

Well they already open source it, just yesterday ...
I dont have a date, few months were mentioned in the announcement posts