dalz in LeoFinance • 3 months ago

Hive is having some interesting price action in the last period. A sharp increase in the price, then a drop and an increase again. How has this effected the activity on the chain?

Let’s take a look at the number of active accounts. 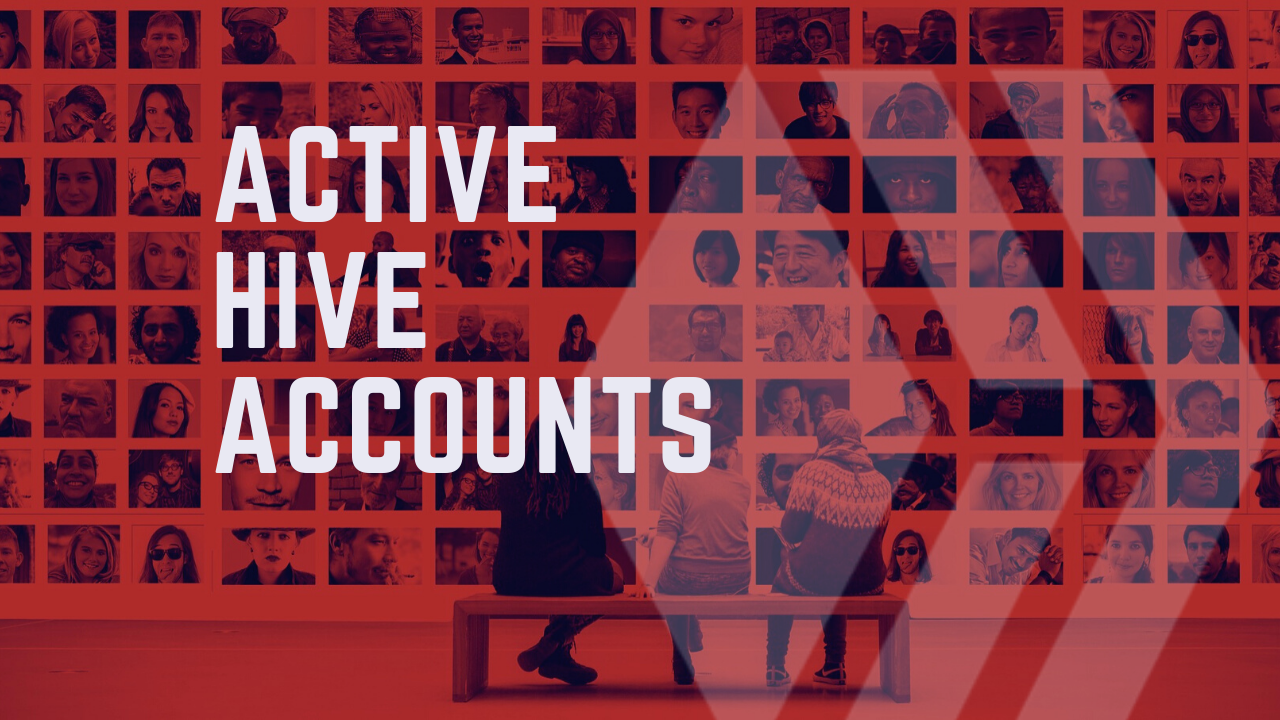 We will be looking at the activity on the chain by the top operations made:

We will be looking at the number of active accounts by the operations stated above for the period from April 2020 to February 2021. Hive was created at the end of March, so this period will cover the activities in its exitance. The above is the chart for DAU, for accounts making posts or comments on the blockchain.
We can see that after the hardfork the number if accounts posing daily is somewhere around 2800, than its went up (hint the price also did at that time), to almost 4k. Afterwards we can see a slow decline in the number of accounts posting and it the last period it dropped bellow 3k.

In the last period we can see the numbers growing again, more steady this time and we are again above 3k.

Later we see the MAU stats for the accounts that are posting and commenting. 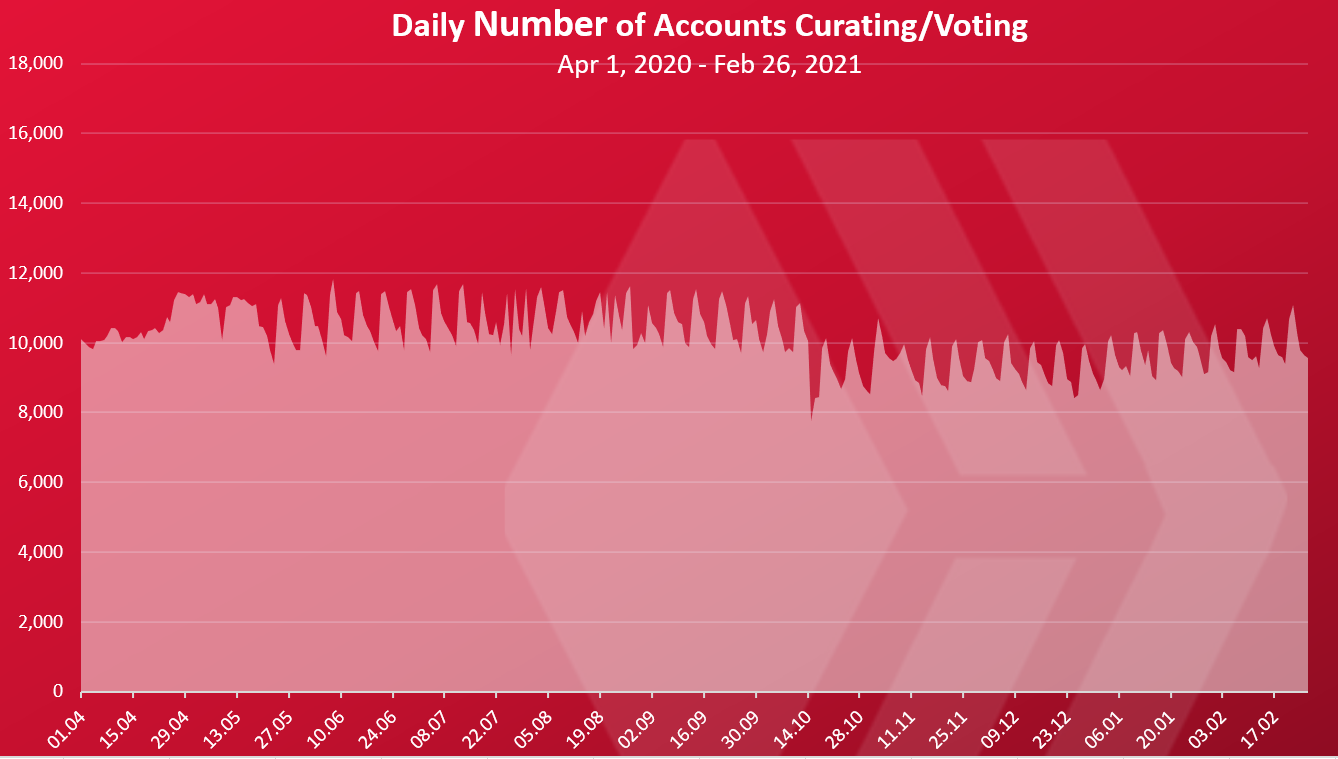 The number of unique daily accounts that vote is higher than the number of accounts that post or comment. Since the creation of the blockchain its almost constant between 10 and 12k per day. A small drop back in October, when there was a HF, and a steady increase in the last period.

Not sure what these up and down pattern is 😊. 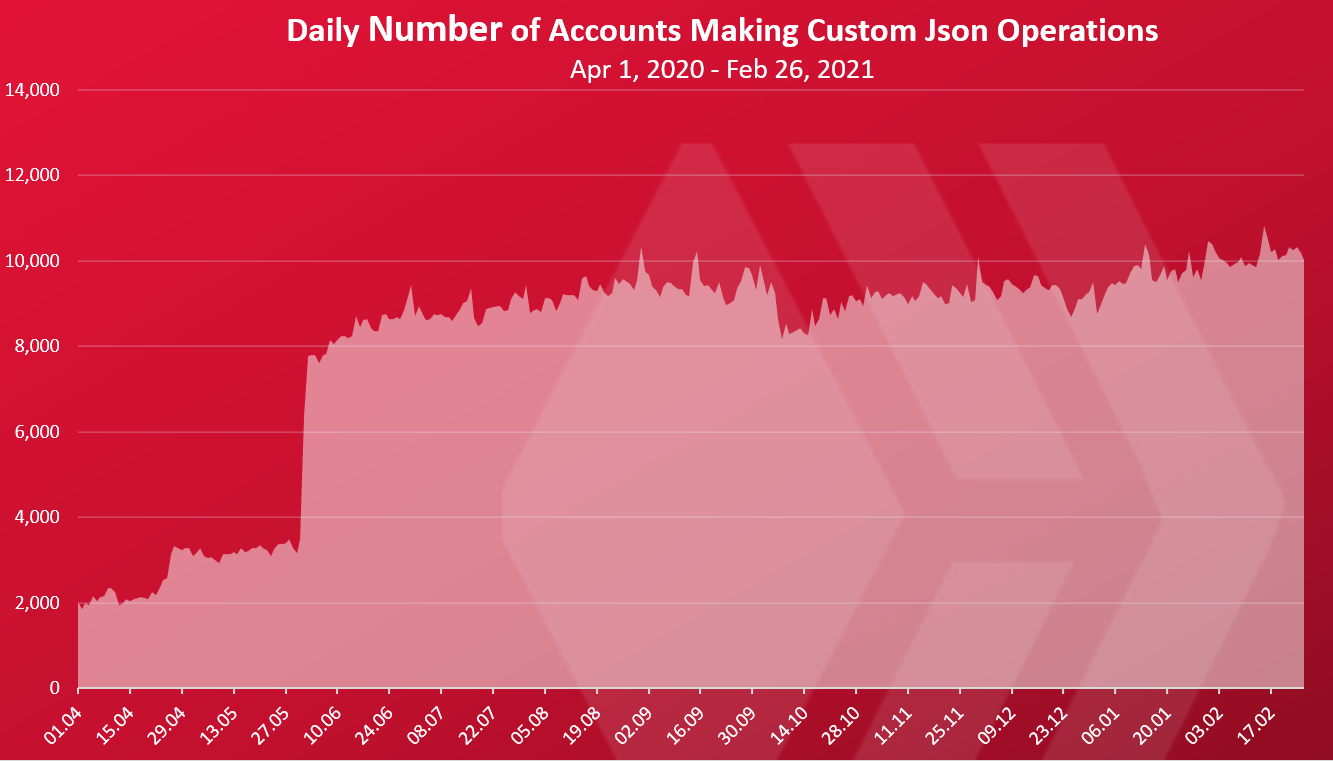 This is an interesting chart. We can see that the blockchain started with around 3k accounts making these transactions per day. Then a sharp increase to a 10k This is mainly because of the Splinterlands transition from Steem to Hive in June 2020.

Steady growth here as well in all the period. These numbers are compiled from the top 4 activities described above.
As we can see the number of Hive MAU started with around 24k, then it went up to 35k in June 2020. Afterwards a small decline to around 32k.

February is seeing a growth in the numbers of MAU from 32k to 34k. Since it is shorter month, we can say that February has the highest number of active Hive accounts in its history.

I have separated the accounts that are posting, and we can see that the number of accounts posting per month is around 10k, or around a third of the total number of active accounts, 34k.

If we make a breakdown of the active accounts by type of operation for February 2021 we get this. 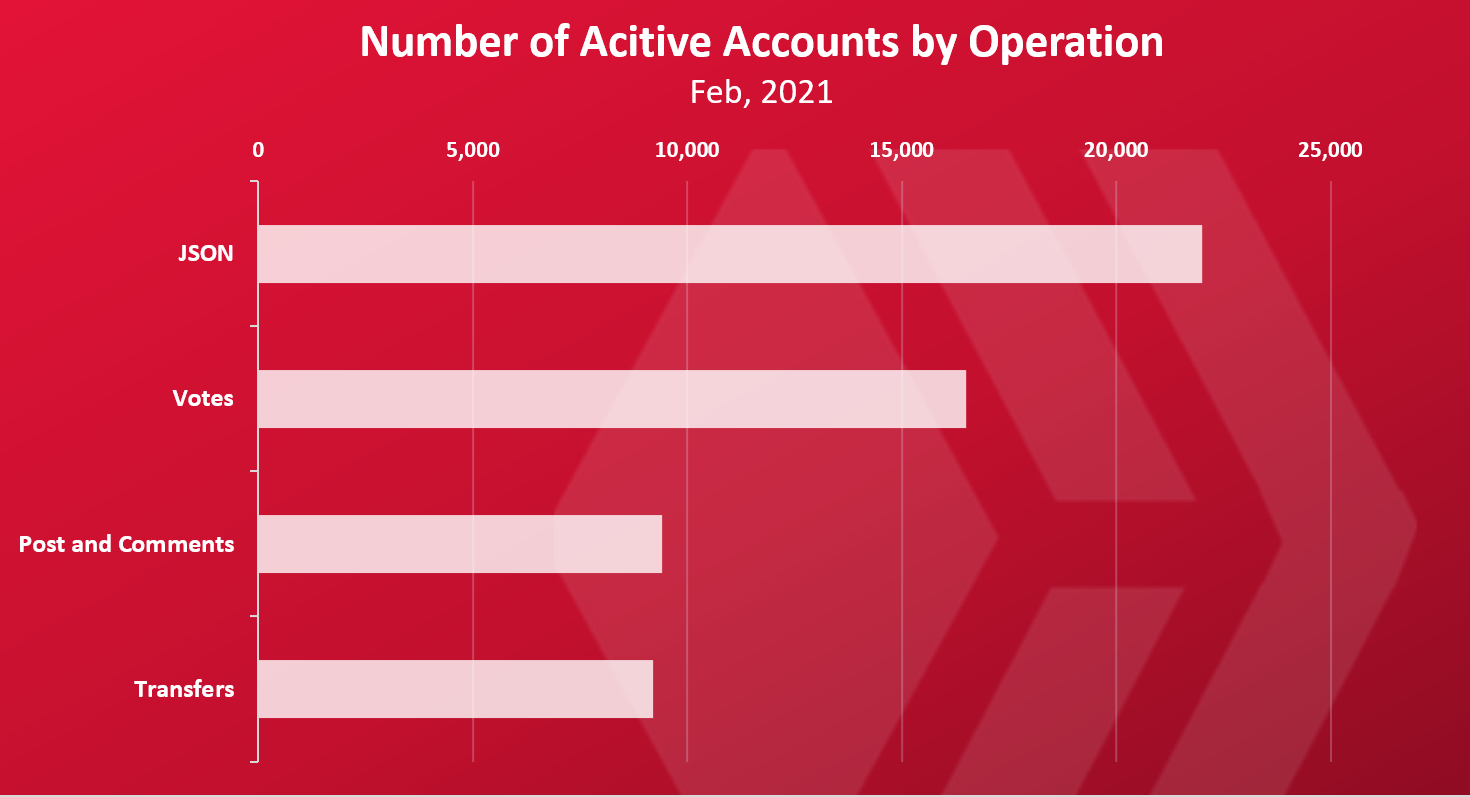 The custom json operation has the highest number of accounts with around 22k accounts making that type of operation in February 2021.

Votes comes second with 16.5k accounts and then is posting with almost 10k accounts per month. The number of accounts making transfers is almost the as posting.

The number of readers is not stored on the blockchain. The interesting thing is that there is more than one frontend to the blockchain, no there is no one single point of entrance to count.
According to https://hypestat.com/ the numbers for unique daily visitors at the moment are:

The other interfaces and tribes have some more. Some of them may overlap but I would give a rough estimate of more than 250k daily overall daily visitors. Have in mind this is very rough estimate.

Nice to see some growth in the numbers of active accounts. The growth seems to be more steadier this time than back in May/June last year when Hive pumped to 1$. A lot of development is happening on the chain now, especially on the 2nd layer apps. WIll be interesting to follow how things evolve in 2021 :).

Members are being proactive letting people know about Hive, slump was expected with switch over and negative feelings. Many possibly now return seeing Hive is developing all the time.

Thanks!
Great to see some numbers in the positive.

I think there is a weekly cycle to some of the stats. Some people may be more or less active on weekends. There are lots of new accounts being created, but we need that to translate into active users. Those who do join up need to be encouraged. We lose too many who just give up.

3000 real persons interacting with the Hive ecosystem daily in the myriad of ways is it possible to do it is already 10 times more than all those highly marketed, celebrity-shilled, funds pumped "breakthrough DeFi/NFT projects" running on Ethereum, and don't make me start talking about ADA or DOT haha...

Its more than 3k if we take into account all the type of operations. 3k only posting.
Its somewhere between 5kk to 10k per day and more than 30k per month.

Nice to see an attempt to count the readers (the audience) of the Hive blockchain.

Peakd has its own viewers counter system, which works at the page (post) level, but only for posts seen through their interface.

Yea its bit hard to count the readers, since Hive have many faces :)

Yeah, I know. One solution would be to develop a plugin to do that, which the main interfaces would integrate, and then combine results. But then, there would be overlapping. Plus, there would be a difficulty in creating such a plugin that works on different interfaces.

@splinterlands has been doing a great job too:

Games are the best thing that happened to HIVE ecosystem at least for the short term. So far I think it has been the best kind of onboarding tool we have created. If NFTs get the level of atention ICOs did, we are going to be seeing a great time for @splinterlands and many other HIVE games.

It is good to see an increase of the activity on Hive. More active users means growth for the platform. I hope we got more people in the following months.

The number of readers should remain on the estimation box as one reader is likely to revisit a post more than 5 times in less than an hour.
For example; a contest post which the host normally visits its post to read comments.

Okay.
I think their IPs are used to calculate the number

These all look like bullish trends to me, hopefully we can see those all time highs again soon. I've been trying to onboard my friends!

I'm glad you looked at multiple front ends for viewership.

This year will see a lot more new users because many people are talking about Hive on different social networks and forums. I heard about Hive on Youtube, and a few days I read about it on the Bitcointalk forum! This is very helpful, I will refer my friends here.

That's an impressive figure - seems we are getting noticed.