If You Can't Explain The Yield You Are The Yield

I've been watching this DEFI yield farming narrative take hold in the shitcoin space after the let's raise money for stupid projects ICO phase failed, then the net's own things that have nothing to do with the blockchain NFT idea failed after the everything needs a token narrative failed.

Now DEFI started out as the creation of liquidity pools, where users could pool together two assets and make an automatic market to trade two assets. Now on the surface, this is not a bad idea, in fact, it's a cool idea, but it does come with considerable risk in its implementation.

The larger a smart contract gets in holding the more risk it poses and the more it encourages people to attack any insecurities in that so-called vault.

Now to get people to discount that risk, you have to offer them a return that is so stupid that they think any risk they take will be worth it, and that's how DEFI was bootstrapped.

Now we have a world where people are spinning up smart contracts and offering 100, 200, or 1000% returns but no one asking where these returns come from, they're just thinking about half of the equation. 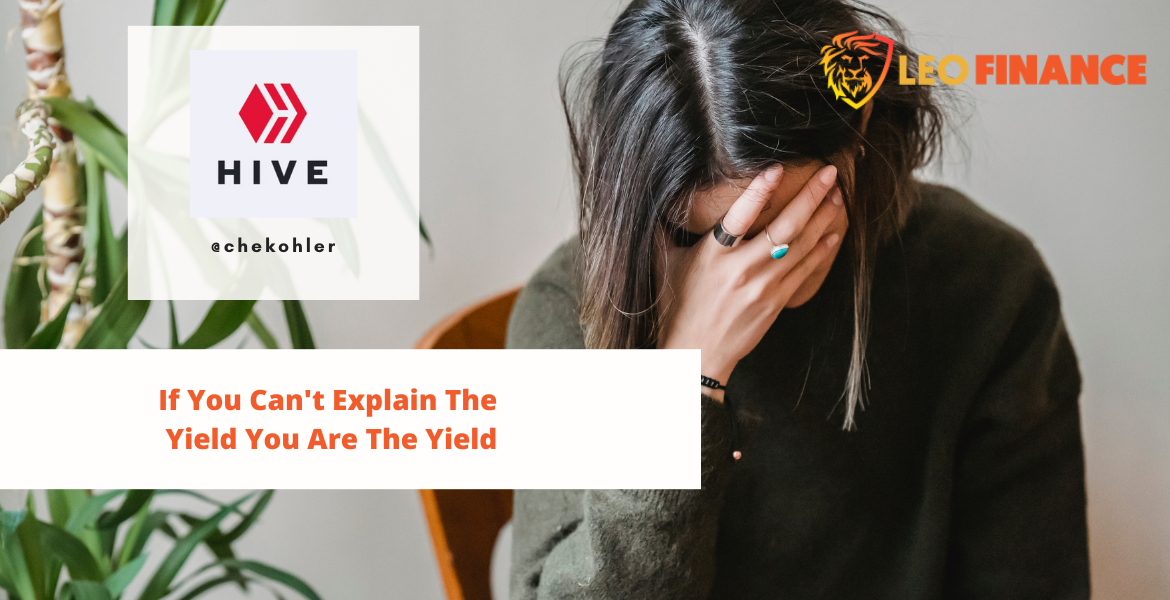 Where do the returns come from?

Now there is an element of truth to a small part of the returns that are conflated with lies. The truth is there are some fees to be earned as the platform charges to swap between pairs of assets, but this is NOT enough to keep the platform attracting users to fund it.

The returns are either subsided by a third party, as in the case of the bigger projects like Luna, Uniswap, and Pancake swap. If they don't have big backers bootstrapping them to scale where it's big enough to dump tokens on the market to make back the return, then you'll have to come up with clever ways to do it.

So what do these DEFI platforms do? Pay you with inflation of course, tokens that they can print out of thin air so they can create any amount of yield they like as long as it looks attractive for marketing purposes, and pulls in suckers.

Now as people chase the yield those that get in first or those who gifted themselves with pre-mined tokens and airdrops get to dump into the demand craze for that yield and realize their return.

The rest sit around trying to bleed out any liquidity that does come from new suckers or from the Trinkle amount of fees earned through their service.

Now as more and more DEFI platforms are spun up to meet a certain demand, there is always going to be an oversupply of more and more shit you don't need. As more tokens hit less demand, they eventually trend towards zero.

All DEFI tokens make zero sense long term, they are a waste of your time and consideration. If they were a promissory note to access the growing treasury at a certain rate that would make sense but no DEFI token is doing that.

I could understand having the token as a debt instrument, and then having a set repurchase window that grows as the treasury from fees gets bigger. So let's say the trading pair is USDT/BTC, as the fees earned from that increases, you back the token, be that 1000/1, then reduce it until its 1-1 with the intention of destroying the token altogether and then leaving the established market to run and people who supply liquidity earn the fees of a scaled market.

Again, with risk as I mentioned previously.

Anyone selling you on DEFI either ignores what I've just explained or doesn't take all of 15 minutes to understand it.

Either way you're probably going to end up with a handful of a useless coins and if that's your goal, go right ahead.

That’s about the best explanation of how it all works, I have read. It’s all fughazi, air, and nothing more than that, but then packed into a marketing show. And apparently that’s enough to lure in suckers all over the world.

The path to enlightenment seems to be pretty straightforward:

Don't trust people on the internet.

Lol trust is something people give away far too easily, look at the people using celsius now, they'r funds are frozen because they trusted a service who aped their money into DEFI Will Celsius own token reach 0 do you think?

Lol isn't it already? It's already cleared off over a billion of its market cap, they cannot honour redemptions and they're getting rekt in trying to provide a price floor for their CEL token, looks like they trying to raise funds to cover in the meantime, after rejecting nexos offer to buy their books

Nexo next do you think?

Doubt it, Nexo didn't ape their funds into stETH and Luna, they banked big on the ETH merge and now that the stETH peg is breaking they cannot recoup their funds to remain liquid,

NEXO shares their attestations with you and have tried to limit exposure to US customers, unlike Celsius, not that I am a supporter of NEXO i've never used them, I do think they all living on borrowed time

But If NEXO can salvage celsius and assist some normies to get their capital out, cool, if not they learn a valuable lesson

Yeah, there are still many red flags about Nexo though. Enough to lap Brands Hatch.

What strategy do you follow now with the drop in BTC? What does a Maxi do?

So all my limit orders got cleared out, so I set aside capital at different ranges a lot lower to try and catch any deeper discounts, and have my daily autobuy going

And then remove those coins and move them to self-custody, nothing glamorous, just about taking risk off the table and increasing the amount of sats I have, which is so much easier during times like this

I can see this going way way lower

Thanks, that seems a smart strategy.

Yeah there’s a lot of people saying how epic yield is in some spaces. It is because people keep getting conned into adding themselves to the “yield” lol

Lol no yield comes without risk and the higher the yield the more the risk, but what people don't see is the outsized risk being taken for that return well until its too late.

The whole fiat game is based on yield, I just sit on my bitcoin and get CAGR, I know I take zero risk just my key management risk