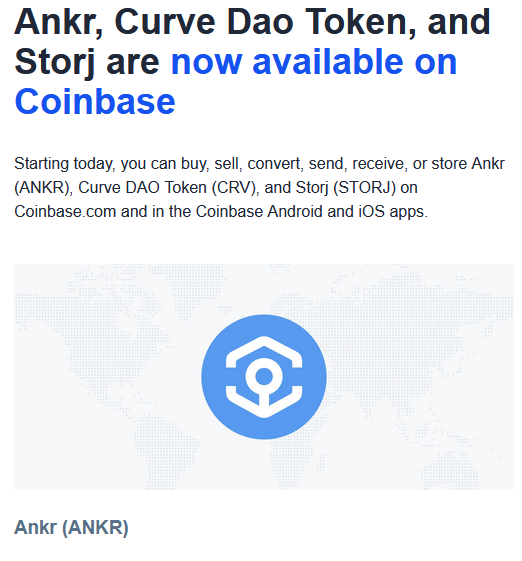 I was flipping through my Google news feed a couple of weeks ago and it never fails that one of the stories is about some "influential" person recommending this token or that token. The headlines are all pretty similar. They look something like this "(insert name here) talks about about the five altcoins they are betting on for 2021". Just swap out the adverbs and the names and you pretty much get the picture.

Sometimes they don't even give the names. They jus say, "wallstreet guru" or something attention grabbing like that.

In any event, my attention was grabbed on this particular occasion and one of the tokens that they were talking about was ANKR. I've always wanted to dive into one of these up and coming tokens. The idea just taking the advice of someone I have never heard of before and having it pay of big is very attractive to me.

Of course I could lose it all too.

Needless to say I passed on this one and then was confronted with this news just the other day.

You have got to be kidding me! Notice I didn't get into the specifics about what the token does because that doesn't really matter since I didn't purchase any.

What does matter is the fact that typically when tokens get listed on Coinbase like this, the price tends to skyrocket. Okay, to be fair, the increase isn't as much as I was afraid it would be. The fact remains that if I had purchased ANKR when I first heard about it, I would have gotten it for around $.025 per token. Highs after the announcement put it right around $.134.

Yet another missed opportunity. Thankfully, I don't feel as bad about this one. Since it is over on the ETH chain, I know I would have probably paid insane fees just to swap into it. Probably enough that it wouldn't have made it worth it. At most I would have been investing maybe $300. That gives me about 12,000 tokens. Minus the $50 to $75 Gas fees I would have needed to pay.

Should I take the gamble next time? Is this how the big fish get to be big fish by taking small risks like this?

It is completely up to you but people sure like buying the new shiny thing. It works until it doesn't so only play with the portion of the account you can afford to lose.

Right, for sure. I try to keep a little bit of "gambling" money on hand, but it doesn't always go very far!

I was right there with you. I saw that notice too in my email and thought about jumping in, but remembered that old adage "buy on the rumor, sell on the news." The world of crypto is like a ferris wheel, there will always be another go-round.

Yeah, for sure. I have all of my stable investments in other stuff. I like having a little bit of gambling money free to throw into something. Unfortunately most of them these days are on ETH so that little bit of money doesn't go very far!

a small loss, but a new opportunity will come with the new bull rally of BTC many of the cryptocurrencies that now cost pennies will literally explode!

I hope so. As long as I am holding one of them I guess!

I think it was still good buying 2 days ago. Still us currently and I'd anticipate the token reaching $1

I thorough a $50 at it. Hoping to use the increae to bring here and buy CUB/Leo