Users earning LEO , have they voted for LeoFinance as witness? Analysis .

Good evening to one and all . I hope you all are doing great .

I have been doing some analysis of various projects here on Hive . Although I discovered Hive ( STEEM ) in its early days , I didn't stay . I came back in 2020 November and I started being active from then on , the real reason behind this is LeoFinance .

The linear curation reward implementation , the onboarding process , the manual curation by whales , comments getting recognition , all of these impressed me a lot and I not only decided to stay but I voted LeoFinance as my witness as well because of all the great contributions from them to Hive ecosystem .

Today I want to share with you guys some data regarding LeoFinance earners and witness votes .

Couple of months ago ( when I cameback to Hive) LeoFinance was at 30th position in witness ranking . Today we are at 24th position .

We have to climb 4 positions from here .

If you haven't voted yet , please visit here and vote now -

What data am I sharing below ?

This will be a long post again so bear with me .

What steps have I followed to arrive at final results ? 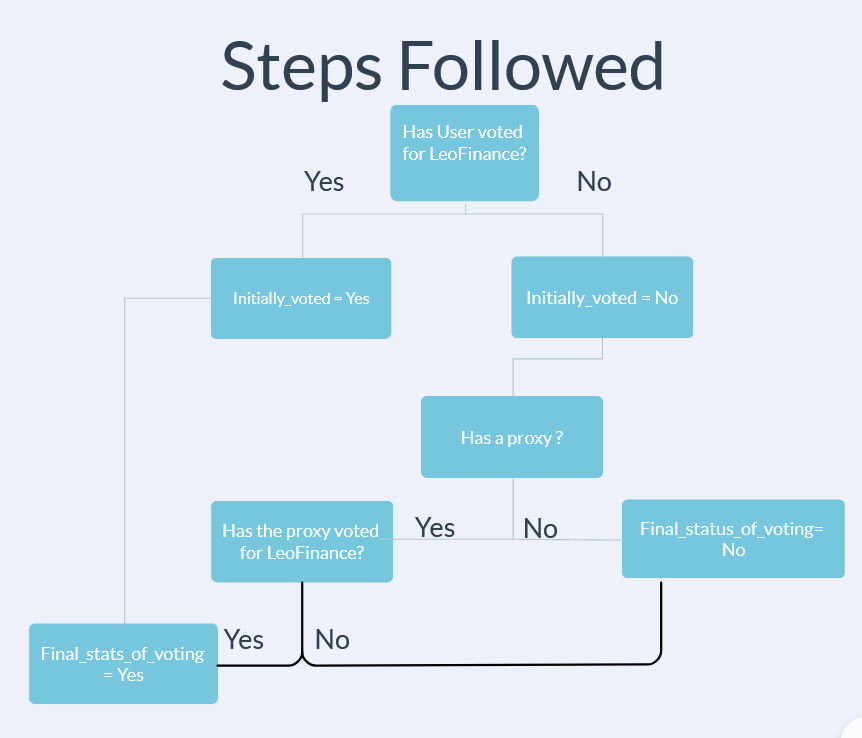 Total users who earned Leo during this period = 2759 users .

Out of these 2759 users,not considering proxy- how many have voted for LeoFinance as witness and how many haven't ?

What does this tell us ?

Now among those - 158 have actually voted for LeoFinance through a proxy .

Out of these 1890 , 80 have used proxy but those proxies haven't voted for LeoFinance . ( Keep this in mind because we will come back to this later ) .

Remaining 1810 have neither used proxy nor voted themselves for LeoFinance .

Now shift those who have voted through proxy to "voted" side .

Now this is the final status . Through proxy or no proxy , these are the number of people who have earned LEO in the above period and their voting status .

So if we take the 1890 people who haven't voted for LEO , they are earning more than the 869 users who have voted for LEO as witness .

But without taking HP into consideration , we cannot do anything .

What does this mean ?

See there are many users who have created a separate account for tribes ( me too , @amr008.leo ) .

So if we have to infer something , we gotto take HP into account too . Let us see that now .

These users forms the majority . They haven't earned too much of LEO , they have earned between 0.001 to 10 LEO in the above period .

This is good to see .

We are seeing a pattern here , are you observing ? If we take the amount of LEO earned , as it increases the number of users who have voted for LEO also increases .

Now most of them who have huge HP have voted already . Those who haven't voted have just 71k HP with them but they should definitely be voting for LeoFinance .Most of these accounts are actually Leo team accounts except a few which holds very very less HP except for one user who holds 90% of 71095 HP .

Now note that , there are actually many users who have voted for LeoFinance as witness but haven't earned LEO in the above mentioned period . They haven't been included in the post because they haven't earned any LEO .

2M HP can actually be done by the users who belong to 10 to 100 LEO earning category . These people should be our second priority .

First priority must go to the users who are earning between 0 to 10 HP .

These 1890 , if we get them to vote for LeoFinance by showing them how LeoFinance is contributing to Hive ecosystem we will reach the top 20 .

We don't need to focus on those ( right now ) outside of LeoFinance at all . We should focus on those users who are earning LEO itself , they can make us hit the top 20 .

That means we need to create more awareness , it's not like they aren't supporting LeoFinance by supporting others , it's just they have no idea maybe about all this .

That's it from me today . I hope you got some kind of insight from this post .

Gotta wonder why the price feed hasn’t been updated for so long:

You are right. This is not a good look for a potential top 20 witness. I realize that @leofinance has a lot of pans in the fire, but as a witness it is important to have a current price feed.

True , I am not sure why it has happened too .

Hello , I am voting for this witness but do leo platform has different witness then hive.

Or if i vote for someone on Hive as a witness then automatically vote goes at leo as well.?

You are mixing the two voting areas up.

Witness votes do not affect your VP. That is for content voting. When you vote for a witness, that is a governance vote. It matters none what tokens you are holding other than HP. That vote does not take away from your VP.

When upvoting content, it will vote whatever you have in that account. So if you vote someone with LEO, whatever Hive Power is in your account will be added.

Thank you for explaining. So I vote with both LEO ad HP at the same time even if I vote from Leofinance.io front-end?

I'll follow you and don't mind if I ask a question or two again from time to time.

Sure. Feel free to ask question here on in DM. I would be happy to help you out. :)

I think @taskmaster4450le explained it better than I ever can . Did you get your answer ? If not feel free to ask more questions . Voting for witnesses is something we should take very seriously .

This is a great, albeit long, analysis. We need to push Leo users to vote for the witness, especially if they are receiving upvotes on their LEO votes. There is no reason for Leofinance not to be a consensus witness.

This is a great, albeit long, analysis.

There is no reason for Leofinance not to be a consensus witness.

Totally , LeoFinance will be the first tribe to be in top 20 if this happens .

We are getting there! I'm going to start making a push for this myself for LEO to get in the top 20. Let's make this happen! I'll be reaching out to many of the people I have onboarded through LeoFinance this year so far and show them how to vote and why to vote along with all LeoFinance and their community does for Hive and it's growth.

Saw your post :) Glad to see this . Let us push it as much as possible , it will help LeoFinance as well as Hive a lot if we get it above 20 .

Very good information and it sure does seem like there are quite a few people who have voted for no witnesses. Given that LeoFinance is one of the biggest and rewarding tribes, I think it should definitely be a top 20 witness.

seem like there are quite a few people who have voted for no witnesses.

Almost 50% of non-voters of LeoFinance yeah .

I'm not surprised by the number of people receiving votes who haven't voted for the witness. It can be a bit confusing at times as shown @kamran-rkploy's question below.

I remember reading a post some time back about voting for witnesses and, after following the link in that one I got totally confused where and who I was voting for.

There seemed to be 2 different areas. I'm not sure even now that I've done it right.
.

Hm I agree . I always go to https://peakd.com/me/witnesses to vote for witnesses . You can see whether you have voted or not in the right hand side ( tick mark ) .

I proxy my vote to Leo. I trust the team and I know that they are going to be voting for witnesses who are committed and involved in the community. It is so easy to proxy, I don't know why more people don't just do that.

Me too and if we just go to @leofinance we can see the option right there .

I think it is because of lack of awareness we are not able to reach top 20 .

Yeah, it is so easy and smart!

Yeah I saw that which pulling the data :)

But seems like a lot of users haven't done it yet .