agr8buzz in LeoFinance • 5 days ago

Tech in itself is not evil, after all it's just lines of code. NSO Group founders likely don't have bad intentions, however there will always be groups that want to use any and all tools at their disposal to spy on you. Pegasus spyware is a product of NSO Group, a tech start-up founded by a couple of Israeli 20 somethings. I think chances are they were a couple of relatively naive kids with an opportunity to make a profitable product.

NSO Group founders Shalev Hulio and Omri Lavie say they are "saving lives", but I think that's a pile a PR bull. They're a business making money where they found an opportunity like everyone else.

While they're product was likely initially conceived to help authorities put away bad guys, what they have inadvertently done is empower corrupt agencies who use the tech for what could be illegal and nefarious purposes.

NSO Group founders should probably be looking in the mirror and asking themselves the question.. Are we the good guys or the bad guys?

The way I see it is the problem is two fold. Firstly the product they make is being used by clients who give zero fucks about your privacy or rights. Secondly the company and founders are compliant in allowing this to happen by withholding exploits from the likes of Apple and Google.

Israeli company NSO has apparently licenced the Pegasus spyware to as many as 60 undisclosed intelligence, military, and law enforcement agencies around the world.

Is Your Phone At Risk?

There's an ETF called HACK that I've traded for many years now, almost since it's inception. Whenever a large scale hack is reported it's a sure bet the price of this ETF moves up. 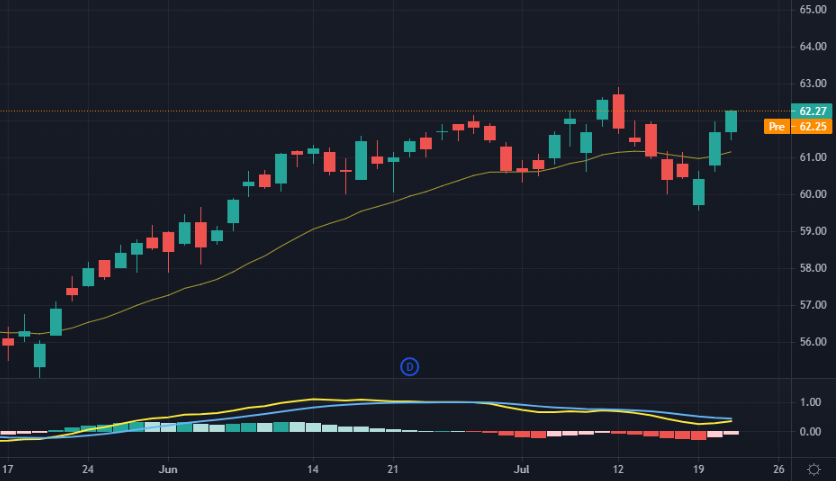 The ETF's Price is up about 4.2% since the news of Pegasus broke a few days ago!

HACK is a Cyber Security ETF from ETFMG which currently operates 18 ETF's traded on US markets with over $7 Billion in assets under management.

Part of me has to ask, do you think Google or Apple were aware of the exploits being used and left them open for a prolonged period of time?

After all we now know Google was partially established by the CIA and NSA in an effort to speed along mass surveillance of the internet.

Who's to say some exploits aren't deliberately put there, these guys are all playing for the same team.

My hope is that more and more people start to take their privacy more seriously and wake up to the insane level of mass surveillance and spying that is happening everyday through your web browser and your mobile device.

There is software available to help move you away from some of this potential spying (Brave, DuckDuckGo, Signal, Proton Mail & VPN), and my hope is that we start to see more hardware available for these purposes, to protect your data and right to privacy.