The Therapist: My Thoughts On The Nollywood Movie.

Hello everybody, this is my first post in a long while since joining this community. More like my second post actually. To challenge myself, I've decided to make posts on a daily basis. Not just on this community but others as well. And I've chosen to do this by talking and writing about the things I love besides writing. One of which is watching movies.

This is a favorite pastime of mine. I can literally watch movies on anything; phones, laptops or the big screen. Sometimes I watch to kill boredom, other times I watch to get creative ideas as a fiction writer. And sometimes, I can't help but make reviews on some of these movies. So, two days ago, I saw the Nollywood movie The Therapist. I have to admit, being a fan of action movies, this was not my kind of movie at all. I was convinced to see it by a good friend of mine. And I have to say, like some other notable works, I really liked the movie.

While I may not be a grand judge of movies, this one really stood out for me. It has a typical Nollywood plot; romance, betrayal and even more romance. 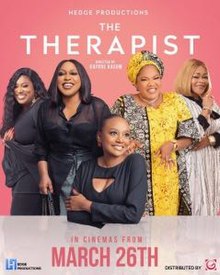 It tells the story of love and of women empowerment, especially women in unhappy marriages.

The main protagonist is Eloho Odafe, a housewife in an unhappy marriage to a husband who is abusive. She eventually gets a divorce but ends up penniless. So with the support of her friends Gari and Dumebi, she sets up an agency that would look out for women in marriages like hers. But all goes wrong when Eloho is made an offer she can't refuse and she ends up falling in love with a man with traits of her ex-husband.

The movie starts off sad, but as Eloho triumphs and makes something meaningful with her life, we the viewers feel the triumph seep out the screen. Just as we feel the tension when everything goes really bad.

I really enjoyed the chemistry between the actors, both as per friendships and romance. It spoke of professionalism at it's highest. And I was impressed.

Unfortunately, there was this annoying factor of predictability in the movie. In some cases, you could clearly see the next thing that would happen in the following scene. I guess that's because it's romance. And romance on it's own is pretty predictable.

Other than that, the movie sure was interesting, with lots of funny moments and sizzling romantic scenes.

As at the writing of this post, the movie is still in the cinemas. But no matter, you can see the movie whenever you choose and however you feel. And I can assure you of this, you won't regret.

I'll recommend this movie for you if you're into love, romance and comedy.

So what do you think? Is there another like this you want to recommend? Let me know your thoughts in the comments below.

On my next post, I'll be writing about my best Nollywood movie so far. It has the suspense, the magic, the action and all the seriousness. Can you guess?

P.S: Photo's not sourced were screenshot on my phone.

@bruno-kema! This post has been manually curated by the $PIZZA Token team!