Walking underneath the River Thames in London

Yes, that's correct, you hear me right. Today we're going to walk underneath the River Thames in London!! The Greenwich Foot Tunnel connects Greenwich on the south side of the River Thames to Isle of Dogs on the north side. It was built in 1902 for workers living on the south to get to work at the docks on the north. Today it is still used by workers, but many of these workers now are middle class professionals living in the desirable south east London boroughs and working in Canary Wharf. What a change a whole century has made to the demographics of this major city. THE SOUTH SIDE OF THE RIVER THAMES

The entrance to the Greenwich Foot Tunnel is next to the Cutty Sark, the last surviving clipper, built in 1869. That itself, is worth visiting particularly if you are interested in maritime history. The building with a green dome is where the walk underneath the River Thames starts. Before we head over, lets take a look at what it's like on the south side of the river. There's a lot of open space around here, I actually came here twice when I was in London recently. The first time in the early evening to watch the sunset. I posted about it here. The second time was to walk underneath the River Thames. On both occasions, the area was fairly busy despite Covid, but not crowded, which was good. I know normally at this time in the year, Greenwich is a magnet for tourists from both overseas and local. It's only a short distance away from central London, and many come here to visit the Royal Observatory and the Greenwich Mean Time. That's the timeline for which all countries base their time on ie GMT +/- . There is an actual line on the ground where you can take photos! Anyway, I've digressed as I will talk about the GMT in another post. Let's head over to the north side of the Thames now. Ok the tunnel looks a bit worn out, sorry to disappoint you. This is a functional tunnel, used by 1.2m people every year so there's a bit of wear and tear on the fabric. However, great British engineer means this over century year old tunnel is perfectly safe. It's built of cast iron, and after it was damaged by bombing in the second world war, thick steel and concrete lining was added to reinforce the tunnel. The entire tunnel is 1215 feet / 370 meters long and took me around 8 minutes to walk across (I've fast forward that to 1 minute in my video below). It's built 50 feet / 15 meters deep and is very cool inside, that was perfect for my visit as it was one of the hottest day in summer that day. There are elevators on both ends which weren't working when I was there. Apparently because the elevators are so deep under water, their precision on opening and closing the doors have to be very accurate, hence are always under maintaince. Seems like people's livelihood have improved during the century, but British engineer have taken a step back!

THE NORTH SIDE OF THE RIVER THAMES

The entrance on the other side of the Thames is located at Island Gardens, at Isle of Dogs. This used to be one of the dock areas, and is around 2 miles away from Canary Wharf. It's a bit of distance away for the commuters, that's why most of them will cycle. In my video, you'll see some of them in the tunnel, and you can imagine how much they'd appreciate the cool temperature in the tunnel when they have to heave their bike up and down the 100 steps when the elevators aren't working. Plenty of exercise!!! I have made a short video of the Greenwich Foot Tunnel, walking underneath the River Thames. I hope you will enjoy it.

Wow that's really cool place. Infrastructure changed a lot during the decade and now slowly it might be possible to build a home down the water and live there hehe.
It's really a beautiful video. Saw something which I haven't seen till now. Thanks

That's true, there are aquariums and restaurants underwater now, though I'm not sure I'd like to live underwater, might be a bit claustrophobic.

Haha . Thanks for posting

Always bringing a great adventure with a very good photo review. An impeccable work, attractive and different to be under the river is seen as a great experience.
He hoped to be a dolphin soon to award this quality publication. While I leave you a heartfelt comment appreciating this spectacular post.

Thank for dropping by @rafaelgreen!

Was that isambard kingdom brunel that built that? I never remember anyone's names who did anything, but he's got the coolest name in the world.

Was London fairly chilled? I know you were worried about going there.

No, neither the Cutty Sark nor the tunnel was his works, though he does have a farily large footprint in Bristol of course!

The furthest central I wandered around was Borough Market by London Bridge and that was a lot quieter than normal, quite sad really. Didn't go any further in, apart from on the tube which is also fairly quiet. Even when it went through the West end stations, there was only a handful of people who got on and off. Most of the time everyone was sitting well spaced out.

The tunnel looks a bit scary as it needs some work, repainting would be a good idea. I love the angle you took the photo from. I'm always doing that myself, it's nice to see the end of the tunnel from there, so small. I hope I can visit one day.

The interior is all tiles, probably keeping to the original deco and I think may contribute to the coolness, just guessing. Perhaps a good scrub down every now and then would be nice though. The whole Greenwich area is very nice and only a few stations away from Central London, definitely worth the trip if you ever come over. Hope you do!

My cousin visiting Greenwich years ago and she told me it's nice.

Thanks for sharing your pictures and story about the tunnel 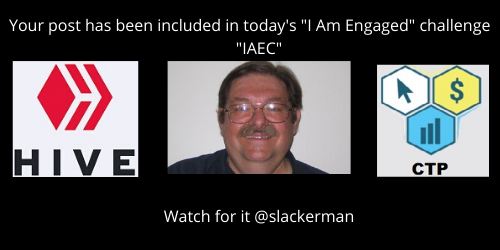 I never knew such a thing existed there. I must admit it looks a little creepy inside, but cool way to solve a problem. I assume they considered a bridge, but deemed it too expensive, too long or too impractical.

Good point, not sure why they did a tunnel a century ago, there are many bridges across the Thames. Probably because British engineering was top notch in those days and they wanted to do something different 😀

OK, so the next one has to be you grabbing a Jet-Ski and doing a James Bond over the top of the Thames!

I'll do a live on Hive when that happens!

You know I had no idea there was a tunnel under the Thames at Greenwich, no idea at all!

Despite having grown up in the South East and visited London numerous times!

I guess you either have to be a tourist or a local living nearby to know! Check it out next time you're around, its quite an experience!

Hiya, @ItchyfeetDonica here, just swinging by to let you know that this post made it into our Honorable Mentions in Daily Travel Digest #945.

I can definitely see how exhausting the 8 minute walk to get across the tunnel must have been haha. It does look old but still sturdy.

You see, I have been meaning to migrate to UK for some time now. Currently processing papers for it. I have relatives living near Kingston-upon-Thames, Surrey. Would you say that this place is quite near from there? I would love to see it for myself someday when I finally get to UK.

oh my god! I used to live fifteen minutes away from Kingston, its a lovely place. Kingston is around half an hour to central London, so yes, it's pretty close.

Here's a few of my old posts about Kingston, if you're interested.
https://livinguktaiwan.com/a-tour-around-kingston-upon-thames/

I see you're a nurse, is that what you plan to do in England? My tenants a few years ago were 4 nurses from the Philippines working at East Surrey Hospital. We always short of nurses, so you should have no problem getting a job here.

Yes yes I am planning to migrate to UK and work there as a nurse. I’m really looking forward to it.

Thats’s great to hear! Perhaps if fate allows it, we could bump into each other someday lol. I will make sure to read your post. I have been itching to know what the place looks and feels like.

Anyways, tenants? You have units for rent near Kingston?

Not Kingston, at a place called Redhill, near East Surrey Hospital which is quite big. My current tenant is a nurse from India and her family.

Hope you get here very soon, and hats off to you and all medics protecting us during these difficult times 🎖️

I see. I looked it up and it's much farther from Kingston but still within Central London. If I ever need to move out of my supposed apartment, I will give you a heads up lol.

And thanks so much for the appreciation. These are trying times for my profession.

Beautiful photos and I really love how this old tunnel looks! More than a 100 years old? British people sure know how to build!

I also just checked out you @pinmapple map. You've been to so many places around the globe, that's awesome! Keep sharing awesome travel content @livinguktaiwan