One Piece Chapter 1012: ITCH Review, and Why One Piece is the King of Mangas

@ange.nkuru 65
4 months ago
The Anime Realm

There is something to be said about a shonen/show that will you take you away from a fight you've waited for for more than 5 years and not only there is still as much tension in the story overall, but you don't mind, not one bit. Matter of fact this is one of those chapters that remind me why I love One Piece so much and why it's the best selling manga of all time, right at the hills of Batman in the comics World.

The chapter was hilarious, action packed while setting up even more fights that we'll be seeing in the near future, and somehow still managed to capture the epicness of roof piece. 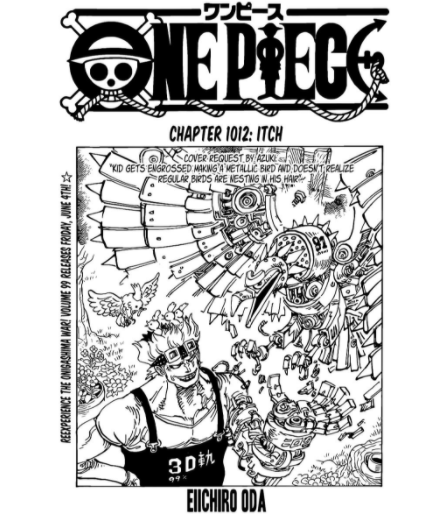 Now I won't talk about the whole chapter, just the moments that stuck out the most, since even as I was drafting this post I'd already realized it would become too long. Heck, trying to go in details about the implications of Momo and Yamato's scenes could be a whole other post.

First thing first, the Scabbards. So It's only now that Nekomomushi learns that Pedro is dead, and that the man responsible for his death, AKA Perospero(Pero for future reference.) is in Wano. As you'd expect, as soon he gets this news he scrams, searching for Pero to get revenge for his former crewmate and pupil. 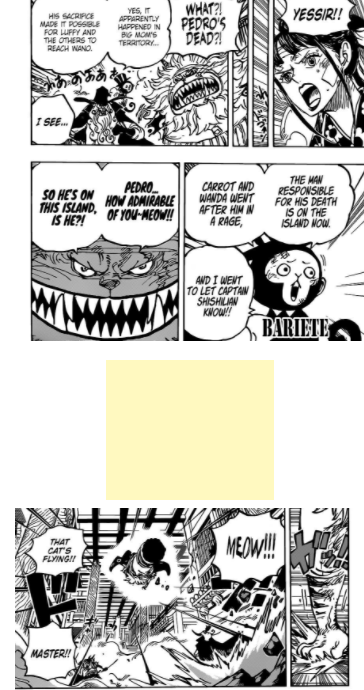 Yes, sure it's to be expected but I also find it funny because as the audience we know Pero is catching strays for no good reason. Dude was just doing his job. Pedro invaded/infiltrated Big Mom's territory and as her son/soldier, Perospero had to stop him. Unfortunately Perospero was too strong for Pedro and to save the mission, Pedro blew himself up, hoping to take Perospero with him but only managing to take an arm. Perospero did nothing wrong.

Even just some chapters ago Wanda and Carrot also attacked Pero under the same misguided goal of revenge. He explained how it all happened, then with his asshol*sh charm told them they shouldn't step into an emperor's territory without expecting fatalities, and that they should go eat grass. They didn't care and attacked him anyway. He crushed them yet left them alive, once again alluding that the Big Mom pirates may not be as cruel and heartless as the World believes them to be, and that maybe it depends on their foes and the circumstances.

It would be hilarious if Pero also beat Neko and left him alive. I'm still team Neko but for the lolz, it might be worth it.

Yes, fast forward to Sanji nursing Zoro. I love that conversation. It's not often we see those two interacting without dissing each other, not that it lasted. But what trips me out the most is how it was executed, as it reinforces the notion that Oda keeps tabs on what the fandom is up to and saying in order to break our ankles when we least expect it.

The perfect example is this, the Sanji vs Zoro rivalry/beef. This beef started practically as soon as they met. Why exactly? I don't remember, but I can safely assure you it was for a petty reason.

Anywho, the rivalry started then and they have been at each other's throats ever since. Like husband and wife, they're always bickering, sometimes even getting physical though never to a lethal extent. Nevertheless, anyone not too biased towards one of them could always see they both hold massive respect towards each other, are quite the deadly duo when they actually team up, and one could even argue that deep down, they know they're each other's best friend.

However, overtime that rivalry poured into the real World and now Zoro fans and Sanji fans are always beefing, not letting the other fandom hear the end of it when their character is pulling off more feats over the other one. Rinse, repeat.

And since Zoro had been going ham on roof piece recntly, Sanji stans had been fuming(Pun intended.) specially since the last great feat he'd had was baking a cake and ZKKc(Zoro Kills Kaido Community.) kept dishing out memes about Zoro carrying the whole crew and arc on his back while Sanji is MIA.

But of course being the troll that he is, Oda just turned the tables and now Zoro is literally Sanji's cross to bear.🤣🤣 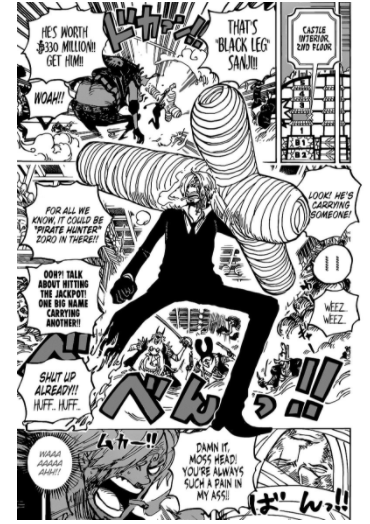 You gotta love it!

It hasn't even been 3 days since the chapter dropped and Sanji stans are already on the offensive, Zoro's are making their frustration known, and I've even seen some comments claiming that it only happened because Oda succumbed to Sanji stans toxicity. 🤣 Man I can't wait for Sanji to take out a commander or 2, ZKK gang is about to have a rough time!

Personally I prefer Zoro but I also love Sanji, so much so that even though I'd been loving Zoro's Ws during roof piece, I was still itching to see Sanji start getting his shine on. Seems we're off to a good start. But Goda, please no more nose bleeds this arc.

This section is just flames! It start with Big Mom(BM) staring down the now knocked out Page 1. Furious that BM took out her brother, Ulti fearlessly charges at the powerhouse that is BM and then, hilarity ensues: 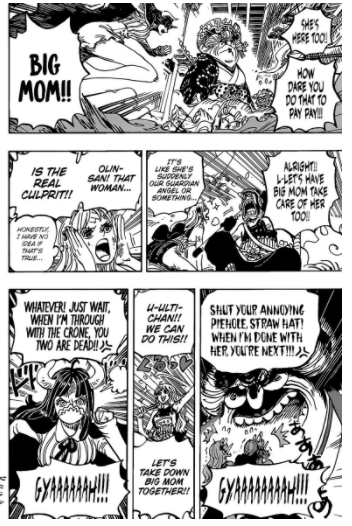 Ulti really is as ruthless as she is fearless. As soon as Nami & co try to make their escape, she blitzes towards them paying no mind to the emperor and; 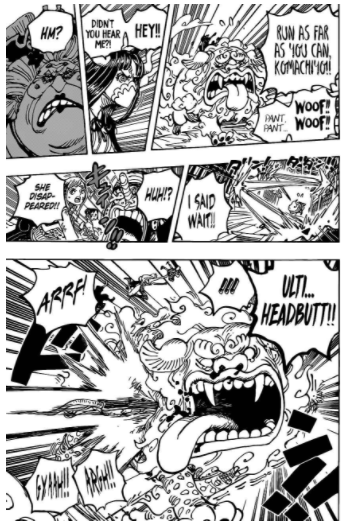 Ulti is a freakin badass!

A bit too ruthless if you ask me. Even as Doggo is down she keeps mercilessly kicking him and then proceeds to b*tch slap Otama with her claws, the latter who was just trying to rescue her pet. Ulti done messed up now, having just incurred the wrath of both Nami and Big Mom; 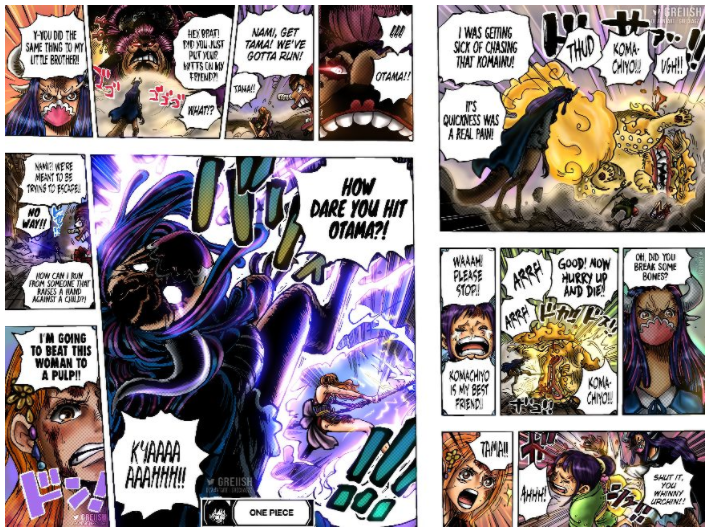 Personally, aside from plot devices I don't think Nami stands a chance alone, but it's nice to see the spirit. Maybe she tag teams with Usopp, because although they're both weak cowards, they always come through when it counts and they work well together.

So when I read that last panel a tear formed but didn't drop, only to drop a few seconds later. Why you ask?

Well, let's go on a flashback to friday when I read the panel and got a flashback of the first time I watched Nami's flashback, with as little spoilers as possible.

But first, let me preface by saying that I hated her character in the beginning. No, I loathed her. She was very greedy and constantly swindling my man Luffy. But then her first character arc concluded, and boy did it hit. That was actually the very first time I ever balled my eyes out because of a show(anime or not.) and it's also the arc that got me hooked to the story.

So Nami is an orphan, who's adopted mother(Bellamere, AKA the Goat.) died while protecting her and her sister. Nami was 8 at the time. Since then she has assumed her mother's mantle, helping helpless children no matter the obstacle and at any cost. That's almost every protagonist, fair. But only Oda could make your mind go back to this immediately(Do not watch!) after reading that panel.