The proof of capacity

@abundanceheart 48
5 months ago
Proof of Brain 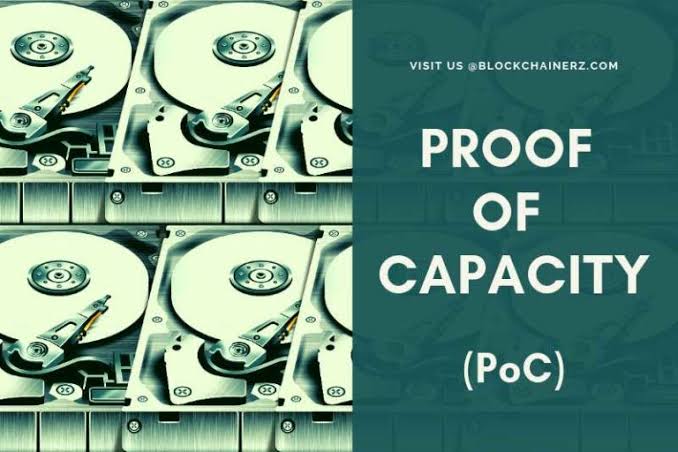 Proof of Work(PoS) and Proof of Stake (PoS) are the most established protocols when it comes to cryptocurrency mining. But there is a third one that alot of people might have not being paying attention to, which is Proof of Capacity, it is used to checkmate how the established mining protocols work. Well its really no ones fault for not knowing about it because it is very new to the mining algorithm and is used by a cryptocurrency called Brustcoin. There are so many who thinks PoC is just a viable alternative to the current mining methods. But before i go in to what PoC is, why its a great solution and other technicalities of it, i would like to talk about PoW and PoS.

Proof of Work.
From my own understanding, PoW basically requires that a miner uses a computer resources to solve a complicated mathematical hash function known as the "Work". These hash functions are known to have only one way solution and requires computing power to be able to find the exact function to input that will get the right function output. This function variable that is been inputted is known as nonce. Miners continually use this variable to iterate until they are able to get the right hash. However, this requires a great deal of energy for the resources to be solved.

Proof of Stake.
Proof of Stake mining has to do with the miner holding a particular " Stake" for a coin to be able to part take in a transaction verifcation. The trader is in control of his coin making the concept of PoS very different from PoW. Dues to the problems of PoW, PoS was invented to solve the problems with PoW.

Reasons for an Alternative.
Even though the PoW algorithm worked well when Bitcoin was relatively a nascent technology, the improvement of the network was not relative because the Bitcoin was build in such a way that to increase mining difficulty, the block times is kept constant. This lead to the conclusion that only Application Specific Integrated Circuits (ASICs) can be used to mine this coin because of the complicated result being the mining difficulty. Now when these miners are unable to solve the hash function on time, the energy becomes a waste and is seen as bad for the environment.

On the other hand, PoS mining was less energy intensive because there were other external problems that crypto advocates have. When a coin is been staked, those with the most coin have more say in the mining process making the smaller miners have less impact on important decisions. This is known as the notion of centralisation in the mining process.

Hence, with those problems explained above. Miners found the need to adapt an alternative mining algorithm that is less energy intensive and enables decentralisation of the network. This new alternative is known as Proof-of-Capacity.

What is Proof of Capacity?
Proof-of-Capacity is type of consensus algorithn that enables a miner to "plot" his hard drives so that he can take part in a transaction verification. This means that the miner has to first compute and store the solution of the mining problems before starting the mining process. Now when this process is going on, some results will be gotten faster while some will be chosen in the consensus round. Once thats done, the miner is awarded the block and also the coins attached to that. For example, the block time for Bitcoin when applying other hashing algorithm is 10mins unlike using the PoC which takes as short as 4mins for 1 block.

Moreso, Miners get the chance of increasing their rewards on the block if they have the most solution saved on their hard drives ahead of time, this will help increase the chances of faster solution.

How Does Proof of Capacity Work?
Proof-of-Capacity works with two components which are Plotting and the mining of hard drive. The first stage is the plotting, here it uses a hashing function called Shabal. Its enables the miner create very unique files. Dues to the fact that the hashing algorithm is harder to compute, this SHA 256 variant is used. Miners have to compute and store the solutions of this Shabal algorithm ahead of time on the hard drive.

Plotting the Hard Drive.
This process is done by plotting a hard drive or creating a plot file and when this is done, the miner is producing nonces. This nonce is quite different from that that of Bitcoin because it is generated from the plot file. The miner has to keep hashing his data until he solves the nonce.

For example if a nonce contains 8,192 hashes and they are bundled together in to a number of pairs called SCOOPs. Each pair will now have 4,095 scoops which will be assigned a unique number. Below is an image example of what a scoop and nonce looks like.

Mining on the Hard Drive.
Mining the hard drive is when the result is calculated and one of the result will be the scoop number (That number will be between 0 and 4,095). Once this number is gotten, it is used with the corresponding nonce to calculate the unit of time known as the "deadline". This action will be carried out for all nonce that is on the hard drive which will enable the minet chose the shortest deadline. The shortest deadline will the time difference between the last block and the new one. So if this deadline is shorter than that of other miners, then it is allowed to create a new block and get all the reward that comes with it.

Advantages of Proof Of Capacity.
Having seen the problems face with other regular mining algorithms such as PoW and PoS, Proof of Capacity has proven to have some number of advantages and they are as follows:

Proof of Capacity is decentralised because every miner has their own hard drive.

Because of the high degree of diversification, there is a low barrier to entry when obtaining a hard drive, they normally cheap and allows new miners to join the fray.

after using the hard drive, it can be cleared and used again unlike the ASIC that can not be cleared at this point.

there is also opportunity of getting new hard drives because an older on does not gauranttee having an edge in mining a coin.

Disadvantages of Proof of Capacity.
This mining algorithm can exposed to hackers, that is, if it becomes very popular, no one can know if the hard drive is used for a legal purpose.
This hard drive contains only the plotted data that is used for mining of the coins. This means that the hard drive will still have more than enough space that is not used.
Due to the lower barriers, people tend to buy larger hard drives. So when people get this larger hard drives, they use it to mine most of the coins causing an impact on the decentralised network