Hello famz, it has been really long i made a splinterlands post and that is due to the error that happened last week , my post being missed and when i finally got the vote it disqualify me for the new week vote so i had to just forget the whole vote for the week and start afresh this week...

Big thanks to the splinterlands founder and their amazing curators for their amazing support and dedication in helping players and investors grow on their game, it is really a great feat they achieved..

This week battle challenge is about a monster i really love using in battles due to her ferociousness, she can be very brutal in battle and she is also a threat to melee monsters, it is none other than naga warrior a savage and brutal monster... 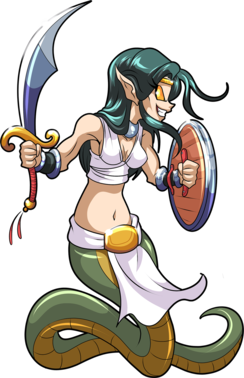 The Naga of ΛZMΛRÉ are a brutal and savage people. Many of their ways are perceived as taboo, revolting, and disturbing to outsiders, such as their custom of eating the dead. The Naga Warriors (especially the females) are known for fighting to the absolute, bitter, bloody end.

A bloody battle is any battle that involve the naga warrior, her enrage and retaliate ability makes her very brutal and she rarely miss her opponent to her high speec...I was paired into battle with one of the formidable player on splinterlands known as adelka in a battle to the last man standing with the heavy hitlers rules where all monsters have the knock out ability...

In such a rule as this, player need to make use of a monster with stun ability so the other monsters can be able to use the knock out ability so i decided to go with the water splinter.. The naga warrior is a very strong capable of taking the front battles and i used the kelp initiate as the second position due to its high speed and long life, it would be able to withstand the blast monsters and snipe hit for long due to his triage ability too...

The crustacean serve as the healer in the battle and will help to replenish naga warrior life while the medusa is the key man of the battle as her stun ability can make the match very easy to win for the team..

The ruler of the seas is another main monster in the battle, he has many unique ability that can weaken the opponent and boost his own team mate, his blast ability helps in taking down the second monster the opponent used and the mermaid is another triage i used to replenish the life of the monsters at the back incase of blood shortage

The battle was a victory!

very nice post about the naga warrior my friend Burl! Keep it going.

The post formatting looks cool.
Well done on the battlefield as well.
Keep on battling.