Practice What We Preach

cmplxty in Natural Medicine • 4 months ago

I had my first acupuncture visit this week! It was remarkable and I'm glad to finally have it done, considering how much I am into the NM stuff! 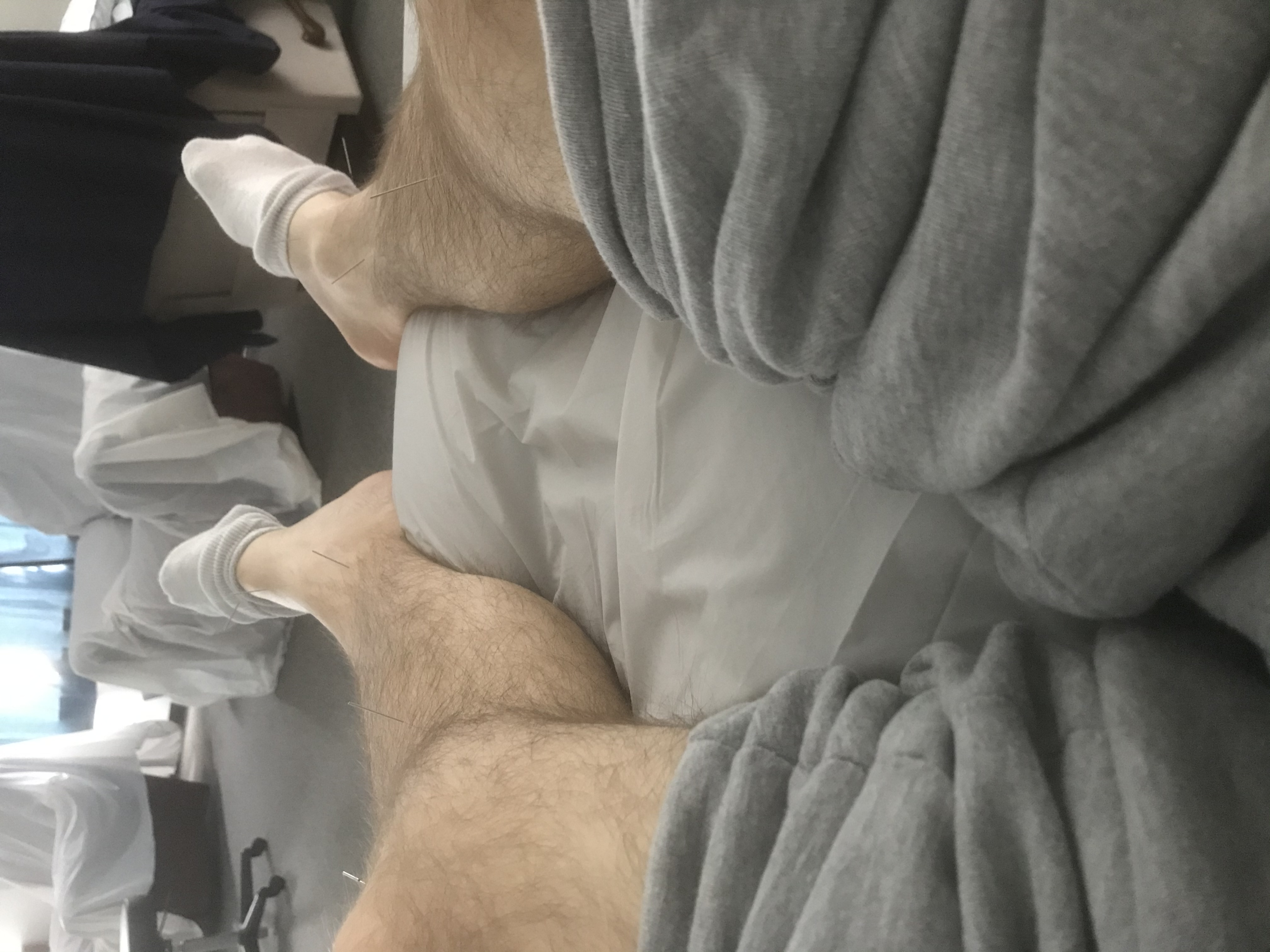 Having the confidence and ability to test out different things to see what works and what doesn't is something that I think many don't have until they are in dire straits. Thankfully my wife and I have been in the mindset to do a lot of different things over the years when things were in pretty good situations but weren't optimal instead of when we were in awful situations and were desperate for anything to help.

My wife has been one to go to acupuncture for many years now, even before we were dating. She's had wonderful success to it, it really did a lot to help fix her back issues from a car accident many years ago when she was a teenager. The relief she got from just that led her down the first part of the path of what we do on a daily and weekly basis to stay well without a lot of the poisonous things that get prescribed to people.

I recently had some stuff that led me to seek alternative treatments! I knew that I would eventually use acupuncture but since it wasn't something I wanted to spend the money on for a little pain here and there, I figured I would wait until I had a few reasons to go lol. Got that recently! More details on that will come later, the larger scenario but before that longer post I wanted to share how wonderful my acupuncture experience was!

With my wife going, I had a bit of an idea of what to expect but it wasn't until you're sitting in the chair with the needles poking out of you do you understand how incredible it is, the electrical signals across our bodies and how things are connected! I am glad I was a bit prepared for it because once I got the needles in there, moving a bit was a little jarring to say the least lol I later found out that moving my legs or hands is dangerous while you have the needles in there because of the pressure points they are targeting. Whoops!

My most noticeable improvement and change I had was in my knee pain. I ran a half marathon several years ago and since then I know that I have issues with the pad (name is escaping me... trying not to just internet search everything I can't remember, trying to exercise the ol' noggin!) between the knee joint. It bothers me here and there when I do things, and I haven't been able to run consistently since the race. Ah well, nothing I can't live with for now. I'm glad that I got the acupuncture treatment though! Since it was done, going for walks with the little man have been so much easier! It's only been a full day but I noticed immediate improvement after the first treatment, hopefully I can continue that progress.

The placement of some of the needles were surprising to me based on my symptoms and things I was talking to him about. I know that when we move and go to another location later on this year or next year, we are definitely interested to see if one of us, probably my wife, can take classes to do this type of stuff for work! It would be amazing to get better at it considering the success we've had and pass that passion and knowledge onto others in a clinic. Where we live isn't the worst place but a lot of people here in the northeast are firmly in the grip of the pharma and healthcare system and don't often look for alternatives. Taking steps like this can be hectic for some and it's certainly taken me a while to get to it but like I said, I wanted to make sure I had a few things to need in order to seek the treatment. Now that I've had the treatment though, I know that I will definitely be coming back for some other things that are nagging me a bit. While you're on the chair, might as well explore if the treatment could help you, right? Sounds good to me!

The other benefit to it for me is that I can now advocate for it. If someone tells you about something that they think works but only by seeing what it does to help others, it doesn't have as much of an effect as if you tell someone you yourself have done it. My dad has been hearing us for years about how amazing acupuncture is for a minimally invasive, non-surgical option that can treat all kinds of stuff but he was always saying "yeah, ok maybe" and that could be because I myself wasn't doing it. Well not any longer! I will definitely tell him of the success I've had here so that hopefully he gets onto one of the tables for the many ailments that years of hard work have given him.

Do you want to get paid, in crypto, for searching the internet? Try using and signing up for Presearch to earn some great crypto! I've currently got 2,265 PRE tokens, with a market value of $257.13. It doesn't sound like a lot but when you search using sites like Google you get paid $0! Join Presearch to break Google's stranglehold on the internet searches. If you'd like to sign up, use my referral link!
https://www.presearch.org/signup?rid=513043

Them legs though! And the ladies swoon.

Do you remember this post I did back in June last year about the dry-needling I got? Sort of hurt a few times, not as much as one would expect considering those needles are pretty deep into the muscle...A few tickled more than a bit though. I'm not much into the NM thing as I watched my mum go down that path and waste away to nothing with cancer until she passed away in great pain and anguish...But I have to say, these needles seemed to help relax the muscles around my frozen shoulder issue. 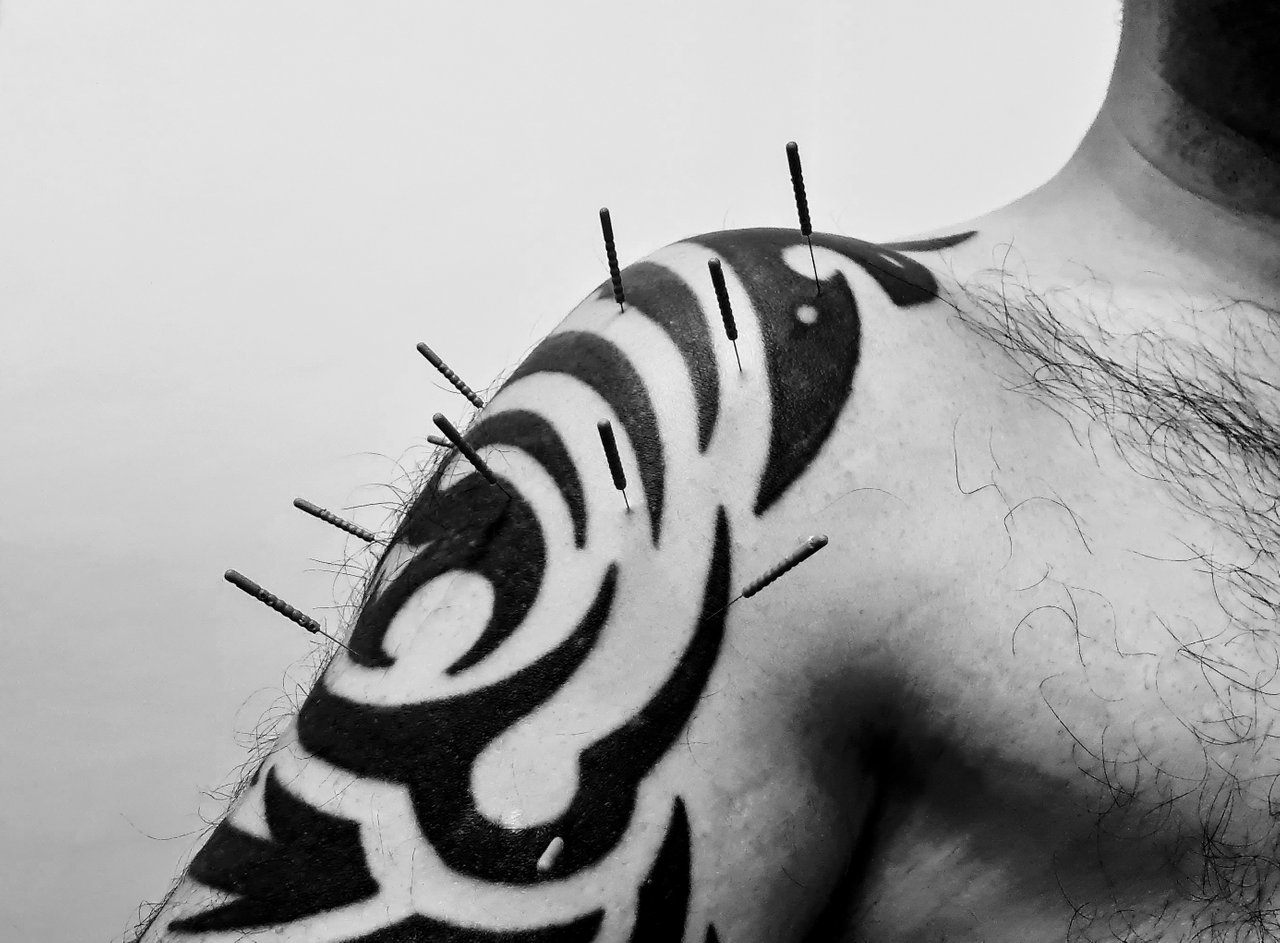 Nice tribal tat lol I’ve always wanted to get one but never pulled the trigger.

I think it’s definitely got it’s place for getting relief. It might not work for everything and it also depends on the skill of the person doing it but I think for these things like shoulder issues, knee issues and others it can really help.

Sorry about the suffering for your mum with the alternatives she tried. That definitely leaves an impression so I don’t blame you for being hesitant.

Thanks mate, it's a pretty big tattoo, nine hours in all...Yeah it hurt! Lol..

I'm not against NM or alternative medicine, it certainly has its place, but so does traditional medicine I think. It's a very personal choice though and people. Goose one or the other, or both, based on what they know and believe, as it should be. My mum did and that was here choice. I respected it.

Acupuncture has always seemed to work for me and the dry needling certainly did so I'd have to I'd do it again if I had to.

How old were you when you got that tatoo?

I was 30, the year 2000, when I got this one. Old enough to know better, and old enough to know I wanted to get it. I guess these days the neo-tribal style isn't that cool but neither am I so it's all good.

Cool...In an old-guy way huh? It's ok, I don't really set out to be cool I guess, I just be me and those that see it clearly will respond. :)

I always assumed it would probably hurt like hell if one shifted around with those needles in themselves. Well, you've answered my curiousity.........yes it hurts like hell. Other than forgetting to stay still, looks like you've found something that works for you.

Hahah I did it for science! Yeah it’s definitely not something I’ll be doing, the moving stuff. It wasn’t pleasant! I’m an on the go type of person so it was tough to stay still lol. I’ll have to choose a longer pod cast next time!

I thought of going for acupuncture therapy once, years ago, but wound up running out of the joint when the lady brought knitting needles out to jab me with...!!! Do you think maybe I visited a bogus, crazy practitioner? 😟

Sounds like if you tried to get a happy ending massage only to get pegged instead. Not what was advertised! Lol Acupunture is my go-to when it comes to healing from injury and illness, I found it extremely effective, and from most of the natural healing, approaches is one of the quickest. There are clinics that use acupuncture instead of anesthetics for open-heart surgery. Acupuncture is very powerful. Thanks for sharing your story, it really makes my heart smile seeing people looking for alternatives as western approach to health is all about money and making people sicker

Yeah it’s been a remarkable therapy for my wife so I’m interested to see how well it will work for me!

I’m glad they have the confidence to do that for open heart surgery lol. That wouldn’t be me, if I had the choice but to each their own lol

Yeah true, possibly a challenging experience being fully awake during heart surgery with a bunch of doctors around you touching the insides, lol and creep :D
Keep updating both your and your wife journey with acupuncture cause can lighten up the paths of many :)

I have never tried it, but my wife also told me she got a lot of relief from acupuncture, although eventually she had to get an operation.

Good to hear your wife got some relief at least.

I've only done acupuncture once and the experience was amazing, although the therapy session included other techniques. I want to have these sessions and also massage sessions regularly at some point. Thanks for the post, man!

Yeah, it's not exactly a bad thing to not need the therapy sessions too often :) Glad you enjoyed it! They do tend to do a few other things my wife tells me, she's had that happen in previous appointments. With the whole 'Rona though, they aren't doing a lot of it I think.

Cheers, thanks for being a great NM curator and moderator!

One of my fav self healing methods. Going to get acupuncture in labor! Excited

I've heard of that, good luck! Hopefully you have some great success with it. Just be careful not to move too much lol

Wow. That's so weird... I'd like to try it out!
I never heard about this treatment before, it's really interesting.

It’s a remarkable treatment if you need to do it! It’s great for all kinds of stuff but at your age you hopefully don’t need it! It’s for us old farts hahah.