Tales of the Urban Explorer: The Remains of Sheffield Ski Village

slobberchops in Urban Exploration • 2 months ago

The weather was dark and ominous as we reached a suburb of Sheffield that once housed the ill-fated Sheffield Ski Village.

Having been warned that there was a gypsy camp nearby, I drove the old Ford Mondeo slowly up the winding lane thinking to dump it close to the top. 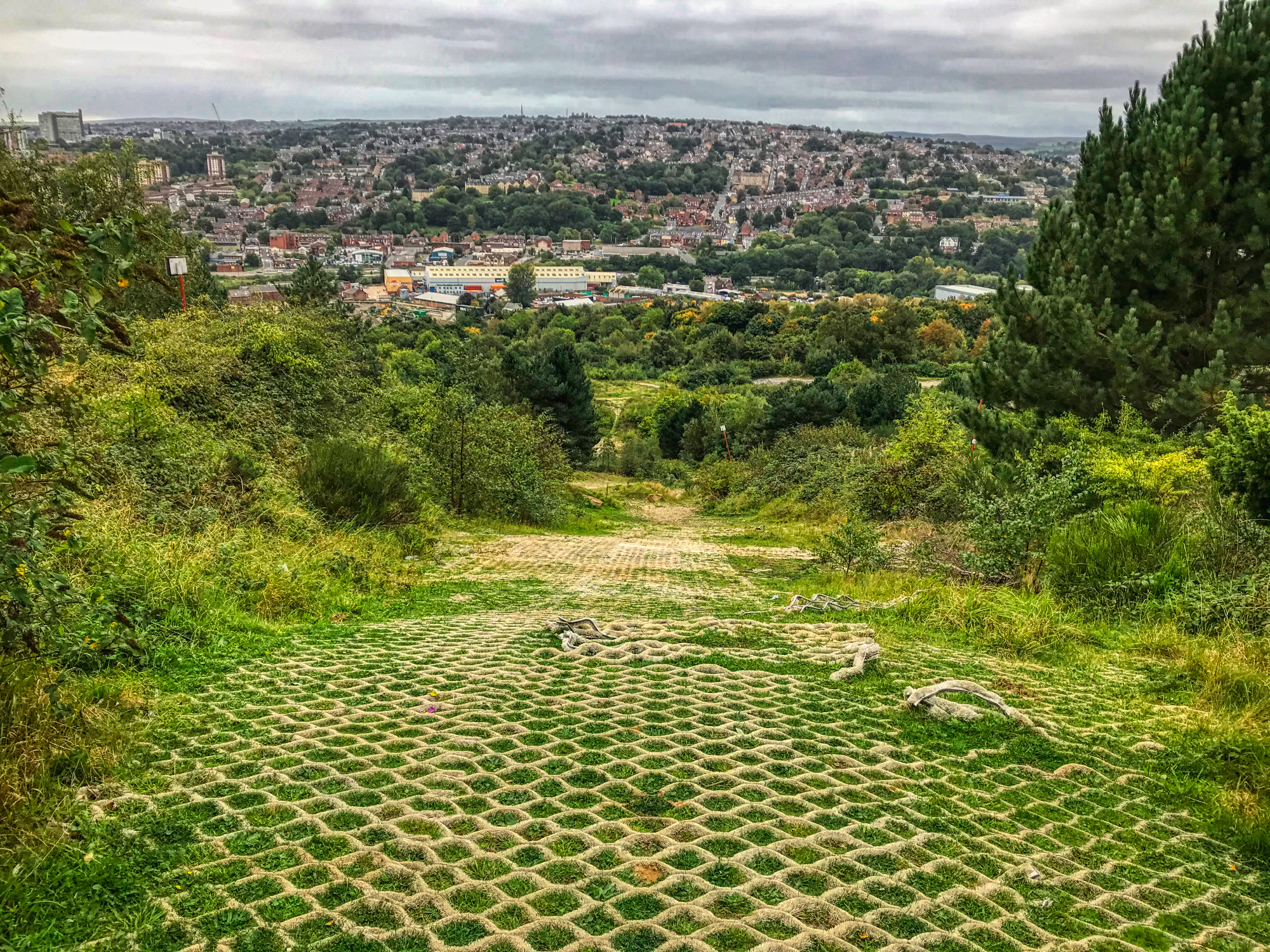 We reached our destination and saw no signs of the swarthy ruffians we expected to see. Gypsies have a bad reputation in the UK for leaving a mess when they get forced to move on by the local Police.

Heading down the hill again, we parked only to find another car parking right up my arse. Oh, what the fuck.

The car unloaded a large family who started toward the derelict entrance. Is this a bloody nature trail or an abandoned ski resort? Uncaring we followed and looked at…, was there anything to look at?

A big pile of white goods had been discarded but not even an old ski sign? It was disappointing and then I noticed the sticker.

Lost Places, Forgotten Faces is a ninja, well known within the Urban Exploration community, and not liked by some. I have met the guy and we gelled well, I won’t say anything bad about him as he has helped me out no end. 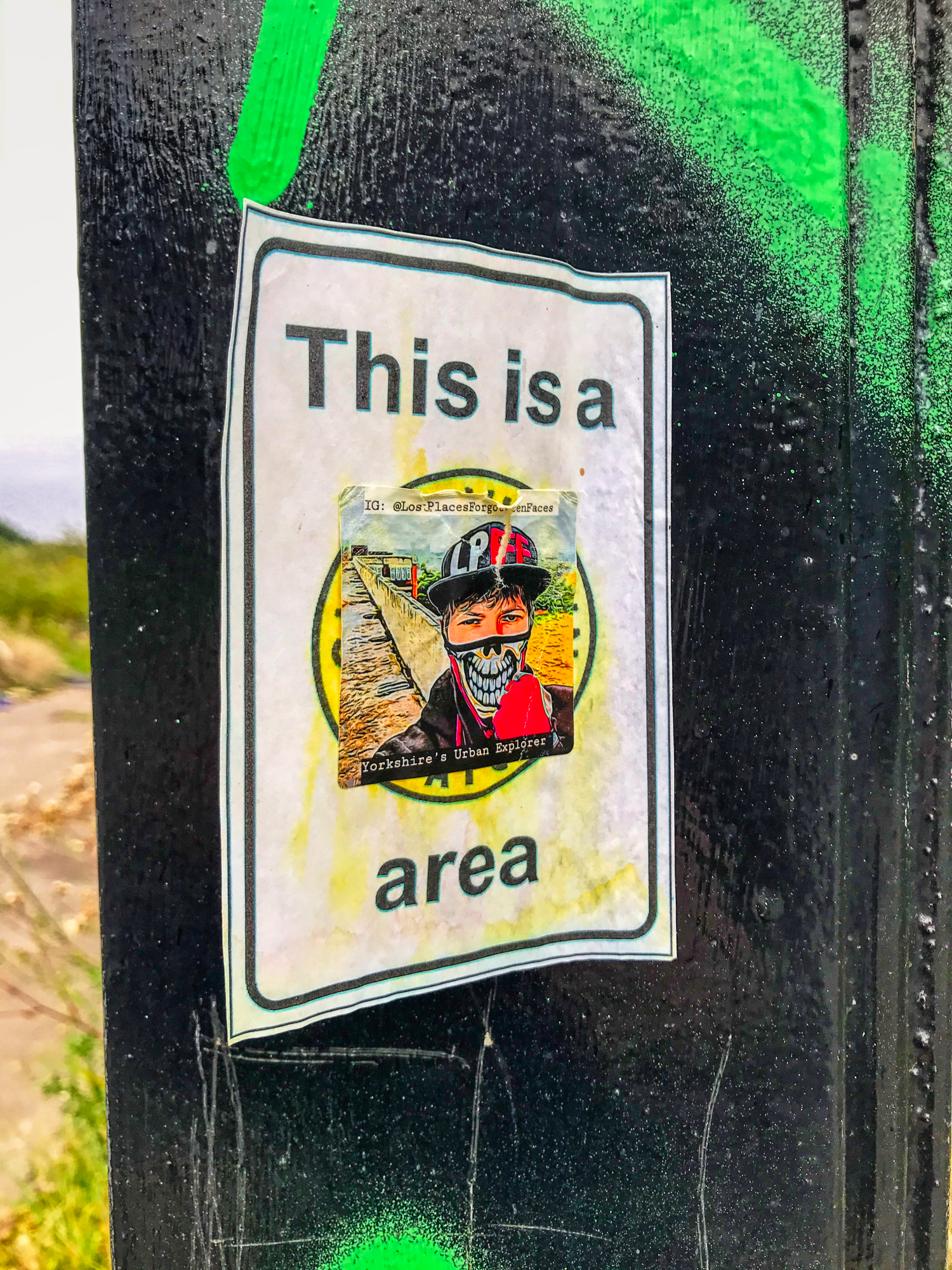 If he likes to add stickers, well that’s his choice. I will send this article to him when finished.

Closed since 2012, Sheffield Ski Village has been plagued by fires, and little is now left. …’even the discarded white goods were full of graffiti, that is typical Sheffield’…

Sheffield Ski Village was a far cry from the image depicted on Wikipedia. Besides those ski mats, we were having trouble finding anything resembling skiing. Source
…’many professional freestyle skiers, such as James Woods and Katie Summerhayes trained here once’…

It had to be done, and we started climbing that big hill. It might not look so steep but trust me it is. 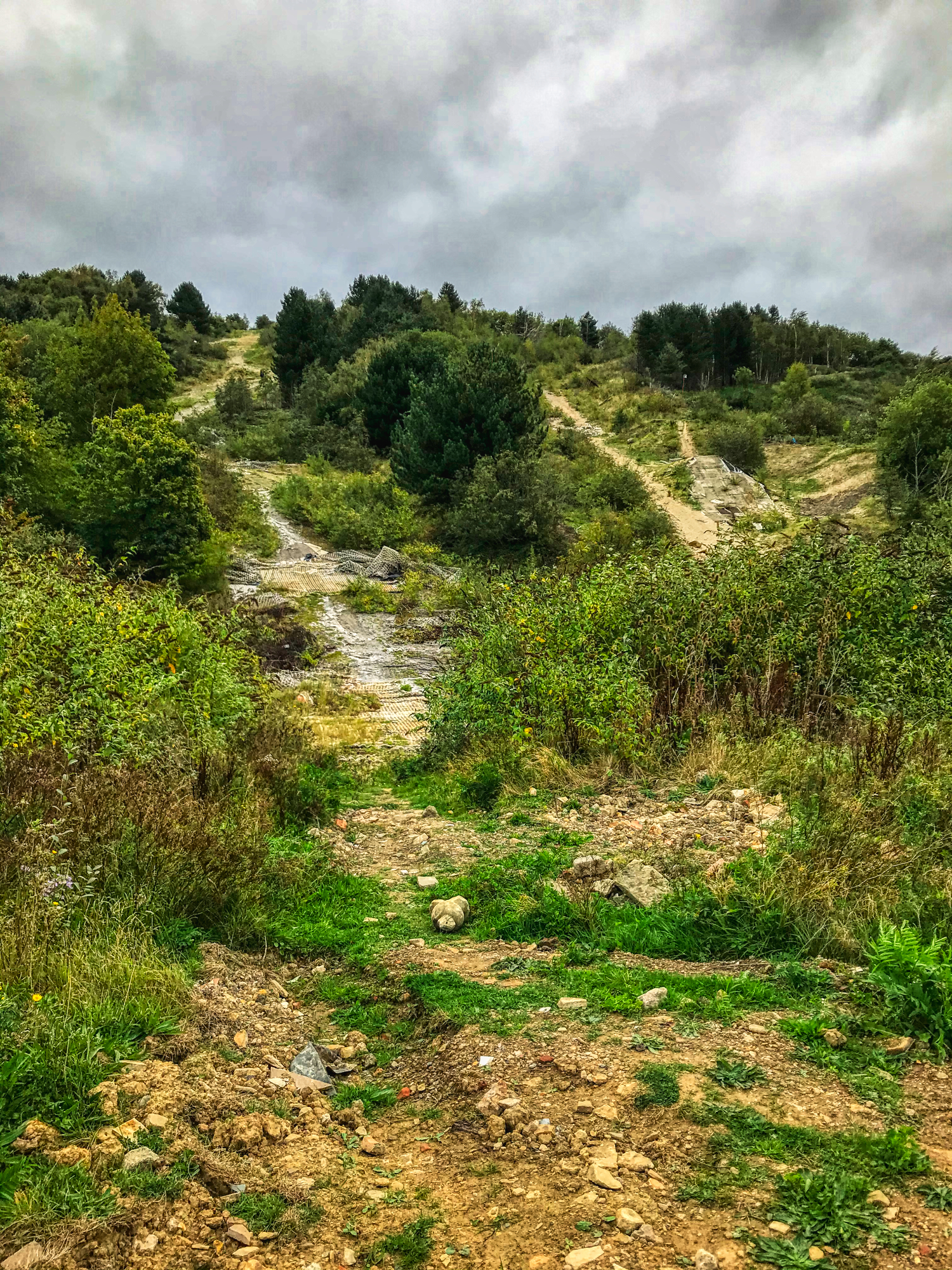 I noticed a woman clambering down the matted area, she looked to be struggling and was picking her way tentatively. Surely it's not that steep? 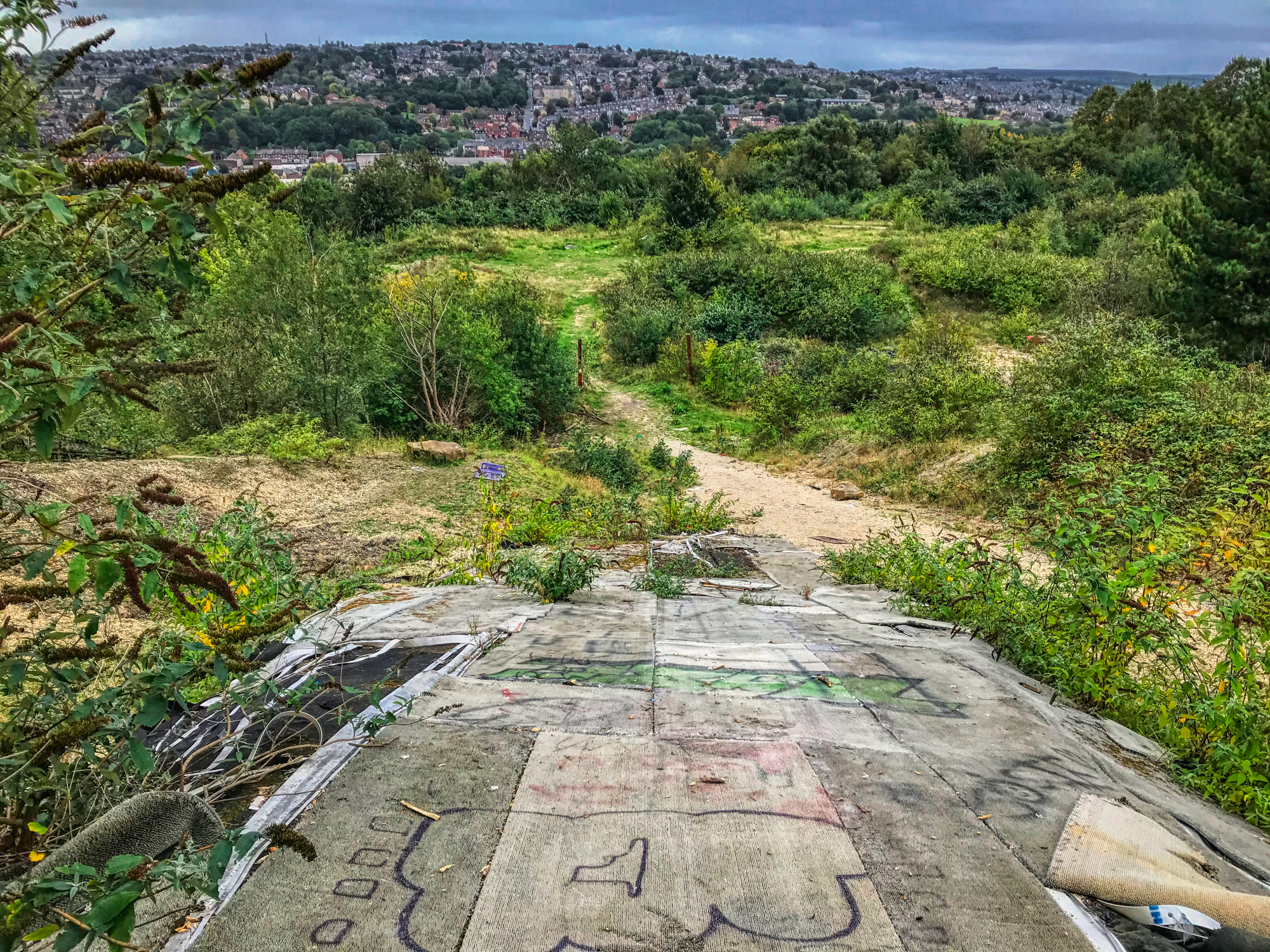 Finding a light was something. I mean something different from the masses of mangled mats on show. I was getting out of breath and the rain had started coming down, lightly but annoying enough to be bothersome.

You do benefit from some great views of Sheffield from near the top. I was expecting some kind of building after all that climbing but was rewarded with… nothing! 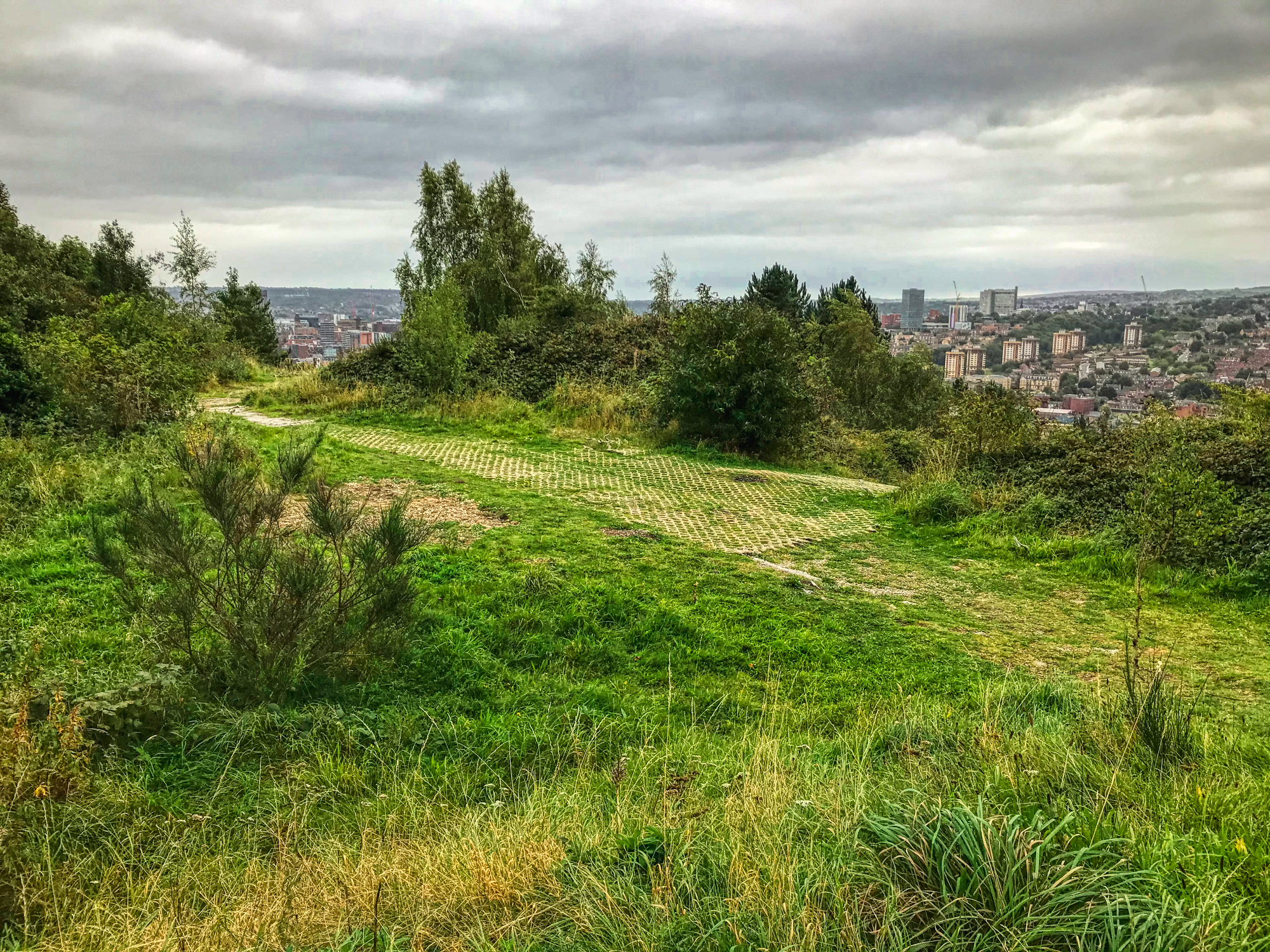 There was only one thing for it; to go back down again. I have to say, it was different if nothing else. …’@dizzydiscovery finds that ski slopes are quite steep. This could have been the black run’… 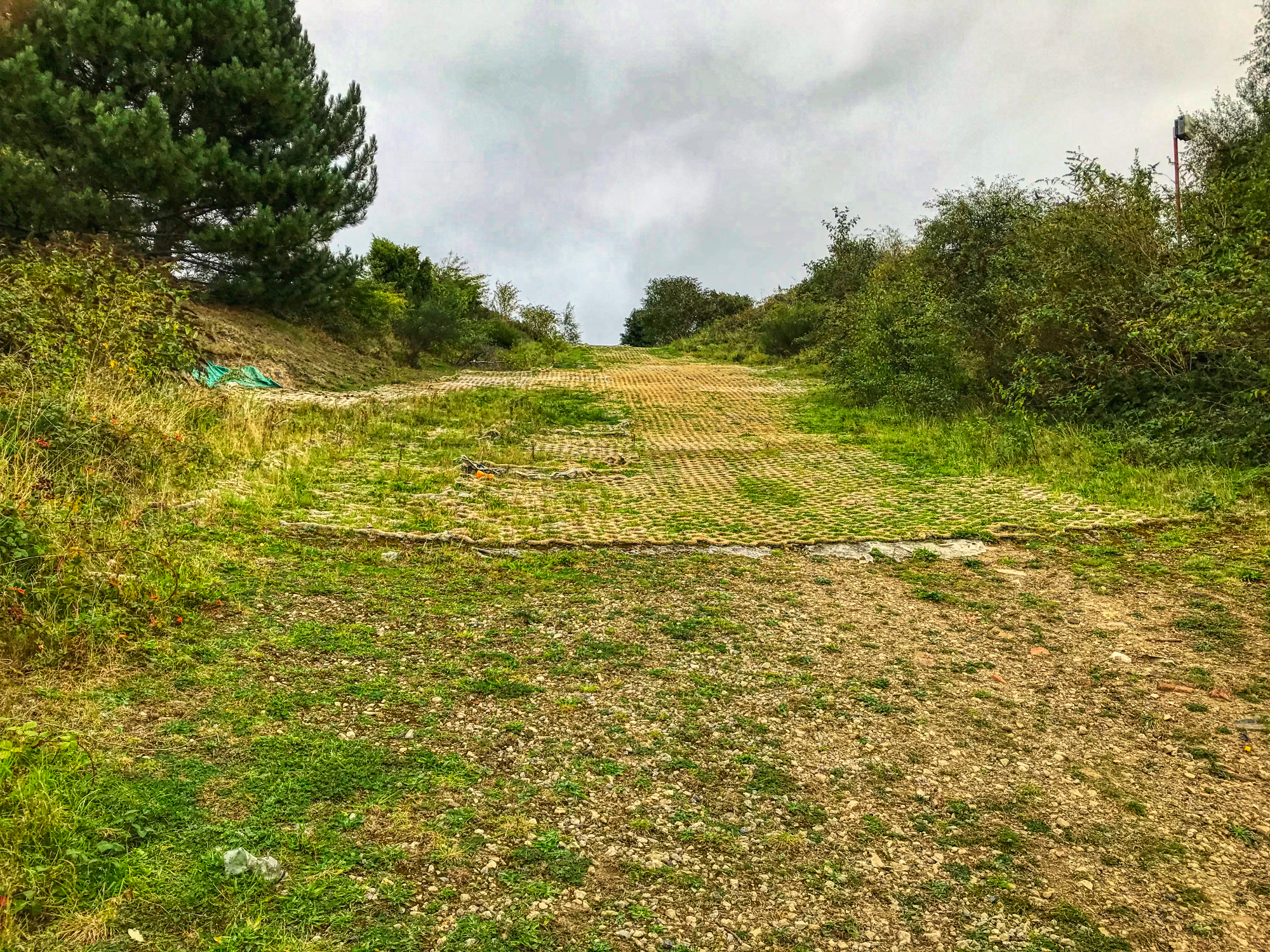 I did find myself breaking into a forced run at times and had to stop myself. Someone left both boots behind. Could it be that walking barefoot is easier? 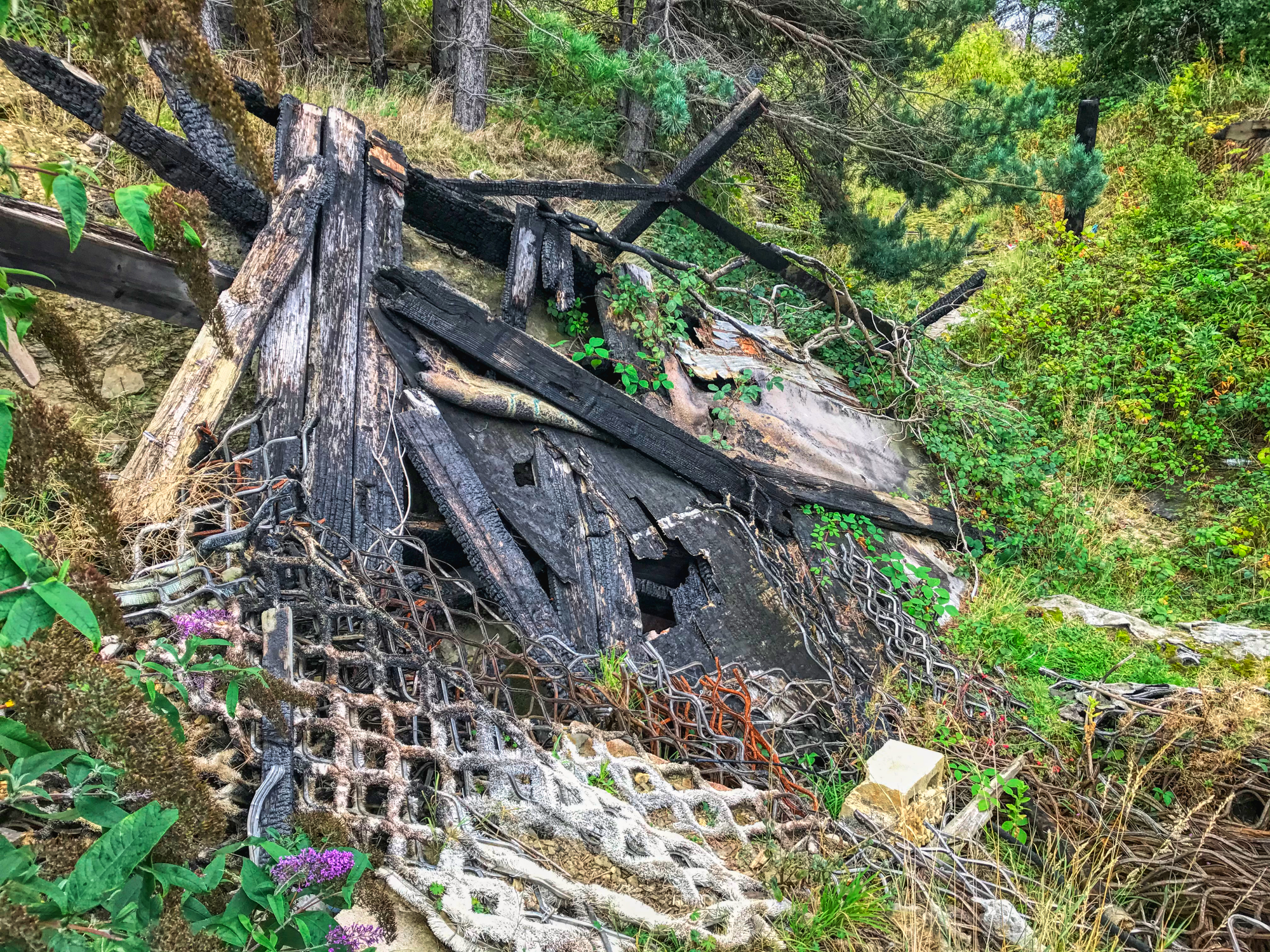 There wasn't much left. It was probably a changing hut or snack bar.

We spotted a few walkers while mulling around. Anyone can walk freely around the area, and I thought gangsters were on to us when we arrived. I need to keep a handle on the paranoia. 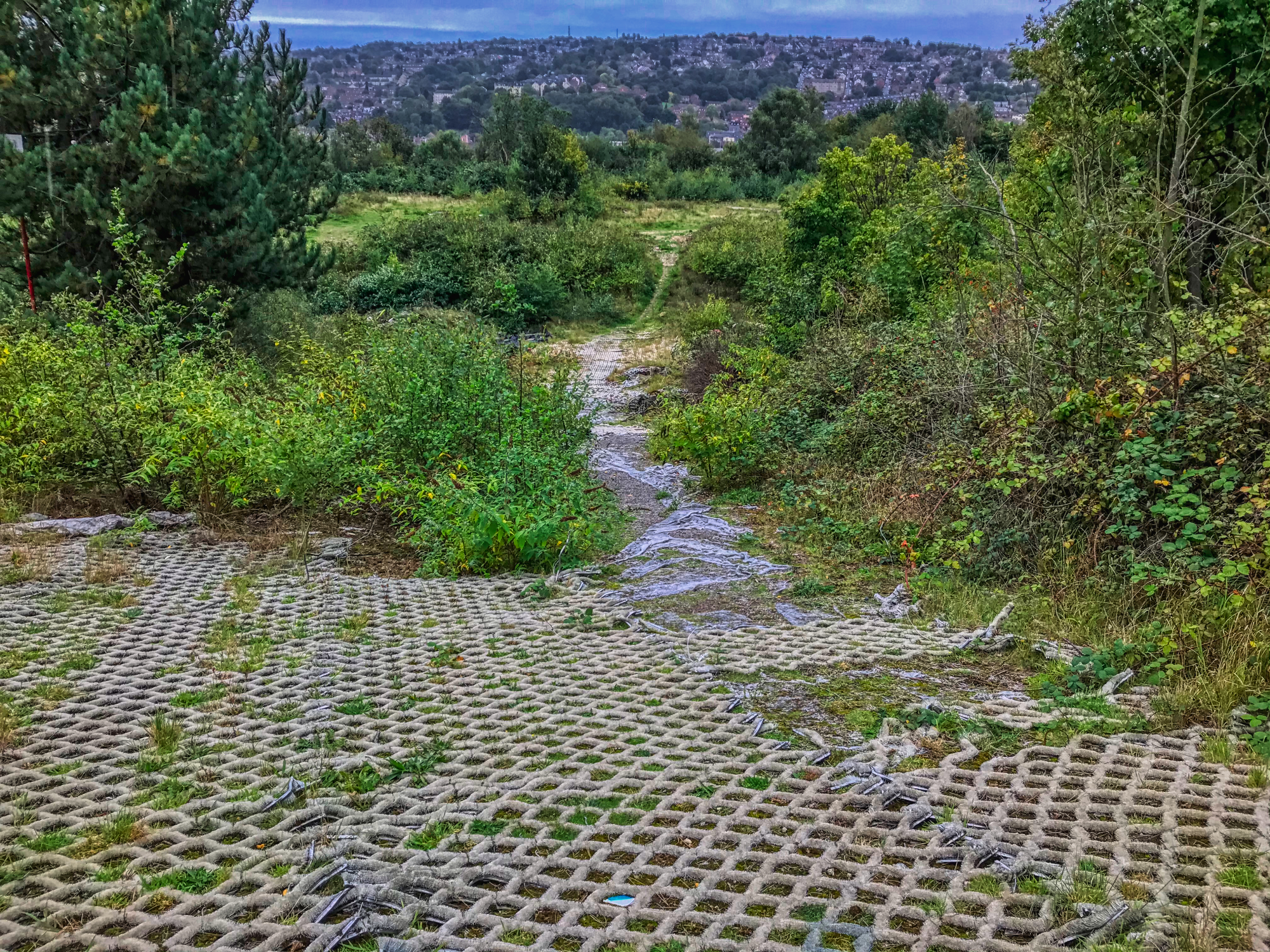 Sheffield Ski Village had to be visited. It’s a little like a cult place but don’t expect too much. 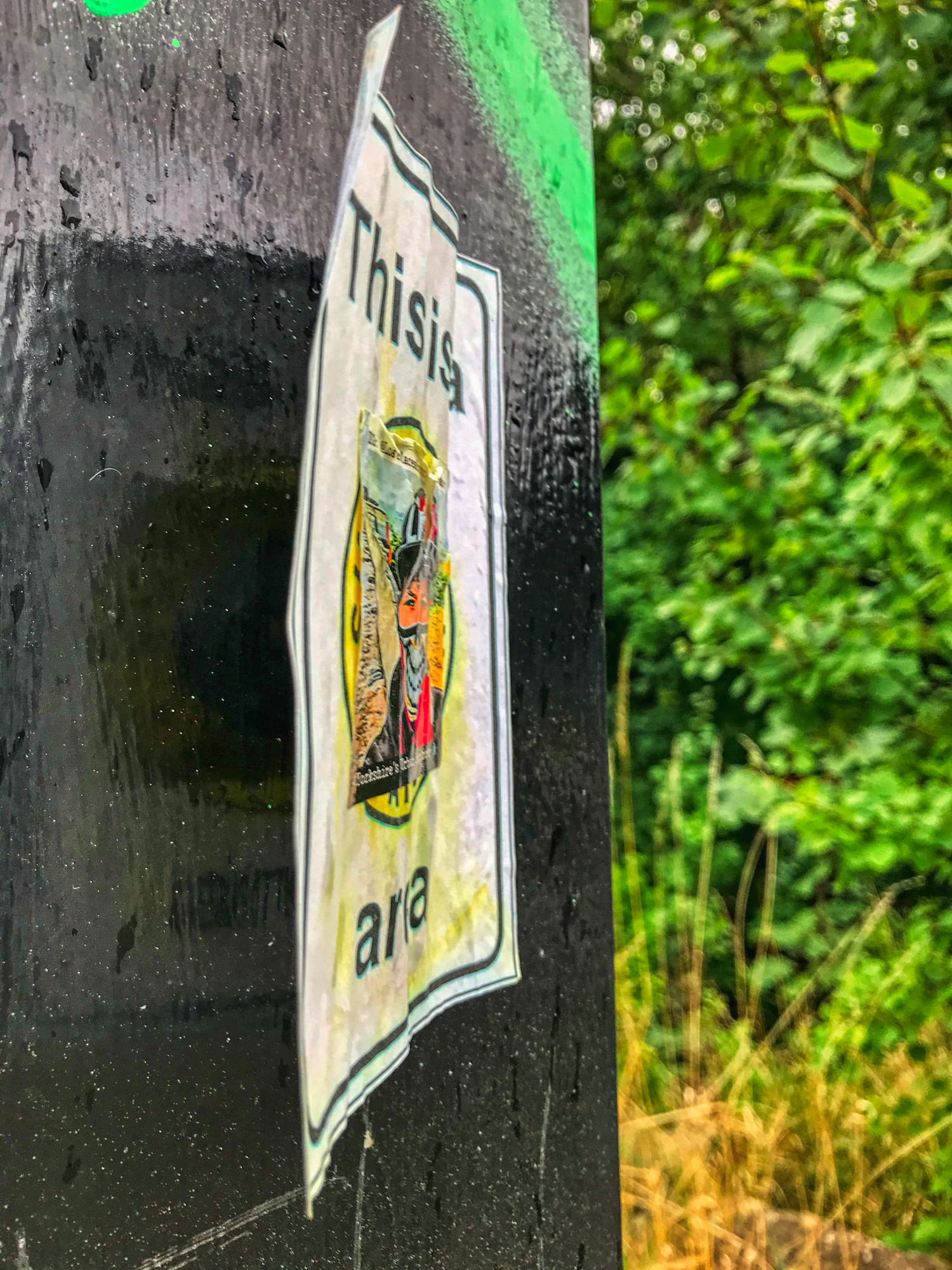 The sticker is coming off. Maybe I was looking at it from the wrong angle the first time around.

@slobberchops I liked your story just a bit so I up voted it. I have up voted a few of your posts recently and a few times on the other blockchain. I read many post but don’t up vote them all. Of course I am more likely to up vote one if it has a very high payout.

You should ignore my posts on your bad list, then make a nice face:) Then read and up vote my posts.
Problem Solved!

By the way all my earlier post tell a story, (great short stories) even my chess post.

No hards feeling man, I have flagged others in the past and we are now friends. It can be the same for us. Just spread your vote and others will see what you do, and you will be the better for it.

'Self-voting your own comments is frowned upon in the community'. Please make a note of that.

It's amazing and more than a little shocking how much, or should I say how little can be left behind from a vibrant complex just a few short years later. I thought it a tad ironic that it closed in the very year we hosted the Olympics!

In some ways Urban exploration may be the last documented and verifiable fact that anything was ever really there, there's something a little melancholic about that.

I massively envy you these adventures. In fact something just struck me, we used to have one of these dry slopes on the hills a few miles from my home. I'm gonna look it up to see when it closed and the circumstances and then who knows, maybe I could finally try my hand at urbex?

Although I could imagine I too would have to reign in the paranoia. This venue didn't have the creepy discarded dolls or the antique books and the layers of dust that spoke of deep history, it had a very different feeling to me reading/viewing it.

It was something akin to a fallen giant, like looking at a dead dinosaur and thinking what a waste it is. Great photos to document another adventure man. I hope you and yours are doing great 😎

Give that place a go, and see what's left. If the bug bites you, it bites hard and you will become the newest explorer on the block. I am preparing now for a full day of more adventures. There's nothing to match it. !WINE.

However that does not mean (as you have proved before) that there is no history to be uncovered at the site. You have planted a seed in my head that shall be nurtured on a day when it isn't bloody snowing...

HA! We all started to feel those first strains of Summer then had it bitterly snatched away lol.

Here's hoping for a long hot Summer just like '76 and an easing of all these bloody restrictive measures that sees us benefit from it. Take good care man and thanks 😎

A cracking view from up there though!

It started out like a famous five tale with talk of Gypsy camps :OD

Now... you are taking me back!

They had many a fine adventure!

It started out like a famous five tale with talk of Gypsy camps :OD

That's too many hours reading those Blyton books in my early teens... 'with lashings of ginger beer'. When I tried that root beer stuff for the first time (in the USA), I almost gagged. Liquid germline! !WINE.

That's was exactly the same as me. It was much better in my head than in real life!!

I'm wondering if I've skied there. I was in the ski club at uni and we did races at various dry slopes. Not that I was that great. Some people in the club had been GB juniors. Was fun anyway. My nephew is in a ski club in Edinburgh. They have a big dry slope there.

Probably not after reading this.

Sheffield Ski Village was an artificial ski slope complex in the Parkwood Springs area of Sheffield, England which operated from 1988 until it was destroyed by fire in 2012.

It was built after your junior years. There's one a Rossendale close to me. I tried it once around 1980 but failed to get the bitten by the ski bug. It's old, but large and still there. !WINE.

I may have been in that club around 1986, so maybe not. Now we have an indoor snow slope at Milton Keynes, but not been in a while.

There is definitely family home video footage of my family at this place. It was unbelievably windy when we did it. I was probably about to 10. The audio on the entire video was like someone farting nonstop in to a microphone for 40 minutes.

I remember the lodge/reception area and having more fun playing with a ball than the tensions skiing haha!

Weird there’s nothing there at all except the matting.
Not even a lift or cables?

You have been there? That would make it extra special for me (like Camelot). There's nothing left besides all the mats, and lots of them! !WINE.

I can feel your emptiness and that anti-climax.

The boots and sticker are the most exciting things. They do inspire curiosity and mental 'fill in the blanks' story.

What is that this mesh like thing that is affecting the design of the grass? I kind of like what it's doing there.

It wasn't the best explore, I tell them all.

be nice to see the plans to resurrect this place again come to fruition....hard to fathom something as niche as this, in a city as big assheffield and the catchment area being allowed to fail.. sad really..