I am not a religious person and am not one to enter a church to 'wow' over the décor. That is unless it's abandoned. 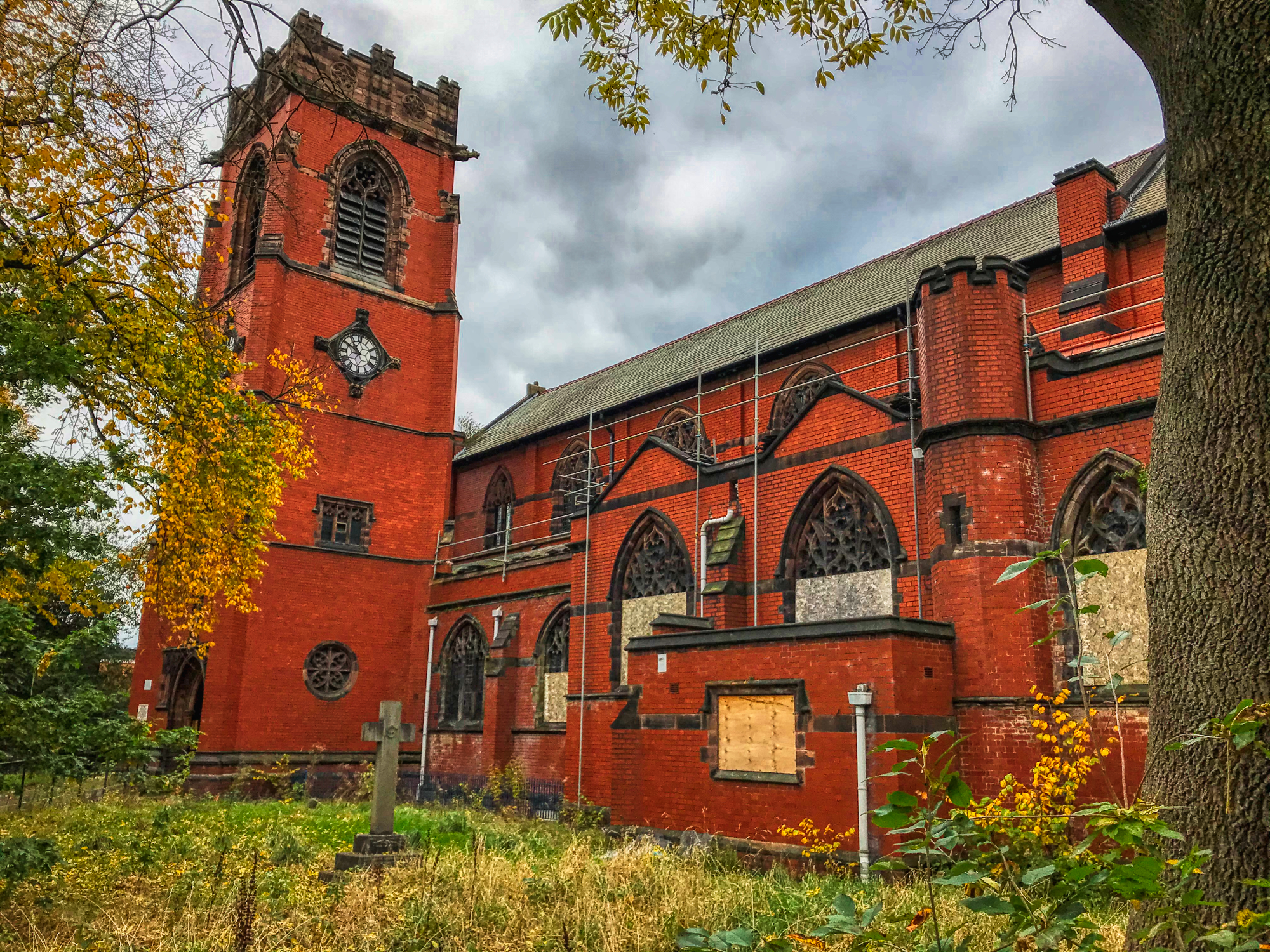 Then I find them fascinating; the smell, the decay, the inhabitants, and the overall broody atmosphere that can intoxicate you. "I don't think we have a chance at this one mate", I told @dizzydiscovery with a sigh. We looked upon the majesty of this frowning gothic relic that looked down on us. 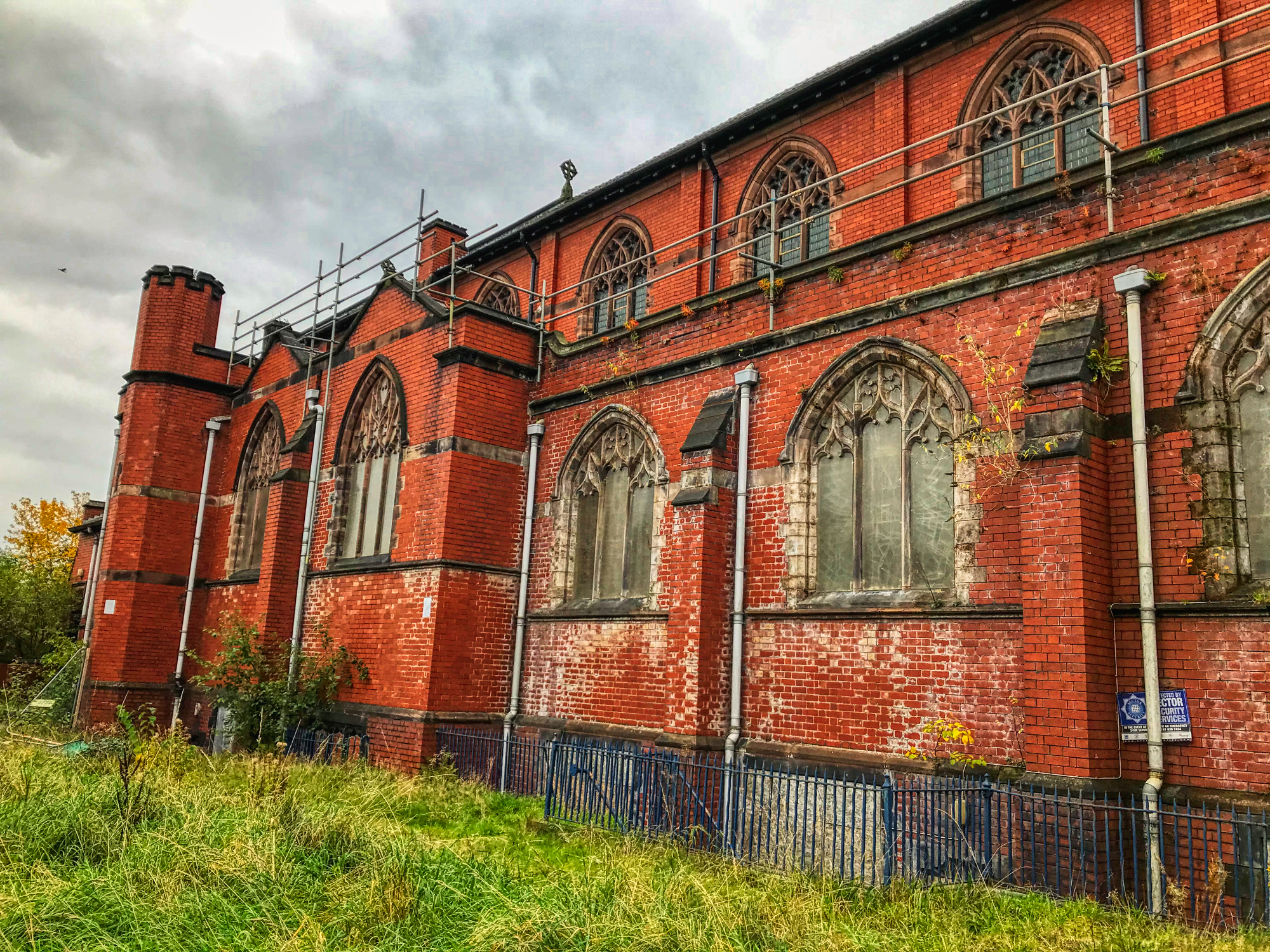 Some scaffolding was erected around the front meaning renovation works was, or had taken place at some time. On the other hand, the grounds were reasonably overgrown and it was getting shrouded from the roadside due to tree density. 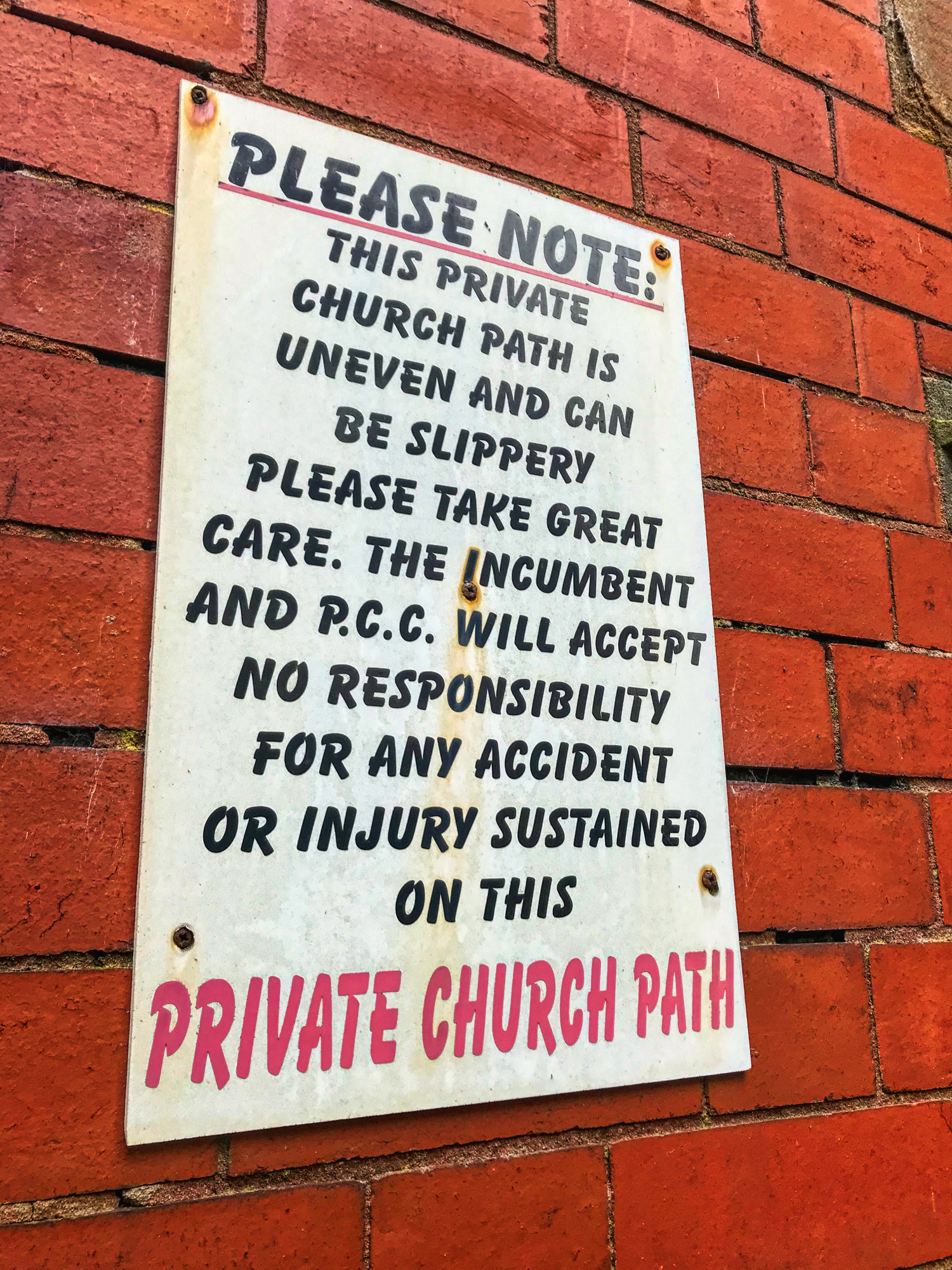 St Thomas was yet another tipoff from @anidiotexplores who at this point had not yet had a look, but warned me of animated druggies hanging around the back area who may attack on sight with used needles. It was this area we checked out after walking around the front and getting nowhere. The chains were fresh and I am no Harry Houdini who now works with combination locks.

Jeez.....I have crawled through some dodgy holes but this one was testing. Talk about tiny. Head first, I had to inch my way through avoiding some jutting glass that kept reminding me it was there.

'One slip pal, and I will have you!', whispered the tormented glass in my ear as I grunted and toiled trying to stabilise myself on a ledge. 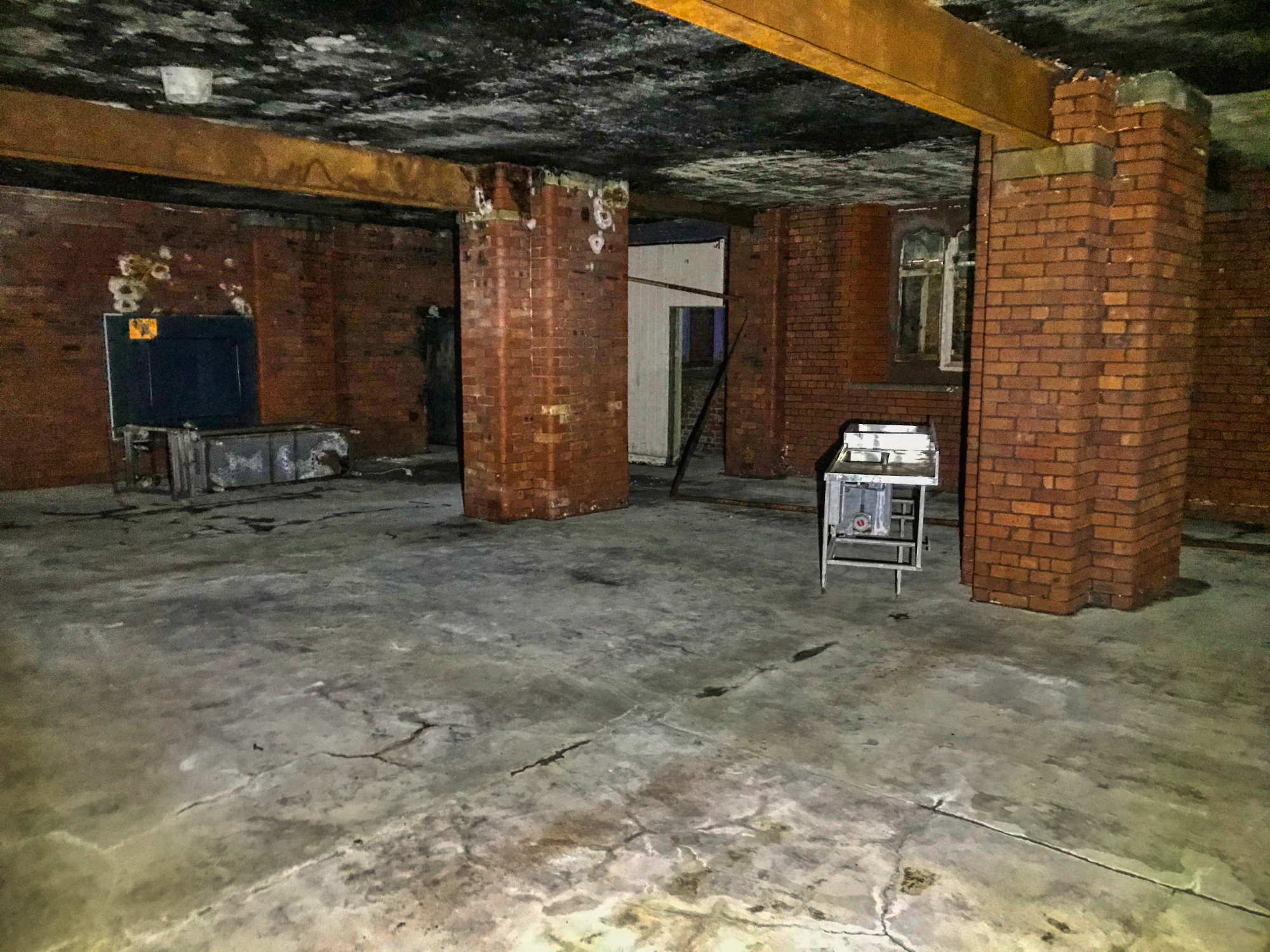 Then we were in. We looked at each other amazed that we still had our bollocks intact. Miracles happen... occasionally.

The initial sight was disappointing. The church looked stripped or at least this part of it. 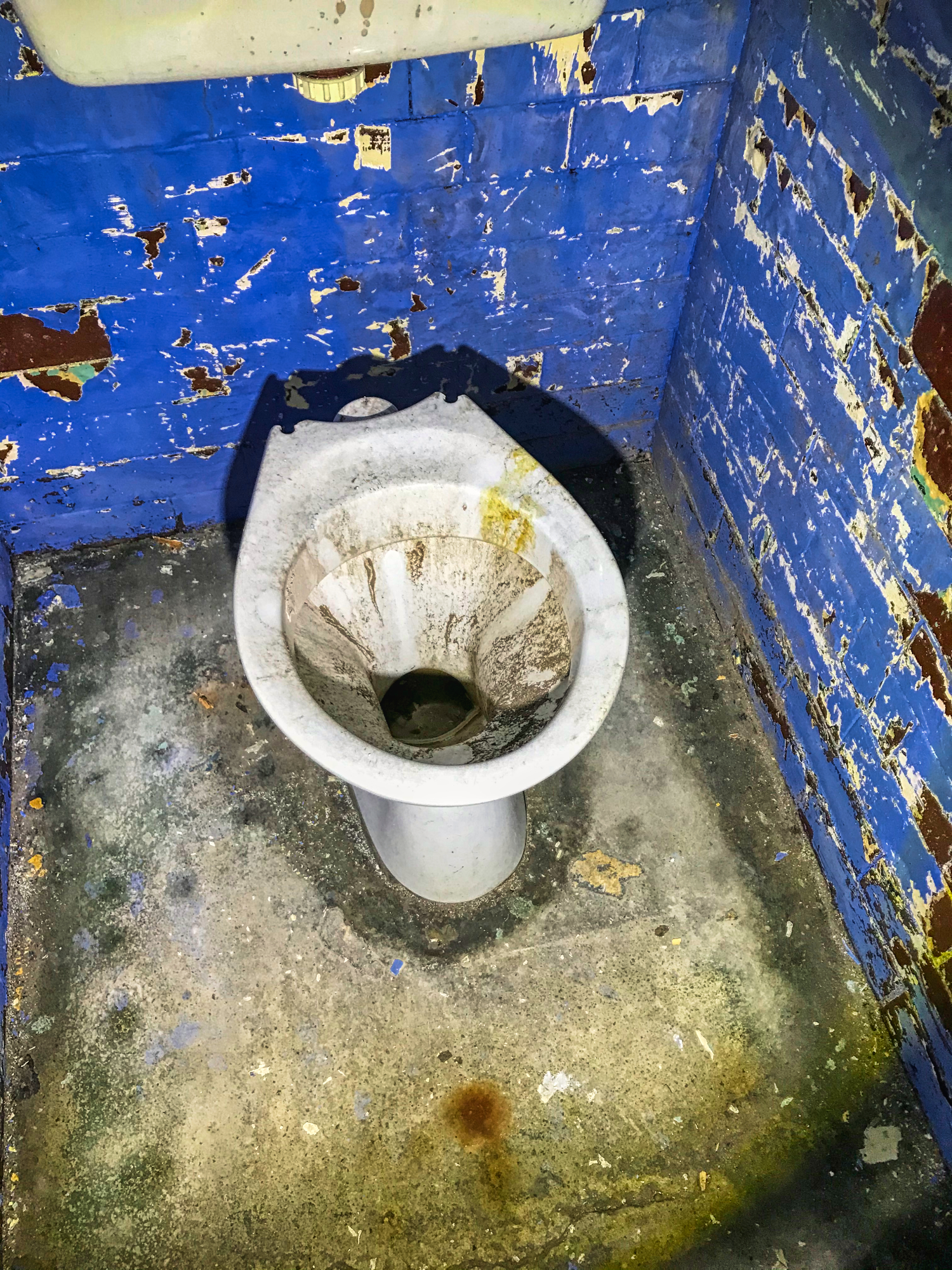 Some toilets are out of order, and some available. I have seen a lot worse. We found a predictably empty safe. I always look in case the family jewels have been left, or in this case the church riches. 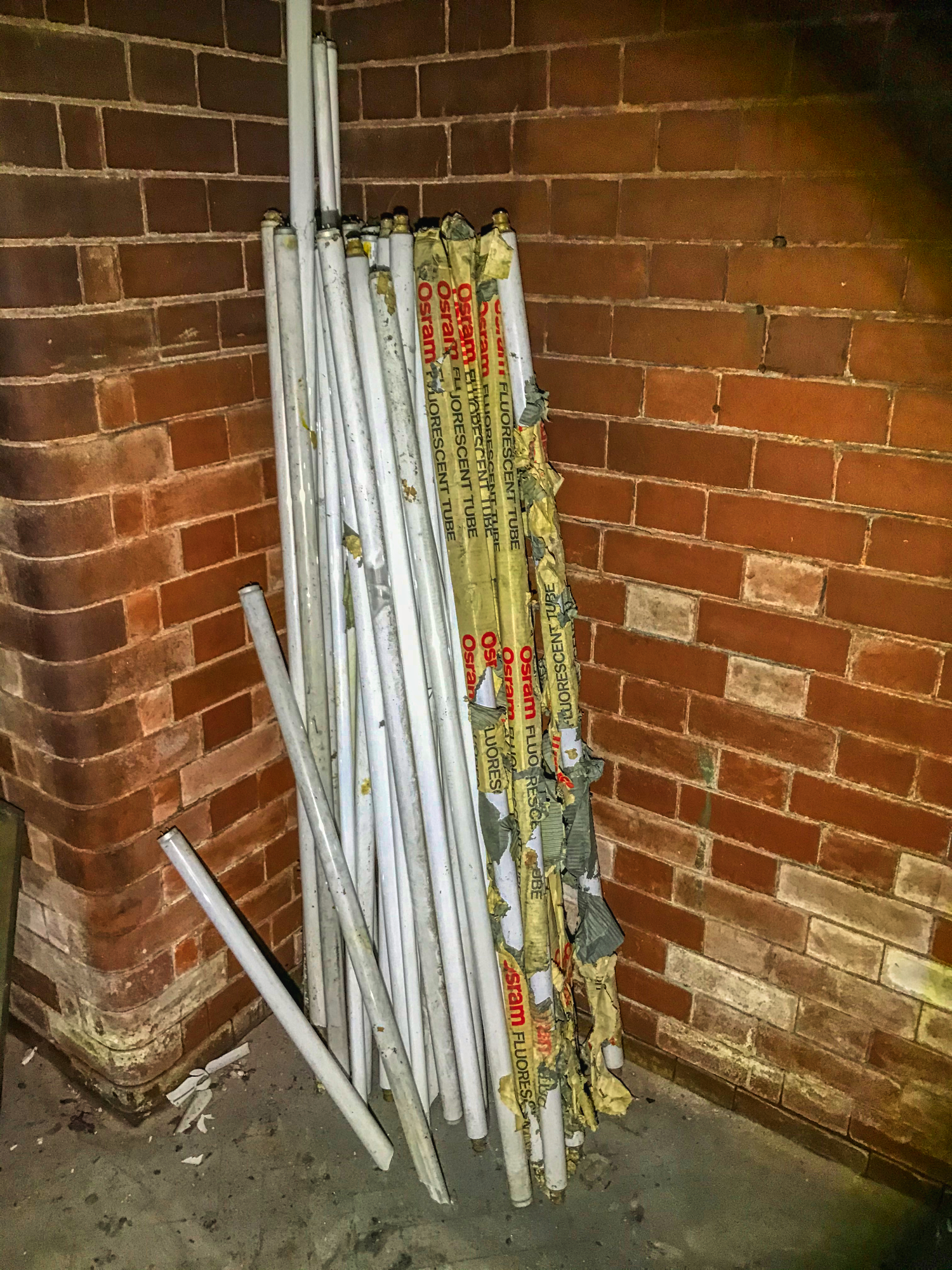 Fluorescent lights and a sealed door that was the entrance to the church proper. It was boarded with those cheap wooden seals and I was surprised to see indoor sealing.

…’were they expecting intruders to breach this entrance and so felt the need to seal it again?…’

In any case, we don’t break in and so disappointedly made our way into the large dark bleak room again. It was then we noticed the door. It looked locked but on trying opened with an almighty creak. 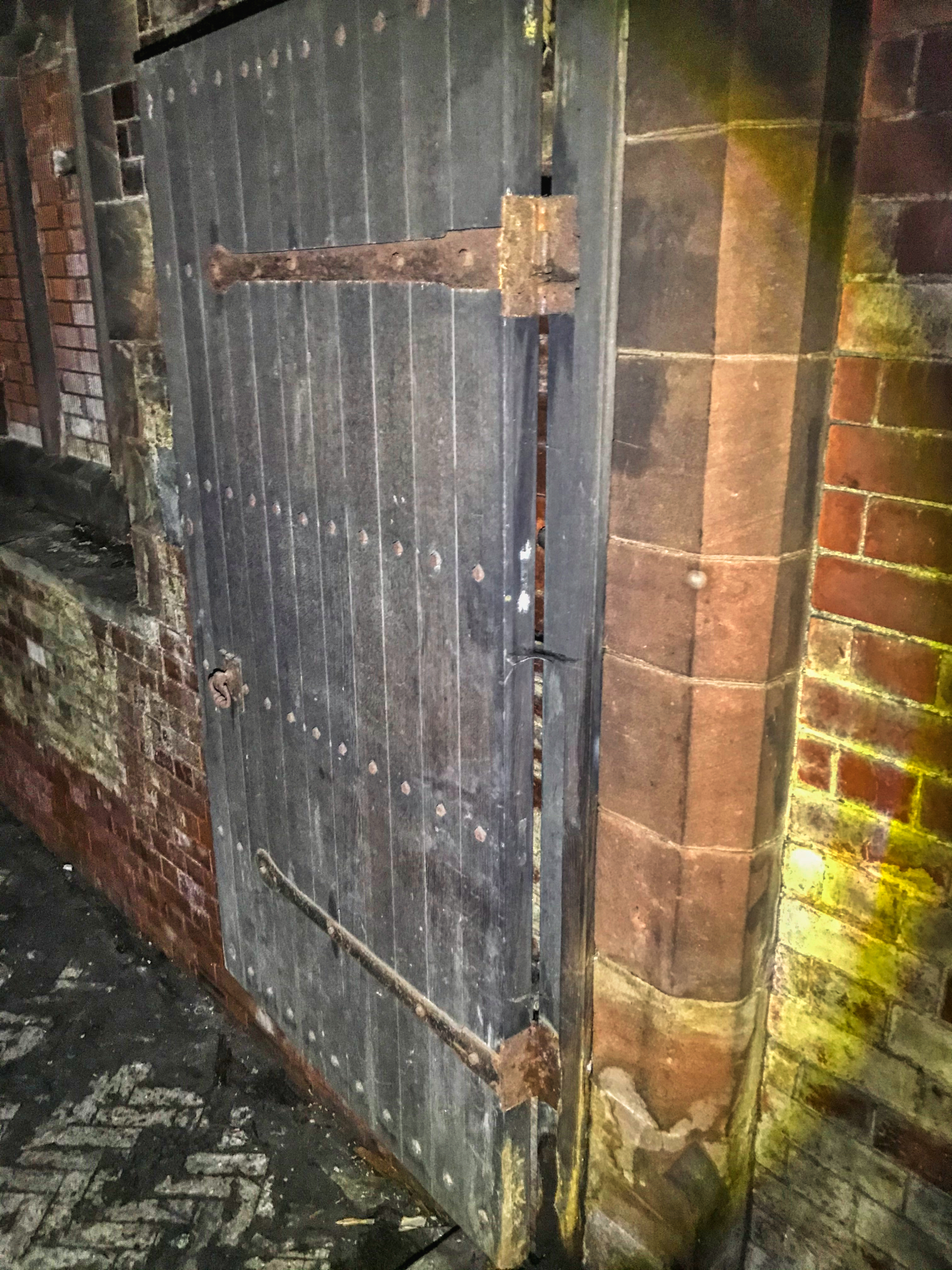 'Shut the fuck up door', I thought ever conscious that someone might hear despite the fact we were largely away from the general public.

A spiral staircase loomed in front of us. Had anyone been up here in decades? Brushing away the cobwebs I started up with a tentative @dizzydiscovery in tow. It went on and on getting narrower as we ascended.

The cobwebs grew thicker and brushing them away was getting repetitive and annoying. 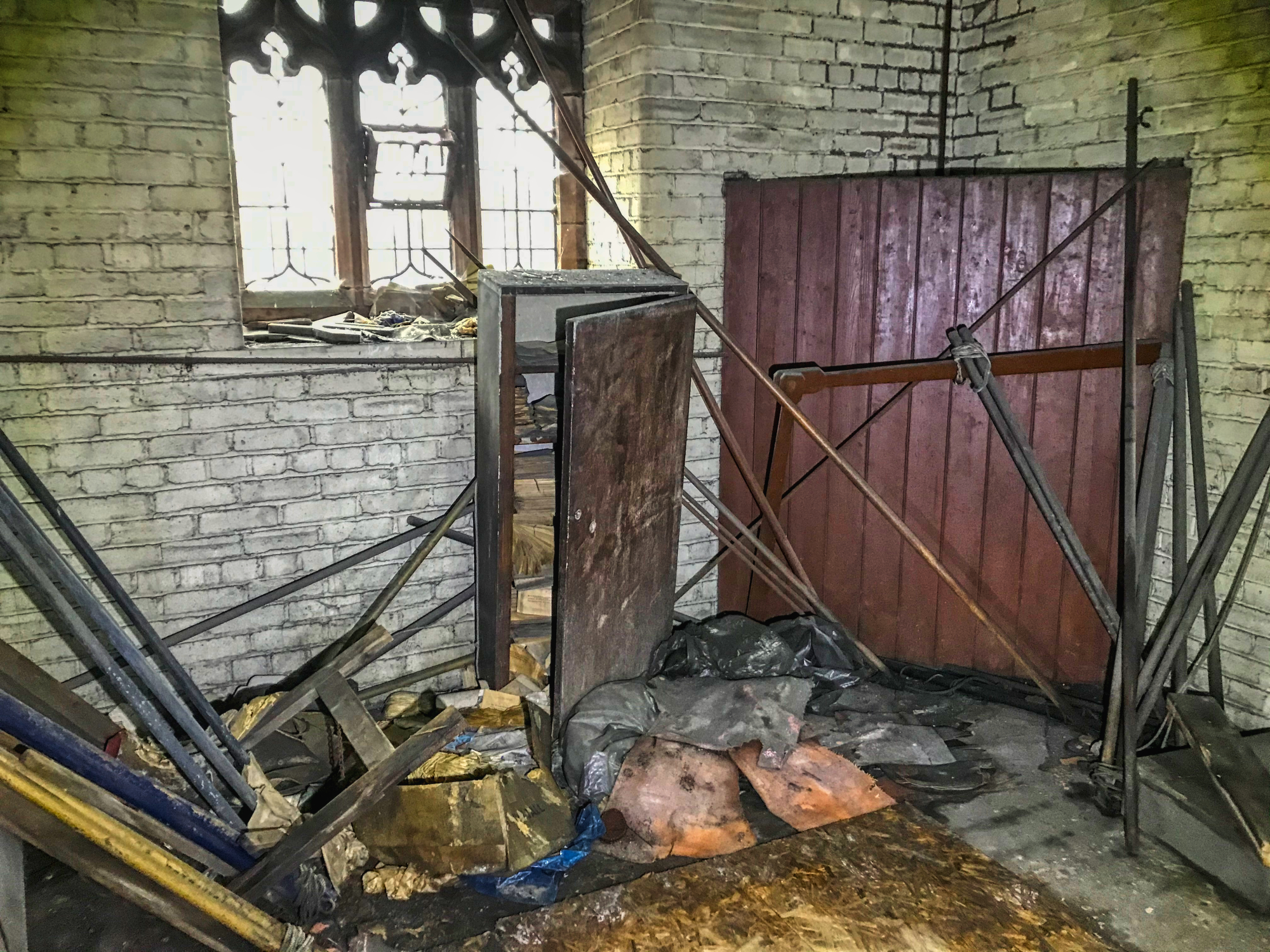 After what seemed forever and with the staircase still spiraling upward, we entered a room with some junk in one corner. Junk that had been around for more than half a century! It was those donation envelopes often used but from 1958. No wonder they were covered in dust and crap. Doubtless, the pamphlets were from the same bygone age. 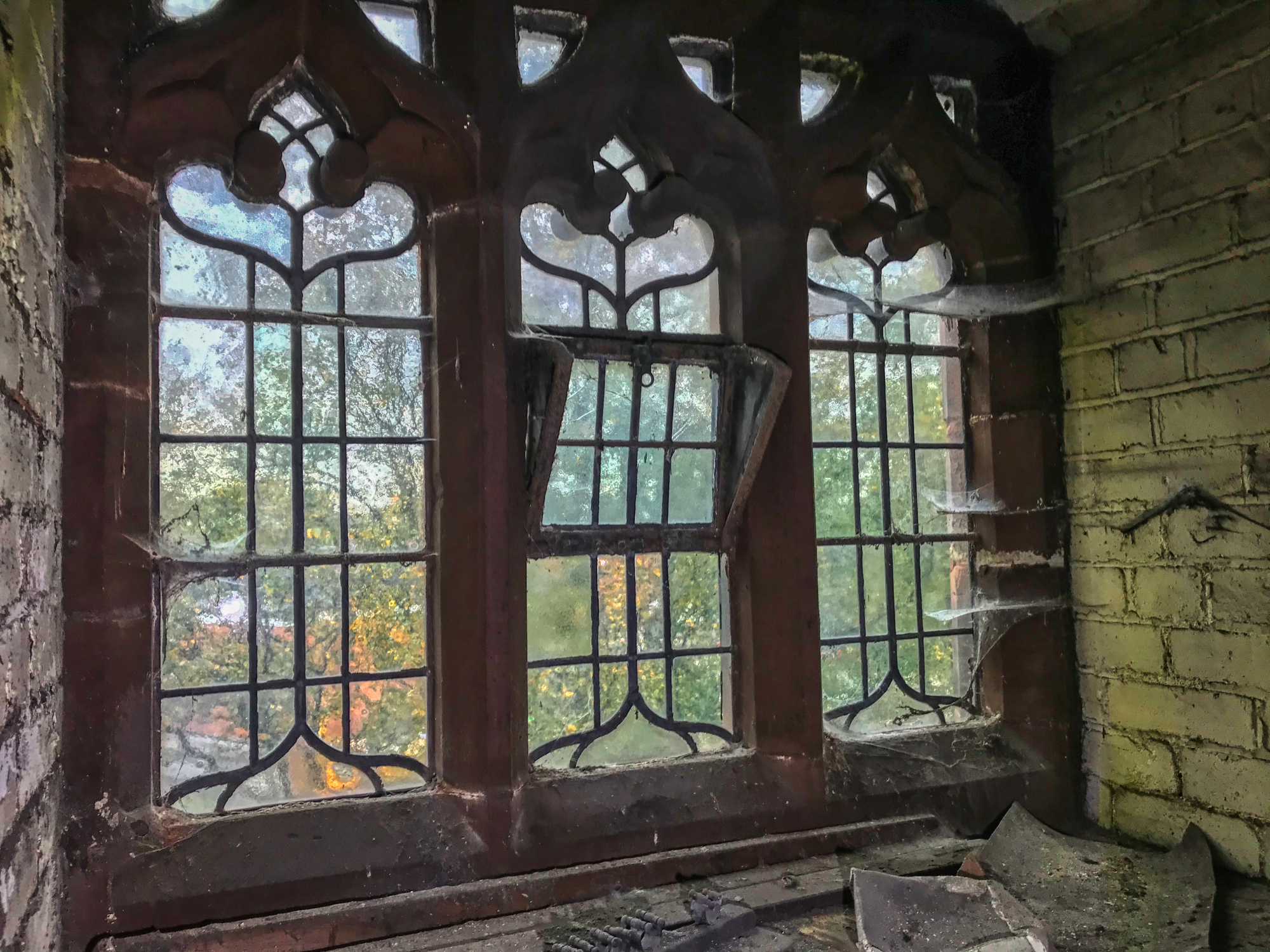 Continuing the ascent I was hoping this was experience was not going to somehow metamorphosis into 'The Game of Death' and a 7ft+ Kareem Abdul-Jabbar would not be waiting for us in the 'next room'. I watched far too many Bruce Lee movies when young, so my mind goes off on one occasionally. With no Karim in the next room, I surmised this was the bell tower. 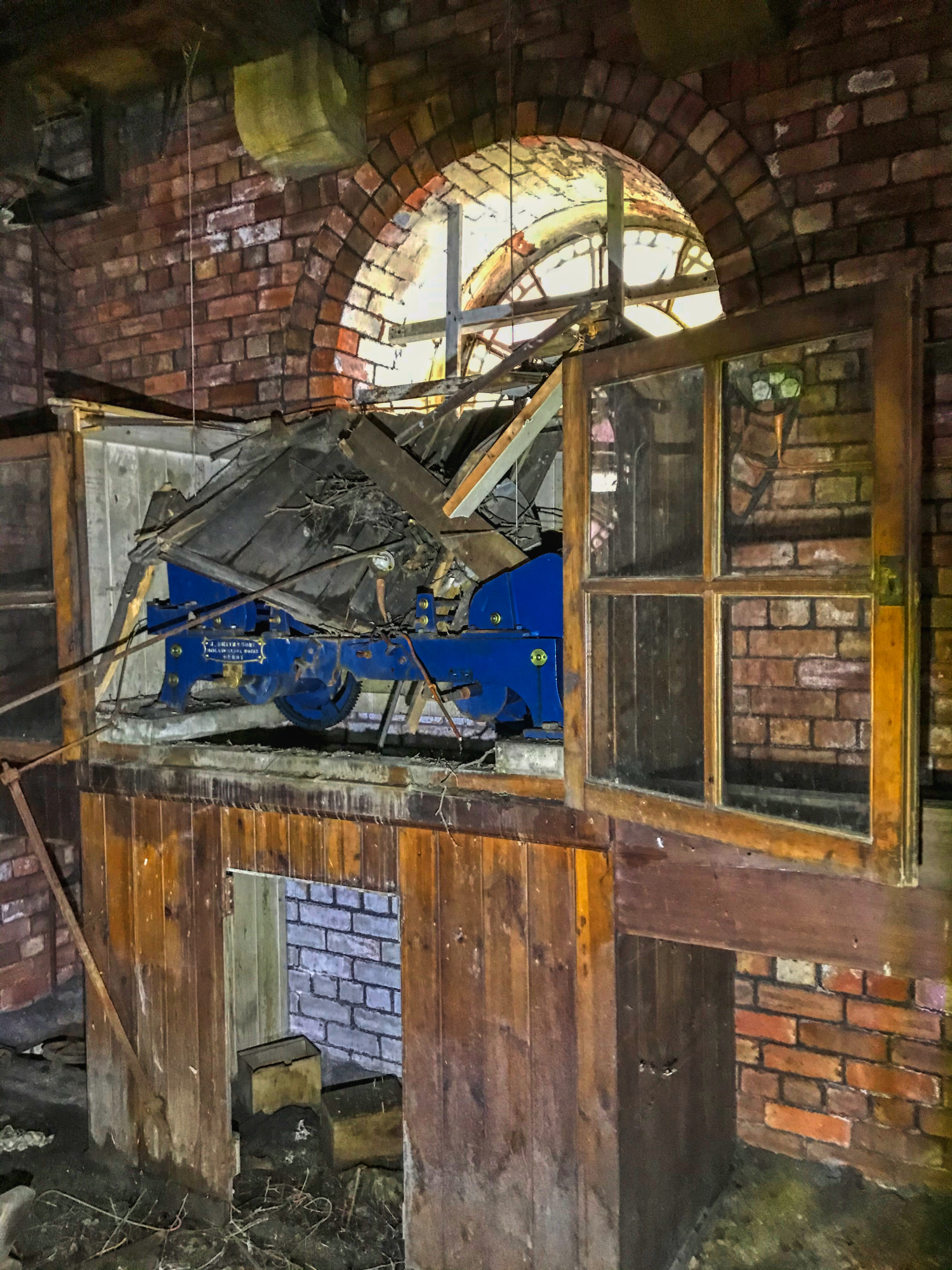 What that mish-mash of machinery is, I don’t know. 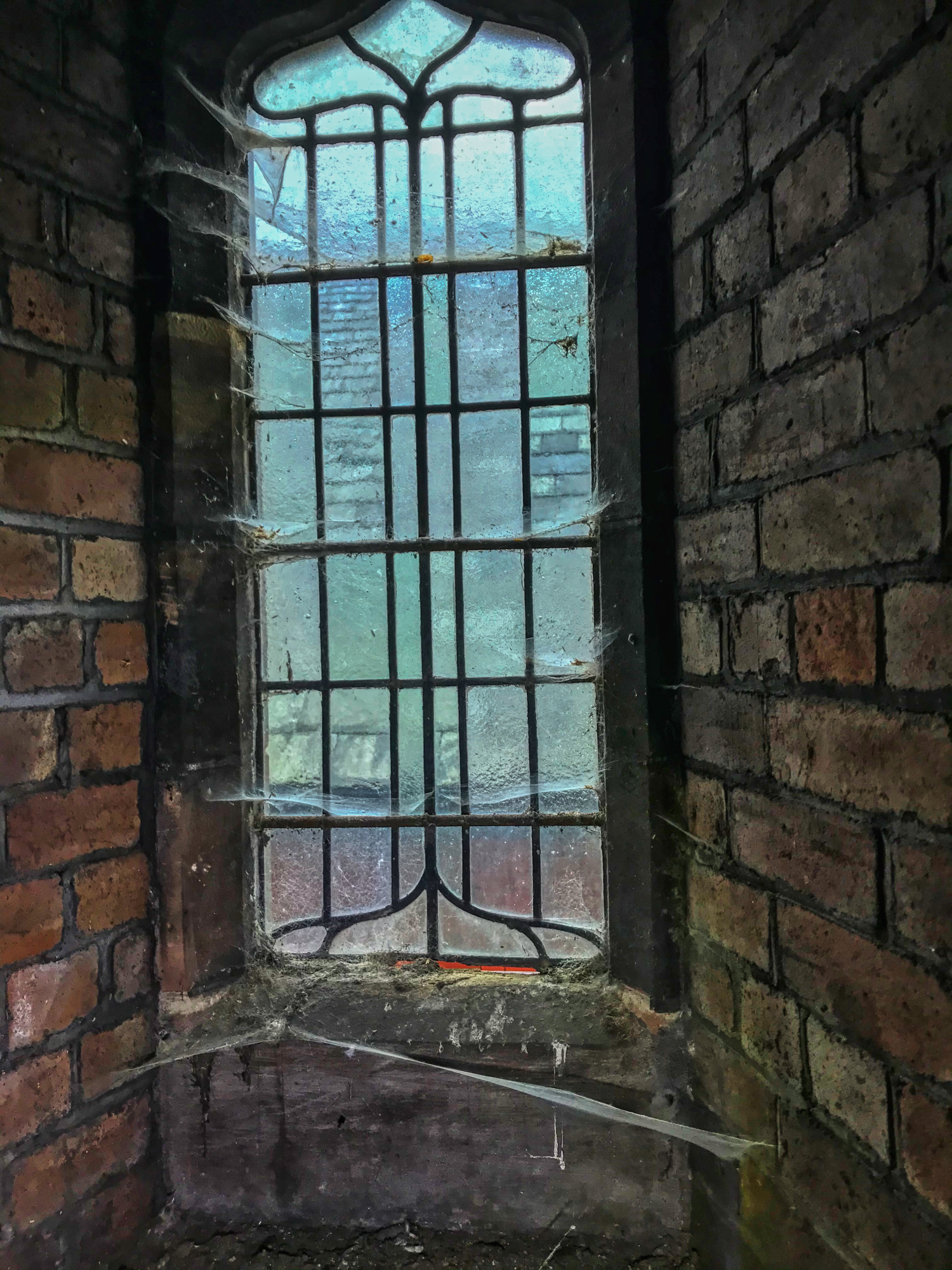 It’s rare to see these places, though I was lucky enough to get a trip up Big Ben in 2007, due to working in the Palace of Westminster. This one looked less gleaming than the London famous counterpart and of course, it's not an organised trip which makes it much better. 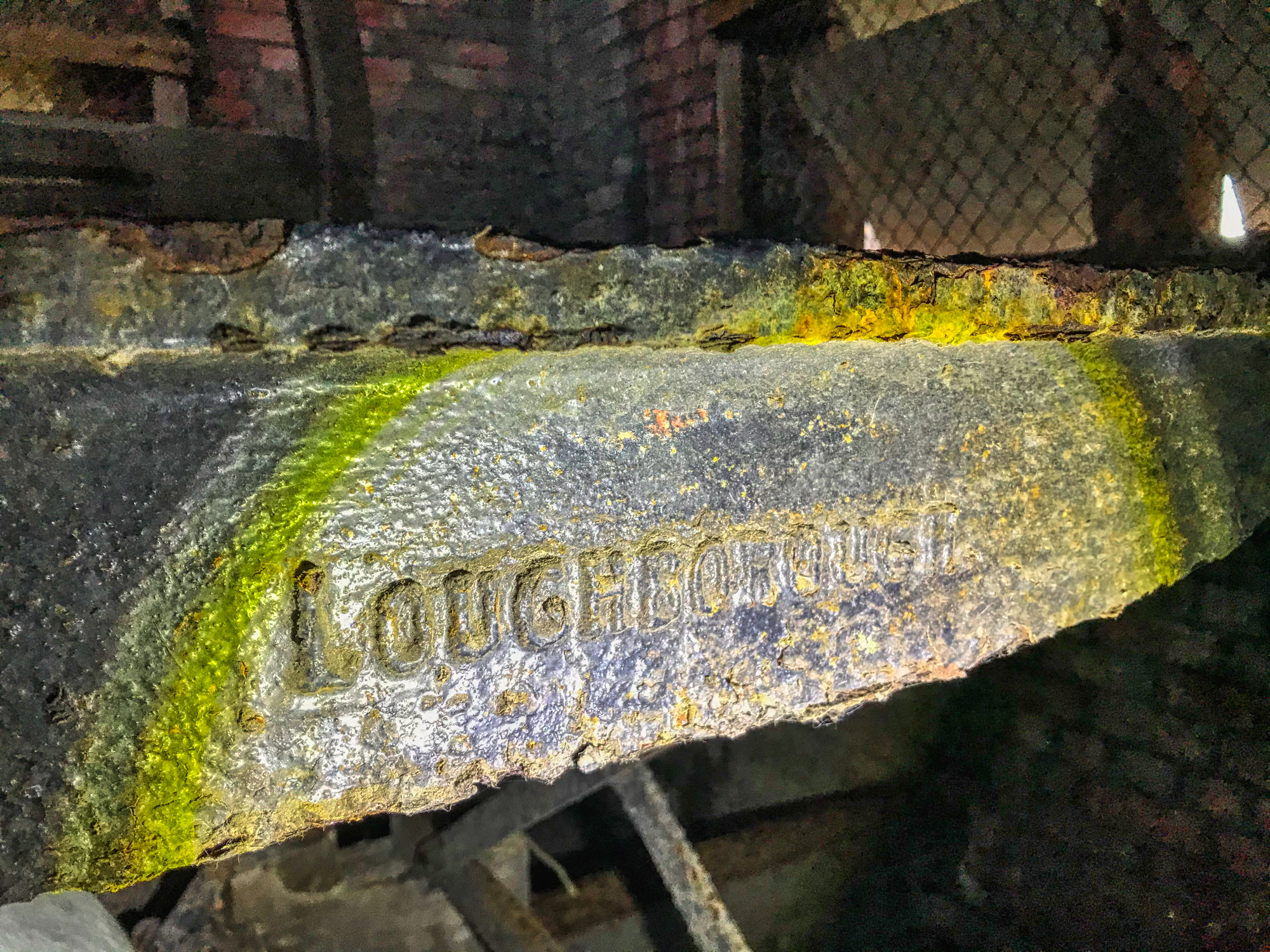 'Loughborough' the ageing metalwork says. That's close to Leicester which is in the Midlands.

Continuing up we eventually reached the top with some nice local views (which I didn’t photograph). The door I did.. as underwhelming as it may look. 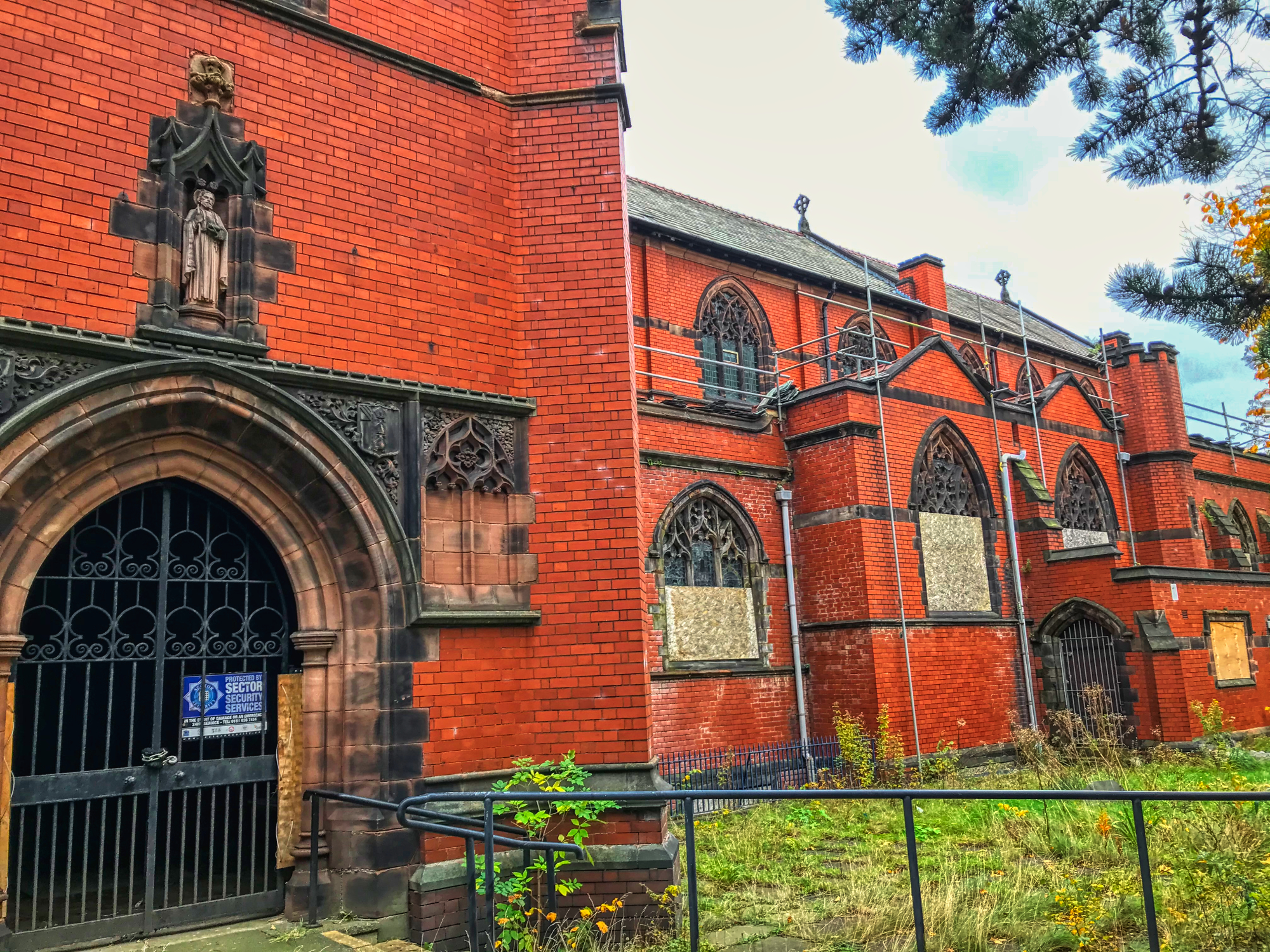 While it was disappointing not to get into the main area, the trip up the tower made up for it. I love seeing items from before I was born, that was a pure bonus! No drug adducts were to be seen, neither inside nor out. We took our time a little more on the exit. That glass was still out to get me and failed once again.

For real? You didn't get any photos from the top? Was it because of your vertigo or did you just forget? That would have been really sweet. Talk about a creepy stairway. I would have been tentative too!

I should have, I went up but @dizzydiscovery who has worse vertigo than me abstained. I guess I was more into what was inside.. than the views. It was a little sketchy on the top.

Another epic peek into the past, religious encounters of the third kind...

Running off paperwork was an invention churches used to use all the time, those other envelopes look like their tithing system.

Most valuable thing in there was the bell and tower, great you had another good trip around exploring.

I should have checked them for old coins! Seriously.. they printed far too many, just who were they expecting in 1958... Jesus and the disciples?!

Missed opportunity... these places know how to fleece you, convincing you it's the right thing to do, then wasted on printing for hand outs to make them feel/look good 😕. Perhaps next time!

Brilliant explore matey, glad to see inside the bell tower though, shame about not getting access to the main area, but certainly looked worth the effort of getting in.

It was different and unexpected, the great things about all this.

Hey, seems like you have endless Urbex to do there! This one doesn't look so abandoned from the outside, until you show us the interior... and I have always enjoyed your vivid descriptions - feels like watching a movie each time, haha!

I do have endless stories it seems, these are still from last year. I haven't started the recent ones yet!

Another great exploration, it would give me a bit of a chill to go in there.

You get used to it, I rarely get the creeps now. It wasn't always like that.

Looks fairly untouched as there was a lot of smashable stuff there. Cool that you could get up the tower. Could the mechanism be for the clock? The building is quite a feat of brickwork.

Very untouched and probably sealed again by now as this was over 6 months ago. I am trying to get the last ones from 2020 written up. Still have around 6 more.

I love those donation envelopes, and that warning sign 😂 surely their imaginary friend would keep them safe?