slobberchops in Urban Exploration • 11 days ago

Having received some information that Pendleton House was ‘open’, @anidiotexplores accompanied me to this former government and courthouse building situated in central Manchester. 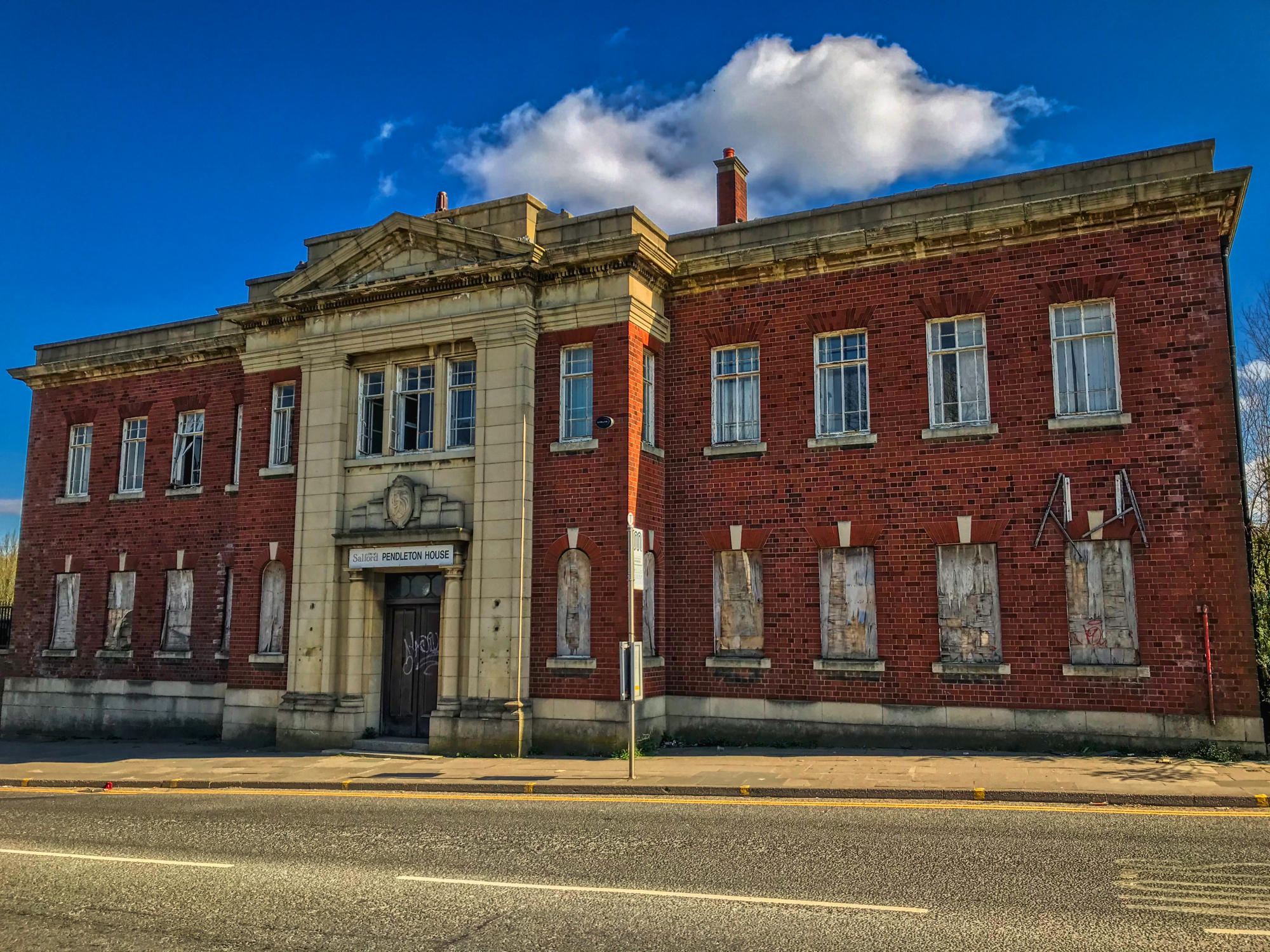 Having been before doesn’t seem to faze him, which is just as well as it didn’t take me long to get around the place, such is the wreck and mess I found inside.

Pendleton House was built during the Great Depression in 1936 as a Public Assistance Office, where the poor and unemployed were put through stringent means tests to determine whether or not they qualified for 'dole'.

Following the closure of the coroner's court due to accessibility issues, the building was used as offices for Salford City Council and Greater Manchester West Mental Health NHS Foundation Trust until around 2009.

The building was purchased for £790k by a developer in 2017, since then nothing has happened. – Src

The last part is a familiar recurring story. They buy these buildings hoping to demolish them and all the red tape gets in the way.

Perfect for us, the explorers to check them out before they are gone for good. Lately, I have been seeing more and more demolitions having arrived minutes too late so I am in no doubt it's gonna happen - one day. Getting in was laughably easy and whoever owns it should take some steps to deter the likes of me..., just a little bit. 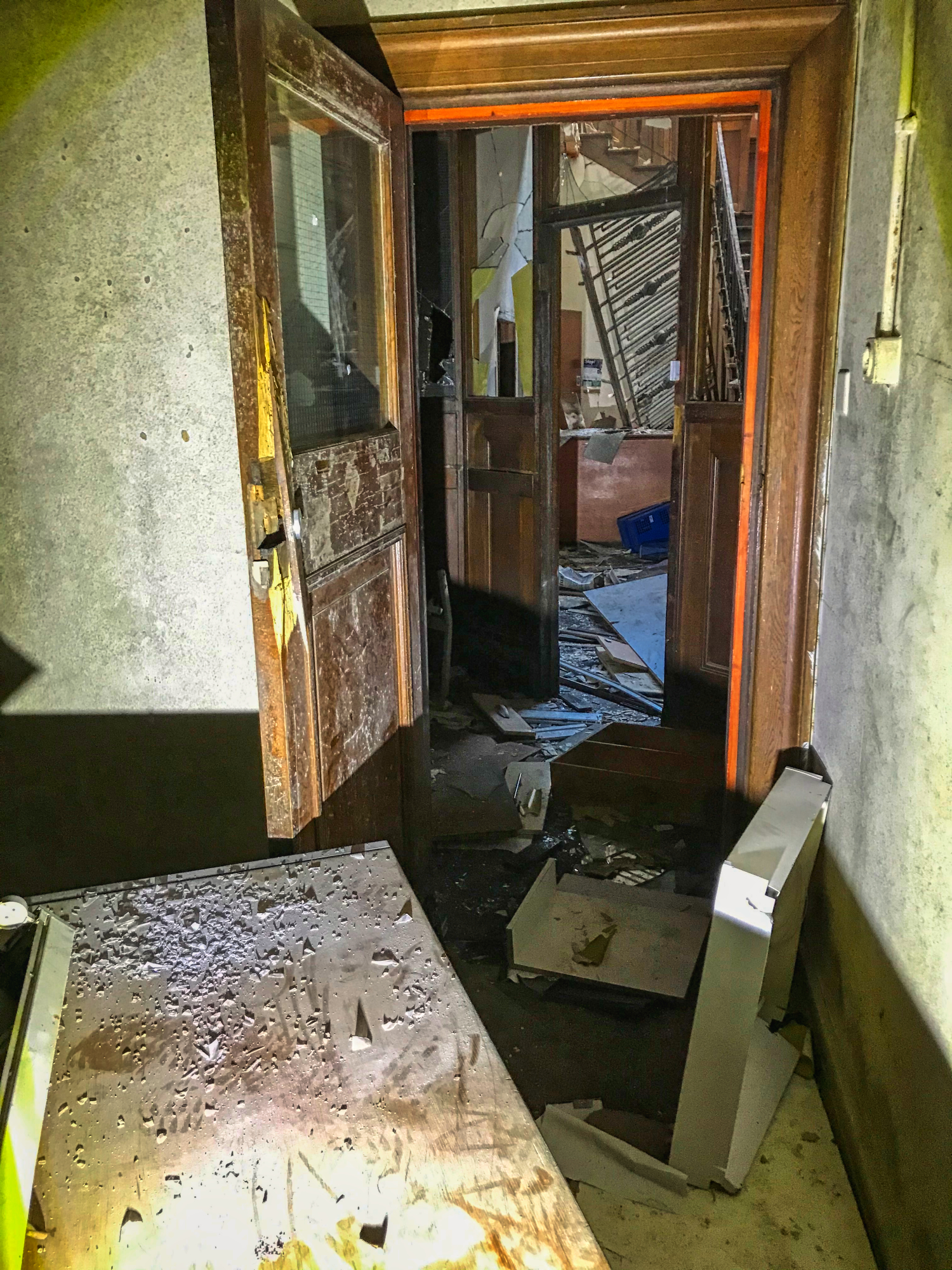 The problem with easy access is that every bastard has been here already. I have seen reports of the impressive staircase which was its last redeeming factor, but it’s now less of one and more of a mess. It didn't take long to find it and after bumping into another couple of explorers inside who @anidiotexplores started nattering with, I got on with looking about.

In this state of decay, it is still some spectacle. I can’t get it across enough that seeing these images and being there are two different experiences.

Some of the things I see literally takes my breath away, as our eyes are far more wide-angled than my camera can take in. 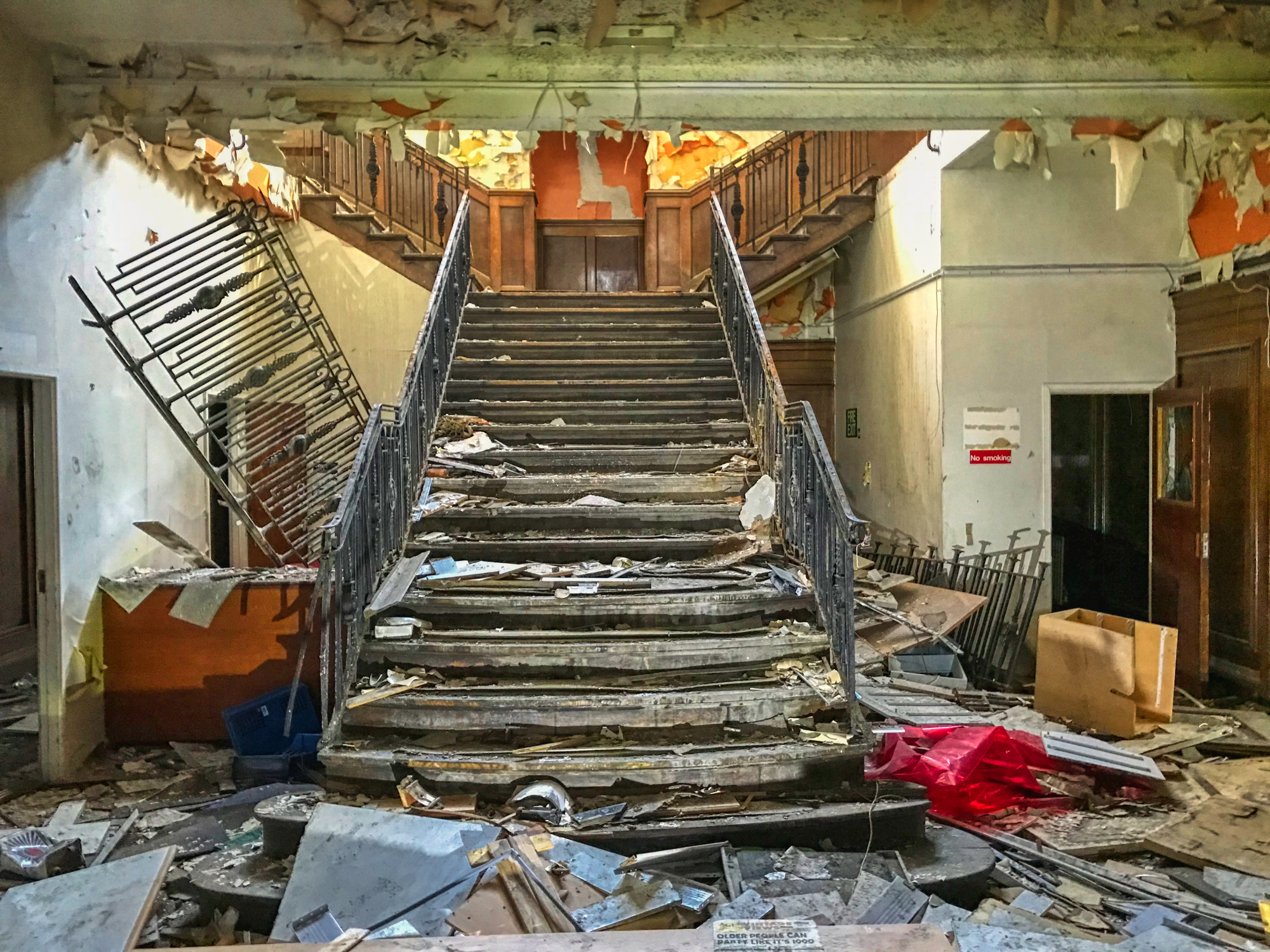 The dickheads had decided to pull away part of the upper railings which are now dangling haphazardly from the balcony. 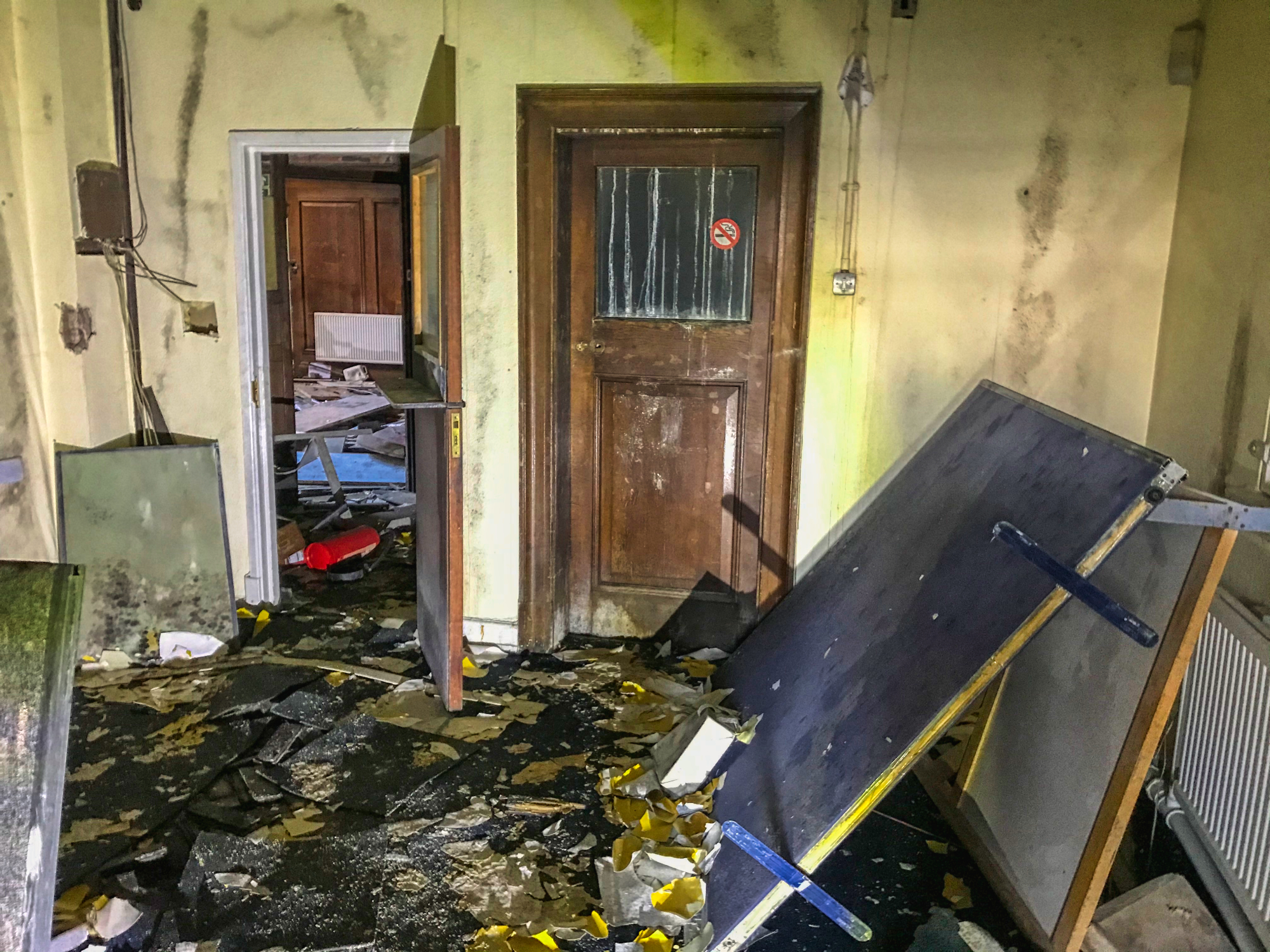 I searched the bottom floor in earnest looking for anything of interest, the place was quite stripped. The bogs were in remarkably good condition, lids intact to boot. I failed to check the contents on this occasion; I hope you are not too disappointed in me. 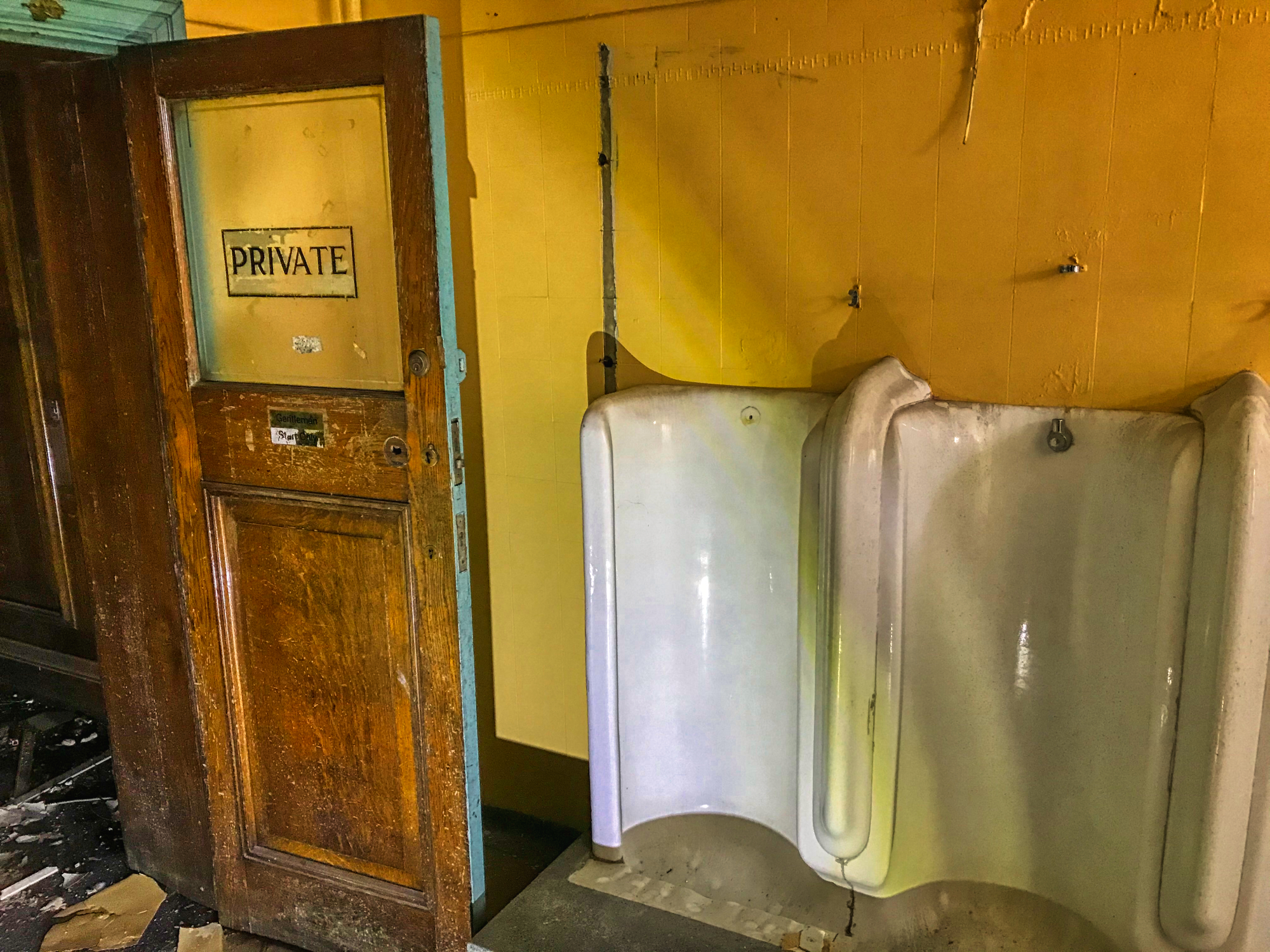 Why the Men’s, has a private sign was confusing. Shouldn’t it say ‘Men’s Bogs’? 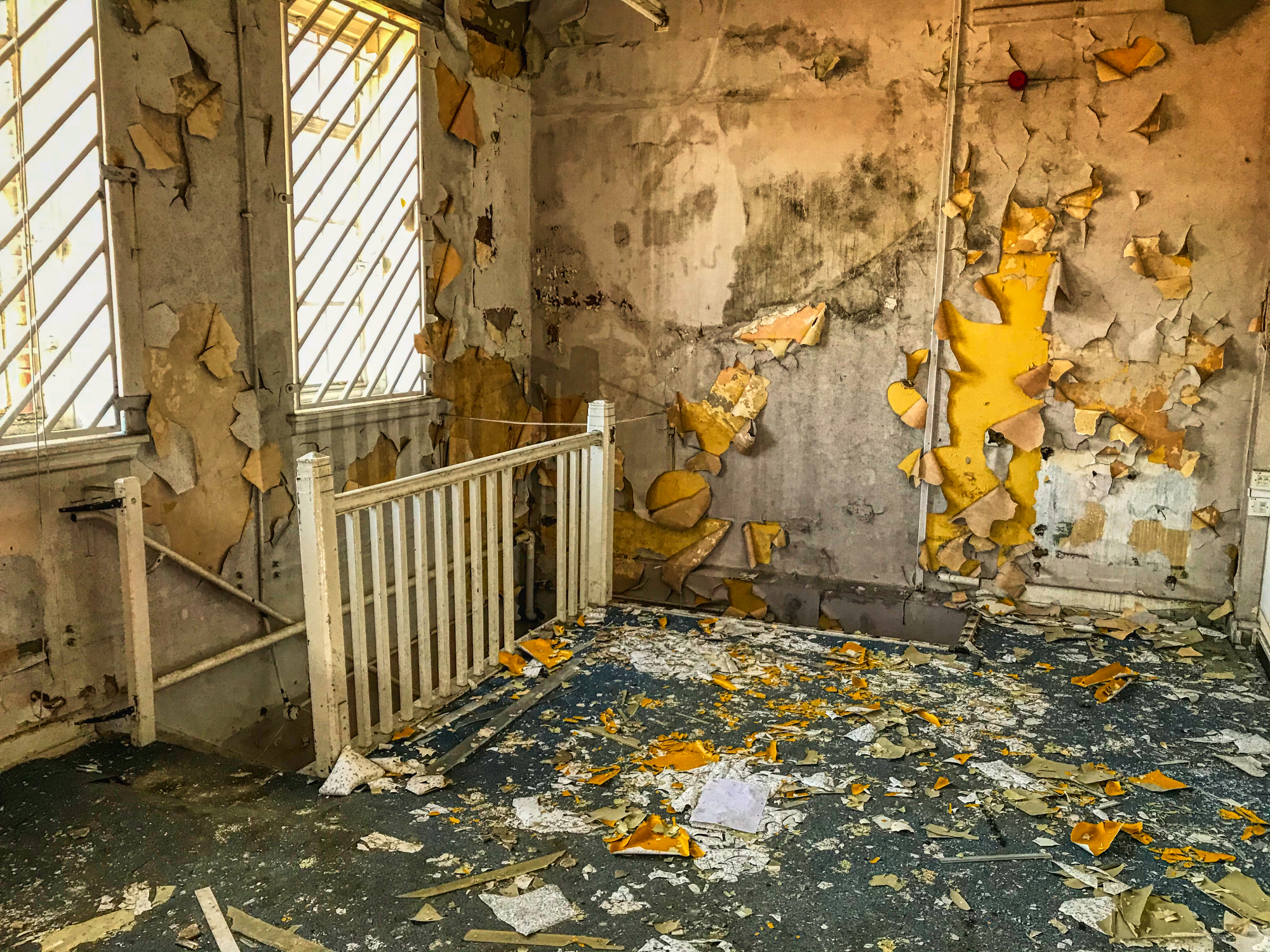 Down these steps was a large walk-in safe. I couldn't walk down due to the sheer amount of junk in the way. 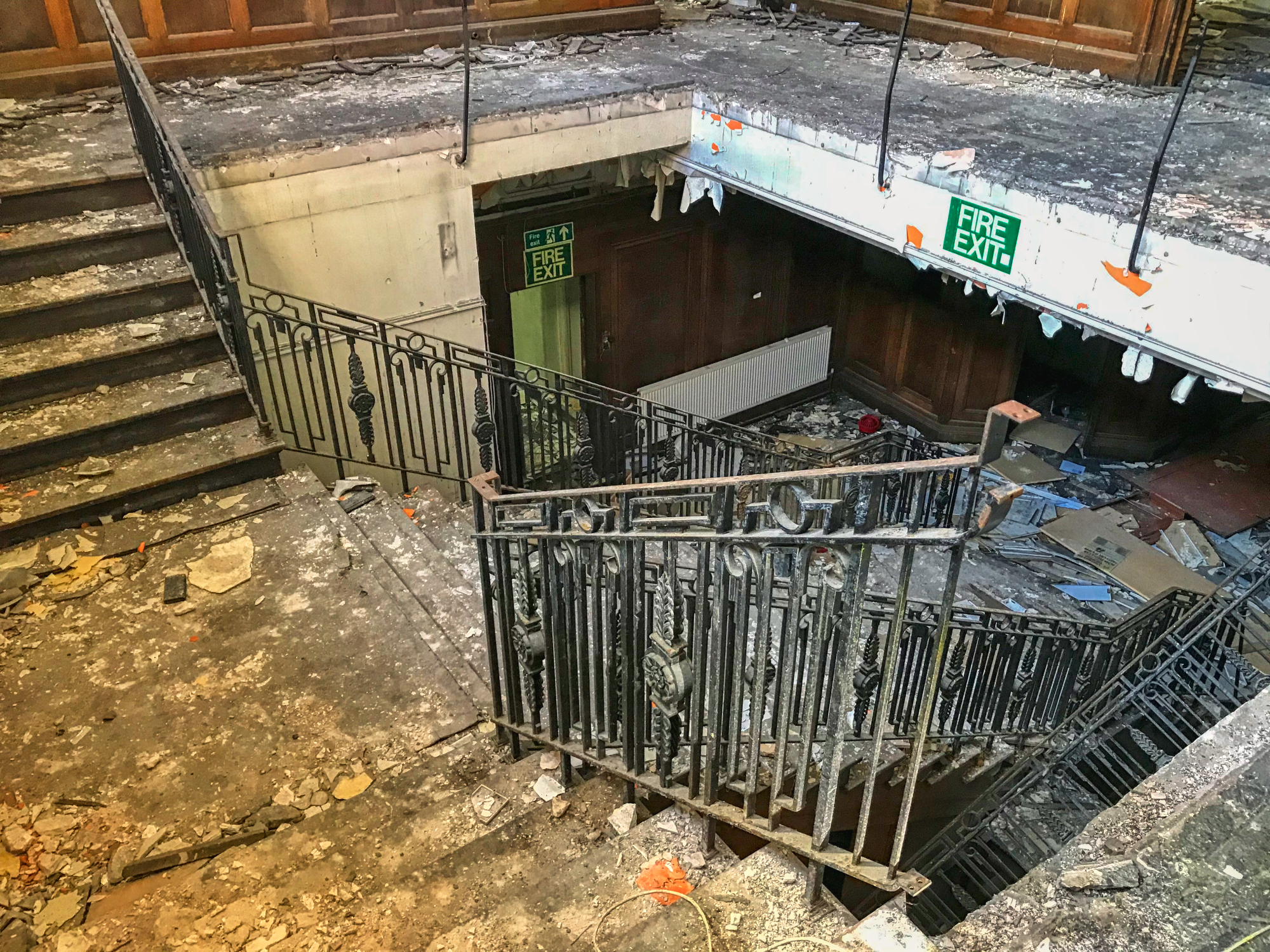 It is recommended that you don’t use the banister when mounting the stairs in Pendleton House. 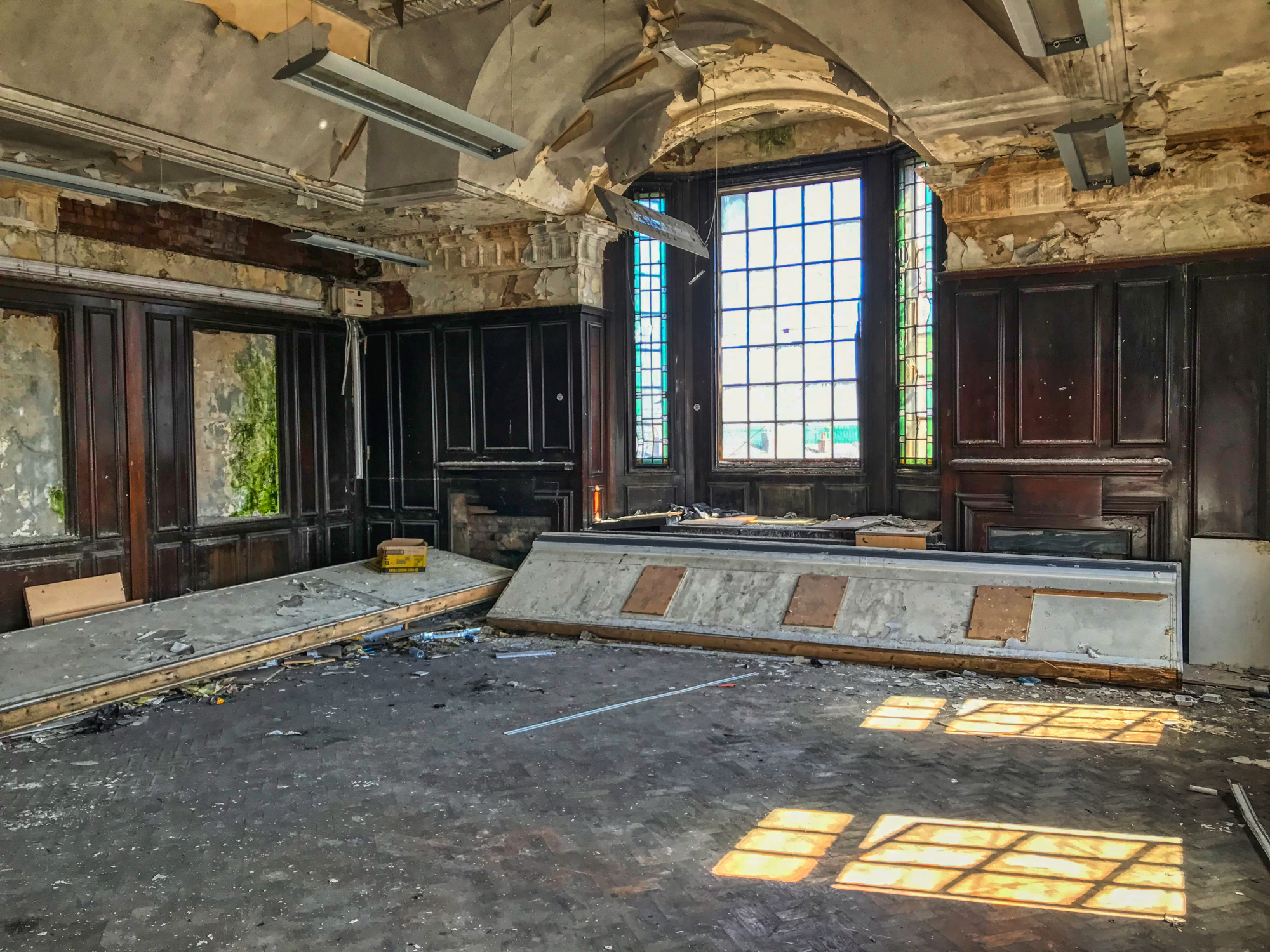 This slightly more elegant room I guess was where the court used to be. Some nice wooden panelling was left that has not yet been smashed. 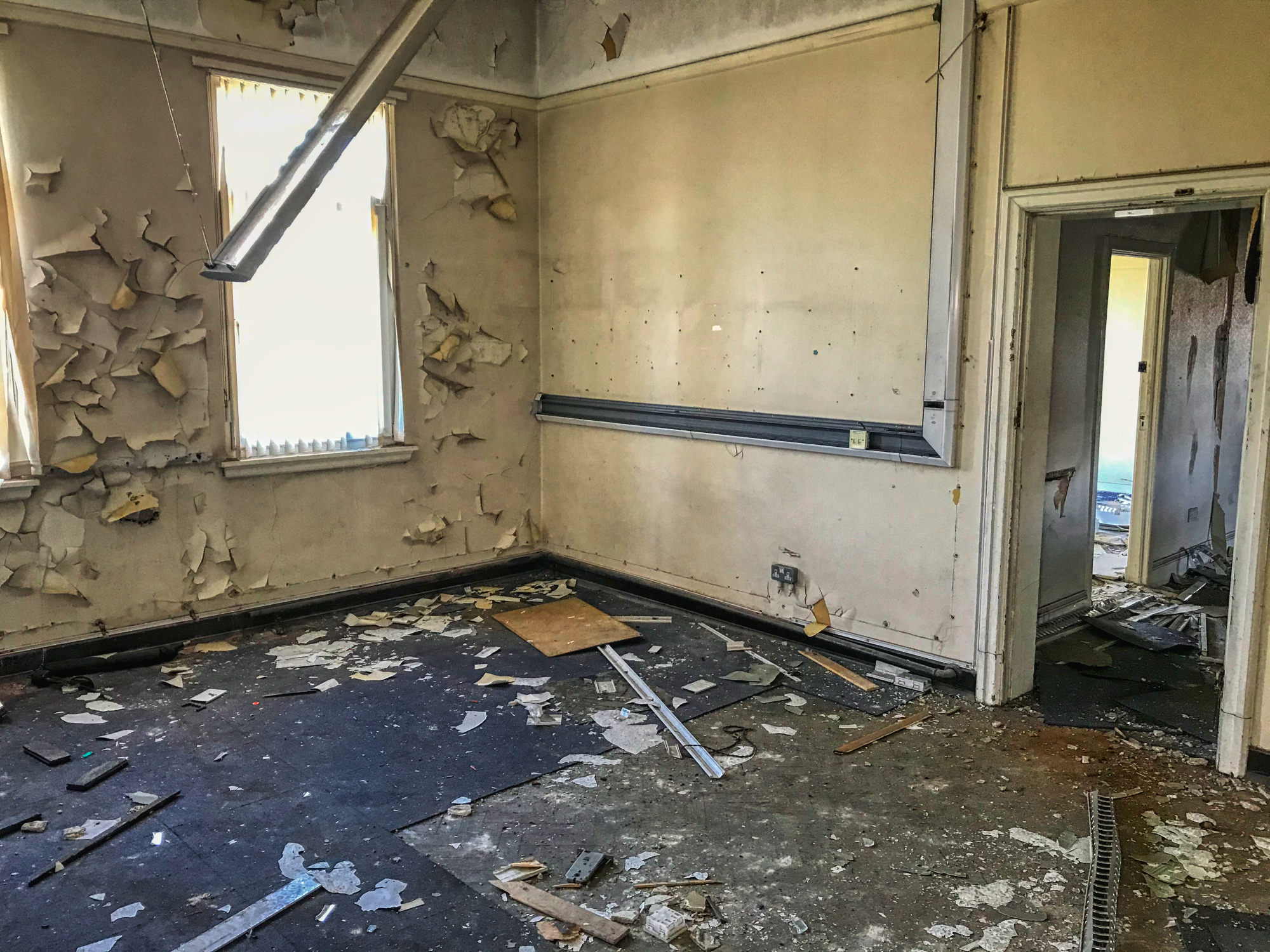 Otherwise, it was room after room of stark emptiness. 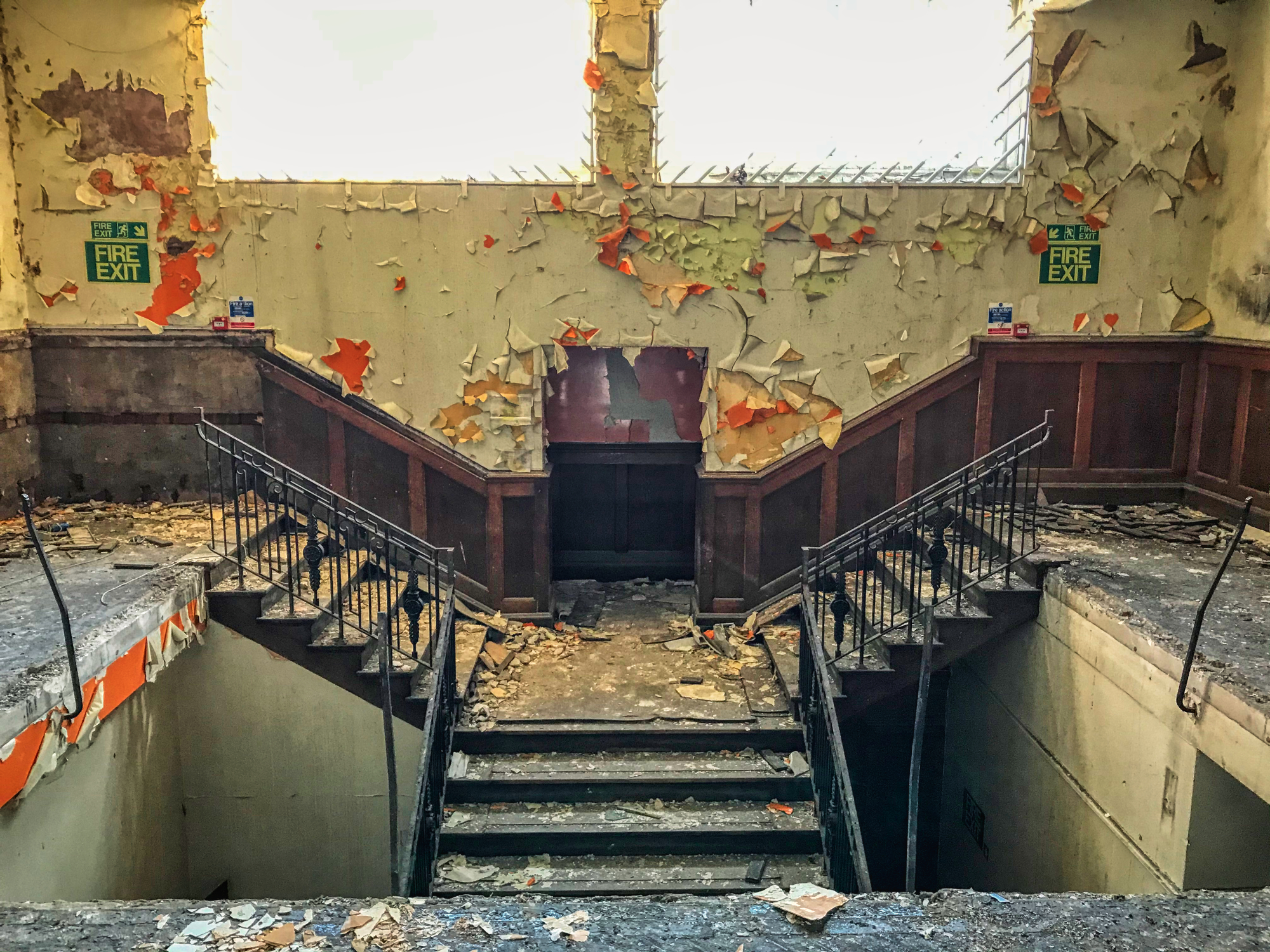 One should not get too close to the edge; there are no longer health and safety precautions in Pendleton House. 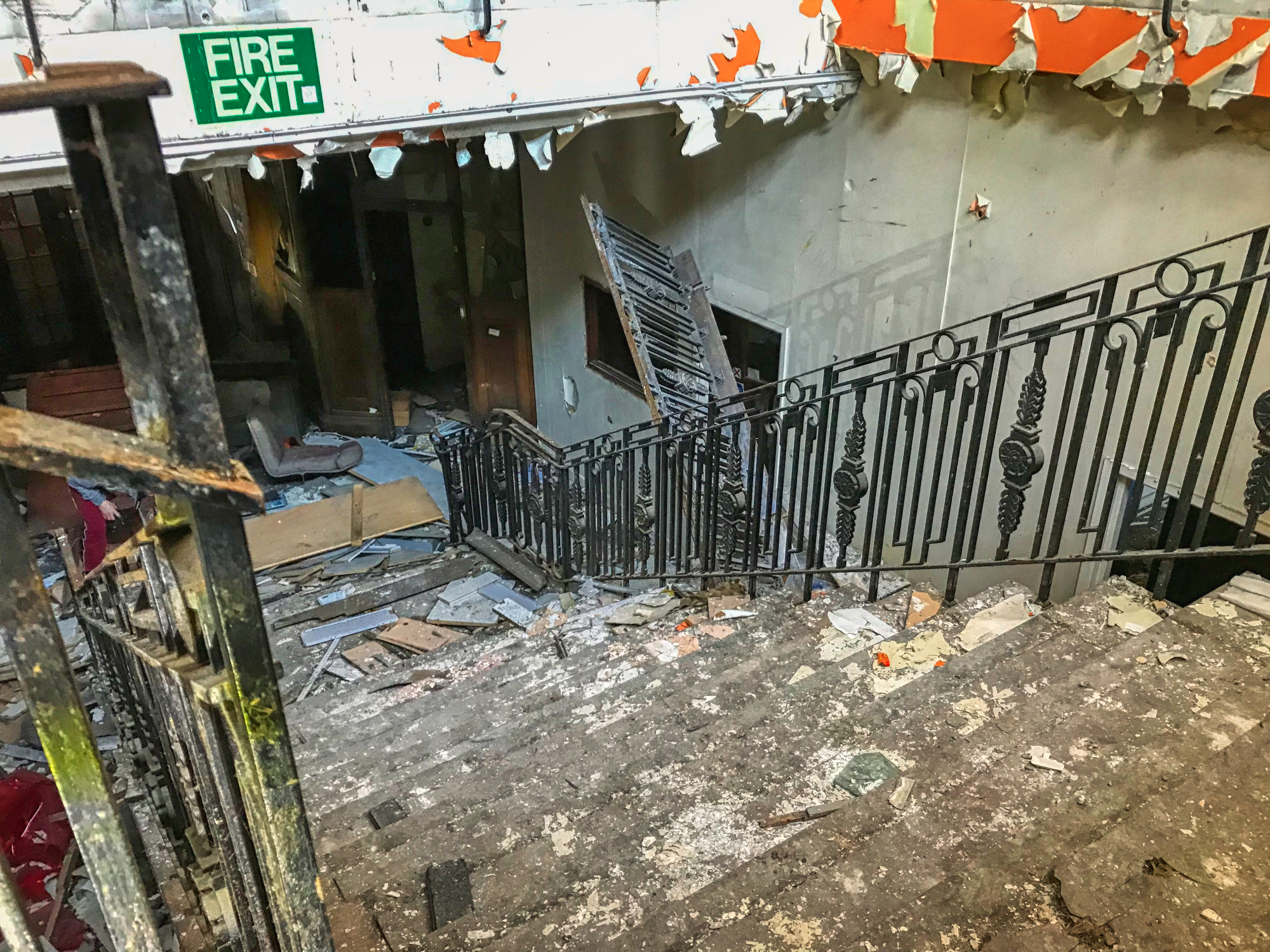 Although the paper looks like it's blood-splattered, I have not heard any rumours of stabbings within the building. Someone had been freaking out with the tin of Ant Killer. 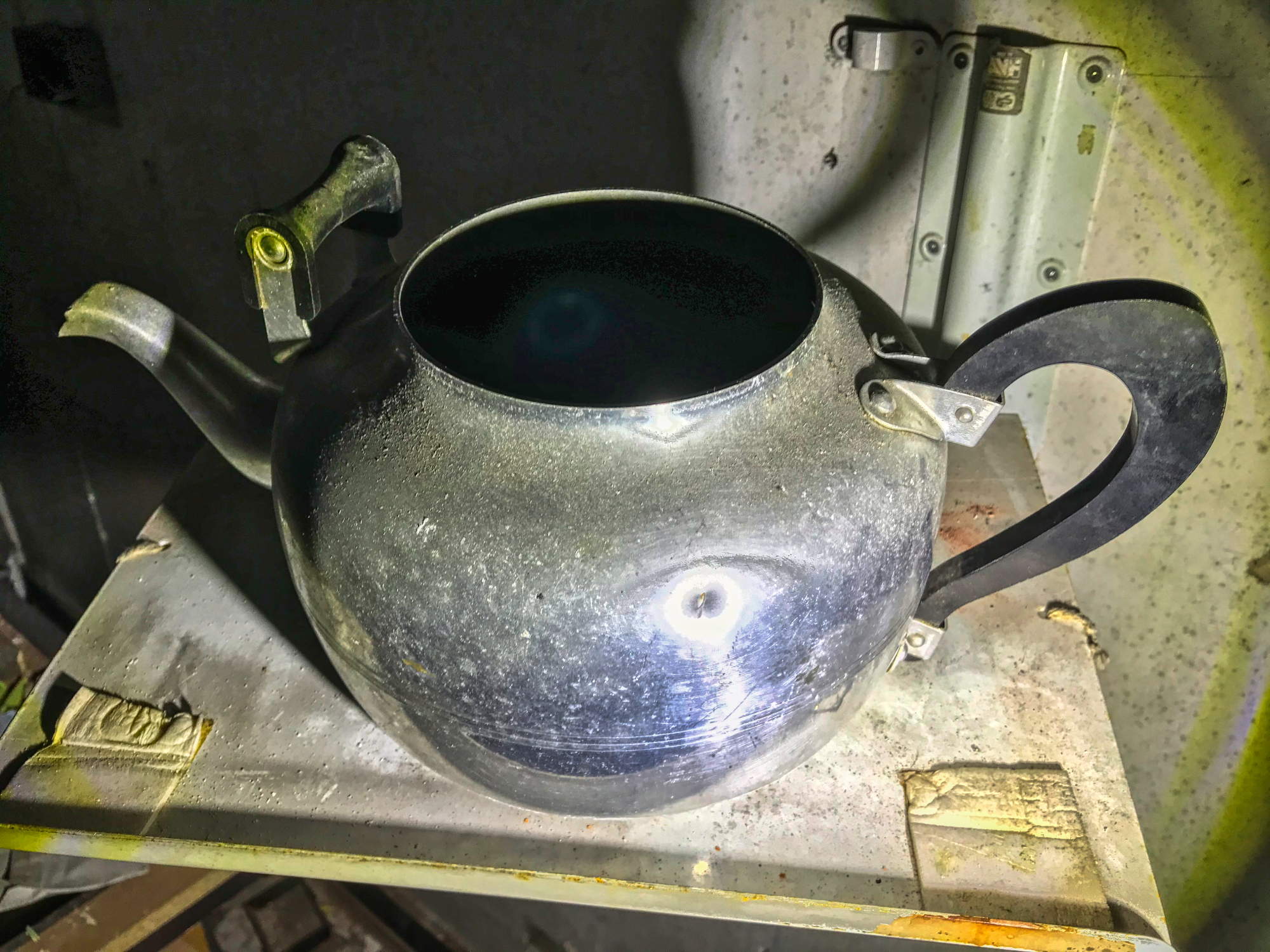 A very well-used teapot complete with dinks. We English love our tea. P. Swindells had 23 days annual leave. That was quite normal in the late nineties. Now, permanent employees have around 30-35 days a year.

Filling out a paper form is quite dated, we did have computers, Excel, and IT in 1997. 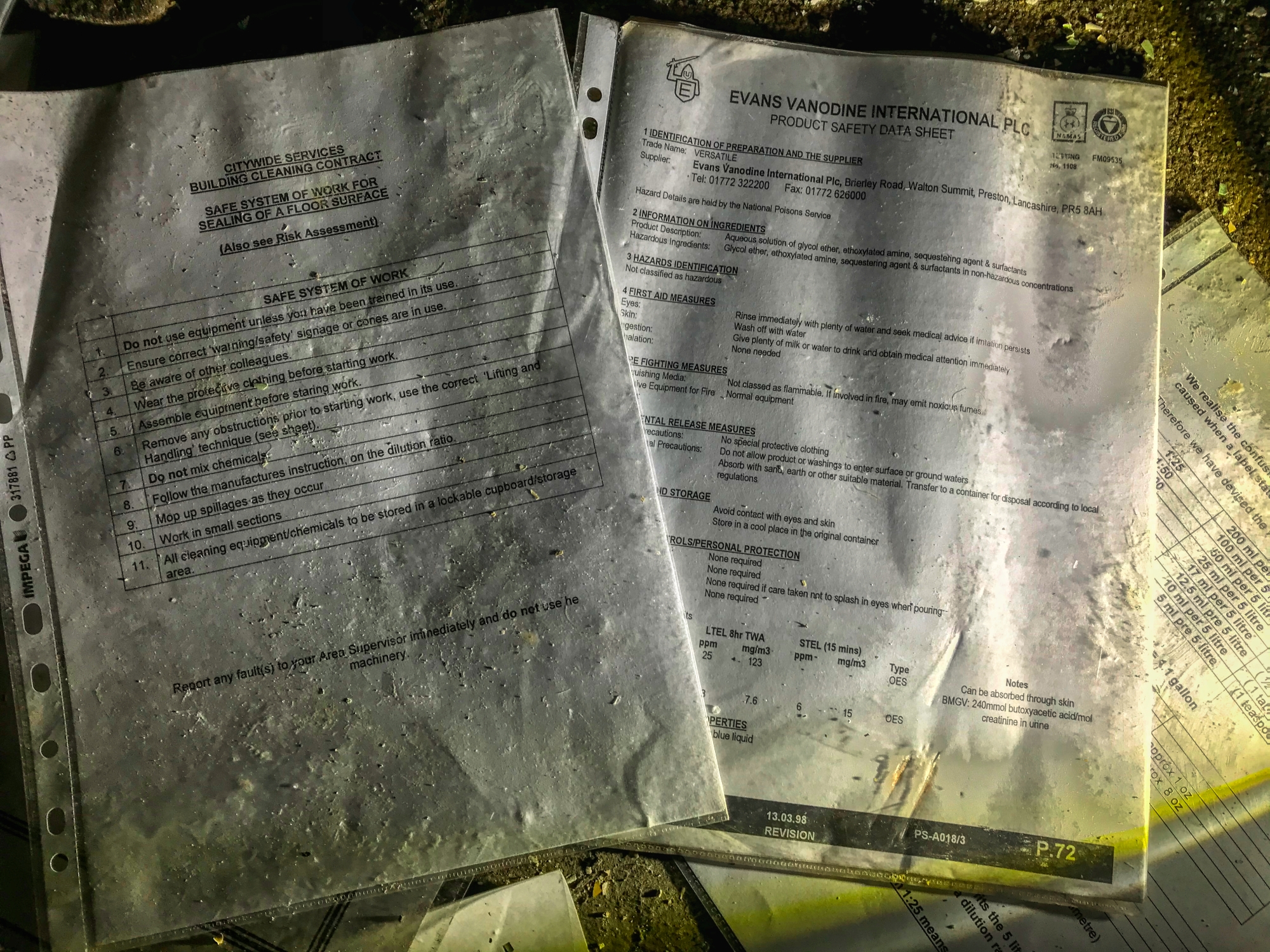 A long time ago, there was some form of cleaning. Today’s picture is what happens when you fail to pay them. The few items of the past left behind in Pendleton House could have been the memories of past employees and their families. 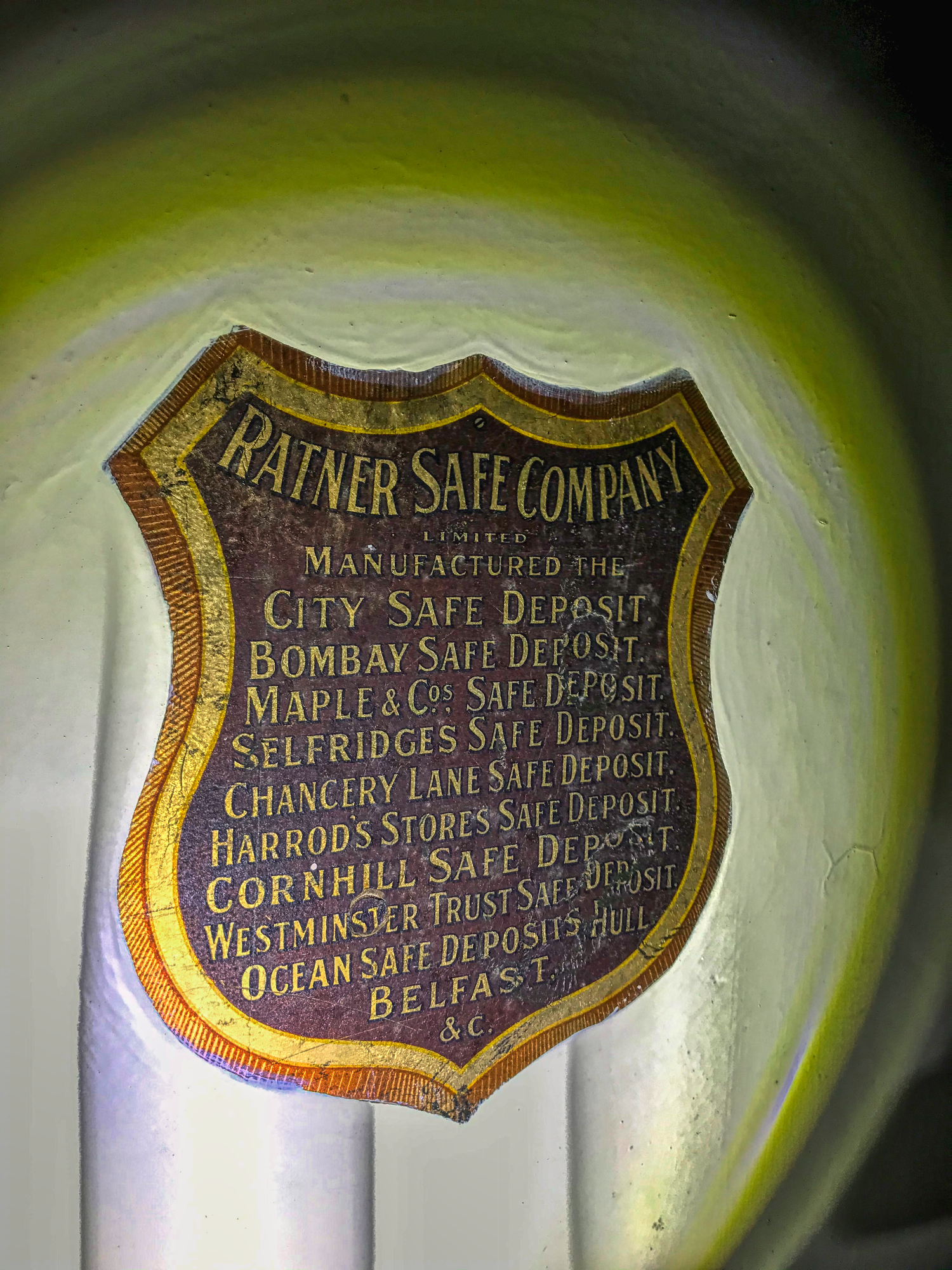 Ratners Safe Company has made a few others during their lifetime, some quite famous. Suffice to say, the staff entrance was not available to us, and we needed to use a ‘different entrance’.

The building does not appear to be Grade listed and I can see it coming down in the next few decades when the local councillors get around to discussing the demolition again. I can picture the conversation.

'Pendleton House... again? Oh… surely we can do that tomorrow, another cup of tea Derek, how about a nice slice of cake Marge?'' 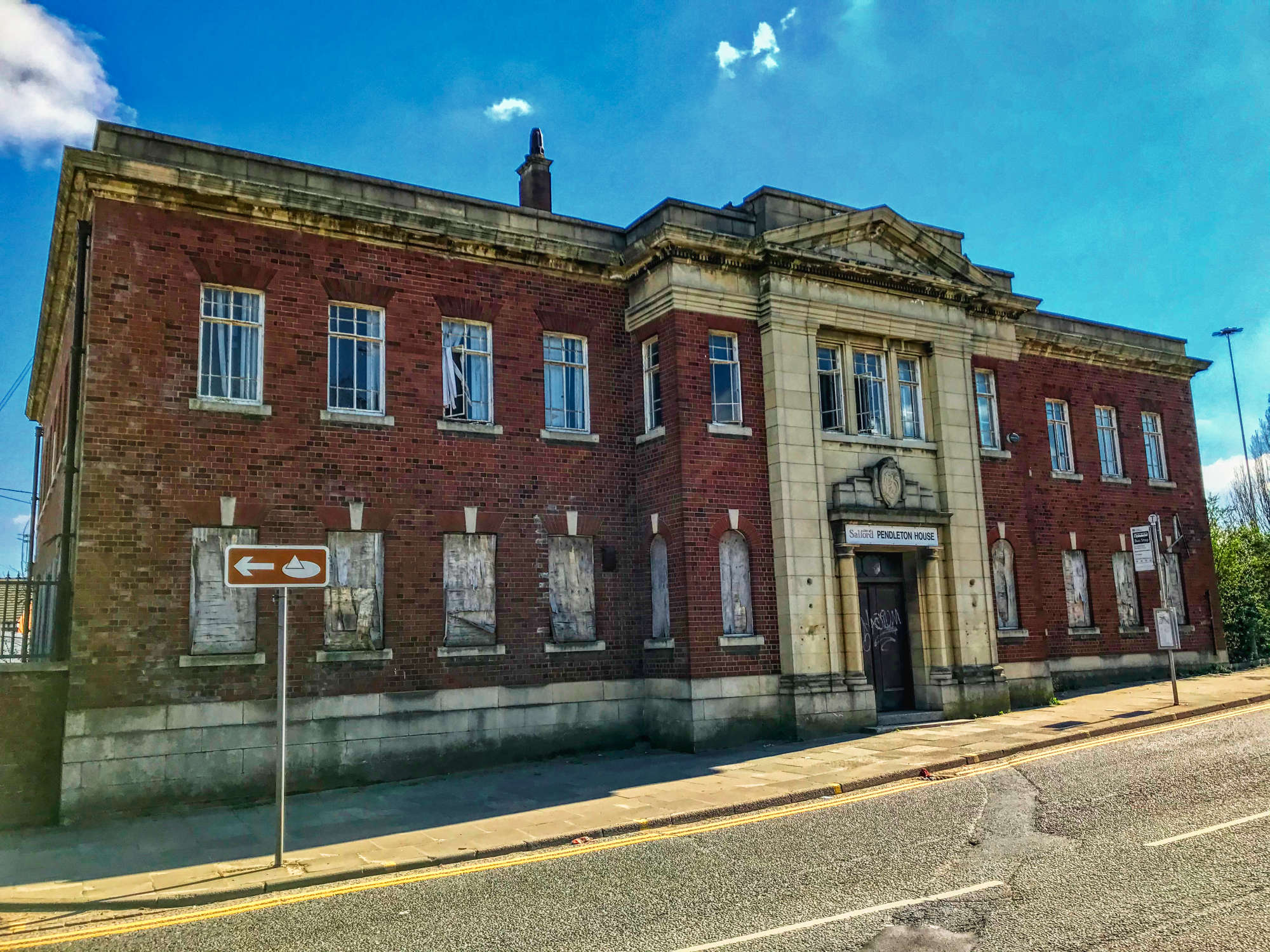 It was very grand indeed though, that is exactly the property that turns into Flats up here. The problem is, they keep the facade then make the same old homogenous new build insides

Oh, I'm not too fussy, you should see some of the gems I have coming up. Not even a cool staircase in sight!

It will be overpriced flats, it's central and desirable.

The world needs more grand staircases. I worked for a global accountancy firm once and they had a head office staffed entirely full of Tory fuckwits that I had to go down to London to work in a few times. It had the most ridiculously grand staircase ever. The whole office was a sham tho. Nothing got done there apart from poshos drinking at their desks and smoking

The gems will be gems with it without staircases! Probably without given the state of some of thee wrecks

You have witnessed their slothenly ways? I worked within the House of Parliament during the noughties. In the summer they have what they call recess before parliament is opened again.

A recess is a break during the parliamentary session (year) in which neither the House of Commons or the House of Lords meets to conduct business. There are usually several recesses throughout a session and usually include Christmas, Easter and Summer. Recess is formally known as a periodic adjournment.

It's not a short break, its most of the fucking summer and the palace is pretty much empty of MP's. A long skive is a better word for it.

Still some nice paperwork to read though

I struggled to find any, you know what it's like. Bugger all or wayyyyyy too much!

We are never happy 😂

What a weird headline. What? Glad you finally found your way into another house, maybe this one was so easy to counterbalance your struggles in the previous trip.

Had a great day yesterday, and managed 7. Yes, things are looking up again. This visit was in April.., 2 months ago.

I just can't get over the grand potential of some of the buildings you explore. How they can be left to just fall apart saddens me.

Some are grander than others! There are strict laws here about demolition and refurbishment of buildings. It works in my favour.

Hiya, @LivingUKTaiwan here, just swinging by to let you know that this post made it into our Honorable Mentions in Daily Travel Digest #1227.

That would definitely be luxury flats by now if that was around here. Does Manchester still have more living accommodation than it needs? Or are there fewer backhanders Up North? 😂

The council could be lazy bastards and haven't given the developer the go-ahead yet. Who knows?

That's a good chunk of money to just ignore it, what are they doing over there, printing at leisure?

I haven't looked at an abandoned building the same since we met.

It happens a lot 'up north'. It's not London here, and so the properties are not quite so hot.

Man, that sucks. So much potential. It looks like it was probably a really beautiful building at one point. That staircase is like the stuff you see in movies!

It was the staircase I saw and noticed in some others' posts. Definitely the highlight of an otherwise quite boring derp.