Tales of the Urban Explorer: Monsoon

slobberchops in Urban Exploration • 3 months ago

I can't think of a single redeeming favourable aspect of the former Monsoon Restaurant and Take-away.

Having looked hard on the internet, I can see it is registered on a few websites as an 'Indian Restaurant' but does not have an entry in Trip Advisor or a single review of the food anywhere. 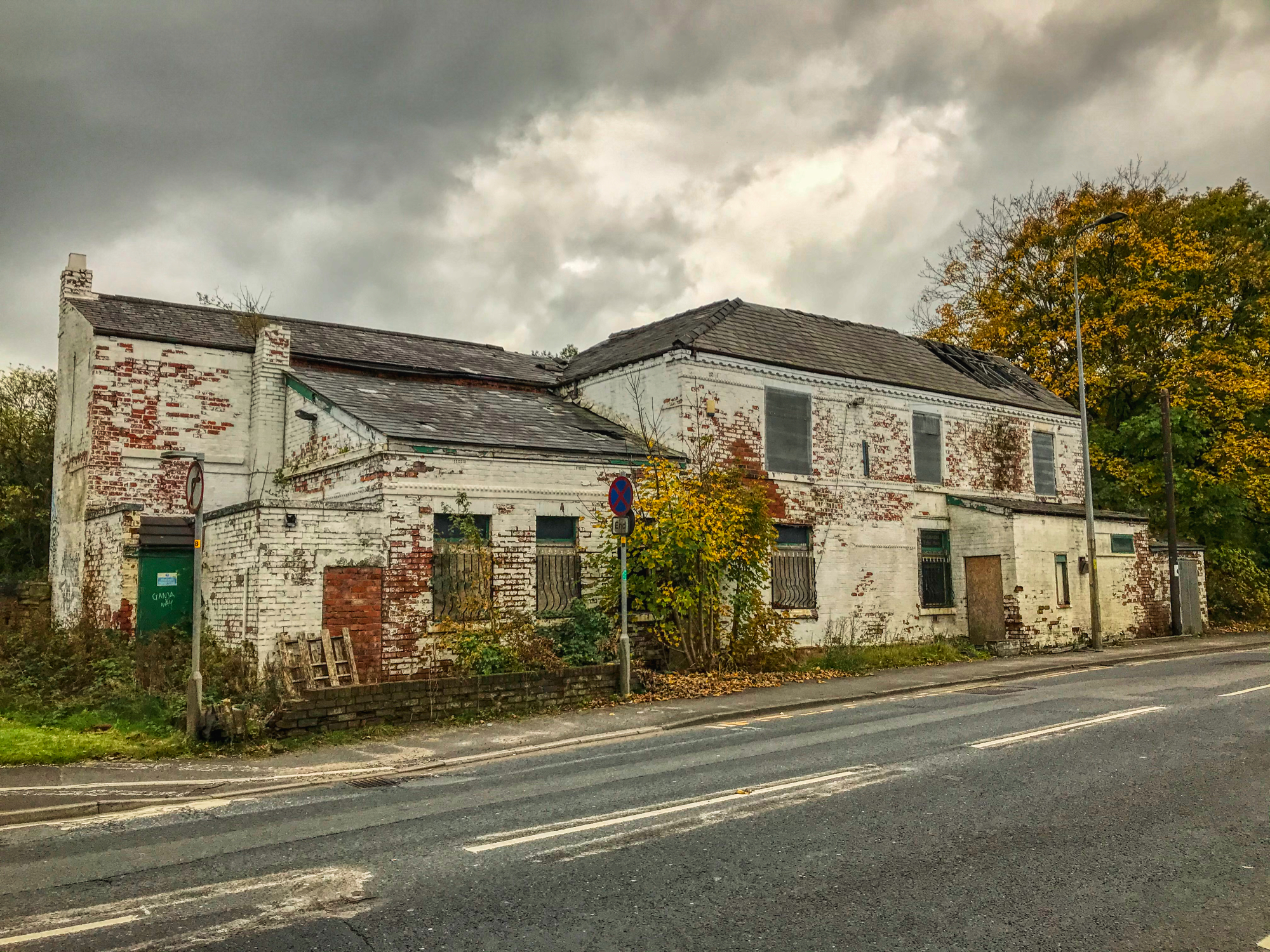 How can any eatery NOT be registered on Trip Advisor? I'm wondering if Monsoon ever dished out the Peshwari Nans or Chicken Vindaloos.

Couple this with no car park (I had to park on a nearby estate), which would seriously piss off the nearby residents and you have a recipe for disaster. ... and then locate your food business right next to a stinky canal and you gain free tasty rodents mixed into that Indian cuisine to generate a different 'unique' kind of spice.

The only mention of Monsoon is here. Being in the top ten eyesores is hardly a prestigious title to gain. 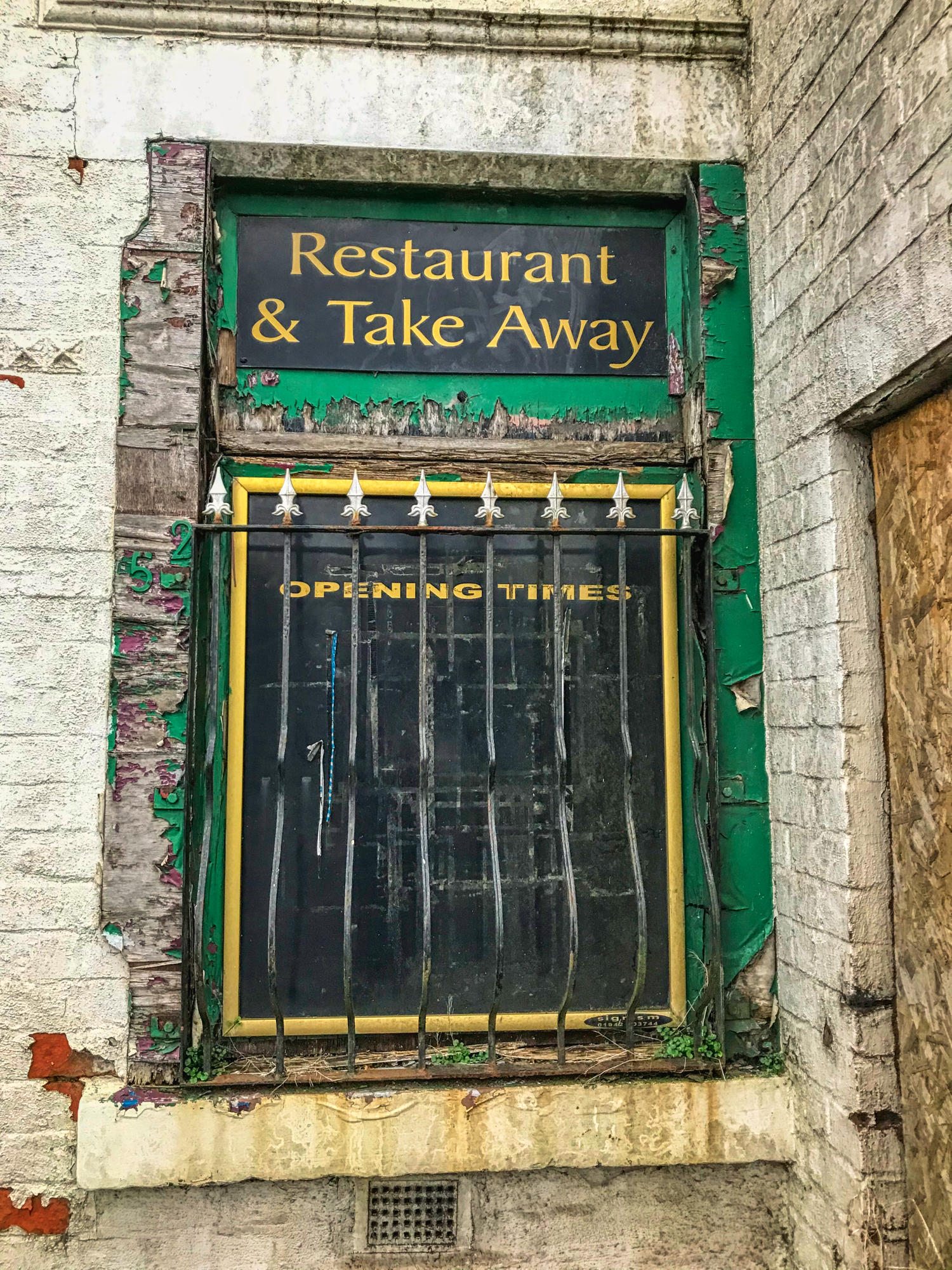 It was getting late and we needed something to see the day out that was not named 'fail' and Monsoon had been handed to me as a bad place, but go have a look anyway. A fat bloke was arsing around the near entrance and so we had to wait him out. Was he expecting a festering kebab to come sailing through the window or something?

Surely he wasn’t an explorer? FFS… after waiting a few minutes fatty waddled off re-joining the canal and we jogged across the road, climbing into the very obvious access point awaiting us. 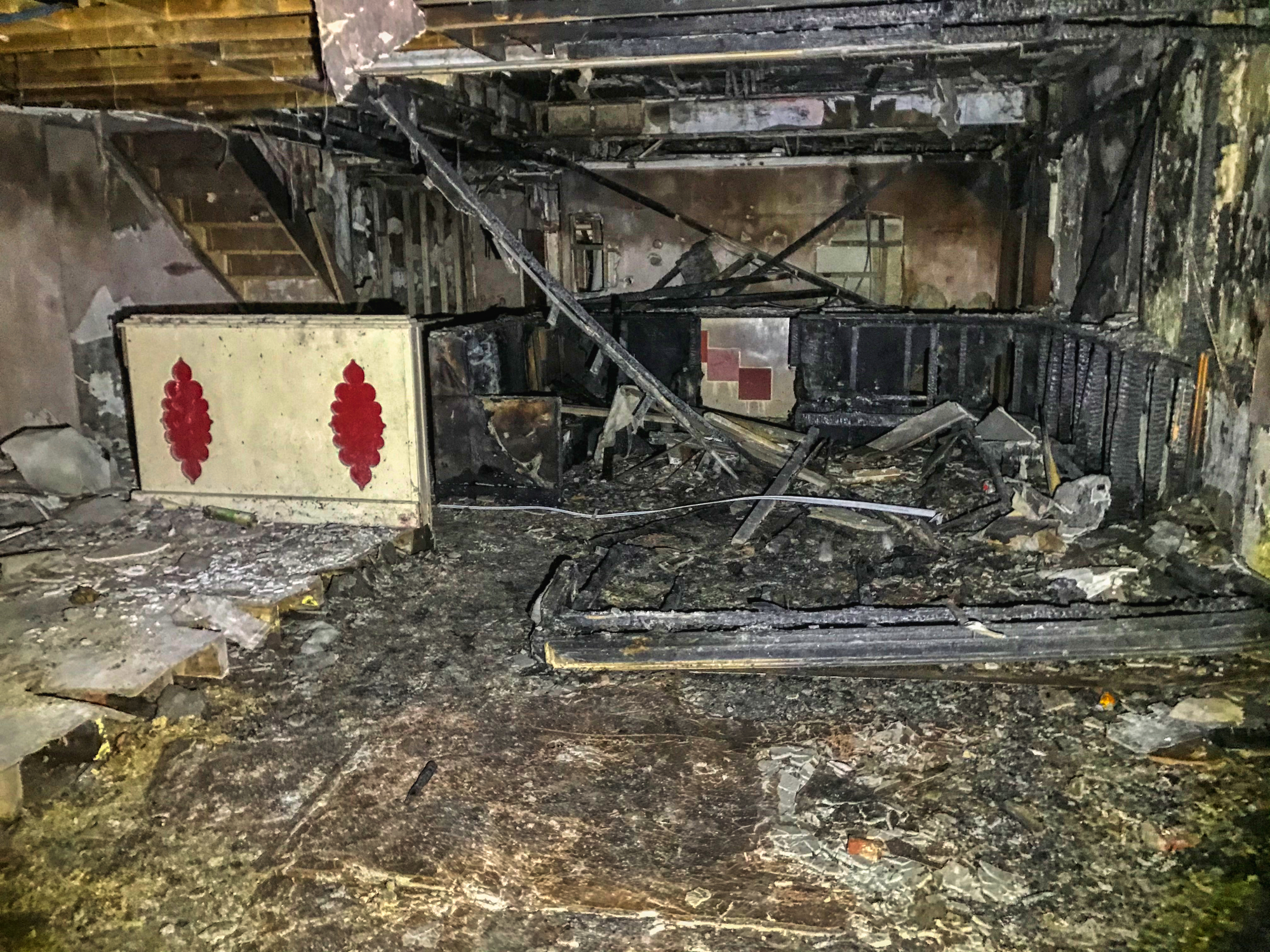 Despite zero reports on the fate of Monsoon, it was very evident that fire had swept through the property at some point in time.

I am guessing that used to be the bar, and those diamond-shaped red things were part of the décor. I would say there are in the correct Indian vein and style.

The interior was much smaller than it looked from the outside. I am sure some was not blocked off from the inside; a curious phenomenon. Was this once the kitchen? The tiles kind of indicate it to be so. 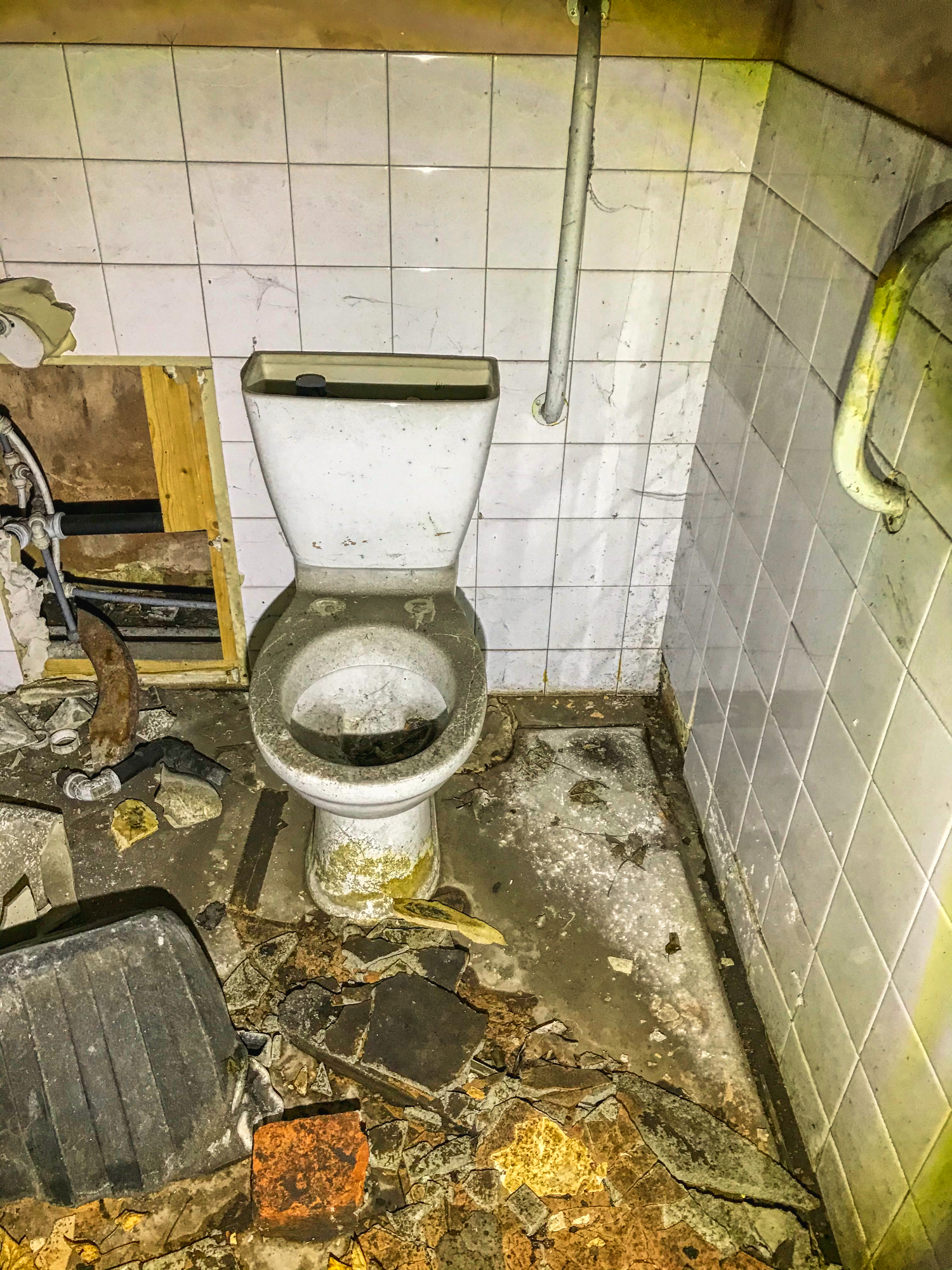 It’s a poor state of affairs when the shitter is one of the better views inside. With the ceiling collapsing in some areas, walking around proved a little hazardous. 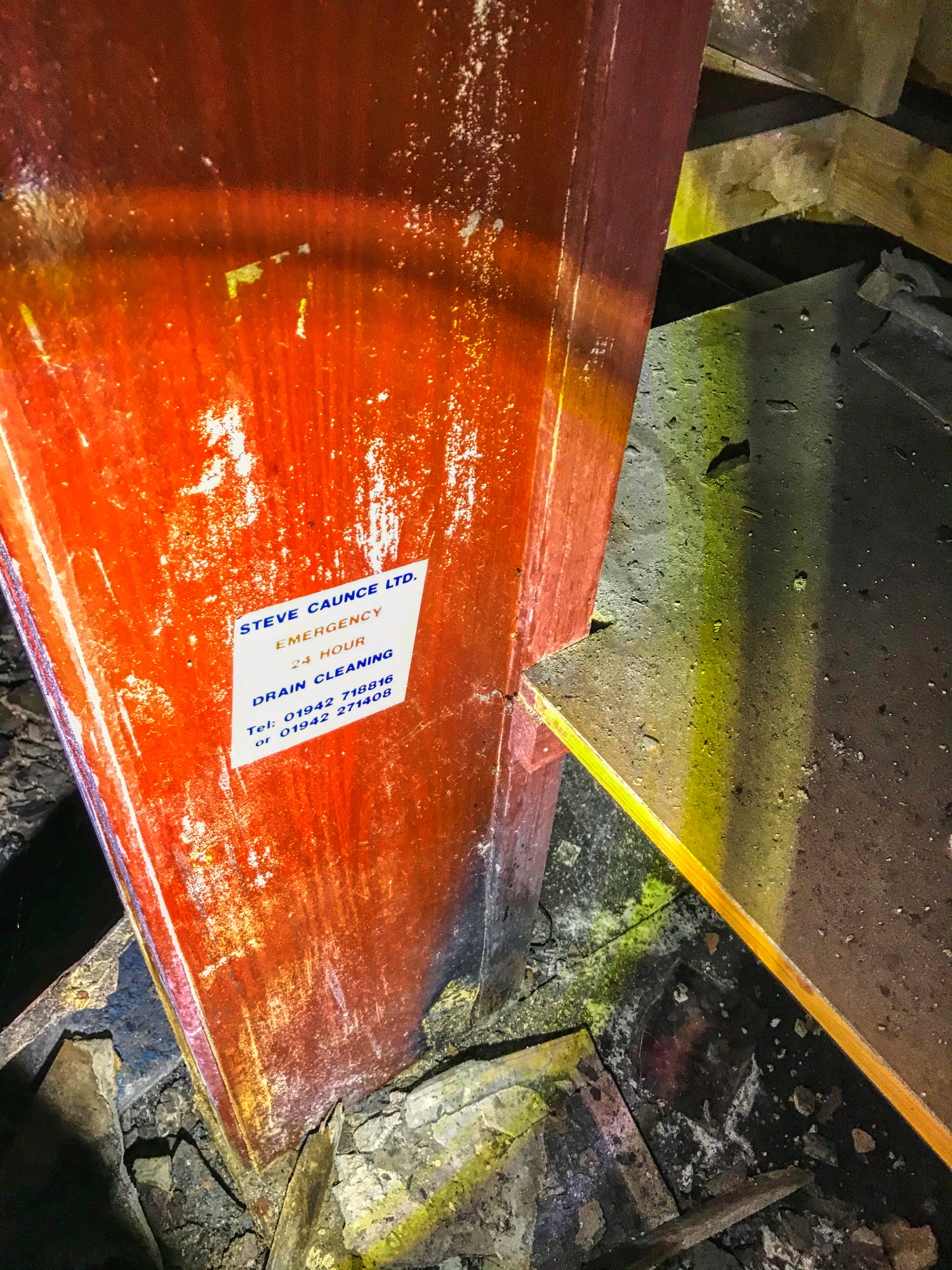 Were the drains infested with rat droppings? Just call Steve and he will fix everything for a price. This has to be one of the crappiest explores I have done to date. I only post this to warn you NOT to go and waste your time. 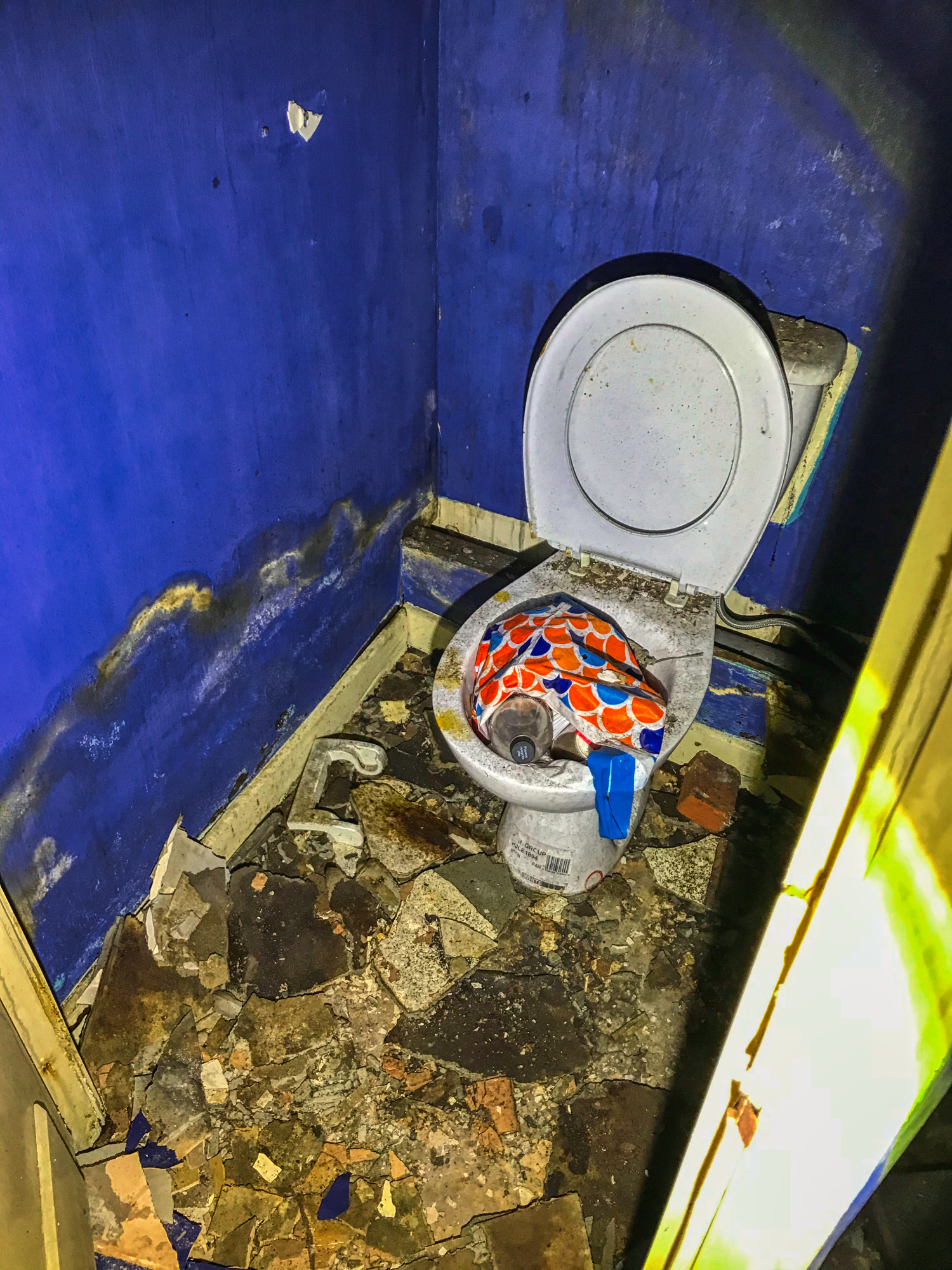 The diamond décor was all that was left. It looks like a corridor the waiters would walk through to serve the punters. 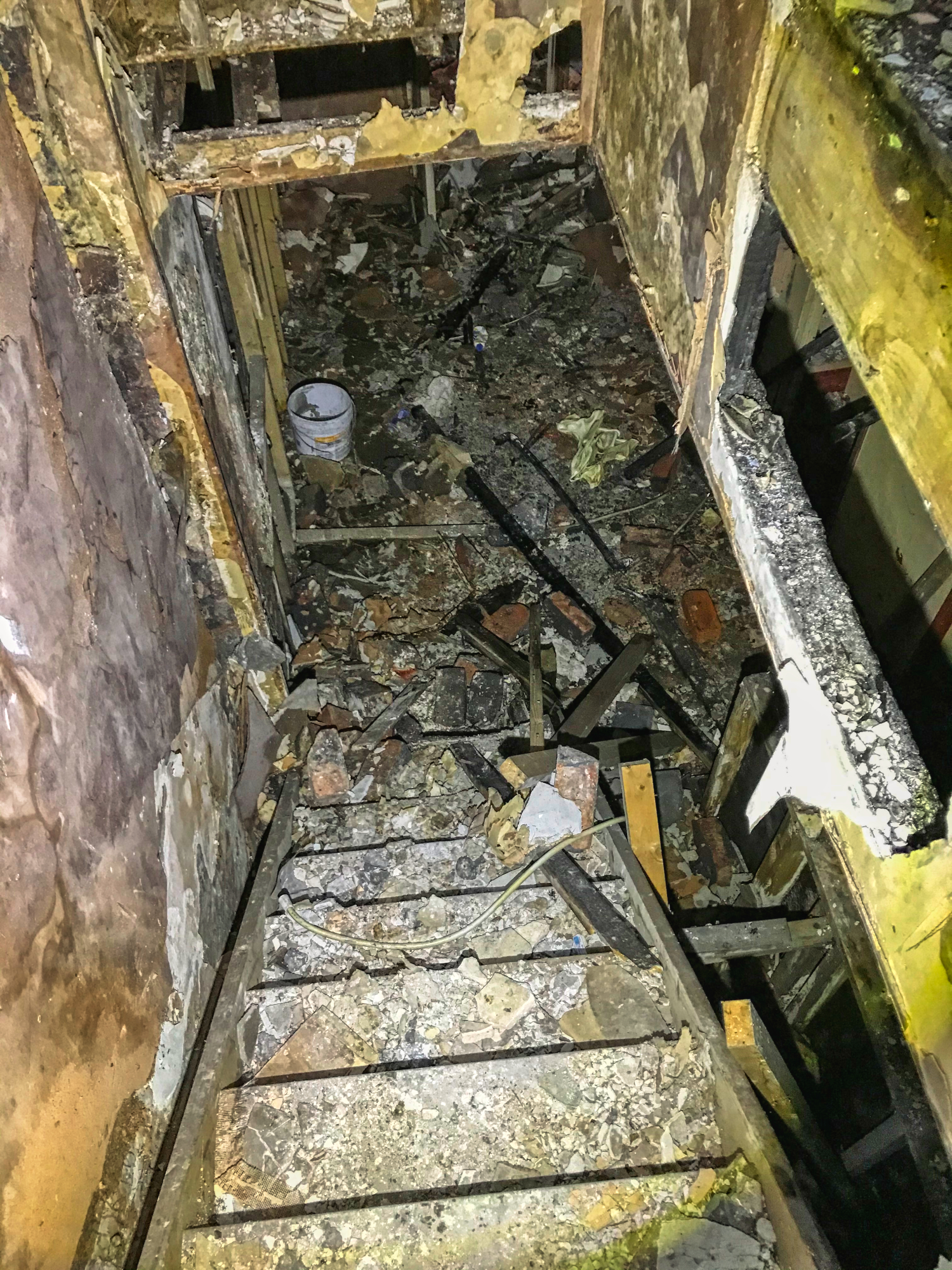 Amazingly the stairs were intact, though quite ropey. Going up there was a little sketchy. The view from the top of the stairs was as good as it gets. Everything up there was in a similar state, burnt mostly beyond recognition 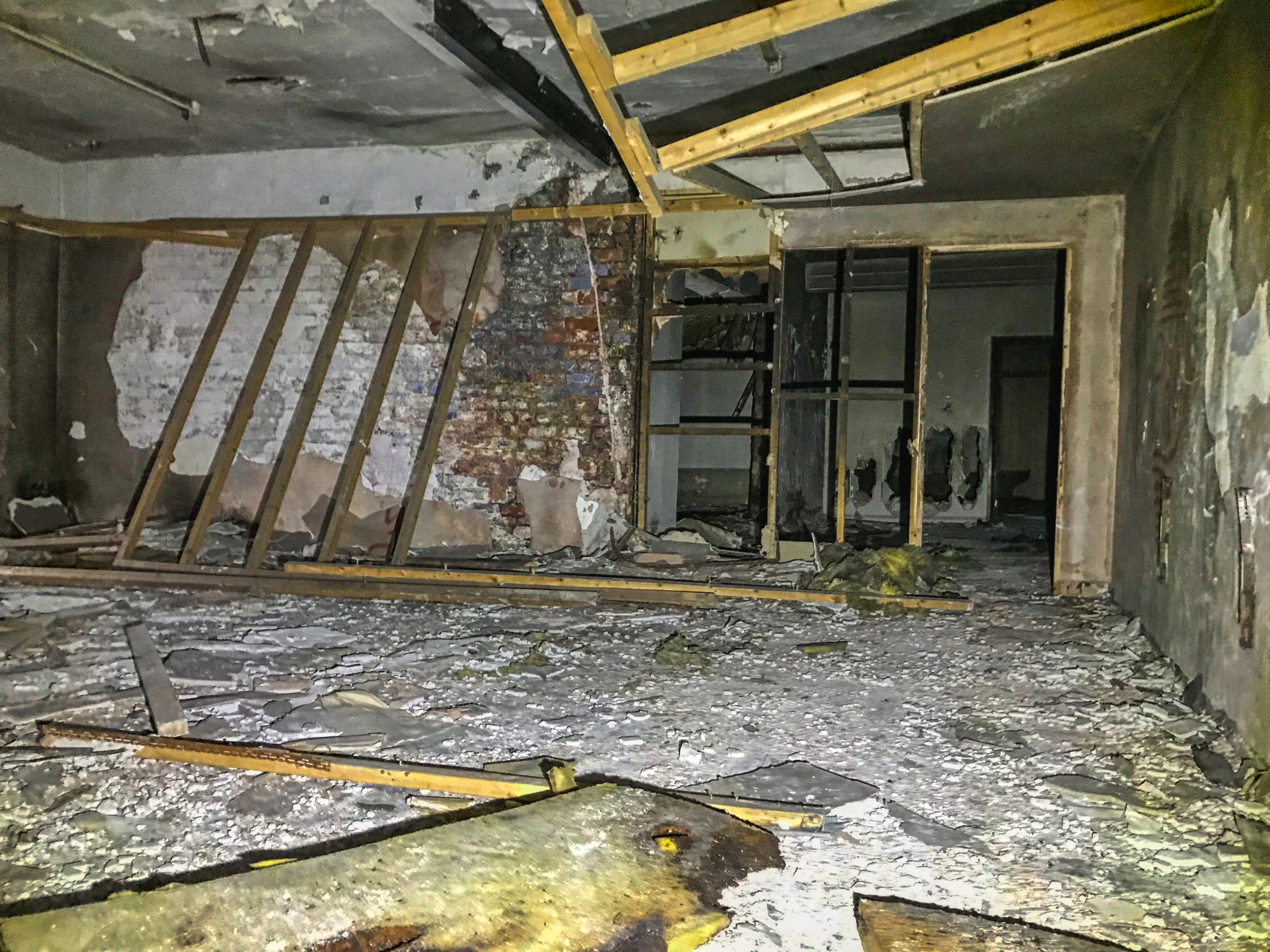 'Jimmy' is more daring than me to go over there and sign his autograph on the wall. The upper floors looked as safe as walking on plasterboard. 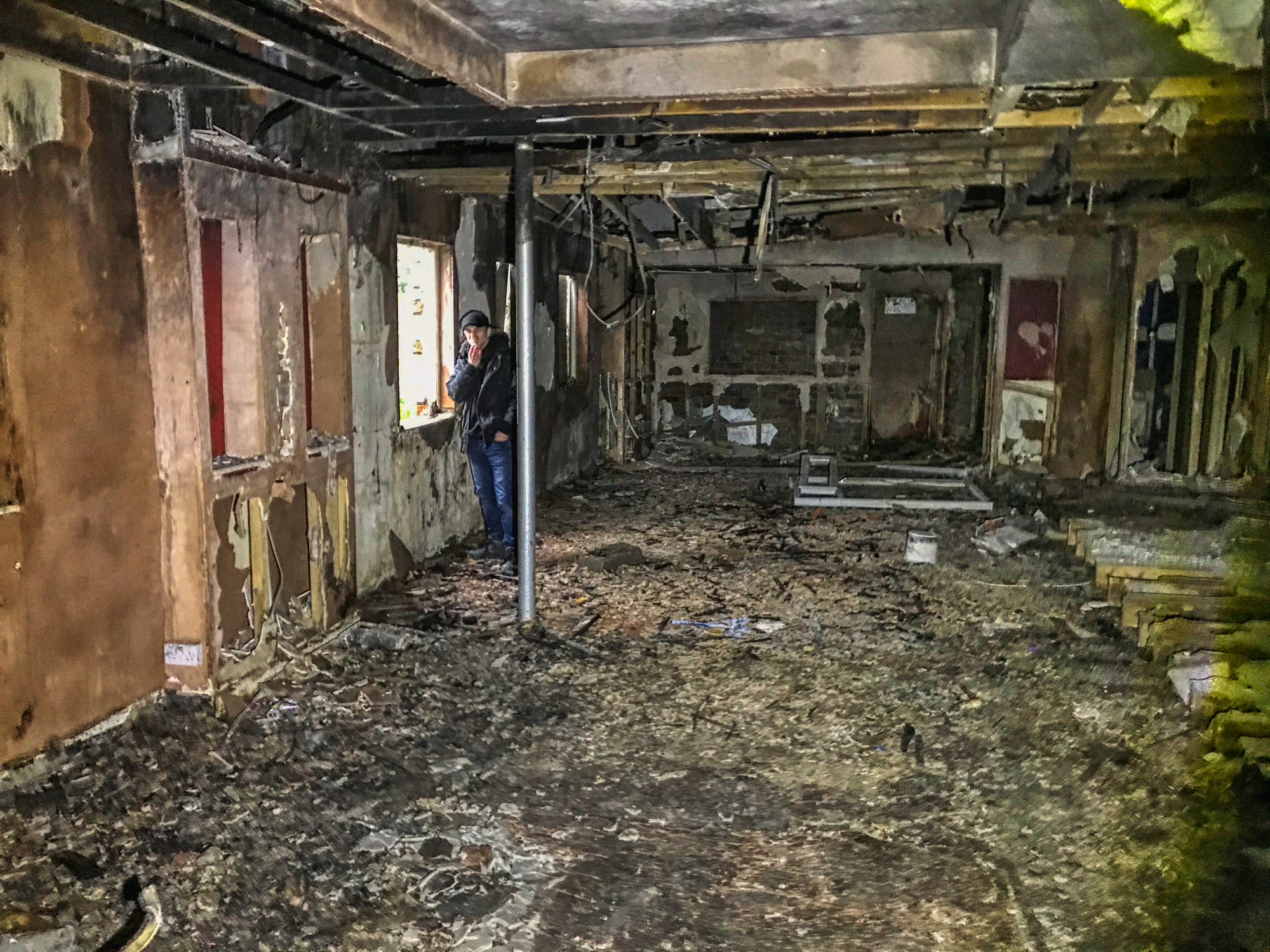 It was time to leave and a partnership of legacy of exploring would now be concluding. This was the very last exploration we collaboratively did in October 2020, and what a shithole to finish our partnership.

That last batch of vindaloo must have tipped beyond acceptable heat and into open flame.

Indian cuisine isn't a thing here. Must be a remnant of imperialism over on your side of the pond? Or maybe I just don't live near a large enough city.

Must be a remnant of imperialism over on your side of the pond?

It is.., curry is extremely popular in England, and somewhat adapted as a national dish. It also goes hand in hand with drinking far too many beers, walking in pissed, ordering the hottest curry you can find, followed by barfing all over the pavement. An unfortunate connection.

Fire and damp do not make good bedfellows. I wonder if it looked much better before the blaze, lol

There's an image in that link, Worst Eyesores in Wigan.. but it looks just the same + some scaffolding. The place is a mystery.. with very little to find concerning history.

We drove past it yesterday and nothing has changed. Same access point which is viewable from a distance is still there.

Yeah, it would need some major work if they wanted to turn it into something. Start from scratch is the only way!

When I worked for an architect's office, one of my jobs involved slogging through a smoke-damaged chinese restaurant that was to be remodeled to replace the bar that had burned down next door. It was arson, if memory serves. I should see if I still have any photos, because that was grim, and the damage was all superficial. The caked kitchen grease, had it caught fire, would have ensured total loss of that structure, too.

Arson is a popular fate of many a business. It's a shame that many feel the need to try and get their money back any way possible if it all goes Pete Tong

It’s a poor state of affairs when the shitter is one of the better views inside.

This made me laugh. I was waiting for a caption like "presumably this was the toilet" to follow the previous ones, but you did me proud 😁.

Do you think the fire was an insurance job?

I keep meaning to put aside these images for a 'Derelict Toilet's of the North Volume II', but in these desperate times of bad derp exploring.. I need all I can get for my main brand!

Do you think the fire was an insurance job?

It's possible.., someone did not do their homework in terms of location and audience and just down the road is Shanghai Palace which fared hardly better. Maybe people in Wigan are all hermits and never go out?

I keep meaning to put aside these images for a 'Derelict Toilet's of the North Volume II',

Perfect for the Christmas market. I can already see it sitting along side bestseller "Roundabouts of Great Britain".

Mind you, that toilet looks better than some in use I've seen.

Do you think I could get more than 28p for a hard-backed version?

£9.99 when it first came out on 2004.
People love anything with "toilet" in the title. "Shitter" would probably do even better. Could be Christmas book of the year.

Some of the 2x4 looks pretty clean - was it put in to hold up the roof?

There are now plenty of very large holes in the roof, but yes.. I guess it was at some point in time. There was scaffolding too, but that's now gone. They probably ran out of cash.

You must just assume that the place is going to be burned out inside by this point. I mean before you even bother going into places. That seems to be the case with most of them. If we have a gun problem in the US, the UK definitely has a matches problem!

A matches problem hehe.. a good analogy. Yes, I guess we have!

Yeah, looking from the outside I was fully expecting bottles of pre-war HP Sauce to add to my Big Mac.., so disappointed 😁

Wow, what a fantastically horrible find! I wonder if Steve the plumber has been by recently to do any fixups.

You could try giving him a call? 😀

"Hi, Steve? Steve the Plumber? Yeah, great. Say, I've got this building, it's been through a fire, some supports are missing, there are rodents everywhere and.. well.. basically it's in ruins, but there's this one toilet that was still functioning and I really need to use it, bad. Really bad. No, no I'm not going to squat in the corner, that's disgusting! Could you come by and take a look at it?"

Not one of the best places we visited buddy. I think the one we did just before this location had kinda took the shine off all the mysterious wonders of the Monsoon?? 🙈😄

Shanghai just down the road was heaps better, so long as you held your breath in the kitchen area. They are both still there, we drove past them last weekend.

I love seeing pictures of abandoned buildings, thanks for sharing.

I'll cross that off my list for the 'sights of the north' tour. At least there was some of the old decor to 'enjoy'. I expect that avoiding arson is a reason so many places are tightly sealed up. There will always be firebugs who get a thrill out of torching things.

My dad had a colleague visit from Germany once and took him for an Indian. The guy foolishly asked for the hottest they had and then had to suffer eating it to avoid losing face. I never saw the point in that. Food is to be enjoyed.

The curry thing was something I never did either, though donner kebabs were another matter. As it's meat I guess you never experienced that.

Pissed, walking the streets, eating Kebabs and singing Stranglers songs very loud. It was a long time ago, when I was a wee lad.

I used to eat meat, but don't think I ever had a donner. Never had a Big Mac either :) Plenty of times as a student I'd get takeaway on way home from the pub. Tended to be fish and chips or baked potato. Did my share of singing. Did renditions of stuff from The Wall around Coventry city centre :)

Happy days. Back then there were unlikely to be any photos to come back and haunt us.

Why has such a nice place been abondened?