slobberchops in Urban Exploration • 16 days ago

It failed to generate any interest and has been sitting in a similar state to what you see now. The last recorded activity was by a pallet, crates, and cardboard packaging manufacturers who went bust in 2002. 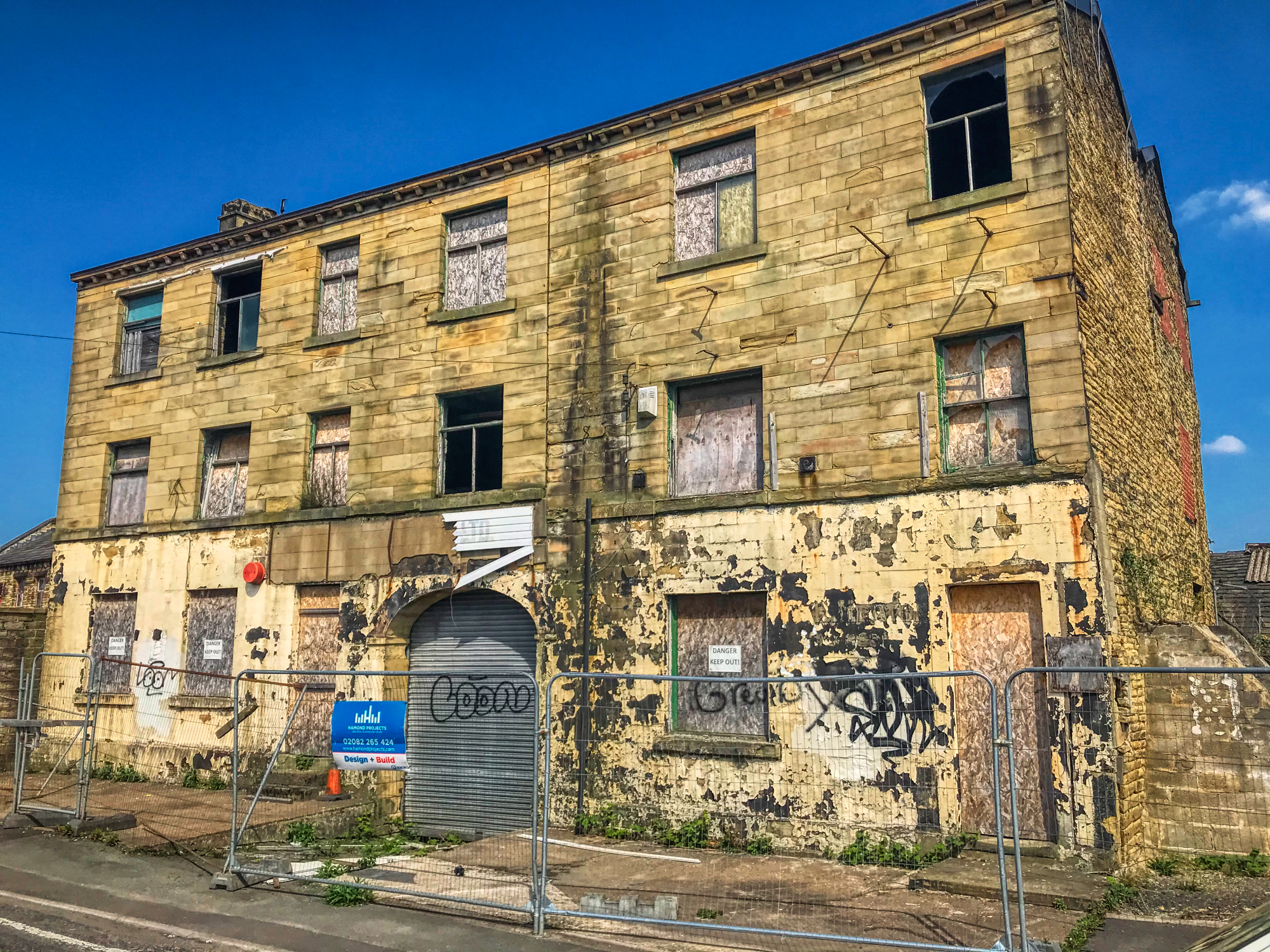 I had read a report from another explorer about Fern Mills and that it was ‘challenging to access’. Having personally met this explorer and knowing that he's a lot better climber than me, gave me little hope.

His report mentioned '"broken glass", "shimmying across a ledge", and "dropping through a window on to sodden floor".

The last part made me shudder. Never, I mean never jump blindly onto rotting wooden floors, especially upper storey ones. You are asking for injury, hospital food, and decapitated limbs.

I looked upon Fern Mills on one scorching hot day. This part of town was decrepit and almost deserted. There are some benefits to visiting shit-holes like this, one being the lack of people milling about. “There it is”, pointed @anidiotexplores who exploded into action climbing up a wall, navigating the top a little more gingerly, and disappeared over the edge in a matter of seconds.

Fucking bastard, I thought with some a degree of envy. My climbing skills are as graceful as a cat that has just been run over by a car and is about to become worm food.

I started the climb over the 9-foot high wall that admittedly had some decent footholds pausing close to the top.

Several pieces of jagged glass purposely embedded into the concrete and designed to slash your hands open glinted back at me.

After lots of grunts, groans, and swearing, I ever so slowly pulled my weary legs over to make the descent sweating like a bastard but miraculously not getting any cuts. - bloody heat 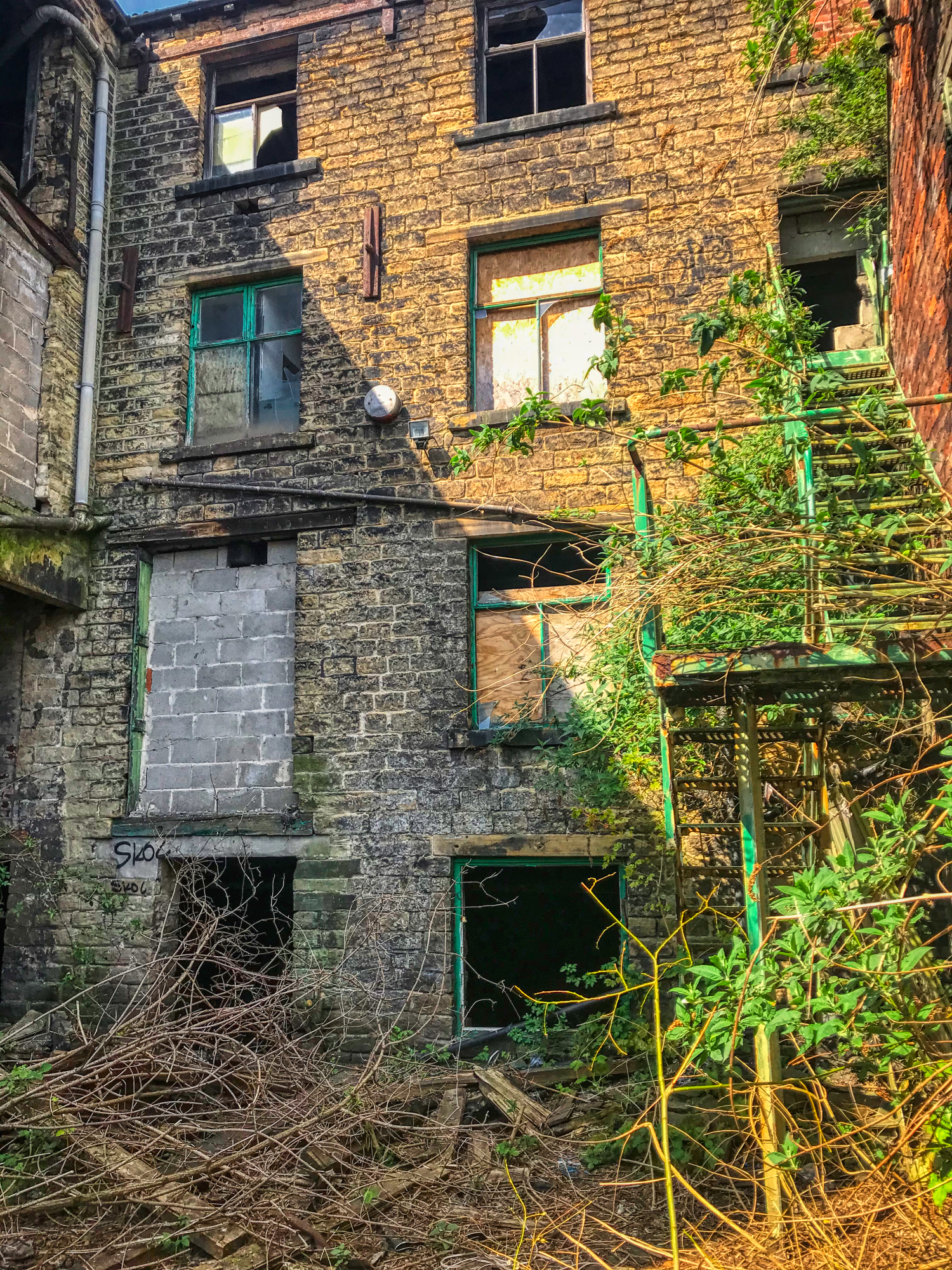 We were on the grounds and out of the eyes of the local Karen's. Could we get inside this tough nut?

It appeared things had changed as I glanced up the green metal stairway noticing a nice large hole at the top. I did need to check out the ground areas first. It seems a lot of effort to get in here for your injections. 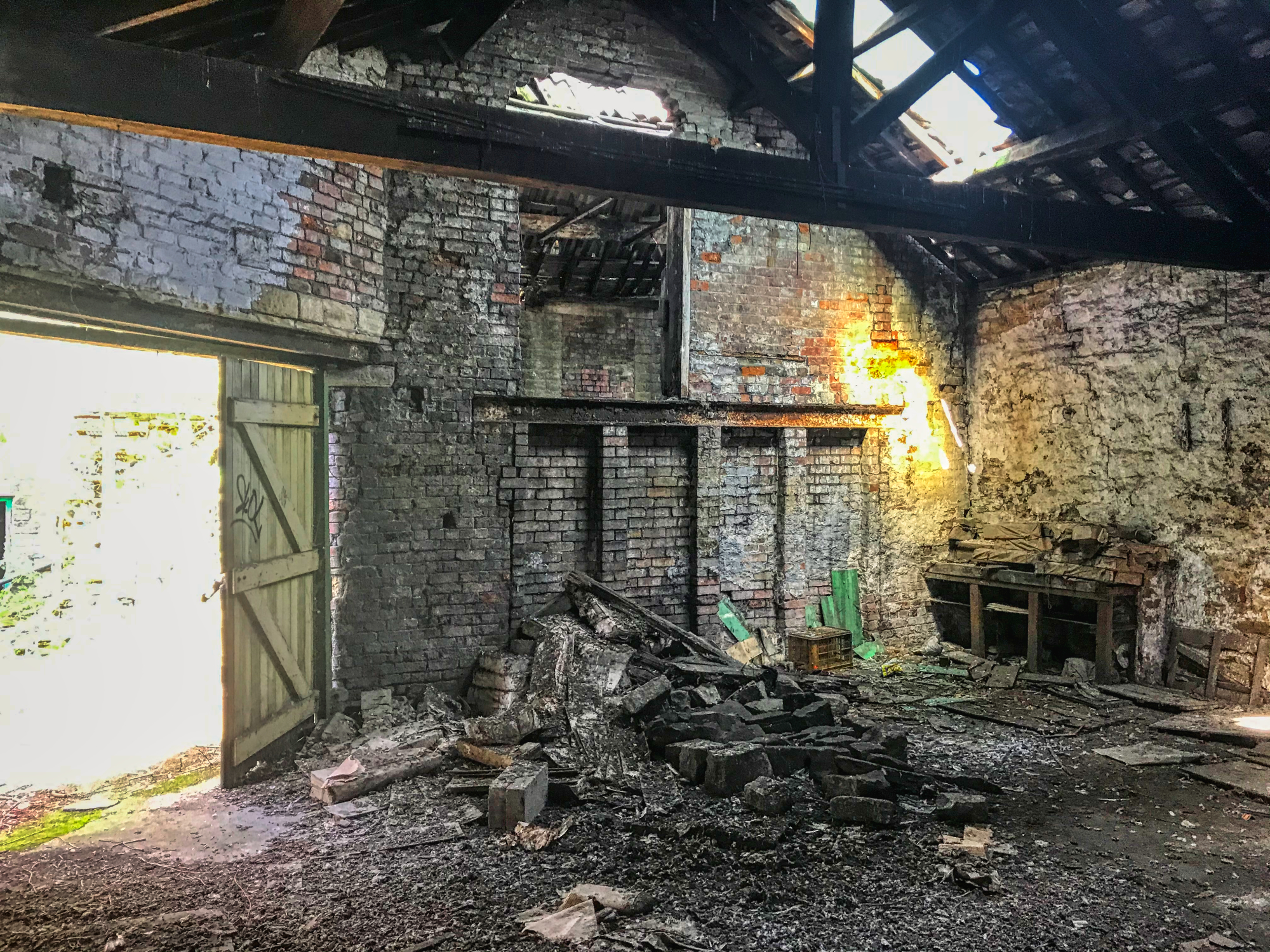 They are not bags full of old newspapers from before the Second World War but some old tiles or bricks. 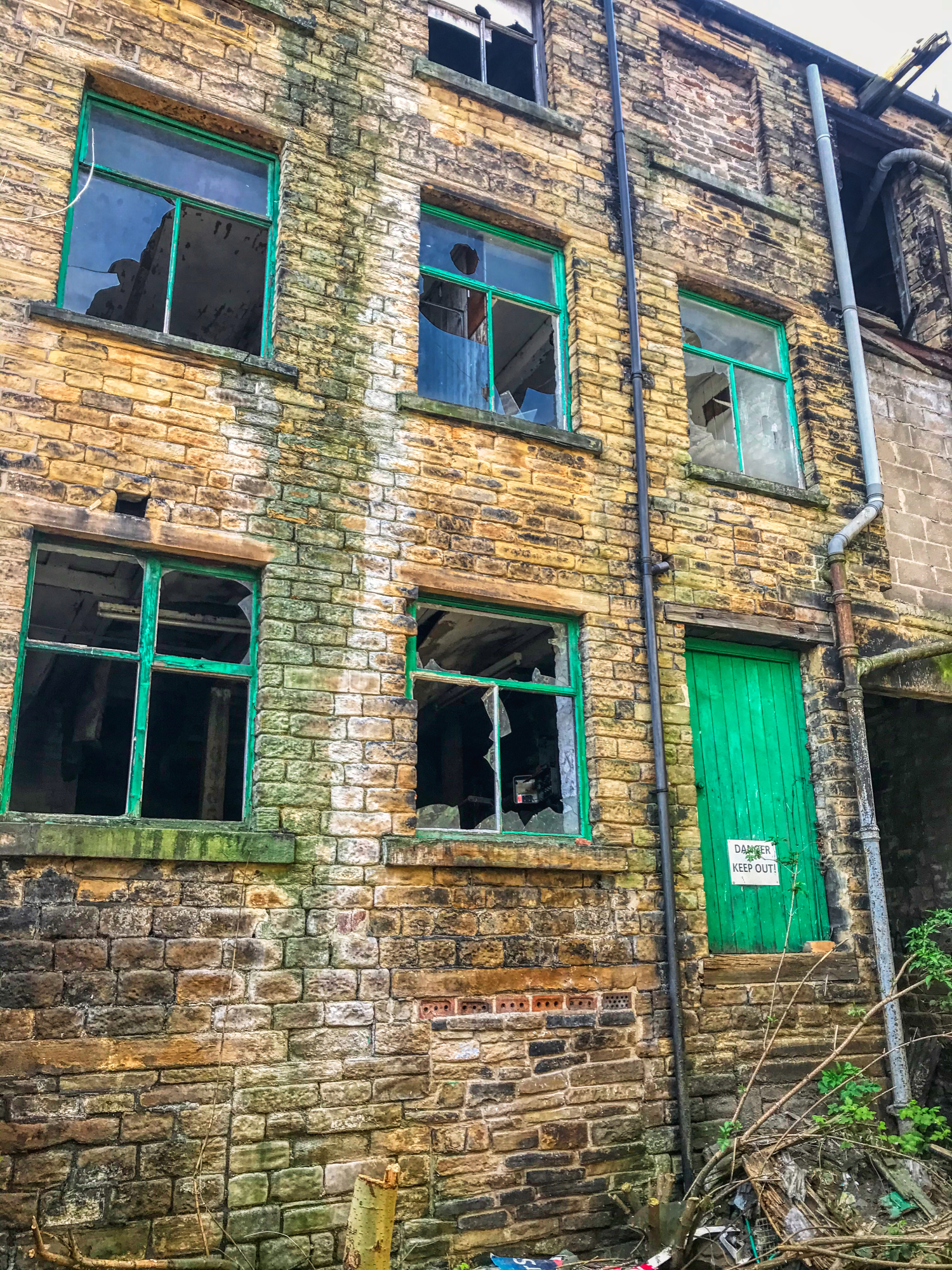 Crawling through the bottom window within the main building that was thankfully devoid of glass, revealed a broken-down room with some large padding. Hmm, not very interesting at all.

@anidiotexplores, I guessed had already ascended the green metal stairway which turned out to be sturdy enough. 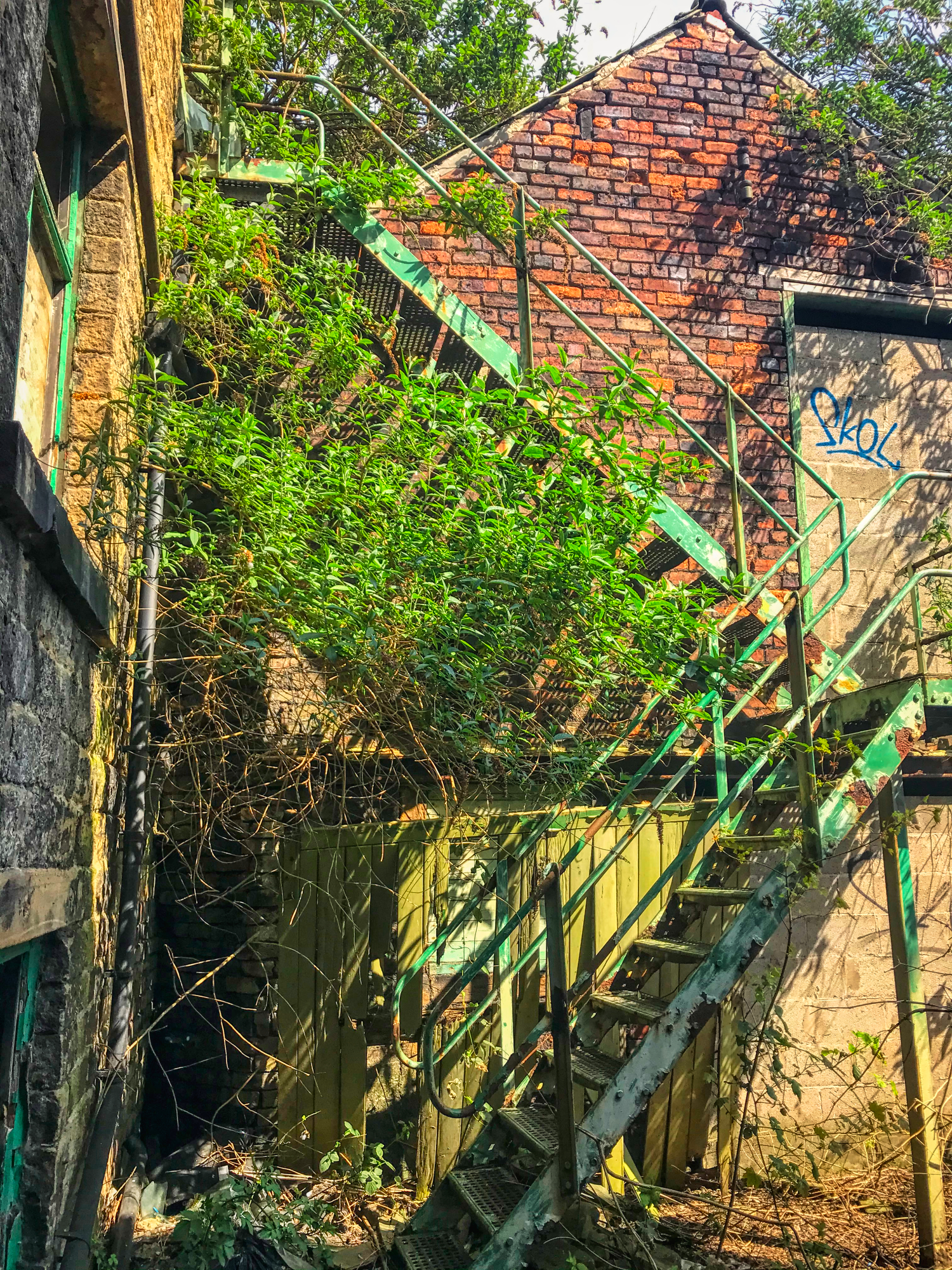 Climbing through the hole in the concrete I found an extremely wobbly bucket that threatened to collapse with if I added my weight on the landing zone.

Narrowly avoiding twisting my ankle, I stretched and stretched for the ground not wanting to place too much weight on this upper storey that was four inches deep in pigeon shit. Fern Mills had seen better days that was for sure and I tentatively tiptoed around hoping the floor would not collapse. 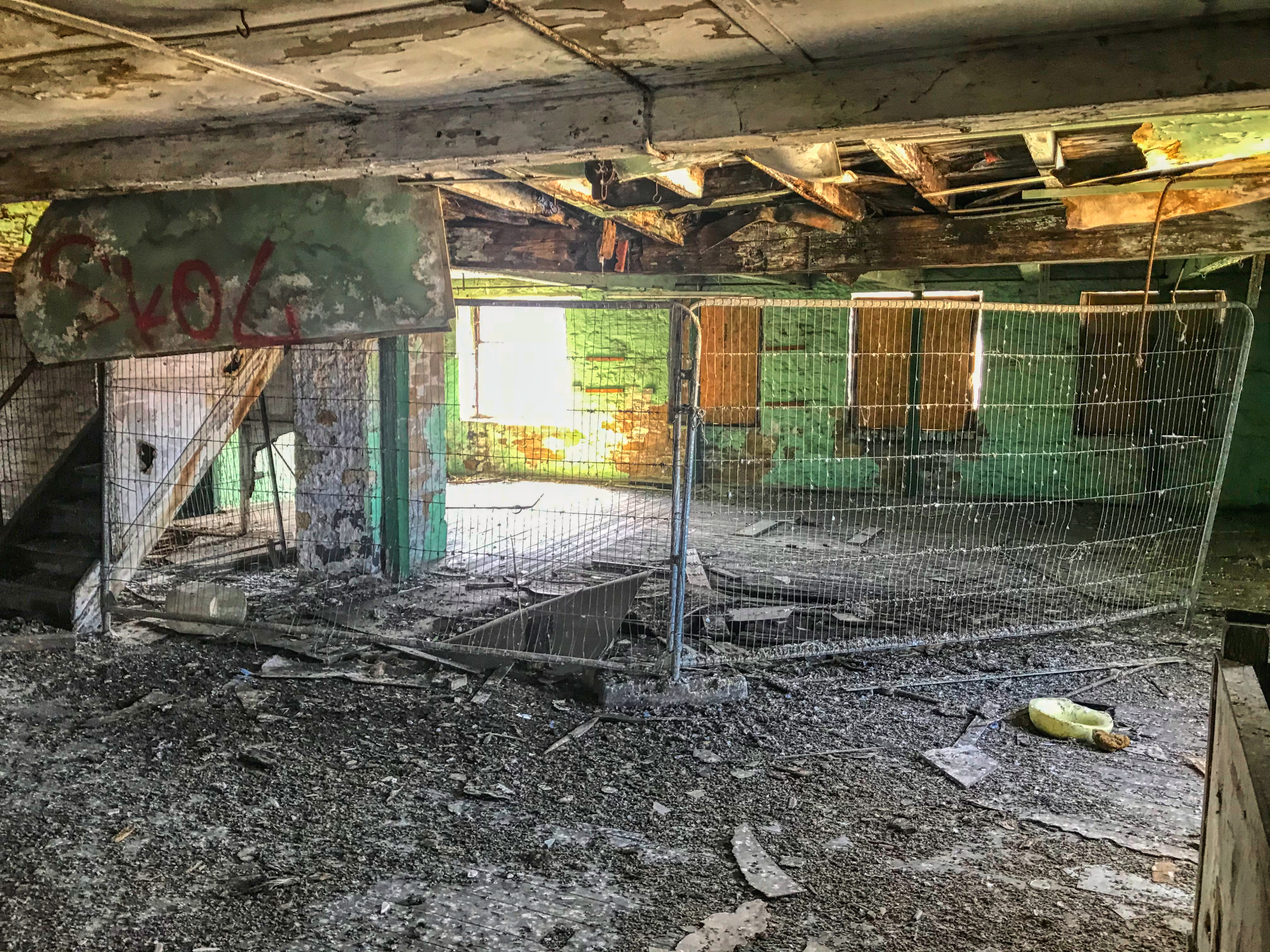 I felt heart-warmed that the owners have erected herras fencing INSIDE to stop us, explorers, from killing ourselves. There were many holes in the floor; one even had a handy toilet fitted. There were no warnings about NOT placing your arse on it. 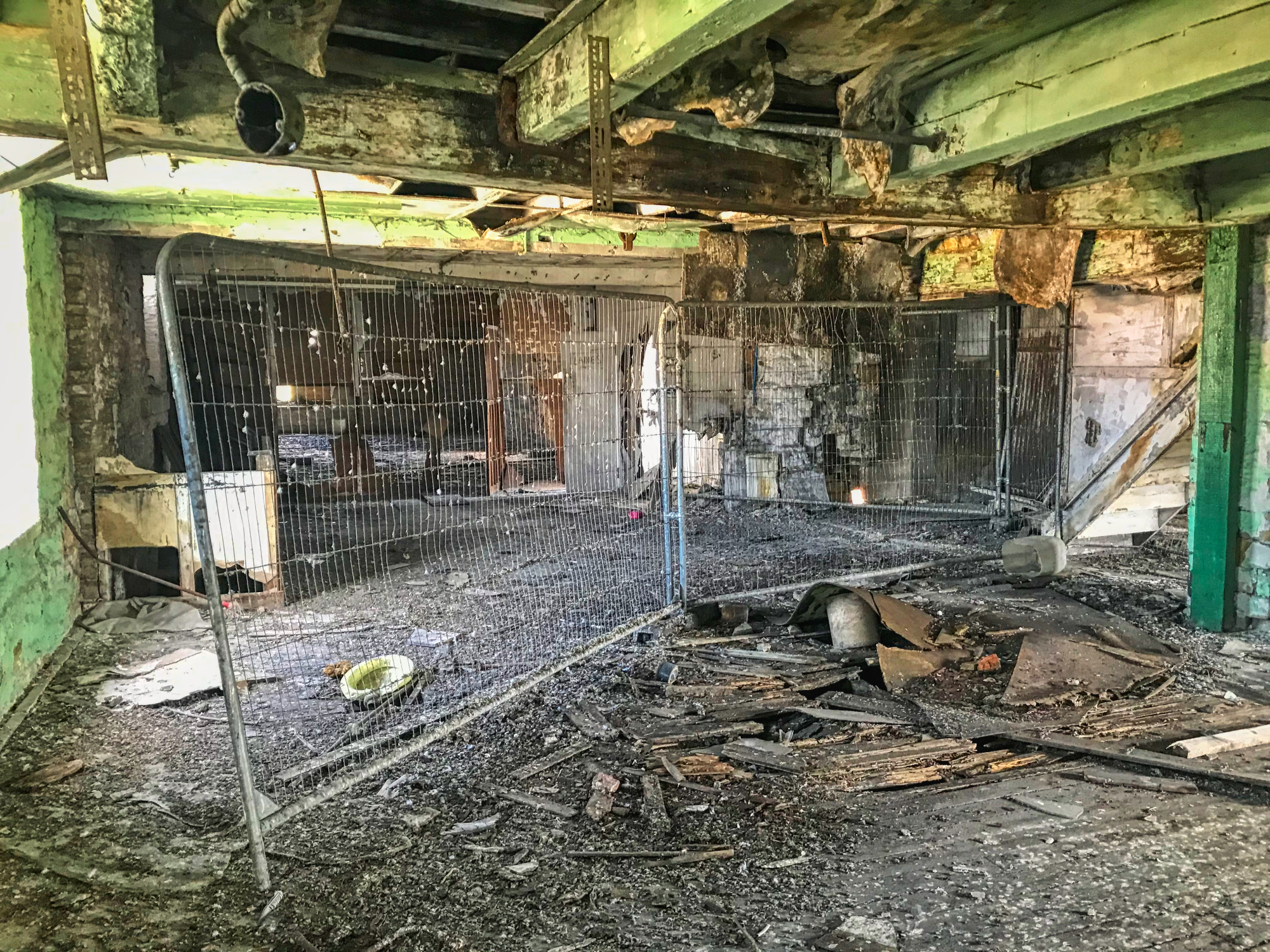 We were not the first to view the astonishing sights within Fern Mills. 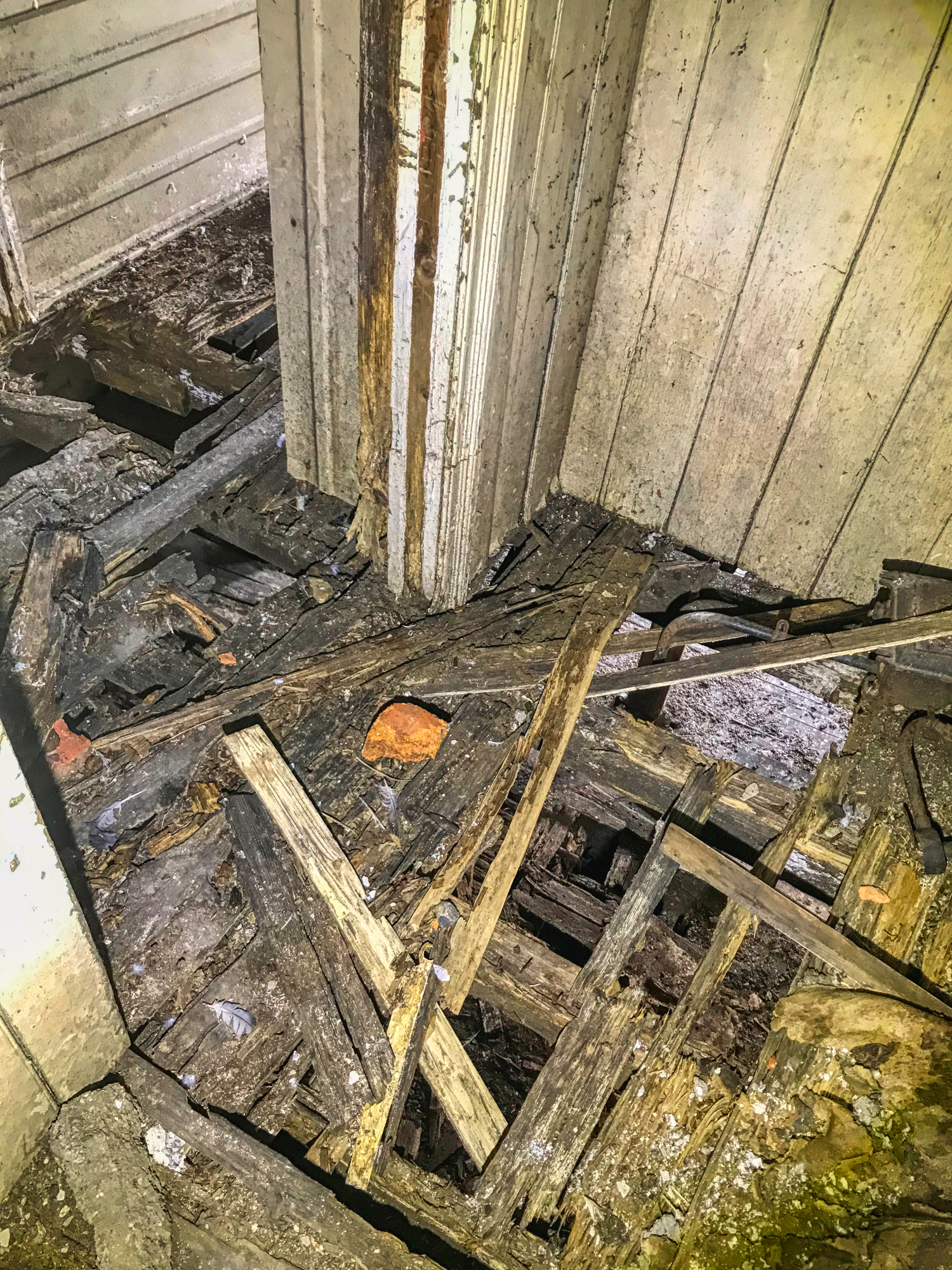 You do get used to avoiding holes and straddling over them. The real toilets, and a reminder of when I was young and had to drink very bad beer because the good stuff didn’t exist then. 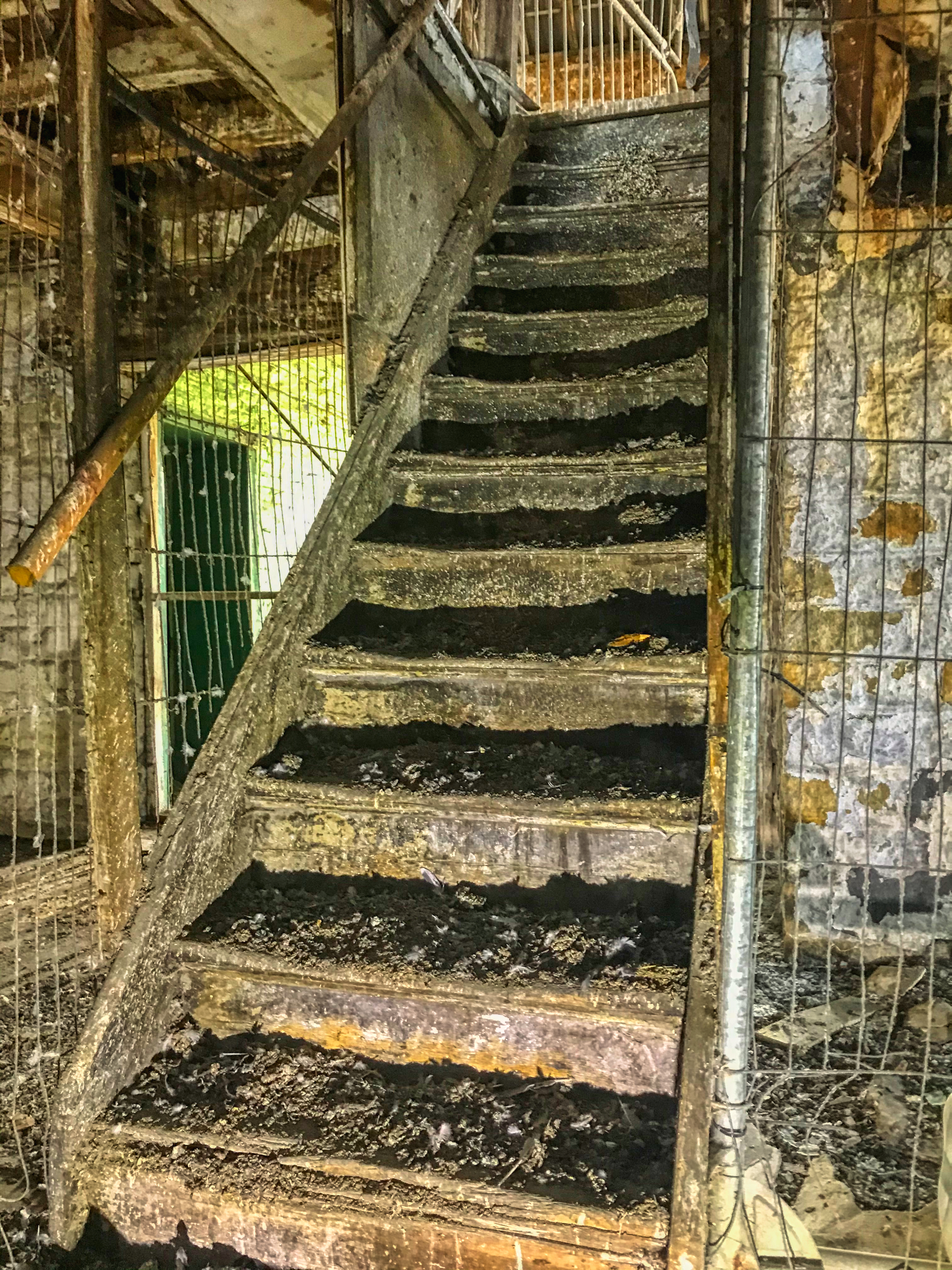 We were already upstairs but when there are more stairs, you just have to climb up them. Up there was plenty of light and I was looking for that great shot once again. 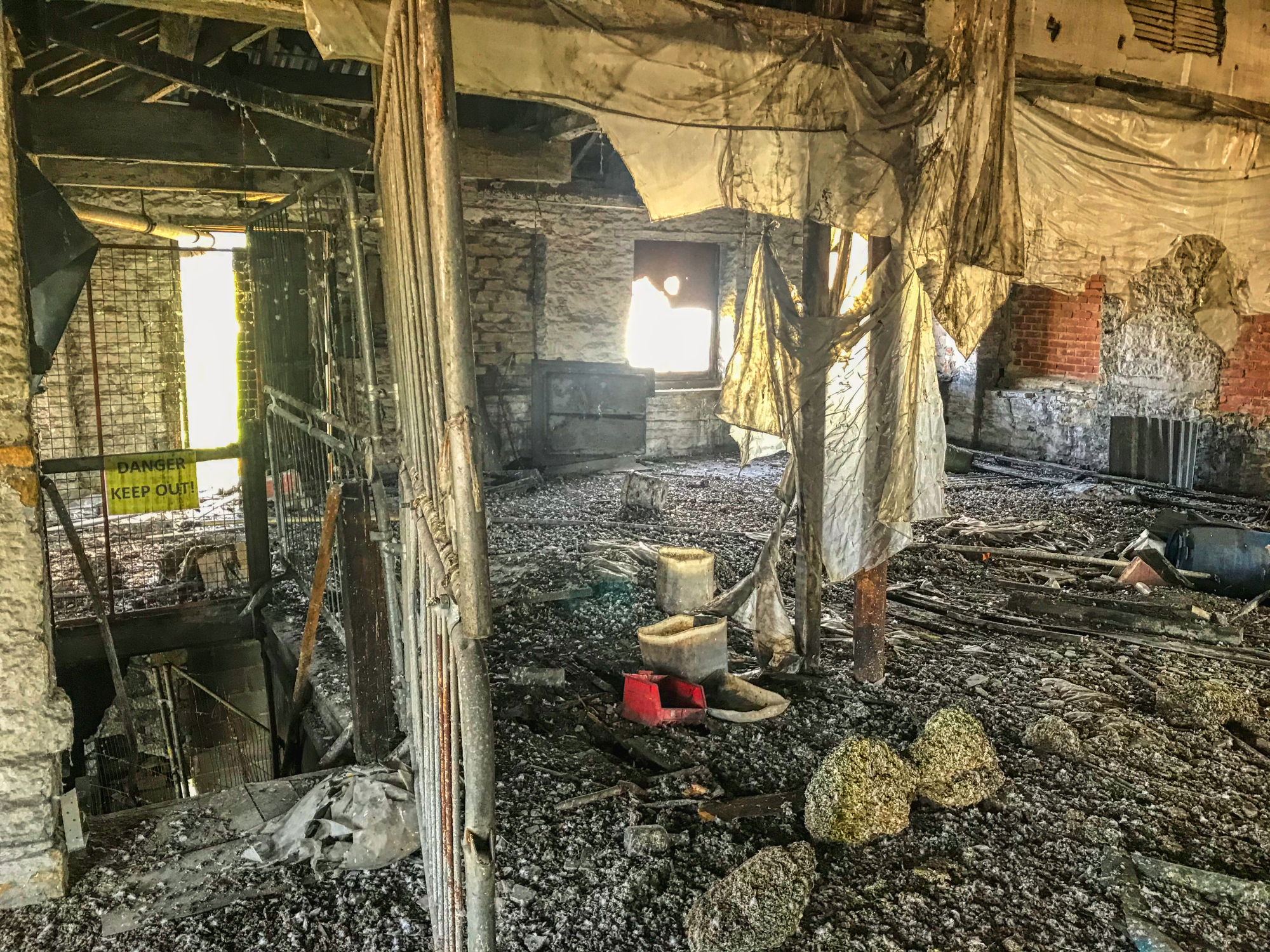 Walking on the top level was tetchy. I was edging around more than walking. It's the old foreground/background shot except this rusty old bin was not cutting it. 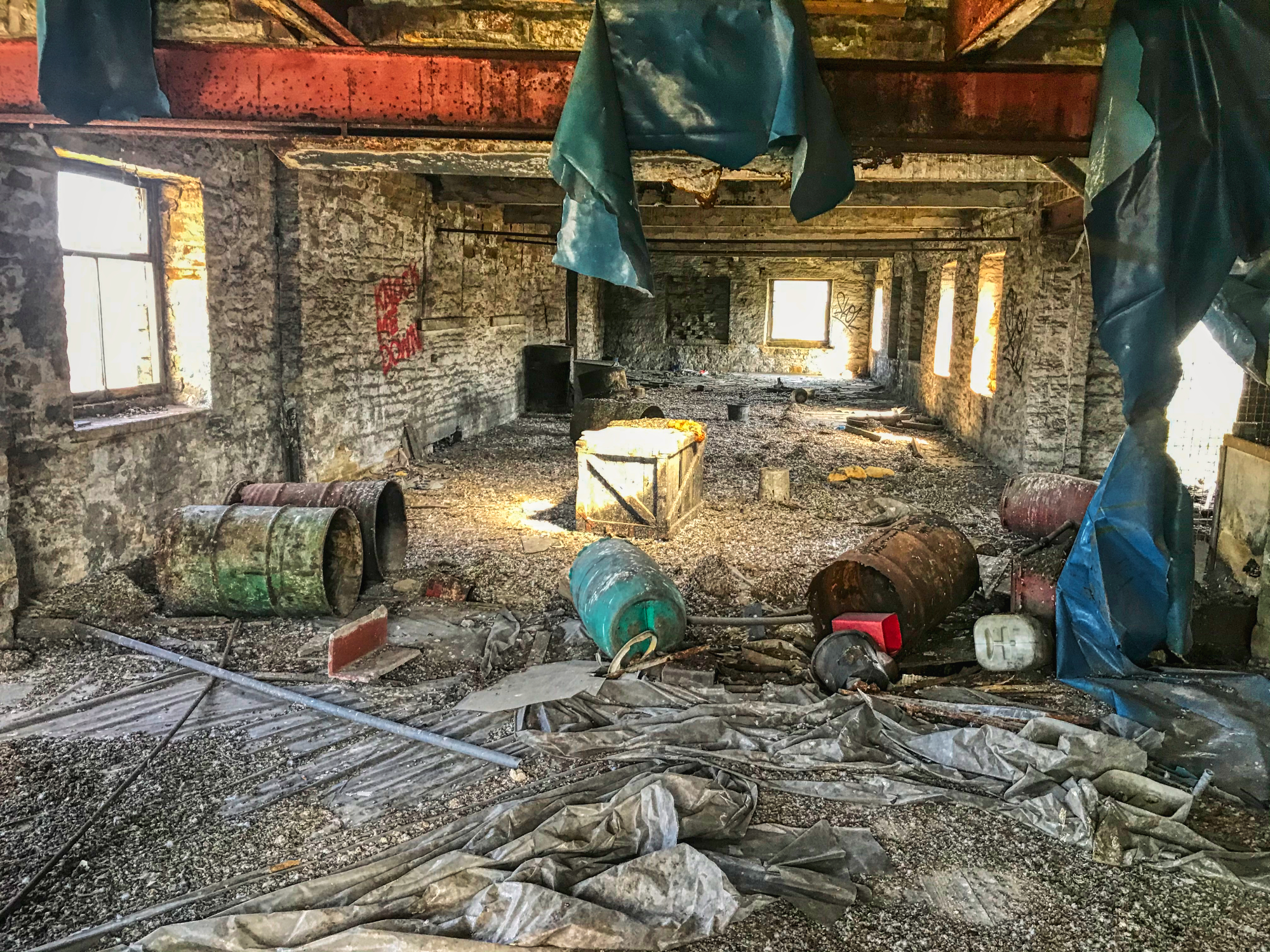 Either Skol is a person or someone likes drinking rats piss and is a little obsessed. Danger signs, I never did stick to the rules. 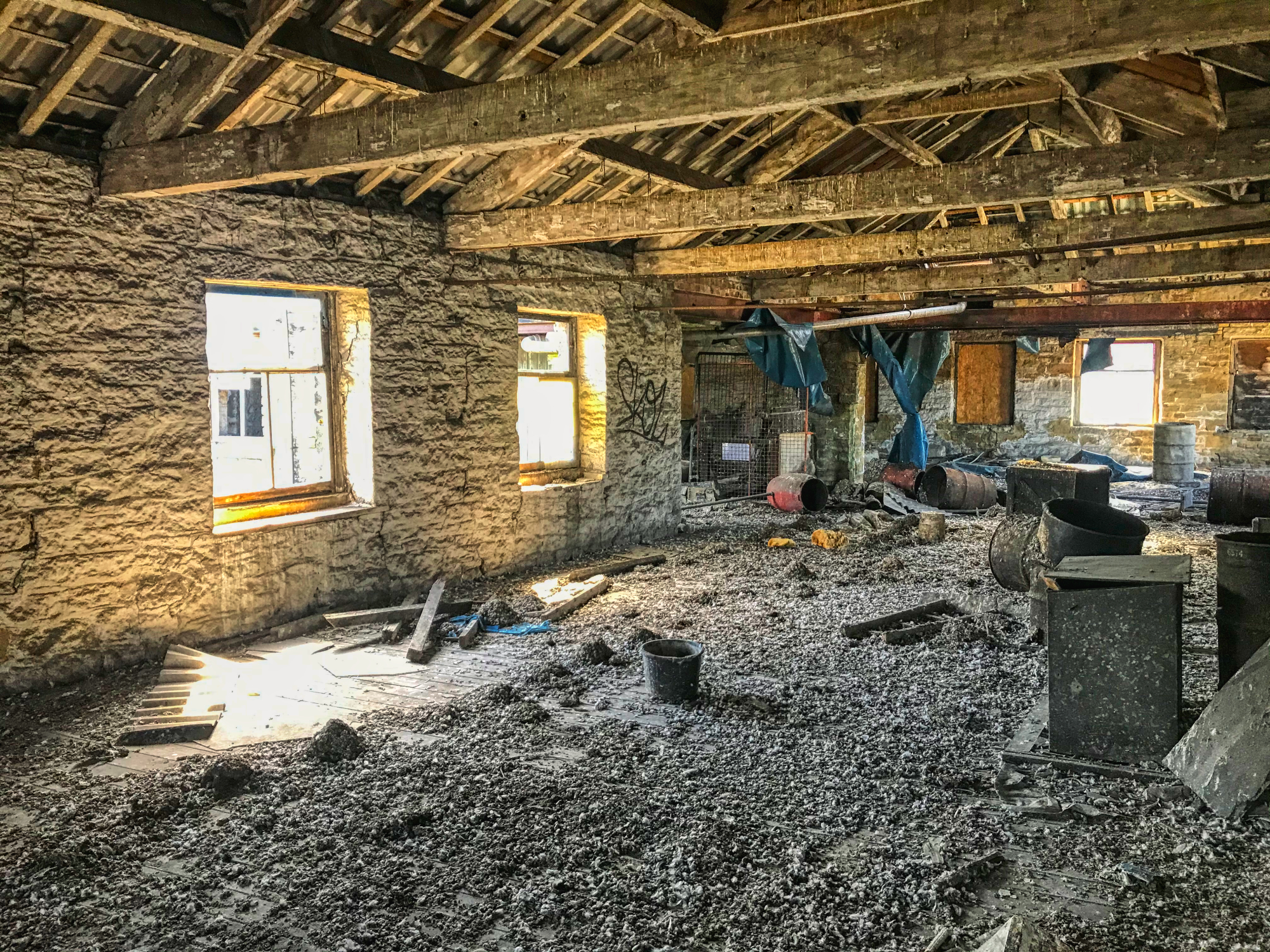 Ultimately there was little left in Fern Mills besides lots of shit. This is as good as it gets. I think I captured a little atmosphere. 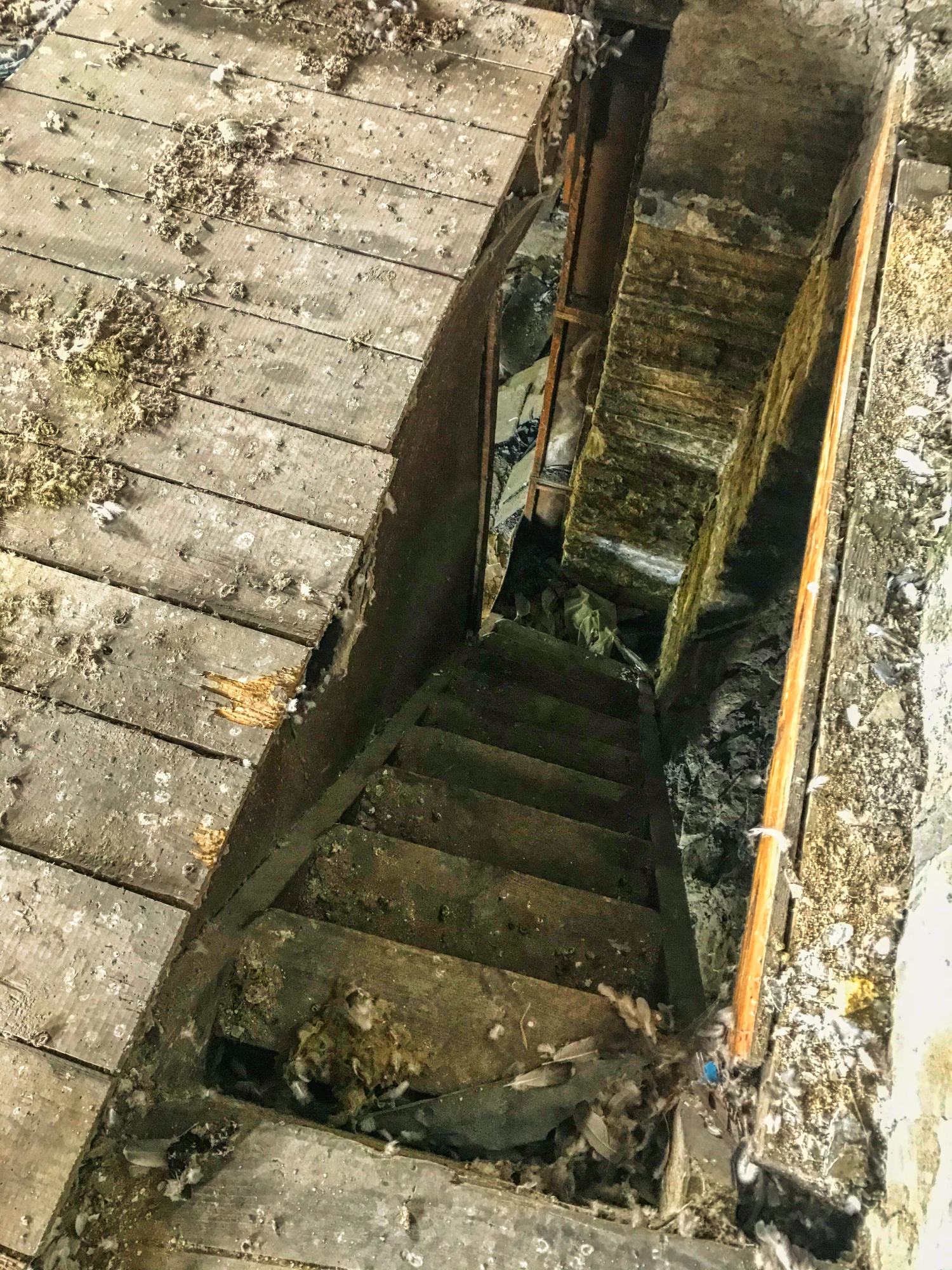 Those chains are very common within old mills and are wonderful for attaching corpses too. If exploring wasn’t so popular the local serial killer could use Fern Mills as a decent base and remain incognito. 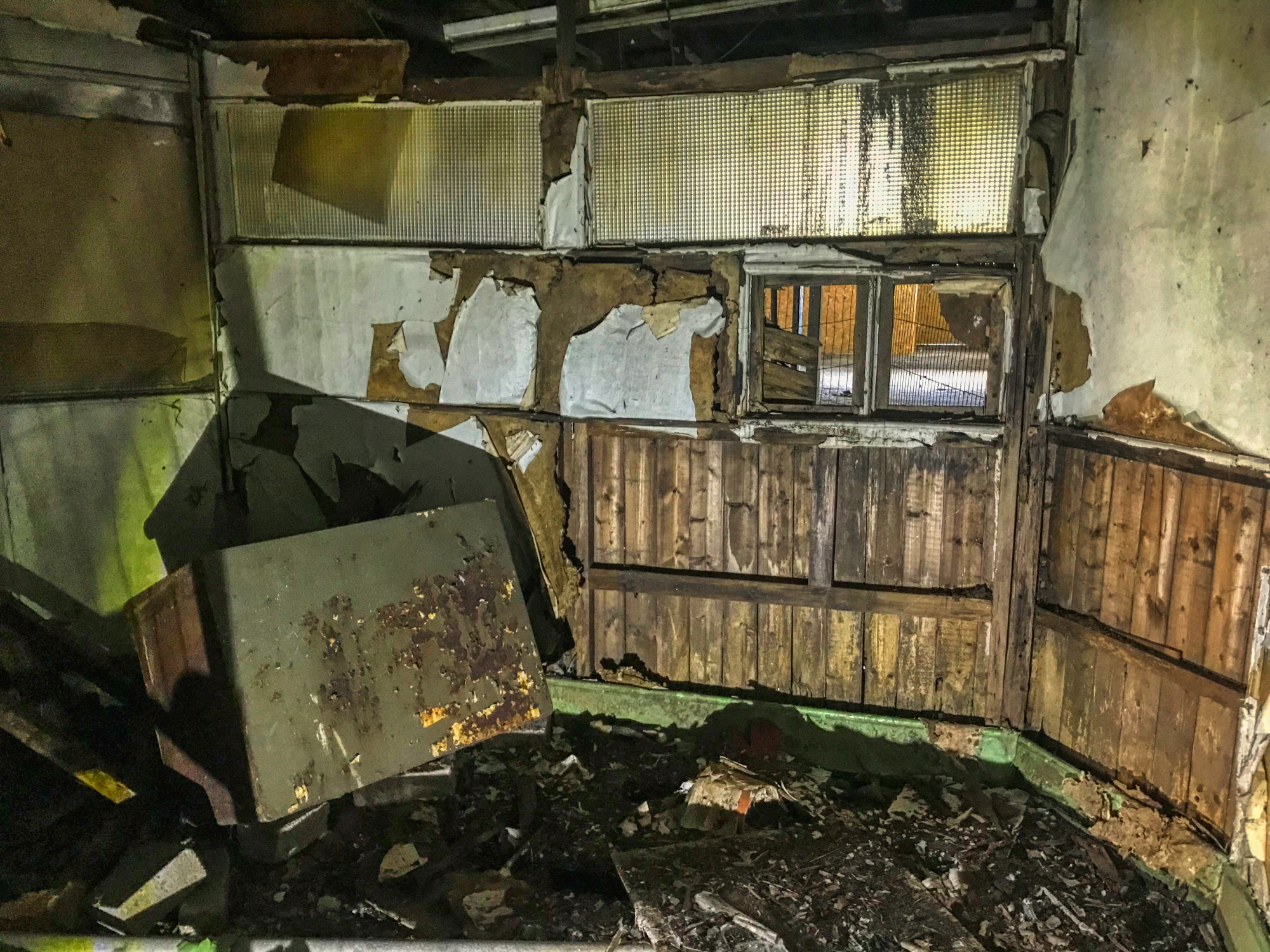 On occasion, I do take note of the danger signs. Having signs at all inside is quite unusual. While escaping and struggling on that glass encrusted wall again, @anidiotexplores told me in no uncertain terms that two cops had noticed me exiting but were on the wrong side of a canal bank. 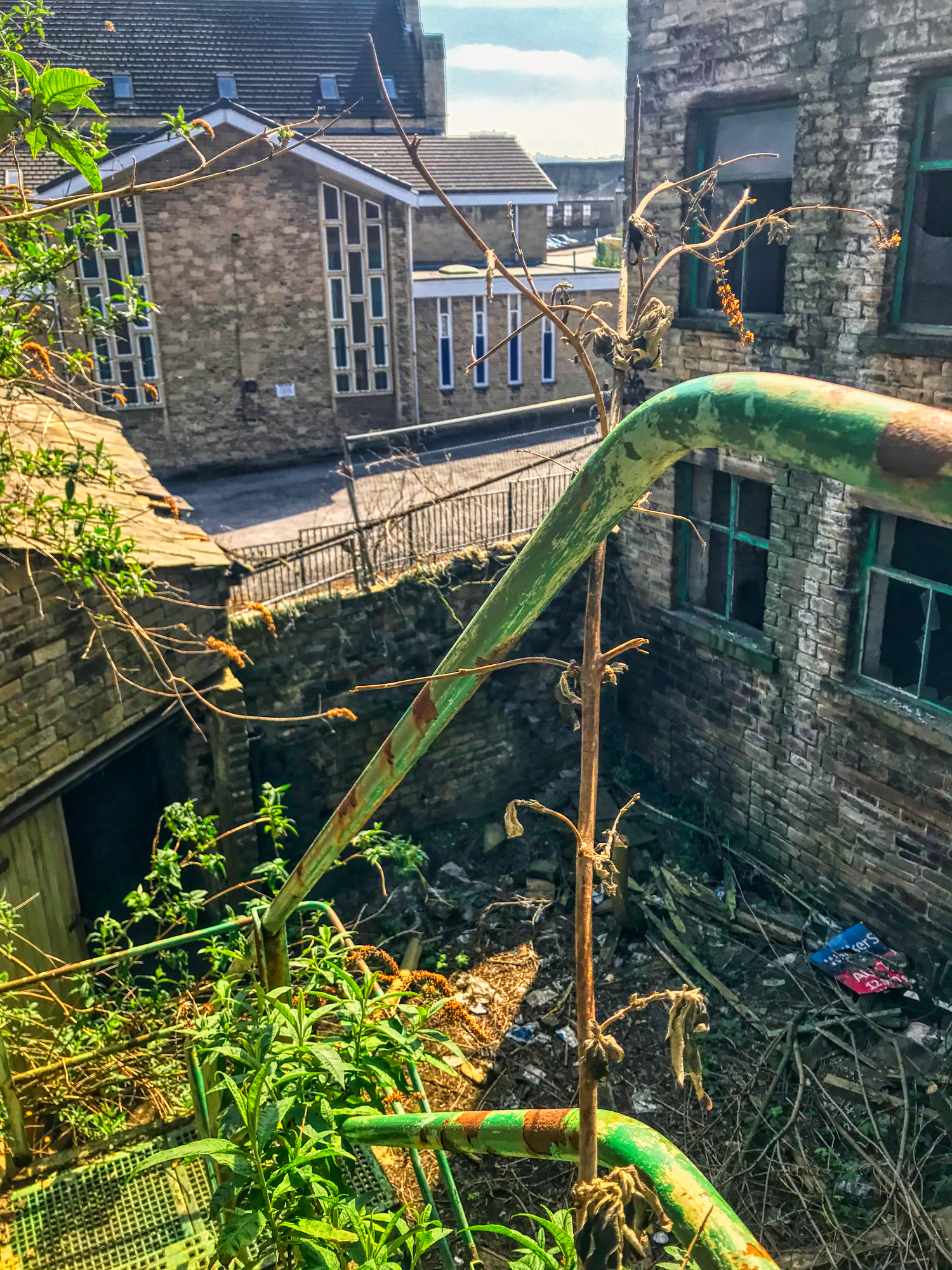 In my struggles, I had not noticed, but they seemed ‘unfazed’ according to him. Nevertheless, we legged it to the car and screeched away at high speed.

All my 'Tales' content is easy to find on my personal website:
'Tales of the Urban Explorer'

Oh, my! You really know how to show a girl a good time! The last time I saw holes in the floor for relieving one's self was in Italy.

I'm on the Metro, I'll finish this when I get home! I'll just take it with me and bring it home.

LOL, sitting on that one would give you a free 15 foot downward ride!

After lots of grunts, groans, and swearing, I ever so slowly pulled my weary legs over to make the descent sweating like a bastard but miraculously not getting any cuts.

You do know that you give the best visuals, right? Stand-up comedic visuals. I can see it. Up here. Points to head.

I like the brick on the outside of the building where the green stairs are. I collect old bricks from buildings being torn down. Best use for trails through my property. New ones are junk. They stopped making quality building materials long ago.

The last few pictures have a lot of character and even charm, in an urbexy kind of way. The one with the chains I was almost okay with until the serial killer mention. It would be a good location. I hope you signed your name there. Add it to the list. Evidence left behind and all.

Funny how the mention of a cop can make a lame man run, all the way home. You have got to be fun to be with on these excursions. LOL

Thanks for the tour!

Well another missing floorboard with rusty nails, potty problems along with not being catlike is problematic when out exploring....

You are asking for injury, hospital food, and decapitated limbs.

At least a needle there for quick relief @slobberchops

All these guys who I collaborate with are younger than me. The bones start aching when you reach a certain age. I can do it, but probably look like a geriatrics in their eyes. Those cops may have felt sorry for me...

Bone creaking adventures trying to keep up with the young... so they must thank you that the cops left you alone 😁. Always make sure they stay ahead testing the ground, good excuse in case you need to blow!

That's a lot of shit in there. Could be mined for guano. Looks like a lot of holes to avoid. I do worry for your safety. Just hope you don't end up filing any reports from A&E.

Besides scrapes and cuts nothing as yet. I usually get injured... it's one of those things you get used too.

Well I bashed my leg with the pool ladder yesterday. Life is dangerous.

There's an old mill in Halifax I know of. Last time I went it was sealed. It's a very beginners style UX. If you manage to get to @c0ff33a's place.. I'll introduce you to my world. You may get bitten.

@slobberchops! I sent you a slice of $PIZZA on behalf of @steevc.

Hiya, @LivingUKTaiwan here, just swinging by to let you know that this post made it into our Honorable Mentions in Daily Travel Digest #1266.

Thanks @livinguktaiwan, I know it was the toilet that swayed you :)

The Syringe 💉 💉 💉 looks suspicious Sir.
Keep exploring and scaring🥶 🥶 🥶 us with your stories.....

I only wish I had a clearer image of that. It didn't come out as well as I would have liked.

I have said it before, I don't have a fancy camera. I use a standard iPhone 7. It's not new by todays standards.

I must say the camera quality is pretty amazing.👍

Yeah, not much inside this one. It seems like it was pretty sparse. At least you were able to get in and poke around a bit. That is probably less disappointing than when you can't even get in.

Sometimes it's the challenge of getting in that is worth quite a lot. There is more than once aspect to all of this.

Another winner of a let me show you a magnificent broken down old 'bird shit' everywhere kind of place @slobberchops. I am glad that I was not climbing up behind you on this building ...... although I do like a bit of adventure now and then. I think I know why the building did not sell!

Whow, that is a nice one and what a story.
You deserve more than just a !BEER for this.
Let's see if I can find another #urbex here in Crete.

Why would you not put your arse on that. It looks fine.

It's not the first bog I have seen with a large mass of fresh air directly beneath.

plod huh wrong side of the canal, keystone cops, 😀

I wasn't taking any chances, the less of plod I see the better.

Submit
0.00 PAL
Reply
[-]
poshtoken  16 days ago
The rewards earned on this comment will go directly to the person sharing the post on Twitter as long as they are registered with @poshtoken. Sign up at https://hiveposh.com.
100%
-100%

It failed to generate any interest and has been sitting in a similar state to what you see now.

Not to be rude or anything similar, but this sounds/looks like a first class Steem blockchain and Hive blockchain experience for most users, if you know what I mean.

I don't agree, almost 11% APR is better than you can get at most places. Author rewards are the icing on the cake. Does your local bank offer this kind of interest?

Hey @slobberchops, here is a little bit of BEER from @detlev for you. Enjoy it!

If they are haunted I don't see it. I have little psychic energy which suits me fine.