Is the DEATH splinter really underpowered?

This has been a complaint about the death splinter since I can remember - its underpowered!

Maybe so - but I'm still getting wins with it - and wins with cheap commons to boot!

Check out this battle against Lorna Shine - who's summoner power is overpowered in low mana matches, basically requiring a 'free hit' to make each of their monsters able to take damage.

I wasn't too sure about this battle (isn't that the fun of this game?) - but Undead Rex did its thing!

Another gold level common that I find really useful in my Death Splinter matches is the Cursed Slimeball, who gets redemption at level 6.

Notice that Cursed Slimeball does its job here and clears the board of Lorna's protective cover, letting Rex trample through the rest of the crop. 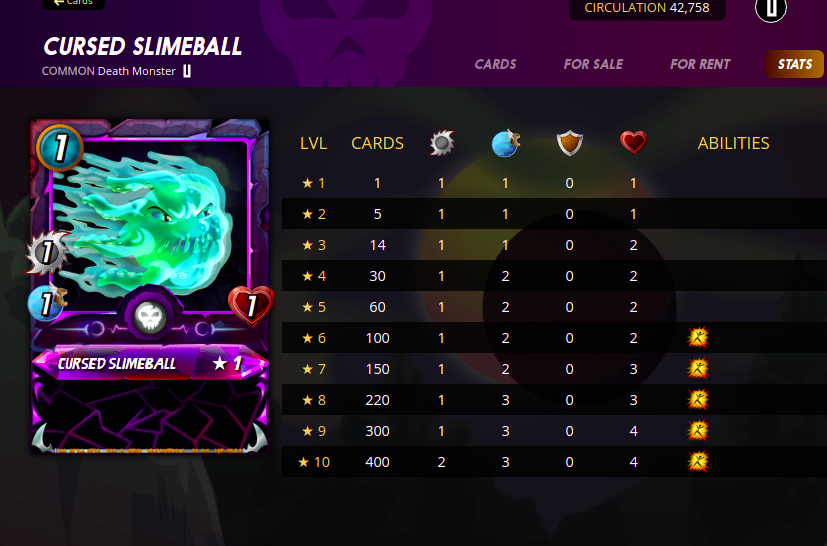 If the enemy has a fast attacker, I like to put it in front of Undead Rex so he can come out against a weakened team, but this doesn't always pay off - Rex isn't that slow himself with 3 speed and can miss a turn this way, as with this loss of mine:

Notice I foolishly used the Ooze to slow the other team down and make Rex miss a turn, we likely wouldn't have won anyway against this powerful Death set up.

What battles can Death splinter win?

As I have mentioned in previous posts, I like my death set up with low mana matches, here is where Undead Rex really shine. If you are using Contessa, obviously any ranged based set up for the opponent is going to feel the pinch.

12 mana battles are the absolute lowest - take a look at this one:

Take note that Blast with Undead Rex does 3 damage to the second line!

I added in my Golden Chicken just to get that +10% DEC bonus on a win. 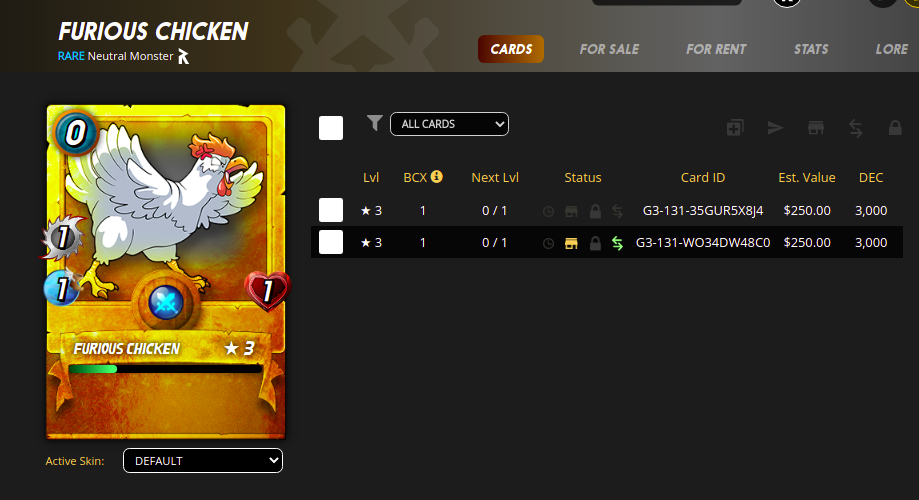 I sold a few extra of these that I had above $400 dollars, seems like the price has come down to $250, maybe I should scoop a few back up?

One of the things that probably worries all players is that with the new Chaos Legion cards set to come out, will the Untameds and Betas, all the old reward cards too - lose their value? Will Chaos Legion be so awesome that no one will want or need the old cards?

But so far the Splinterlands team has done a great job at integrating new cards into the gameplay, new metas that make old and new cards alike useful for all sorts of battles.

This means don't spend your lunch money but try not to get left behind either. This is very exciting times for our beloved game, and more and more people are taking notice of a game with gameplay and token economy lightyears more advanced than anything else out there on the market now.

For my trouble today I got a couple common rewards and 10 DEC:

Do you use the Death Splinter? What are your best set ups?

I like using Owster against teams I think will choose magic. Put the Unicorn Mustang in the first position with VOID and Owster's reflect and he can really put a dent in the opponents magic output. If you can throw a Snipe monster or two in with him (especially a magic one like Death Elemental) then you've got a good chance of hamstringing his offense early.

You can't use Owster (Death) and Unicorn Mustang (Earth) together

Yikes! You are totally correct. I was thinking of the Prismatic Energy/Unicorn Mustang combo and somehow threw Owster into the mix. I use the Bone Golem with him but usually I just try to outdamage him quickly. Probably why I don't have the greatest success with him... lol

I used to have a special death summoner that drains the opponent that's the only way its a fair element !PIZZA

I like playing with the Death Splinter in mid-ranged mana matches (around 20-25); that's where I feel that their cards are really strong.

And here I always thought Death Splinter was overpowered.....lol

I always come across the Lord of Darkness & Corrupted Pegasus combo + massive amounts of other debuffs that make my cards practically impossible to do any damage...... Corrupted Pegasus getting tank heal at level 3 is a game changer for death! To bad its legendar-ily expensive!

How about the new Gordolon reacher? Not a fan of the Gorlodon. A bit too much mana for my liking. But I am not a Death splinter player, just need to work out ways to counter Death :D

The Gorlodon works well in higher mana battles with the reduced speed ruleset. All of a sudden he becomes fast.

Death has some really great summoners
Saw someone use CORNEALUS with owster summoner
so that his cornealus had Thorns, Return fire and Magic reflect. so that it would reflect ALL damage. and also it heals itself.

EDIT: Cornealus gets magic reflect at max level, but my opponent had a lvl 3 one

Death has all the debuff summoners and really hard to beat. But as a renter, it's just too expensive to get a death deck rented. Their Legendary summoners are so damn strong and synergise really well with the death monsters.

Ermmm, I think they only time Death shine is low mana and cards lose all ability. I don't really play Death a lot but gonna explore in the future.