Delegation on Hive: The Basics The Hive blockchain is the result of intelligent work and pragmatism. It just seems as though, everything has been planned from the ground up. One of these interesting designs on the Hive Blockchain is the provision for delegation.

Why should you be interested in delegations? How does it concern you?

For both new and old users on the blockchain, there is definitely something interesting to be learnt about delegation. So, in this #HLIB episode, I will be exploring in-depth the concept of delegation and how to make the most of it.

So, in this edition, we will be covering the following:

Before further ado, let's get started!

What is Delegation on Hive?

To get a more clearer definition/explanation of the concept of Delegation on the Hive blockchain, let's refer back again to the Hive Blockchain's Whitepaper.

According to the Hive Whitepaper, delegation is the temporary lending of one's Hive power to another user.

When you perform delegation, you are in essence giving off your Hive Power, in essence, your staked Hive tokens for the benefit of the recipient. It is important to note that delegation is not the same as borrowing.

Whenever you delegate to a user, you have full control of the delegation, the user will definitely enjoy the benefits that come with delegations, but does not have the delegated Hive Power count along with their Hive power, thus, you do not lose Hive power following a delegation.

You can look at delegation as sharing a pen with a person, but this pen is tied firmly to your arms and you can retract it whenever you want. It could as be seen as sharing a piece of painting with someone for a photoshoot (as shown below), they enjoy the benefit of being considered owners, even if they are not: 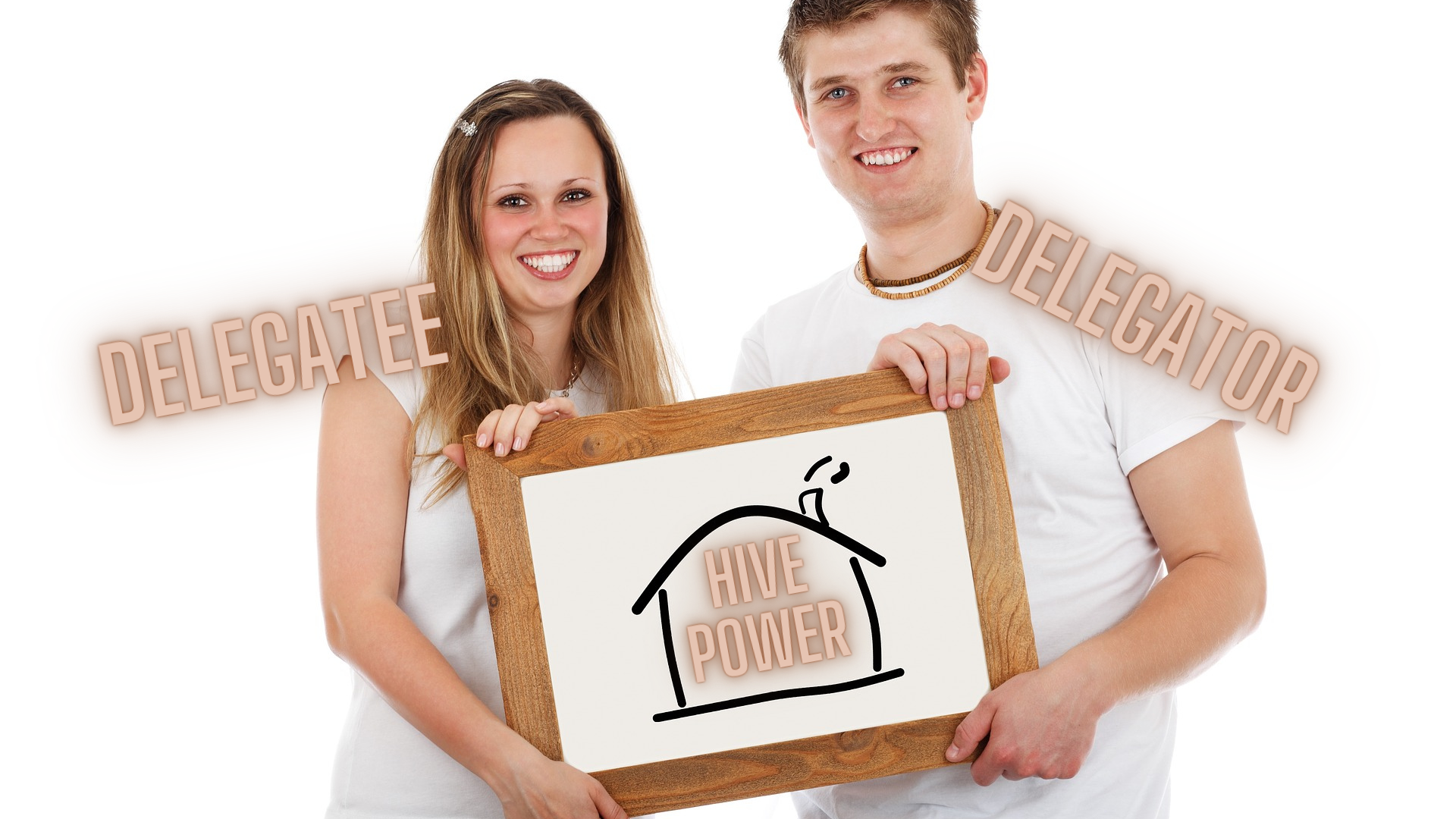 Designed on Canva with Image by Tumisu from Pixabay

What relationship exists between delegation and Resource credit (RC)?

What do you give when you delegate? The long and short of it is that you are sharing Hive Power whenever you delegate, and Hive Power is akin to your Resource Credits.

To appreciate this relationship the more, let's go back to the Hive Whitepaper:

Each Hive account holds a given amount of credits related to its stake. Those credits are then consumed when transactions are executed on the blockchain and automatically recovered with time. The amount of Hive Power attached to a given account determines its level of stake and allows for the calculation of the associated bandwidth.

... delegated HP raises the recipient account’s Resource Credits for the duration of the delegation but does not augment their own pre-existing stake in regards to governance-level impact.

What does this tell you? In simple terms, everything you do on the Hive blockchain is a taxable transaction that on other blockchains we could pay transaction fees.

Yea everything! This includes posts, comments, editing your profile, upvoting and downvoting, transferring Hives, and even claiming rewards. In fact, you can find a log of all transactions on the Hive's blockchain explorer. 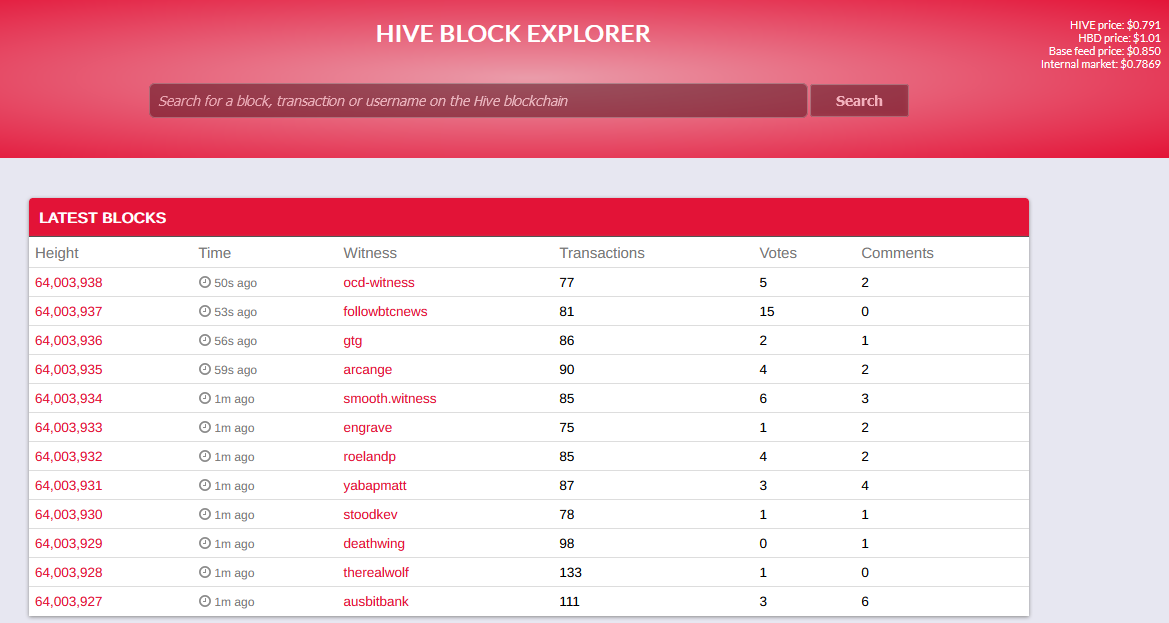 Simply search your username to reveal a log of all recent activities on the blockchain.

So with more delegations come more activities on the blockchain as a result of more resource credits and in effect more voting power, which could effectively translate to higher curation rewards.

How do you delegate?

The wallet section of most frontends directly enables you to make delegations. It is as simple as the transfer of Hive.

First, make sure you are logged in with your active key, or import your active key to the keychain extension/app/Hivesigner as your posting key may not enable you to perform a delegation.

Next, simply input the recipient's username, and the amount of Hive Power you intend to delegate in figures. You can also make and manage delegations through Hivestats.io, Hivetasks.com, as well as through other DApps.

Only input your keys into a Dapp you trust.

Interestingly, you can also make delegations with second layer tokens as well.

Why should you delegate? and to who?

While there could be numerous reasons to make a delegation, I want to sum up this up into two basic reasons:

Delegation to Support a User

This is usually the case when a new user is onboarded into the blockchain. One way to support them is to make them a delegation to help boost their resource credits so that they can engage more on the blockchain.

Most of us - newbies, enjoyed these delegations and we are forever grateful to our delegators.

This is another important aspect of delegation you need to be aware of. To begin, how much Hive Power do you need to have sufficient resource credits and a good refill rate to be able to engage comfortably on the Hive blockchain?

From my experience, having 200-300HP is sufficient for most persons that have a moderate level of engagement. So, what if you have more than 200HP? Then, after doing your due diligence, it may be best to put your money to work; and that is where delegating to earn comes in.

Delegation could be considered a form of passive investment on the Hive blockchain. There are myriads of accounts/projects who can receive your delegations and pay you back in Hive. You just have to make the delegations and nothing else.

I have managed to crawl the Hive blockchain and found articles containing who these users/projects are. Here are some:

You can also do more with your delegations by visiting https://hive.dlease.io/market, here you will find accounts where you can delegate HPs for a specific length of time and receive Hive in return.

Note that all users/projects receiving your delegations are unique, so do your due diligence before deligating.

But why do these accounts need your delegations?

According to @Leofinance in this article:

Different users/projects may have different agenda for recieving delegations, however, the basic idea remains the same, more delegations equals more HP and if utilized properly, more curation rewards, which they could in turn use in paying investors, i.e. the delegators.

What are the downsides to delegating?

This is not a problem if your engagement level and activities are not so high on the blockchain.

But for most #newbies, I will recommend holding off from making a delegation till you have sufficient HP to fund your Hive Lifestyle as well as support a delegation.

Remember, your delegated HP remains your property, so, there is no need to fear that you will in any way, lose your HP through the process of delegation.

Could there be other risks? Feel free to comment on them.

So far, we have explored deeply the concept of delegation and different reasons why making a delegation could make a whole lot of sense. As always, make a well-calculated decision on who/what project/user to delegate to, do further research and put your HP to work.

Your feedback is appreciated. Is there something I haven't said correctly? Is there an addition you feel is important? Do you have any questions? Feel free to comment below.

Please, tag your friends to be part of this series. Hopefully, there will be an #HLIB episode weekly.

This is not all u need to know guide. I don't know if u try to look into things a bit more. Nor pros and cons are defined properly.

I know u did your best but according to my point of view your best is not enough.

!PIZZA for trying but your title is mis leading.

Alright. thanks. I'm modifying it right away!

You have done it again, you have just made me understand somethings which I don't before now thanks.

Thanks bro. I'm still learning shall. And I always stand to be corrected.

So if I delegate to bdvoter and appreciator, I would be sure to get an upvote from them when I post?...Thanks for the explanation on RC??..The amount of delegated HP would determine the expected upvotes too?

Where/in which line did you see that you'll get upvotes from BD Voter or Appreciator if you delegate to these account?? These are totally independent curation account and provide no guaranteed voting support.

Thanks mate for clarifying. I didn't state that. Even where I mentioned it, I explicitly stated that it's not guaranteed.

I think it is crystal clear, I ask questions to get clarity.. Thanks

I read curation reward and it went with a question mark because it is a question for clarity..The heading read delegation to earn and I was asking to be cleared not a conclusion.

Okay. What I meant here is this. You'll get daily rewards that's proportional to the amount you delegated and the total amount of curation rewards they earn daily.

The ROI on delegations are earned through curation rewards. So, they will pay you based on what they earned but proportional to the amount of delegations they receive from u.

For their upvotes and curation, I can't guarantee that. It's unlikely that you'll receive an upvote from them. I've not seen where it is explicitly stated that delegating to them will earn you upvotes.

But @zuun.net usually upvotes me. But I can't guarantee upvotes for any.

Oh I get what you mean now, it is a better way and quite ideal in my opinion. It is always said that votes are not guaranteed but then it's a new information I just got and you offered the perfect clarity to my question...I would see how many HP I could delegate to some trails listed

Thank you very much for this

Good one here, @zestimony. You just did justice to some of the things I have been personally doing research on. I think I need to read it all over, so that I can compound my questions into one.
Welldone!!

It's alright bro. I'll be pleased to attempt your questions! Just don't give me carryover please 😉

This is very important information, I wish this was available when I joined hive.

Delegation has been part of the Blockchain's design. I guess you're talking about a tutorial on delegation as this.

Yes, I meant a tutorial.

This is very important, many people might overlook it

Ya. We never always look deeper

Ya. It's easy to be overlooked.

Delegate to @droida, paid monthly. Delegators get 100% of their share. !PIZZA

I have learnt a lot about delegation and how it works.

Does anyone know if @Brofi delegation of random crappy tokens still pays out in BRO token? I'm trying to find something to do with all the random tokens I have instead of sell them, like who to delegate to. Thanks. Please @ me to respond.

Hey my friend, no, no more - sorry about that. Only hive now.