Hello Summer: Different traditions and celebrations of Midsummer all around the world

Summer has officially started in the Northern Hemisphere (Winter in the Southern). Solstice took place the 21st of June and Midsummer celebrations are taken place all over the world. The shortest night, the longest day... as we move on the wheel of the year Blessed Litha! Although the astronomical solstice is the 21st Midsummer is traditionally celebrated today.

A celebration with many names 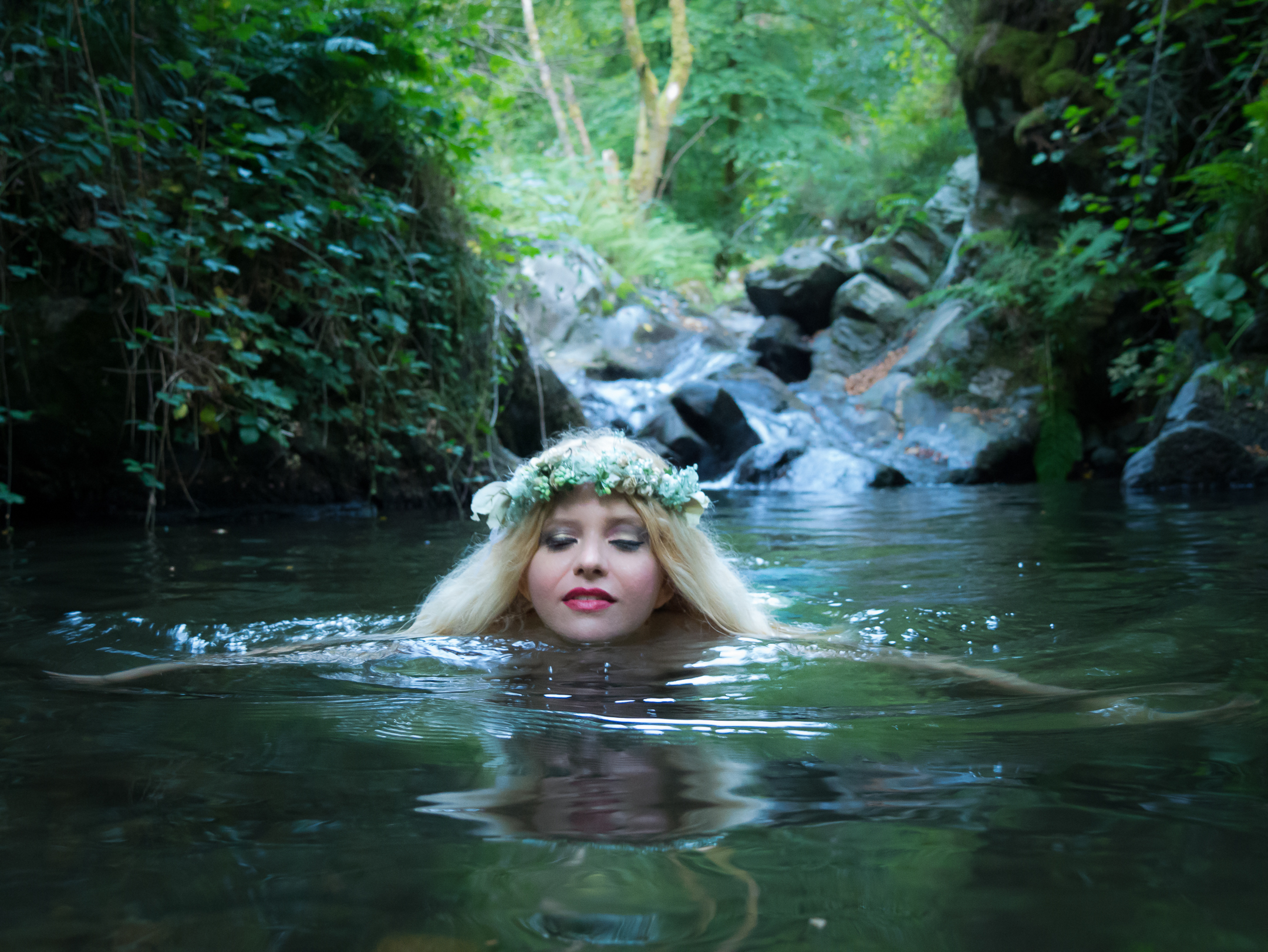 Have you got any special celebration tonight in your country? Share your traditions and rituals in the comments.

The Veil is Thin

In general during Midsummer (same as in Halloween) is considered a liminal time, an intermediate state between this world and a world unseen, a time when the veil between this and the spiritual world is at its thinnest. So it's easier to tune into the Otherworld (fairies, ghosts, spirits) At magical times such as today, Midsummer Eve, if you found a gap in the mist gate surrounding a fairy ring, you could pass through into the Otherworld... It's also believed if you are taken away to dance with the fairies you might vanish for a year (or more, like Rip Van Winkle) 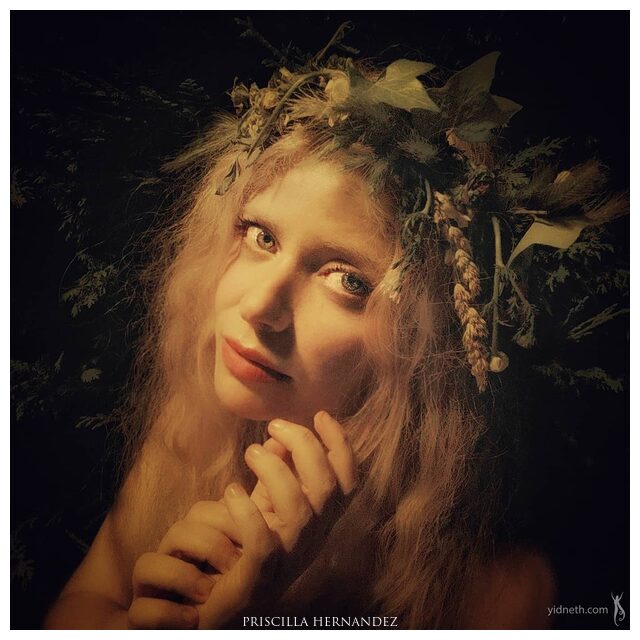 In many European countries women collect wild flowers to weave a floral wreaths during midsummer, the flowers are a symbol of life. Men will alternatively wear Oak leaves as a symbol of strength. Making the crown is ceremonial as you pick your plants by intuition and and weave in your hopes and dreams then to sometimes let it float on water (on a lake or creek). 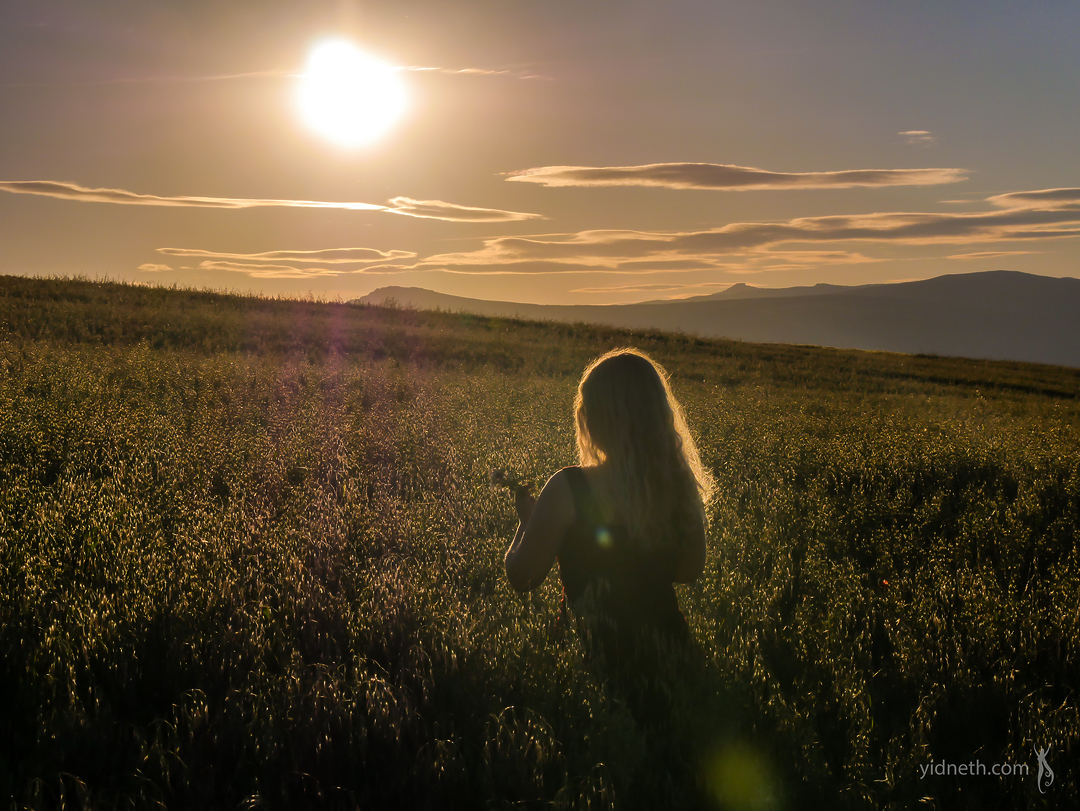 Careful though with picking Elder for your crowns as it can make you see fairies.
You should never dream under an Elder of you might never wake. 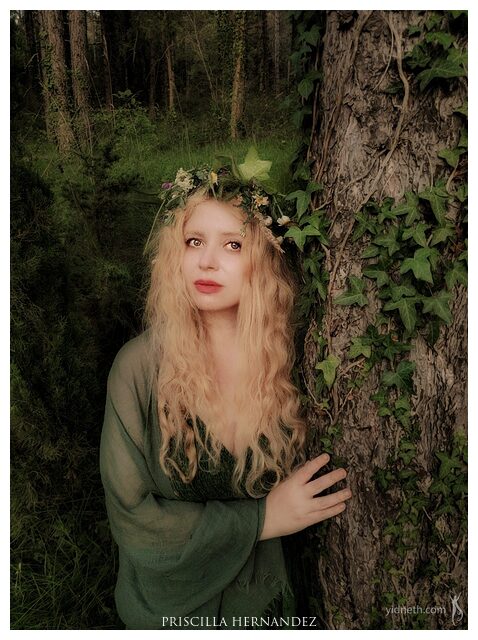 Across much of Europe, Midsummer is a time for lighting bonfires across the countryside to bring good fortune and a wealthy harvest during the Summer. It's a celebration of warmth and light. And it's also thought to be able to ward off witches and spirits at a night when the veil is thin. In Denmark's celebration Sankt Hans a fake witch is burnt in a fire (I'm not sure how I feel about that ;-))

In some places it's also a custom to jump over the fire for luck. It was said that the highest leap over the Midsummer bonfire predicted the height that year's crops would grow to. Proceed with caution!
ps. Careful as born fires can cause wild fires. This year in my area they have been forbidden due to challenging weather.
The power of traditions but with sensibility.

To cleanse and purify, people take baths in the sea or rivers 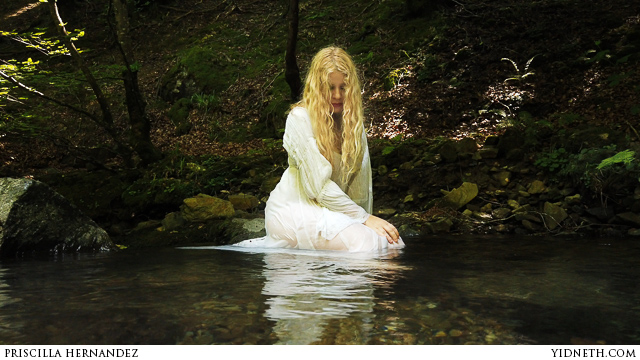 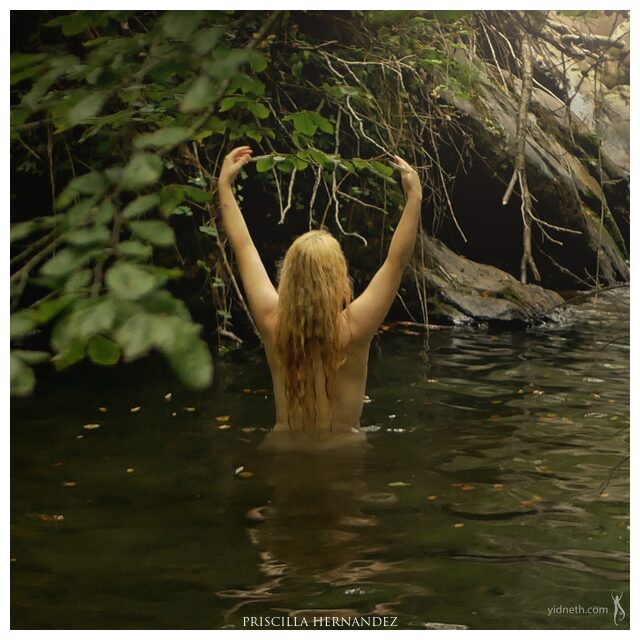 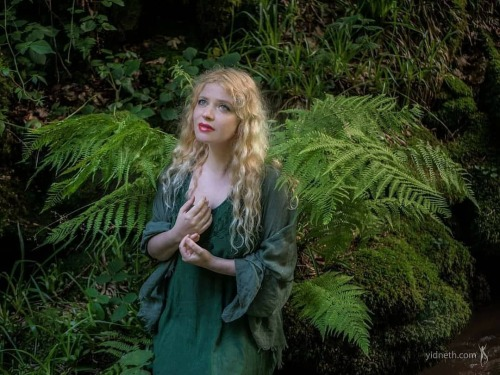 This legend is linked to pre-Christian traditions and on this date people is set to find the elusive magical "fern flower"
Many myths and legends surround "bracken fern". It was said to grant perpetual youth and repel evil.
Folklore is even referred to in Shakespeare’s Henry V
The spores of the bracken fern were reputed to confer invisibility to whomever gathered them at the only time when they were said to be visible—St. John’s Eve

Also in Baltic and Slavic countries countries it is believed that ferns actually bloom and its magic flower. Pd. ferns have not blooms (Latvian: papardes zieds) and it's only by Midsummer that it blooms. It can provide the ability to understand animals and earthly riches but careful because it is linked to the spirit world.
Lithuania, Ukrania, Estonia and other countries have similar folklore.
In Ukraine, Belarus and Poland, the holiday is practiced on the eve of Ivan Kupala Day, also Midsummer. 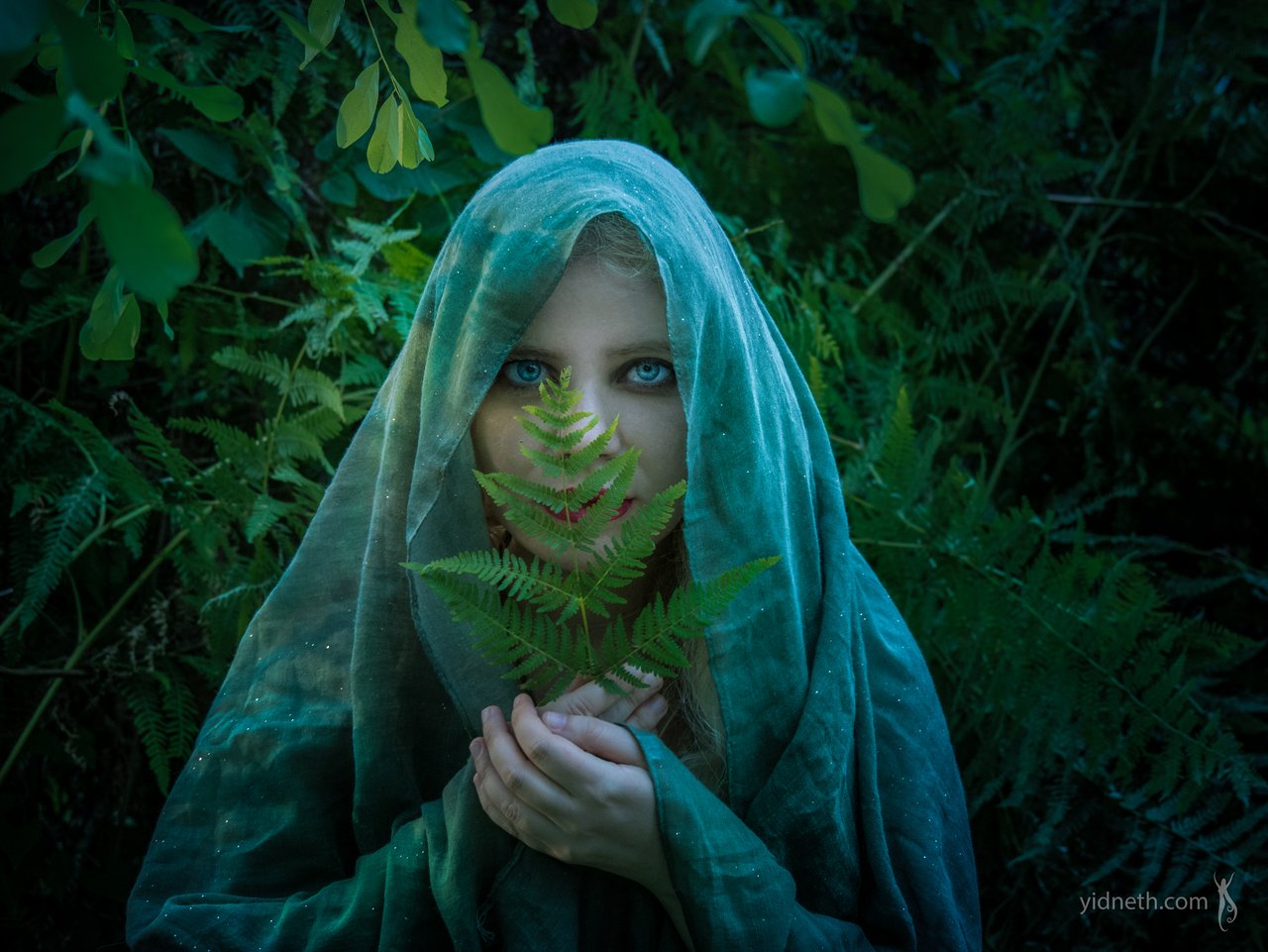 Some speculate the flower is really a species of Rue and not a fern but turn red on midsummer but it's important to say ferns do not have flowers at all.
Some believe that carrying ferns will help you find the treasures and some hung dried ferns in their homes to ward off lightning.

Also if you stand on the magical fern on Midsummer it could lead you to the fairy world. 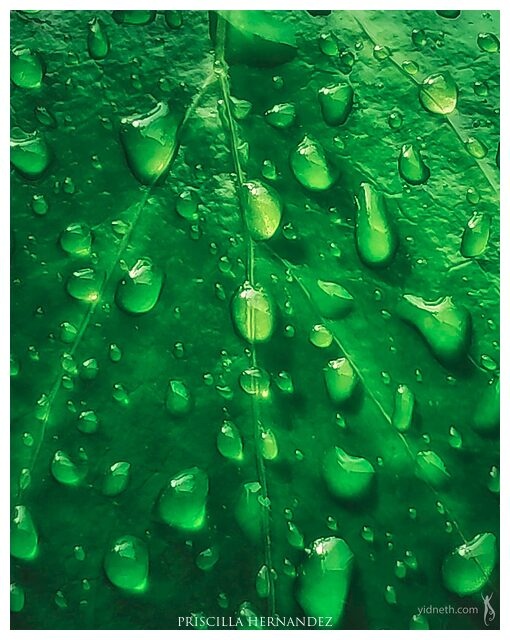 Collecting Morning Due during the shortest night of the year can also provide magical properties that appear recurrently in many countries Midsummer celebrations. The morning dew of Midsummer is said to have healing properties. In Portugal, it is called water of virtue and flows from fountains just before sunrise.
ps. Water is the source of life. It's not raining enough where I live. So these little droplets are magic and a blessing indeed.

Among all celebrations one of the oldest is LIGO that honours the Latvian celebrations of Midsummer. During this celebration people gather in massive choirs to sing traditional songs called Dainas which are declared UNESCO culture heritage treasure. These are very old pagan songs that often mention "Goddesses" or "Mothers". I recorded it in honour my friend @lindahas and shared it some time back but as it's TODAY, I share it again now as soundtrack of this post as Līgo is precisely today, the night from the 23 to the 24 of June. This tradition includes bathing in the creeks and lakes, wearing a floral garland, worship Nature and the gifts it provides and I'm no Latvian but Spaniard but I found out most of my personal rituals and ways to celebrate this time of the year felt close to it.
In some parts of the country a "Naked run" takes place ;-) 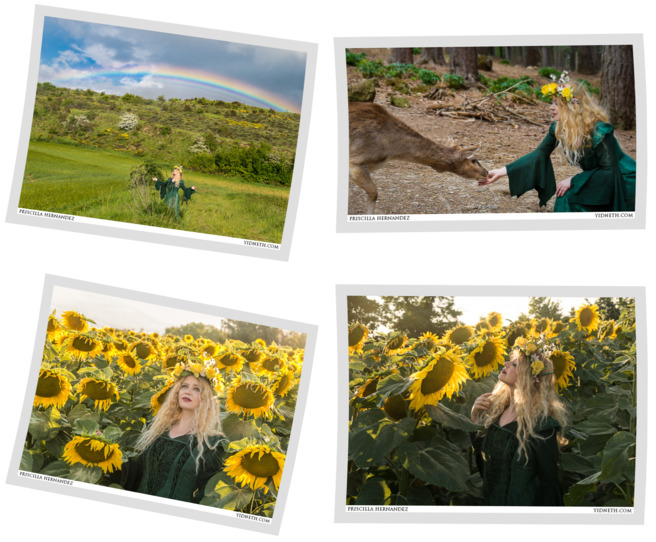 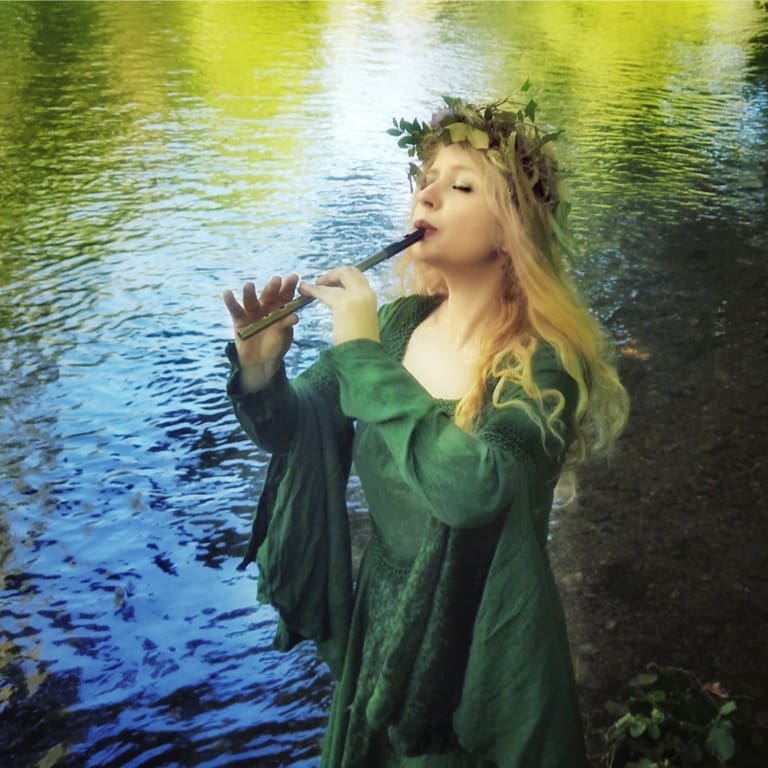 May you have a magical night

Wow. This is just so beautiful and educational, too. Thanks for the lessons. It is amazing what one can learn in a short post.

Thank you for reading, and listening the store ng uf you have May Earth provide a bountiful harvest

Thank you for the explanation. I'm in Spain too and at the moment I can hear fireworks everywhere. Sadly I cannot take good pictures, it's a bit far. But let's celebrate summer! Yes, that is the reason. I am not a big fanof fireworks cos they scare animald bir indeed it is a day to celebrate summer welcome in many ways Enjoy my country 🌞

Love all the information you post about the various special days. Summer Solstice is one of my favorites.

Blessed solstice... And glad you found it interesting. Yes, light and green and the promise if the fruits of earth

What a beautiful and informative post.
Thank you for sharing all this beautiful information with us.

Midsummer is called Juhannus here and seems like in so many places there are similar traditions, bonfires, flowers and magic in the air.

One of the most known midsummer ”spells” for unmarried women hoping to find a husband is to gather seven different wild flowers, put them under the pillow and then you’ll see your future hubby in your dreams.

Happy mid summer you magical being!

Hope you had a magical night. I knew of that too cannot recall if I mentioned or should edit it in. It is also recurrent. It is a time of fertility of earth. Thanks so much for sharing. Did you celebrate?

We are celebrating all weekend here, and we got so lucky with the weather, it’s super sunny and warm. It’s not unheard of to snow or be sub zero during mid summer, and heavy rain is basically normal so this is a total treat.

Aww I really want to be in “La Noche de San Juan”!! I love Spain! Amazing shots, pretty powerful, and I love the fact that it seems to be from a fairytale landscape!

Thank you. when I lived in Canary Islands I used to go to the beach at night and people would have bornfires but now I am more inclined to a magical time alone in the woods

Had no idea there are so many traditions! But summer is definitely the right season for many activities!

And so many more I haven't even mentioned I feel tempted to extend the post. Thanks for reading

We celebrated the last day of spring as the longest day of the year. From now on, each day would be slightly shorter than the previous day.

Wow, this sounds interesting, I wrote about this celebration, in Romania it's called Sânziene,it's really magical💚🧚🏼‍♀️

All are North if Spain, thanks

Watch out for the human traffickers at hivefest. You wont know it until its too late. STAY AWAY! Beware, traffickers can be women or men! They will act nice until they dont. There is human trafficking going on around this type of crypto. I have witnessed it. They literally have attempted my murder and are trying to kill me with V2K and RNM. Five years this has been happening to me, it started here, around people that are still here. Homeland security has done nothing at all, they are not here to protect us. Dont we pay them to stop shit like this? The NSA, CIA, FBI, DHS, Police and our Government has done nothing. Just like they did with the Havana Syndrome, nothing. Patriot Act my ass. The American government is completely incompetent. The NSA should be taken over by the military and contained Immediately for investigation. I bet we can get to the sources of V2K and RNM then. https://ecency.com/fyrstikken/@fairandbalanced/i-am-the-only-motherfucker-on-the-internet-pointing-to-a-direct-source-for-voice-to-skull-electronic-terrorism ..... https://ecency.com/gangstalking/@acousticpulses/electronic-terrorism-and-gaslighting--if-you-downvote-this-post-you-are-part-of-the-problem if you run into one of them you may want to immediately shoot them in the face. 187, annihilate, asphyxiate, assassinate, behead, bleed, bludgeon, boil, bomb, bone, burn, bury, butcher, cap, casket, choke, chop, club, crucify, crush, curb, decapitate, decimate, deflesh, demolish, destroy, devein, disembowel, dismember, drown, electrocute, eliminate, end, euthanize, eviscerate, execute, explode, exterminate, extinguish, finish, fry, grind, guillotine, gut, hack, hang, hit, ice, implode, incinerate, kill, liquidate, lynch, massacre, maul, microwave, mutilate, neutralize, obliterate, off, pop, poison, punnish, quarter, ruin, shank, shock, shoot, shred, skin, slay, slaughter, smoke, smother, snipe, snuff, squish, stab, strangle, stone, suffocate, suicide, SWAT, swing, terminate, torture, terrorize, whack, waste, wreck. You better fucking kill me.