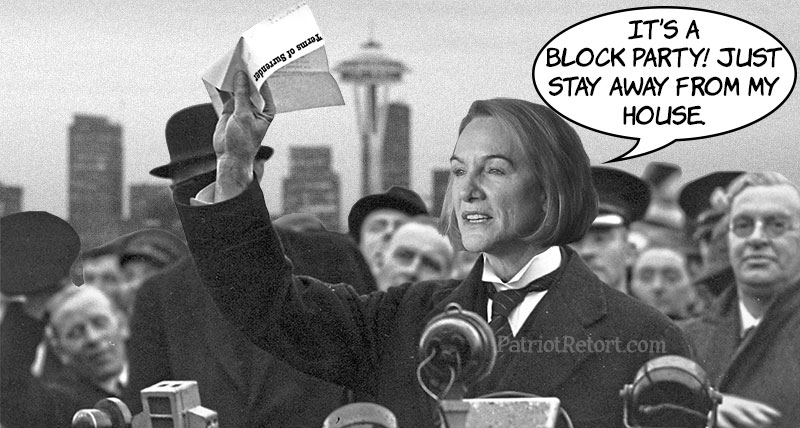 Boy, the worm sure has turned for Seattle Mayor Jenny Durkan, hasn’t it?

Seems like only a few weeks ago, Durkan was bubbling with eager excitement over the armed band of weirdos who took over downtown Seattle. Like an over-indulgent stage mother, Jenny gushed about this “new summer of love” while chiding President Trump for being afraid of “democracy.”

There’s a reason I photoshopped Jenny Durkan as Neville Chamberlain.

Jenny Durkan meets the crocodile
Like Chamberlain, Durkan is an appeaser.

And as Winston Churchill famously said, “an appeaser is one who feeds the crocodile hoping it will eat him last.”

Well, this past weekend, the still very hungry crocodile turned up at Jenny Durkan’s house looking for a meal.

And the same Jenny Durkan who squealed with indulgent delight as that crocodile devoured her city, is stunned to discover that she and her family are now on the menu.

To make matters worse, Communist Kshama Sawant, the city council member who in early June unlocked City Hall and let the mob march right in, was the same person who led the mob to Durkan’s front door.

It’s hard not to feel a certain sense of Schadenfreude over Jenny’s gullible appeasement biting her on the ass. Against all common sense, she fed the crocodile. And in a move that shocks absolutely nobody, except apparently Jenny Durkan, the crocodile is now coming for her.

I know I’m mixing my metaphors here, but this is what happens when you let the wolves through the gate.

Durkan should’ve known eventually they’d come for her. But her attention was elsewhere. Like so many other Democrat politicians, Jenny was instead focusing on increasing her public profile by attacking President Trump.

Is it any wonder the fool was completely unprepared for the inevitable?

The Mayor’s office released a statement , and in it attempts to thread the needle by continuing to appease the mob while simultaneously condemning the mob for threatening Jenny Durkan and her family personally.

“Seattle has a long tradition of peaceful protest and advocacy for progressive change, and Mayor Durkan strongly supports those rights. Mayor Durkan will continue to listen to leaders in Seattle’s Black community. She is working hard to translate the calls for change into real, tangible systemic changes to policing and all the other systems needed for strong and healthy communities. She has prioritized these as Mayor, with investments in housing, education, youth opportunity, and economic equity. She proposes investing an additional $100 million into the Black community.

Yeah. That whole paragraph reads like a politician’s version of this:

The statement went on:

Mayor Durkan and her family are in the state program to keep their address confidential because of the death threats mostly related to her work as Seattle’s U.S. Attorney under President Obama. Instead of working to make true change, Councilmember Sawant continues to choose political stunts. Tonight she did so without regard for the safety of the Mayor and her family. The Mayor was not even home – she was working at City Hall. Seattle can and should peacefully demonstrate but should not put families and children at risk.”

Hey, Jenny. Are your children the only ones that shouldn’t be put at risk? Are you unaware that two children were shot at your “summer of love” “block party” over the weekend? For nearly a month, “families and children” have been at risk while you bent over to the mob, sucked up to CNN and tried “owning” Trump on Twitter.

Now, I realize it is human nature to not care about stuff that doesn’t directly impact you or your family. But Jenny Durkan isn’t just some random citizen of Seattle; she’s the freaking Mayor. It is her job to care about what impacts the residents of her city.

And in that regard, she is an utter failure.

Worse still, her family’s brush with the crocodile has taught her nothing.

Read those mealy-mouthed words again. She still doesn’t get it.

Councilwoman Sawant isn’t engaging in “political stunts;” she isn’t looking to score petty political points. The woman is a Marxist, for crying out loud. She is fomenting an insurrection. And if your statement is any indication, Sawant isn’t going to face much pushback on her way to the Revolution. 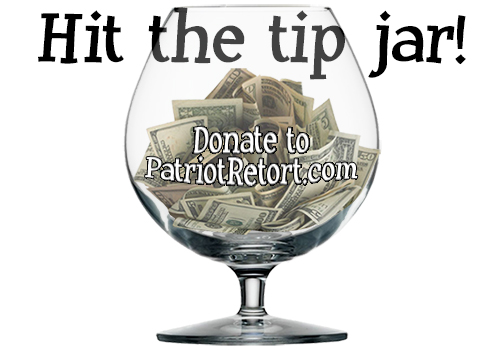