Venting from a logical perspective

I heard of a case at Edwards Hospital in the Chicagoland area where a person was on the brink of death. The doctors said that he would not live more than a week due to Covid. The family requested one of the other drugs as a last ditch effort, HCQ or Ivermectin not sure which.

The family had to take the hospital to court and a judge had to rule that the doctor must prescribe it. Within a day the patient was feeling better and within a week he was back at home. I thought, "Wow, what an amazing story." But then again, it is just one case and the hospitals are going to continue to prevent people from getting better. They are just going to cause death rather than prevent it (Echo... Above all, do no harm, harm, harm...).

Today I hear of another case in Virginia where the same thing happened and the Hospital was forced to pay $10,000 per day for each day they do not comply. I assume they are complying, but the point is *We should not have to find a diagnosis on Telegram and then sue the doctors in order to force them to prescribe it!

That is like a mechanic holding your car in the shop because you refuse to drive away with brake pads made of Jello Brand Gelatin! Yes, Bendix brake pads have worked fine for over fifty years but now the mechanics are being ridiculed by the Jello company if they let people have friction material stopping their cars.

I will not be entering a hospital under any circumstances. The people that work there have all lost the ability to think scientifically (or even statistically).

There is something else that is grinding my gears on a world wide scale as well, let's call it the flip side of the coin...

The kill shot has Emergency Use Authorization, which means if someone is in the exact situation described above, they should get the kill shot from Pfizer or one of the other untrustworthy mega-chem companies. But here we have everyone getting it as if it were the latest fashion statement!! Topsy and Turvy have found a home! It is called Planet Earth - Sheesh.

And still we have people lining up on both sides of the line getting ready to face off - the self righteous who are dying in droves, all doing their part to keep others safe by taking the kill shot . . .

Vaccines have always protected only the injectee in all of history - kind of like the reliability of Bendix brake pads - neuron goes clunk an the bottom of an empty skull.

. . . and those who are waiting for the minimum limits of informed consent to be reached in order to even attempt to make a decision on the kill shot

As if the name kill shot and athletes dropping like flies from heart attacks on the field is not enough to seal the deal.

When two sides are irrevocably opposed by propaganda and logic (or whatever insane differences) for a long enough time and both will not give up their belief system, invariably there is a war in the cards for both sides. Countries need only declare their support for one or the other.

Or maybe this one is a war for the minds of people and it will be won or lost in the streets. 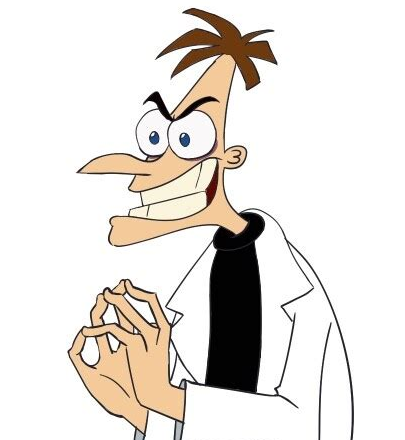 I theorize that the graphene oxide in the kill shot is able to perform a task on command, as nanobots have done for many years, and will be able to be activated in all the vaxt people that have not died from it. And even if they find out the truth, they will have to do what Heinz Doofenshmirtz says or he will cause serious pain for resisting.

I sense a monologue brewing from Claus Schwab (sp?)

Fifty five years from now when Pfizer releases their testing and methods, I will attempt to read the informed part of the 'informed consent' that I have always had as my right. I am pretty sure that the war will have already taken place by then.

Remember, only the last two paragraphs are in the realm of theory as stated.

See you when it is over. Doof image

Hitler wanted death camps for all the Jews - Covid wants them for all in need of a medical attention. Hitler used gas. Hospitals use remdesivir and 'ventilators'.

Thanks! Fast and accurate information. I have been watching some scientists from Spain who are analyzing the vaccines using the scientific method. Nanobots proven.