@steemincome 64
about 1 year ago
Splinterlands 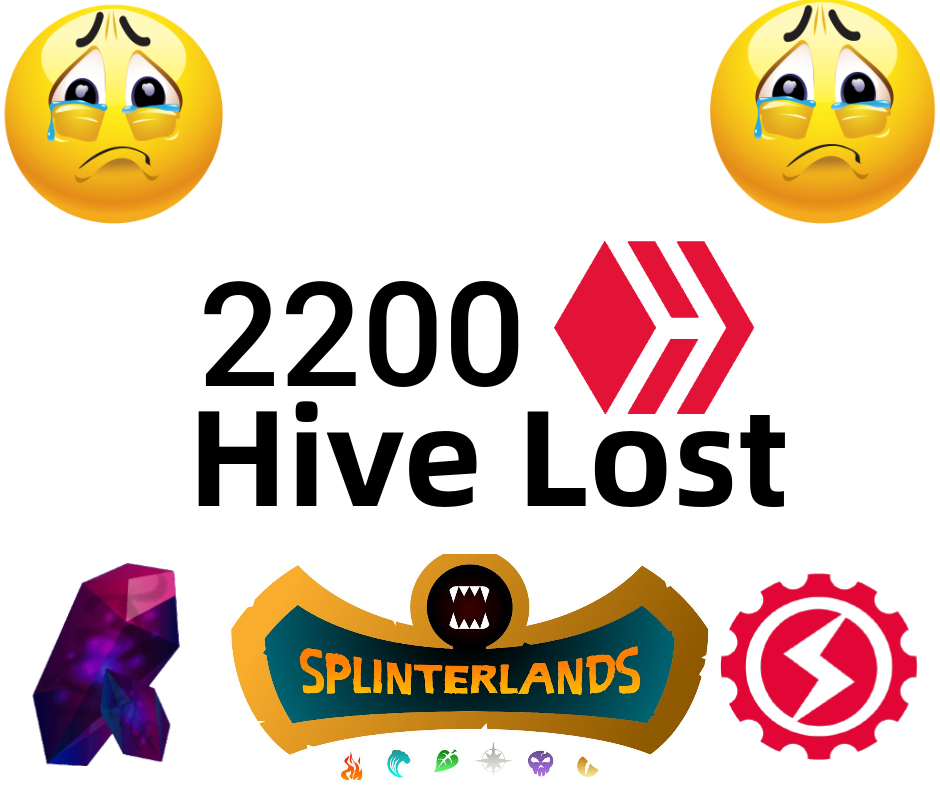 Today I am here to share the biggest loss of my life which I have got in the last fifteen days. Which was started with the pumping of the hive.

I am in the field of cryptocurrency for the last 5 years and never saw any pumping in any coin like that which is happening in Hive these days. I never expected that the hive will be pumped with this type of speed. I had invested all of my earnings on these coins which I talked about in the last paragraph.

The hive was pumping on the monthly basis so I was relaxed that now the hive will be pumped again in between 1-10 December but they started in the middle of the and all of my hives were lost because whenever the Hive rise all the altcoin on the hive-engine die like happened this time.
I had invested my hive in Dec about 88k at the price of 0.018 Hive, 50k at the price of 0.014 hives, 220 hives on Chaso when they were at the price of 20 hives, Was earning some SPS in return which I had staked to earn vouchers and more SPS when they were at the price of 1 Hive.
Suddenly the hive has started pumping up and all the coins started going down and in just a week and a half all of my investments lost their price and I just have left 1500 Hives. The only problem is that 2100 Hive from them was not mine. I have borrowed it from someone else and lost everything, Now I have to return the 2000 hive to that guy as he has given me. I don't know now what will happen next.

I Am Just Depressed But Thanks For Visiting My Post

God bless You All - Have a Nice Day.

The great thing about hive is that you can earn it all back over time. I rescued my 2017 losses just by posting and interacting with the community.

It's tough to see now, especially in the short term and borrowing, but you actually have lost nothing. It just seems that way.

You only lose if you sell and try and chase the gains somewhere else.

Just be patient and trust in the community. Over time you will much more have than you spent and even at lower prices it will be worth more.

Yeah buddy I am just waiting till the time when the pump will stop because it will allow us to cover all the loss.

Yeah, not sure how I feel about the price. I certainly wasn't ready for it to take off.

I'm actually the same. I had been buying DEC and SPS these past few months when Hive was trading at $0.700+ range in preparation for the Chaos Legion pack general sale. And considering that Hive is currently trading at $2.8+, I actually lose out a lot. If I weren't in such a rush and sold my Hive today, my current DEC and SPS holdings might be tripled of what it was now. I admit it was a little upsetting but upon thinking that prices should return to normal once the pump is over is enough to calm me down a little.

Once the pump will over it will only take two weeks to double my hive because the dec and all the other coins will come back to the normal price. now if on the current price I'll buy back the dec it will triple my hive but just have to wait till the pump will end because it looks like it will stop at 6-8$ which means we all have to wait too long but let's hope for the better tomorrow.

Yeah, let's hope for the best.

Man, that sucks. But if you were able to trade successfully on Hive-Engine before, I'd keep trying. Perhaps with smaller volume.

That was the easiest and highest earning for me. I just invested 15 hives and earned 1200-1600 Hive in two months and then I borrowed some Hive from a friend with the deal of the 5% profit a month. We were earning a good profit but then suddenly that pump came in the game and I have listed more than 60% of my earning and also returned the friend's Hive because it was a good time for him to earn the profit but unfortunately I was able to return 1500 hives only because those was the all I had left:(

I made this post so might be a whale can support me and I can reinvest and can earn some good profit but I didn't know my bad luck is still following me but not a problem a good day will come back.