Do some of that Pilot $hit 🛩️ Mav!

Yeah, I am a real pilot but it is really hard to rent a plane here in the land of devalued currency. So I fly a bit using a simulator that my youngest clone suggested to me. The word "pilot" can mean anything, so let me be a bit more specific. I am certified to fly planes that have a single engine and operate on land. I am not IFR rated which allows me only to fly in clear weather, day or night. 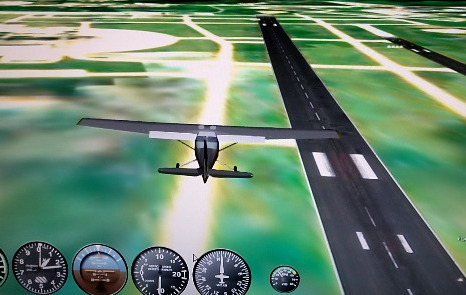 I want to show you a couple of things today. One, this plane in a 36 knot headwind will land like a helicopter. You end up fighting to move forward enough in order to even get to the runway. When you get over the runway, you then land, with full flaps, at less than one mile per hour.

Second, the crosswind makes you line up to the side of the runway on descent so that by the time you are low enough to touch down the wheels will have the runway under them. In other words, you are blown back over the runway while descending. In a real plan, you would also have the option of "crabbing" on the way in, then using the rudder to rectify the sideways motion.

The simulator has two or three things that are a bit off when compared to a real plane. The one I chose on the simulator is the real plane in which I have logged hundreds of hours. The simulator has the speed at which the plane lands off a bit. Also, cross wind landings need separate rudder and roll controls, as mentioned above, which is not possible as far as I can configure.

I did a couple landings and the video is less than ten minutes long. This is the plane I learned on, a Cessna 152, but I am thinking of seeing what I can do on other kinds of aircraft without training. Let me know if you want to see me learning by trial and error. I am thinking - commercial jet.