We are happy to announce that exactly three months (90 Days) from now, we will do the snapshot of Hive and Hive Power Balances. In this claim drop, Hivers will get a one for one drop of LARYNX Miner tokens. More information in this extract of the SPK Network Light Paper:

A one-time HIVE wallet balance blockchain snapshot shall be taken at a specified date and time. There will be a 90-day countdown prior to the snapshot. The claim drop of LARYNX Miner Tokens is once per month, each month to HIVE and HIVE Power holders. Users will have to log into the Speak Desktop App each month to claim their monthly balance.

More info about the SPK Network:

The SPK Network is a decentralized Web 3.0 protocol that rewards value creators and infrastructure providers appropriately and autonomously by distributing reward tokens in such a way that every user, creator, and platform, will be able to earn rewards on a level playing field.

First app on the SPK Network:

Great news and now count down is on.

I bet we could count up and still get the same result.

could you please specify at what moment the snapshot happens? (Block height, time)

will i get 1 liquid larynx for 1 illiquid Hive power?

Just wondering about the first claim drop. Surely somebody will bot it with 100 accounts holding 10 hive each?
Is there something to prevent this from happening or a way to make sure that real accounts are eligible for the drop?

Same concerns for the first airdrop.

Hey @niallon11 and @khan.dayyanz. We had the idea to do a small claim drop, but we have reconsidered this because, at this stage, there is no advantage of getting a small number of tokens out early.

Only the main claim drop will happen. To avoid confusion, we have edited the post.

Gotta keep stacking that HIVE! This things gonna be amazing and I can't wait to bring in some content creators to the space. They will be starting soon just to get their feet wet and understand the platform while getting ready for the explosive growth 3speak will see!

Time for people to buy some more.

Regarding the first claim drop:

This claim drop will last for 3.3 days and be available only for the first 888 accounts that claim

Could this be a bit more explained? Why 888 and to whom do these accounts belong?

Hello @tobetada. We've reconsidered the first claim drop. Only the main claim drop will happen. At this stage, there is no advantage to getting a small number of tokens out early. We have edited the post to avoid confusion.

I had the same question, thanks for raising it! !PIZZA

cool cool, I am getting ready for it.
-Question, what if I´m delegating HP to anoother account, who gets the tokens ?

should be you as you actually hold them

Delegation does not affect ownership.

You will get the LARYNX for HP (along with liquid HIVE) you hold. Delegated HP is still yours.

thanks for the information

will swap.hive be a factor?

I think that would be a question for the Hive-Engine team. I would hope that they will pass on the tokens that were dropped to them (as their account hold the Hive)

What's the speak desktop app please? And can I claim it with my mobile phone?

thanks for this answer, it was useful to me too

Great question. I was wondering that myself. My account is small (and growing).

I do some Hive that was delegated to me so I wondered if the generous folks who delegated those tokens would have to undelegate (is that a word?) them to maximize their snapshot. Glad to see @taskmaster4450le's response.

He told me that the HP owner gets the tokens

That makes sense. Glad for the clarification. Cheers!

Sweet. Looking forward to it.

I downloaded and opened 3Speak-app-Setup-0.1.13.exe and installed, but when I go to open the program I get a quick empty whit box, and then nothing, like it auto closes. I use windows 7, and avast anti-virus, (it passed the virus scan), and the browser in use is chrome. Is there something other than download and run the file I need to do?

Open the app and hit the full screen box in the upper right.

I found that gets rid of the blank screen when the app is in reduced size.

No idea why it does that but is seems to happen each time I update the app.

Thank you I had to go into properties and setting it on open in maximized window, it stayed up a little bit longer, but as soon as I went back to my browser while it was loading it shut down. I'll keep trying and if nothing else I can download it to my non-trusted laptop (win10) and see if it works there.

I got the Windows 10 SmartScreen from Windows Defender on W10. Installed anyways because I trust on 3Speak but got a white screen.

Guess that tells me about win10 issue, sounds like what I am getting.

The initial claim drop will happen several weeks prior to the main LARYNX miner claim drop (Claim drop 2 below). Users will log into a claim drop page on the Network website and prove that they are the owners of their Hive account. Users must have a Hive balance of at least 8 HIVE to be eligible to claim. This claim drop will last for 3.3 days and be available only for the first 888 accounts that claim. Each account will get an equal amount of the LARYNX Miner Token.

1.- It doesn't make sense. What do you expect to achieve doing that?

EDIT: Ok, I just see in other responses you won't be doing the initial claim drop.

The claim drop of LARYNX Miner Tokens is once per month, each month to HIVE and HIVE Power holders.

2.- What about delegated HIVE POWER?

HP is still yours even if delegated.

Users will have to log into the Speak Desktop App each month to claim their monthly balance.

Is there a TLI5 step-by-step for this?

What about people who do everything mobile?

This claim drop will last for 3.3 days and be available only for the first 888 accounts that claim.

LOL. I think all of the Starship Trooper sequels fit somewhere in there too.

It's at the bottom of the post but here you go:
https://github.com/3speaknetwork/3Speak-app/releases/latest

Which of these is the app ? 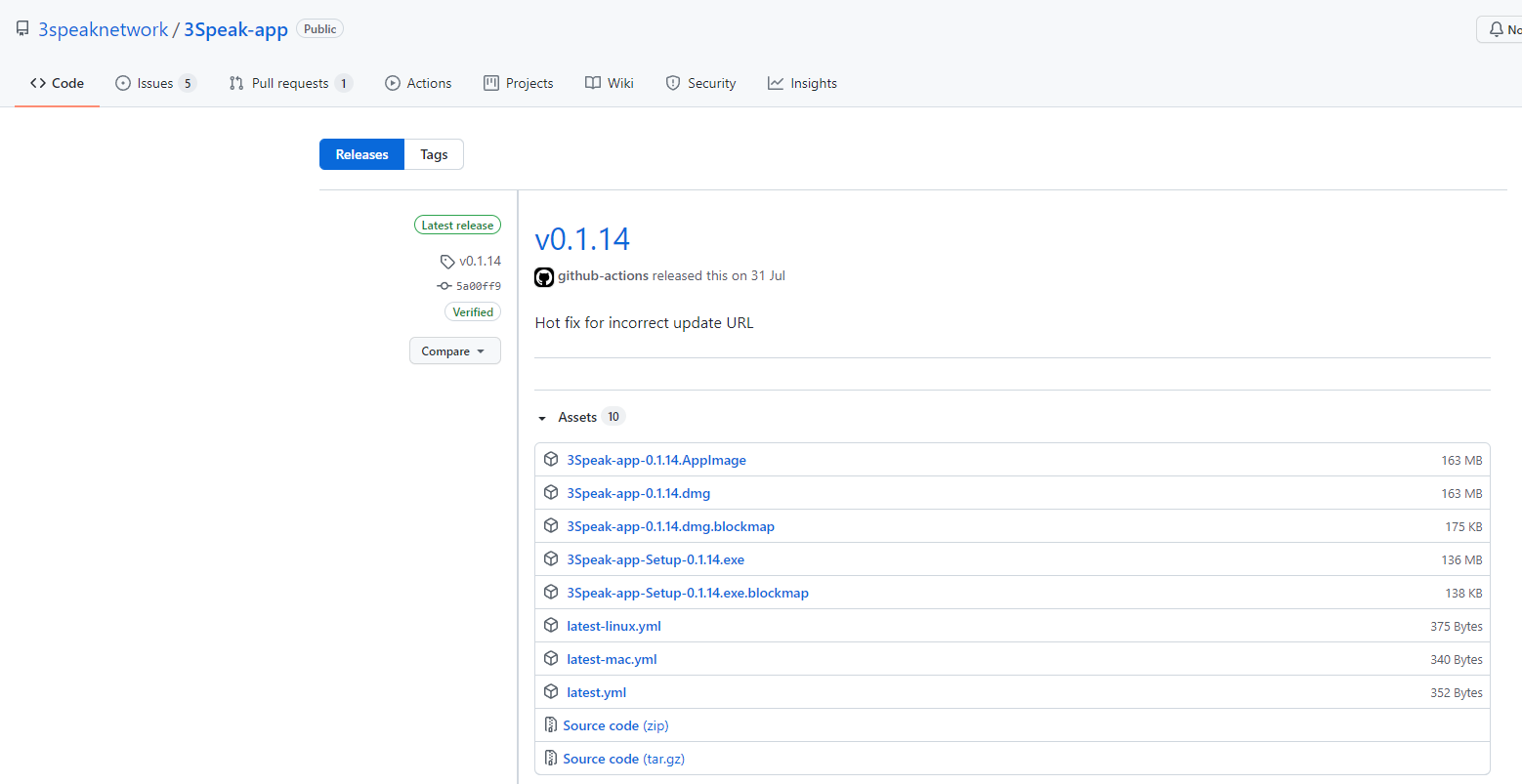 I just thought so...thanks a ton!

Nice, enough notice for a real IPO for once, this might be the first project on hive i dont think is laughable. I am impressed, thank you for the notice and I will be there.

Many thanks for the Pizza @hivetrtending and @pizzabot!

Will Hive dollar be considered for the airdrop? Cos I did not see anything about HBD and some of us hold HBD.

Will the token be Listet somewhere?

And looking forward to hanging out on Tuesday, get ready @taskmaster4450 is going to have a TON of questions lol

First question: are we on VIMM?

Congratulations @spknetwork! You have completed the following achievement on the Hive blockchain and have been rewarded with new badge(s) :

Can I claim it from my mobile phone?

Congratulations @spknetwork! Your post has been a top performer on the Hive blockchain and you have been rewarded with the following badge:

The SPK Network is the most exciting project on HIVE and my greatest motivation to hold on to my HIVE and get more.

I have no clue how to actually download the Desktop App. I don't know where to click on the Github site. Any tips?

download the binary for your OS or compile from source: https://github.com/3speaknetwork/3Speak-app/releases

Thanks for trying to help me out, I still am unsure honestly what to do but perhaps in the future it will make more sense.

What do I click on? lol I clicked the (zip) one about a month ago, wasn't much success. All good, just confusing to me.

Just pick the package for your OS:

This is a great news, the world of information will change a lot.

So we can only claim token each month through the desktop app and not through mobile?

Wow this is so amazing can’t wait to see 😂😂😂

The work in progress toward the snapshot can be seen here https://gitlab.com/PBSA/3speak-integration/-/tree/wip-snapshot

Awesome! Can't wait for it guys!

Not a chance to miss, as i don't have more hive. Lol

Looking forward to this so much!
Can’t wait to be a part of this!!!

I was able to download the desktop app but not able to switch between my two Hive accounts once I had them both in the app. So do I need to log out of one and log in to the other each time? Looking forward to using the app to see how it works and of course the Airdrop.

If a project as big as SPK on Hive gets hacked/compromised, will it kill the Hive ecosystem? How many of us can read Solidity in these contracts and get out all the agreements we're making everytime we sign?

At some point, it's just a matter of time :(

I tried to install the dmg on my Mac, but got this. Then I control clicked to open, but the program crashed right away? What's the best way to get this to run on a Mac? OK thanks, I will check it out.

I got it working with the latest Mac update!

A one-for-one drop of LARYNX Miner tokens to HIVE holders will revolutionize the entire blockchain. After the SPS airdrop the LARYNX Miner claimdrop will be earthquake crypto rewarding those invested here. 2022 will be a year you simply cannot imagine!!!

How does the monthly airdrop work. Is the snap shot of our HIVE holdings divided into X months and dropped each month or is a new snapshot taken each month and we get an airdropped amount based on our new HIVE holdings?

I'd also like to know the answer to this!

Can you guys confirm if HIVE on hive-engine is eligible for the claim drops?
Also a countdown post would be nice. I've seen them quite rarely, but I think Marky had a countdown post for the hackathon.
Thanks.

great so I will start staking my hive

Why not also count HBD in this? Would it be possible to add in HBD held?

Not seeing the solution for getting the 3Speak app to work. On PC. Win 10. Downloaded .exe, but when I try to run the program a window pops up briefly and then disappears. Any help is appreciated!

My accounts is very small want to know if its eligible, and if yes, how i can do to claim pls sir