@soehada 65
about 2 months ago (Edited)
Fascinating Insects
Hello Guys ... How are you today ? 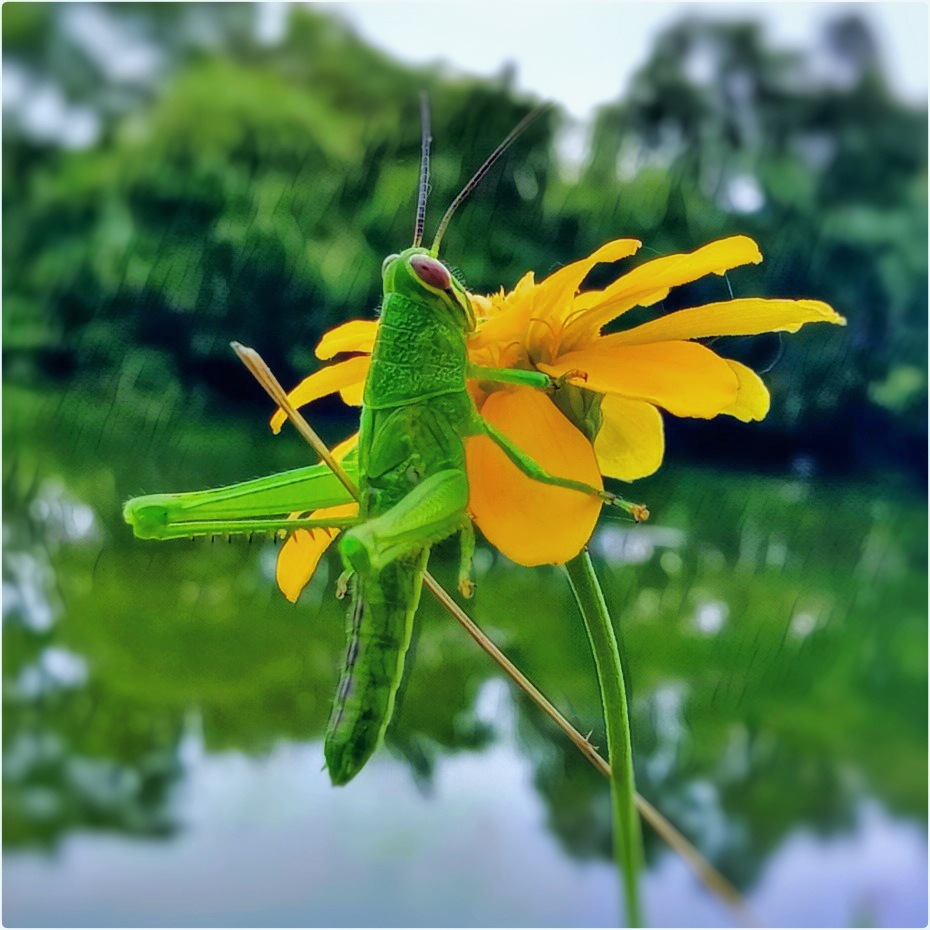 Still remember the term herbivore (plant-eating) which is an attachment attached to the group, so that farmers are often hostile to it, because its presence can damage leaves, either rice plants or other plants, it comes from the suborder Caelifera in the ordo Orthoptera a term that is often pinned on by biologists for their families.

However, why am I very interested in it myself? Because he has one of the unique things in his body such as the completeness of a pair of antennae with a size smaller than his body posture, of course the two pairs of antennas have a very beneficial function for him. 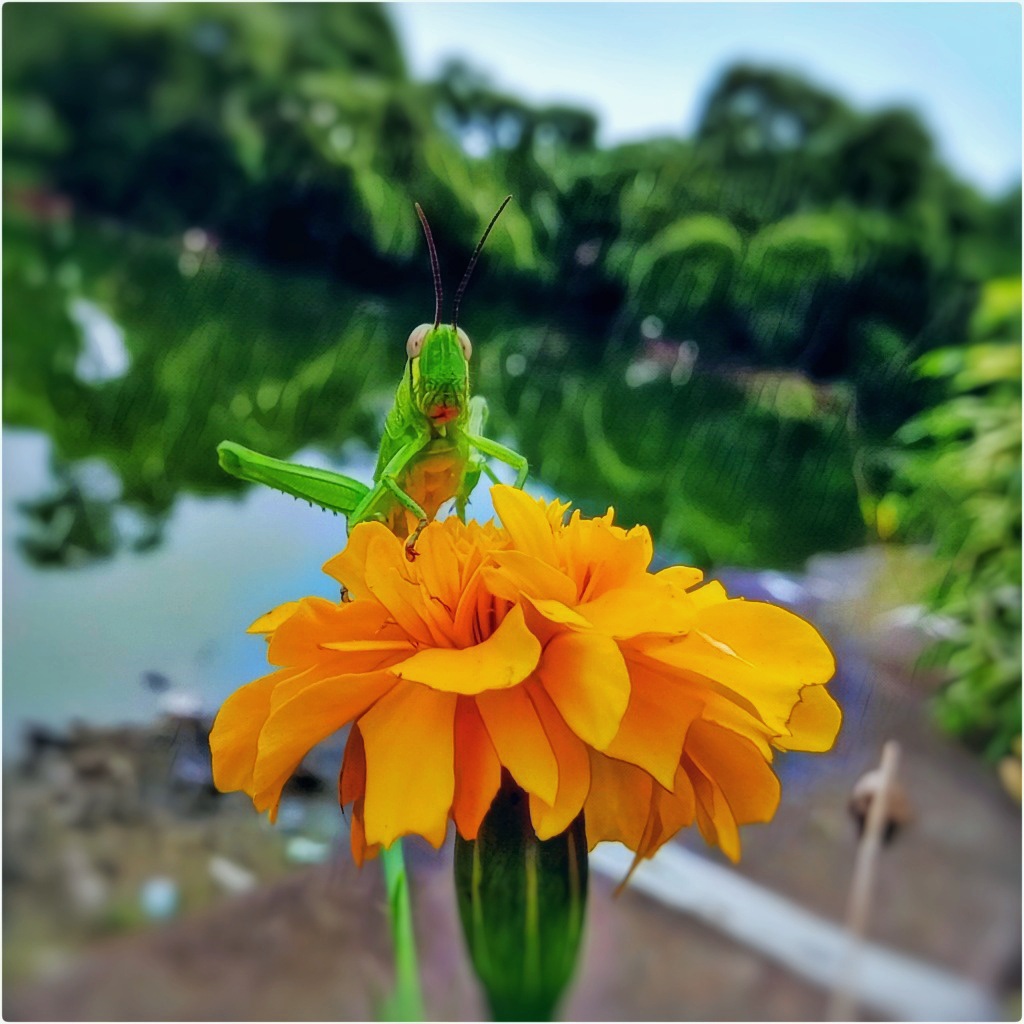 In simple terms it can be interpreted that the function of the two antennas is to catch any signal coming from outside parties or even from their own group.

Every signal that is captured is then understood and automatically processed instinctively and then concluded whether the signal is an invitation or something else that is considered important for him and his group, then conveyed in their own way, so that important information can be received by the parties concerned. 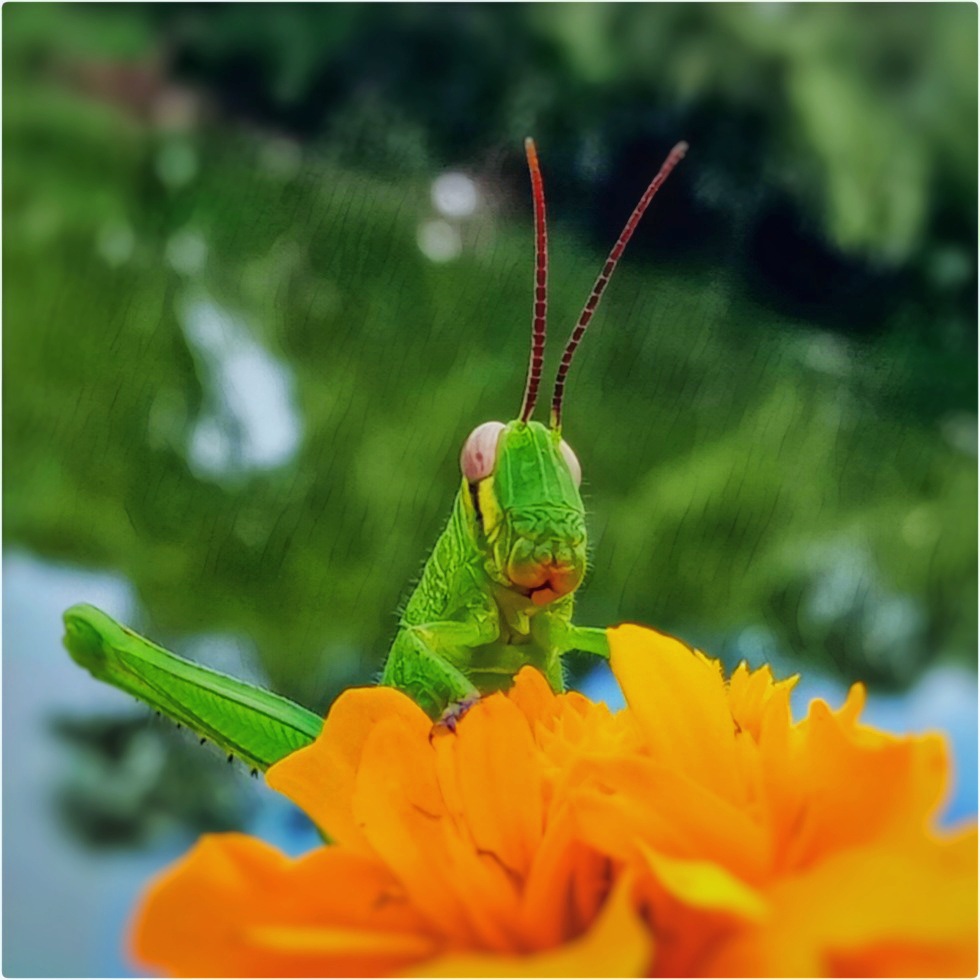 But I myself am very surprised and very rarely see the presence of grasshoppers in inappropriate locations, whether in small quantities or these grasshoppers leaving groups or generations so that they are seen in one of the flower plants that are rarely visited.

Because the flower plants (zinnia) that grow on the banks of the river (Pusong reservoir) do not have many leaves, most of these plants are identical plants with petals not leaves, while grasshoppers will make new nests when they meet plants with dense leaves. Such as, kaffir lime plants, coconut plants, or some other plants with denser leaf capacity. This shows the dominance of plants with these characters. 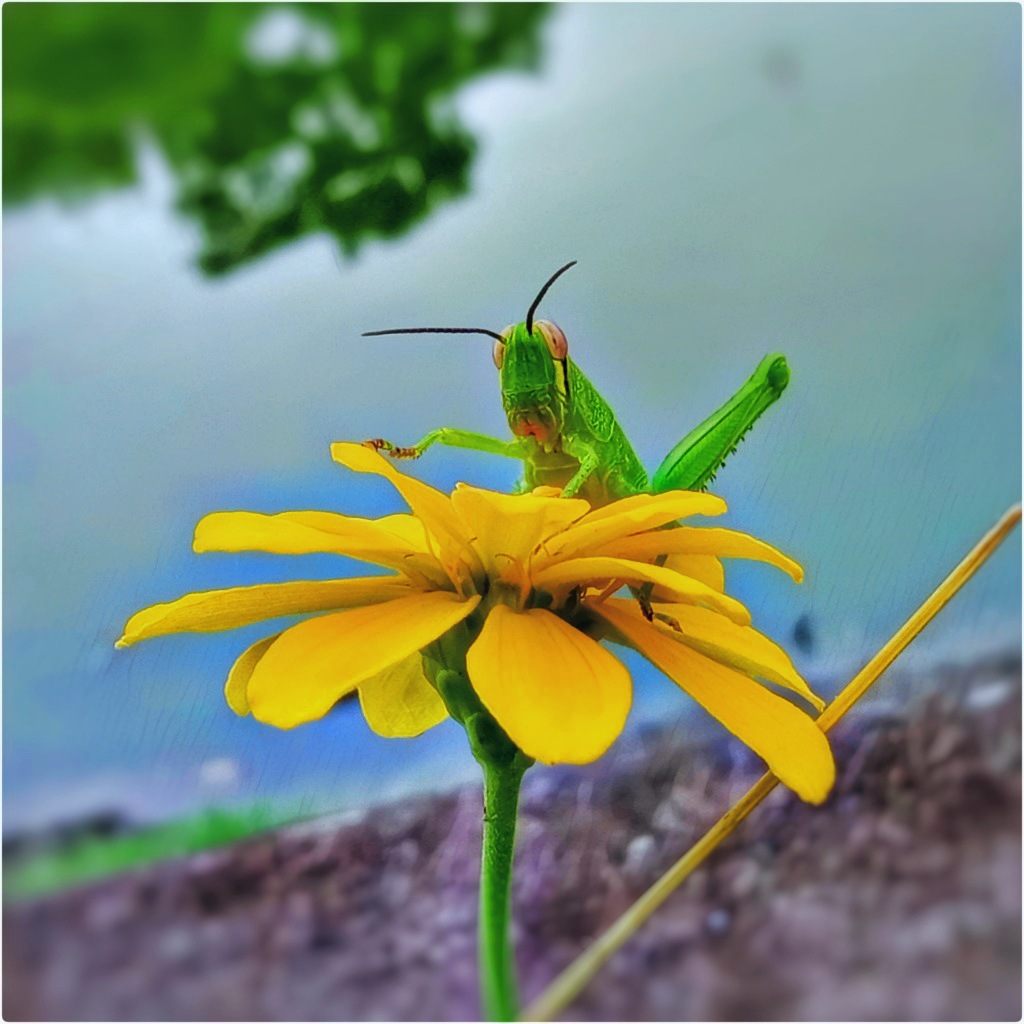 This phenomenon often occurs when young grasshoppers are disturbed or disturbed in their native plants, this is caused by several conditions that make them uncomfortable in a situation, or there is also a strong wind so that their tiny bodies are carried away by other leaves so that they arrive, or they are stranded in a new location.

So don't be surprised if there is a phenomenon between young grasshoppers and zinnia plants growing around riverbanks in our area, with young grasshoppers looking confused with a new location. This is very appropriate, because in our area, at night there are strong winds and rain, while some other plants are pulled from their roots or where they grow so that many species of insects, lose their nests. 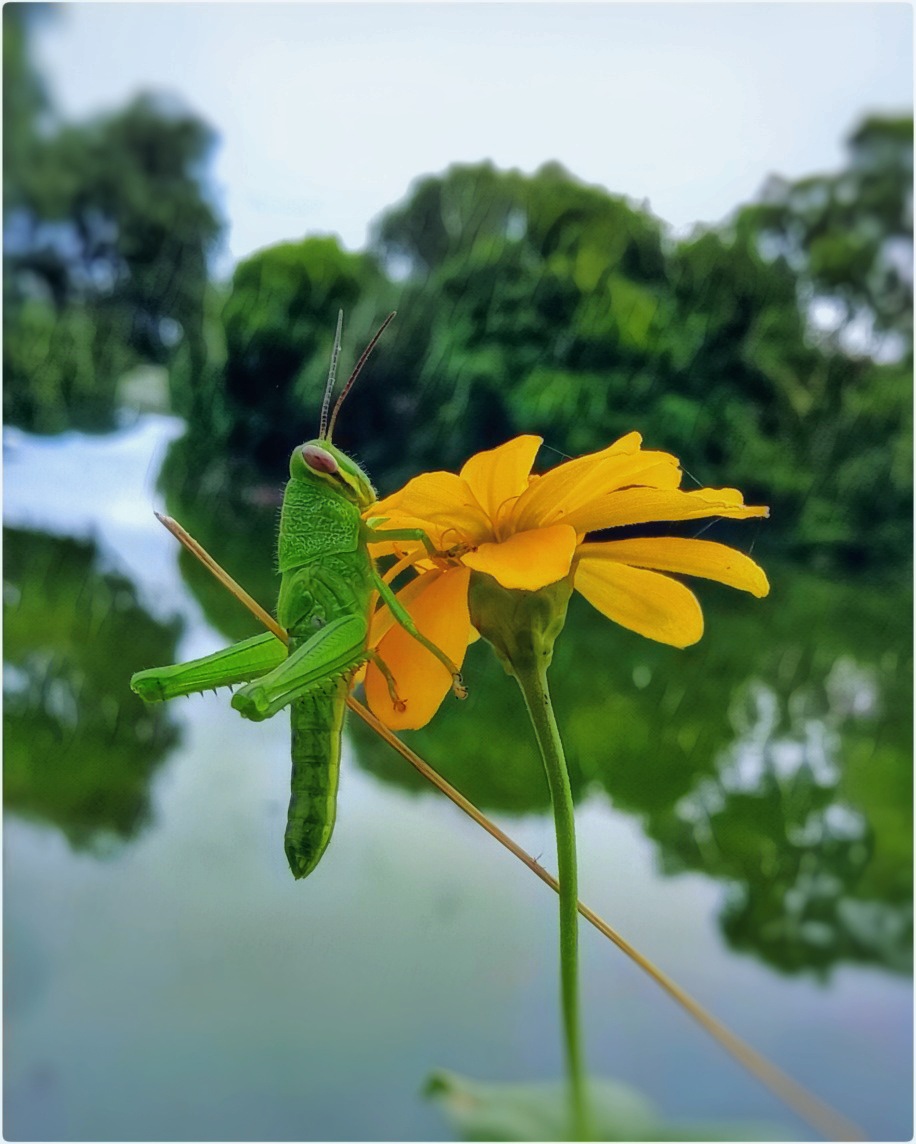 Seeing such a situation, a new question arises for them (young grasshoppers) whether they will open a new nest? Or they are not able to continue the next civilization like their parents. 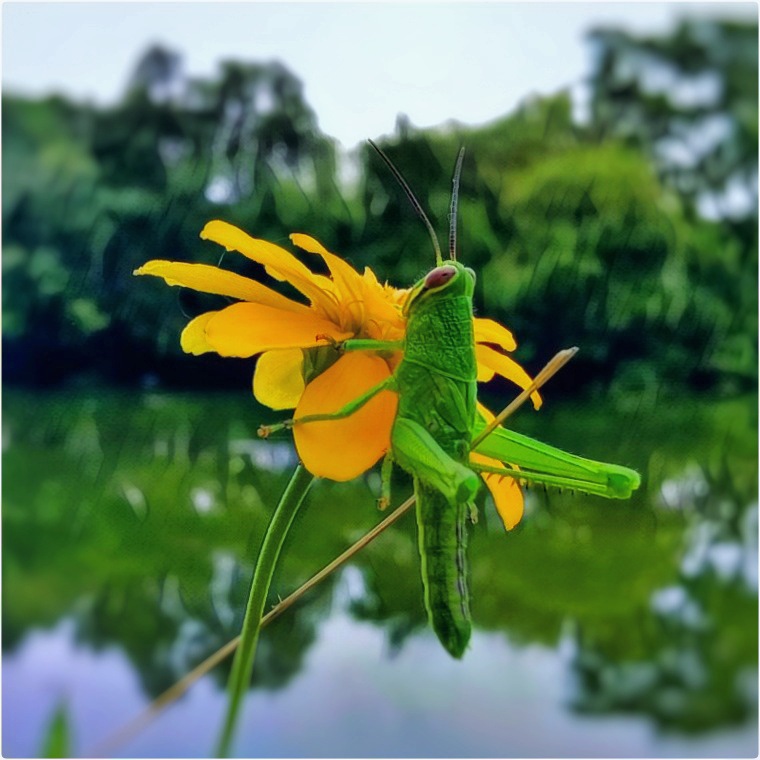 Circumstances or questions above, you yourself are able to answer logically on your own, by looking at the state of the location where he lives. Grasshoppers or herbivorous insect species always build nests in locations that have a large area, the advantage is that in such a large property they can move comfortably without any interference from any party. 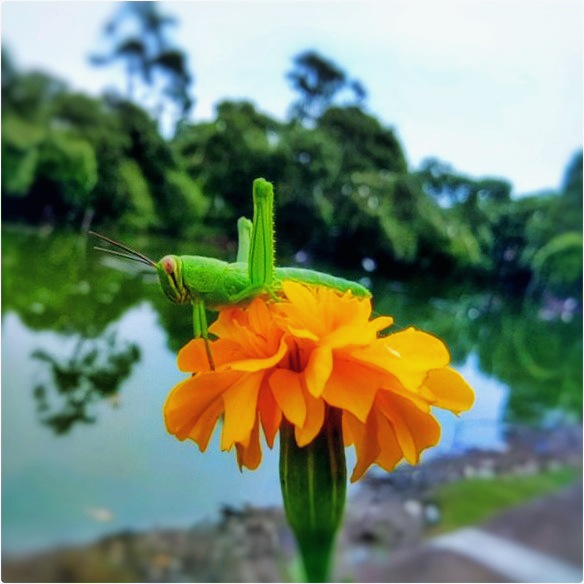 Thus, it is certain that the presence of young grasshoppers in this riverbank area is purely due to the natural effects that occurred last night (wind and heavy rain) that hit parts of our area, so that each insect suffers losses in the form of losses, namely losing their own initial nest.

Thus today's activities, meeting young grasshoppers and an ornamental plant, namely zinnia flowers that look stunning on every riverbank. Thank you very much.