Welcome here to your new home 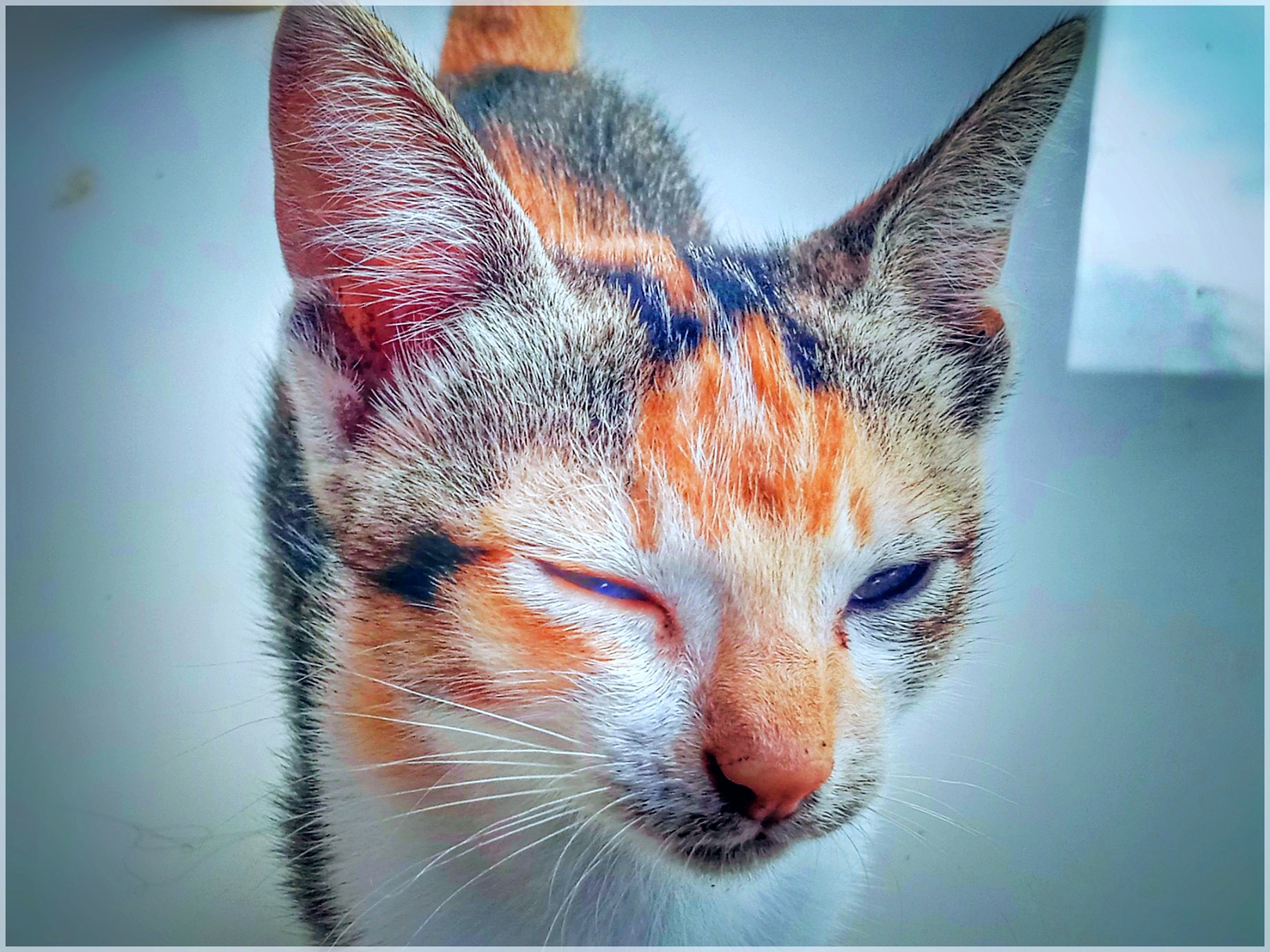 Along with the times they were born and born, thus filling every corner of the world. If you visit every region of the world and their phenomena are always there, both on the streets and in homes, many people even tell a special story either in a film or in the media.

The story will still exist, even though the world changes in every time and place, strangely again every race, group, and others always have a funny and unique animal in their life.

His fame became the center of attention of people who wanted to see them there and comfortable. Even bad people still love this cute animal figure. Especially in an environment of good people, of course, it is very visible, and will be king in the eyes of those who like him because he is considered part of the family. 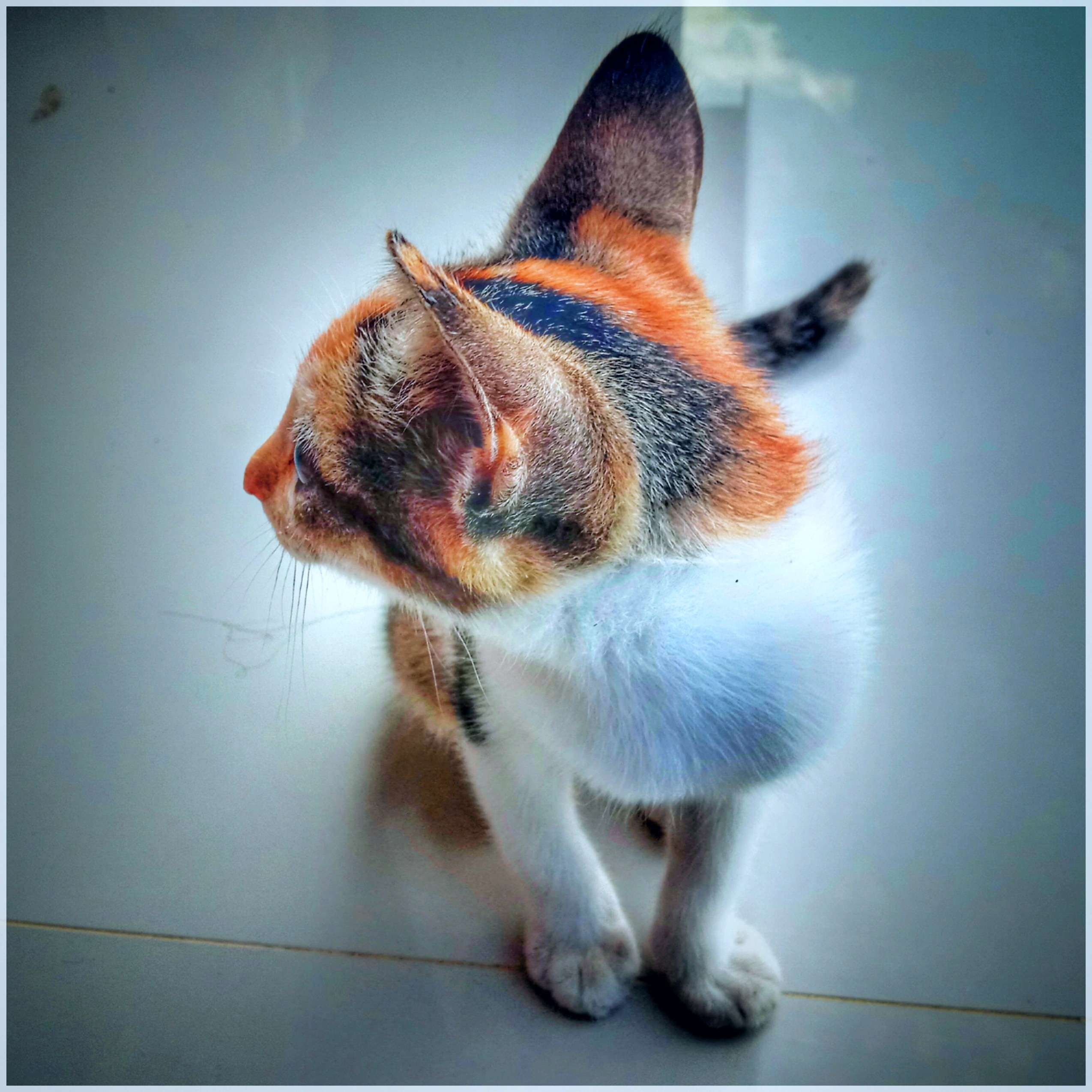 The cat that you see in this post, is one of the cats that does not have a family meaning that it is not adopted by anyone, grows and develops in the human environment without anyone caring about it, but still lives, by surviving with its own strength in their environment. I thought he had family or thought he was a neighbour's pet, but I was wrong, because this month he often sleeps on a tree or plant behind our house at night. This cat would always visit our house during the day, within a few hours, but after getting the search results then disappeared. He came here, because he liked the smell of children's food. He will eat any food, in the form of children's leftovers or snacks or other things that are crackers. 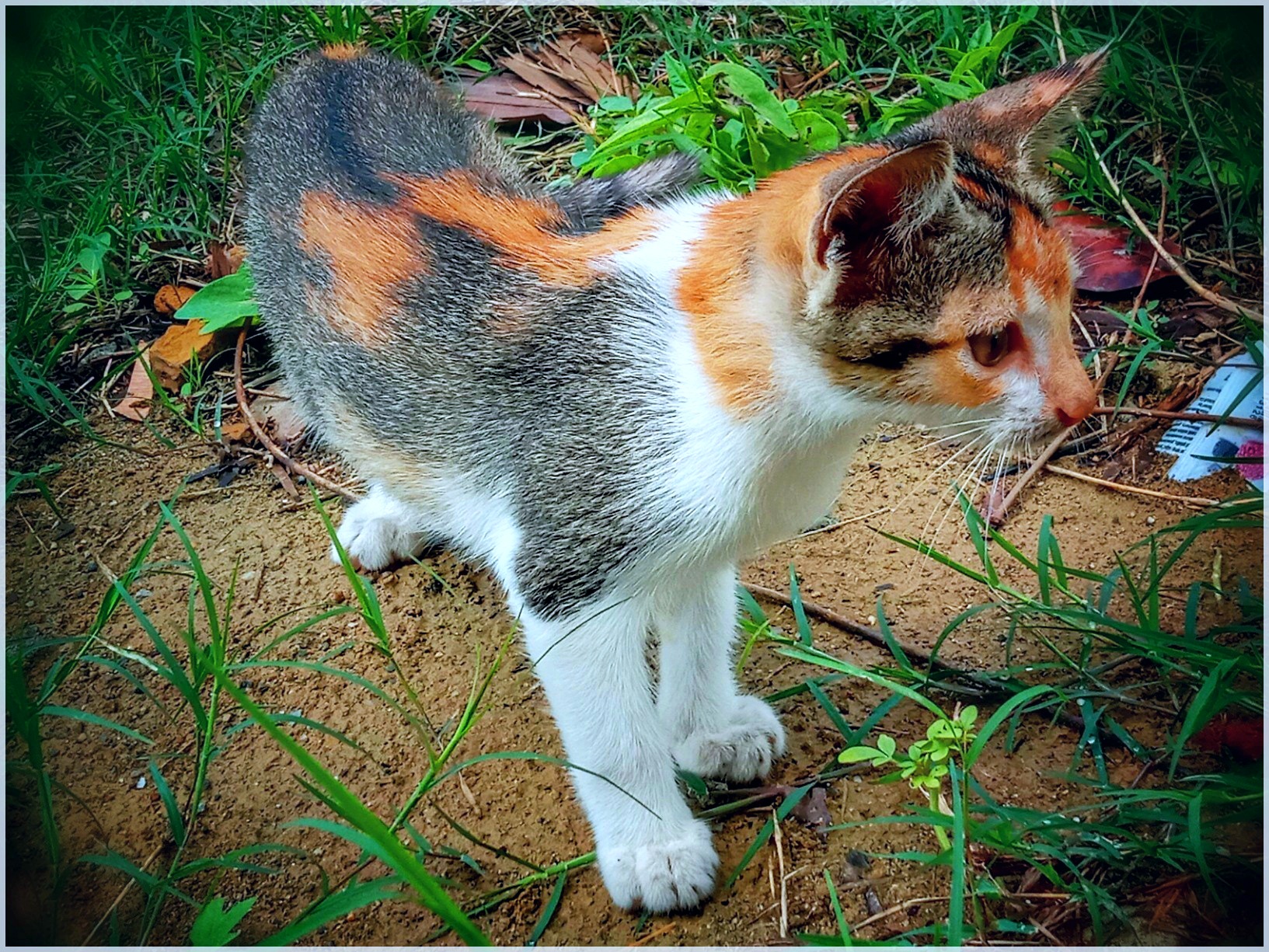 During this month, I often saw him in the yard and even in our house during the day, but when it entered 4 pm he was seen again here, with the aim of looking for the trees I mentioned above and that was the location where he spent the night.

After I waited for a month it turned out that he had no home or family, so I came to one conclusion to give him a comfortable life in my family. I concluded that he was a street cat born to a father and mother of the same profession. Entering the 31st day, officially adopted him as our family pet.

Precisely today, Sunday, September 5, 2021, he already has his new family, namely us, with the hope that he will always feel at home in his new life, here at our house. 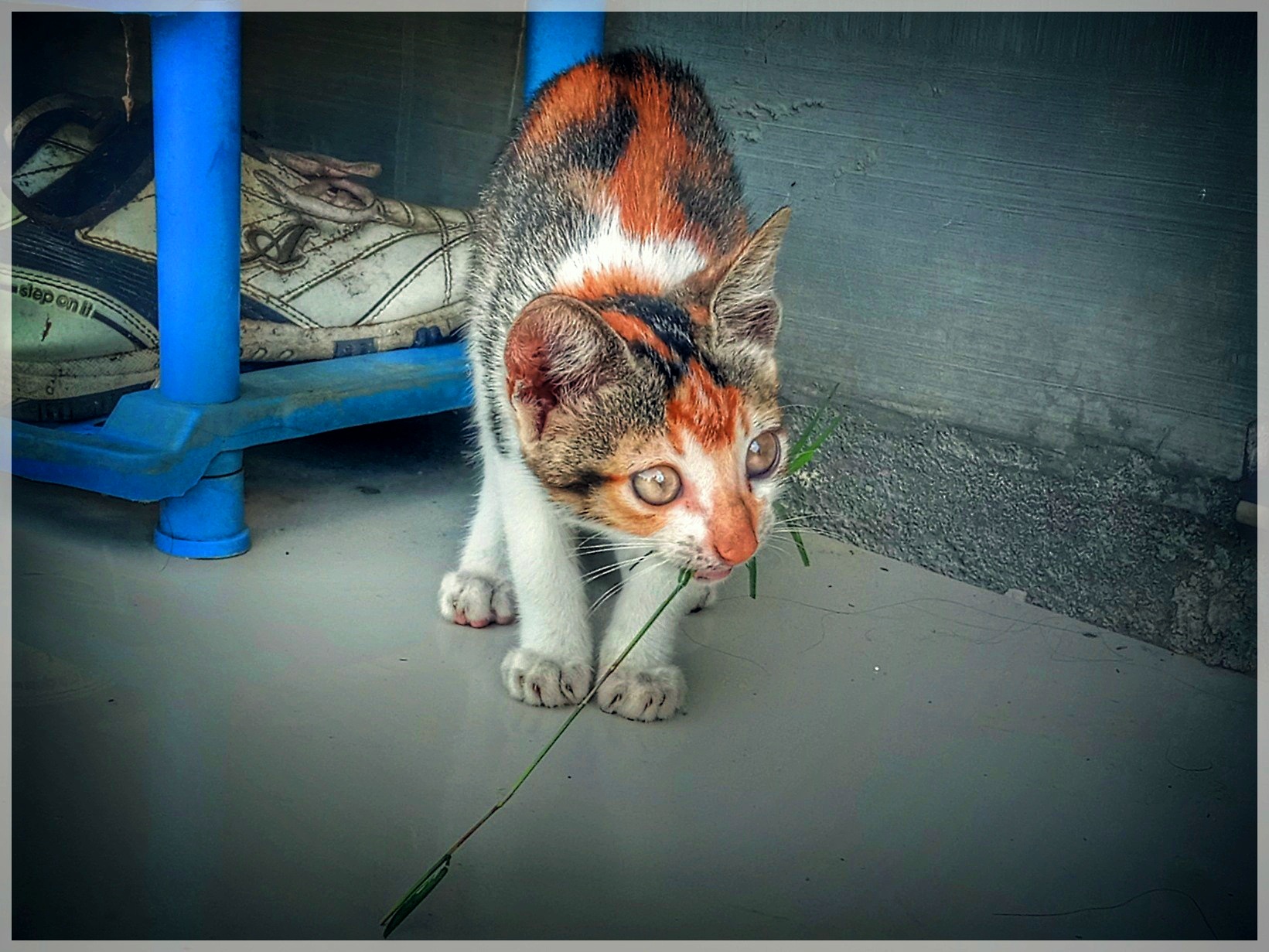 Having a little problem about food

When he didn't think we were strangers here, the first thing I gave him was rice mixed with mashed fish, this initiative I did so he could easily eat it. But it didn't appeal to him, his food was just sniffed and left, then he slept near an old shoe rack.

I wonder, in general, the cats in our area, if they are treated to fish mixed with food, then they will devour it completely, but not with this cat. Then after some time one of our children gave us a bread that had a special aroma, well this is what he was looking for, and he continued to eat the snack.

The bread in the form of snacks that was given to him quickly ran out, then he was given it again, apparently he also finished it. Seeing this behavior, I myself concluded that his life in the wild yesterday was looking for children's food in the form of certain bread with a distinctive taste. Then after finishing a few pieces of the snack, then he jumped up and down like children were having joy when he had something he liked. He also played with fun with a small weed that he grabbed near the house's yard, then brought it to the terrace of the house and did fun things as you can see in the picture.

I haven't given him a name yet, because I'm afraid he might have a master or a house of his own. If the owner doesn't come this month looking for him, then I consider him legally mine, and I'll give him a cool and beautiful name because it fits his own stature and gender.

But based on the results of survey, he is a street animal as mentioned above, although today I just legalized it, but I know him very understand it in this month, because he is always in our neighborhood, even if only spend the night in our tree.

Tonight, he will spend the night at my house, as according to the foregoing, and I will make his bed worthy and fit for this animal, like any other pet. Thus I have helped him. 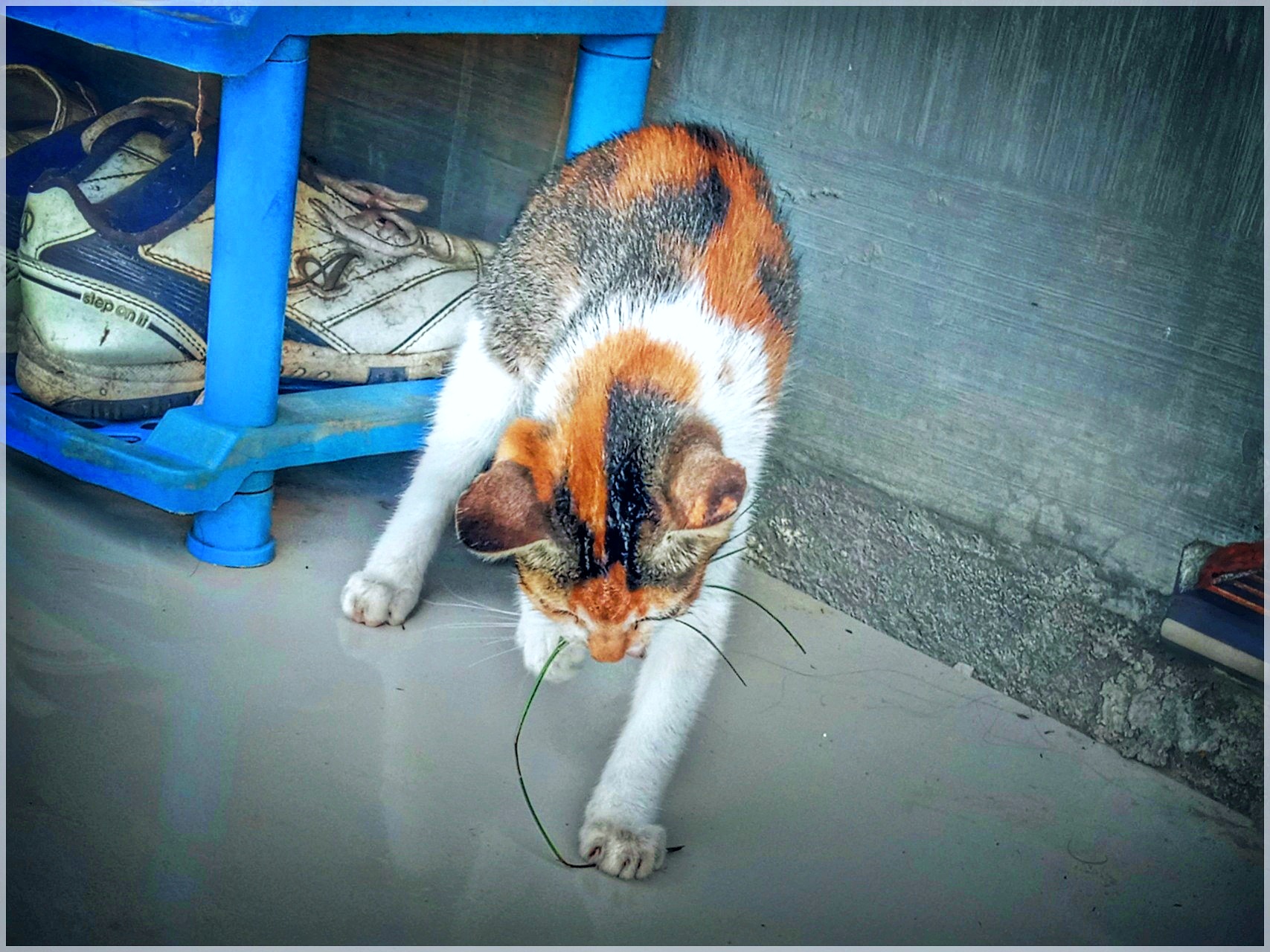 Even though her body is still dirty because she plays outside, it doesn't matter to me, because later I will clean it, of course she will look beautiful and cool. One thing that makes me love it is because it has colored fur, it has 3 colors that are clearly visible on its body, according to the beliefs of our community here, if you adopt it, it will become one of the mice repellent cats that often come to the house. These furry cats, never eat mice, they only repel any intruders, they will always deter every mouse which is often something they don't like. The reason is because they have the desire to dominate a territory. So do not be surprised if the intruder like a mouse will continue to be chased away. 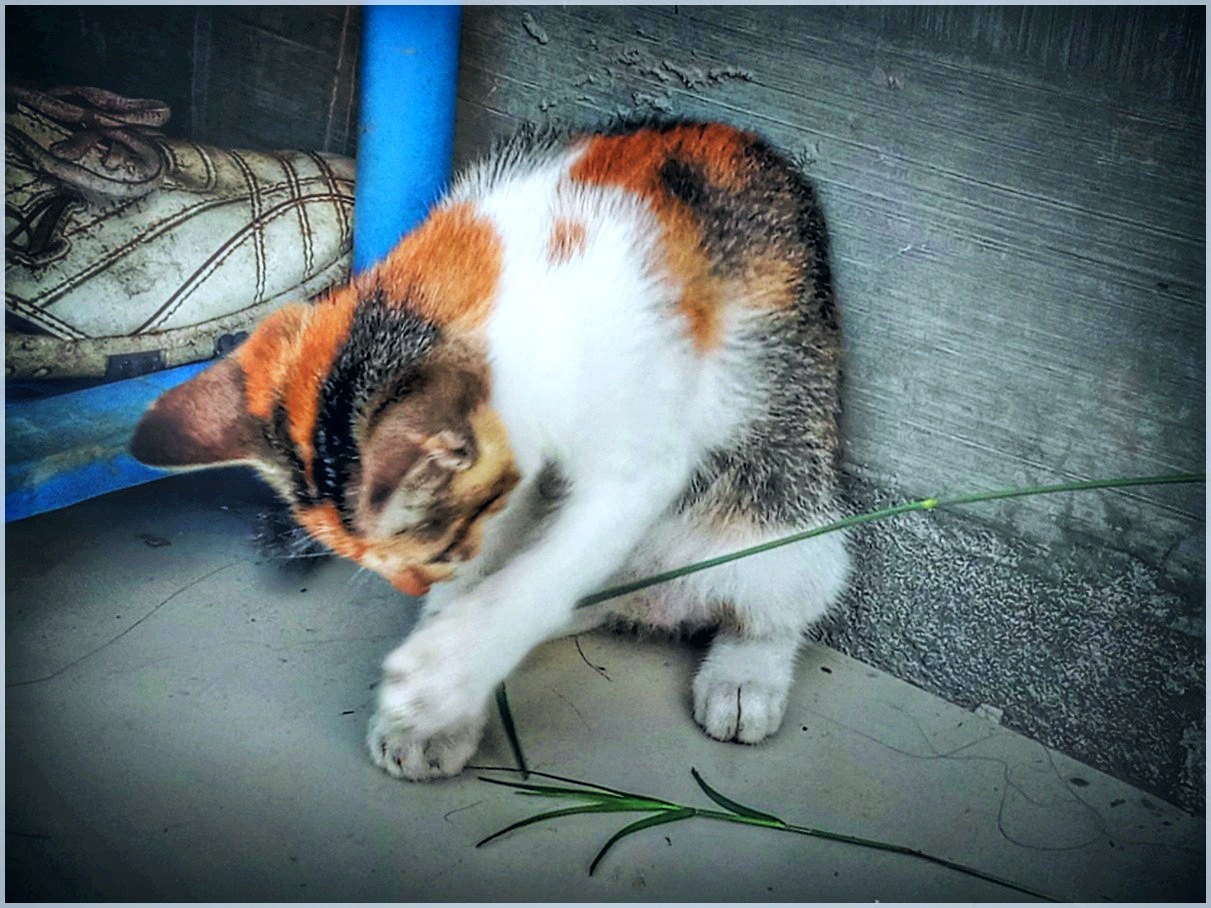 I am very happy to see him playing with an object, his curiosity is very high, it can be seen that he is always turning the weeds taken in the yard.

The weeds continued to be bitten and pulled, then played, it kept on repeating, because they wanted to know the certainty of a leaf. Maybe later he will also play with other objects such as small balls or other.

May this little cat, always feel at home with our family, and now he has a new family, which is us here.