First of all I would like to thank @adalger, @lourdeshd6 and @nicanor-mosquera, for their guidance so far on this beloved platform, of course on hive.blog. If I'm not mistaken this post is my 25th time in the
Insectsoftheworld community. A very great community in reaching and gaining various knowledge, especially in the field of zoology. I hope that this community and other communities will always be successful in hive.blog, and also hive.blog will always be successful in the world of cryptocurrensy. 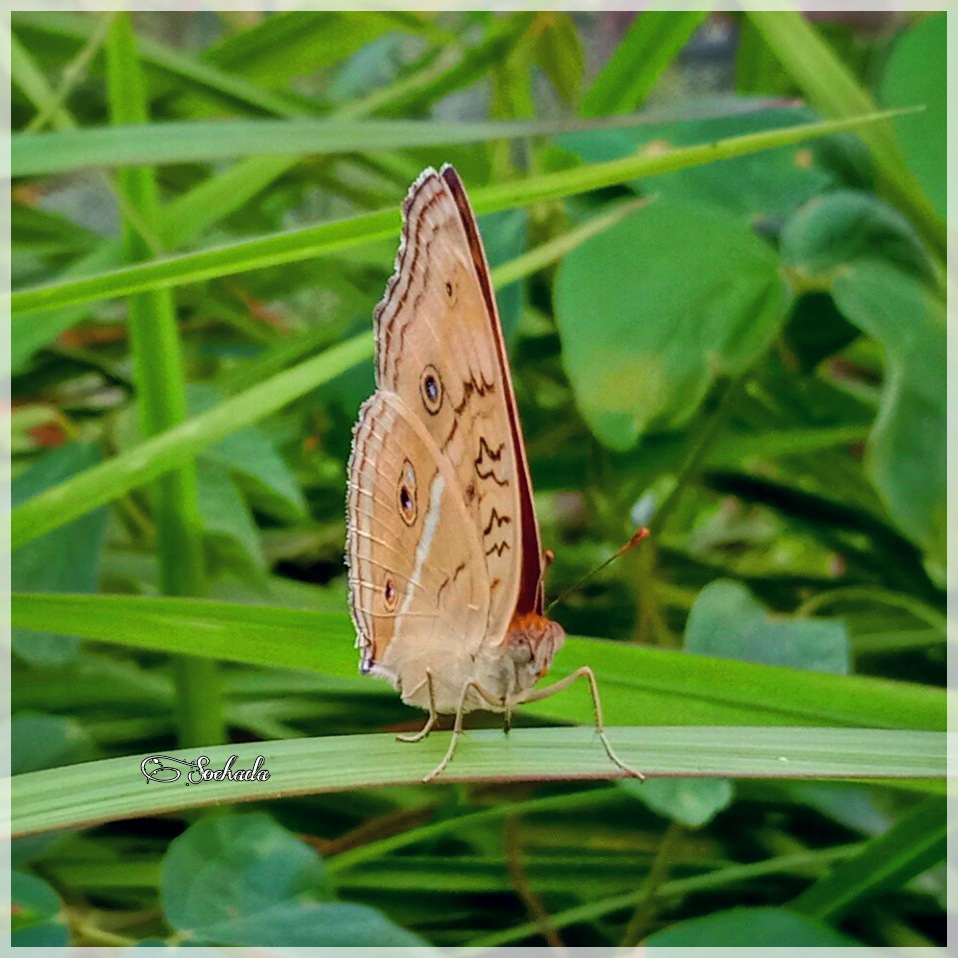 The Peacock Pansy is one of the rare types of butterflies to be seen in our area, if any but very minimal

As I mentioned in the footnote section of the picture, this butterfly is very rarely found in our area, especially in the Lhokseumawe area, even if there are very few. About two months ago, I saw this figure, on one of the wild plants, which grew on the shores of Pusong Lhokseumawe. I saw only one tail while the herd was nowhere to be seen. In that location (the center of the butterfly nest) what can be seen is the common tiger butterfly that dominates this area. When a swarm of butterflies dominates the area, then the swarm becomes the ruler of the area, especially the butterfly nation. So with this condition, the Peacock Pansy butterfly looks isolated, and is always cornered, then switches to other plants that are still in one area, or about 200 meters from the main nest. 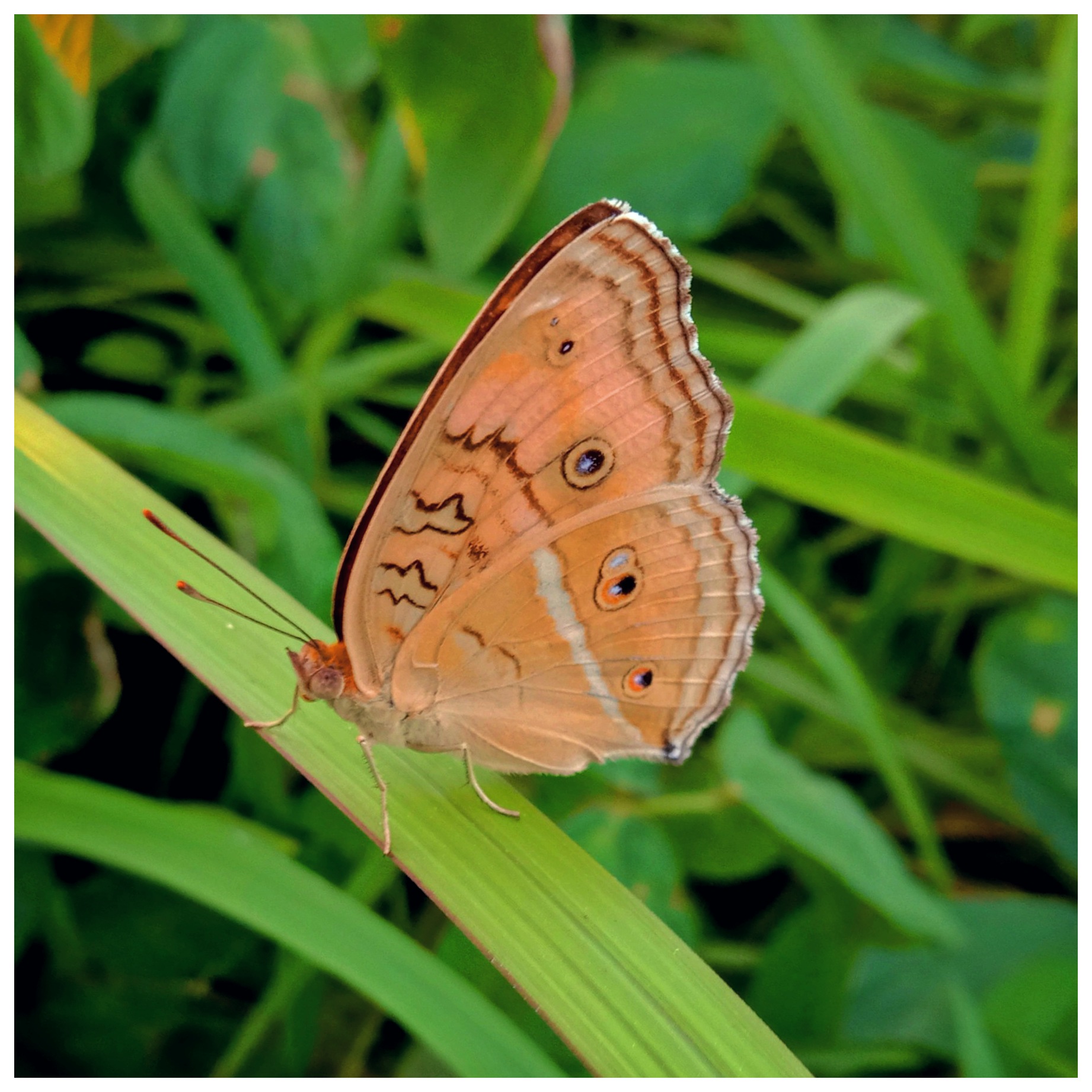 You yourself, especially insect lovers, will be very easy to recognize this butterfly, it has a medium size of about 3 cm (horizontal) and a length of up (vertical) about 3.5 cm (the size of the butterfly in my post picture) and note that this is the largest size of the species seen so far in our area. To get the results of these measurements is certainly quite easy, because when I found the atmosphere at sunset or in the afternoon before sunset, when approached, it did not move and flew in another direction. I really like the color and it can be seen from the overall look that the top is definitely a little bright orange. What is very interesting is that on each of the two wings there is an ideal circle, in my opinion similar to the eyes on the peacock motif on the front wing. Its beauty is even more beautiful when you see two different eye circles, one large and one small on the back wing, you can see each image in each image in this post. 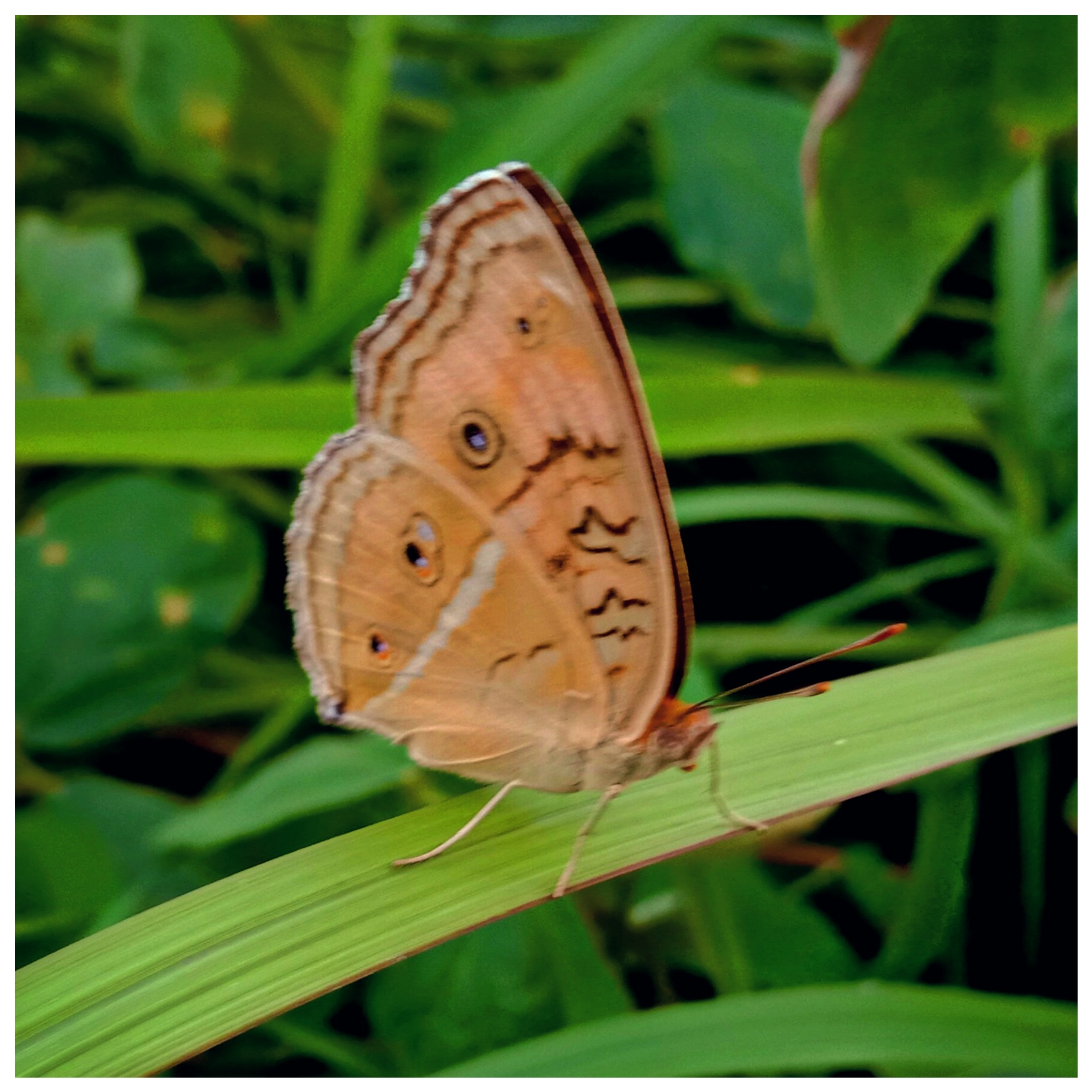 The beauty of the wings is also more visible when on the upper side of the wing there is a line in the form of waves or zigzags, for example a sweetener for lessons that are often done with designs or logos lined up on each vehicle.

While on the sides of the wing tips there are also lines in the form of ripples/waves which also become charming lines in a work of art. It is this beauty that makes her look even more beautiful and sweet, if the two motifs of her eyes, whether large or small, or some lines that cross on each side are absent, then she looks normal.

Therefore, lies the value of an art, this is where an appreciation in the frame of art. 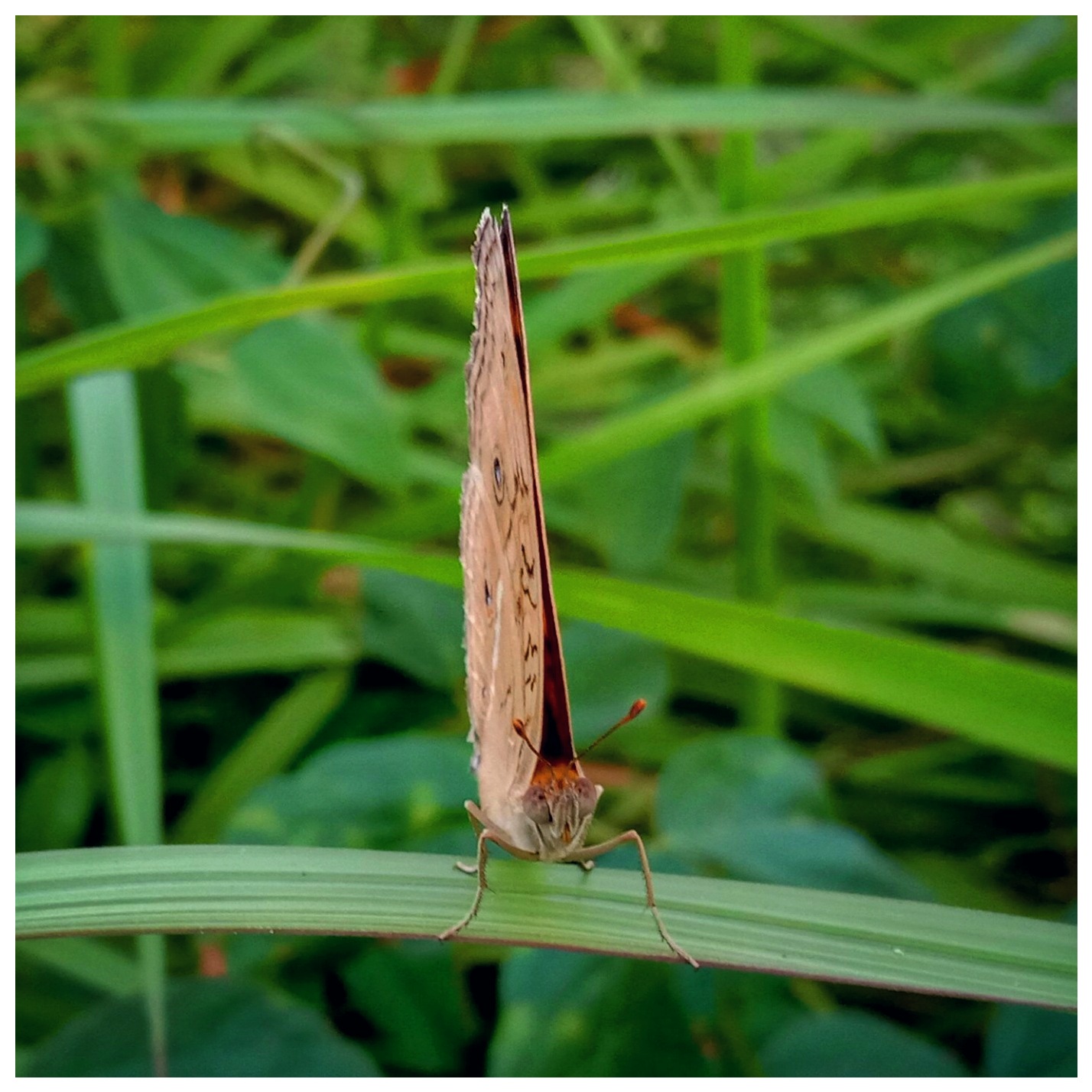 Everyone who sees the motif on its wings will say that this butterfly is a peacock butterfly or Peacock Pansy, this name of course refers to its character in terms of the motifs found on its wings. Thus, when people look at them, what they see is a beauty embedded in some parts of their wings, and it fits to be described as such.

Although some intellectuals say he is Junonia Almana, people often refer to him as Peacock Pansy or butterfly the peacock.

While our people here also say in scientific language or sometimes in English, but our area has its own term for this butterfly, the names given also vary but the famous one is called, Bambang Ticem Meurak if interpreted in common language, has the same meaning, meaning that it has a name that refers to a peacock or Peacock Pansy. 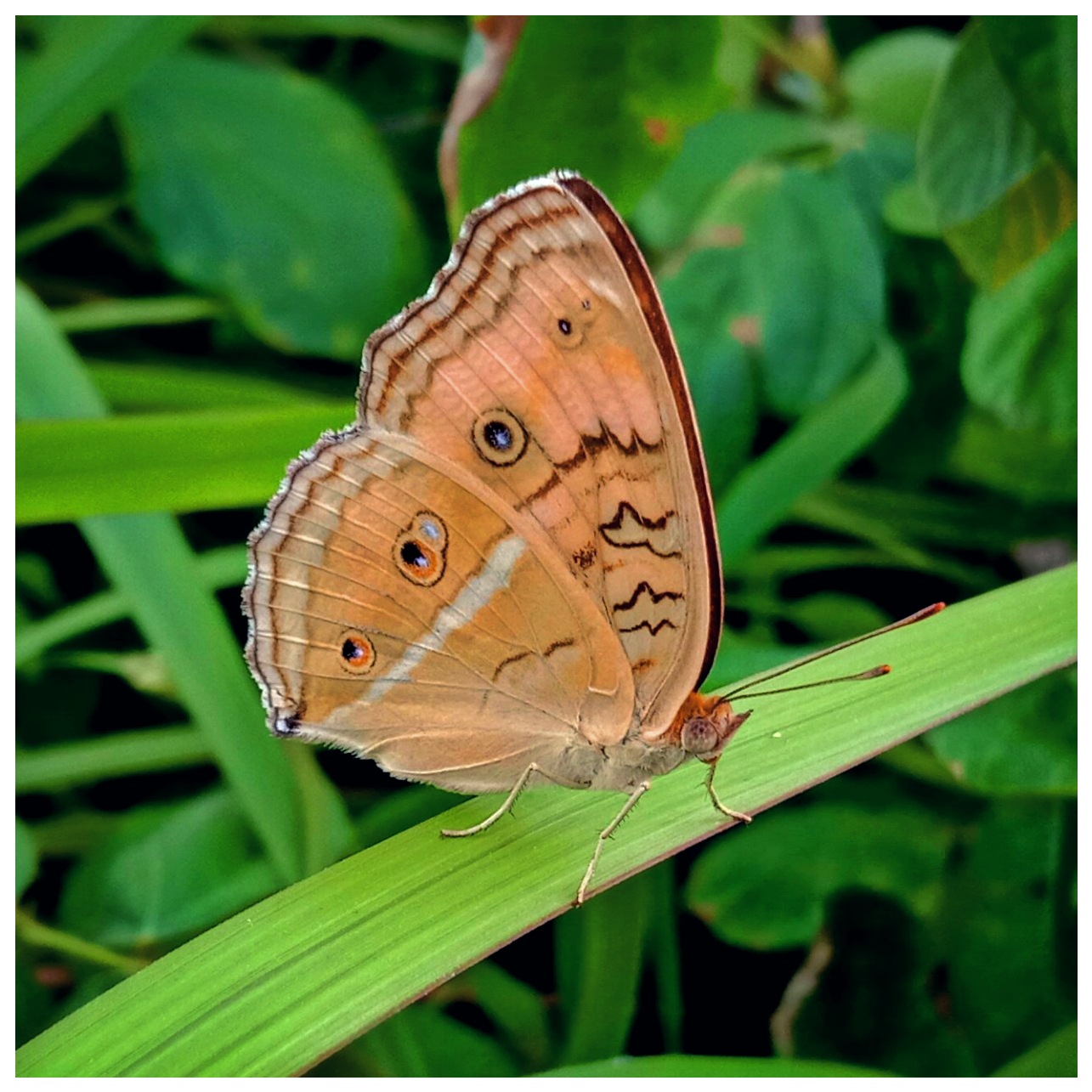 The difference in character from other ordinary butterflies 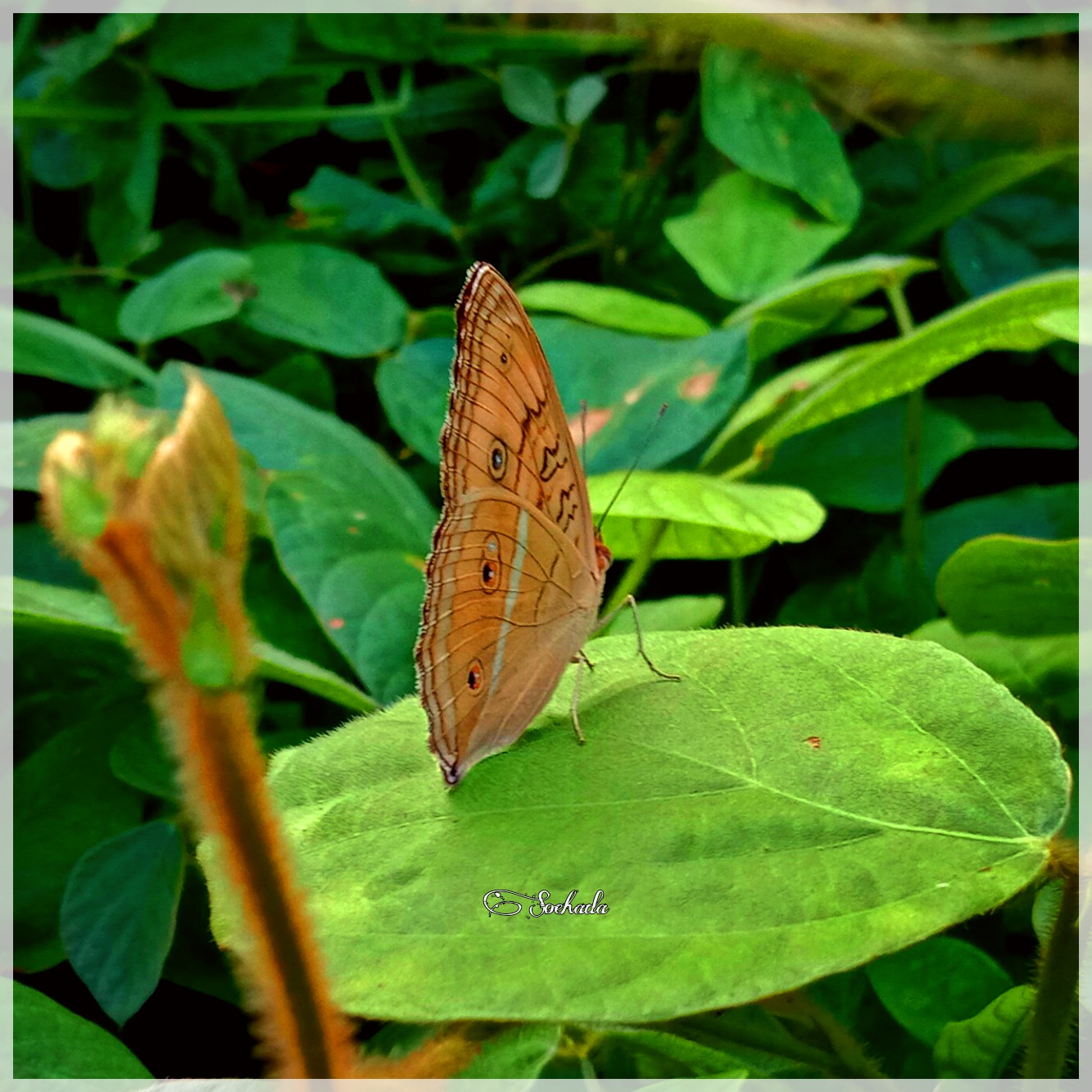 When the air temperature is cold or entering the rainy season, it generally occurs from September to December, but the peak of the rain occurs in November and December, our region, especially Aceh, is often hit by heavy rains both at night and during. Therefore when entering the season it is very difficult to find them, and can be positioned as non-existent and have not seen them in person at the time. Sometimes other types of insects are also rarely seen, maybe each (the Pansy Peacock butterfly) does not do activities outside the open air, and is most likely in an area covered by dense wild plants or hiding from cold temperatures and sheltering behind thick leaves (that's my guess) so in that season it was very minimal to find information about him. 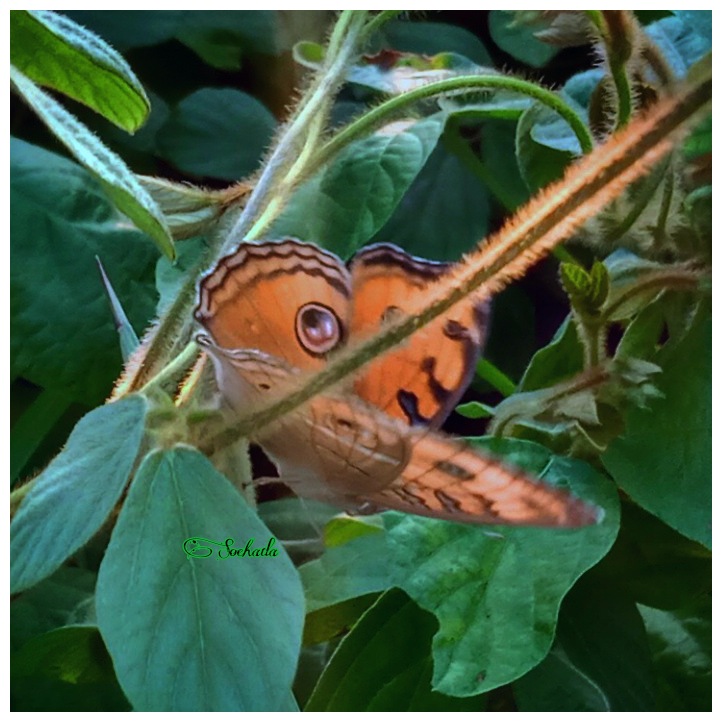 The dry season is one of the seasons that every insect species waits for, if in the rainy season they hide from every temperature that makes them stop their daily activities, but at this hot temperature, they have started to appear. Every activity has been started, carried out well, whether it is routine daily activities or other special activities or certain seasonal activities. This Peacock Pansy butterfly has also begun to be seen in the midst of the activities of every other type of insect, they are seen in the midst of ladybugs, beetles and several other resident plants. He will also fly like other butterflies but he flies in a low state and rarely carries out patrol activities like other ordinary tiger butterflies. 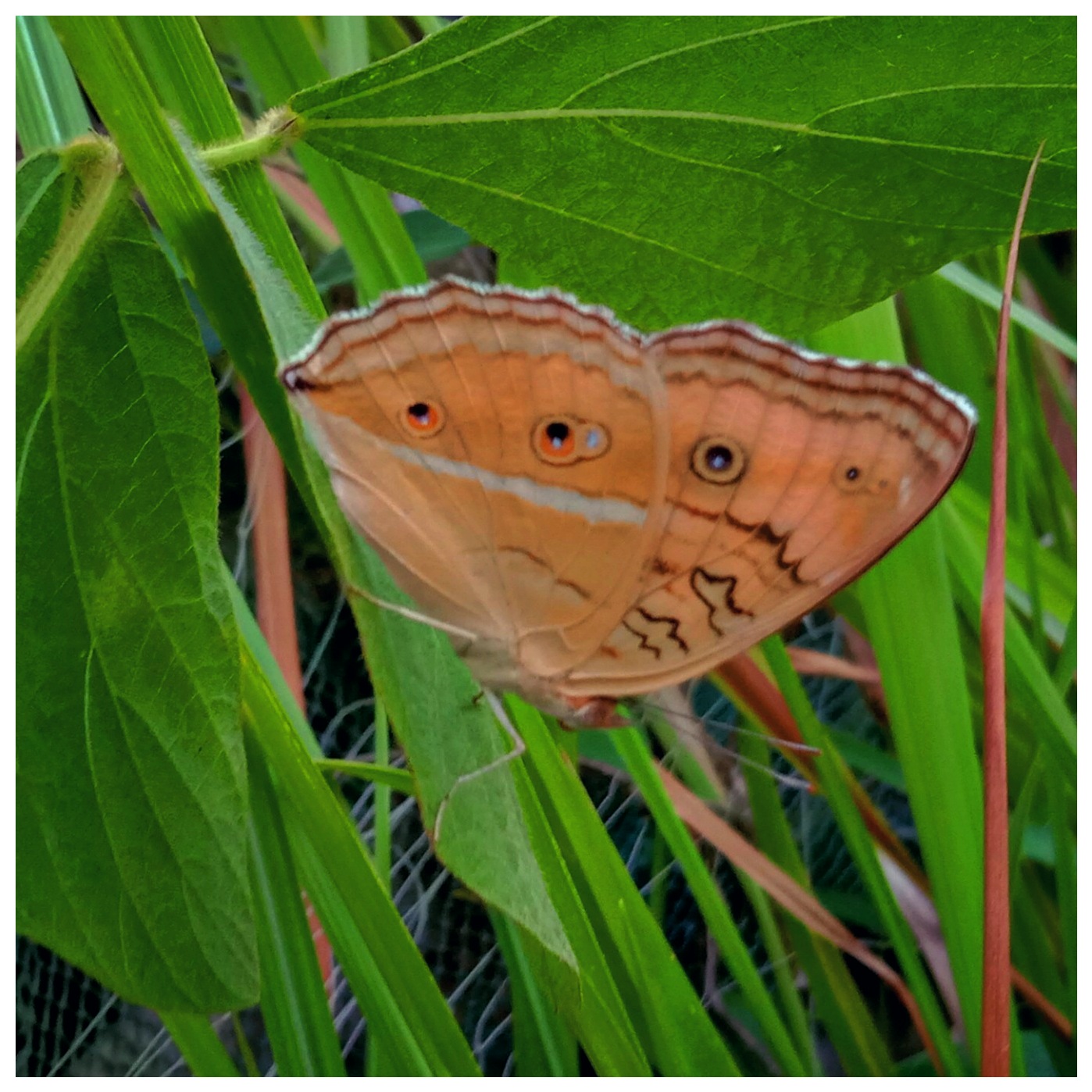 So in this case there are clearly differences in character between other types of tiger butterflies, but I also don't know for sure about this information, whether they have limited flying power, or do they like to be alone. But what is seen today, is that they prefer to live in leaf-covered locations among leaf piles, if you disturb them, they will also move to the other side of the leaves and continue to fly but stop again within 1 meter. 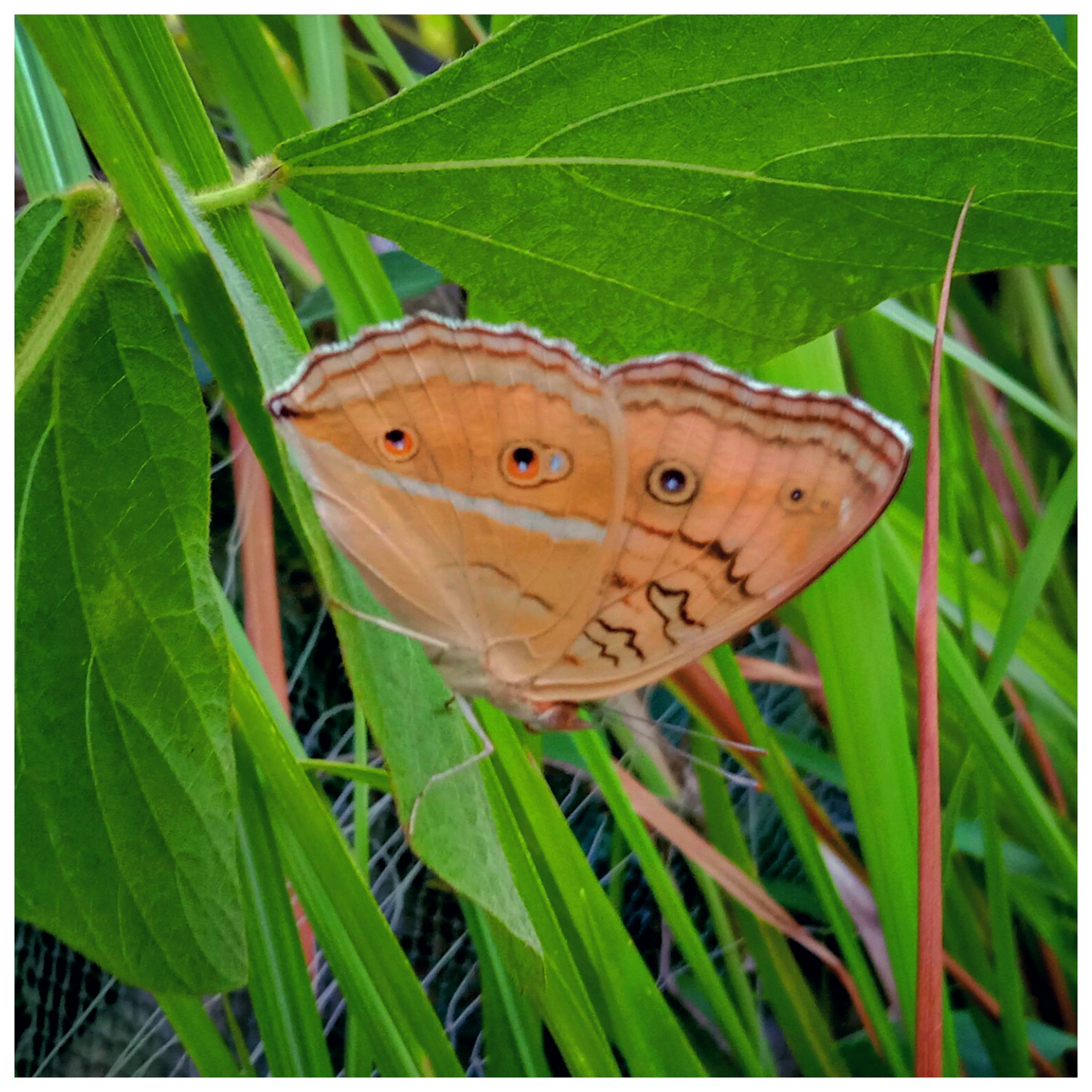 Another unique thing that is seen when meeting him is of course in a resting position, he rarely stands with his head held high or his head facing forward, in an upright position, or like other ordinary butterfly activities, he really likes to be in a quiet place. The location of choice is in dense foliage, especially in the afternoon, with the head down or upside down, and this position is often seen in the late afternoon or at sunset. 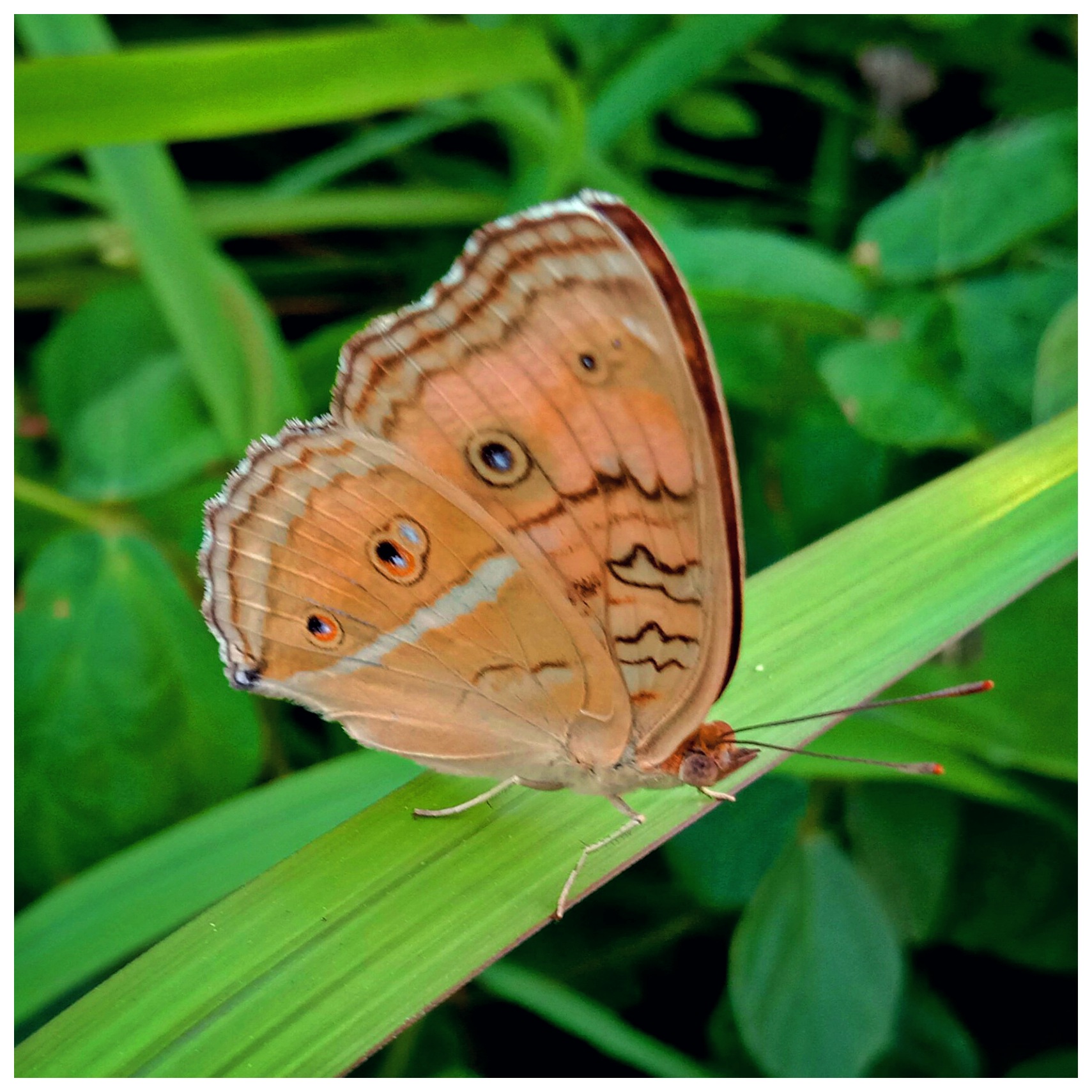 This inverted head position, I encountered very often, while in the normal position it was very rare, so that it made me make a small observation manually or in the style of the team which was carried out at the beginning of starting an activity, if in teaching terms it was called a pree test.

This uniqueness, becomes a question mark because its behavior is different from other types of butterflies, if every other butterfly likes to fly all over the plants but not with this type of butterfly (personal observation). 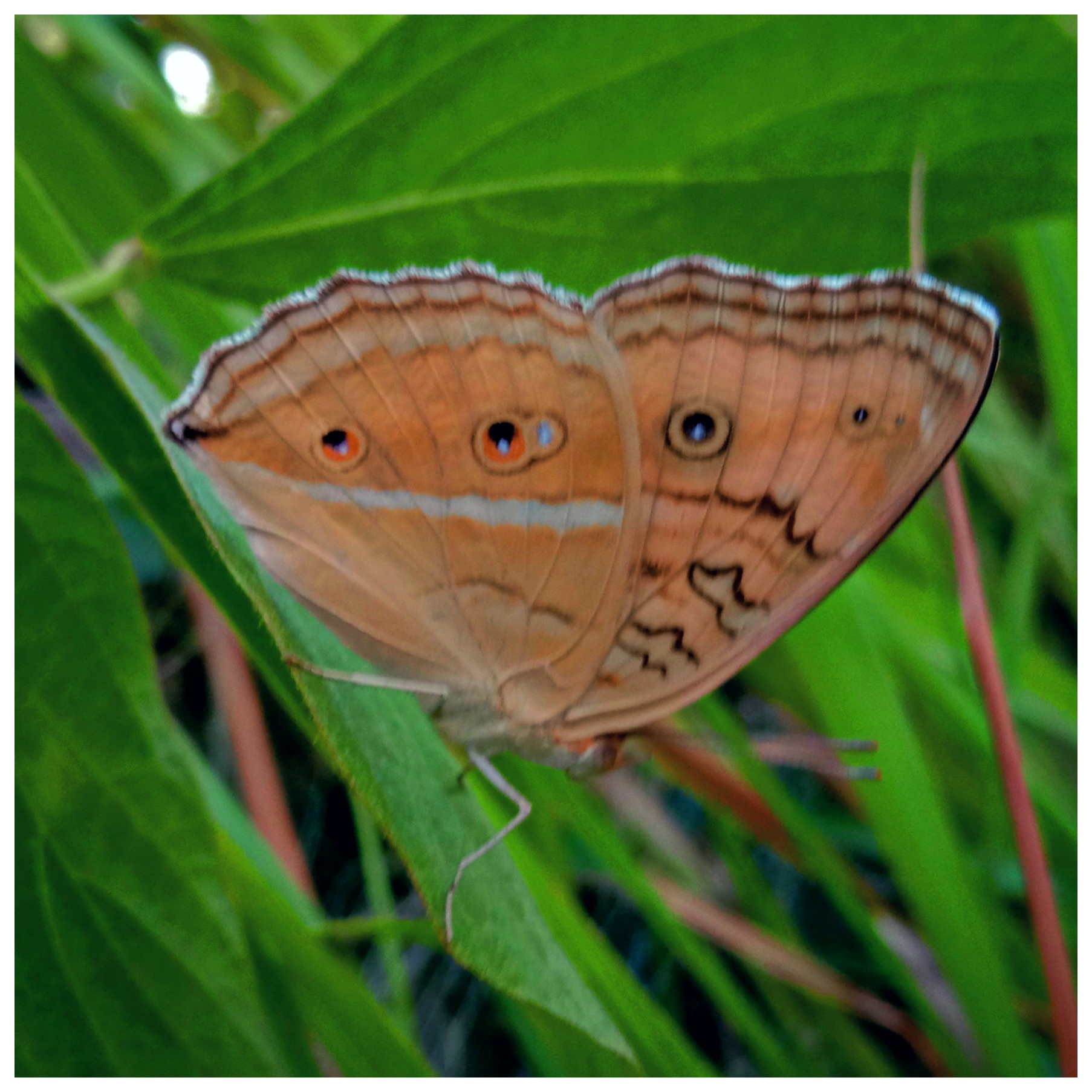 This Pansy Peacock Butterfly, has a mysterious thing about its behavior, so there are folk tales that often discuss it, especially in our area, about all the uniqueness that often occurs in every human activity, such as the story The Butterfly that carries gold and butterfly guides a lost man in the forest these stories sum up how loyal they were when it came to befriending humans and all other historical circumstances.

There are still many things that will be discussed about them, but will be conveyed in the next meeting. Hopefully you like it.

It is always a pleasure to read your publications, it shows that you like what you do. Thank you for sharing quality content in the INSECTS OF THE WORLD community.