Fails of the Urban Explorer: Nearly All Churches

I couldn’t manage FOUR churches so THREE and an abomination will have to suffice.

The fails are now coming thick and fast. Whereas in 2020 and 2021 I would add TEN locations to an all-day agenda and expect to infiltrate SIX or SEVEN, it's now down to THREE. 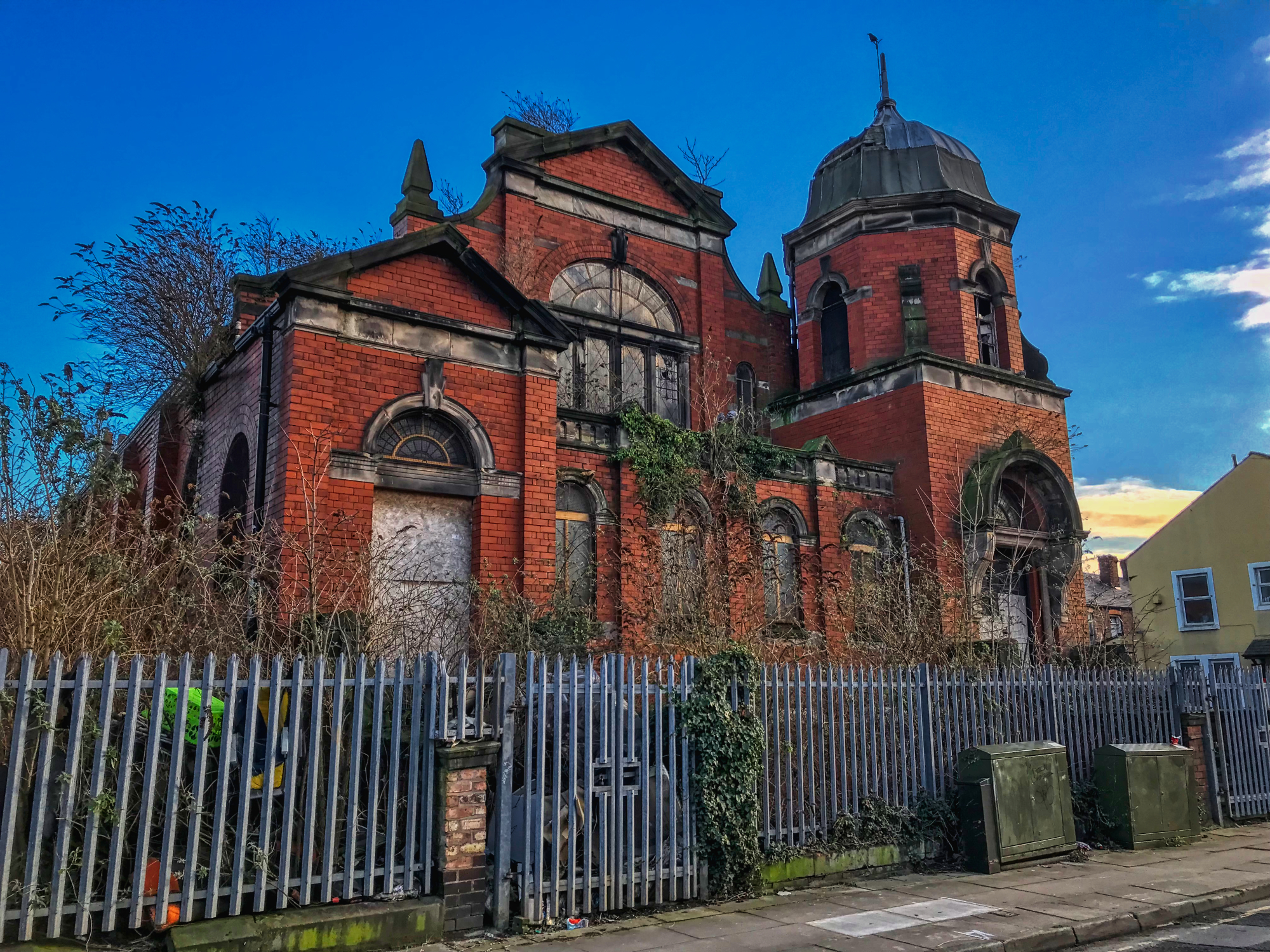 Talk about depreciation in expectations. I don't generally explore during the winter months as the weather makes it less fun but have done a couple of full days. None have been particularly fruitful.

Some of the below are the paltry yields I have been gaining.

It was not on my list, in fact, something else was close-by which was unsurprisingly sealed, and then St Hubert’s showed up.

Talk about gothic and enticing, I wanted in as soon as I saw it. There was just one problem and that was its location on an exceptionally busy street. 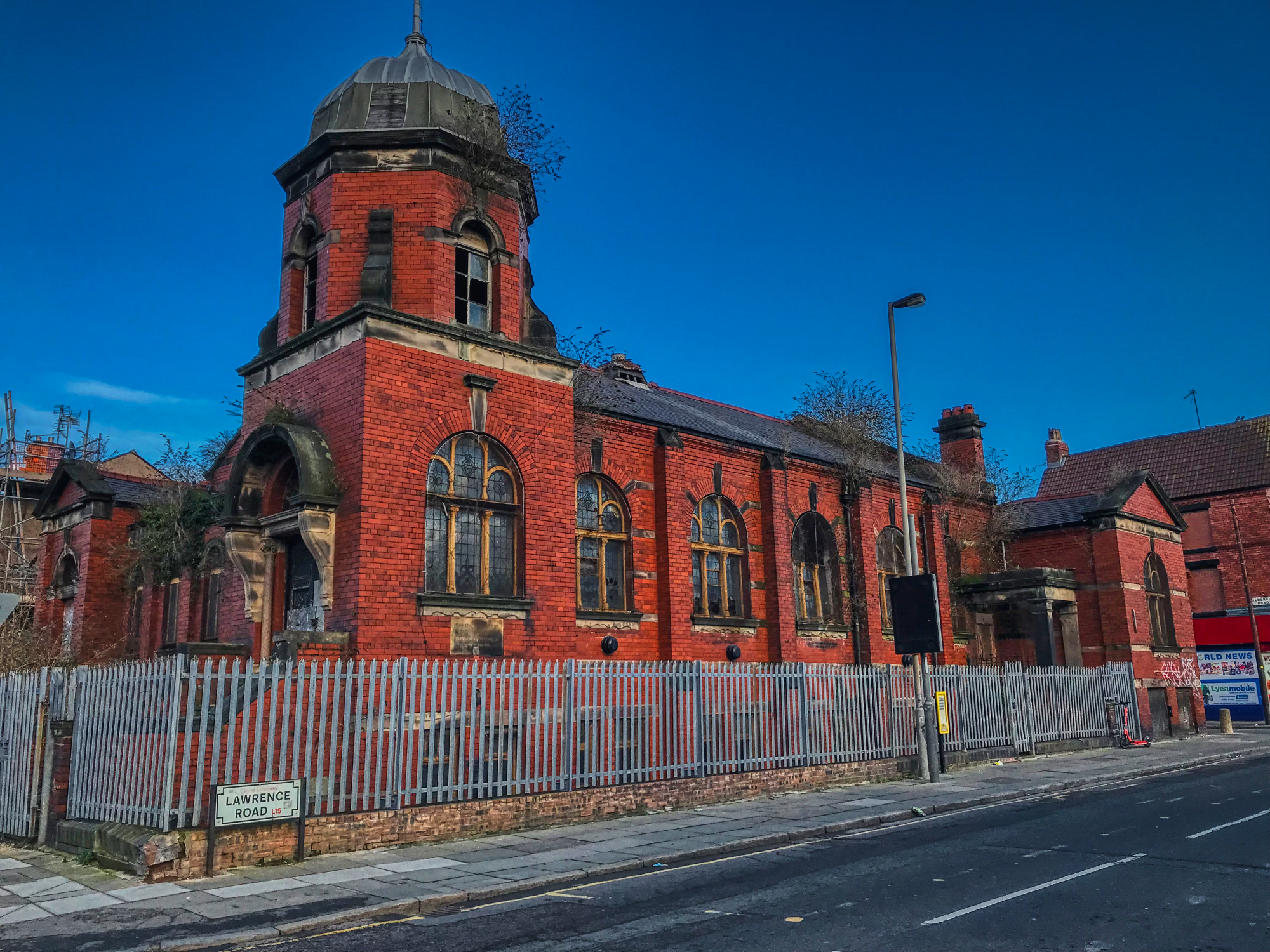 So busy that a woman stopped us, guessed what we were up to, and gave us some useful information.

It could have been bullshit, as I have not seen it doing the rounds but the claims were, many have been inside, there are goodies in there and that's the way in. 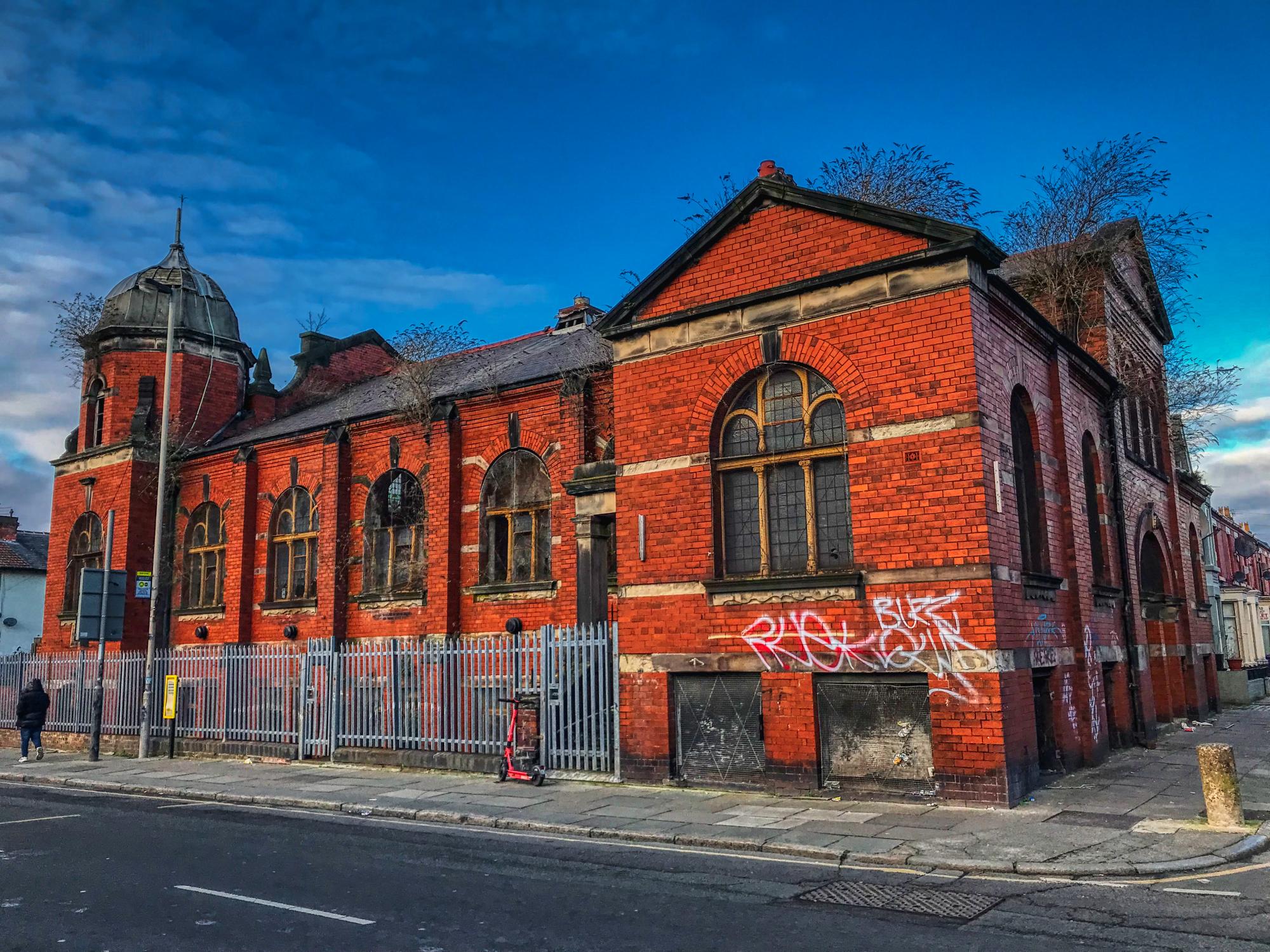 The way in was a jump over that testicle crunching metal fence, a shimmy along the wall, jump down and in that door. 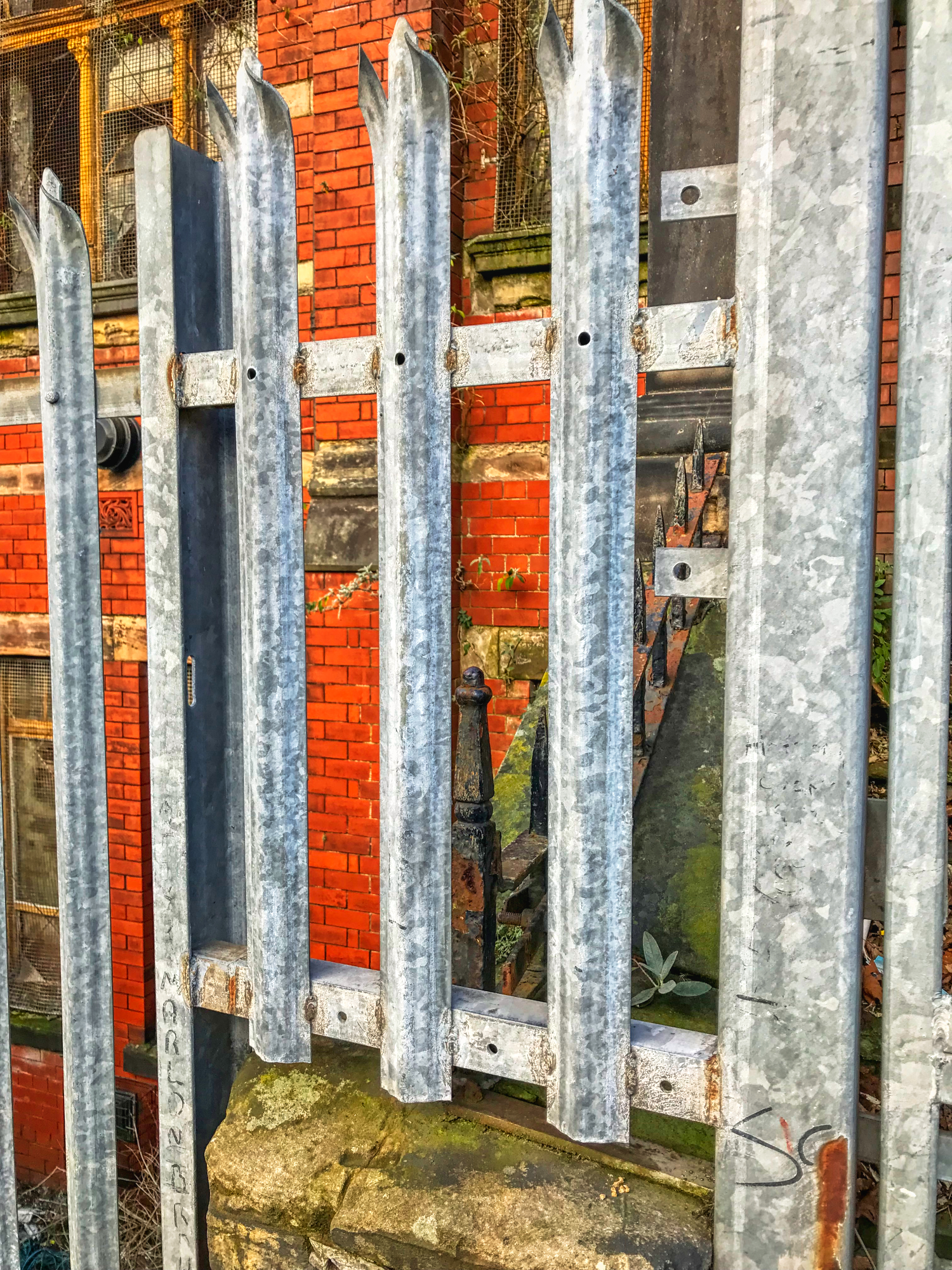 It’s all quite achievable except for the fact of the many milling people. I do intend to re-visit St Hubert’s and fuck the consequences. 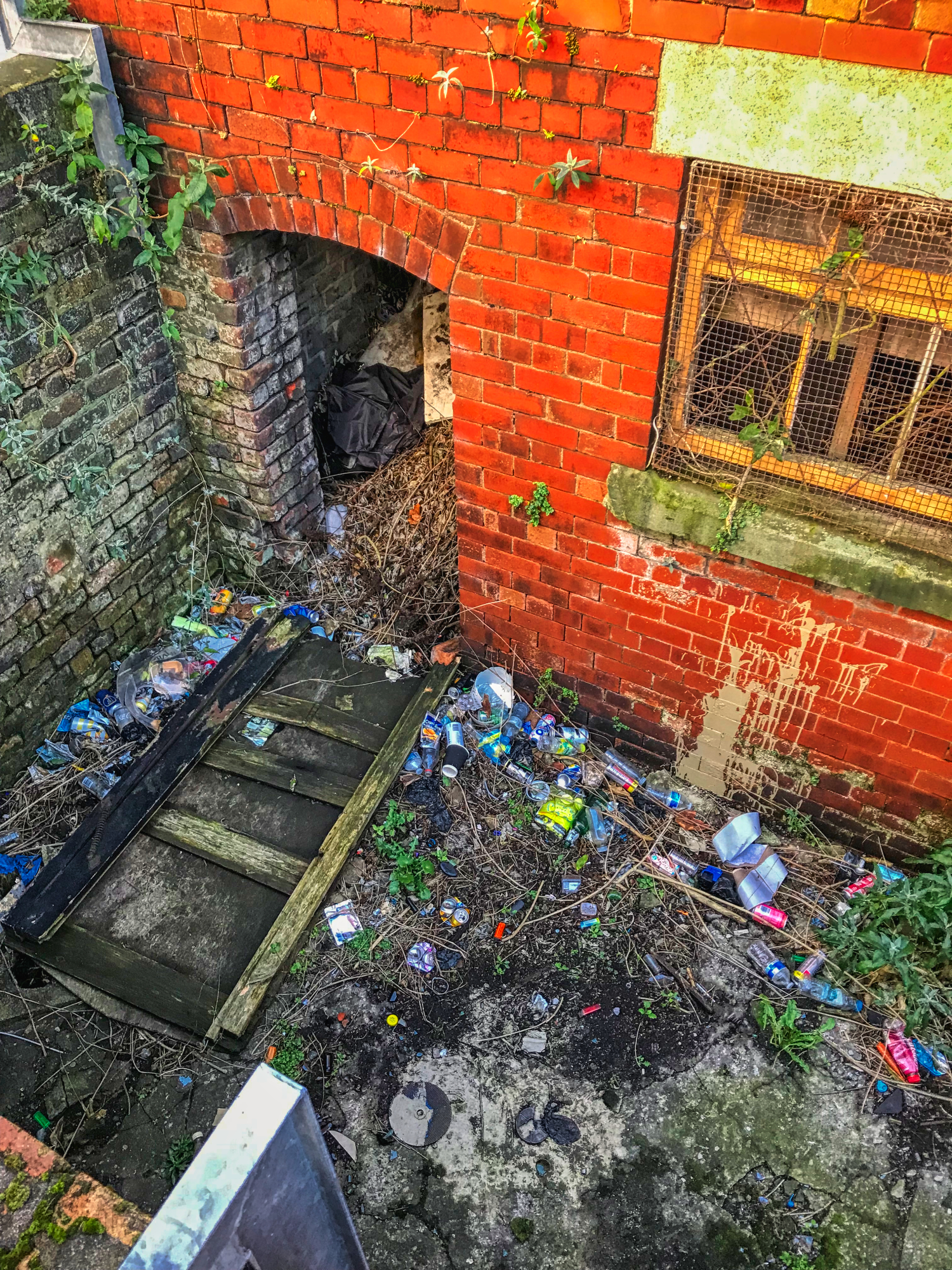 That door better be the way in, and not be blocked by a ton of shit in the way, or I will be filing a lawsuit against the said woman for misinformation.

Lately, I have been having a little more success with these houses of god but you wouldn't think so with this post. 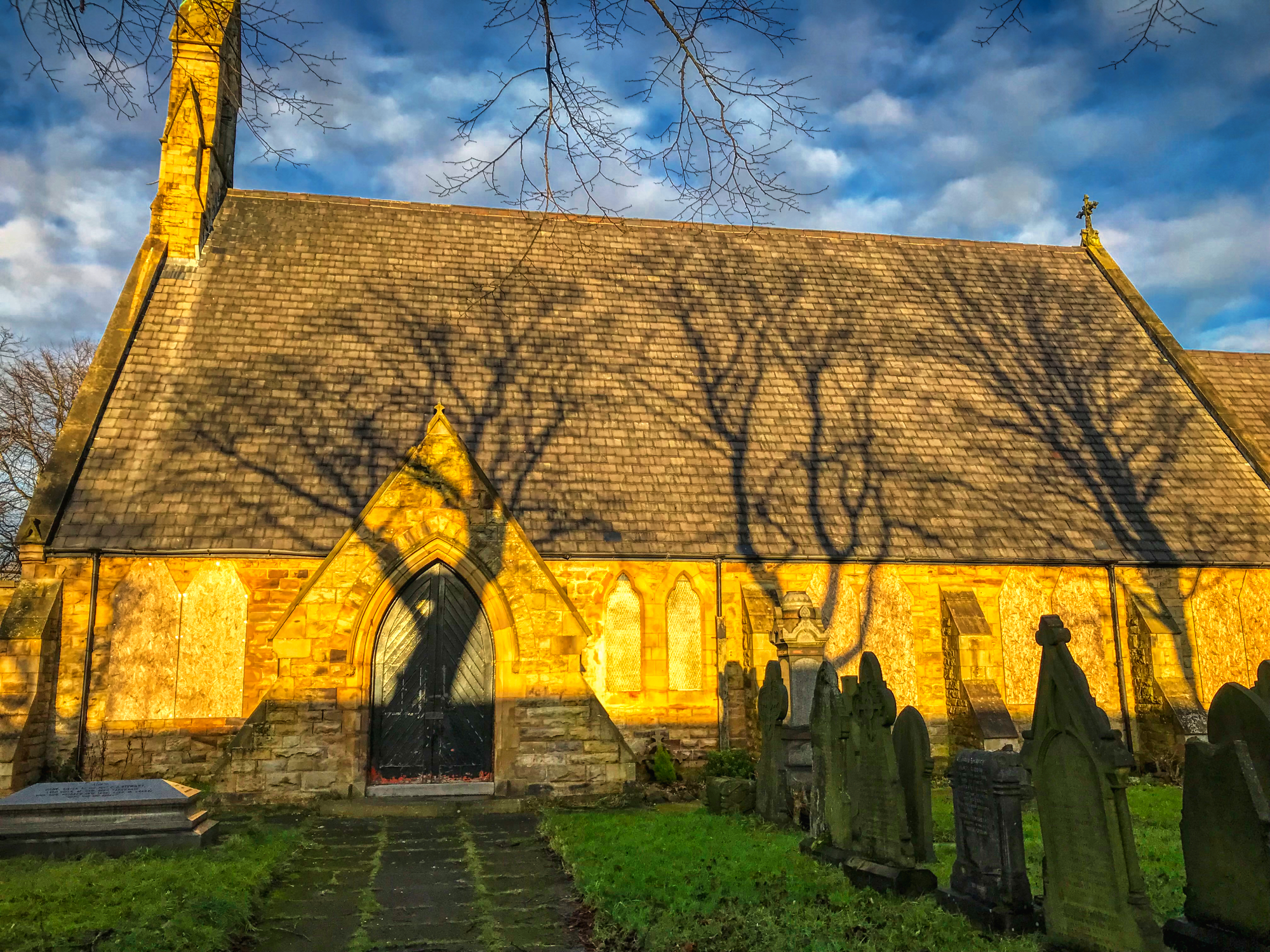 Little expectation was sought after viewing St Andrews from the roadside. 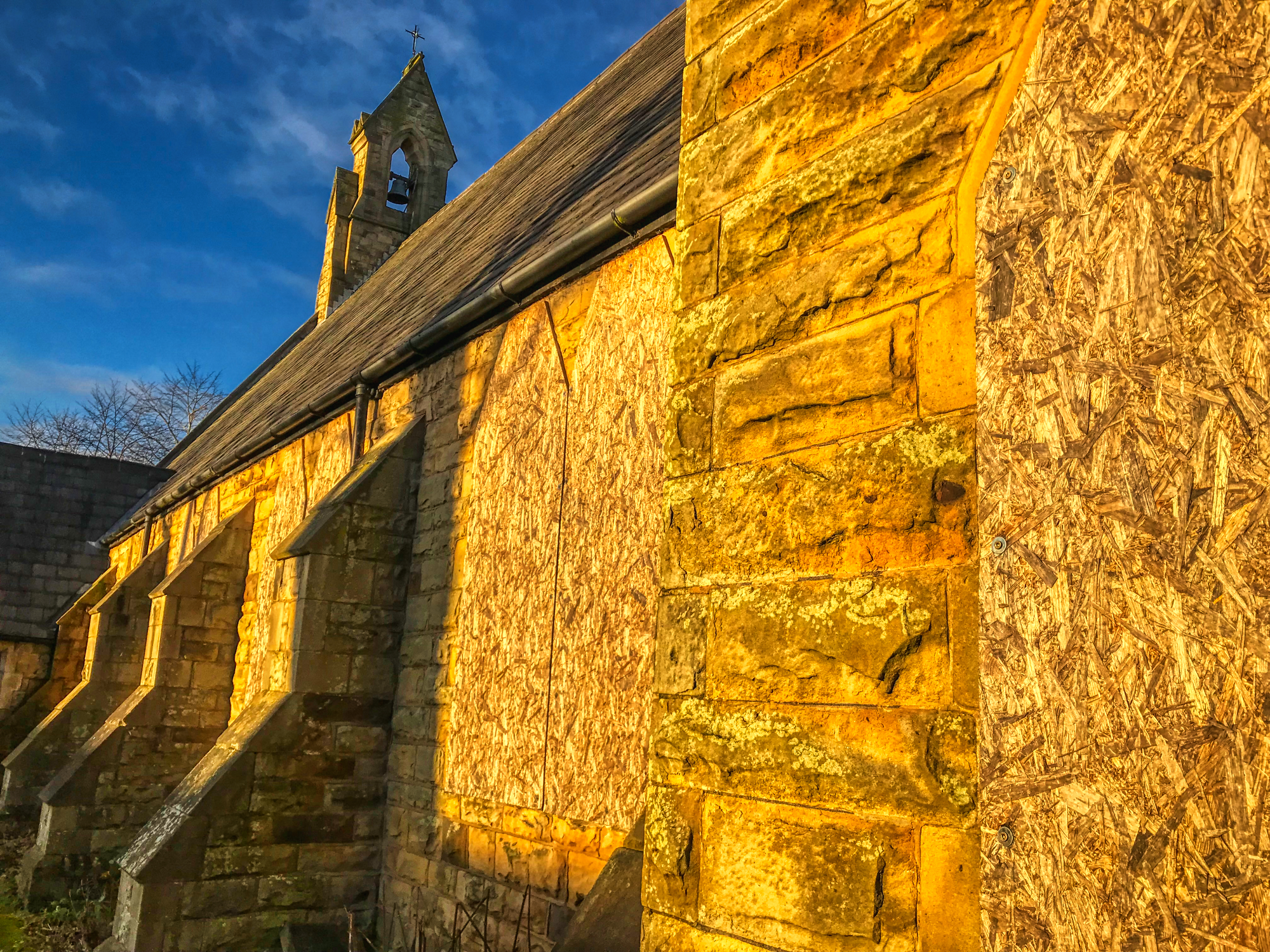 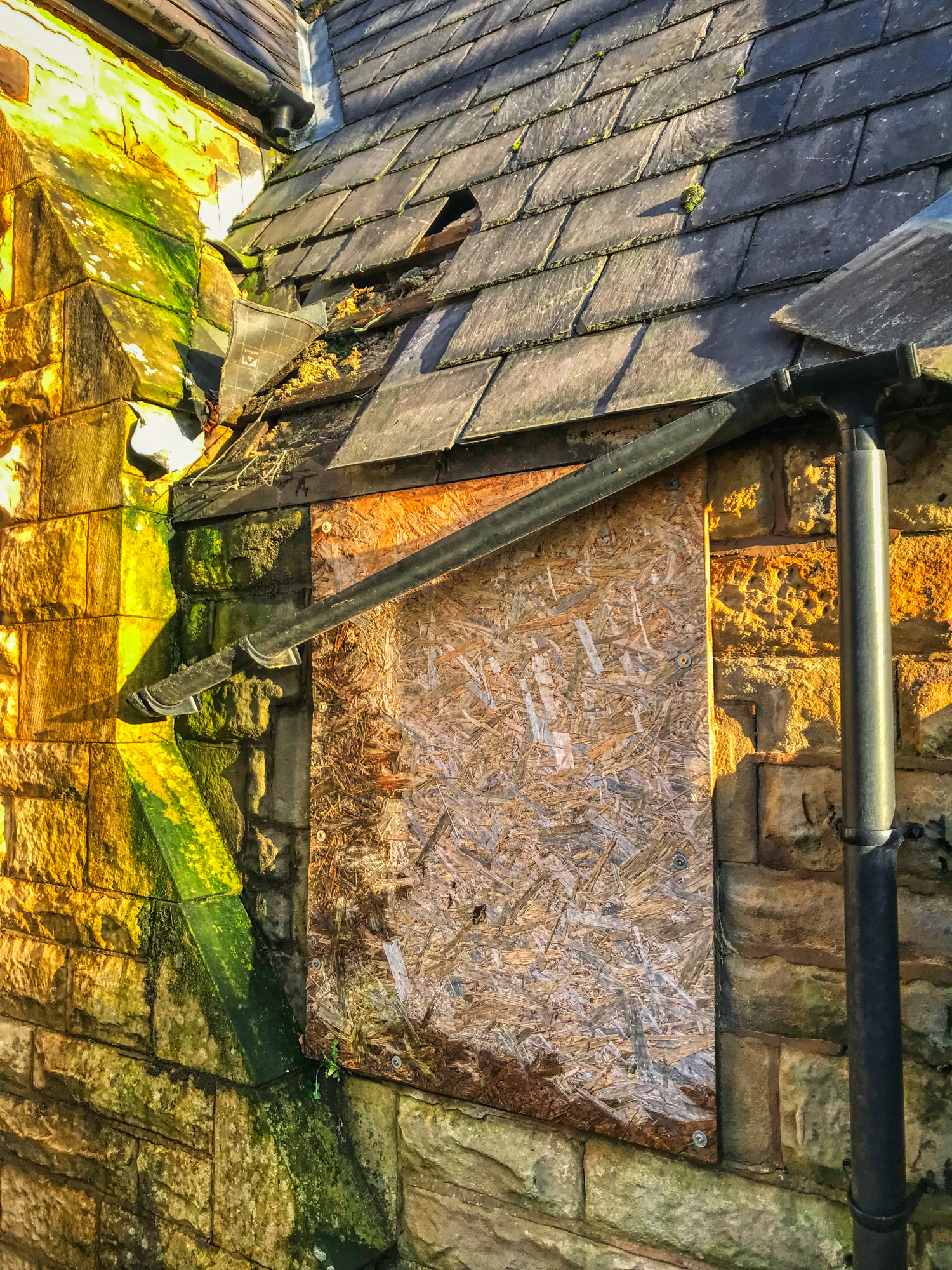 New boarding, and there could well be concrete blocks behind it all. Someone had tried to burn their way inside and failed. 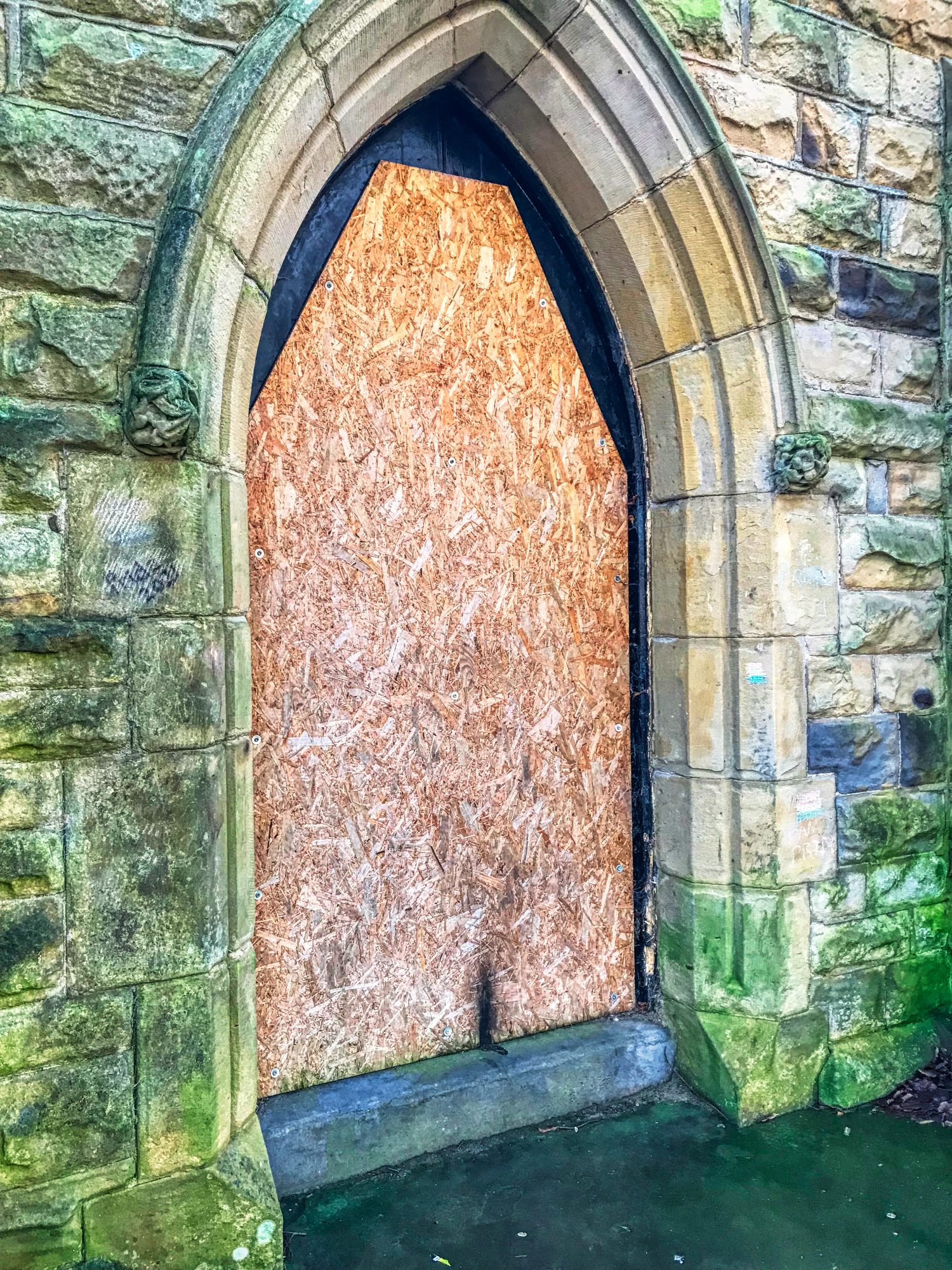 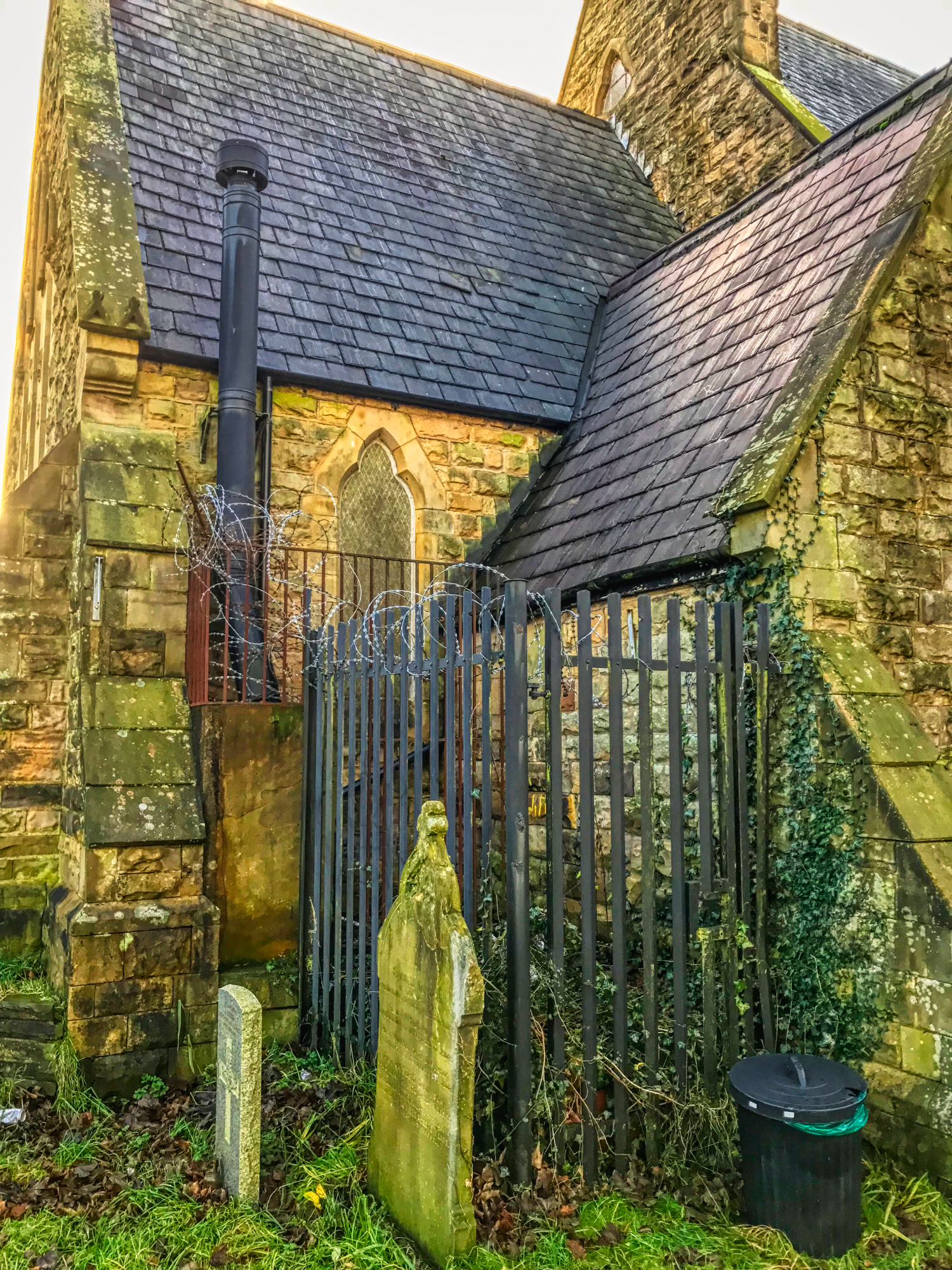 Is all that razor wire necessary? It’s not like there’s anything in that section. 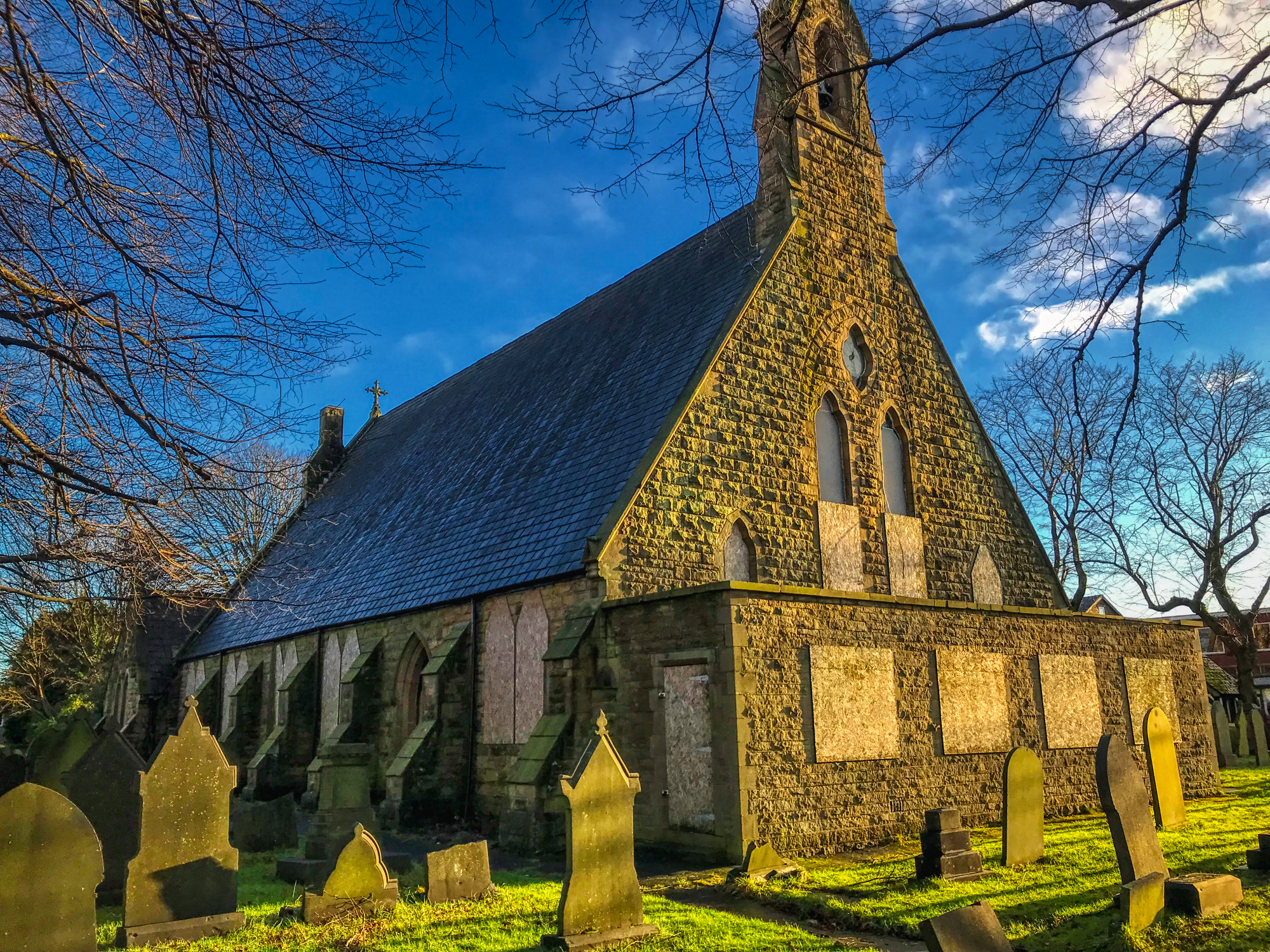 Even the windows atop that non-climbable building are boarded. My ladders get little use of late.

I don't know what this is besides a right mess of urban ruin sitting close to the centre of Liverpool. 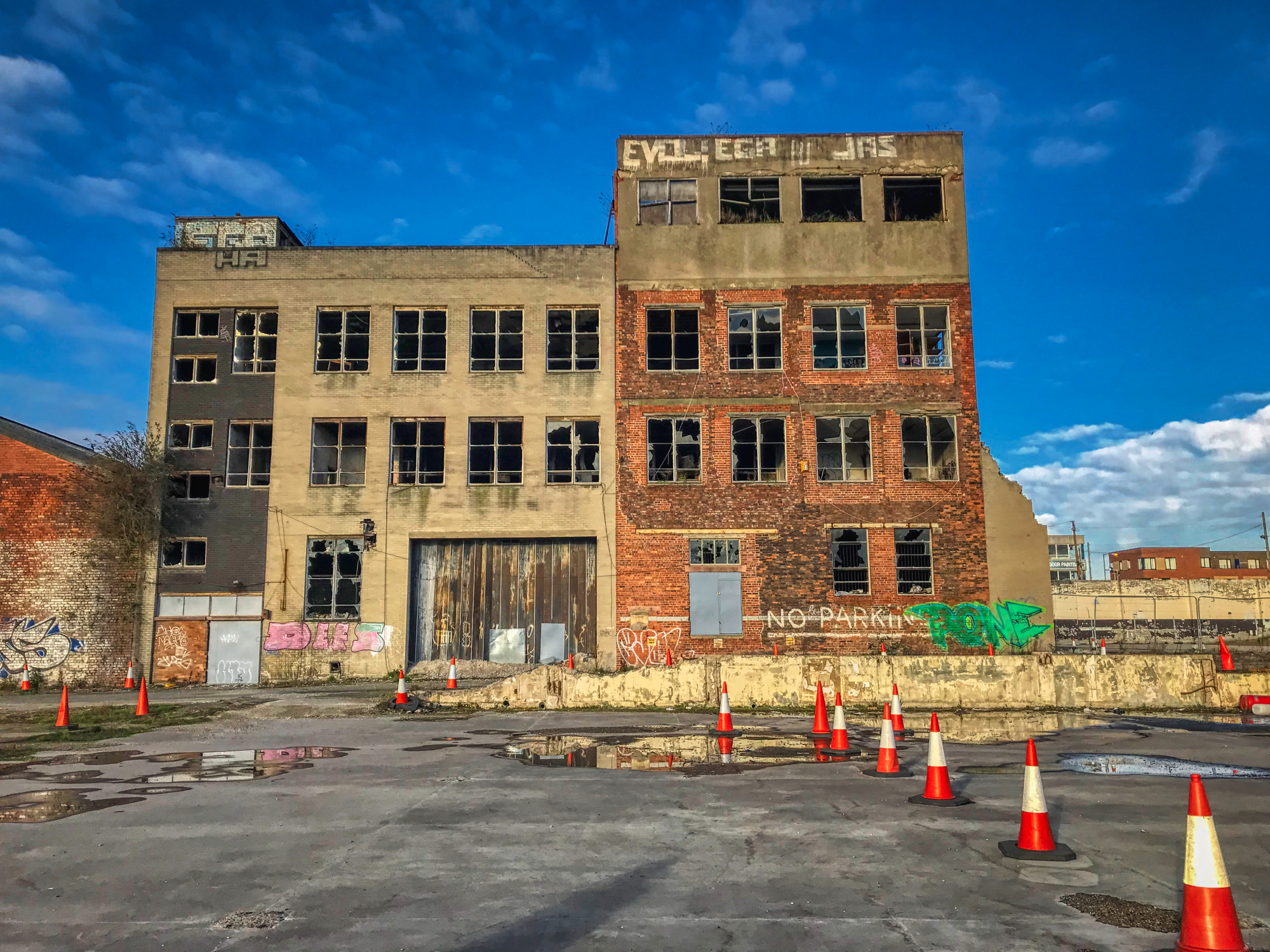 The city is famous for thieves, especially car thieves but what is in there that makes it so important to lock up? 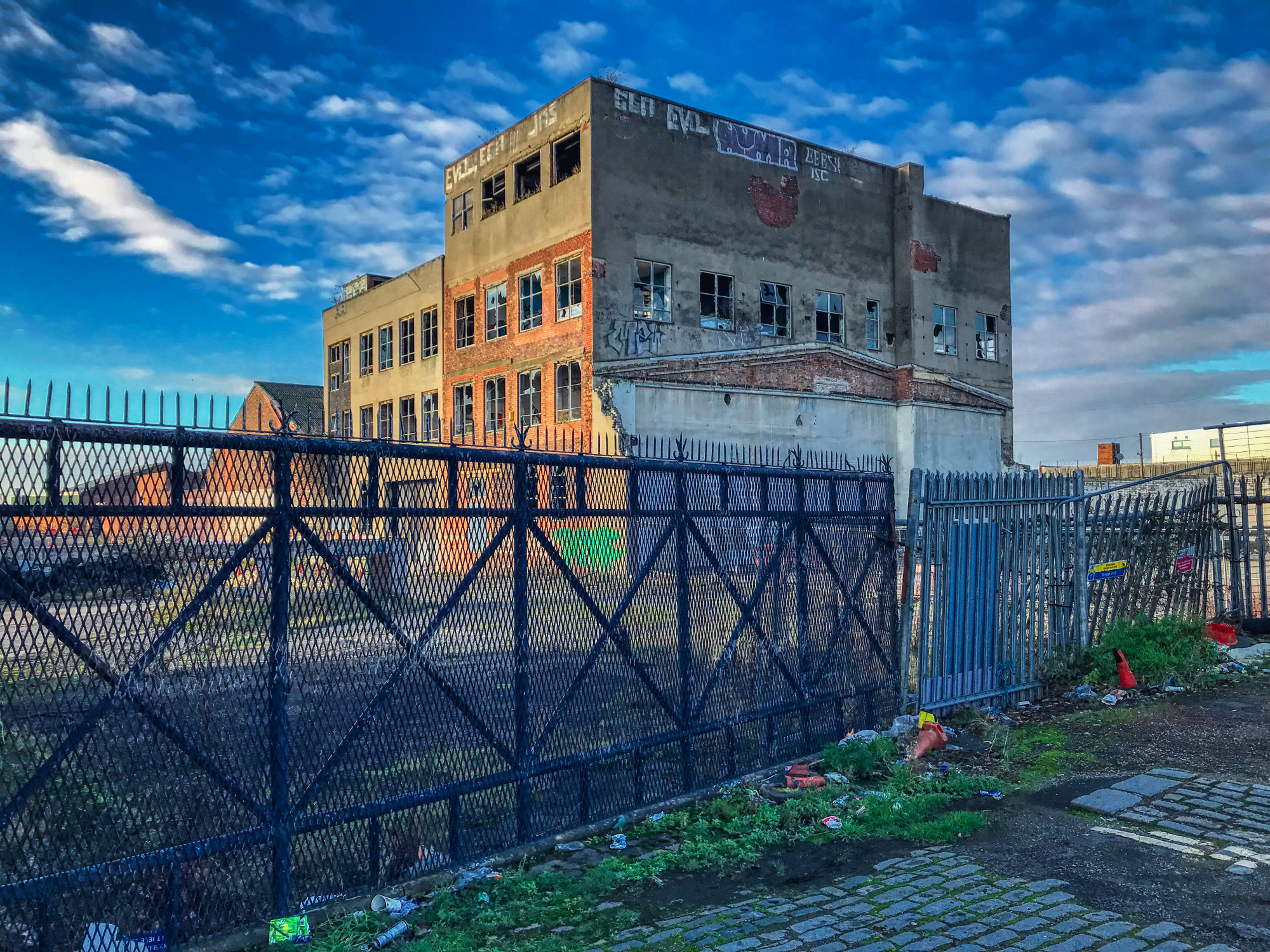 We gained entrance to the grounds to find high walls, and barred windows. 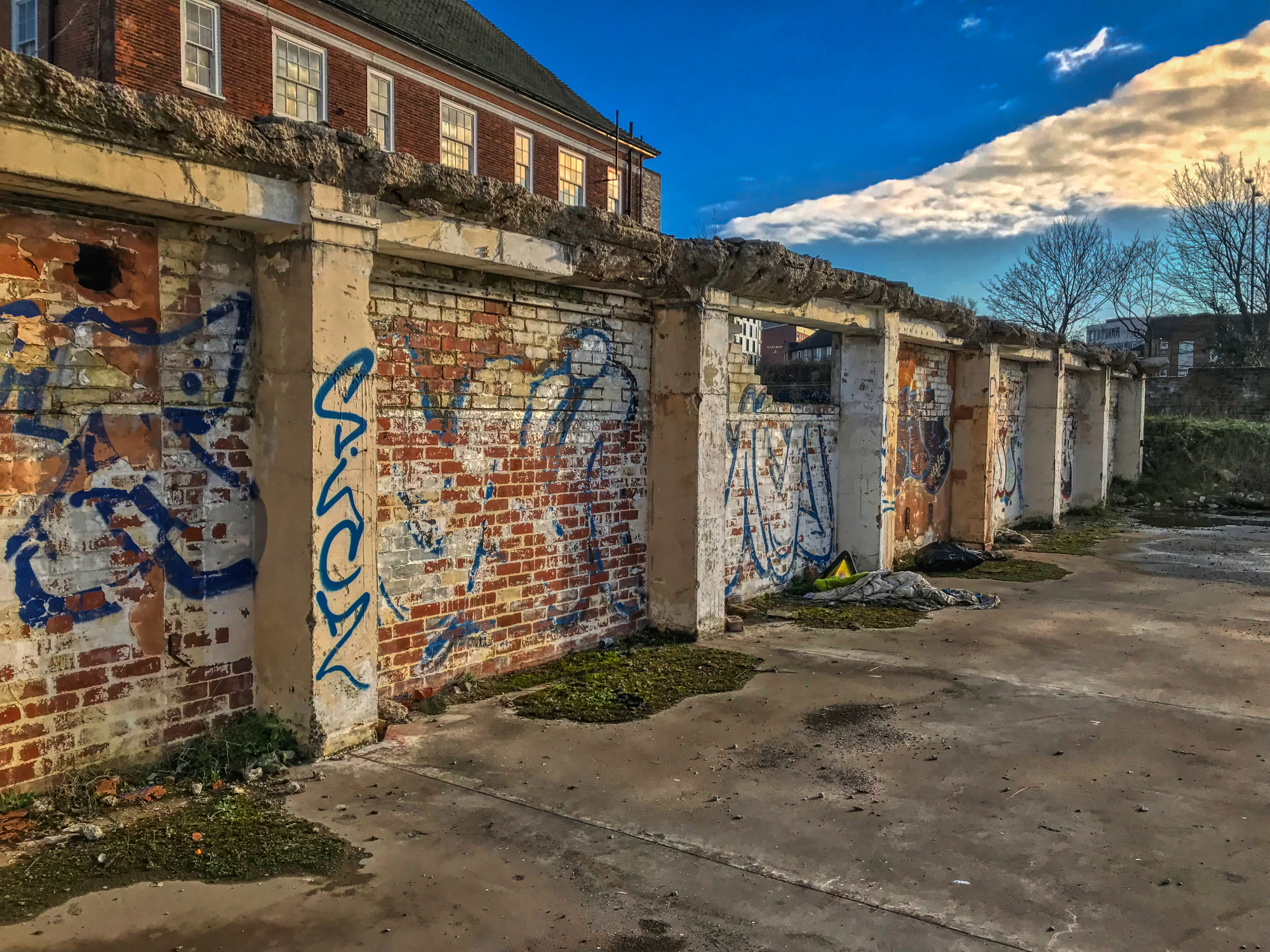 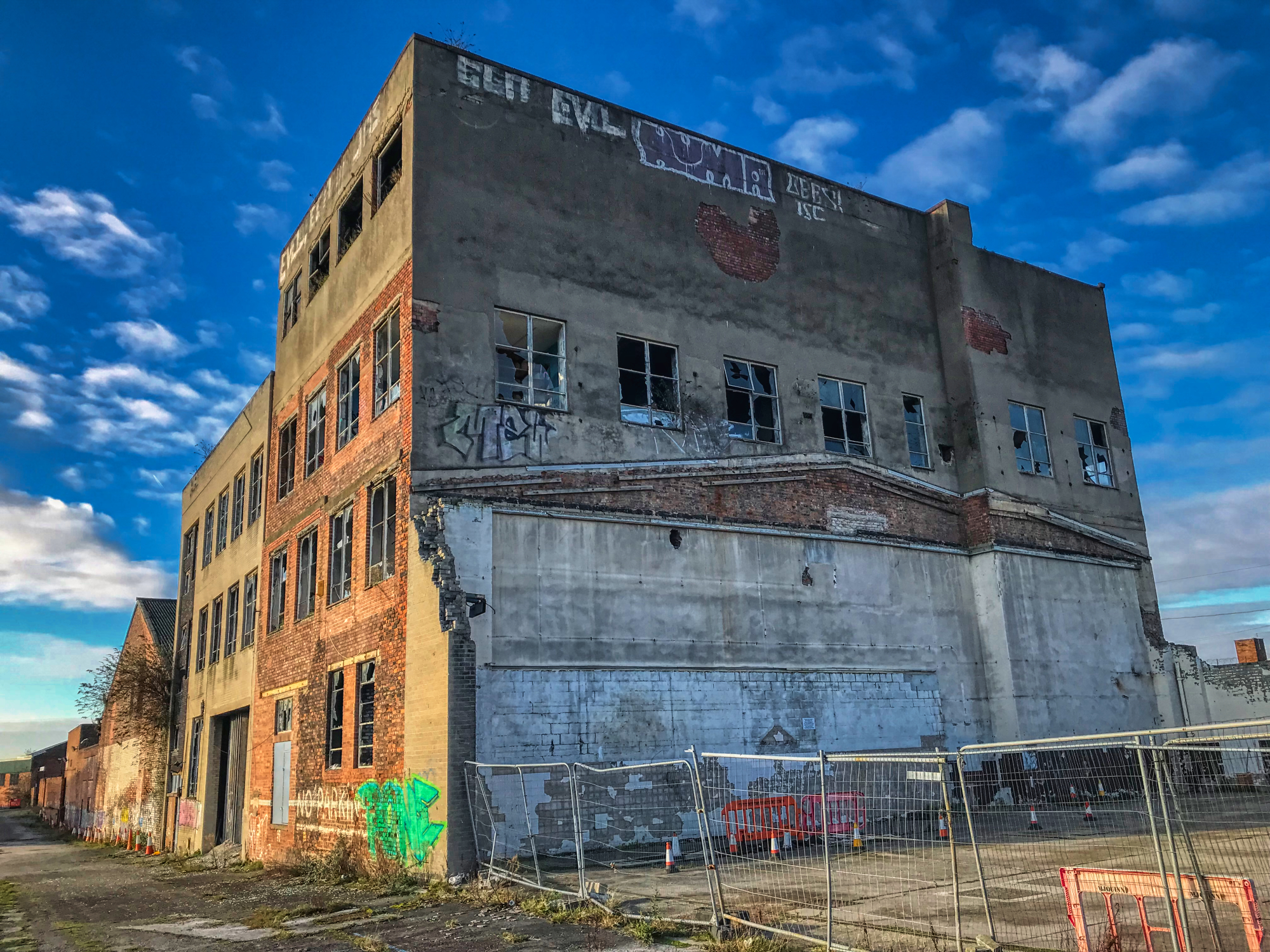 The yard at the end had a security van with a dozy guard who was listening to some music and looked semi-conscious. 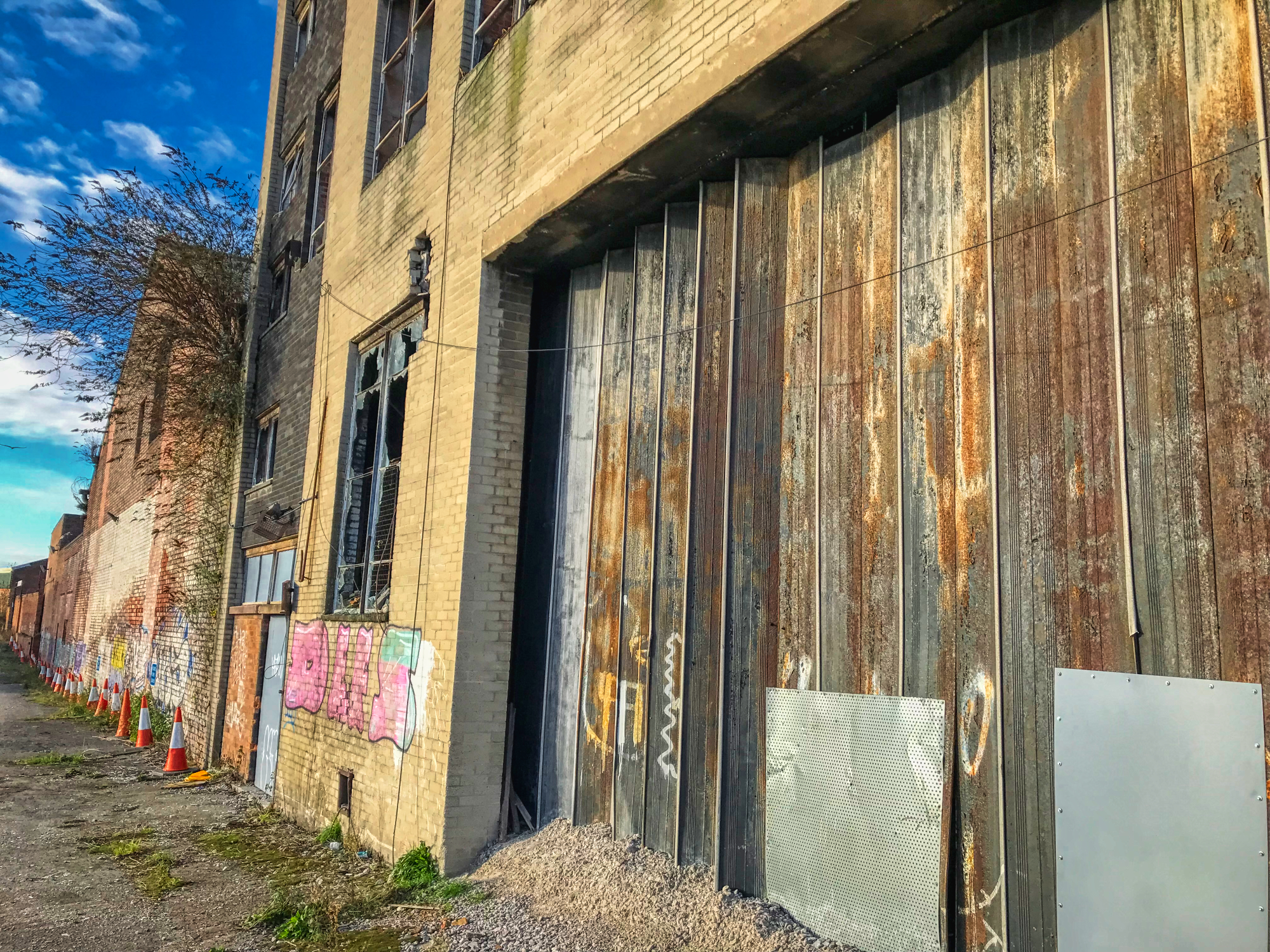 Should we have sneaked around him? There was little point as the yard was sealed tight. 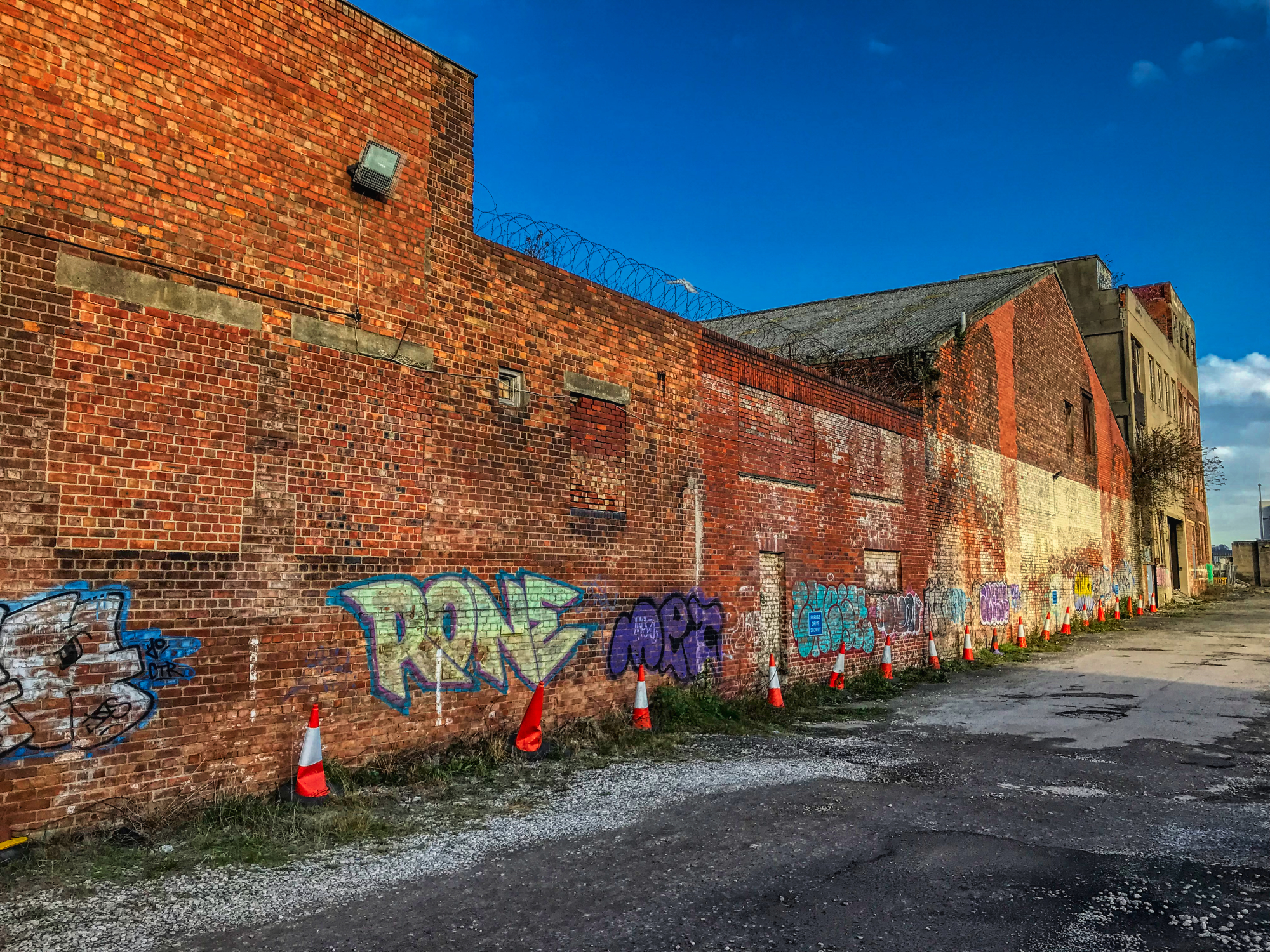 You can’t even get in wrecks these days, sheesh…

Many have tried and few succeed. We were in the dodgy area of Toxteth famous for its riots in the deep past and had to have a go. 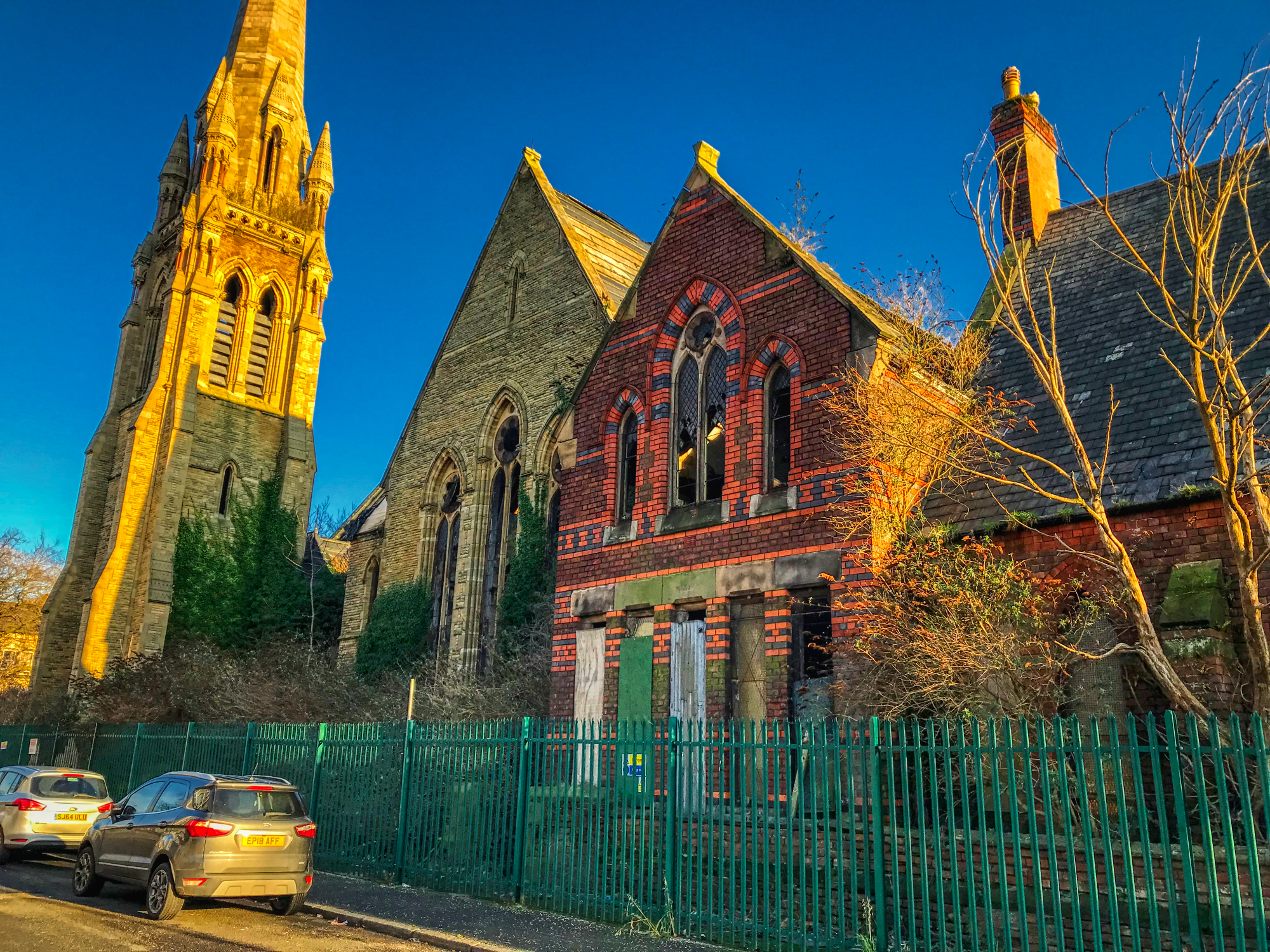 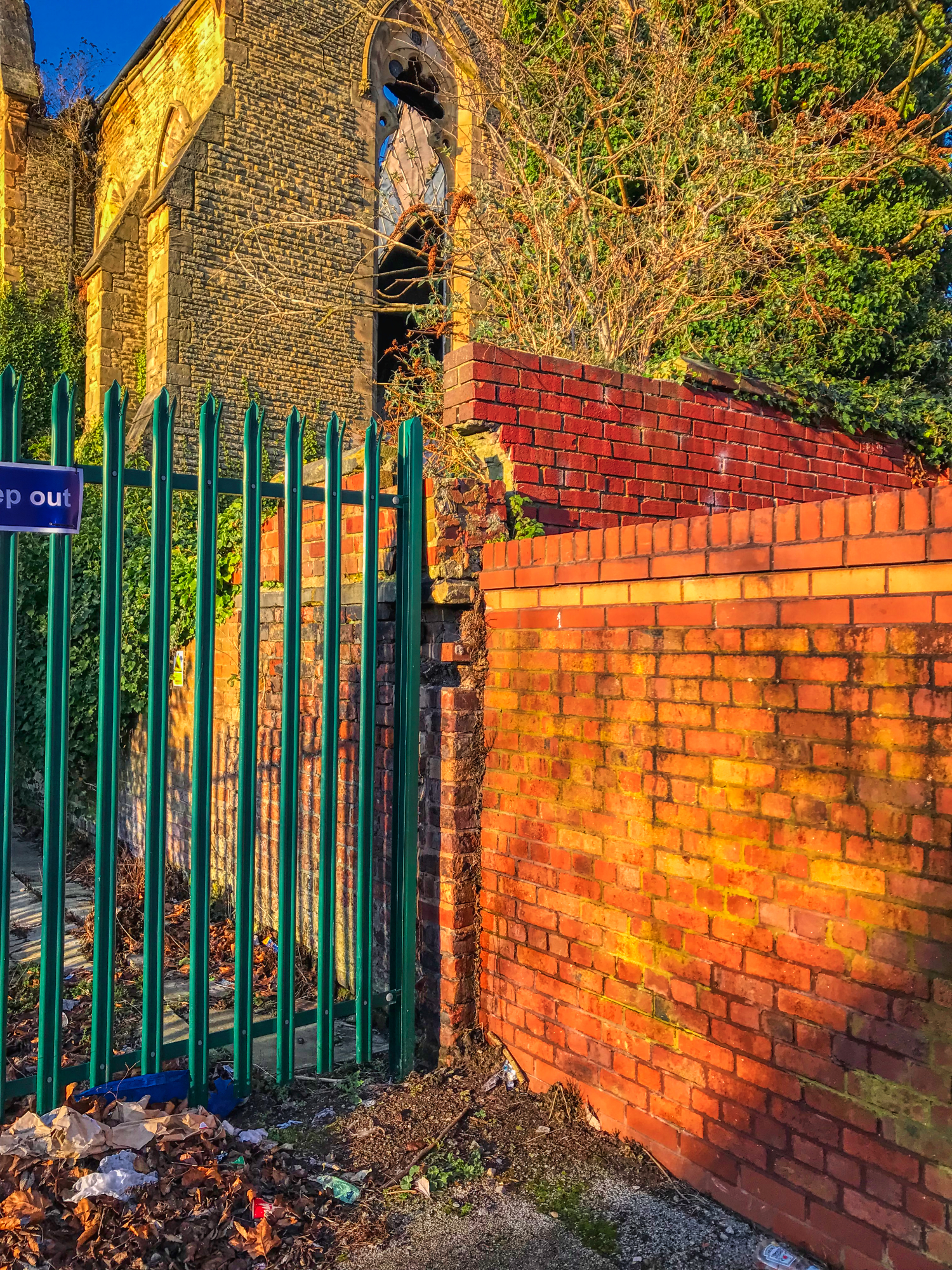 Over the wall is the way to go except that's someone's garden. Otherwise, we would be climbing over in a jiffy. 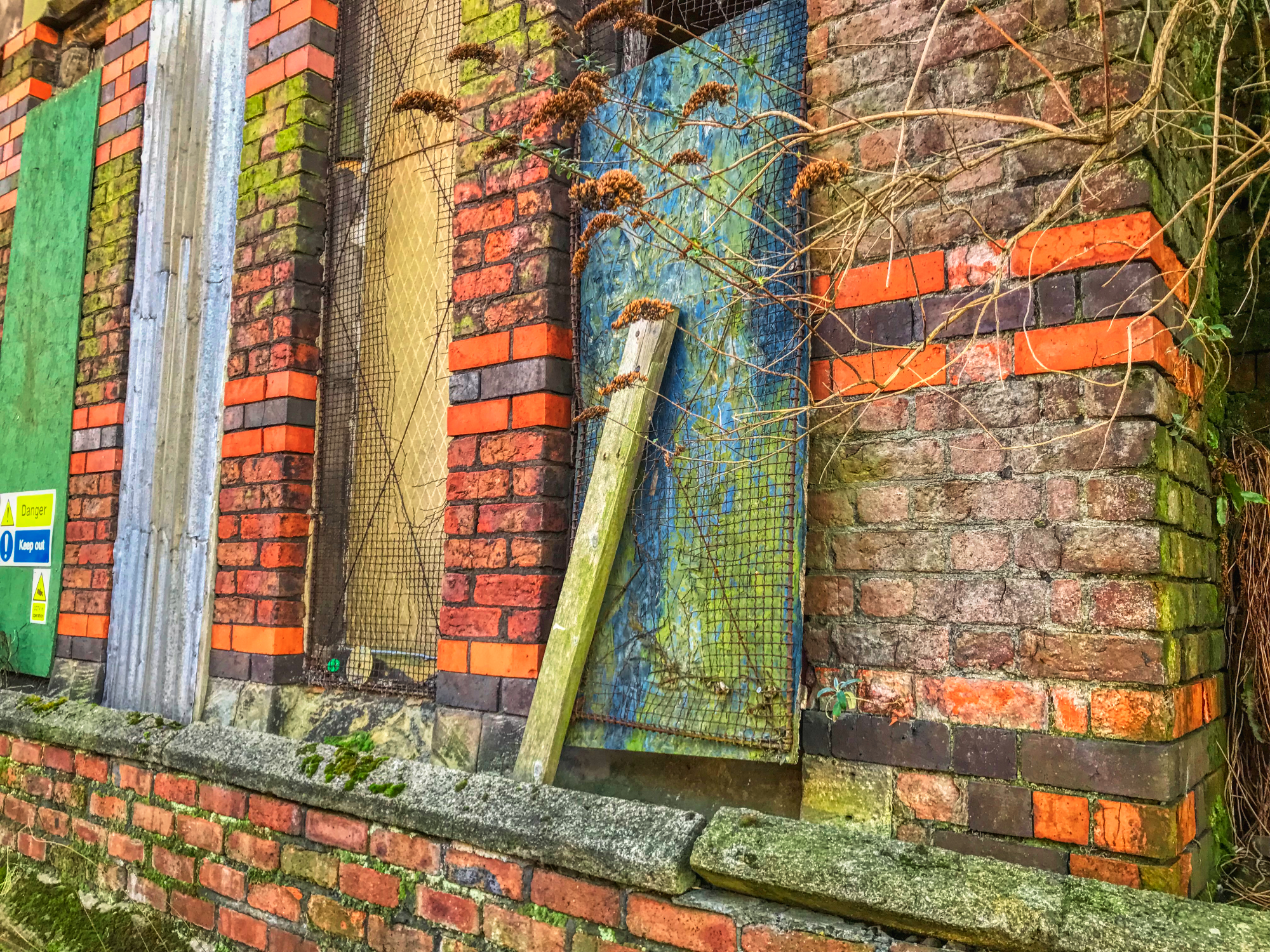 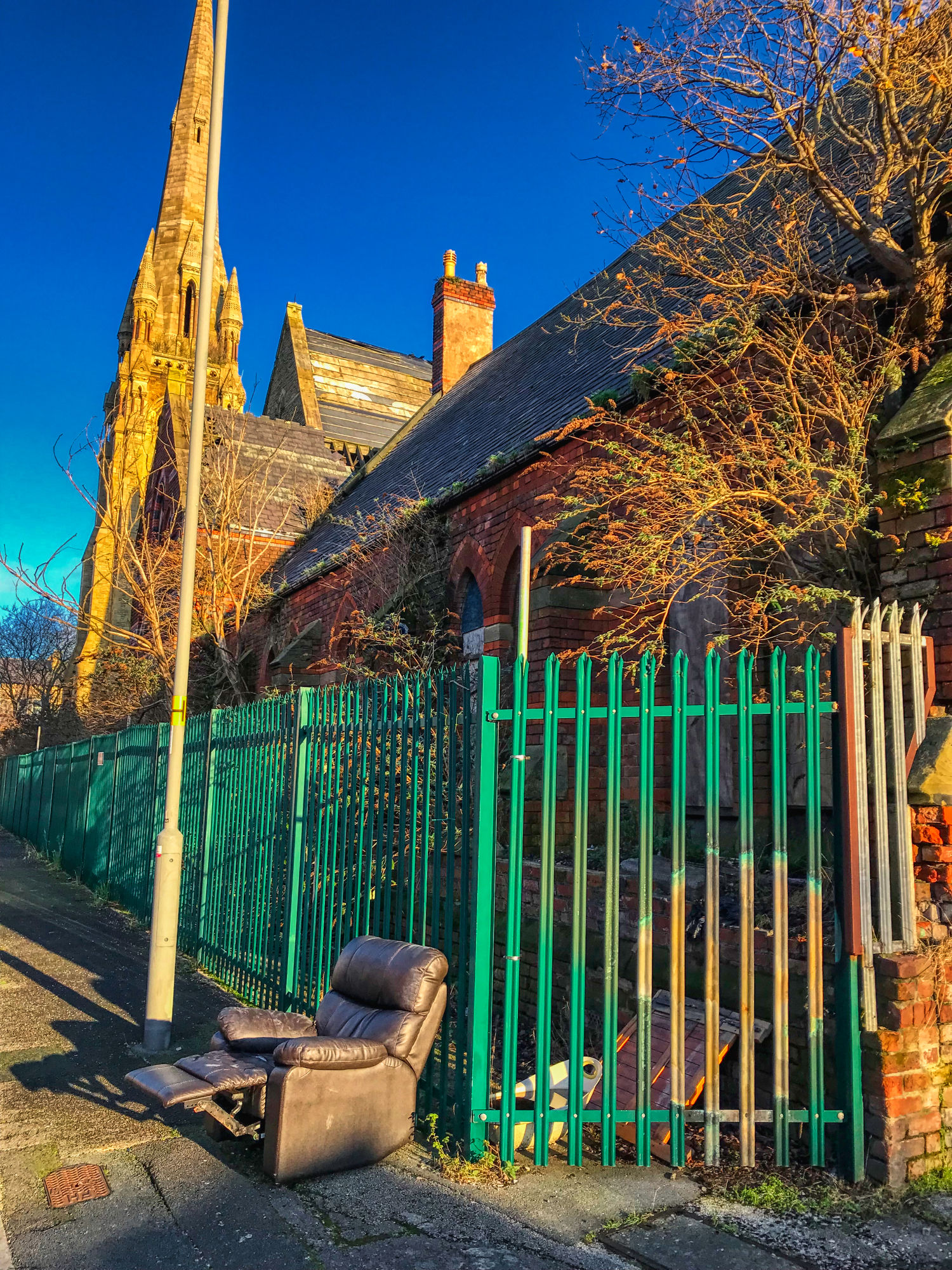 Scouring the outside proved quite fruitless. The luxury chair may have looked like a climbing utility but it was a hoax meant to trick and deceive. 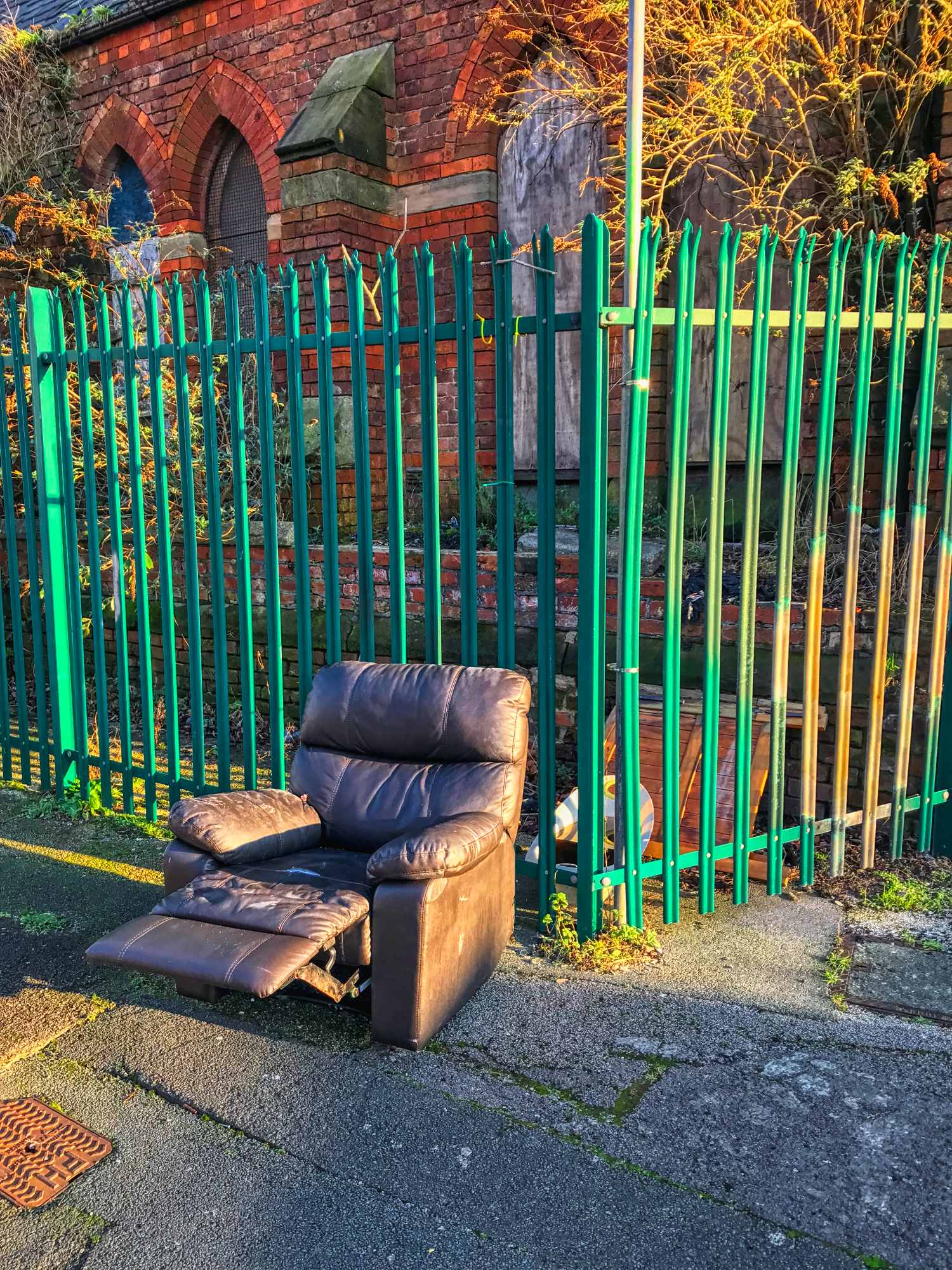 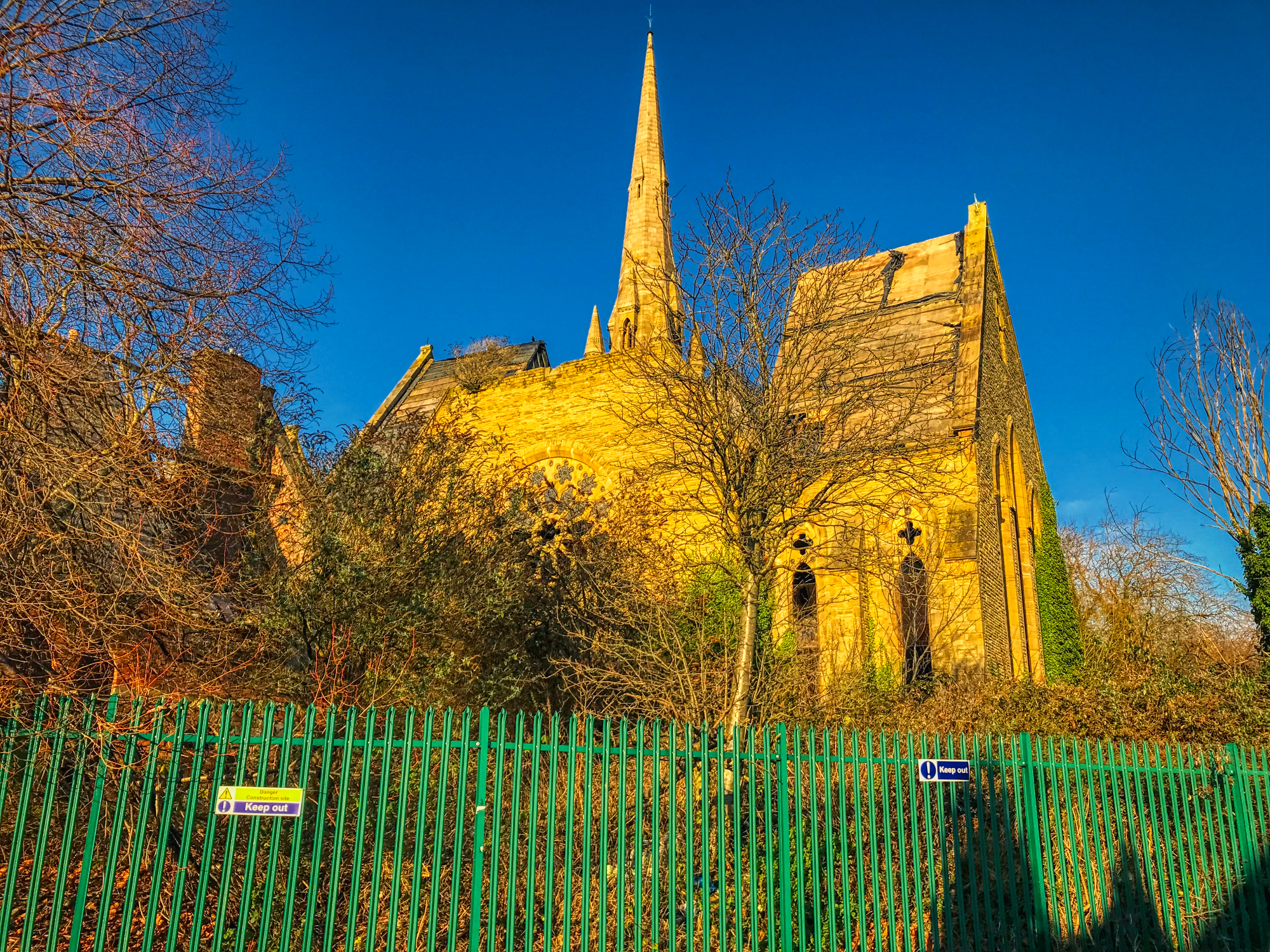 Look closer and you can see it’s not going to happen. If it was bouncy like a trampoline then maybe, but how to get out? 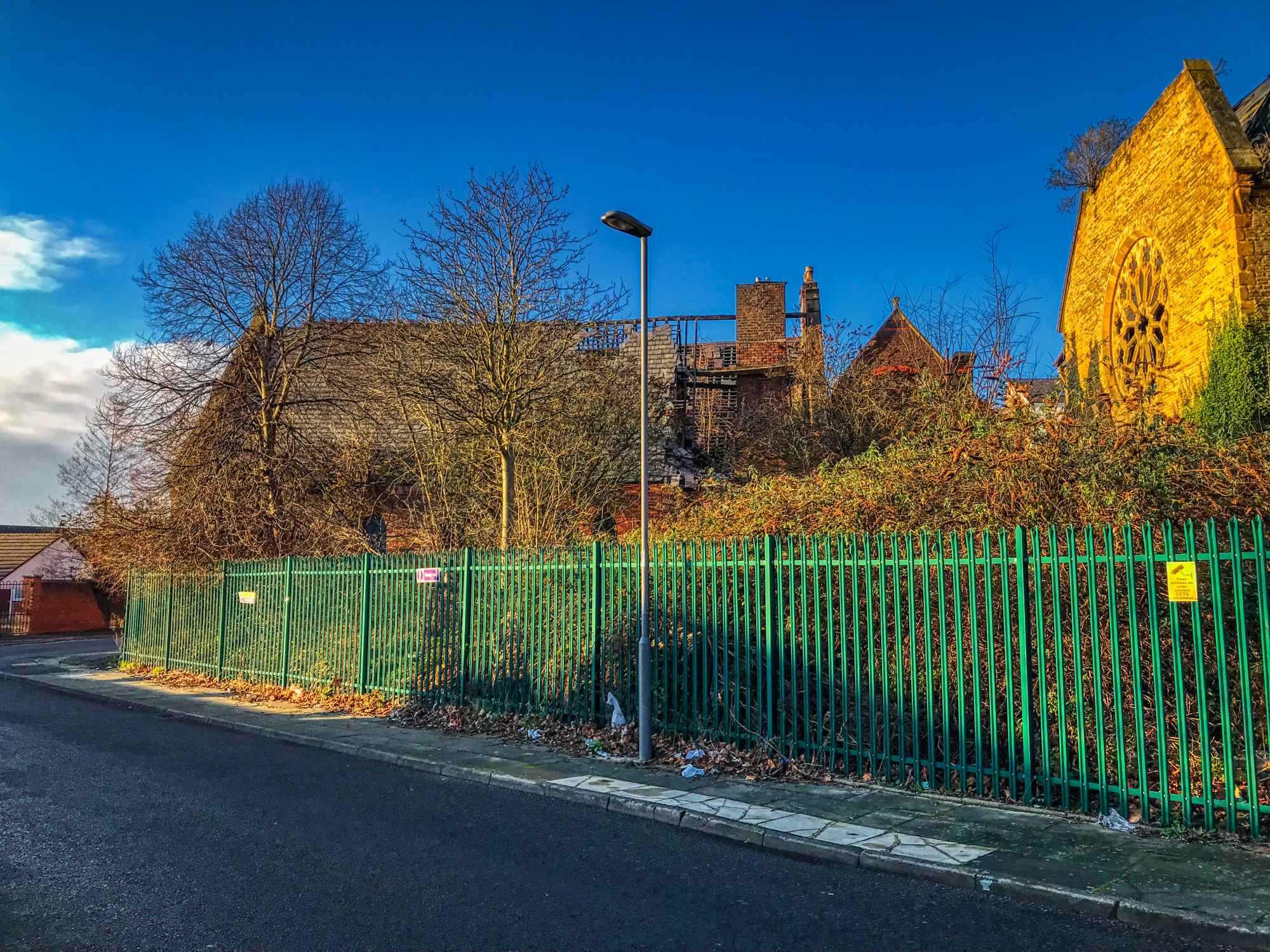 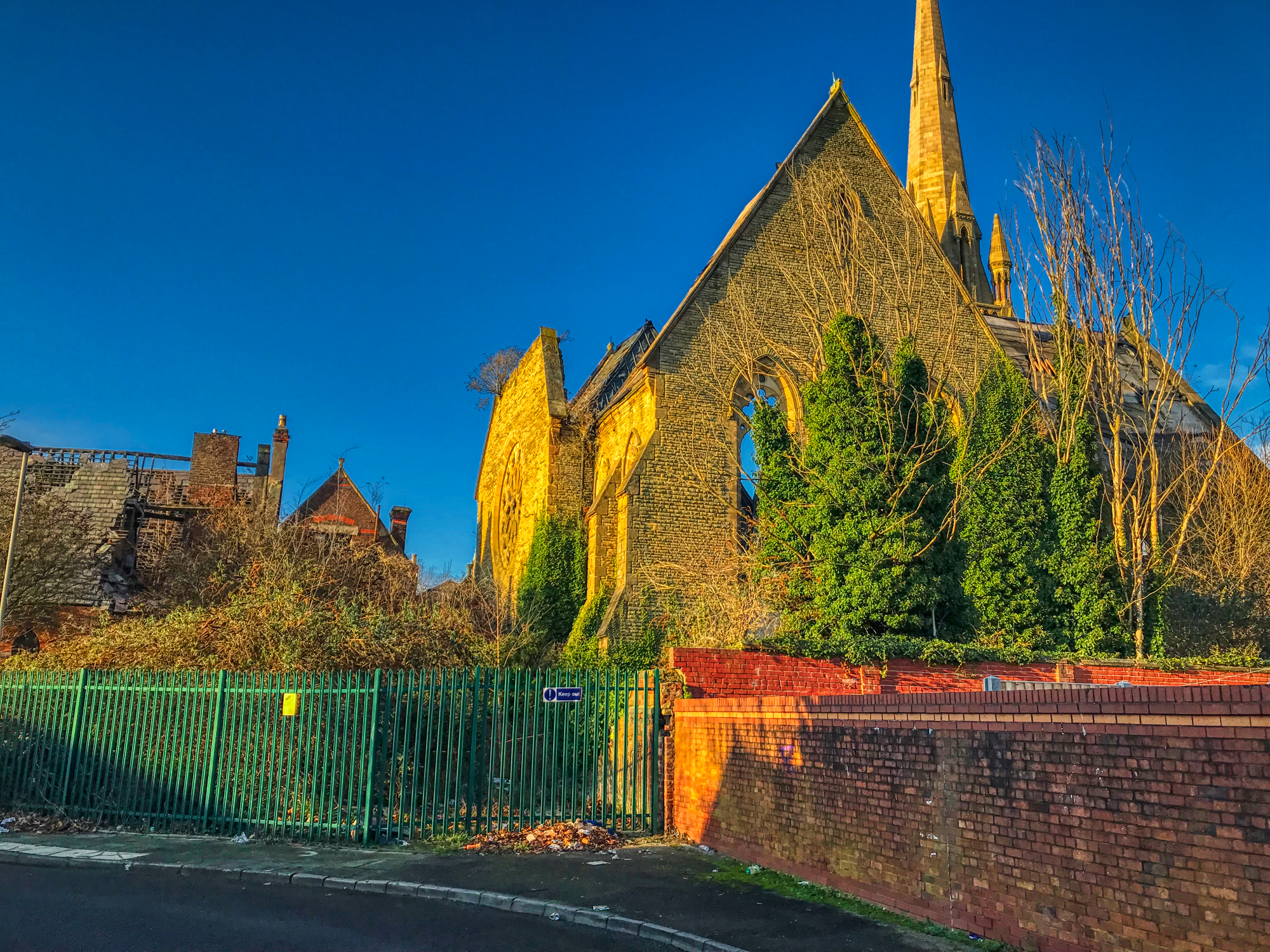 This is Liverpool and the locals like to lounge about on comfortable recliners watching the sun go down in the middle of winter whilst freezing to death.

That church and graveyard (probably sounds awkward), but it made me droll, so damn lovely!

I would use that chair to chill for a bit, it's calling me I can hear it. 😂

Over that wall was tempting, but angry residents not so. I'm sure they have seen many vault over there and I'm not so quick these days.

I can say it was tempting all over, I'm really impressed with your work you seem so dedicated to the Urbex and luckily you are surrounded with it.

It's a win all round. Urbex is something unique and if it bites you, its gets you hard and you can't get enough.

Those look like they could have been decent if you had gotten in. It's too bad that you weren't able to. I actually think the second church doesn't look like it is in that bad of condition. It is a bit surprising that it is all shut down. I guess we have some like that around here too. Parishes merge together and stuff and then they end up shutting the buildings down.

COVID closed many churches over here and lots failed to re-open including our local (not that I go). That could well be on my hit-list in the future.

Ah, good point. That could be part of it too. I haven't been to our church in probably two years. I feel a bit guilty about that, but I guess that is my problem!

I really love the edits you chose. HDR really bumps some of those shots up. Great work, !BEER for you.

Thanks, its more the software... not my shots!

Nah, just a tool. There's always too deep(halos) and you did this right.

Any post that has churches and abomination in the first sentence is a winner in my book!

St Huberts looks awesome, I don't think I have seen many churches built like that. I hope you don't have to take that lady to court! :OD

I suspect the abomination is a church for thieves!

St Huberts looks awesome, I don't think I have seen many churches built like that.

It's in a built-up area in Liverpool. I'm scheduled a visit soon, so may try again. You have to ignore the stares and get on with it!

You had me at abomination lol. Have you tried wearing a hi viz jacket and carrying a clipboard?

I'm sure the locals would ignore you as the many liverpudlians that I have the pleasure to know, tend to ignore any kind of authority figure. 😂👍

Have you tried wearing a hi viz jacket and carrying a clipboard?

In 2020, myself and @dizzydiscovery took this approach just once. Some local accosted us and asked lots of pointless questions about whats being done to the building. We pulled off the hoax but he cost us around 20 mins in time.. bloody arsehole!

Haha there's always one busy body to spoil our fun. I'm looking forward to scoping out a few abandoned churches at some point.

St. Huberts Church looks like a neat building with its red bricks and unique architecture. It doesn't look like most churches and also very different from the different angles. Very cool.

It is suitable creepy looking, I want in that one.. and will try again.

Ah well, can't win them all and I enjoy the exterior shots you get anyway. Nice light in some of those shots.

Mind your family jewels on the spiky fences.

We haven't been winning much at all lately @steevc. If Southport Grand Casino was not open that day, it would have been a real bust.

St Andrews Church looks great with sunset shines on it, I think. The razor wire does not seem old. Perhaps, there is a hidden enterance :)

That razor wire is fierce stuff. Just a nibble and you're bleeding. Its caught me a few times.

Amazing post, the pictures and the story what a work of art. I give support for you to keep doing this!

Abandoned churches are so creepy.

Lunatic Asylums are the bees knees for creepiness. I did one last week, and then got escorted off-site by security (after I got all my shots). Perfect timing hehe...

What if the fences aren't to keep you out, but to keep zombies in? After COVID and the threat of nuclear annihilation over Ukraine, nothing is outside the realm of possibility for 2022 now.

You've been playing too much Fallout. No Ghouls yet!

Well, we have 55 years before the bombs drop.

At least you didn't get your hub caps nicked , or is that just a stereotypical statement about the folk from the city of pity?

I used to get them nicked in the 90's, but its alloys now.. a tad harder to detach!

Your posts always entice me, thrill me then leave me feeling a sadness for humanity (in a good way I mean they are well done) but of all things, to see chruches thus, and to think of the ancestors and all the tidy streets and proud little families and ladies and girls in hats and gloves and cars on clean streets and then to see this...it's almost like scenes from WWII tho I supppose it's best not to talk about world wars just now, eh?

Any way, a lovely adventure per usual @slobberchops forcing me through a series of emotions for certain.

tho I supppose it's best not to talk about world wars just now, eh?

We are getting enough of that on the media. I look at the images and see places I have already been. There's not a lot of difference.

I like the outside of churches more than I like the inside. These were stunning, breathtaking -- especially the one with the moss gravestone. ugh, i am a sucker for architecture.

Most of them here are old, and some more photogenic than others. Inside they tend to be quite samey unless violated (which is often).

You captured them beautifully.

would love to do a church conversion .....