Timing depends on inspiration and old memories. Can I relate this specific song to something in the past? Simply adding YouTube links makes for dull reading, and there has to be more to it than that.

@steevc kindly sent me a script and the results of my old postings going back to 2018. I don't want to repeat content so was manually looking back and adding the older material to a spreadsheet.

Now I just need to find the bloody script. It's vanished within my file table somewhere.

Duplicating material is a down-voting offence on HIVE, and we don't want any of that shit happening even if the duplication is due to decaying brain cells and unintentional.

As @steevc saved me time (as well as donating the script), I will add him as a 5% beneficiary of this post. Thanks, pal!

I do wonder what Kim Deal thought of the ‘Surfer Rosa’ cover. Did she approve of ‘Rosa’ being such an eye-catcher on the front? I can't say I personally disapprove, but it was likely banned from some of the large stores such as HMV at the time.

Surfer Rosa is now acclaimed as one of those ground-breaking albums and is partly responsible for the Grunge era which would hit America and the world several years later. ...'Surfer Rosa is very well thought of; I am a fan but I prefer Doolittle'...
Source

My opinion on the ‘horror-sounding’ Surfer Rosa is that it is patchy. ‘Break My Body’ is one of the more normal songs, and at 2.06 in length set the tone and standard for many of their subsequent tracks on the acclaimed ‘Doolittle’ album which would follow.

The Pixies are reformed and still touring including in the UK. I had my chance to see them live some years ago when Kim Deal was still with the band.

After watching some more recent live performances of the band, with Kim’s departure and Charles not being the vocal powerhouse he used to be, I feel it’s now too late to enjoy the magic they used to wield.

I remember getting into Muse very late sometime in 2010. After listening to Absolution and thinking, ‘that was quite accessible’, I was shocked after listening to their ‘acclaimed’ masterpiece album as it had little effect on me.

Like many 'tough to crack' albums it eventually settled and I started loving 'Origin of Symmetry'.

"New Born" is written in the key of E minor' - Source

Many songs are written in minor keys now. If that's the case, why are most of them totally shit.. like Blu.., OK, we've been there before 😀

New Born was a single and reached number 12 in the UK singles charts. It was hardly a blockbusting hit but would have gained enough attention to catapult the band into the future success coming to them.

Now they are too big to see live, filling outdoor events, and besides I have not listened to any of their material post 'Black Holes..' Are they another band that sold out to successful popularity or did my ears not adjust to their new material?

Back to the weird stuff, you say, and I have to agree. In 1983 you would not have caught me listening to this noisy strange concoction of sound; it would have been something very boring such as Duran Duran, The Human League, or Howard Jones. I was quite normal then in terms of musical taste.

The second album by the Twins was a slight change from the horror-filled soundscapes of ‘Garlands’ and marked the departure of bassist Will Heggie. Robin Guthrie filled in on bass and the style in that area I feel is quite similar. 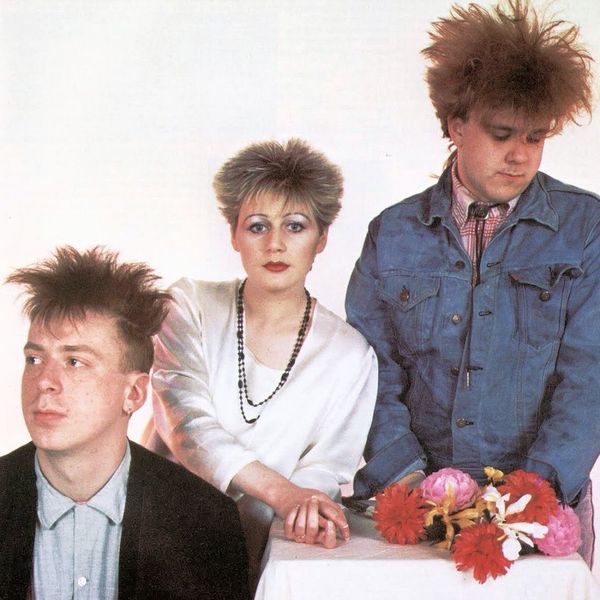 ...'many music artists had stuck-up hair in 1983 and hair spray was in much demand, meanwhile yours truly was working at Kwiksave as a slave'...
Source

Musette And Drums kicks off noisily and doesn't let up. The vocals of Liz Fraser appear distant and subdued.. a trait of their early material before all the ambient sounds started.

This one took me a while to appreciate. If you're listening to it for the first time, don't expect the Bee Gees, or else you may be disappointed.

I was late in discovering the Pixies, but I like what I've heard. With so many bands having been influenced by them it's hard to get the context of their original impact.

I did hear Muse early in their career when Muscle Museum and Unintended came out. I was into them for a while and eventually saw them at the London O2 Arena (aka Millennium Dome). They are a band made for stadia and they are good at that stuff. New Born has a good riff. Lots of bands will cover it, but struggle to match Matt's vocal range.

Cocteau Twins have mostly passed me by. I do like this song though. Definitely sounds like something from the 80s. I think every decade has creative things going on, but they don't always trouble the charts. For a lot of our generation the 80s was their peak music buying/listening time so there's a lot of nostalgia for it.

I think you saved me from my first zero comment post. I guess there are no music lovers left, even to tell me this stuff is crap!

Muse - They are a band made for stadia and they are good at that stuff.

Yes, I have seen some of their live performances on TV, they do look good.

Things have been quiet, but then I see a few people coming back after long breaks. Sometimes you just hit the feeds at the wrong time.

Music sweeps us back on memories, some great ones as well. Referring back to the 70s, seeing some bands live was a highlight.

80s sounds I was a wee bit busy with little ones did not recognize any you have mentioned above, nice to learn something new, although somewhat older now in time, music never ages.

I didn't see a live gig until the very late 80's, talk about slow.., and all the aforementioned bands I missed first time around. Story of my life.

Never too late to catch up now on your side they still entertain some great gigs.

Hey @slobberchops, here is a little bit of BEER from @joanstewart for you. Enjoy it!

I still love the pixies. I think they are one of my favourite bands ever. I have seen them numerous times but not lately. I liked their latest album which I only found out about by accident. Age, though, tis a terrible thing for bands!

I liked their latest album which I only found out about by accident.

I picked Indy Cindy about 8 years ago, but haven't bothered since. I know they have been active, I think I had a thing about Kim.., and she's gone.

I had a thing about her too. If I see girl playing guitar is any kind I go weak at the knees and is they have a haunting voice that's me sold!!!

You know, maybe Charles still has it.. the aggression in the chorus is as hairdryer as ever in this version, and that Paz does a decent job of Gigantic in another clip I saw.

And coincidentally that's my favourite song!!

Good choice, it's one of mine.

Music is a beautiful thing, it is said that without music would the world be complete well the answer is NO the world won't be complete, A world without music might just be a world full of aliens and zombies LoL taking us back the the 90s music really gives me goosebumps.

Music bring back some memories. Some sad some happy though. Nice to learn something new from your post. For me music stays forever

I was just thinking the other day I should listen to some more stuff by the Pixies. I really only know a couple of their songs.

Life appears to flow without effort when I am immersed in music, giving my eyesight a warm glow and thawing my mind and muscles from their perpetual wintering.

Nice selection in the music department, not so much in the haircut area ! I never quite got into the pixies at the time, but they have some crackin tunes !
!CTP

A script to search you blog?
Easy ;)
Use hivesearcher.com and type in your keywords. It searches all users post. By adding your own account name in format: author:@slobberchops the results are filtered giving only the result from posts and comments you posted. Here is an example, searching for 'music' in your post and comments: https://hivesearcher.com/search?q=music%20author:slobberchops (check what is written in the search field)

Thanks @edje, there are so many independent dapps written it's tough to keep check of them all.

true, but this is one to bookmark :) from goodkarma, the ecency guy. still wondering why so few services/dApps didn't integrate this search engine into their own service. fully free of charge, open-source search engine. and around already for a long time. enjoy usage of this one :)