Finally Completed My Earth Quest And Got A Reward

For weeks I have been stuck in completing my earth quest. This is majorly because I don’t know how to use the earth cards. I preferred using the fire cards because they seem more destructive, I mean it’s fire. But then I needed to use earth cards to win the quest and get my reward. 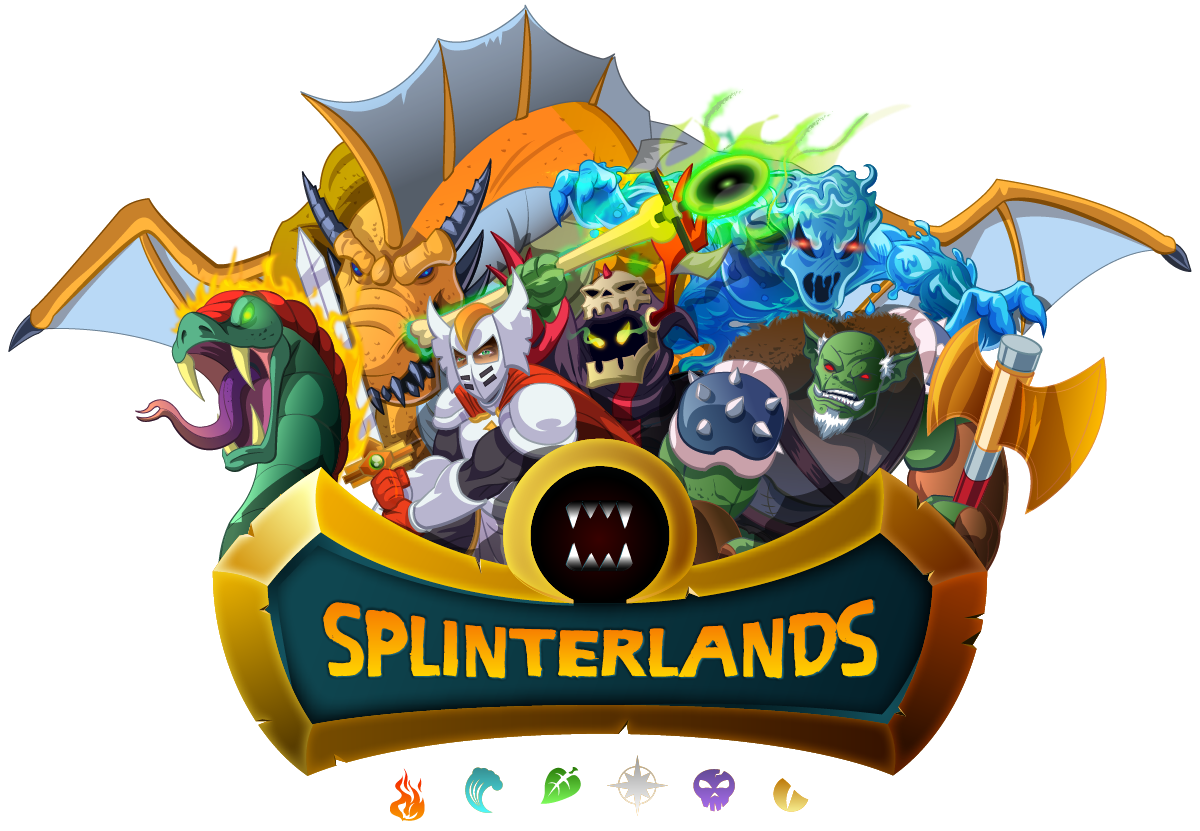 At first I didn’t know I had quests to complete but always see that I get rewards for completing a quest. But recently I decided to give splinterlands enough time to understand the game better.

It’s beautiful on how you can achieve a lot if you put your mind into it. So I have been telling myself that completing the earth quest is too hard, because I felt I couldn’t use the earth cards. I decided to play the game once or twice daily to complete the quest. 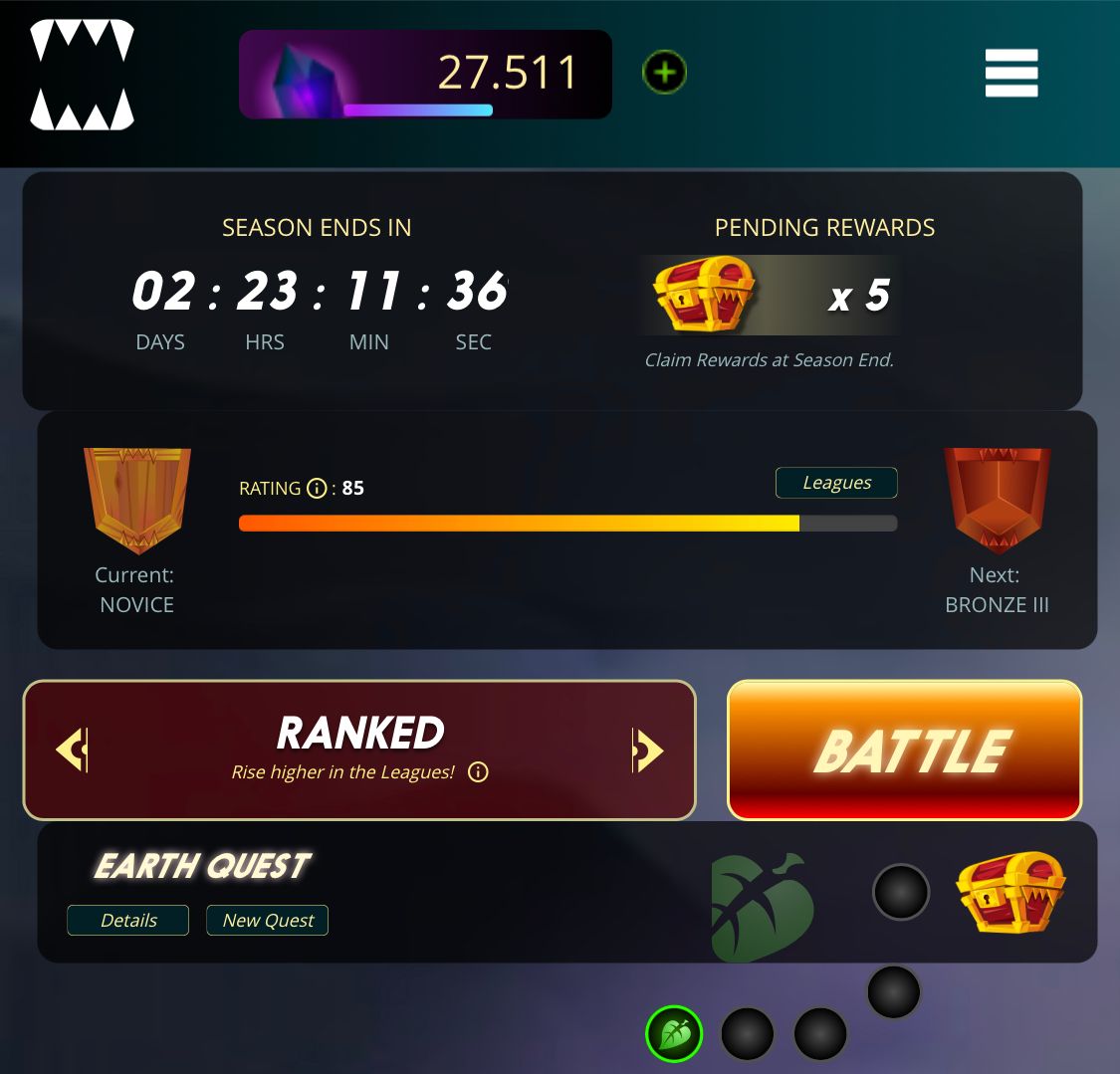 The image above was my progress on the earth quest. I won one battle using earth cards and that was a mistake. I can’t remember how I did it, but I did it. 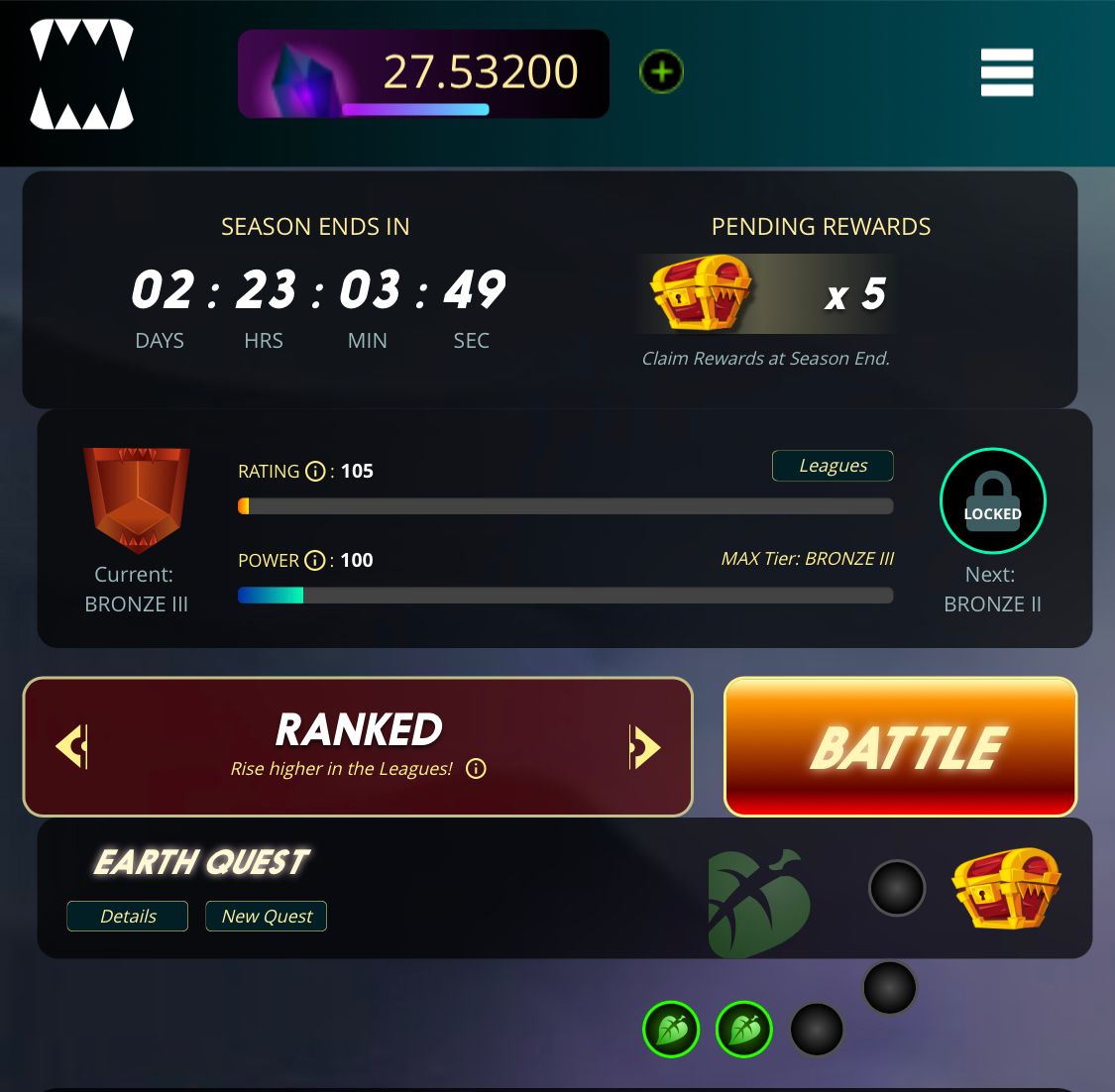 Few minutes later I won another battle using the earth cards, I smiled because I thought I had gotten the hack of the game. Then I continued plying trying to win more and complete my earth quest. But guest what, I lost most of them. So i decided to use other cards because I hate losing in games. But today I decided that I will complete my earth quest and finish it before today runs out, i can’t continue being on one quest for 3 weeks. So I took my phone and went on splinterlands and decided to play it. I got my ass beaten so many times, but my mind was made up. I was going to win the earth quest today. I’m not giving up. 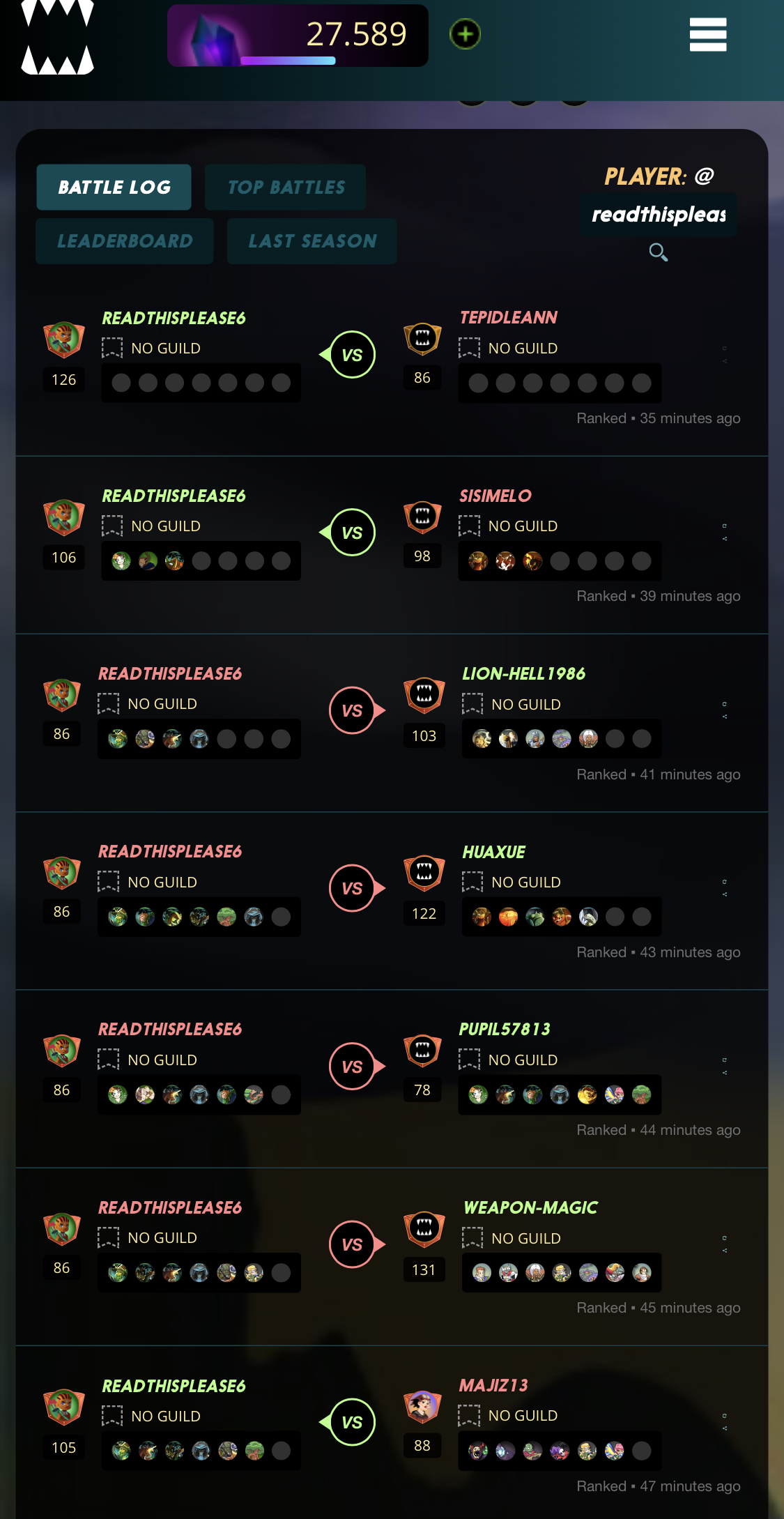 These are my lost battles. You can see how I got on the green zone few times. But I wasn’t going to give up this fight. 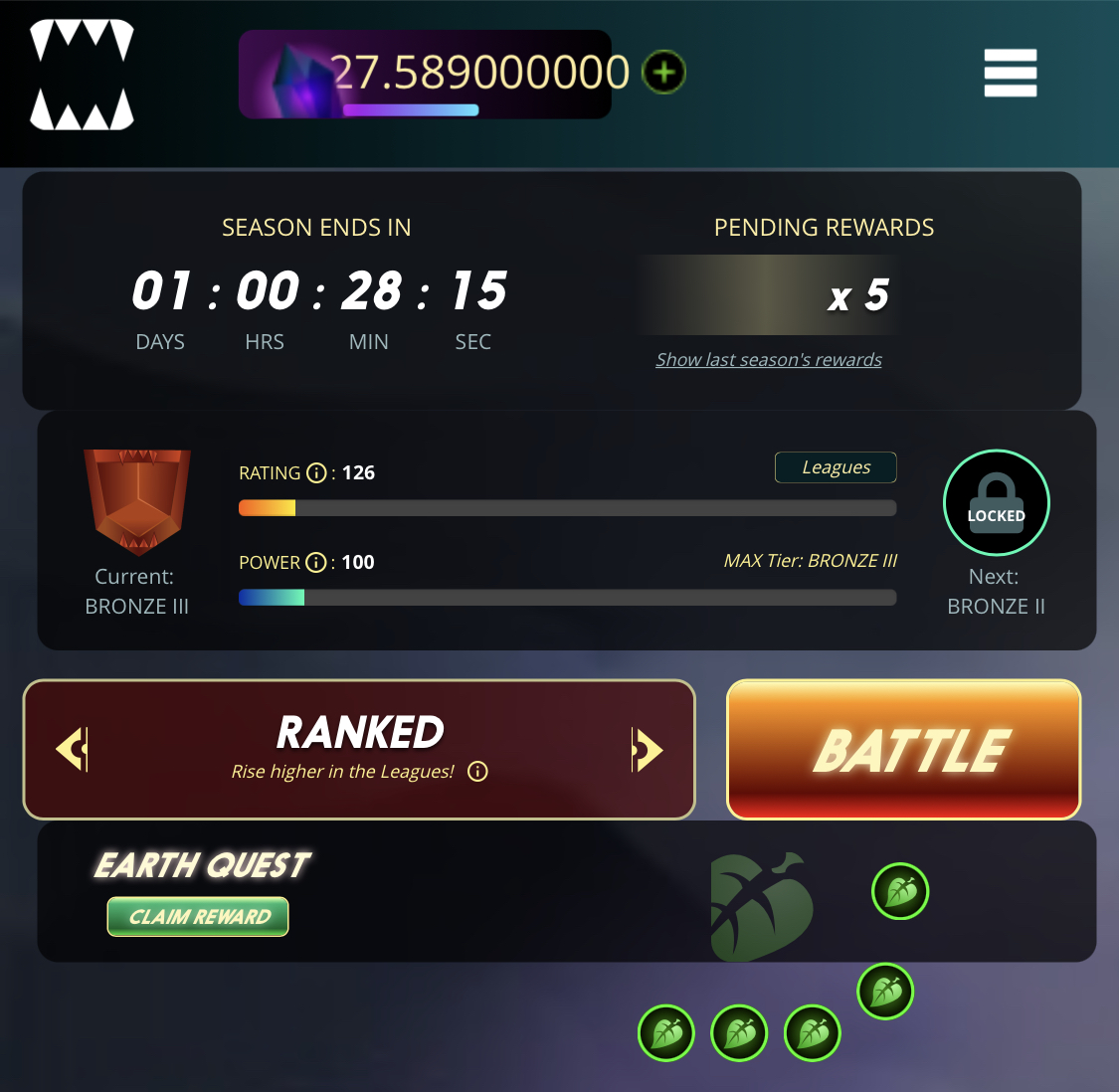 Then I finally won three battles using the earth cards. I was so happy. But the most exciting feeling was claiming my reward because I was curious to know what my reward was going to be. I claimed my reward and it was a demented shark card. 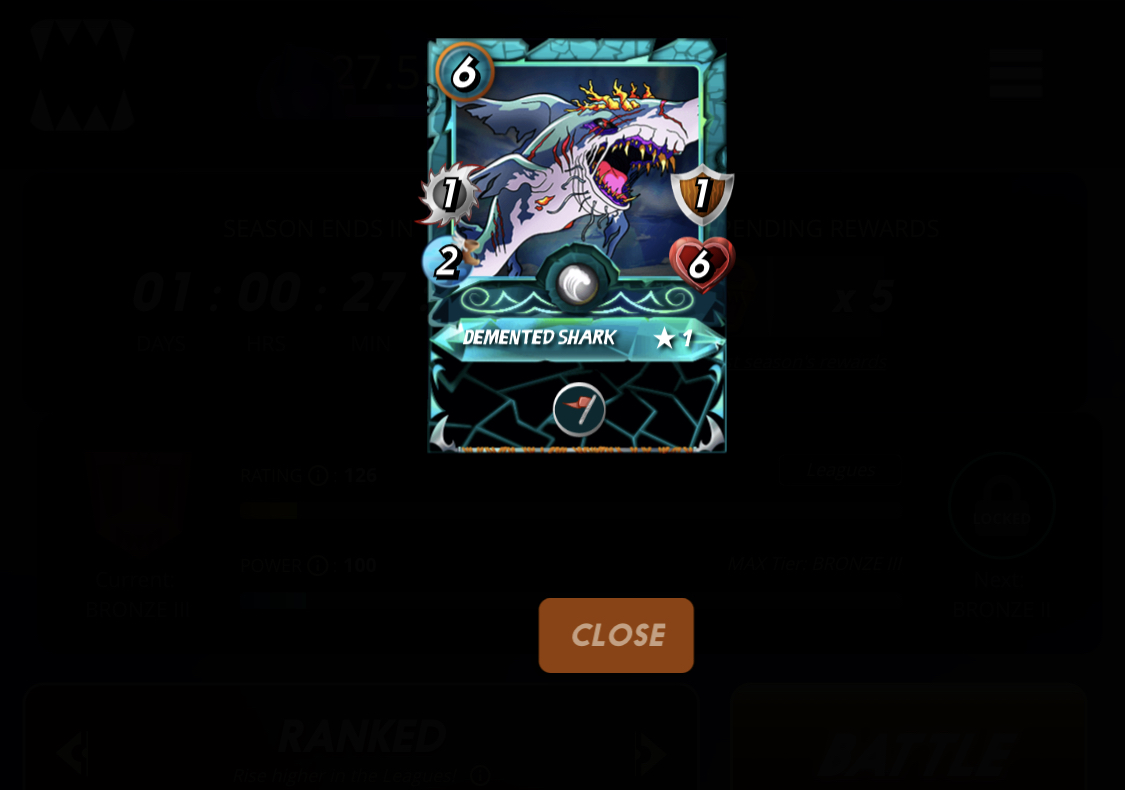 This was nice because I already had 2 demented sharks earlier on. I read the importance of combining cards and how it helps your card get new abilities. So I combined the demented shark with my other 2 combined cards. 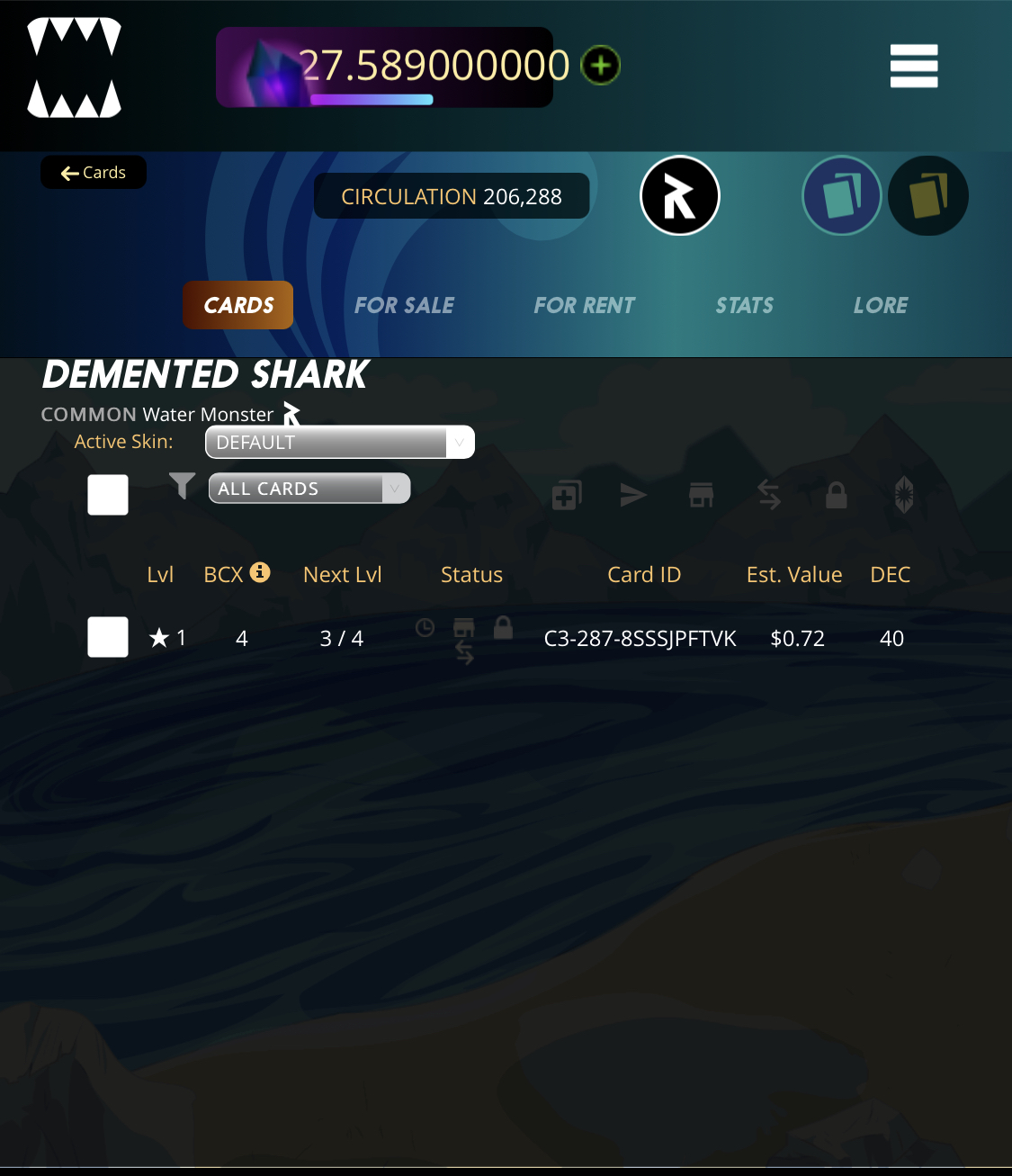 Giving me a 3/4 level. But I still don’t know how I can use the card and the difference it will make when i use it. Will be happy to hear your suggestions on the comment section.

Ah the earth cards... Yeah, they're a pain to use in battle especially if you're just using the starter cards.

If you click on "STATS" in that line next to For Sale and For Rent, it will show you how many cards you need to combine in order to level up your card. Plus, it will show you what statistics change on the card as you level it up.

Also, if you scroll over the little flag at the bottom of the shark card, it should reveal a popup that tells you using that card will increase the melee attacks of everyone on your team by +1.

As for earth...I was fortunate to get a couple levels of Mylor before prices skyrocketed so I basically use him and his thorns whenever I have to play earth. It seems to work pretty well when I use the Stone Golem in the first position. I then usually end my team with the Tree Archer guy who has 1 range and 6 Health. In between depends on how much mana you have to work with. When possible, I try to use an opportunity card or two and/or snipe and sneak. I let the thorns work on my opponents first position while I try and take out some of his back row with my opportunity/snipe/sneak cards.

If you do that, you should probably win a few more battles than you've been doing.

But one thing you need to keep in mind, before the battle starts you can look at the 5 previous lineups your opponent used. Well, he can do the same for you! So if you're using the same splinter and the same cards every time, your opponent can see that and design his team to counter it. THAT's why you're losing so often. You need to switch up your splinters so your opponent has to guess what you're going to use. If he goes all melee and you've got thorns going, guess what? You're going to kick his ass.

Wow!! This is a lot, can I chat with you on discord?

@readthisplease 68
about 1 month ago (Edited)

What about your 4 digit tag

Sent you a request