@pouchon 77
about 2 months ago (Edited)
LeoFinance 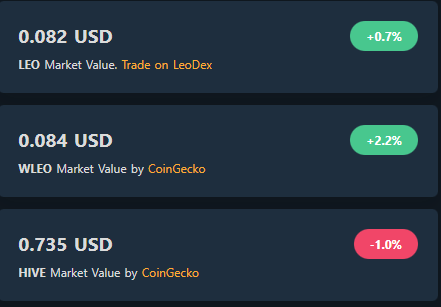 I subsequently think this could be a first of the month affair to see Hive rises and then slowly went down. I checked from the last two months. I see a pattern but not similar the way I think it could be. Now every passing month offers a different atmosphere for this blockchain. We are getting more and more into the mainstream crypto world. Believe me the way Leofinance team is working proves we are moving one step at the time.

You probably heard the news about Microstrategy. Mr. Saylor is focusing more on crypto for the company. I do not fully understand his role but that way his ideas will be less on the way the company is running for his ideology on BTC. Maybe more services for blockchain could be the goal for #MTSR. Glad to know they are not selling at the present moment any BTC. This alone could send the whole crypto down.
I think the best case scenario, they need to slow down and control their business. As the time passes crypto does react to the news. I was hoping to see a continuous move for BTC to climb to $25k. This is not the case. It could be too early knowing the implications the market plays into crypto.

Just one negative action can change how August will project itself.
This morning I saw Leo token trading at 10 cents almost 11 cents. I wrote a post about it at the beginning of July. Indeed Leo token did rise from 5 cents then. It is trading around 8 to 10 cents. Due to the heavy lifting from #VEXpolycub and the new addition to #CUB finance it will bring awareness to Leo.

I am so amazed to see Hive and HBD part of CUBDEFI. It shows time always right and this is the moment. Now are you finding ways to use the bridge in order to use the two DEFI?
I know the key to success for both reside on the liquidity factor.
One way we can resolve that. Use them and bring Hive and HBD into them.
That should help in the short term. The long term is all about consistency and I know we will get there.

I’m happy to see that hive, leo, hbd are all heading in a right direction and we must keep building because bear are for builders

Something needs to happen.
The leverage the community provide stands to reward everyone in focus to get this community moving.

Massive value add to the entire Hive ecosystem by incentivising HIVE and HBD liquidity with their own reward token.

Imo, the LeoFinance team doesn't get enough recognition for this outside of our community.

You know it is business. As long we say put this is what decentralization stands for.
Hive, Leofinance we are moving forward.

Hey @forexbrokr, here is a little bit of BEER from @pouchon for you. Enjoy it!

I agree that it is amazing that Hive and HBD are now part of Cubfinance!
I think Cub is a sleeper token, and I don’t have enough of it!