Some Wookie pictures and notes on taming cats

@nikv 72
about 1 month ago
HiveCats 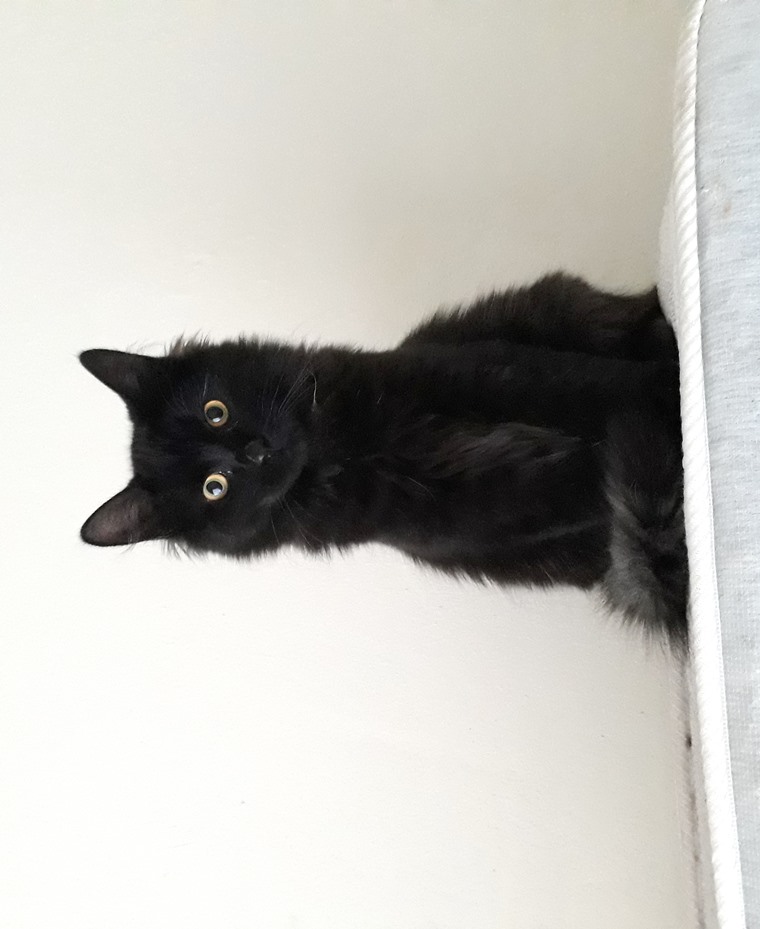 Wookie is just over 5 months old now and I photographed him in his old spot on the top of the mattress. Although he's little, it's clear that he's grown a lot in the last 3 months. The woman at the shelter is amazed at how well he has turned out: she really thought he'd be impossible to socialise. What helped was having him in the cage with his mother in an entrance, where he felt safe and could observe humans without being mistreated and his mother's calm presence helped him to relax. Once I got him home, he bonded quickly with me and then I was lucky that my tenants, who are animal lovers, helped him to deal with the idea of other people by allowing him to interact in his own time and not forcing themselves on him. Because he's young, he overcame his fears quite quickly. 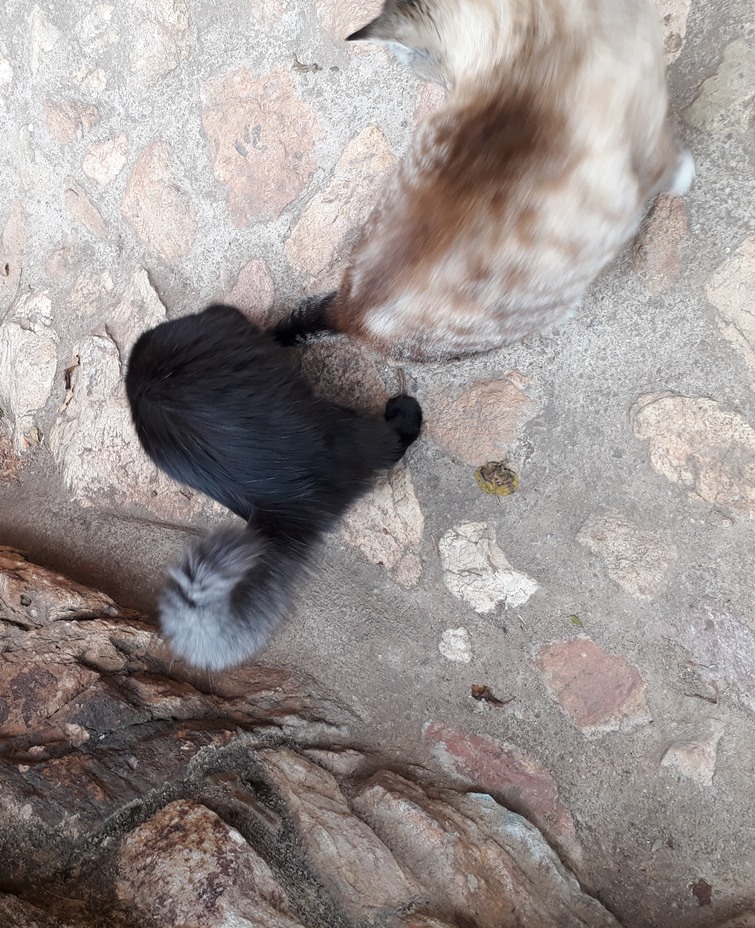 That cute little grey tail of his has earned him the nickname of Squirrel and he's busy biting Toffee's tail here. Below, Peanut getting ready to repel the invader. I was less fortunate with socialising Peanut because at the time, there wasn't anybody else around that was willing and able to introduce themselves to him slowly, so he is still scared of other people although I think that's also just his Siamese nature. He's far from being a purebred Siamese cat but does behave a lot like one: he's quirky, active and vocal. 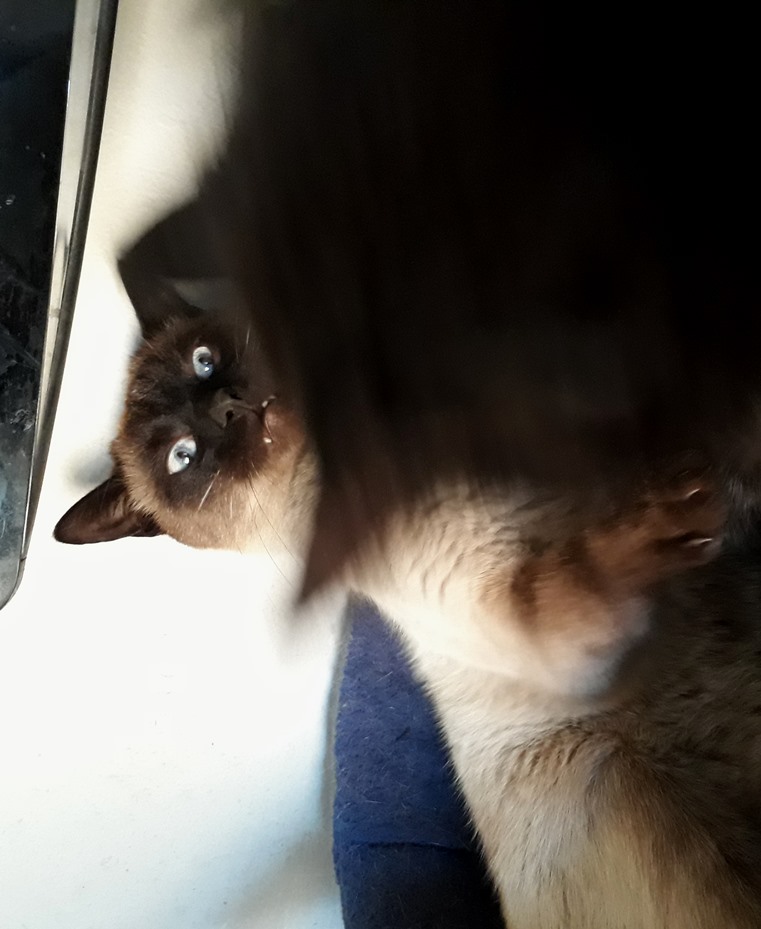 Up the tree outside my neighbour's place 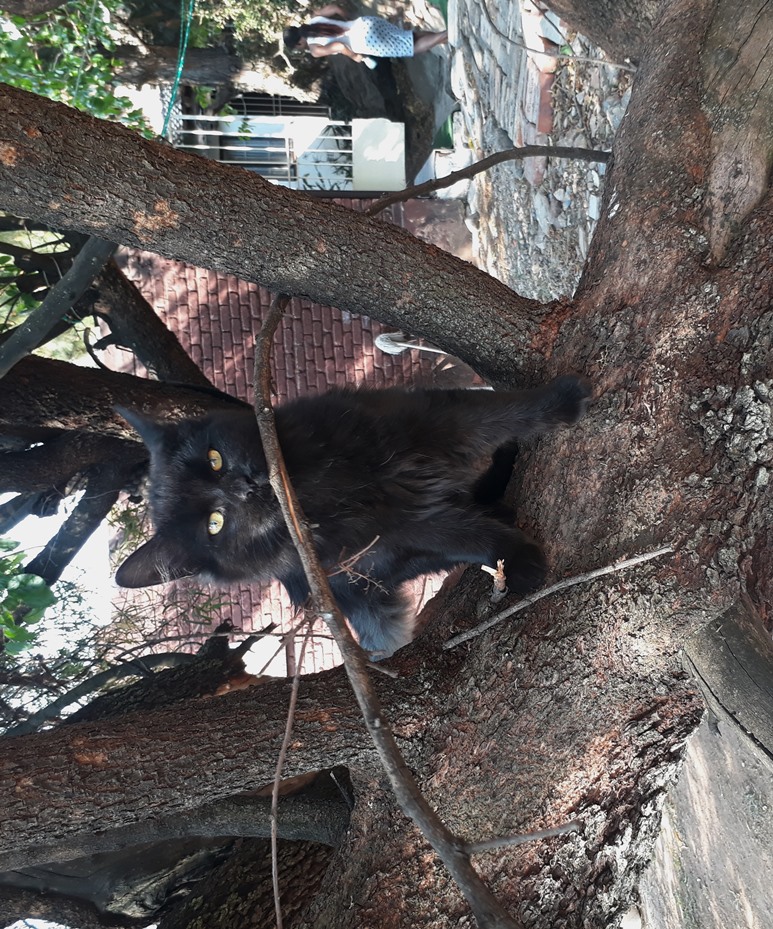 Young kittens like Wookie and Peanut are relatively easy to tame and socialise because although both were abused and traumatised, they started life inside a house and only needed to learn different things about people whereas older strays and feral cats take a lot longer to tame. 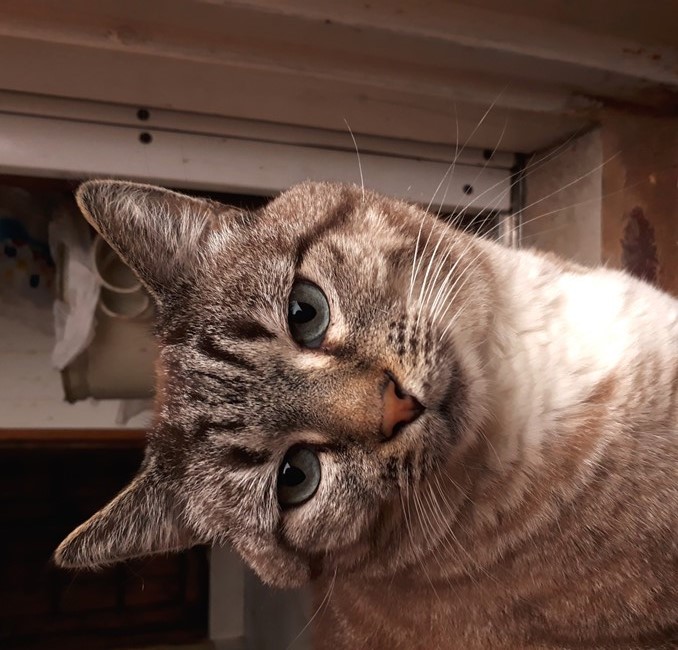 Toffee, pictured above, was living rough close to my house when I moved in and he'd sneak inside to eat whatever leftovers he could find and spray urine for months but I couldn't catch him. He had a similar-looking brother who was even more elusive. I borrowed a cat trap but by coincidence, the day I brought the trap home, he limped inside while I was there, hungry and exhausted and all I had to do was close the front door, let him go upstairs and lock him in the bathroom. From there, he was fed and caged in the morning and taken to the vet to be neutered although no cause for his limping could be seen. I kept him inside for a week to rest and recover and fed him up and didn't interact much with him. Once I let him out, he disappeared but 3 days later he returned, hungry and limping badly. This time, I decided to tame him and locked him in the bathroom again and he had to have another vet visit because he developed an infection from fighting during the three days he was away. For some reason, the antibiotic treatment also cured his limp - he must have had a deep-seated old infection somewhere in his leg or paw.

Taming him required spending time in the bathroom every day, without trying to touch him, to let him get used to me. He was often aggressive if I tried to touch him and then I would stop interacting and leave the room. Eventually, he became more relaxed, his aggressive male hormones subsided and after a month I let him out and he remained around the house. Teaching him to trust again has taken years. Although he was obviously someone's cat, I think that he was also mistreated and his 8 or so months of living rough didn't help.

He needed the period of enforced taming for his own health and safety because cats like him don't have the luxury of time. His brother died around the same time: I hadn't seen him in months and then there was this smell... He was nearby all along but like most stray tomcats he probably died from infected wounds after fighting.

Oh, Wookie with this cute grey tail :) He has grown a lot 👍

He's doing well :) I've never seen anything like this grey tail on another cat. It's very cute

Hello friend. A pleasure to say hello and what better way than with some new kittens. I love to see that peanut is so big and cute. And now you have this new sweetheart at home.

Hell @gertu, nice to see you back! Yes, I have a new kitten that loves to play with Peanut

Thanks for the your cat stories. I compare yours to mine and see what I do right and wrong. Each cat is different but like you say time is the big ingredient. 😺🙀

I doubt you have done anything wrong. I still don't know how you manage 11 cats

May lose one, Bear. They have taught me to have patience, understanding and above all love.

Last we spoke, he seemed to be getting better. What's gone wrong now?

Doctor said other than removing one bad tooth and 3 others she saw nothing wrong in his mouth. Blood work was good. He started eating much better after the operation. But soon has gone back wanting to eat but can't. His tongue keeps coming out of his mouth like something is bothering him. I told vet I fear a tumor. See told me to bring him in for x-ray. I could not get him to put in carrier. He was eating some but yesterday he ate very little. Now I have to wait till Monday to see if I can bring him into doctor. I fear a tumor in the throat. I don't thing anything can be done for that.. He is a cat that never gave me any trouble. Thank you for reaching out, I appreciate it. Bear and his mama

I'm sorry to hear that. Don't jump to worst case scenarios. Tumours are less common in cats Bears age and it's possibly a complication of the tooth removal he just had. I have also had cats get gingival hyperplasia, which is a benign overgrowth of gum tissue that prevented them from eating. Fingers crossed for tomorrow, make sure that his mouth is examined thoroughly

Thanks @nikv(( His mouth was examined all looked good except for small spot. doctor said she took small biopsy to have examined. She said didn't think that was much of a problem.

Good. Cats are quite prone to aggressive Squamous cell carcinomas in the mouth but if he's already been checked for that, I don't think you should put it back on the list just yet

I managed to tame an older feral cat, but it took me a good year of coaxing him closer with food while outside, then up to the closed back door, then up to the open back door. My dog was the biggest problem - Freddy would skedaddle if he saw the dog - but eventually I fixed that too. It has been very rewarding. Freddy is the most grateful cat I have ever had. He still bites lightly if he's startled.

Wookie is so good looking! I love that first shot of him.

All of my cats are from abused or feral backgrounds. They are different and feisty but like Freddy, they are always worth it.

Jax, our Siamese and latest birthday boy 9 years old last week. Is very illusive when it comes to anyone besides us in the house. He becomes invisible. And will not come out for hours afterwards.

A landfill rescued dumpster kitten who somehow survived a compactor truck crushing/suffocating his siblings. An eye infection so sever he should be blind. His eyes still are weepy, but such a cross eyed deep blue.

Like you say about trusting humans again. It has taken many years for him to trust just a little. He may never fully. And the sound of plastic bags rattling still freaks him out a little.

Sammi Jo helped him to integrate into our home as shown here... He is our older version of your Peanut. And used to be a lighter color until about age 4-5.

My rescue kitten back in June that was much like your Wookie has found a great life with a Man and his son who worship him. Great kitty homes like Ours are hard to find. We love You CatLady @nikv for all you do. Thank You from our kitty hearts to yours. We save them and they save us, I think

It takes a particular set of skills to tame a stray cat, feral or not. You surely have a lot of patience too...

Maybe the skill is just having the same nature as the wilder ones.
I couldn't say no to Wookie when I saw him for the first time, even though the first thing he did was hiss and try to escape. Probably also because he looks very similar to another cat I had some years ago

It could be the same cat reincarnated! They have 7 lives afterall!

Maybe the skill is just having the same nature as the wilder ones.

I am glad you brought that out 😄

Oh, it's always been there

Beautiful kitties!
Health to them!

Congratulations @nikv! You have completed the following achievement on the Hive blockchain and have been rewarded with new badge(s) :

Wookie is looking happy and healthy... A real cutie too.

He's lovely, this has been a really good outcome

Now I know how to take me wild cats! Thank you very much. These cats are very lucky!

A black cat with very expressive eyes. I'm glad they have passed their socialization moment. When an animal is mistreated, it has a hard time socializing relaxed. You had the patience to help Toofie overcome his fears.

About Peanut, he reminds me of Bonder, a Siamese who although not pure, was also very Siamese, hahaha. I miss him a lot, he hasn't been with me for 4 years.

I loved your photos and what you told us. Nice cats.