Cointelegraph Just Released a PR About POLYCUB | Next Generation of Yield Optimizers! 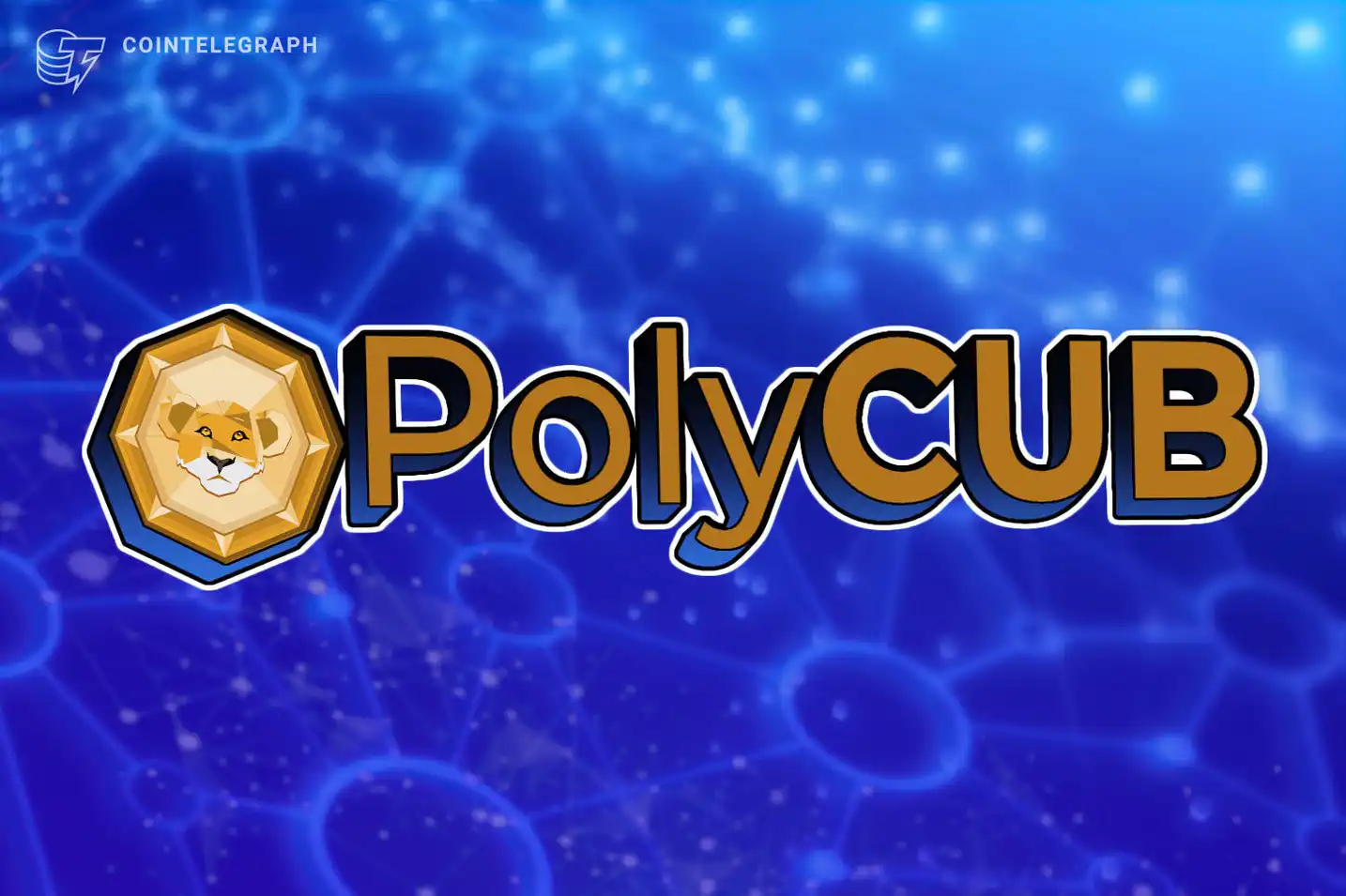 Cointelegraph is one of the largest crypto news outlets in the world. At the outset of PolyCUB, one of our primary directives was to connect and start establishing business relationships with all the major crypto news outlets, PR agencies and other organizations.

In the broader vision of LeoFinance and our Web3 ecosystem, this is vital to our future. The critical path forward is expanding the scope and scale of our community and we've done an incredible job of that so far with PolyCUB.

Traffic, users and signups are all up. Many of the KPIs we use to track the growth of LeoFinance as a whole are up as well.

Just last night, a LeoFinance.io article was also picked up and linked to by The Washington Post which gets 79M unique visitors every single month.

All of the PRs and articles about PolyCUB also included links to LeoFinance.io along with a description of what LeoFinance is and how we're building a massive Web3 Ecosystem from the ground up.

LeoFinance is growing exponentially when you look at the broader picture. Our entire mission is to expand the width and depth of our Web3 Community Ecosystem and that is happening on a pace that we have never seen before.

With an expanded team including our newest Head of Business Development and Head of Growth, we're seeing initiatives take place on more than 50 major crypto news outlets just like Cointelegraph along with our Tik Tok account growing at rapid speed. The reach of LeoFinance and our brand recognition continues to grow. 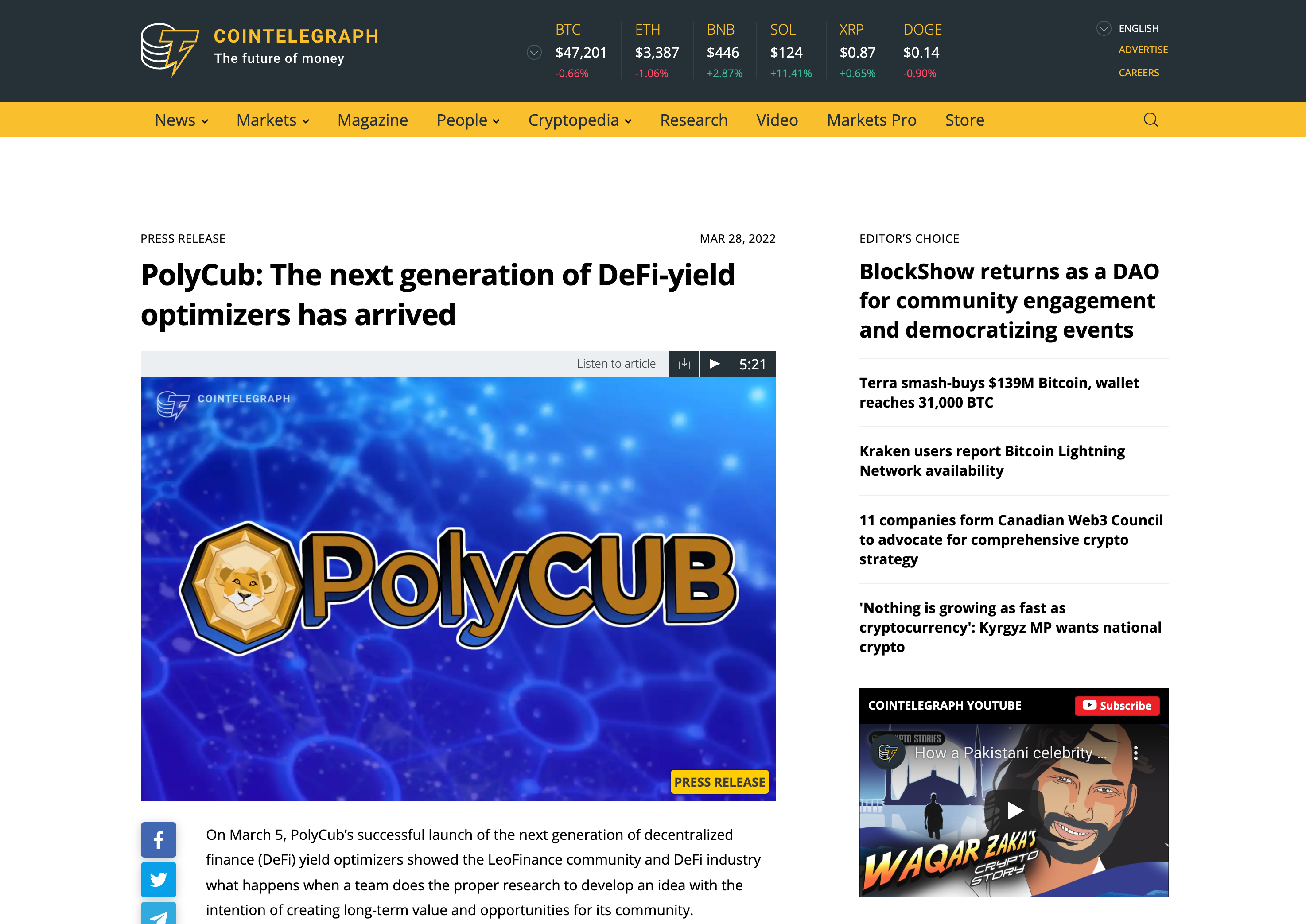 Cointelegraph's coverage of POLYCUB focused primarily on the future of what we're building.

If you believe in LeoTeam and LeoCommunity, then you'll believe in our ecosystem and our ability to evolve with the times and continue to innovate.

We're still in the early stages of the entire LeoFinance Project. There is so much to be built, so many users to onboard and so much growth to be had.

Our ask to you, the community, is to help amplify the coverage of all these PRs and articles that we have worked with our media partners to distribute.

It's vital that we build as much traction as possible and continue the growth rates that we've seen while expanding our reach simultaneously.

It impact is really massive in showcasing what going on in the Crypto world which I appreciate a lot that connect people together when following and every update on polyCUB is been passed across to get everyone informed.

This is absolutely true as it has been seen true the projects built after leofinance was launched. With the projects leofinance has been building and is going to build I’m sure it will always be a long term hit.

Looking at the recent launch which is POLYCUB I can understand that leofinance put in all efforts in make their project to be for a long term, with all the marketing they have been doing.

I’m sure leofinance will lead us into the future.

It's really great seeing articles on Polycub and other Leofinance projects on some of the biggest news outlets out there. While this is great PR for the current project by the team, it's long term effect is mindblowing and I just want to congratulate the Leofinance team for their hardwork. This isn't an easy task but you guys keep making waves. This is just the beginning. Great job guys.

Really a powerful start. Its time, all content creators on LeoFinance get schooled on SEO. I'll be glad to learn personally to pitch my contents to make it easily picked up in google search for related themes.

This is just the way to go. Each time I tell people who inquire about investing in Hive and it's product that they have to pick up a long term lens.

If you believe in LeoTeam and LeoCommunity, then you'll believe in our ecosystem and our ability to evolve with the times and continue to innovate.

I do appreciate all of the efforts you guys are putting to make polycub and leofinance great. Just keep focusing we are here with you for the long-term.

Great one with the second round of marketing. It's important the community get the attention and drive users into one of the best DeFi yield platform on the crypto space

Brand recognition is really sacrosanct. Nice the team is greatly on that with the recent marketing releases. In the near future, leofinance and all it's project should be sitting pretty high where it deserves

This very good one that 5he community bringing more users to be active and the polyCUB pass across the users for more information. Good job

Cointelegraph is one of the largest crypto news outlets in the world. At the outset of PolyCUB, one of our primary directives was to connect and start establishing business relationships with all the major crypto news outlets, PR agencies and other organizations.

This is great news and welcome development.it help POLYCUB to hold ground and expanding more.i use medium give Kudos teams for the great they have done so far.

Great marketing strategy about the project polycub by making it go viral in the all ecosystem,which will drive all investors into the DeFi yield platform on the crypto space

Great marketing strategy and with PolyCUB I feel like we entered a new era of PR for Leo Finance with the sole goal to put it on the front page. Sustained actions and endeavors are either taken by the team or the community as we all move as one. Expand and broadcast everywhere!

It's exciting that coin telegraph has shown polycub as the next generation of defi-yield optimizers had arrived. This is good marketing strategy. Which shows that polygon is a force to be reckoned with !

Great to see PR from cointelegraph, this is creating awareness about PolyCub though the project has its own unique feature that give it's user opportunity to earn passively, but it's cool to get the word out there for many to benefit from this is what is call crypto community engagement.

This is great, seeing the way PR is being utilized into making sure the word gets out there

Onboarding new Lions to the jungle is a must for our community since we are away from the intrinsic value of our projects. In terms of raising awareness on PolyCUB, CUB Finance and other Hive projects, LeoFinance plays a critical role by informing newbies. New Lions and new investment will help us reach real value of projects ✌🦁

I am really impressed by the amount of announcements and publications of the many crypto news outlets. Great work from the team and that will help PolyCUB in the long run👍👍

That Cointelegraph article is from 28th of March, and it was clearly declared as advertisment.
It is really concerning to me how the people in this bubble get euphoric, if just an ad is placed.

I see the vision and I key into it. It's only a matter of time before leofinance gains massive traction. I see Khal promoting leofinance on tiktok (I will urge other users to engage with his content there). Tiktok can push his content to A larger audience which is good for the community. I might start posting titkok videos on crypto myself.

Polycub is another project that can draw more people into the leofinance ecosystem, and the team has not relented in its PR initiatives.

Awesome seeing our polycub in one of the biggest crypto news outlets for the second time in a month. It gives great confidence in the project. I believe in time, all the hard work put over the years will eventually pay out. Leofinance and Polycub to the moon

Leo finance is really expanding and alot of token are being earn in leo finance community.

Opera Web Designer is already starting to roll out new apps. It has started to support eight new crypto wallets on the blockchain. When we examined the Ethereum network, the web browser launched as Beta in January; It looks like solana Polygon will start offering Support for ronin, celo, and Nervos.

Leo finance is growing Every day. Many people are joining the community and is creating jobs for people.

Im just really happy to see the news getting out there on hubs for crypto news. Even if it's press releases of basically our own making the long term branding effect is immense. I just really want talking about our chain normalized. Great stuff!

The ongoing strategy is good and effective but also a youtube promo would add a bit. How about approaching one, like Joe parys, or Scottcbussines (I think he is on hive too), etc.

great job, although we all need diamond hands currently with losing about 8% daily on our cub inc investments :O

It's really great to see PolyCub getting featured on Cointelegraph content publication as this will also help to bring more exposure to PolyCub project.

LeoFinance is growing exponentially when you look at the broader picture. Our entire mission is to expand the width and depth of our Web3 Community Ecosystem and that is happening on a pace that we have never seen before.

The fact that @leofinance adopted Defi 2.0 on PolyCub via Protocol Owned Liquidity (PoL) is one of the best use case/token utility I'm really so happy about and now the team also has plans of adopting and expanding a Web 3.0 system which makes it more interesting.

This is why I came up with my review and suggestions about POLYCUB and I definitely hope you may go through this publication whenever you are less busy even though the content seems to be old.

This is really nice.
Although I don't know much about the crypto world but I know the world is moving in that direction.
Cointelegraph will really create a lot of awareness in time to come.
It has already started that.
It also seems tha Polycub will be as robust or even more as the other coins.