Bitcoin.com Interviews Khal About Hive, PolyCUB and LeoFinance's Web3 Vision of the Future! 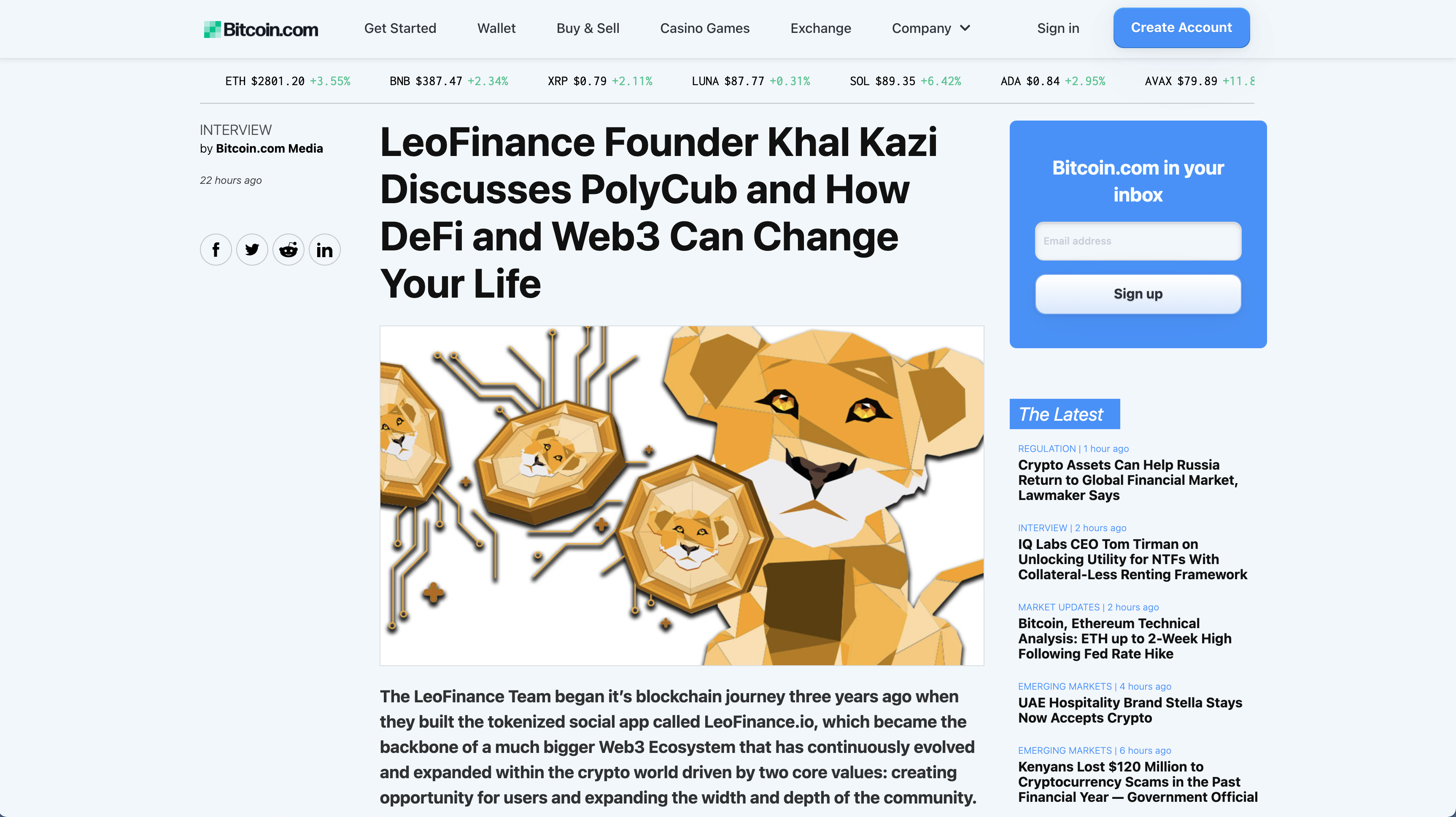 "The LeoFinance Team began it’s blockchain journey three years ago when they built the tokenized social app called LeoFinance.io, which became the backbone of a much bigger Web3 Ecosystem that has continuously evolved and expanded within the crypto world driven by two core values: creating opportunity for users and expanding the width and depth of the community."

Bitcoin.com on LeoFinance and our Web3 Ecosystem

As we've been talking about since the launch of POLYCUB less than 2 weeks ago, this is the major marketing cycle that we've been building up to.

PolyCUB is growing in a massive way. We're getting attention on the LeoFinance project at levels that we've never seen before.

We are doing some major things in the mainstream landscape of crypto. Right now, we're pushing PolyCUB and expanding awareness about one of the most opportunity-laden DeFi platforms in the Polygon ecosystem right now but in the longer-term we're doing something even more powerful for our community: building backlinks, authority and brand recognition for LeoFinance.

One of the driving goals for us with PolyCUB - and all of the apps we build, for that matter - is to build width and depth for our community.

To bring a wider and wider range of community members to this Web3 Ecosystem that we're actively building. That is our mission.

Cointelegraph wrote an awesome piece about PolyCUB yesterday. They've got a full-length PR that will follow that publication up later this week.

Bitcoin.com wanted to do a podcast with us, they also shared our interview on all their major social channels which has led to a big boom in engagement for the entire LeoFinance Web3 ecosystem - especially PolyCUB. 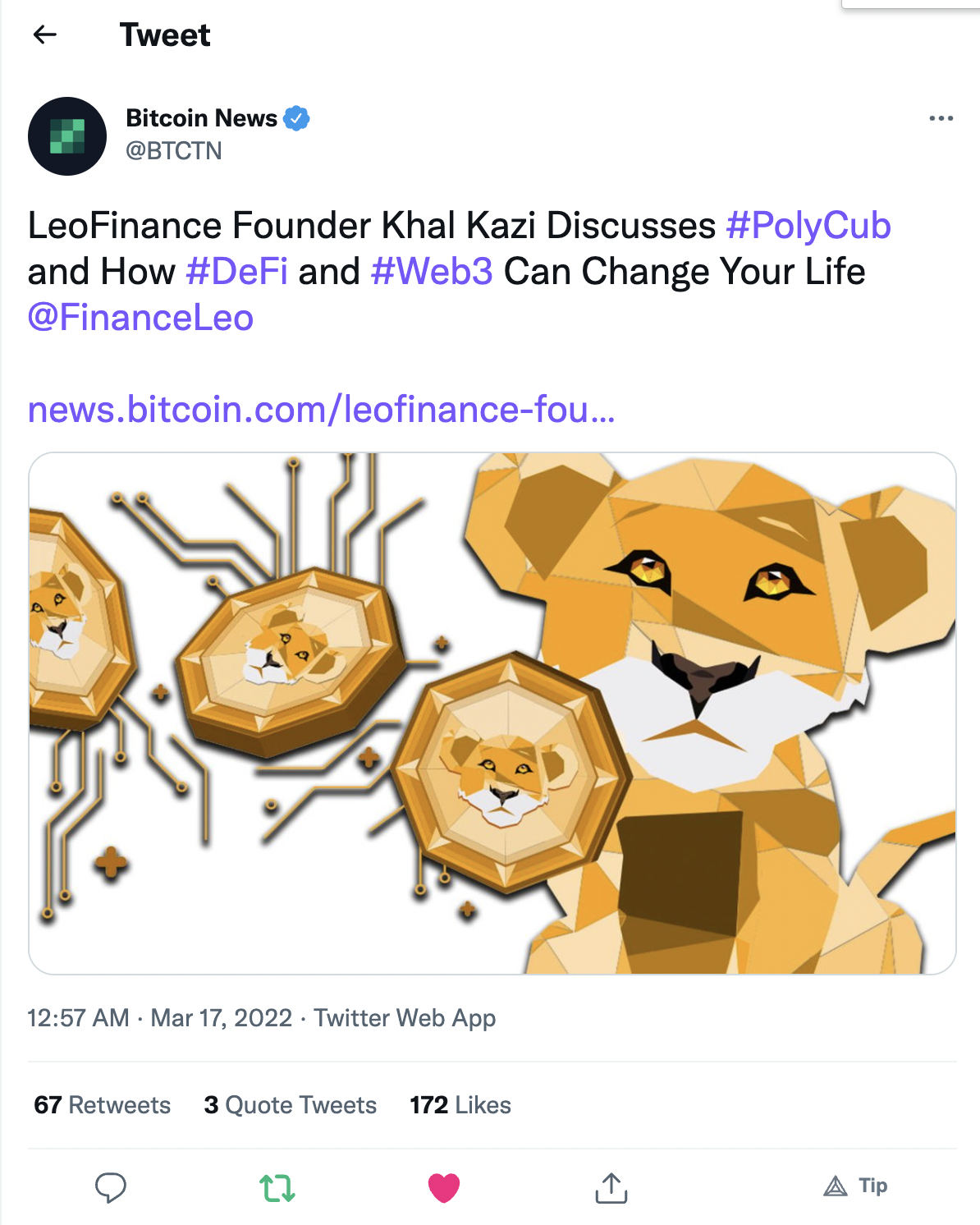 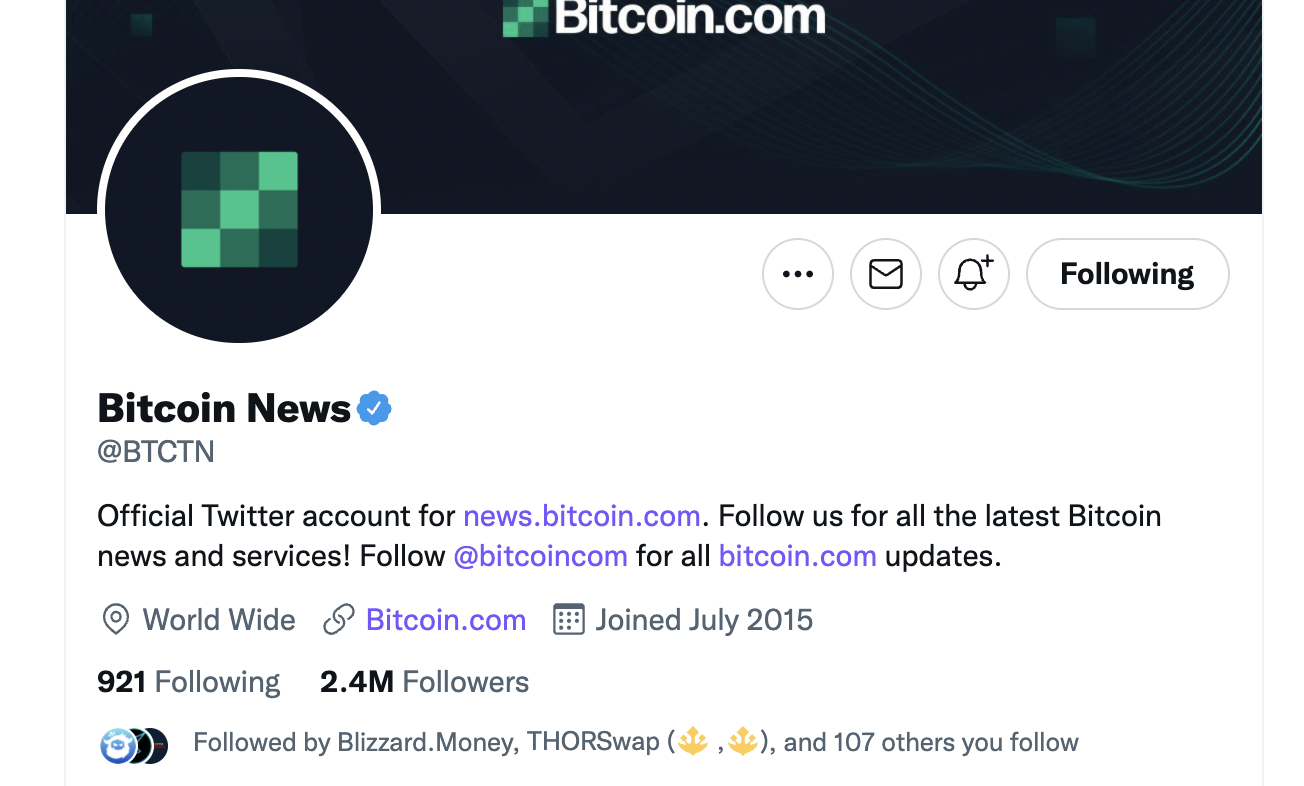 Be the Slingshot Thing

Do the slingshot thing that we talked about in the last AMA. Our whole community has already done an incredible job of amplifying the reach of our press release tour for PolyCUB and we need to keep this momentum going. It's extremely valuable for our ecosystem if you go out and:

It's one thing to throw a pebble as far as you can in the ocean. If you have a slingshot, you can send it much further. Be the slingshot and amplify the reach of our marketing efforts for PolyCUB and the entire LeoFinance Web3 Ecosystem!

Here are all of the links to the Bitcoin.com podcast, articles, tweets, etc.

PolyCUB is growing in a massive way. We're getting attention on the LeoFinance project at levels that we've never seen before.

That is one thing that makes the project so interesting,the level of attention and growth on daily basis is something that has gone beyond expectation.

It is really massive as been said because everyone is excited that polyCUB is moving in a positive state which every individual in the blockchain is benefitting from and leofinance are really helping in making sure that goal is a success. Kudos to the team

Seeing polycub and the leofinance ecosystem on various media outlets in the past few days has been awesome. This is good marketing in full force. Feel good to here at such a time. Very bright ahead

The introduction of the leofinance community as successfully been justified and honestly the level of update that has come from the community of recent is nothing but the best so far.

The polycub airdrop too has sincerely proven to be an outstanding one , right from it snapshot to lunching of the token and also adequate measure put in place to ensure it is well claim by CUB Holder's.

Indeed it is a massive project

It felt so good yesterday to see PolyCUB and Leofinance everywhere, nice job guys, I'm so proud to be part of the leofinance community and also polycub price has gone up too.

With 2.4M followers of Bitcoin.com on twitter, I'm hoping much interest can be taken in PolyCub by people who are really excited about the prospects of DEFI. Hopefully we can do our parts by maintaining this momentum.

I’m happy for Leofinance, their projects are going so well. After the Launch of PolyCUB I can boldly say that the team is very hardworking.

Great work team. I am constantly on twitter waiting for your update. Will continue to support the project. Polycub to the moon!

Massive marketing from you guys in the past few days. Exciting times seeing our beloved platform in top media outlets. Doing my part in liking and retweeting those links. Everyone out deserves to know about us.

It is massive and great seeing Polycub going viral in the ecosystem and blockchain through the media of marketing about the project and create awareness to investors and also beneficial to the community. Kudos to the teams for the great job and also to the users for sharing and posting about the project to other platforms....

It really been great that everyone are enjoying that polyCUB is moving massively in the Blockchain and the Leofinance teams are really helping to achieve our goals . Thanks to the whole teams

Awesome! One more feather in the cap. 🔥 Massive marketing efforts guys. This one's a biggie.

Incredible to see LeoFinance and PolyCUB getting marketed to hundreds of thousands of people.

Nice to see these blogs publishing post about polycub. This will further strengthen the trust new investors will have on polycub when they are doing their research.

This podcast got me writing again yesterday lol. Very awesome and EDUCATIVE. I love the fact that it extends to web3 as a whole. I learnt alot listening yesterday.

The community we have is the real gold. Let's go, lions!

Really great work being done this week. Interview on Bitcoin.com after CoinTelegraph this is really cool. PolyCUB is making great strides towards branding. Soon PolyCUB will be everywhere. You are doing really great work, thank you.

This is really great!! And yes keeking that momentum going is extremely imprtant right now. All this press must be why the price of polycub passd the $1 mark!!!

The marketing begins :) people underestimate the power of the hive blockchain, really looking forward to more being built and the network being pushed to show its capabilities in the coming years

I just finished listening to the podcast on Bitcoin News. I think it was awesome. Great job Khal!

is everything need to say.

Marketing at another level, a plan well executed and a strategy like never before. This opens the road to put into practice such strategies also for future project launches, so there is knowledge to be harvested from such experiences.

Super awesome seeing this in action. These articles not only help spread awareness but authority. TVL has also been slowly increasing which is a good sign as well. I do hope there's some way you're catching leads from all of this though for future projects.

This is awesome. Now polycub is being mentioned in coin telegraph. If you can get even 0.1% of readers participate in Leo finance and buying into polycub. That is potentially 30,000 more people joining this platform. It's becoming massive, ratio was 15 just yesterday, the team sure is working hard to make this a success !

The core team is playing their part and the believers need it to.

Thanks, gladly promoted to my social media's from my end 🙏.

It gladdens my heart with the attention that PolyCub is bring to the Leofinance community! I am jumping in listening to it RN.

LEO team has done so well. I feel blessed to be a part of you guys. I've aped into xPOLYCUB hard with diamond hands. Am I selling.... hell no!!!