How Much Traffic Are YOU Driving to LeoFinance? | Profile & Post Analytics

Driving traffic to LeoFinance is key to the overall growth and success of the platform. 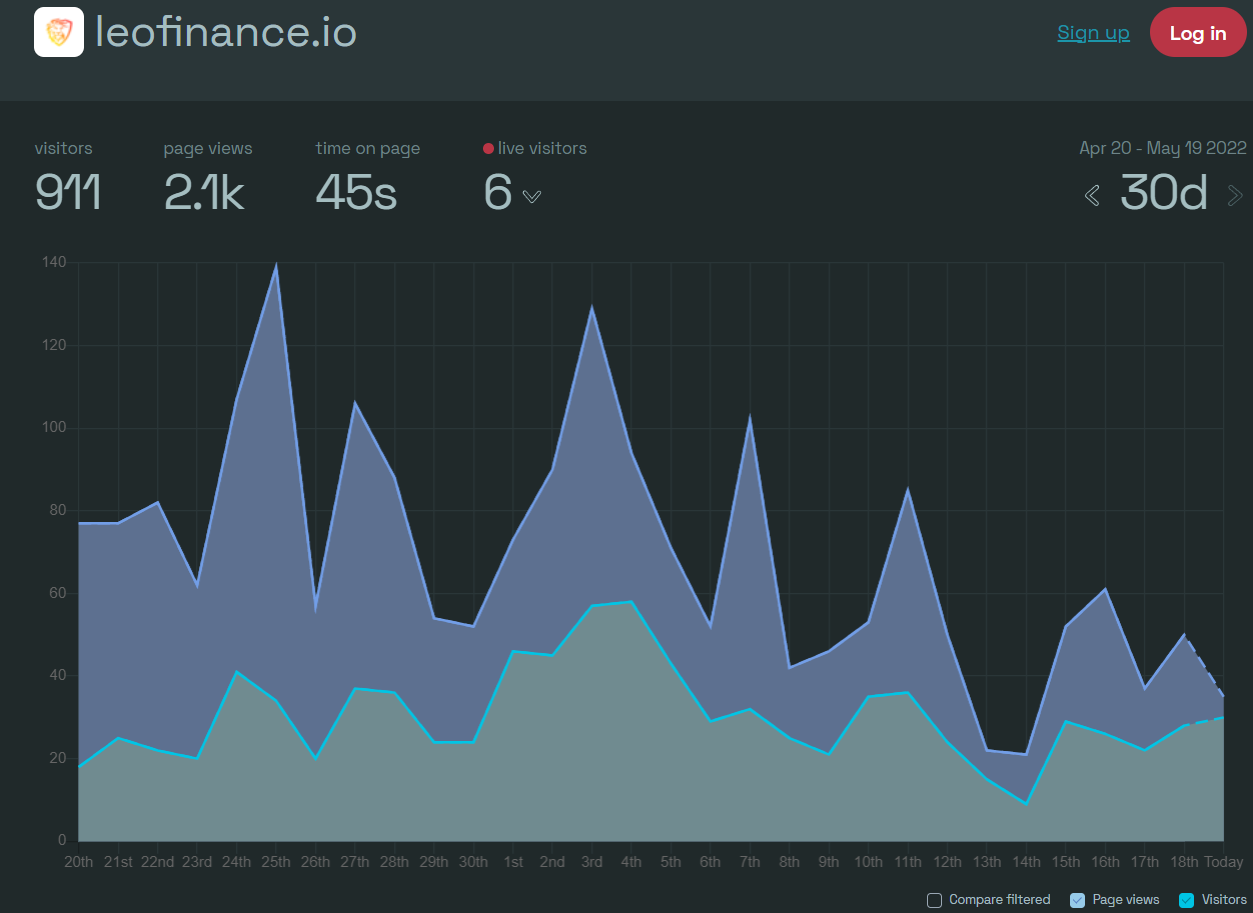 Ever wondered how much traffic you're driving to LeoFinance?

As a LeoFinance ambassador, I've shifted a lot of my focus to finding ways to increase the traffic I drive to the platform. @forexbrokr commented on one of my posts the other day and mentioned that I was "killing it on Google" and provided me a link to SimpleAnalytics. When I first looked at it I didn't really comprehend what I was looking at, probably because it was extremely late and I just glanced at it.

That tab has been open in my browser for a few days now and last night I decided to really dive into it. After doing some digging, I found out that I have steadily increased the amount of visitors to my content even though now I'm creating less content on a daily basis. I've done this based on a lot of tips from @hitmeasap and this post about how to make your post pop on search engines.

I never really realized how important keywords, formatting, and even the "alt text" of the images in your posts were. I mean, I've always heard people talk about search engine optimization but was never shown the results so I guess it didn't click with me.

In the past 30 days, my profile and posts have gotten 2.1K views, and 911 unique visitors. While these numbers may sound small, they're actually pretty good. Those 911 unique viewers spent an average of about 45 seconds on whatever page they viewed. Considering how short most people's attention spans are, I'd say that's at least decent.

As you can see, my post Insane Web of NFT Scammers has brought in the most traffic in 30 days at 105 referrals. The second highest traffic post in the past 30 days is Engine Wallet - How to Get Multiple Free NFTs at 96 referrals. My audience is primarily in the US, with Nigeria being the second highest. I assume this is largely in part to the times that I make my posts, since time zones make a big difference on when someone will see a post.

The other important breakdown is to the left, that shows where the traffic is coming from. Obviouslty, the highest number here is going to be "direct" because these are people that are going straight to LeoFinance on a daily basis (at least, I think that's what it means lol). Right below that you can see I got 438 referrals from Google and 92 from Twitter!

Comparing these numbers to my numbers from January, you can see the massive growth. 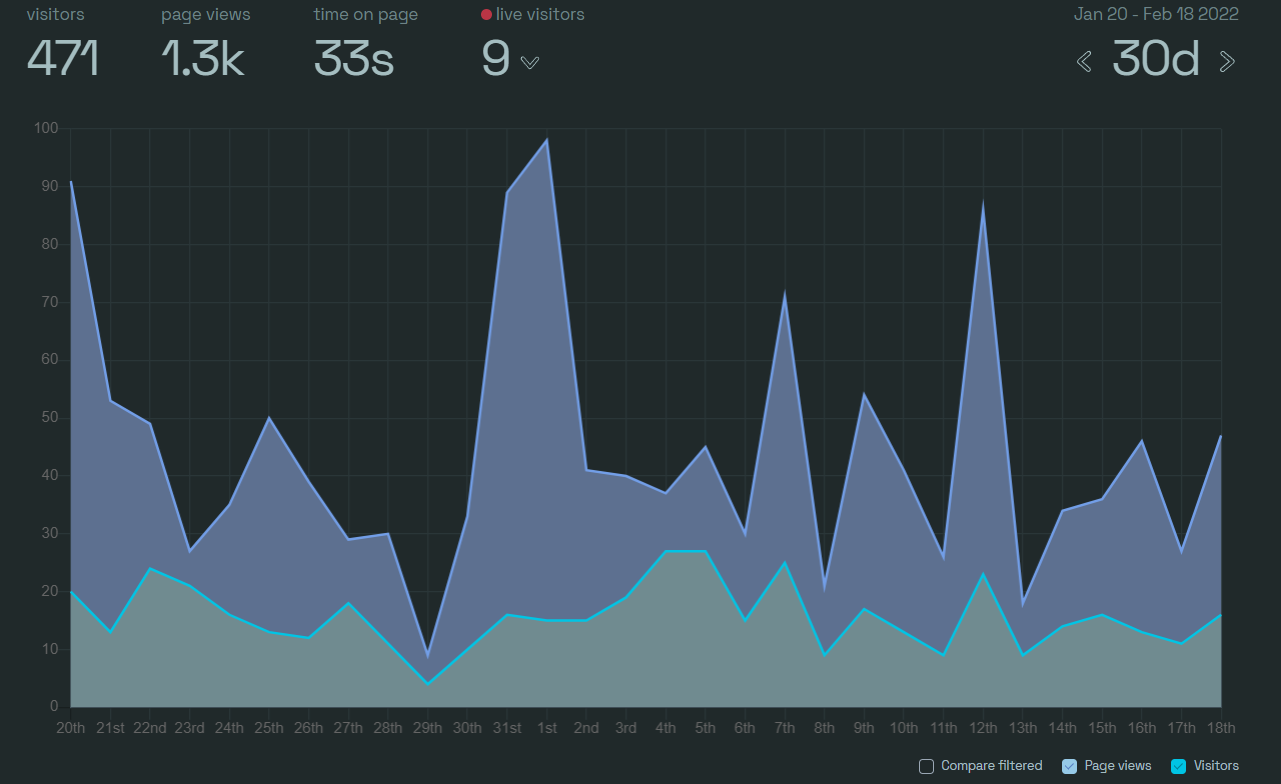 I've nearly doubled the amount of visitors and page views in just a few months. This is what focus can do for your content. Keep in mind too - the more traffic you're driving in, the more advertising revenue you're going to get a cut of based on your amount of LEO staked as LEO Power. So while you're optimizing your content, it's not a bad idea to grab some LEO tokens whenever you can to maximize your APR on LEO.

Again - I know these numbers sound small but I think they're pretty damn good. Let's look at LeoFinance as a whole now. 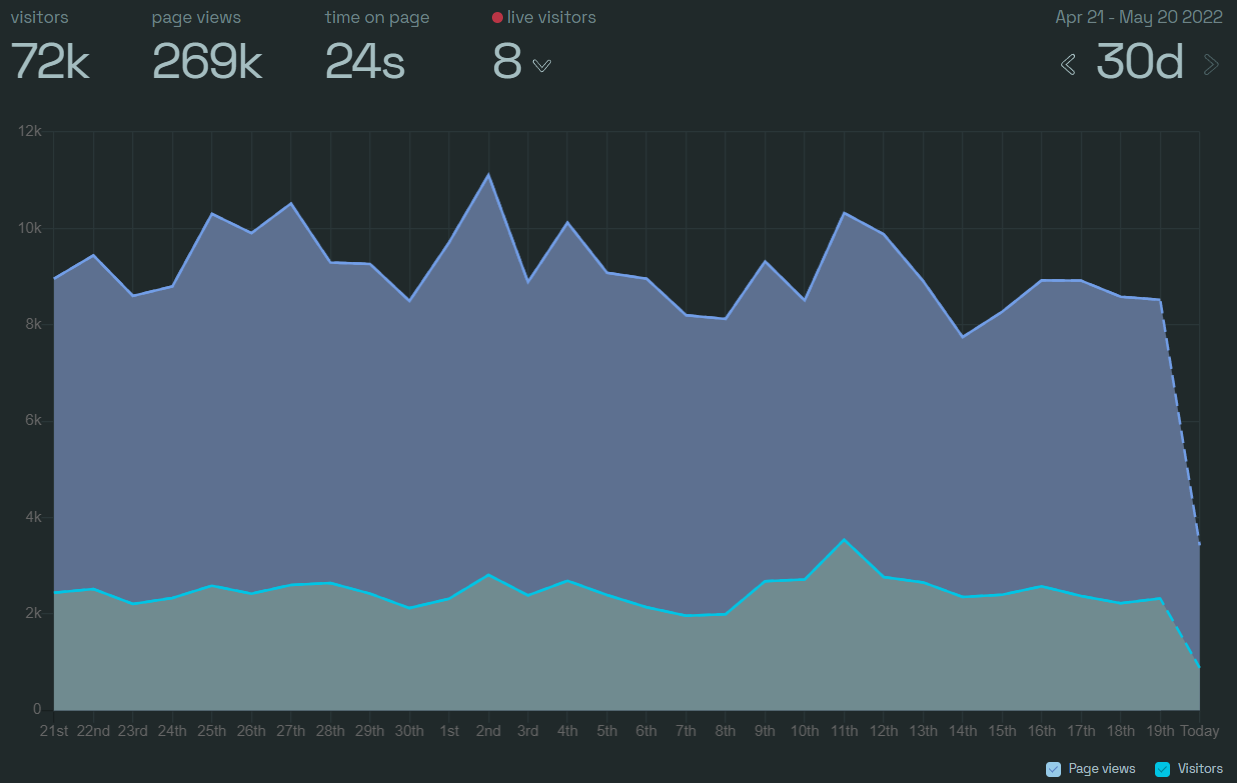 LeoFinance got 72k unique visitors and 269k page views. The US and Nigeria are at the top once again on the geographical analytics. 23k referrals from Google, 5k from ListNerds, and 4.1k from Twitter. I don't know that I would consider ListNerds traffic very important because it's primarily people already using Hive. However, that does not mean that all of those users use LeoFinance so you can't overlook it.

23k from Google is pretty solid. We definitely need to pump up those numbers though! There's a lot of very simple ways to increase your content's search engine rankings. We also need to keep the emphasis on sharing our content on Twitter. If it's written on LeoFinance, tag them on Twitter. If you're writing about a particular project, tag them in the Tweet. These are just a couple ways to keep that traffic coming in.

I highly recommend checking out the posts linked above for even more juicy tips. If you're curious about your numbers now, I suggest you check them out. You can use this as a tool to see how your different efforts are affecting your numbers on a daily, weekly, or monthly basis.

For example - mine is visibile here: https://simpleanalytics.com/leofinance.io?search=paths%3Al337m45732

Not bad at all.
Even a small step taken in a right direction matters.
Again.. Good one..

A lot of small steps are required.

We need a large number of people looking to optimize their posts.

This is the key. A small effort from a lot of people is just as good.

Agreed. If we have even a few dozen people optimizing their content, we would see a major difference in 6 months. It is a slow process but a few more seem to be doing it.

I am going to give extra upvote emphasis to those posts that are focusing upon optimization.

I think it'll kick into overdrive when the Leo Ads mechanic kicks in.

Yep... If we kept on reminding them about this, I hope one day we may see a good number of people optimizing their content.

I will be happy if we get a few dozen doing it. That would make a huge difference at this point in our evolution.

We are starting to get some high quality, highly optimized articles appearing.

Here is an article with some good suggestions about how to drive more traffic to Leofinance.io.

Yeah, it's definitely showing in the numbers. @hitmeasap has some incredible articles about SEO.

One of the Leofinance leaders in this area.

Hopefully more people start to tap in. As long as we are doing it, that is all we truly control.

That said, it never hurts to encourage others.

I'm trying to "think outside the box" and my latest attempt is the challenge I have. I think it can work wonders in terms of rankings for certain articles, but I also feel that it's a superb way to get people to dip their toes in SEO.

Thanks, I appreciate it and I'm doing the best I can to share something of value. :)

Though I am still confused about how to interpret the numbers, I find the tool very interesting.

I recommend doing some reading on the posts I linked to get a better idea.

There are so many traffic channels out there and I think Leo Finance tapped into the most important ones. I expect the traffic driven from TikTok to increase as that's a pretty addictive platform.

Yeah tiktok is going to be a big one, the numbers will be showing it soon.

Well you're already killing it the first day I came in contact with your post, it was well formatted and having that link bounce around, creates more opportunities for other posts to be visited. Well-done

I'm trying, getting better by the day.

Congratulations @l337m45732! You have completed the following achievement on the Hive blockchain and have been rewarded with new badge(s):

Very interesting, I will keep an eye on mine for a few months and see what I can do to change some traffic.
Funny to see my notifications in the last graph.

Yeah, at first I was a little confused about the notification page but then I remembered I go there a lot lol

Aha, ok 😁
When I just opened the page with leofinance but no user. I got the same…

The amount of traffic you can generate via search engines is unlimited. :') We all should do these tiny little things to make our articles SEO friendly.

You are the new SEO king on LeoFinance.

SEO GOD is a more apt title for him. 🙈

Not many peeps are doing that here. Last time I checked it was only you.

Wow, I appreciate that, but it's not true. I'm just pointing people in the right direction, trying to shed some light upon certain things.

You and many others are the people who implement some of these things in your creations.. So you are the real kings.

Not all too bad I don't think. Still lots of room for growth but I think it's a pretty decent number? 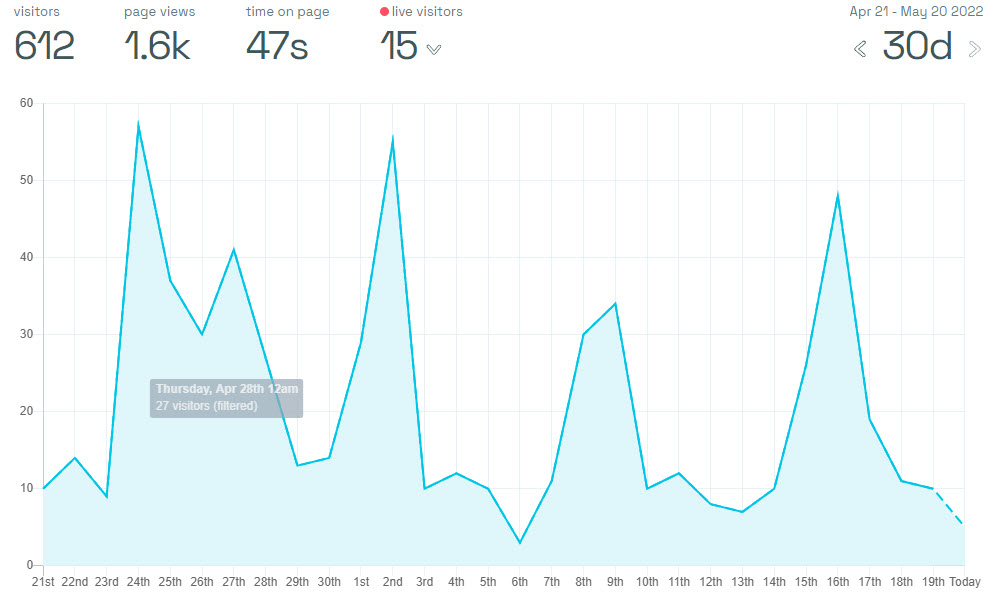 Not bad at all! It takes a long time to grow the numbers on this stuff.

It's better than I expected.

This is wild, I didn’t know we had access to analytics likes this. Thanks for sharing this 🙏🏾

How are your numbers?

My username is spelled wrong in that section. :)

In the past 30 days, my profile and posts have gotten 2.1K views, and 911 unique visitors.

That is really great numbers but even more important is the page views from the different search engines. Such as Google, duckduckgo and bing. Those page views are directly related to organic traffic while other sources is- and can be page views that comes due to direct marketing/advertising and tweeting links etc.

I love how you've used simpleanalytics to break down your numbers and share in-depth details though. Really cool!

Oops! Correcting it now. Yeah, I was surprised at the numbers from different search engines.

Yeah it's important to focus on optimization.

Thank you for sharing. ✊

I'm not sure what works but I'm figuring it out.

What an awesome tool, I am very curious how much traffic I am generating. Probably not much, as I don't share on Twitter. Great job man, you're a real ambassador for the platform!

Wow! Congratulations! This is something new learned today. Will definitely look into that and see how to double the effort where possible.

Lemme know what your numbers look like! Maybe we could put together a community contest or something to drive this.

I guess I need to start redirecting people to leofinance https next time. Thanks for the analytic tip btw.

You are beating me by 100 visitors. I actually thought it would be worse. Not complaining.

Not bad at all! How you been bro?

Mighty fine. Spending a lot of time outdoors and waiting for the markets to figure out where they want to go. Meanwhile, I'm sticking to enjoying life and it feels pretty good right now ngl.

Great work. I will start to monitor mine more now.