Happy Friday to you. I hope it's going well for you today. The weather is nice. Not too hot, not too cold. You know what else is nice? You. You're great and you can do anything you set your mind to. Did you remember to hydrate? If not, go drink some water and come back. Ok cool, so now we're all hydrated and ready to take in some information. So I wrote yesterday about a new blockchain that I really hadn't heard of called Huobi ECO Chain. Very fast and cheap transactions. Check out my post here where I show you how to get started using HECO Chain and some of the benefits of it. With that being said, I'm a sucker for new shit. I went in and decided I was going to play around with it and get a first hand experience so you don't have to wonder. So, I was led to ButterSwap by CryptoBlades since they just integrated HECO Chain. I'll do a post on that later. 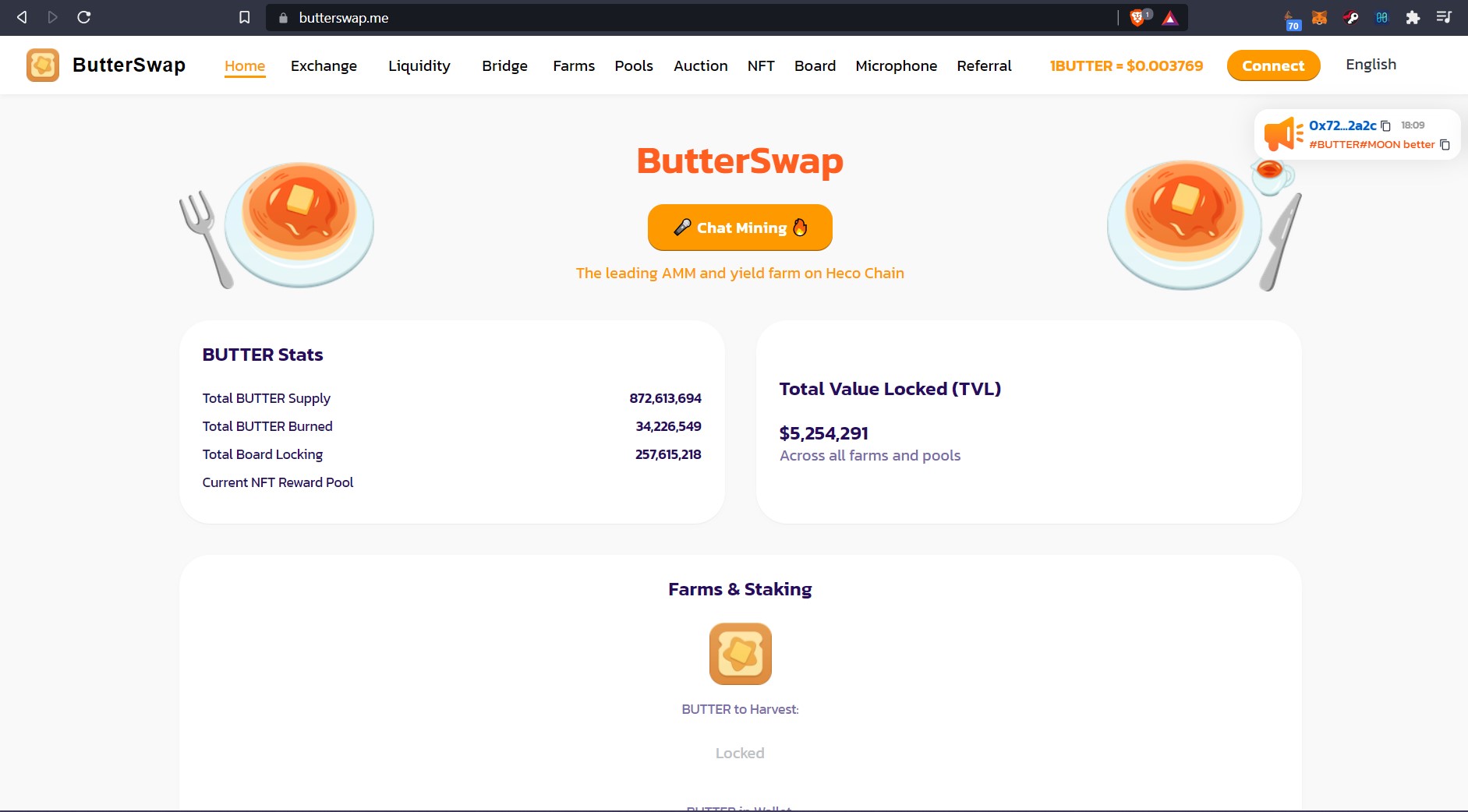 ButterSwap is a decentralized exchange/automated market maker built specifically for HECO chain. It offers a wide variety of features which I'll show you here and of course has its own token called BUTTER. The first thing I noticed when I hopped over to the website is the Bridge tab. ButterSwap has a built in cross chain bridge that supports Binance Smart Chain, Polygon, Ethereum, and whatever the hell OEC is.

So the bridge feature is pretty fucking awesome if you ask me. It is powered by iSwap, which is a 3rd party that completes the actual swap done on ButterSwap Bridge. I had to try it out. It's so easy to use, and you can swap from X Token on BSC to Y Token on HECO instead of bridging over the same token. While it is not the fastest, it is very new and I am sure it will improve over time. I hit a little bit of a snag on my first Bridge swap but the support in Telegram was quick. Here's my experience.

Pretty straightforward. Pick the token and chain you want to swap from. Then click approve, and swap. 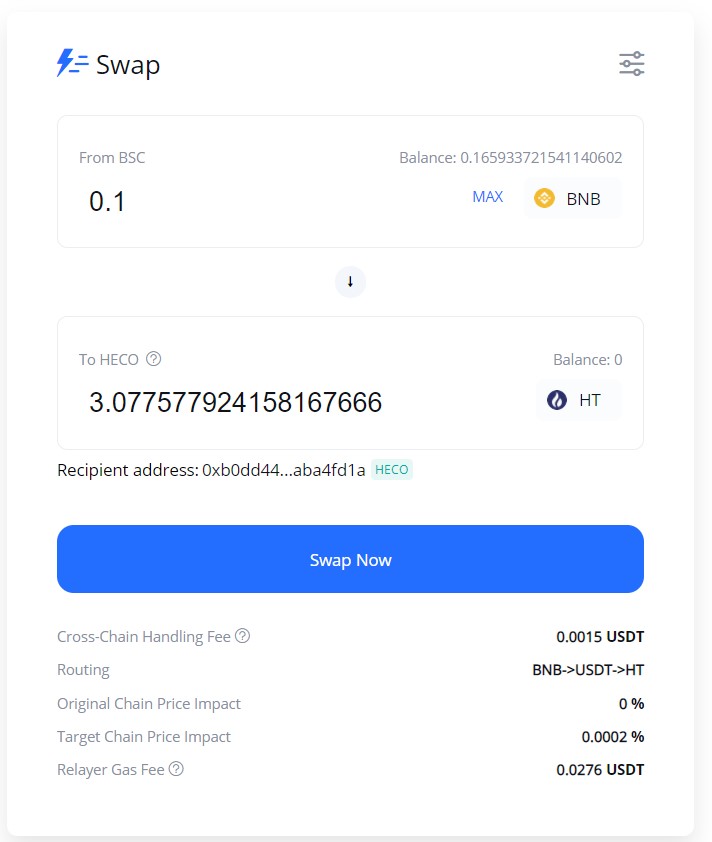 I feel like a kid in a candy store when I try new shit with crypto so this was very exciting for me. New blockchain and new DEX. "Trade successfully" appeared very fast, then the HT got stuck "in the confirmation". No big deal though, I'm very patient. So after waiting about an hour I hopped over to the iSwap telegram and dropped a message. I was responded to almost immediately letting me know that there was a bug and that instead of HT, I would receive USDT. A few minutes later, the USDT showed up in my HECO wallet. So just like that, I swapped BNB on BSC to USDT on HECO. Fucking neat. 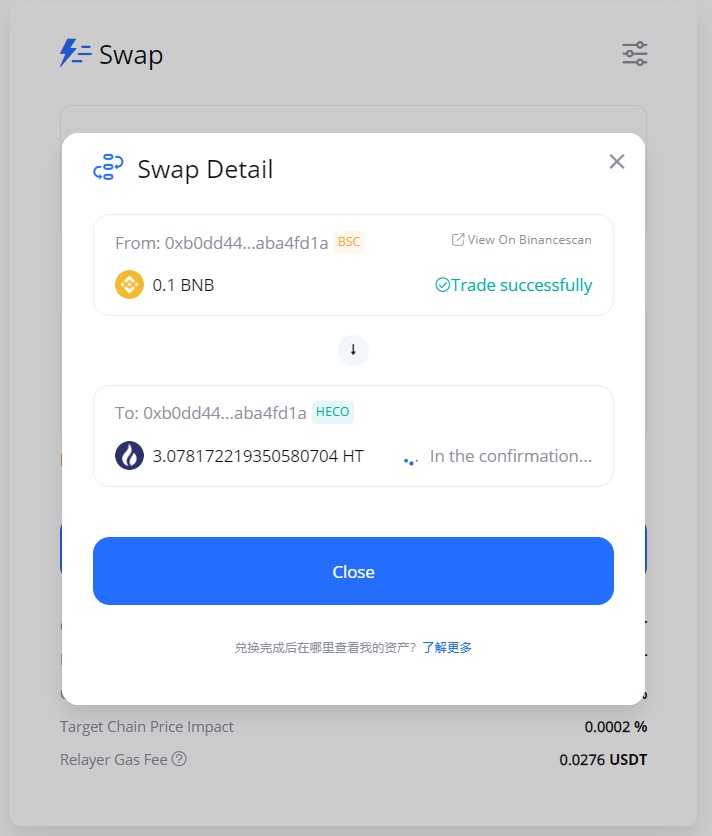 Cool, so let's check out the Swap feature since I initially was trying to get HT and not USDT. Luckily I ended up getting more HT by the time I was able to swap because the price of HT had gone down and my USDT was just sitting there. Similar to other swap providers, you set your tokens and approve then click swap. Check out that gas fee though!! This is really why I wanted to share. Less than a penny for each transaction. Try doing any kind of DeFi transactions on Ethereum and you'll lose all your money on gas alone. The swap happened very fast, within a few seconds. Now I had HT and was good to go. 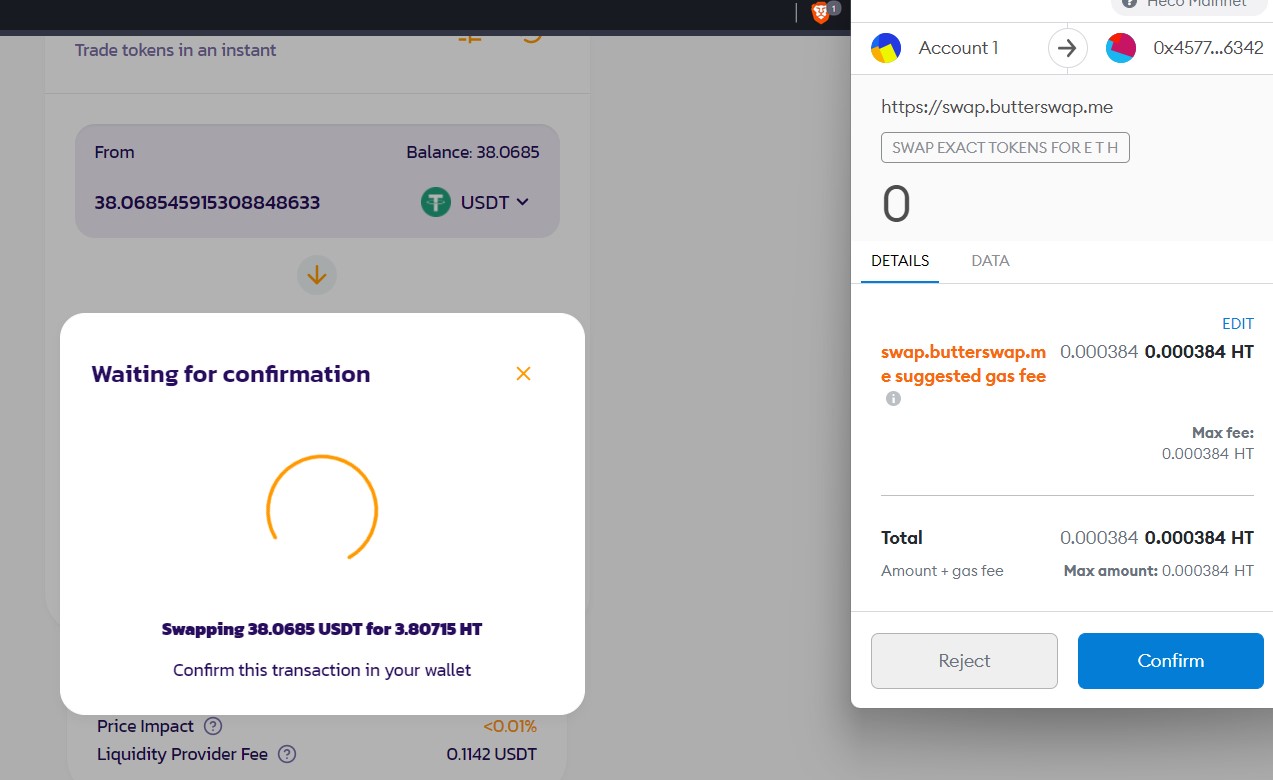 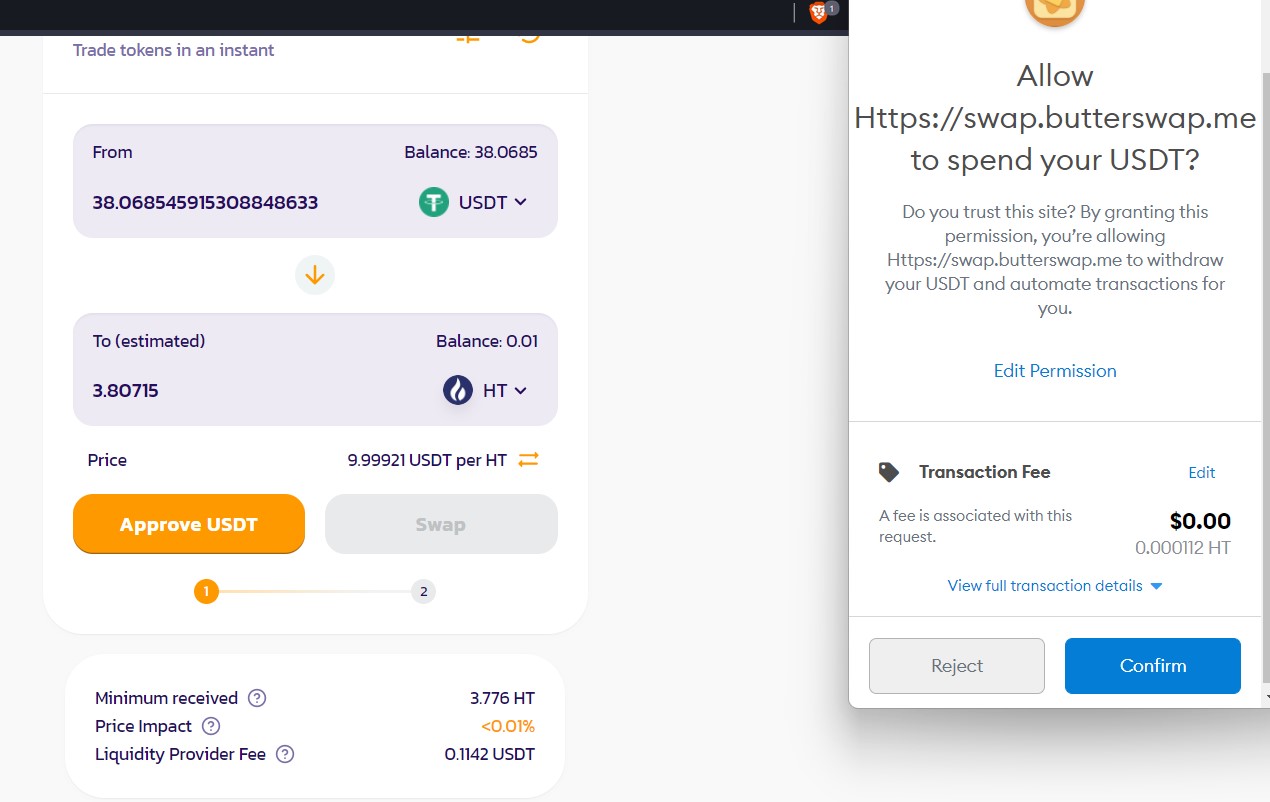 Of course, you know me... I get all giddy when I find a new place to yield farm. Boy, these farms look nice and tasty. Look at those fucking APY percentages. 549% is insane. Granted I don't know what DUSD or DMT are, but looking down the list, there's some really high ones that I am familiar with. As with all yield farming, proceed with caution you fucking degenerate. You don't wanna get killed by impermanent loss so please do some research and don't just ape into these random farms. 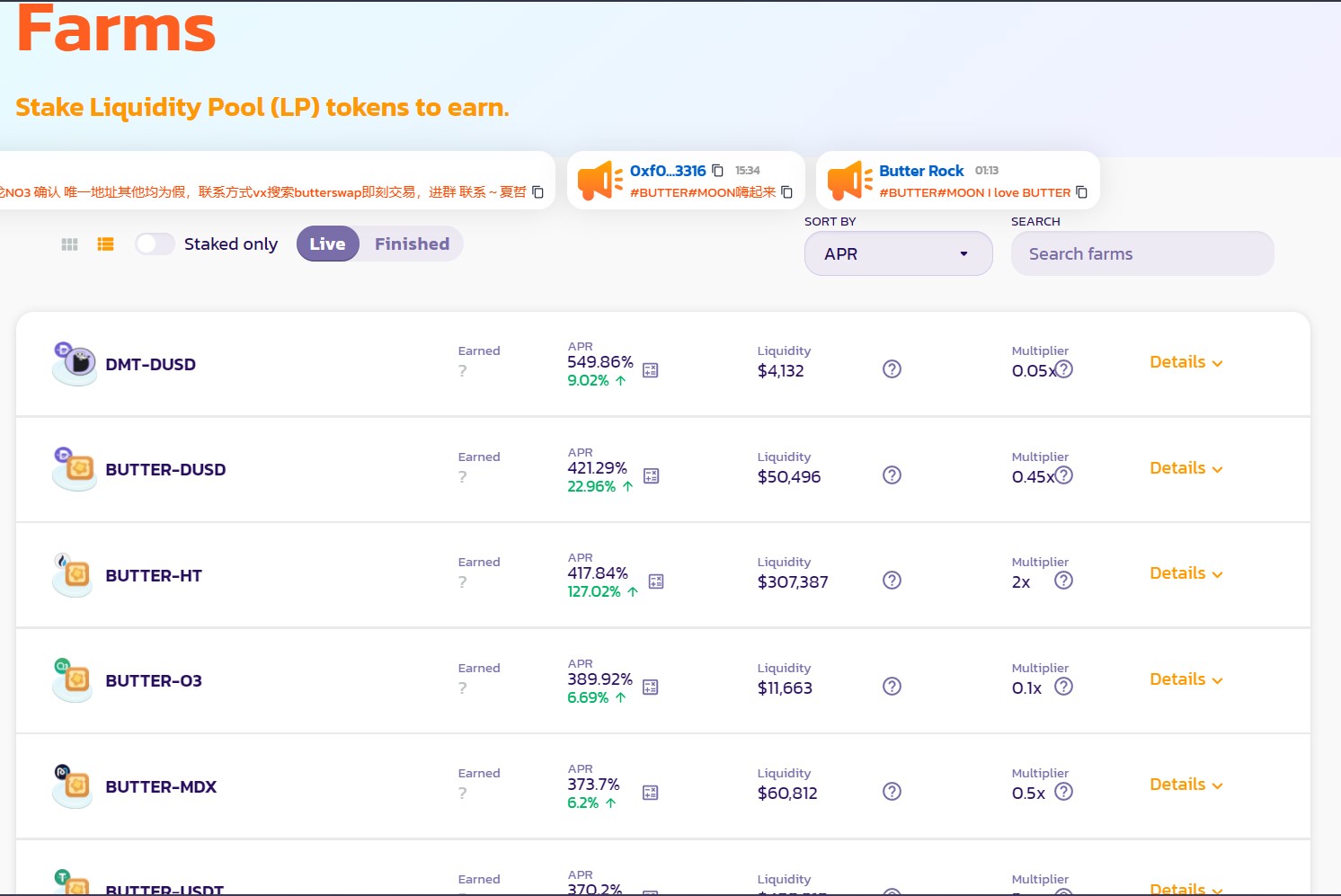 The Pools tab has solo staking pools for you degens that don't want to worry about impermanent loss on yield farming. I actually ended up staking some BUTTER in the Auto BUTTER pool so I can just set it and forget it. With the BUTTER price around $0.003783 and 244% APR, it was a no brainer for me. I threw a few dollars in there to see what happens. Very easy to do, just approve whichever pool you wanna stake in and then set the amount. Notice there's a SKILL LP pool for anyone who has some SKILL from CryptoBlades. 967% APR???? What the actual fuck. So if you're doing some farming you might as well do SKILL-BUTTER and stake it in this ridiculous farm. 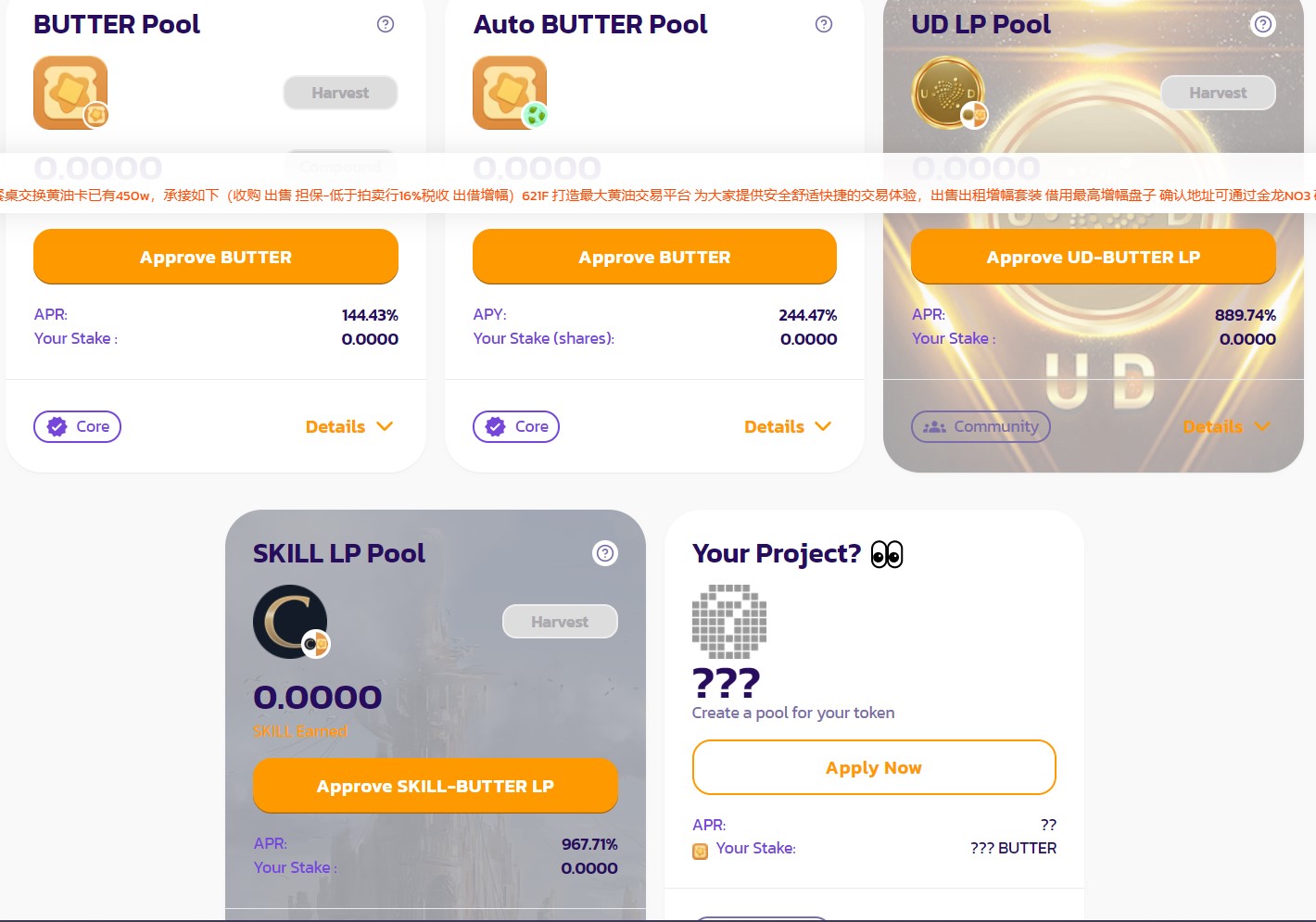 I fucking love NFT's. I have a good sized collection that continues to grow every day. So when I saw the NFT and Auction tab, I had to see what was up. So ButterSwap has their own NFT's which are able to be staked for BUTTER rewards. How cool! Naturally, I grabbed a couple of the NFT boxes. They each contain 1 random NFT that can be staked. Here's what that looks like. I ended up buying 2 of them and got the same Macaron NFT out of each one. There's 5 levels of rarity each with a different staking power. 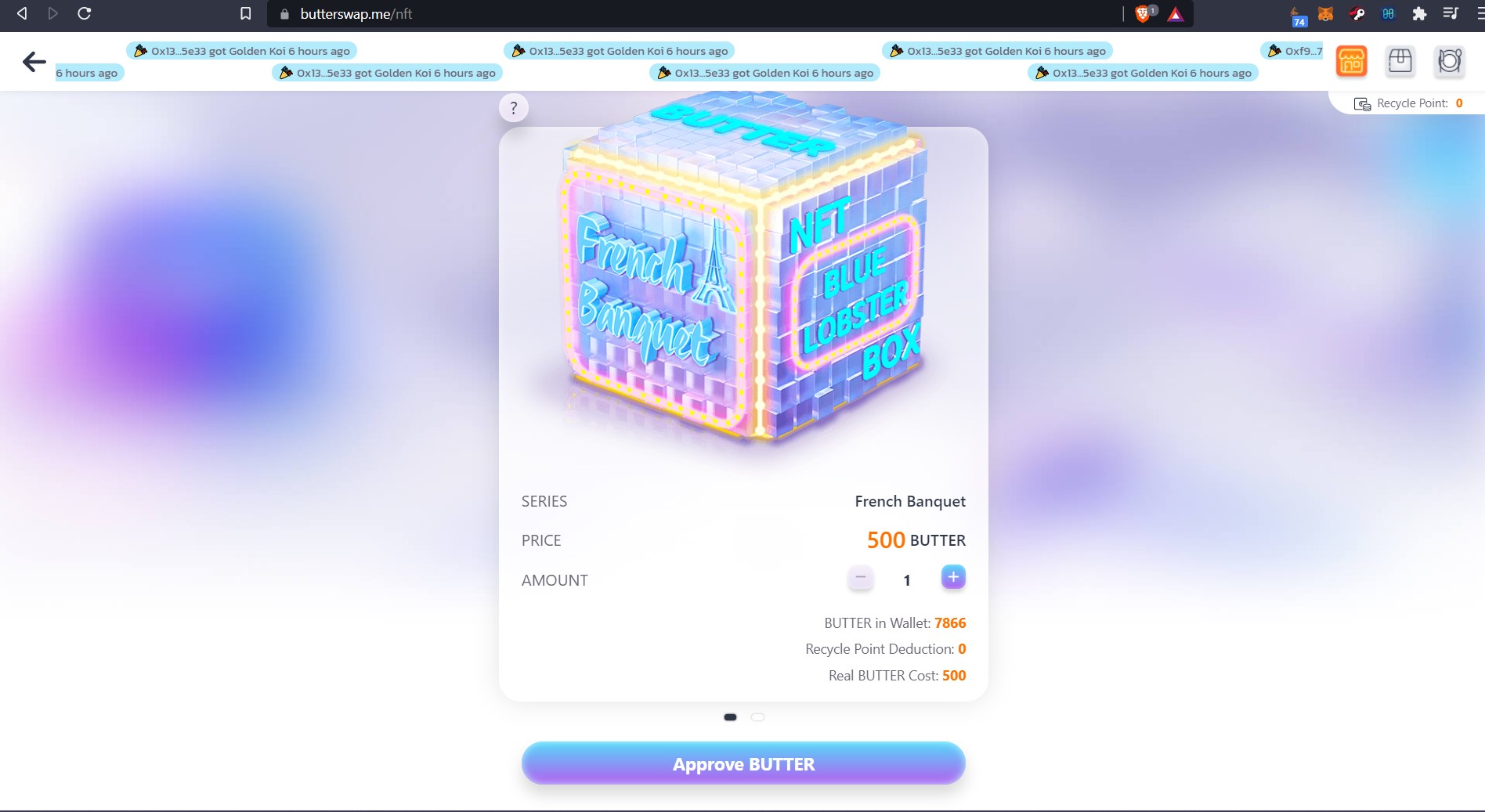 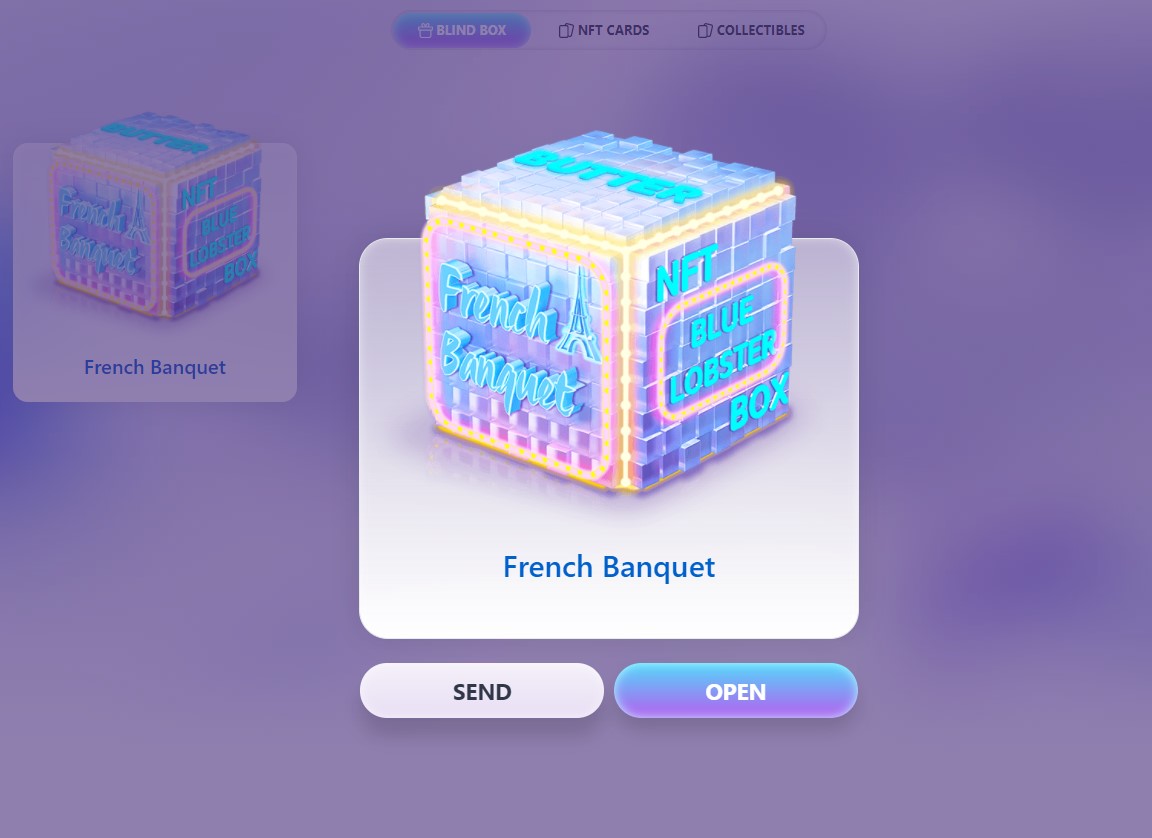 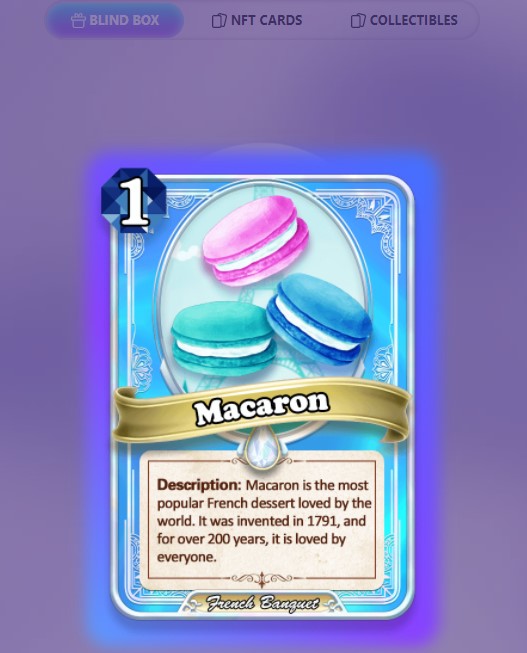 So now I have these 2 random food NFT cards... I had to go ahead and stake them because why the hell not? I already have them. In order to stake your NFT's you have to unlock slots called Plates, which costs 100 BUTTER and that plate can be used forever. 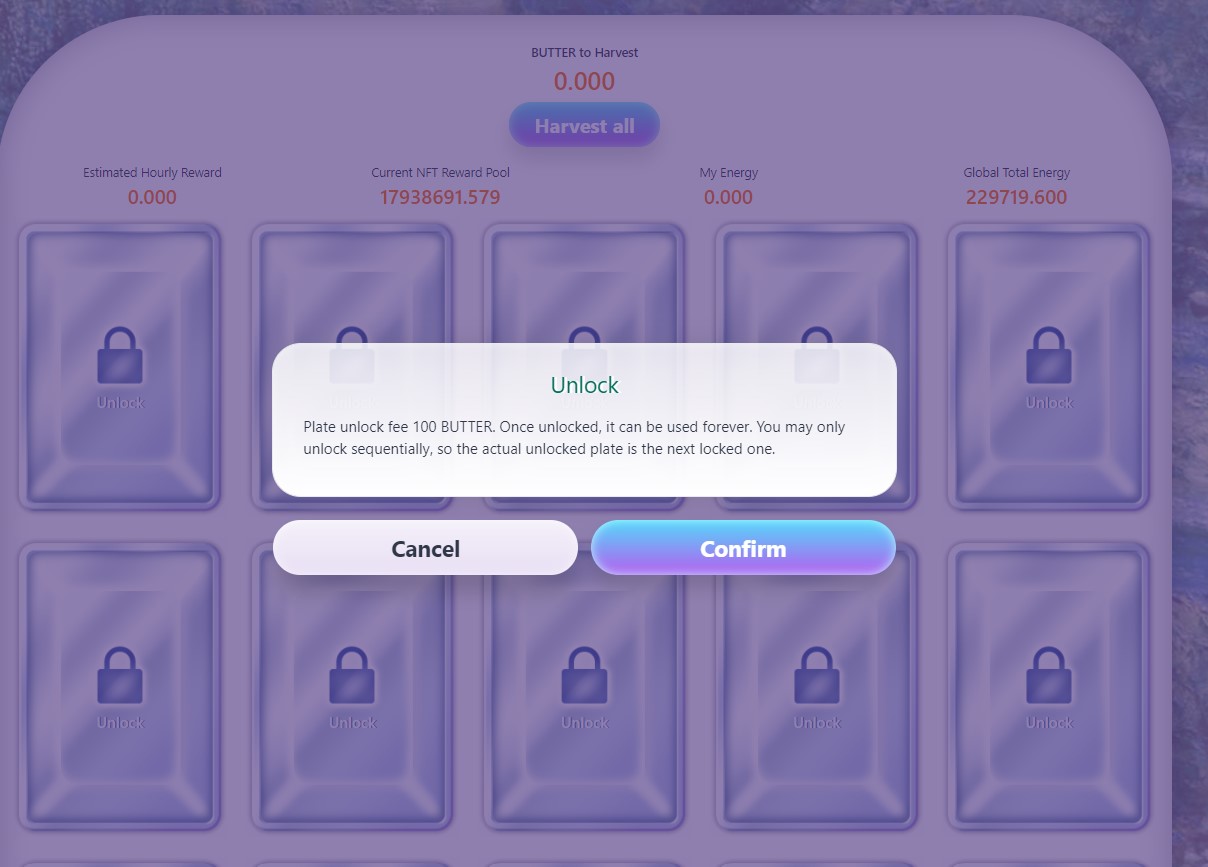 Once unlocked, you select your NFT card and approve it. 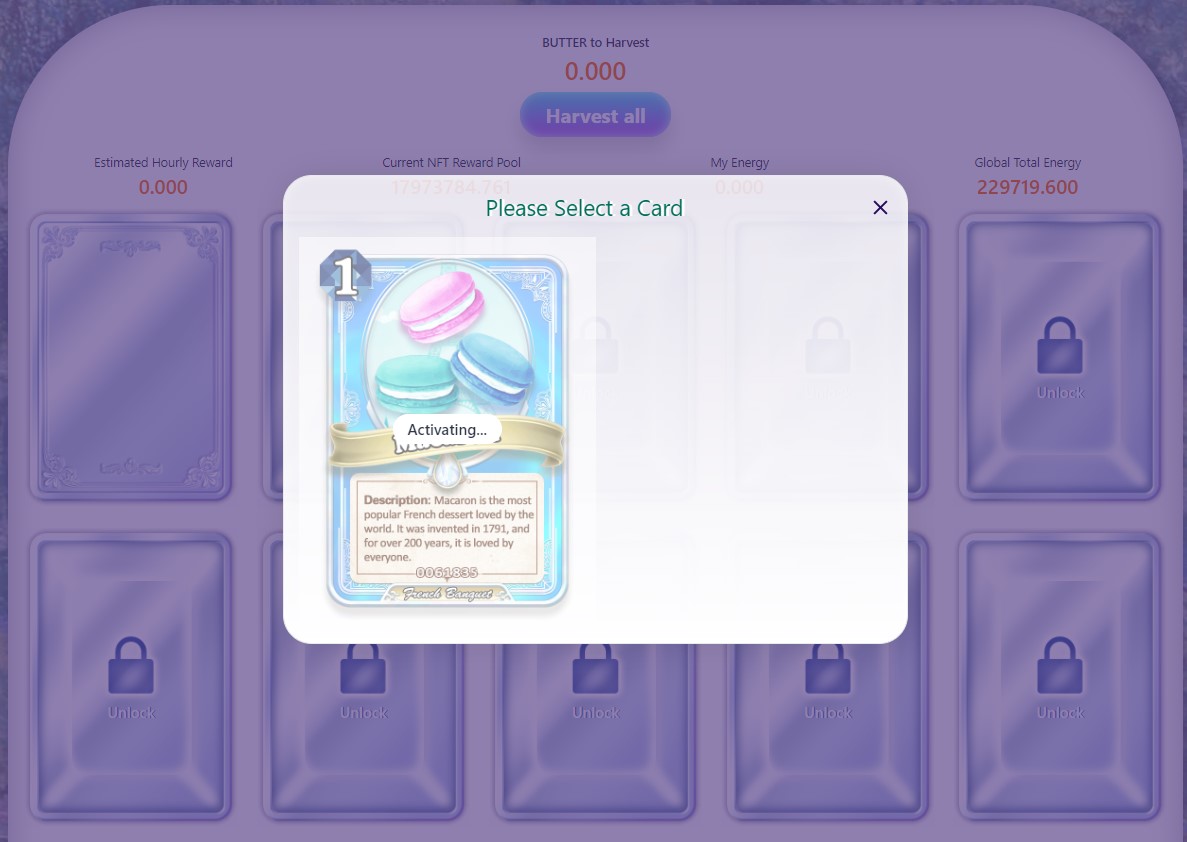 So, staking this one NFT is yielding 0.215 BUTTER/hour. Looks like there is a 15 day stake period. I'll honestly just leave them staked forever. Lifetime rewards, son. 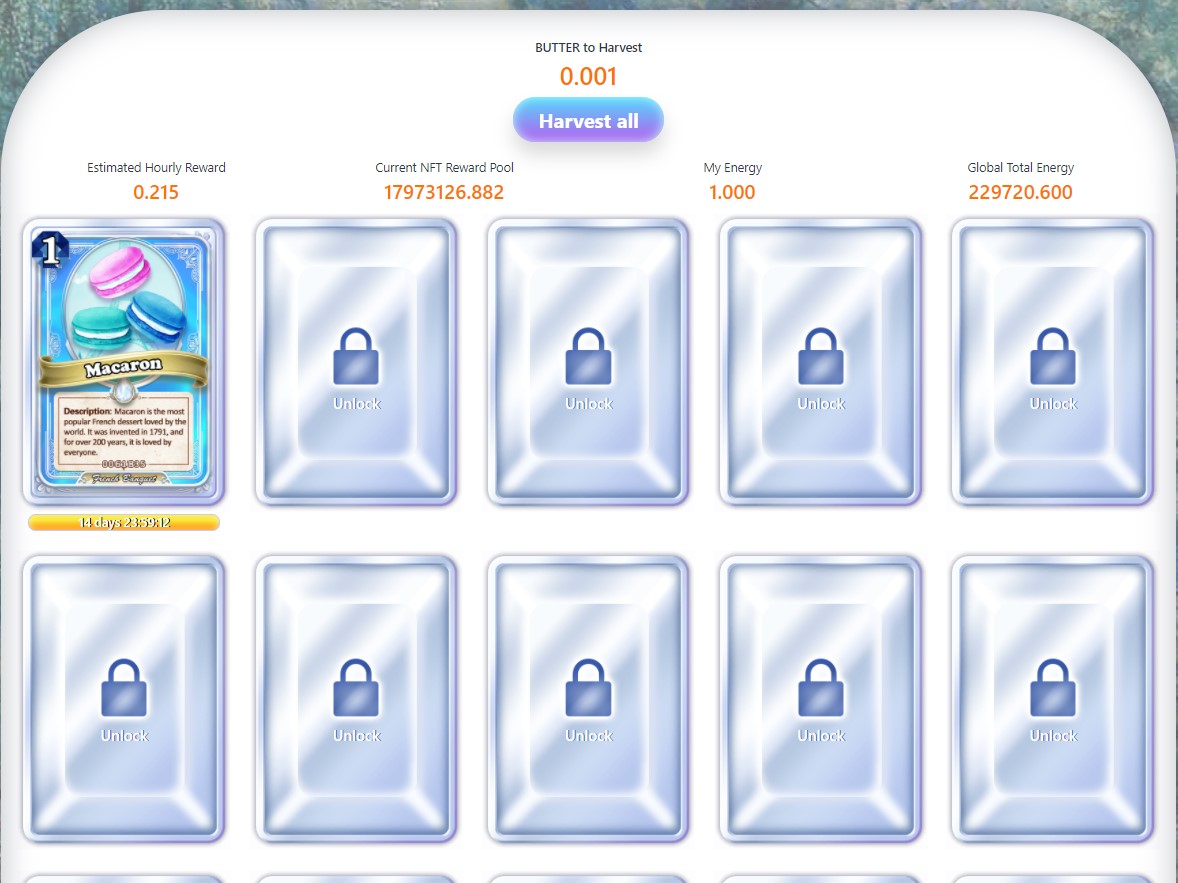 If you end up with an NFT you don't want there is also an auction system where you can list them. 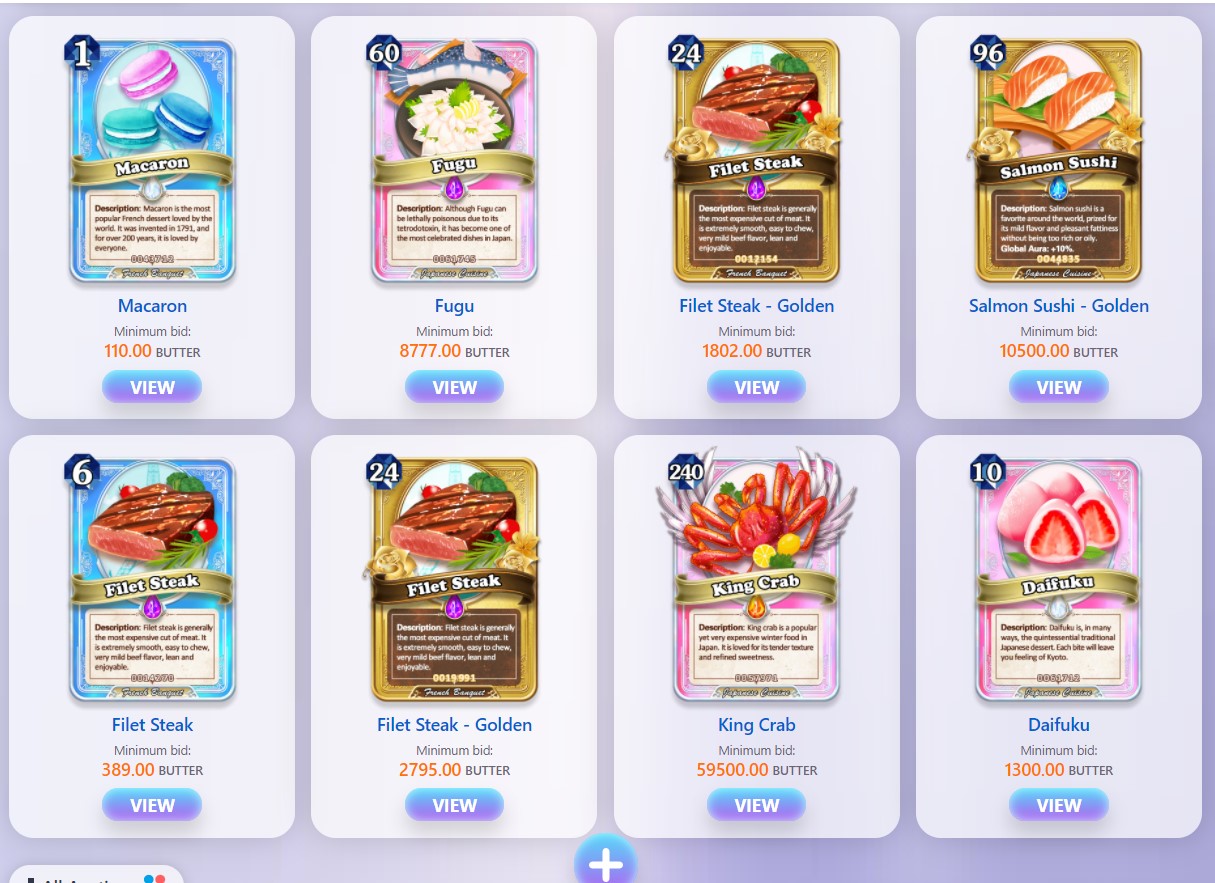 I honestly have no idea what this is. It seems to be another solo staking pool but I have no idea how it works. If you happen to know, I'd love to learn. 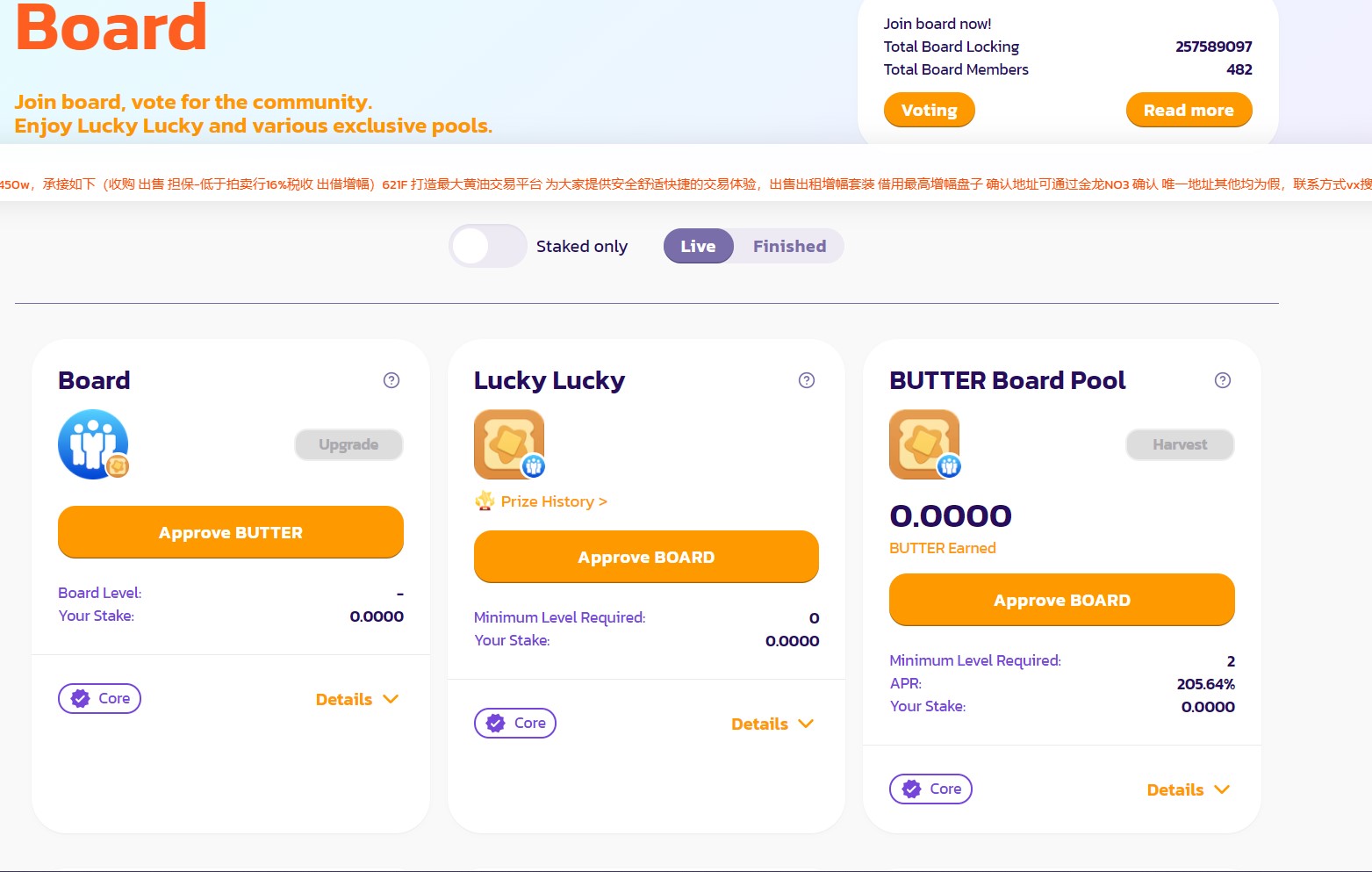 That's ButterSwap. If you wanna try it out, click here to start swapping and farming.

I had a great experience using it and I'm sure it will continue to improve over time. I'll be soaking up my BUTTER rewards and hopefully not increasing my cholesterol at the same time.

Thanks for reading. Lemme know what you think.

I don't know how, but a few days ago I was placed in a telegram channel called ButterSwap GLOBAL ... now I know what it is, thanks for your post.