If you follow me, you might know that I've written about Alien Worlds a number of times in the past. Alien Worlds is a play to earn game on the WAX blockchain that integrated Binance Smart Chain a few months ago and enabled Missions.

Alien Worlds is the first game I ever played on the WAX blockchain. It was more of a proof of concept than an actual game in the beginning. All you were able to do in the initial phase of the game was mine the in game cryptocurrency Trilium TLM. You equip mining tools which are NFTs that each affect your mining in different ways with their attributes, then you pick a planet/plot and mine. Mining consists of clicking the Mine button and confirming the transaction to get your reward of TLM. Because the game runs on WAX, there are no transaction fees. TLM is one of the game cryptocurrencies that has actually held a pretty steady value around $0.18 but recently dipped like the rest of the fucking market to around $0.10. Either way, you can earn it for free every day. For me with my current mining setup (I spend so much WAX on it back when the game launched) I can mine every 10 minutes and earn as much TLM as I can stand to mine every day. I don't mind at all because it's pretty passive. I keep the game open in my sea of browser tabs and click mine every time I think about it. Now, there's another way to earn even more TLM and free NFTs along the way. 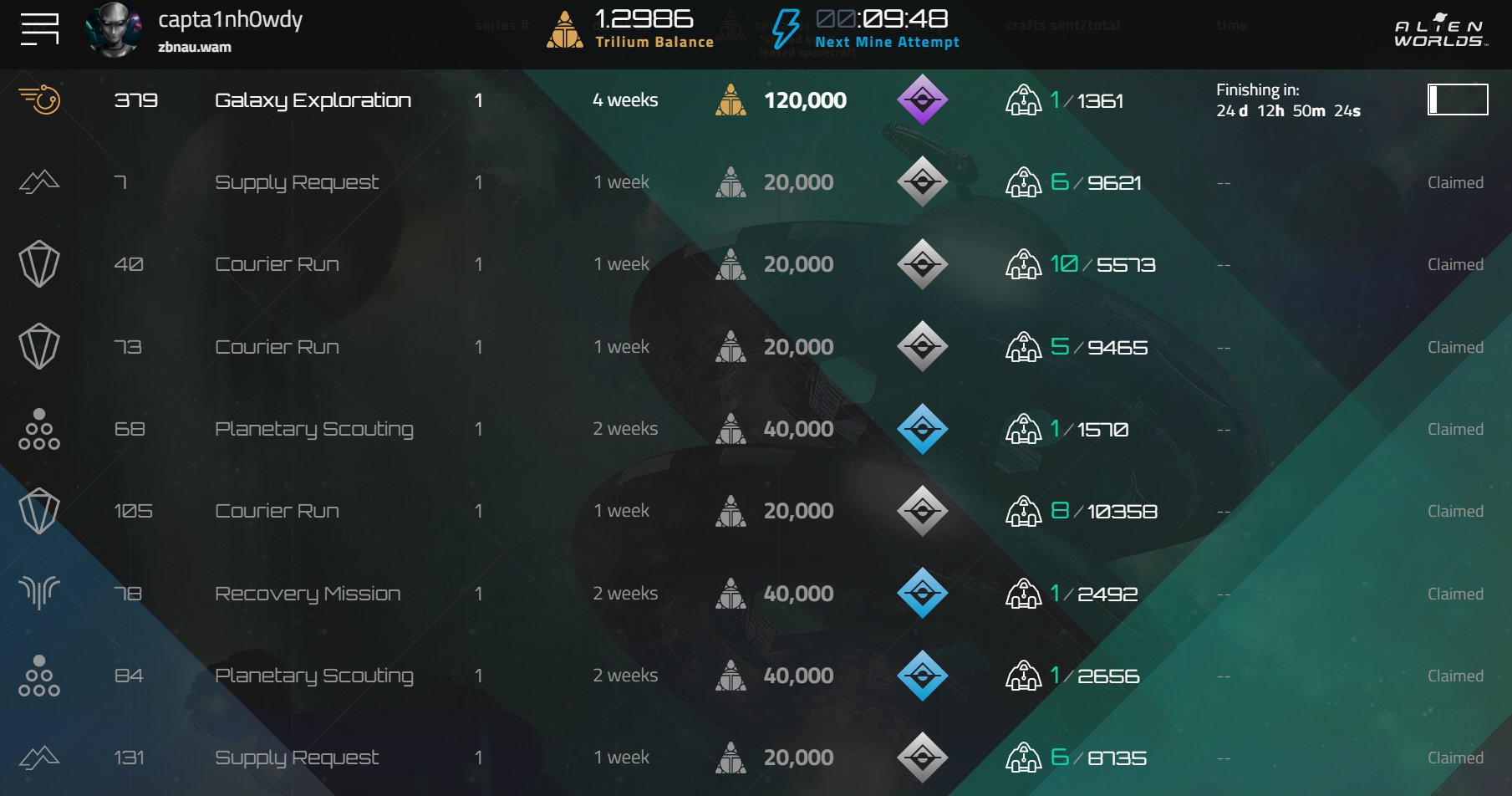 As you can see in the image above, I've completed quite a few missions. Basically what missions are is staking TLM. Each type of different type of mission has a different amount of pooled TLM rewards. You lease spaceships to send on the missions and then when the mission ends, you claim your reward. Each mission type has an NFT rarity that determines how long the mission lasts as well. Some are 1 week, some are 2 weeks, and some are 4 weeks. There's a longer one but I haven't had enough TLM to send a ship on one of those yet. When you click the mission, it tells you how much each space ship cost for the mission and you enter how many you want to send. Then you wait. Passive income. For example, if you look at this Battle Deployment mission, each ship was 1000 TLM. I earned a reward of 109.89 TLM in 4 weeks. In roughly 4 weeks of having my 1000 TLM staked, I got a return of 10.9%. That's pretty fuckin good. over 2.5% per week. I also earned an Epic NFT that will be useable later on in the game. 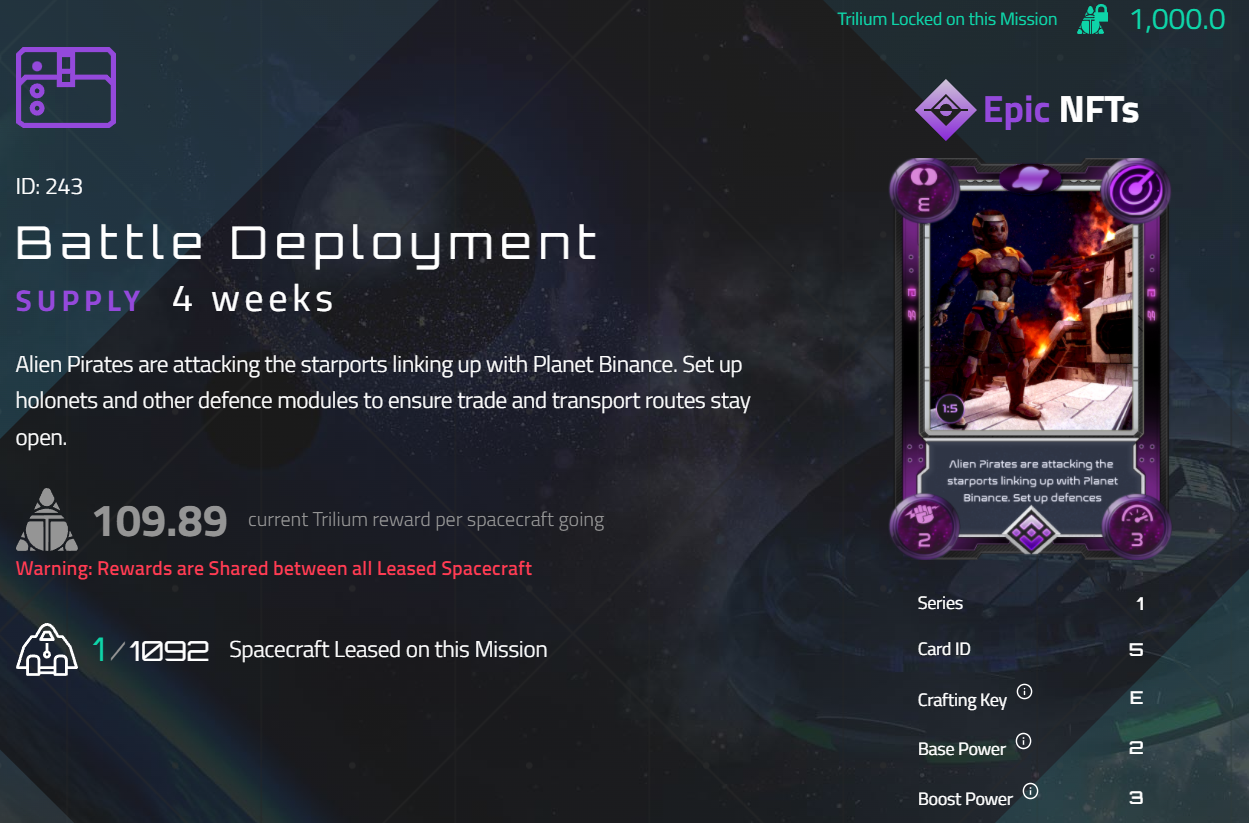 Thinking about a return of nearly 11% in 1 months is pretty wild. Take this over the course of 12 months if you did one of these per month, that's a return of over 130%. This percentage is subject to change though, because it is based on a limited rewards pool. The amount you earn is based on how many space ships you send and how many total space ships are sent. That total reward is divided amongst all that participate. Name another solo staking pool that will give you that kind of return that's not sketchy as fuck. I'll wait. 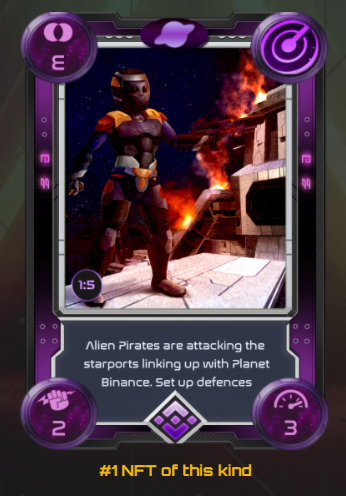 Over the course of doing these missions, I've started a pretty good collection of NFTs that are going to be integrated for future missions. Exactly how they will be used is not really known yet but they will buff your mission rewards in some way depending on the NFT. Will they be worth anything? I dunno. Maybe. The point is, along with getting a pretty solid return on staking TLM for missions, you're also earning free NFTs. Hell some land that you mine on like Magor 22:1 also give you free NFTs randomly as you mine. Alien Worlds gets a lot of hate because the development has been slow, but it is still one of the most active blockchain games that exists. I highly recommend it for earning passive and non-passive income. In this market dip, you can scoop up some TLM for cheap cheap and start staking in missions. Build your stack now. TLM is limited and is getting more scarce by the day. Do you play Alien Worlds?

I've been mining for about a year and today got to a total of 300 tlm. Not a good use of time lol but I do it.

Yeah mining isn't very profitable. But it is free. The real earning happens on missions and with 300 tlm you could get a good start

I never really understood the missions when they came out. I'll have to link into it deeper. I didn't know I could do it with so little tlm

Alien Worlds is a play to earn game on the WAX blockchain that integrated Binance Smart Chain a few months ago and enabled Missions.

In your opinion, does Alien Worlds still offer the best WAX to BSC bridge?