@khaleelkazi 80
about 1 year ago
LeoFinance

LeoFinance has been expanding our operations in a lot of ways. Hiring on new developers, finding new means of organization and all sorts of other organization-level upgrades for the management of LeoFinance as a project.

Recently, we announced on Twitter that we're putting in two new community leaders:

The Growth Lead for our LeoFinance marketing initiatives is going to be announced this week. She's already starting to take over a large number of operations including (but not limited to):

So far, we've got a great start. We're starting to implement more things for her to take the lead on and I'm excited where we go from here.

In this clip from the AMA, Mitch and I just go back and forth a bit about Tik Tok and our new strategy and process for uploading content there - which is all aimed at bringing potential users back to LeoFinance.

That's great marketing, I think if we can attract a lot of new users we can do it with these new age platforms and I can see leofinance is taking that lead. Good times ahead

Attracting users is the first step in the process. Giving them a reason to stay here is the other.

We all need to ensure the second is offered. To do this, we have to make it as appealing (engaging) as possible.

We need both ends of the funnel covered: getting people onto the platform and then giving them a reason to sign up, engage and stick with it

Tok-tok has a massive reach and when people notice leofinance definately it helps in increasing its popularity. However, what about the nations where tik-tok is banned. I see Indian will never able to make use of this tik-tok marketing, as the app is banned...is there any other way to keep influencing people....we have #chingari app just like tok-tok, but the recently launched there own #Gari token.

Great to see more focus been placed on marketing. This is one aspect we really need in order to create more awareness and attract more users to the leofinance project. I trust this is in good hands and hope to see our numbers and reach grow in this space

You post like it is in the hands of others. We all have a part to play in this.

That is the change in concept. People on Leofinance who hold LEO need to take ownership of what occurs here.

True that. We all indeed have a part to play in the success of this project

And we all benefit from it. That is what being a stakeholder is all about. 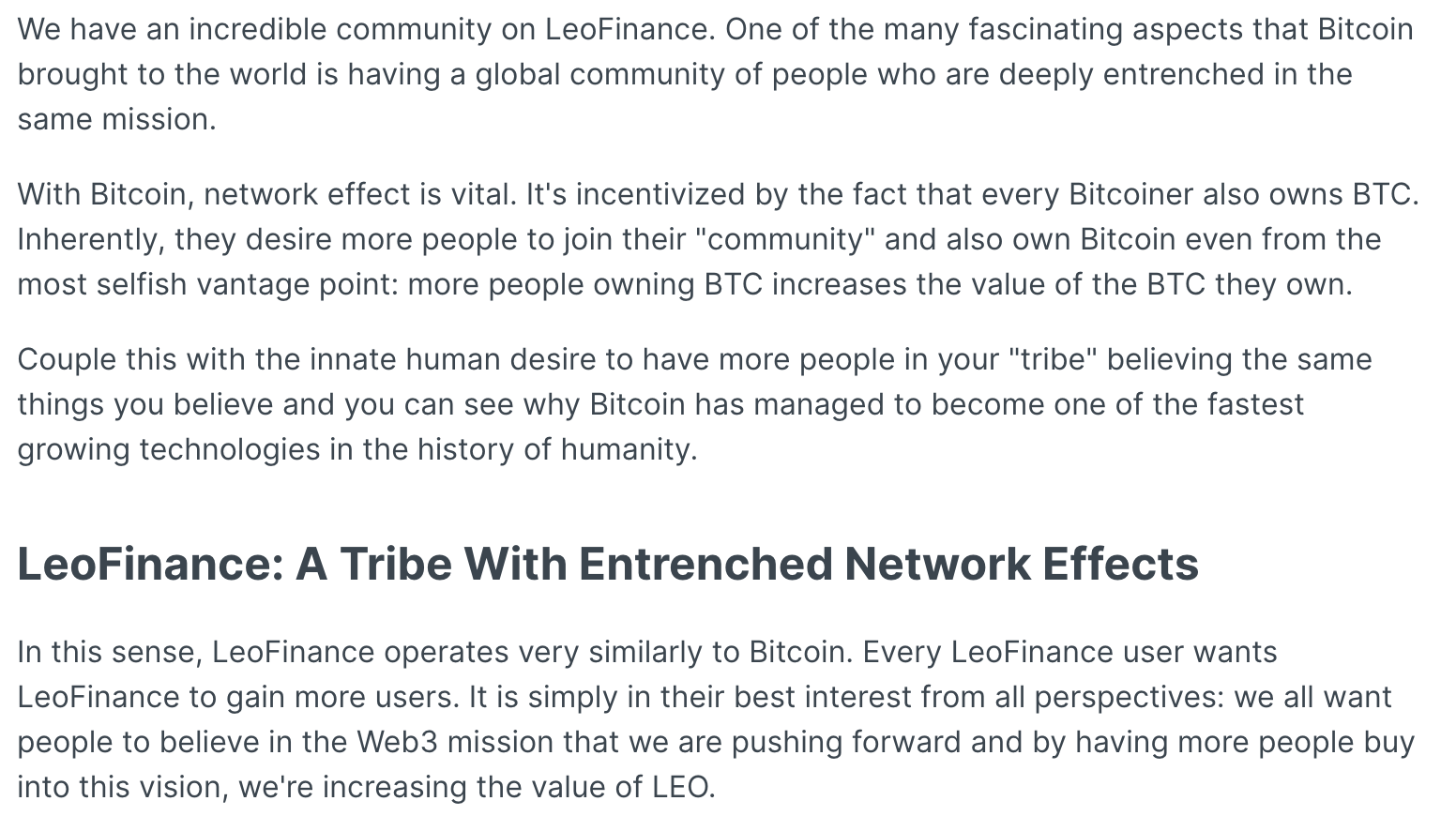 You are 100% right @taskmaster4450le... As it is written in the Whitebook, which will be released by tomorrow's AMA!

@ehizgabriel 58
about 1 year ago (Edited)

LeoFinance has been expanding our operations in a lot of ways. Hiring on new developers, finding new means of organization and all sorts of other organization-level upgrades for the management of LeoFinance as a project.

Its a great deal creating awareness in all social media's so more people can feel the benefits of #LeoFinance. As it seems, #LeoFinance is always one step ahead but it certain its getting there.

Leopedia can do a lot if it starts to become a major resource. The ranking of something like that could be very helpful.

Tiktok is leading video based social media platforms and it's a great idea to use for Leo finance to use it for more action. Overall it's a good idea to ha e presence on alternative social media to bring more onboarding and bring more people from web 2 to web 3.0

Just one of the many initiatives that are taking place. We need to keep expanding in all directions.

For this, the LEO holders need to step up. Having a few core people doing everything is not going to work.

Still far too many who look at things like it is the responsibility of others.

To get your product seen, it must be marketed. Great job on going deep into the marketing of $LEO. I trust that this will give $leo more traction.

If an work opportunities to work in LEO Finance, I am ready like handling social media, cross posting being mod etc.

Love to see that.

You guys are working hard for the promotion and service of the community. Needs more marketing to compete other large organizations. Wish you best of luck Khalil bro.

You are really doing great on how you are putting a lot of effort in marketing Leofinance. I wish more of us can do this to make it easier and better

Everyone can. Support the initiative with upvotes and comments on traditional social media. Start to spread around posts you find interesting. Hell share this video on some other platforms.

To be successful, it is going to take numbers. A few core people putting things out is not going to get it done.

This is a very good one and nice way of building Leo finance platform too.

Tik tok definitely is a unique and unusal way to promote. But still I feel its more for niche markets. Tik tok hasn't a stand in all the countries. For somethong with as diverse target audience as leo, I feel Insta is a good bet. Insta is a place where more of educated, young and liberal users flock around. They are more susceptible to change and won't mind the learning curve as much as users at facebook would. Moreover tik tok clips can always be published as insta stories. True, Insta marketing is a bit harder than others. And requires probably more work. As you are supposed to convey most of things with graphics. But it seems worth it.

But anyway, any step is better than taking no step. And I wish leo all the very best in its future endeavors and with their marketing goals.

TikTok is a good way to send a message within seconds.
My profile was unfortunately deleted some time ago, apparently they had something against the rewards on LeoFinance and its indirect advertising.

I will be so happy if am hired for something involving leofiance..Not a coder by the way,but i can help in other ways

Outreach comes in many forms. We need to tighten everything up and keep expanding. This is a community initiative with anyone who is holding LEO as a vested party.

It is a point that we need to keep driving home, especially to newer people. Climb on board and get active. It can be on chain, using Leofinance.io or Leo Mobile. Or it can be by supporting or expanding the marketing initiatives on traditional social media.

Well marketing is good obviously for any brand, business, or initiative but I am curious what the plan is for marketing on TikTok because I know that a lot of the people on Tiktok want exciting and eye-catching content.

I just wrote that hive needs a tik tok presences. It's the #1 platform right now and it make products and projects that use it strategically.

I may have to finally create a tik tok channel.

Congratulations @khaleelkazi! Your post has been a top performer on the Hive blockchain and you have been rewarded with the following badge:

More grease to her elbow! ( the growth lead).

Leofinance seems like an awesome community and I love how they are putting effort to ensure the progress of the community. I'm still exploring hive, I think my next destination should be #Leofinance

Growing the Leo team is great Khal, but are you also making sure they've got clear direction, constant communication/feedback and consistent compensation for their effort?

Leo Finance hast started a few marketing efforts like podcast, weekly curator meetings, outreach to projects on Polygon, Play-2-earn guilds, Leo Shorts... that have vanished into the the ether, not because they're bad ideas, but because ( in my opinion) We've dropped the ball with management.

I applaud what you're doing, but are you able to manage people when you're so focused on development?

Something to think about.